In a nutshell – Summary 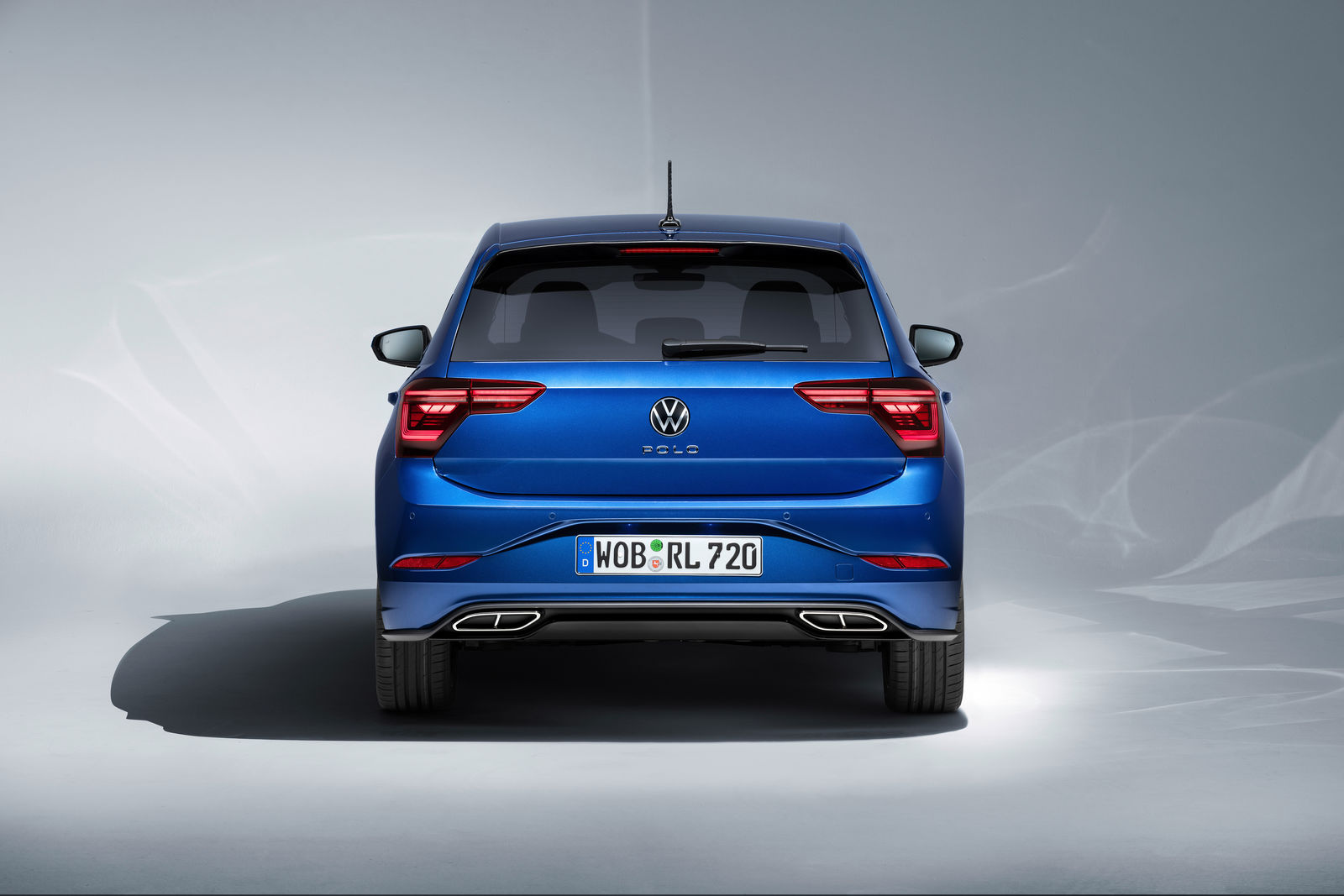 The Polo: built in Pamplona, Spain and Uitenhage in South Africa, it will soon be on its way to countless markets across the world. With more than 18 million units built, the Polo is one of the world’s most successful compact cars. The Polo may be small in size, but it is one of the greats of the Volkswagen brand: for years, it has been regularly claiming a place among the top three best-selling model series. Now the Polo has evolved once again. The design, technologies and specification matrix of the bestseller have had a comprehensive update, as is immediately obvious when you see the vehicle’s new front and rear. The bumpers and boot lid have been given a new look, as have the headlights and tail light clusters, which now come with LED technology as standard. Thanks to the new lighting design, this Polo has a particularly charismatic daytime and nighttime signature. And for the first time, this striking signature includes an LED light strip along the radiator grille crossbar – this is in conjunction with the IQ.LIGHT LED matrix headlights (optional/dependent on specification package), which are also new for the Polo. In this regard, the new Polo takes its cue from the ID models as well as the new Golf and Arteon – these were the first Volkswagens to have an LED crossbar at the front. Moving to the interior, the Polo boasts the Digital Cockpit, now fitted as standard, a redesigned multifunction steering wheel which likewise comes as standard, and new-generation infotainment systems including the online control unit (eSIM) and App-Connect Wireless (both dependent on specification). Customers who opt for Climatronic in their Polo will now be able to operate the automatic air conditioner via touchscreen, as is also the case in larger models like the Tiguan, Passat and Arteon.

IQ.DRIVE Travel Assist is optional, Lane Assist comes as standard. From a technical perspective, too, this compact four-door model has strong similarities to Volkswagens in the higher segments. An example: the new Polo is the first vehicle in its class to be offered with the optional IQ.DRIVE Travel Assist feature. This brings together functions including the new predictive ACC (Adaptive Cruise Control) and Lane Assist to create a new assist system enabling partly automated driving at speeds of up to 210 km/h. In vehicles equipped with Travel Assist, the new multifunction steering wheel (which comes as standard) is fitted with touch-sensitive surfaces. These register that the driver’s hands are touching the steering wheel when IQ.DRIVE Travel Assist is activated, thus meeting the requirements for Level 2 on the scale of driving automation within the EU. What’s more, every Polo comes equipped with various assist systems as standard, such as Autonomous Emergency Braking Front Assist, which includes the City Emergency Braking System and now also Lane Assist. The fact is: you’d struggle to find another car in the Polo’s class that offers such an innovative spectrum of assist systems.

Polo, Life, Style, R-Line and GTI. The specification packages have been newly designed and reconfigured. Previously, the Polo was available in the Trendline (basic model), Comfortline (mid-level) and Highline (premium) versions. Volkswagen has done things differently this time, creating a more user-friendly range of versions and integrating the equipment that was most popular with customers into the standard model. The configurator now starts with the Polo version, and continues with Life, Style and R-Line. These versions are set to be launched this spring. And the Polo will be available as a GTI, too: its world premiere is set to take place this summer.

Polo is anything but basic. Kicking things off in terms of equipment is the Polo version. As mentioned above, it now boasts LED headlights, LED tail light clusters, the new multifunction steering wheel and Lane Assist. Another new addition is the centre airbag. Located on the driver side on the side of the rear seat backrest, this airbag opens toward the centre in the event of an accident; it prevents the driver and front passenger from knocking into one another during a crash and thus sustaining injuries. Another new safety feature: a lap belt tensioner that also tensions the seat belt around the pelvis. In addition, Volkswagen has now incorporated the Digital Cockpit (digital instruments with an 8.0-inch display) into the basic equipment. And there is a range of other features that are now fitted as standard: the air conditioning system, the Composition Media audio system with 6.5-inch monitor, a Bluetooth mobile phone interface and exterior mirrors that can be electrically adjusted and heated, electric windows throughout the vehicle, door handles and exterior mirror caps in the main vehicle colour and, last but not least, the highest quality version of the dash panel (with foam inserts). Fresh: the seat covers in Polo design Elegant: the dark interior décor Licorice Black. As you can see – anything but basic.

“Life” is the new golden mean. The next level up is the specification package “Life”. This includes additional standard features such as 15-inch rather than 14-inch wheels, App-Connect, a centre armrest with an additional USB-C port in the middle of the passenger compartment and leather trim on the steering wheel and gear knob. The seats in the Polo Life are upholstered in the high-quality Life fabric; the matching interior décor is known as Lava Stone Black.

Style includes IQ.LIGHT LED matrix headlights. The expanded range of equipment for the Polo Style includes the IQ.LIGHT LED matrix headlights, newly developed and available in this product line for the first time. Originally featured in the luxury SUV Touareg, this interactive headlight technology is a typical example of how Volkswagen makes high-tech systems available in all vehicle classes, thereby democratising both safety and comfort. Other exterior features of the Polo Style include the distinctive front end with chrome-look crossbars, LED fog lights and 15-inch Ronda alloy wheels. The expanded range of functions also includes Park Assist at the front and rear. Inside, there are a range of additional details such as the 10.25-inch Digital Cockpit Pro (including image of caller, Coverflow, map view and Slide Show), background lighting and the 8-inch Infotainment system Ready2Discover, which includes App-Connect Wireless. With Ready2Discover, customers have the option of retrofitting the navigation system as a feature on demand. Stylish: the seat covers in the Style design and the high-gloss décor in Deep Iron. There is also the option to order the seats with exclusive ArtVelours covers.

R-Line with bumpers in R design. Just one look at the new Polo R-Line’s highly individual exterior and you’ll be in no doubt of its sporty character. The bumpers are distinguished from those of all other Polo versions by their striking R design. In the front bumper, the high-gloss black cross and longitudinal bars of the air intakes and their surround convey a unique and charismatic sense of dynamism. Here too, IQ.LIGHT LED matrix headlights and LED fog lights are fitted as standard. A diffuser – once again in high-gloss black – with chrome-look integrated exhaust panels in the lower part of the vehicle rear distinguishes this area from the Polo, Life and Style equipment versions. And the 16-inch Valencia alloy wheels are fitted on the Polo R-Line as standard. Like the Polo Style, the Polo R-Line comes equipped with the Ready2Discover Infotainment system. The Polo R-Line’s seats are upholstered with Karoso fabric in ArtVelours, sporty and exclusive in equal measure; this coordinates perfectly with the interior décor in Dark Grey.

Everything from a sound system to sports running gear. As in the predecessor, the new Polo will be available with a range of optional features, allowing customers to create a Polo that is exactly to their tastes. These include a large tilting and sliding panoramic sunroof, up to 17-inch alloy wheels, a ball coupling, the beatsAudio sound system with a total output of 300 watts, the keyless locking and starting system Keyless Access, voice control, tinted rear windows and a sports package (for Style and R-Line) including sports running gear (vehicle body set 15 mm lower) with electronic differential lock (XDS) and driving profile selection.

Four petrol engines and a natural gas drive. Volkswagen is launching the latest evolutionary stage of the Polo, which is generally front-wheel-drive, with a range of five different highly efficient petrol engines. The petrol engines available as of the launch date deliver 59 kW (80 PS), 70 kW (95 PS) and 81 kW (110 PS). The 70 kW engine will be offered with an optional 7-speed dual clutch gearbox (DSG), while this will be standard for the 81 kW engine. Additionally, the Polo will once again be available as a 1.0 TGI with a monovalent natural gas/petrol drive. The 1.0 TGI generates 66 kW (90 PS). All engines available as of the launch are high-tech three-cylinder engines with a capacity of 999 cm; at 70 kW and above, they are equipped with a turbocharger.