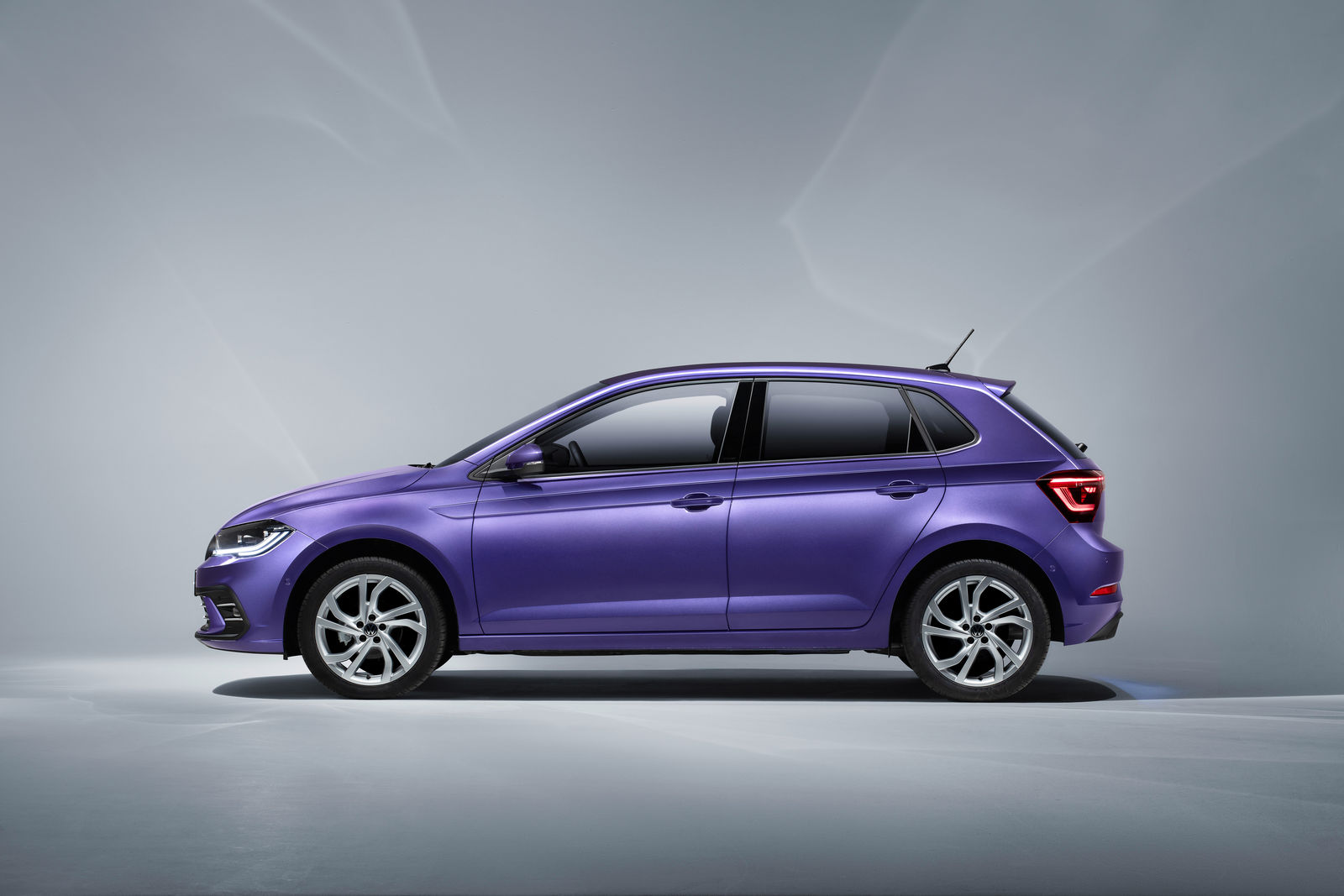 Modular transverse matrix. The technical basis for the current Polo is provided by the state-of-the-art modular transverse matrix (MQB). But unlike the larger models such as the Golf, Tiguan and Arteon, the Polo is based on the MQB A0, which has been perfected for particularly compact Volkswagen vehicles. The MQB offers a range of advantages: an obvious one being the crisp proportions that characterise the look of the new Polo. Underneath the shell, so to speak, we discover the technical advantages of the MQB, including an optimised package (351-litre luggage compartment volume), a high level of body stiffness, excellent crash characteristics and a low body weight.

Long wheelbase. The new evolutionary stage of the Polo measures 4,053 mm in length. A large wheelbase of 2,564 mm stretches between the newly designed front and rear bumpers. This measurement shortens the overhangs, making the car appear powerful and sporty. The Polo is 1,751 mm wide and 1,446 mm high.

Silhouette. The current Polo is a confident compact car, with expressive design that oozes a unique charisma from whichever angle you look at it. From the side, this Volkswagen is characterised by a long and elegant roof line, which flows into a roof spoiler at the rear. A fine line in the side section runs parallel to the roof, serving to visually lower the centre of gravity. Among the iconic Polo details are the long band of side windows, including the rear side window which is integrated into the C-pillar. The precisely cut C-pillar slants forwards, giving the Polo a dynamism that appears to be propelling it forward even as it stands still. Underneath the window line, you’ll find other key design elements: the arrow-shaped double line – known as the tornado line – is a design feature that defines the look of the Polo. The surface of this three-dimensional tornado line projects out slightly in the style of a shoulder section, before finishing with a sharp undercut at the bottom. The upper of these two double lines begins at the C-pillar and extends forward to the wings. The second, lower line forms the undercut; it begins in the three-dimensional LED tail light cluster and likewise runs to the front wings, where it rises slightly to meet the upper line.

Front end. The combination of the radiator grille and the LED headlights – fitted as standard – make up the “face” of the Polo, which extends across the entire vehicle width. And the optional new IQ.LIGHT LED matrix headlights create an especially striking effect. If these are selected, the LED dual headlights combine with the LED daytime running lights to form a unique signature. Two LED strips border each headlight along the lower edge; the upper and longer of these two LED strips is also optically connected with the LED crossbar on the radiator grille, now offered for the first time in the Polo. Strong contours: as for the Arteon, the bonnet runs right down into the radiator grille. Also striking: the new-look bumper, which is likewise designed to emphasise width. In the Polo Style, the two cross pieces in the bumper have a chrome look, and span almost the entire width of the vehicle. Meanwhile, the bumpers belonging to the Polo R-Line in the “R” design are markedly different from those of the other Polo versions: In the front bumper, the high-gloss black cross and longitudinal bars of the air intakes and their surround convey a unique and charismatic sense of dynamism. What’s more, the Polo R-Line and Polo Style are fitted with new LED fog lights as standard.

Rear end. The new Polo comes with newly designed LED tail light clusters as standard. For the first time, these are made up of two sections: as well as the outer main element, there is now a second segment that is integrated into the rear lid. The three-dimensional design of the tail light clusters gives a more distinctive appearance to the rear section and an enhanced sense of quality to the Polo as a whole. In addition, the premium version of the LED tail light clusters includes a dynamic turn signal (“wiping” effect) and a switch function for the LEDs when braking (“click-clack” effect); this function enables the brake lights to be even more visible to other road users. The new Polo R-Line has a unique look at the rear, too: a high-gloss black diffuser with chrome-look integrated exhaust panels in the lower part of the vehicle rear distinguishes this area from the Polo, Life and Style equipment versions.