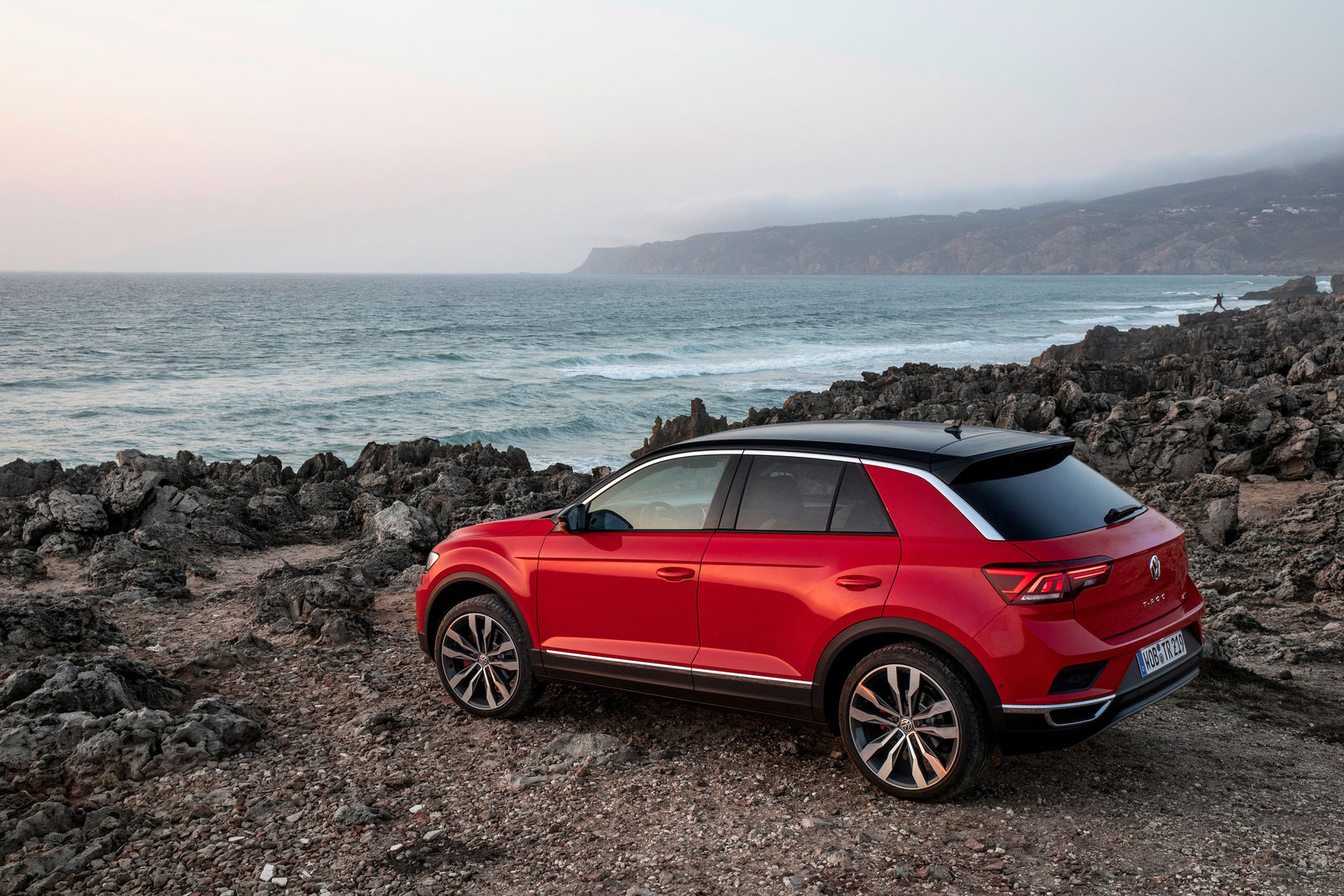 Volkswagen is adding dynamism to the segment of compact SUVs with the new T-Roc. It is a crossover that combines seemingly contradictory aspects: performance and comfort, emotionality and rationality, urban lifestyle and multifaceted all-round properties. These parameters of different automotive worlds merge into a new idea of compact mobility – a sport utility vehicle the likes of which only the inventor of the GTI could develop.

Charismatic SUV. The T-Roc is the new face in the crowd. A versatile vehicle – available with front-wheel or all-wheel drive (with all-wheel drive, including the 4MOTION Active Control driver experience switch, as standard) – which combines the dominance of an SUV with the agility of a sporty compact. A car that is just as much at home in the city as it is on long journeys. On its exterior, crisp dimensions and a progressive design combine with eleven exterior colours, three roof colours and a total of 24 colour combinations. Inside, avant-garde design and a high level of functionality form an alliance. It is a five-seater with 445 litres of cargo capacity (the largest in its segment), seven different colour schemes and a cockpit that offers wide-ranging digitalisation and connectivity. That is because it is the first SUV in its class to offer optional digital instruments in a new generation of the Active Info Display. Together with the glass-encased infotainment systems, it produces a digital viewing and control axis. This fits in well with the new connectivity matrix of ‘Volkswagen Car-Net' with its apps and mobile online services.

Six efficient turbocharged engines. Pre-sales began in September with two petrol models (TSI with 85 kW / 115 PS and 140 kW / 190 PS) as well as a diesel (TDI with 110 kW / 150 PS). Two other TDI engines and a TSI will follow. All six engines have turbocharging and direct fuel injection. The base price for the front-wheel drive T-Roc 1.0 TSI with 85 kW in Germany: 20,390 euros – including the area monitoring system Front Assist with City Emergency Braking and Pedestrian Monitoring, Automatic Post-Collision Braking system and the lane-keeping system Lane Assist. A personalisation function, which is included as standard, can be used to save the settings of the assistance, convenience and infotainment systems. These settings are called up via the vehicle key and are used to adapt the car to the individual driver. The official T-Roc launch begins in November.

Volkswagen SUV campaign. "The T-Roc sets a new benchmark in the booming SUV segment", says Dr Herbert Diess. The Chairman of the Board of Management for the Volkswagen brand continues: "With its functionality, dynamic handling and technology, the T-Roc embodies all good Volkswagen qualities and will further boost our SUV campaign." The green light for the significant expansion of the SUV range was given in 2016, when the second generation of the Tiguan made its debut. Following this in 2017, in the segment above the Tiguan, came the launch of the Atlas, which was developed for the USA. Launched nearly simultaneously was the Teramont – a sibling model of the Atlas adapted for the Chinese market. The new Tiguan Allspace is currently gaining momentum – it is an extended version of the Tiguan that seats up to seven people. Another milestone of the largest SUV campaign in the Volkswagen brand's history will follow in 2018 with the world premiere of the next generation Touareg. Volkswagen will also be expanding its range at the other end of the SUV spectrum with the compact T-Cross, which is positioned below the T-Roc. Another model featuring local zero emissions is also due to be launched as part of the SUV campaign: the I.D. CROZZ. It is the first all-electric SUV from Volkswagen. The I.D. CROZZ is scheduled to launch in 2020.

Four letters, one statement. The T-Roc name is easily recognisable worldwide, and it represents a bridge between two driving worlds. Dr Frank Welsch, Member of the Board of Management responsible for Development: "The 'T' refers to the car's successful frontrunners, the Tiguan and Touareg, whose SUV DNA and strengths have been transferred to the new model – the high seating position, the robust qualities of the body and running gear and the all-wheel drive system that is included as standard for the top engines. The 'Roc' in the name has been derived from the English 'Rock', which stands for the positioning of the T-Roc as a crossover that combines the dominance of an SUV with the agility of a compact hatchback model. This car really rocks the segment – sometimes louder and sometimes more subdued, according to the optional equipment and colour combination selected. It is a new Volkswagen which takes the brand and its owners into the next decade of mobility."

Compact SUVs are the next big thing. The T-Roc will launch on nearly all of the world's key markets. For European markets, the new SUV will be produced at the Setúbal plant in Portugal (near Lisbon). Jürgen Stackmann, Member of the Board of Management of the Volkswagen Passenger Cars brand responsible for Sales, Marketing and Aftersales, comments on the sales markets for the T-Roc: "Nearly 80 per cent of compact SUVs are currently being sold in Europe and China. This type of SUV is also gaining in importance in Brazil, India, Russia and the USA. We assume that over the next ten years the annual global sales volume of these compact SUVs will grow from around 6.4 million units today to around 10.6 million units."

These SUVs are so successful, because they have a very dynamic appearance, a high level of functionality and elevated seat positions while maintaining compact exterior dimensions. In the T-Roc, the driver and front passenger seats are 572 mm above the road; the figure for the rear passenger seats is 618 mm. The new Volkswagen ideally meets the needs of car drivers who are often on the road in urban areas. For instance, the T-Roc targets the single person who enjoys many activities, as well as families who value its flexibility and couples whose children are already on their own. These target groups all want an SUV that is compatible with the urban world, that is fun to drive over every kilometre and whose design makes a confident style statement. The T-Roc meets these needs with its excellent comfort, high seating position, innovative safety systems, flexible interior, high reliability and unique design DNA. The new T-Roc exceeds the boundaries of its class and is advancing to become a contemporary companion in the urban world, which can also handle a family weekend excursion with ease.

Notes:
Features and technical data of production models apply to models offered in Germany. Details for other countries may vary.
The T-Roc is a near-production concept vehicle. All performance, fuel efficiency and emissions figures mentioned in this press release are predicted figures, subject to official type approval, as of September 2017.