In a nutshell – The new Taigo 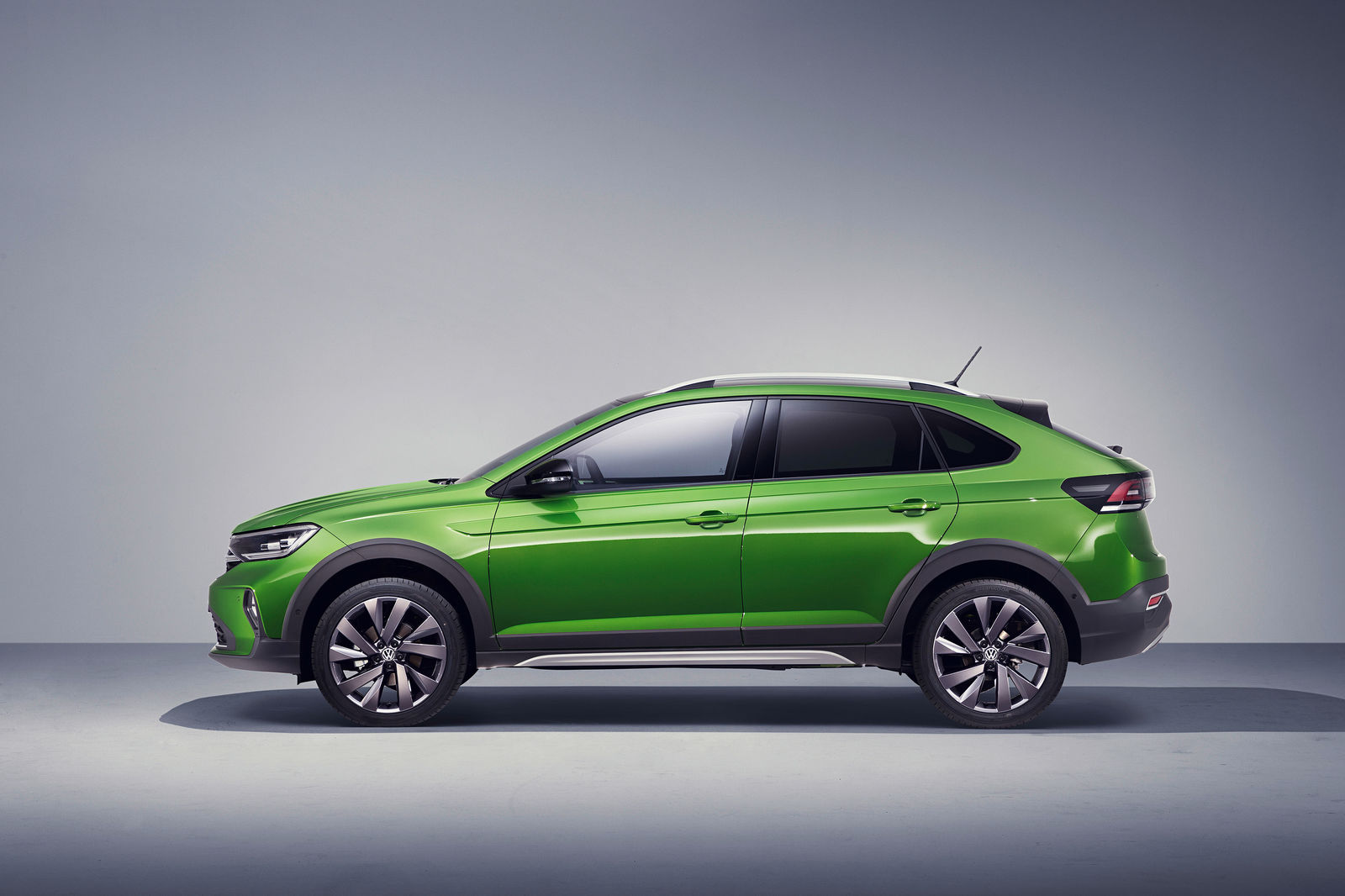 Clear the stage for a strikingly elegant new body shape: Volkswagen has injected fresh style along with a good dose of emotion and individuality into what’s known as the A0 segment. With the new Taigo, Volkswagen is establishing its first SUV coupé in this price-sensitive class. Customers will love its crossover body style, raised seating position, unrestricted suitability for everyday use and a lifestyle feel that is completely new in this volume segment, not to mention extraordinarily high-quality equipment features. The five-seater Taigo slopes backwards at the rear in coupé style without restricting the headroom in the passenger compartment. Volkswagen is thus expanding its portfolio of compact and front-wheel-drive Polo (hatchback) and T-Cross (SUV) models based on the modular transverse kit (MQB) with a third body variant, which was previously almost exclusively reserved for high-priced vehicles. The focus of the Taigo is on design, individuality and emotion. Equipped as standard with full LED headlights, a fully digital cockpit and latest-generation Infotainment systems (MIB3), the almost 4.26-metre SUV coupé sets a new technology benchmark in its class.

On the German market, the new Taigo comes as standard with a comprehensive range of latest-generation assistance systems such as Lane Assist and Front Assist. The model is produced in Pamplona, Spain. Like the Polo and T-Cross, the sporty new crossover will go on sale throughout Europe, with sales markets including 28 EU countries as well as South Africa and Turkey. In Brazil, the Taigo is offered and produced under the name of Nivus, with market-specific variations.

Its design: unique and powerful. Marco Pavone, Head of Exterior Design for the Volkswagen brand, is responsible for the design of the model. Together with his twin brother José Carlos Pavone, Head of Volkswagen Design Center (South America Region), he has already implemented several projects for the brand. When they were students, Marco and José Carlos Pavone were already determined to work in the Volkswagen design team. At the time, they submitted their application with their first design sketches for future cars. Today, around 35 years later, the brothers are in consistent communication about the brand’s latest design developments.

The design of the European Taigo is characterised by powerful proportions. Particularly striking is the coupé-like silhouette, with its strongly forward-sloping C-pillar. Inspired by SUV coupés from higher vehicle classes, it makes the Taigo unique in its segment. The side view is also characterised by very precise and sharp lines, which, together with the large wheels and offset wheel arch cladding, emphasise the crossover character of the Taigo. The overhang at the rear has been deliberately extended to underscore the vehicle’s functionality.

Sporty, lifestyle-oriented, urban and yet robust – even at a fleeting glance, the charismatic Taigo arouses emotions with its unique shape. Volkswagen’s new SUV coupé is mainly aimed at trend-loving, design-oriented young customers and the young at heart, as well as those with an active leisure lifestyle. The luggage compartment volume is an impressive 438 litres. This means that despite its coupé-like silhouette, the new Taigo offers almost as much storage space with full seating as the compact SUV T-Cross with sliding rear seat (385 to 455 litres). The front and rear design is highly distinctive within the A0 model family. All exterior lighting elements from the headlights to the rear lights feature LED technology as standard. Thanks to the new lighting design, this makes for a particularly charismatic daytime and night-time signature. From the Style equipment line onwards, the Taigo features the new IQ.LIGHT LED matrix headlights along with an illuminated radiator grille crossbar as standard. As such, it establishes a link in terms of style with Volkswagen's ID. models as well as the new Golf, Arteon, Tiguan Allspace and Polo – which also feature this characteristic LED light strip as an option or as part of their equipment specification. The striking continuous light strip at the rear emphasises the vehicle’s width and character. In addition, a projection light with an eye-catching honeycomb structure in the exterior mirrors is standard from the Life line onwards.

On the inside, the Taigo features an elaborately designed multifunction steering wheel and modern controls as standard. The infotainment systems are based on the latest generation of the Modular Infotainment Building Kit (MIB3), including Online Control Unit (eSIM) and App-Connect Wireless (depending on the equipment specification). With its puristic interface, the optional Climatronic with touch function is seamlessly integrated in the modern look of the large-format display. The operating panel has touch-sensitive controls and sliders. This is also offered in similar form in larger models such as the Tiguan, Passat and Arteon, thereby underscoring the high quality of the Taigo’s interior.

Partially automated driving as an option with the new Taigo

IQ.DRIVE Travel Assist. In terms of driver assistance, too, the new crossover is very close to the higher-segment Volkswagen models. The new Taigo has the IQ.DRIVE Travel Assist on board as an option: here, the new predictive ACC (automatic distance control with additional reference to speed limits and route data from the navigation system) and Lane Assist merge with other elements to form a new assistance system, enabling semi-automated driving up to a system-dependent maximum speed of 210 km/h. In this case, the new and standard multifunction steering wheel is fitted with capacitive surfaces. These register the fact that the driver is touching the steering wheel with their hands when IQ.DRIVE Travel Assist is active – as defined for Level 2 of automated driving in the EU. Each Taigo is standard-equipped with assistance systems such as the Front Assist environment monitoring system, including City Emergency Braking function and Lane Assist. Few models in this vehicle class offer a comparably innovative range of assistance systems for such a high level of comfort and safety.

Taigo, Life, Style and R-Line. Volkswagen has redesigned its equipment lines across all model series, streamlining them for greater clarity. Features favoured by most buyers such as LED headlights and Digital Cockpit are now integrated as standard in the Taigo – as they also are in the new Polo. Any potential conflicts of choice between individual components are now virtually eliminated based on the new Volkswagen equipment matrix. This makes the range much more clear-cut and less random from the customer’s point of view. For the new crossover model, the configurator starts with the basic Taigo version, followed by Life and then Style and R-Line according to a Y structure. All four equipment lines impress with their fair prices and can be further enhanced and customised with attractive equipment packages or individual extras.

Eight colours and Roof Pack. The new Taigo is launched in eight colours – two single finishes, five metallic finishes and one pearl effect finish. All body colours except Deep Black can be combined with a contrasting black roof as a Roof Pack option. The wheel size depends on the selected equipment line and ranges from 16 to 18 inches. The numerous options include a large panoramic sliding/tilting sunroof, Digital Cockpit Pro with 10.25" display, ArtVelour seat covers, voice control, Black Style design package for the R-Line and the ‘beats’ sound system with 300 watts and 6 speakers. The amplifier is housed in the spare wheel well in order to save space, so the luggage compartment still offers unrestricted versatility (Varibo function).

Two three-cylinders and one four-cylinder. Volkswagen is launching the Taigo as an essentially front-wheel drive model with highly efficient petrol engines, generating 70 kW (95 PS), 81 kW (110 PS) and 110 kW (150 PS). The maximum speed is 183 km/h, 191 km/h and 212 km/h respectively. Depending on the engine, gears are changed manually by means of a 5-speed/6-speed manual gearbox or via a 7-speed dual clutch gearbox (DSG). The economical and low-emission TSI petrol engines make an important contribution to the transition towards environment-friendly vehicles.