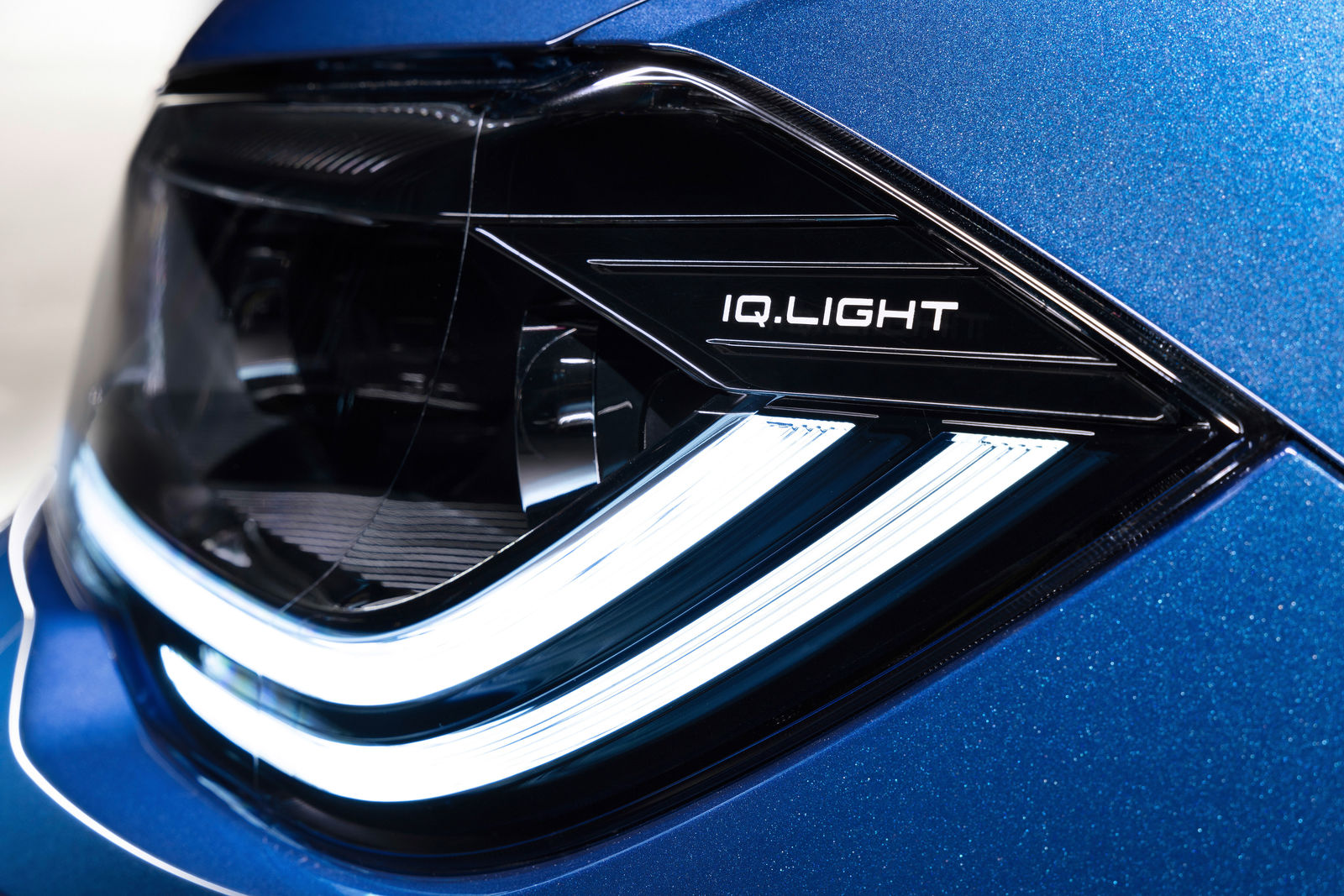 IQ.LIGHT LED matrix headlights. Polo drivers will now be able to benefit from a new evolutionary stage of vehicle lighting: the IQ.LIGHT LED matrix headlights. Volkswagen first used this headlight system in a similar form in the Touareg, a much larger car. Following in the tracks of the Touareg, Passat, Golf and Tiguan, the new Polo is the fifth Volkswagen to feature this LED lighting system. Using a matrix of eight LEDs in each headlight module, different light functions – some of which are interactive – are activated and projected onto the road surface.

IQ.DRIVE Travel Assist. Volkswagen is bundling its systems for assisted driving under the umbrella brand IQ.DRIVE. The new Polo takes assisted driving one step further with IQ.DRIVE Travel Assist – the first time that this system has been available in the product line. The system can take over steering, braking and acceleration of the compact Volkswagen at speeds starting from 0 km/h (with dual clutch gearbox) or 30 km/h (manual gearbox) and going up to the car’s maximum speed (the driver remains responsible for control of the Polo at all times). To do this, the system relies on functions including Adaptive Cruise Control (longitudinal guidance) and Lane Assist (lateral guidance). The driver activates the system by pressing a separate Travel Assist button on the new multifunction steering wheel. The driver has to keep their hands on the steering wheel even when IQ.DRIVE Travel Assist is active. The Polo’s electronics detect this via new touch-sensitive surfaces on the steering wheel. This touch detection is a great deal more reliable than the steering angle-based system of the predecessor even on long and very flat stretches of road.

Predictive ACC. The latest generation of Adaptive Cruise Control (ACC) works together with the DSG and navigation system to proactively take into account local speed limit information, town boundary signs, junctions and roundabouts. To do this, the assist system uses the signals from the front camera as well as GPS and map data. The ACC is an example of how even familiar assist systems are constantly evolving and becoming more intelligent. Moreover, when the system is combined with DSG, the Polo with ACC can be automatically slowed to a standstill behind a stopping vehicle. ACC operation will resume automatically in the Polo once the driver re-enables it.

Side Assist plus Lane Assist and Rear Traffic Alert. The new Polo is offered with the Lane Assist lane keeping system as standard. If the Volkswagen is ordered with the optional driver assist system package including Side Assist, these two systems merge. Also on board in this case are the Rear Traffic Alert, the proactive occupant protection system and Front Assist including Cyclist Monitoring. The driver assist system package can help to prevent serious accidents, particularly in the following two situations: Firstly: on the motorway, where it is able to detect vehicles overtaking quickly as well as slow vehicles in the blind spot. It then warns the driver and, using Lane Assist, will even actively countersteer. Secondly: when reversing out of a parking space, as the sensors are even able to detect vehicles that are approaching from the side and are not yet visible to the driver.

Autonomous Emergency Braking Front Assist. Front Assist, which is fitted as standard, uses a radar sensor integrated into the front of the vehicle to continuously monitor the distance to the vehicles ahead. The system assists the driver in critical situations by preconditioning the brake system, alerting the driver to the need to react by visual and audible warnings and, in a second stage, by a brief warning jolt of the brake pedal. If the driver does not brake hard enough, the system automatically generates the necessary amount of brake pressure to prevent a collision. If the driver does not react at all, Front Assist automatically applies the brakes to give the driver more reaction time. In addition, the system assists by informing the driver if the distance to the vehicle ahead is too short. The latest version of Front Assist being offered in the Polo not only detects other vehicles, but also pedestrians and cyclists who are moving across the driving lane – and not only during the day, but in darkness too. As soon as a pedestrian or cyclist is at risk, the system warns the driver and, in a final stage, applies the brakes to slow down the Polo within system limits. The Front Assist system also includes the City Emergency Braking function.

Driver Alert System. The Driver Alert System, which comes as standard, detects if the driver has lost concentration and sends them an acoustic warning lasting five seconds. In addition, a break recommendation is displayed in the instrument cluster. If the driver does not take a break within the next 15 minutes, the warning is repeated.

Proactive occupant protection system. If the proactive occupant protection system detects a potential accident situation – such as when hard braking is initiated by an activated brake assist system – the seatbelts for the driver and front-seat passenger are automatically pre-tensioned to ensure the best possible protection via the airbag and belt systems. If a highly critical and unstable driving situation is detected – such as severe oversteer or understeer with ESC intervention – the side windows are closed (except for a small gap), as is the sliding sunroof. Background: with the windows and roof nearly closed, the head and side airbags are able to provide optimum support and thus be as effective as possible. As this system is offered in the Polo in conjunction with the standard Front Assist function, the proactive occupant protection system also detects situations in which the distance to the vehicle ahead is critical, and it helps to shorten the vehicle's stopping distance. In hazardous situations, the driver is given a visual and an audible warning and is also warned with a preventative braking jolt.

Park Assist. Park Assist automatically guides the Polo into perpendicular or parallel parking spaces and can reverse the car out of the latter as well. The system is activated by pressing a button on the centre console. Using the indicators, the driver selects the side on which the vehicle is to be parked. Once Park Assist finds a sufficiently large parking space using the ultrasound sensors (40 cm of manoeuvring room at front and rear will suffice), assisted parking can begin. The driver engages reverse gear and only needs to accelerate and brake (an automatic braking function assists in case of insufficient space). The car handles the steering.