Interior – Ample space for life on the move 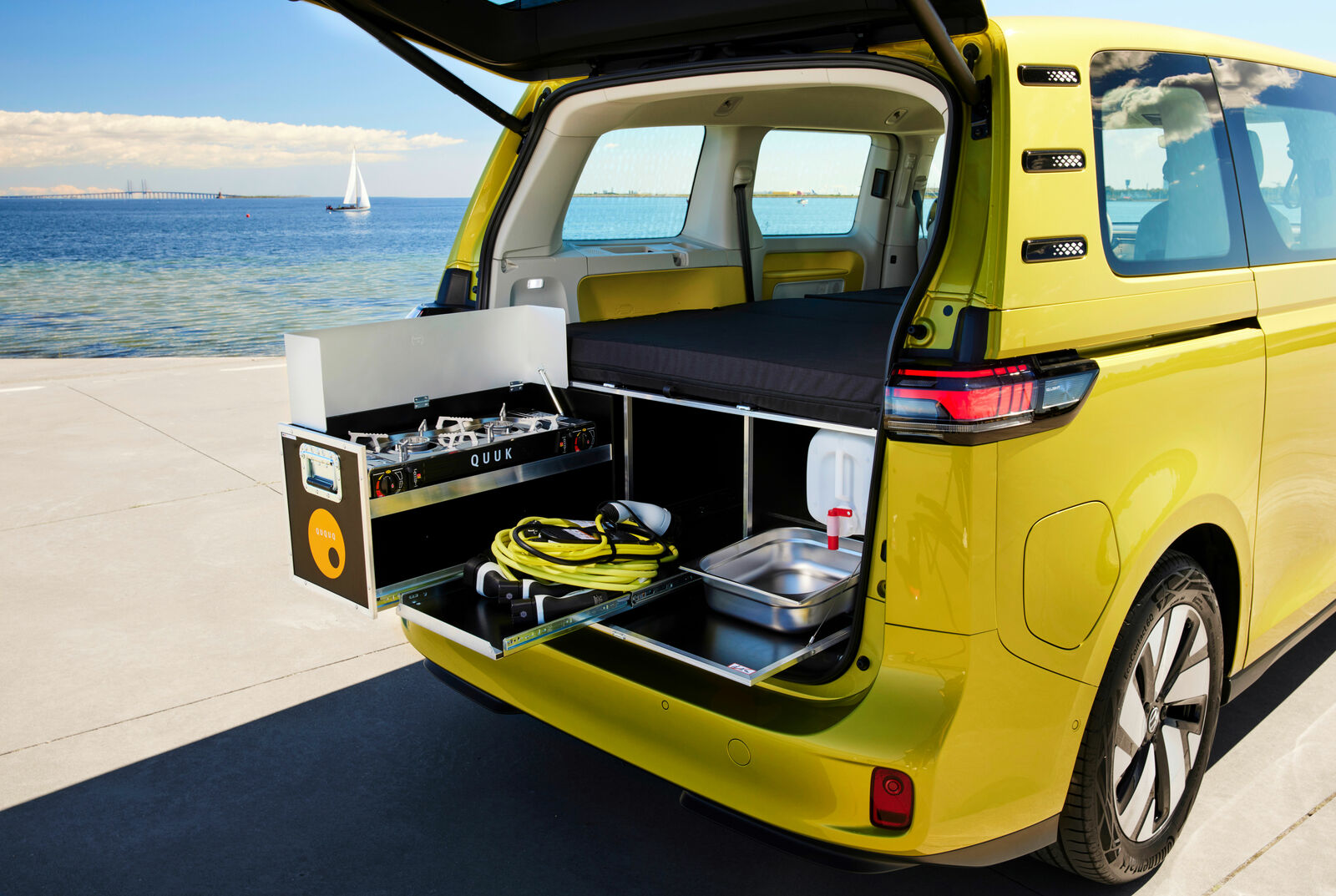 The ID Buzz passenger and luggage space. Driver and front-seat passenger sit in the five-seater ID. Buzz on individual seats equipped as standard on the inside with adjustable armrests. In the higher specification versions, the front seats have armrests on the outside too. The top versions of the seats are completely electrically adjustable and have both a memory function and massage function. The front seats can be individually adjusted by up to 245 mm lengthways and 61.5 mm in height. Used in the back is a triple bench seat, the backs of which can be split 40:60 and folded down. To create extra legroom or additional luggage space, it is also possible to move the rear bench seat lengthways by 150 mm, either in its entirety or split 60:40. The MPV’s two sliding doors come as standard. As on option, they can be opened and closed electrically, just like the rear hatch. What opens up beyond the latter is – with five people on board – 1,121 litres of luggage space (loaded up to the top edge of the backs of the second row of seats). If the second row of seats is folded down, the load capacity increases to 2,205 litres. The five-seater can take a load weight of up to 529 kg.

The ID. Buzz Cargo passenger and load space. The ID. Buzz Cargo is being offered as standard with three seats in the cab: driver’s seat plus double bench seat. Alternatively, the ID. Buzz Cargo can also be ordered with an individual seat for the front-seat passenger. Behind the seats comes a fixed partition, separating off the cargo space. This partition is optionally available with a window and/or an opening through which items can be loaded. The cargo space capacity is 3,900 litres and provides room for two Euro pallets. The maximum payload of the ID. Buzz Cargo is 648 kg. Loads can be secured via lashing rings in the floor and rails on the side walls. The ID. Buzz Cargo is fitted with a wide-opening rear hatch and a sliding door on the passenger side. The van is optionally available with an additional sliding door on the driver’s side and with rear wing doors.

Optically floating displays. Getting into the new ID. Buzz means getting up into it. Typical of a Bulli, it has a high, comfortable sitting position. It was that way already in the T1; is that way in the T6.1; is that way in the new Multivan; and is now also that way in the ID. Buzz. Tailored to that, the instrument panel of the new MPV and van also has a very elevated position. That too is typical of a Bulli. All indicators are digital and are on an ergonomically ideal line of sight. The cockpit in front of the driver is formed by a free-standing display (5.3 inches across diagonally). Positioned centrally in the middle of the dashboard is the infotainment system with a large touchscreen. The standard system for all versions is called ‘Ready 2 Discover’. It has a 10-inch touchscreen. The optional ‘Discover Pro’ navigation system offers a 12-inch screen. Depending on version, App-Connect (including App-Connect Wireless) for smart phone integration and DAB+ (digital radio) are included as standard.

We Connect and We Connect Plus. The ID. Buzz is equipped with an Online Connectivity Unit (OCU), into which a fixed SIM card (eSIM) is integrated. Volkswagen Commercial Vehicles’ latest model utilises the OCU to access the increasingly comprehensive range of online services and vehicle functions of We Connect and We Connect Plus. The We Connect functions are available free of charge and for an unlimited period. With no navigation system the range of We Connect Plus services are included free for a year; with the Discover Pro navigation system the We Connect Plus service is included as standard for three years. The latest We Connect functions include ‘Plug & Charge’, ‘Temperature Guidance’ and ‘Battery Care Mode’. At compatible DC fast-charging stations, ‘Plug & Charge’ facilitates particularly easy charging without a charging card or app. Where there is a forecast of cold weather and the battery is not well charged, the ‘Temperature Guidance’ service provides a reminder to charge it up. The ‘Battery Care Mode’ is a charging function that optimises the service life of the high-voltage battery. If the driver has enabled Battery Care Mode, the upper charge level limit is set to 80 per cent. That preserves the battery. If necessary, for instance on long journeys, the Battery Care Mode can be manually disabled, and the battery charged up to 100 per cent. The ‘Online POI Search’, a navigation function of We Connect Plus, has been enhanced.

In-car shop and in-car apps. In the future, ID. Buzz owners will be able via the infotainment system’s in-car shop to individually purchase and download further apps and/or services. These new apps and services include Spotify and Apple Music, which from now can thus be used in the ID. Buzz even without a linked up smart phone. Simply load the app, register one time with the relevant access details, and you’re done!

Forwards and backwards via intuitive turning. The automatic transmission is operated via a steering column switch: turn it forwards from the neutral position ‘N’ to ‘D’ (Drive) and the vehicle moves forwards. One step further comes ‘B’ (Brake). In this case the electric drive system's regenerative braking is so strong when moving forwards that the driver hardly has to touch the brake – on downhill stretches in particular the ideal Drive mode. One turn back from ‘N’ to ‘R’, and the ID. Buzz reverses.

USB ports with 45 watts power output. The MPV version is fitted out with up to eight USB-C ports: to the right of the steering wheel are two USB-C ports and a tray for a smart phone with an inductive charging function. There is a further USB-C port in the front-passenger door and, dependent on specification, in the rear-view mirror mount. In the back of the ID. Buzz there are USB-C ports in the two sliding doors and on the left and right of the load space. The ID. Buzz Cargo has up to five USB-C ports: one on the left on the instrument panel, two above the smart phone tray, one in the front-passenger door and another in combination with the rain sensor in the rear-view mirror mount. All USB-C ports (with the exception of the 15-watt one in the rear-view mirror mount) use the latest USB Power Delivery (USB-PD) charging standard. Depending on the device connected, they thus give a power output of up to 45 watts. That enables, for example, laptops or rechargeable tools to be charged up three times as quickly as when plugged into conventional USB-C ports. Available as an option, housed within the frame of the front-passenger seat, is a 230-Volt socket for powering larger electrical appliances. Unlike in the case of vehicles with internal combustion engines, the 230-Volt connection in the electric ID. Buzz can also be used with the motor turned off.

Interactive ‘ID. Light’. As is the case for all models of the ID. family, the new ID. Buzz as an MPV also comes with the interactive ‘ID. Light’. The narrow, illuminated strip stretches across in front of the windscreen in the driver's field of vision above the instrument panel. Via the ‘ID. Light’ the driver receives intuitively understandable information. This intuitive recognition and evaluation of the information is made especially easy by the position and colour of the light signal. Two examples: a signal on the right of the light strip indicates, based on colour, obstacles to the right front of the ID. Buzz. The ‘ID. Light’ lighting up completely in red, meanwhile, signals: Beware! Brake! As the ID. Buzz already has the ID. 3.2 Software on board, there are also four new/extended functions: the ‘Local Hazard Warning’ function informs the driver thanks to Car2X of any hazards up ahead, such as broken-down vehicles, accidents, or emergency vehicles. For example, a broken-down vehicle in the outside lane is visualised in the ‘ID. Light’. With Park Assist enabled, the new ‘Intelligent Parking Assistant’ function helps the driver to spot out of the corner of their eye a parking space identified by the system. The ‘Lane Change Recommendation’ function of ‘ID. Light’ provides the driver with early visual notice to change lane in the direction of the visualisation as the next navigation manoeuvre.

Ambient light with up to 30 colours. The ID. Buzz in the MPV version is fitted as standard with 10-colour ambient lighting. As an option, Volkswagen Commercial Vehicles is also offering a 30-colour version. The areas lit up in the individually selected shade of the 30-colour variant are a light strip in the instrument panel, the decorative strips in the four doors, and the storage bins in the doors.

Multifunctional ID. Buzz Box. A new feature developed by Volkswagen Commercial Vehicles specifically for the ID. Buzz is the removable ID. Buzz Box. In its top part it provides a large storage compartment. Integrated in there, always close at hand, are an ice scraper and a bottle opener. At the front there is a flip-open compartment with a capacity of 1.4 litres (e.g., for a water bottle), and at the back a 5-litre drawer for implements of every kind. Another example of the attention to detail in the new ID. Buzz is seen when the drawer is pulled out: embossed on its sides is a map of the world. The van’s ID. Buzz Box is specifically tailored to use at work. In its top section it provides a large compartment for a laptop or clipboard, and a further cup holder. On the front it also has a 1.4-litre flip-open compartment. In the two-seater Cargo and five-seater MPV the box is latched in place between the driver’s seat and front passenger seat. It can be easily and quickly taken out and put back in.