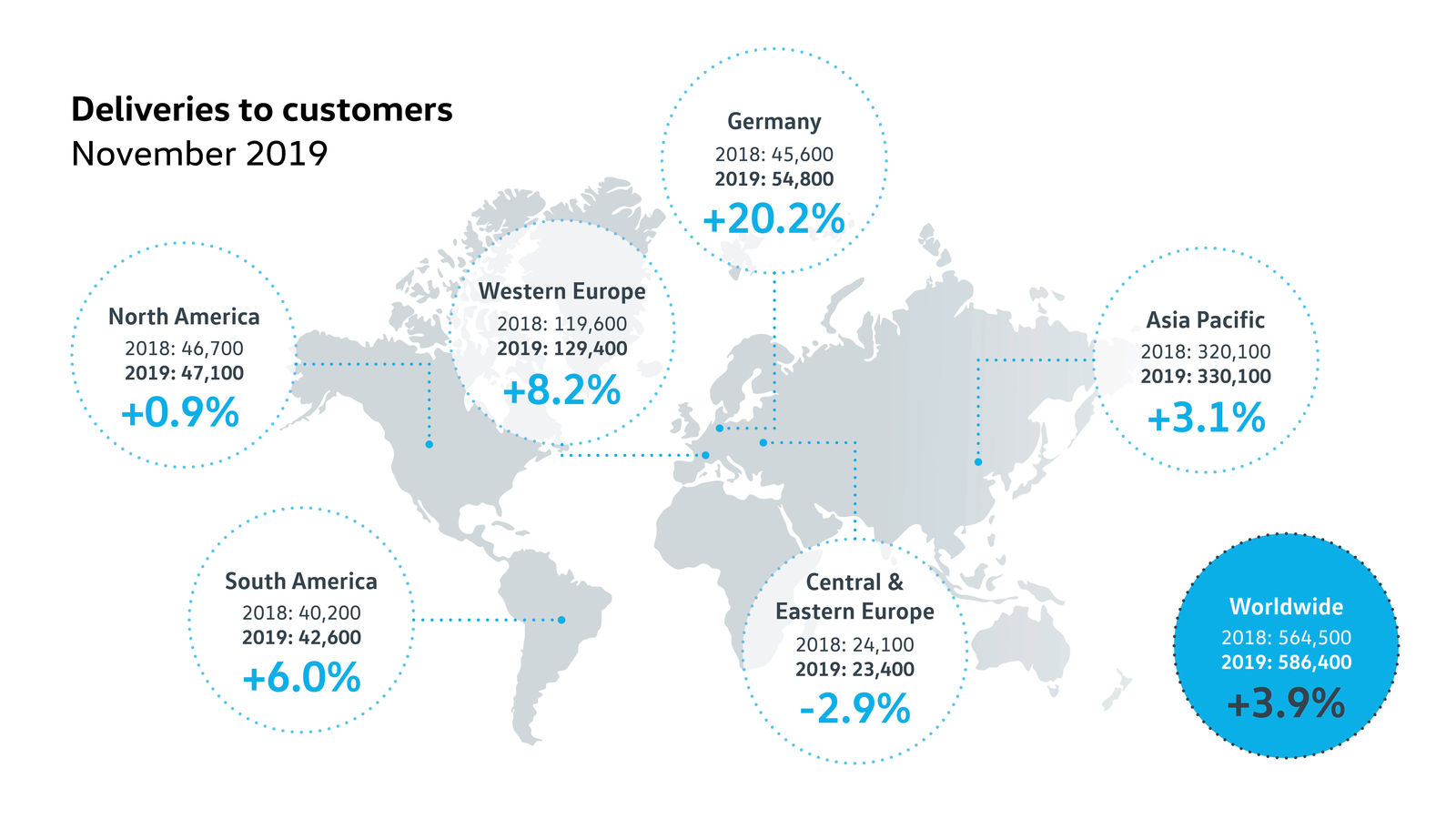 The Volkswagen brand delivered 586,400 vehicles worldwide in November, 3.9 percent more than in November 2018. Volkswagen made further gains in market shares in a shrinking overall global market. That also applies to China, the brand’s largest single market, where Volkswagen grew deliveries by 4.0 percent despite the shrinkage in the overall Chinese market. Significant growth was also recorded in the USA (+9.1 percent) and Brazil (+12.3 percent). Developments in Germany were even more gratifying, with growth of 20.2 percent.

Volkswagen Sales Board Member Jürgen Stackmann: “The Volkswagen brand continues to demonstrate its capabilities even in an overall economic situation that remains challenging. Especially in China, we still see considerable potential following the successful launch of the JETTA sub-brand. We look forward to the final spurt in December - of course we want to continue the positive momentum of the brand.” The deliveries of the brand in the cumulative period are at the level of the previous year.

Deliveries in the regions and markets in November developed as follows:

In Europe, Volkswagen handed over 152,800 vehicles to customers, corresponding to a significant rise of 6.4 percent. In Western Europe, 129,400 vehicles were delivered, 8.2 percent more than in November 2018. Especially in Germany, the brand recorded significant growth, at 20.2 percent. 54,800 vehicles were delivered to customers in the country. The brand was also able to increase its market share.

In Central and Eastern Europe, the Volkswagen brand delivered 23,400 vehicles, 2.9 percent fewer than in November 2018.

Deliveries in the North America region developed positively in November. Volkswagen handed 47,100 vehicles over to customers in the region, 0.9percent more than in November 2018.

In the USA, deliveries rose significantly by 9.1 percent to 29,200 vehicles. This was the best November for the brand in the USA since 2016. Deliveries in the year to date reached 335,400, a rise of 4.2 percent compared with 2018. This development was buoyed by the sustained SUV trend. In November, the SUV share in VW deliveries was 55 percent – a new record. SUV deliveries reached 16,200 units in November, 30 percent more than the same month last year.

In the South America region, significant growth was also recorded compared with November 2018. In this region, the brand handed 42,600 vehicles over to customers, achieving growth of 6.0 percent in a shrinking overall market, and was therefore able to significantly extend its market share. In Brazil, Volkswagen recorded considerable further growth of 12.3 percent in deliveries, which reached 35,400 vehicles, and further increased its market share.

In the Asia-Pacific region, too, the Volkswagen brand grew deliveries by 3.1 percent in the month under review in contrast to the shrinking overall market. The brand handed over 330,100 vehicles to customers. The same trend was evident in China, the brand’s largest single market. While there was further shrinkage in the overall market, Volkswagen delivered 316,700 vehicles, 4.0 percent more than in November 2018, once again expanding its market share.

Overview of deliveries by the Volkswagen brand in November: