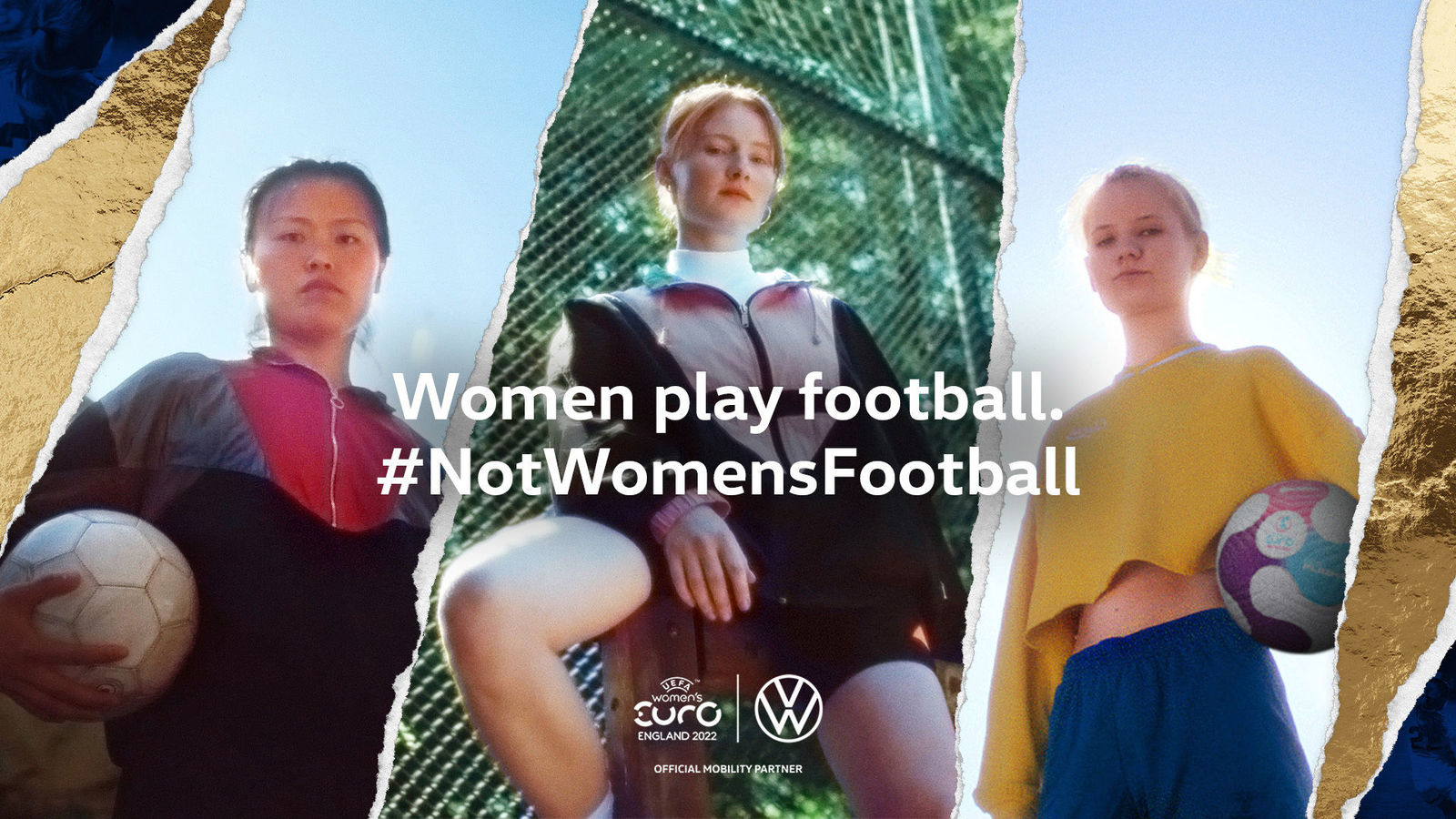 The campaign hashtag is deliberately provocative and is intended to generate attention.
07/05/22
Wolfsburg
Company
Press Release

Volkswagen, official Mobility Partner of the UEFA Women’s EURO 2022 and the German Football Association (DFB), is pointing out the inequalities that exist within football as the tournament kicks off. The focus is on the provocative hashtag #NotWomensFootball, with the aim of triggering a discussion around the topic of equal opportunities. The hashtag will be on display for the first time across the LED displays at the opening match between England and Austria.

The conceptual starting point of the campaign is the common use of the term “women’s football” to describe matches played by female teams. Adding “women’s” gives the impression that this is not “real” football – while men’s teams simply play “football”, without any additional specifications. This represents a linguistic intensification of perceived preconceptions.

Volkswagen is aiming to point out this state of affairs, simultaneously raising awareness of just how much women contribute to football and sport in general all around the world. Supported by Volkswagen, the footballers of VfL Wolfsburg have been a figurehead for German football for many years.

“Our campaign is a wake-up call to raise awareness and encourage people to question how they use language. It is language that shapes the ways in which people think about the world,” says Imelda Labbé, who was appointed to the Board of Management of the Volkswagen Passenger Cars brand in July. “At Volkswagen, we believe in the power of diversity in all areas, in order to achieve major transformations together. These include sustainable electromobility, which we committed to at an early stage as pioneers.”

Internally, Volkswagen is applying a holistic approach to the topic of diversity. “We live diversity” is one of the seven Group principles. The Human Resources area for the Group makes use of a worldwide diversity index to ensure fair and impartial actions. Training sessions are also provided for management and employees to raise awareness of diversity issues and to ensure that diversity is actually practices within the company. This does not just focus on equal opportunities for men and women, but also takes into account characteristics such as cultural background and sexual orientation.

The #NotWomensFootball campaign is taking place in coordination with the German national side, with support from some famous names within the team. “The discussion around equal opportunities for men and women in professional sports is gaining traction around the world. I think it’s good that Volkswagen is also driving the discussion in football. The hashtag #NotWomensFootball will prompt plenty of conversation. It is an important step towards recognition of the great performances produced by all female footballers – whether they are playing at amateur or professional level,” says the captain of the national team, Alexandra Popp.

To reach a wider public, the campaign will kick off on 06 July in the opening match at Old Trafford in Manchester, when the hashtag #NotWomensFootball will be displayed on the digital boards. An emotional video will be published at the same time. All content will be hosted on the wedrivefootball pages in the Volkswagen Hub. More content will be published there as the tournament progresses, including up-to-date football stories related to equal opportunities and stories from the venues to keep the topic at the forefront of media attention.

Support for the UEFA strategy “Time for Action”

The campaign is a clear expression of support from Volkswagen for the current UEFA strategy for women in football. Under the “Time for Action” motto, UEFA has been making substantial investments in European football since 2019 – with the aim of doubling the number of players in Europe by 2024. This is based on a change in public perception and structural support in youth and junior football to provide all women and girls who love the sport with the opportunity to pursue their sporting passion.

Expression of social commitment from Volkswagen

The campaign is to continue beyond the European Championships. It is an integral component of Volkswagen’s activities with which the Group aims to demonstrate support for increased diversity and equal opportunities. The commitment corresponds to the bedrock of values underpinning the Group and its shared corporate culture. 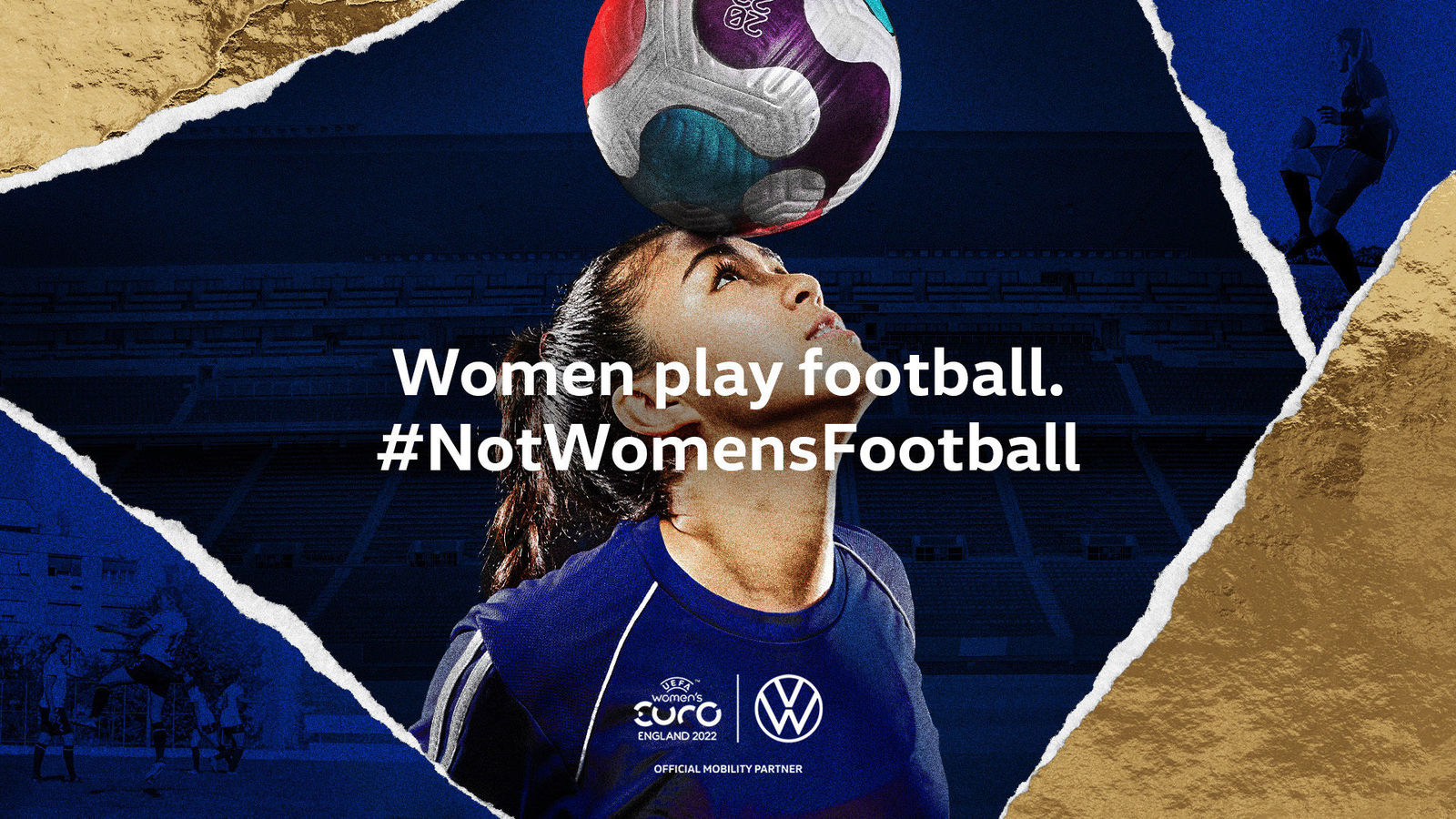