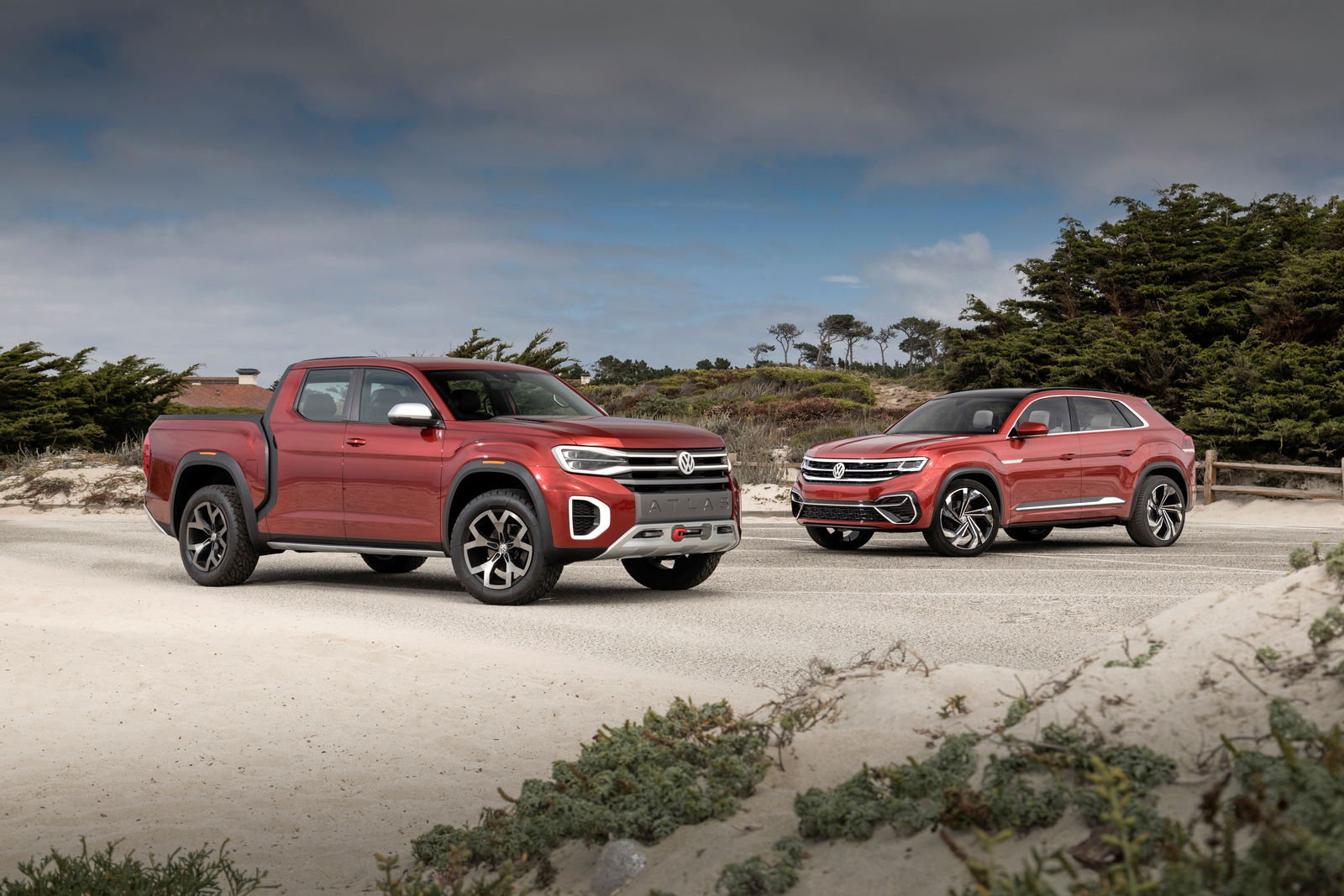 At Monterey Car Week (21 – 26 August) in California Volkswagen will be showcasing two German/US American studies on the basis of the Atlas SUV: the Atlas Tanoak Concept pick-up and the dynamic SUV Atlas Cross Sport. The progressively designed and developed all-wheel drive models illustrate the potential that lies within the Atlas range. Klaus Bischoff, Head Designer at Volkswagen: "Thanks to the Atlas Cross Sport we are introducing a high design standard to the full-size SUV category. The Atlas Tanoak is our version of the American dream – a genuine pick-up with clear-cut Volkswagen elements and a futuristic, digital vehicle interior architecture."

Every year in August the golf course in Pebble Beach (Monterey/ USA) is transformed into the automotive world's hall of fame. Fascinating classics compete with each other as part of the Concours d’Elegance; the most beautiful vehicles of their era are honoured as design and engineering milestones. However, Pebble Beach has long since also become an automotive looking glass into the future. Manufacturers showcase what will and may become a reality – cars like the Atlas Cross Sport and the Atlas Tanoak Concept with drive systems specifically adapted to the corresponding deployment areas.

The Atlas Cross Sport will become a reality. The series production version is scheduled to launch as early as 2019. The new Volkswagen is the five-seater version of the Atlas, a seven-seater, mid-sized SUV that has already been launched in the US. The concept vehicle close to series production scores high marks with a sporty, compact, coupé-style rear section and plug-in hybrid drive (PHEV) with 265 kW/360 PS system output and a purely electrical range of up to 26 miles (EPA). The second version of the concept vehicle featuring a hybrid drive without an external battery charging function (HEV) generates a system output of 231 kW/314 PS. Both Atlas Cross Sport models include temporarily available, zero emission drives and have been perfectly geared towards metropolitan areas, such as San Francisco or Los Angeles. We can confirm that the series version of the Atlas Cross Sport will be produced at the US plant in Chattanooga (Tennessee) in parallel to the seven-seater Atlas.

The Atlas Tanoak Concept may be on the cards. Driven by a 206 kW/280 PS V6 petrol engine, this concept vehicle represents Volkswagen's first pick-up on the basis of the variable modular transverse matrix (MQB). Up to the B-pillar, pick-up and SUV are very similar in terms of their outline. Both versions differ towards the rear of the body: the pick-up's rear doors are not as obvious at first glance as the door handles are almost invisible and have been integrated into the C-pillars; the double cab consequently seems particularly long and therefore elegant. A striking design is also a dominant element of the Atlas Tanoak Concept's large and durable loading area (cargo box). Named after a type of tree native to the US Pacific coast that grows up to 45 metres tall, Northern America's vast landscapes are the pick-up's terrain. The Atlas Tanoak would be launched in Northern America's vehicle class with the highest volumes.

Both studies celebrated their world première in March 2018 in New York, on the East coast of the US. The all-wheel drive vehicles with their striking LED signature lights are now on show in Pebble Beach on the US West coast for the very first time – with the legendary 17-Mile Drive as a backdrop. 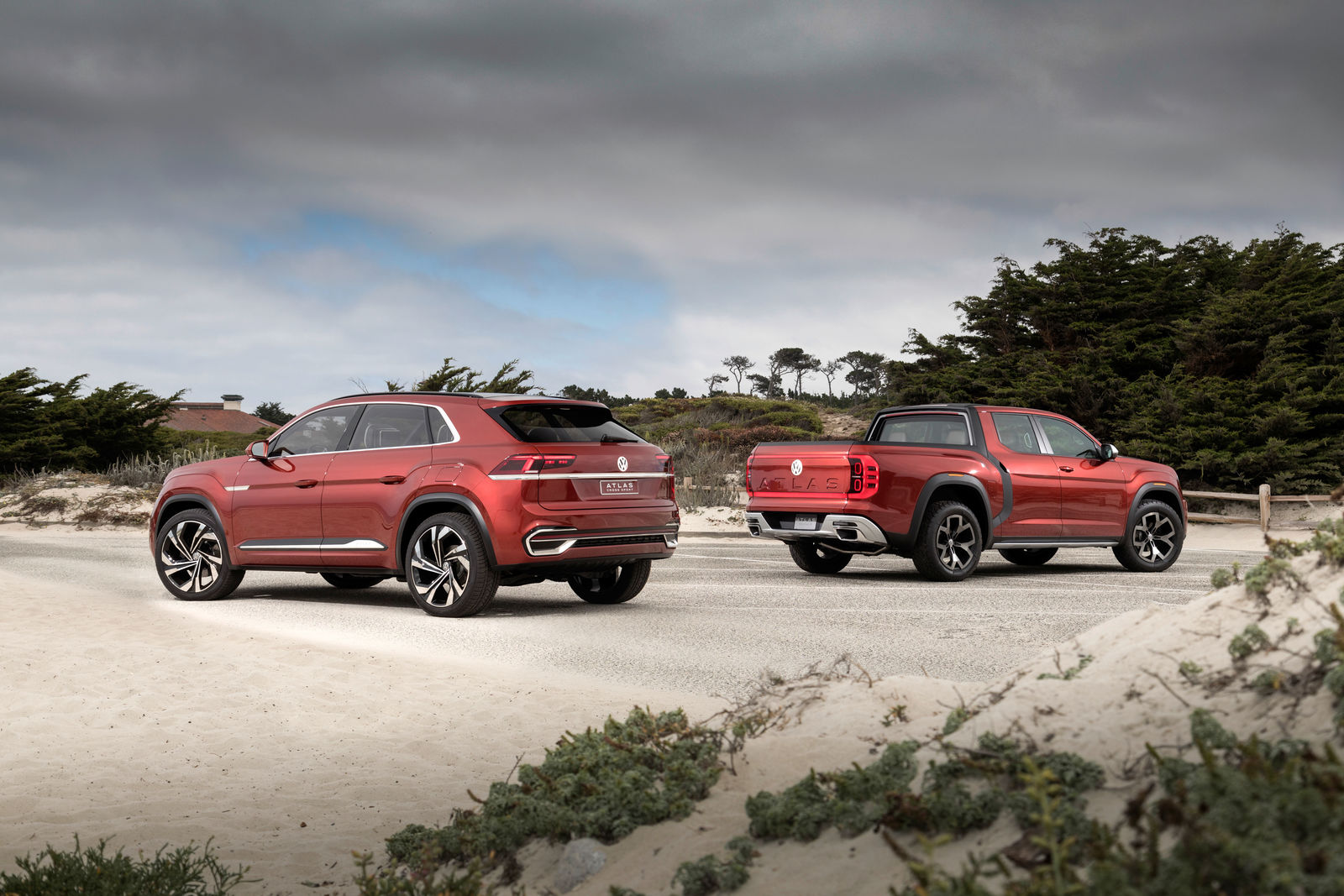