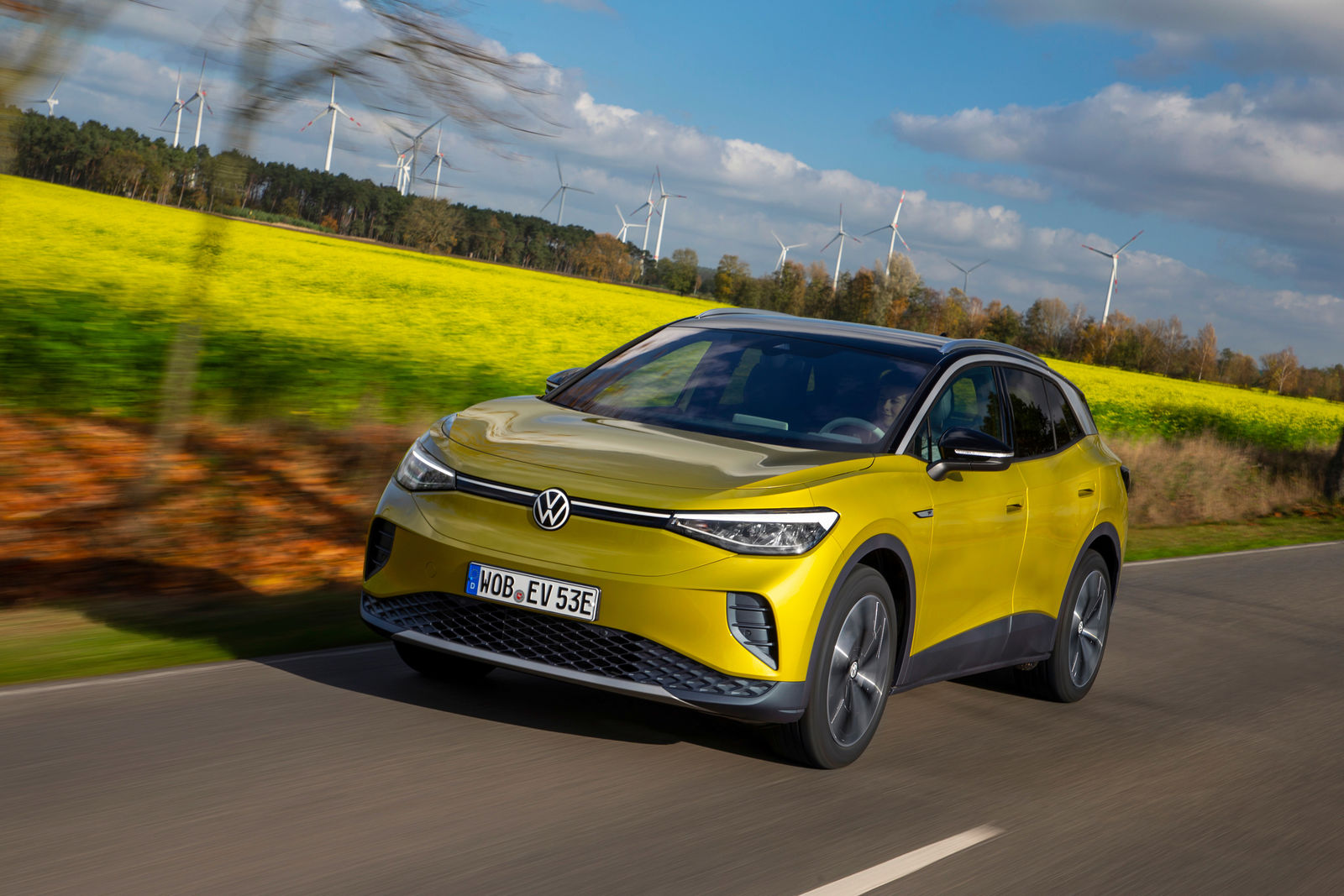 Brake energy recuperation, in other words energy recovery when decelerating, greatly boosts the range of any electric vehicle. In the new Volkswagen ID.4, this follows a concept aimed at maximum efficiency.

It’s a difficult question: what should happen when drivers of electric vehicles take their foot off the right-hand pedal to initiate a thrust phase? Should the electric drive motor act as an generator, converting kinetic energy into electrical energy or should it run without generating electrical energy, so that the vehicle’s momentum is used for coasting?

The answers to these questions vary greatly depending on manufacturer and model. Some electric vehicles always recover energy during any thrust phase. In the case of the new E-SUV ID.4 – as well as the compact ID.3 – Volkswagen opted for a different, more efficient strategy: coasting has priority because any conversion of energy inevitable leads to loss. This applies to position D (Drive), the main mode, which is automatically activated upon each start.

Coasting and energy recovery. The coasting function, whereby drivers take their foot off the accelerator pedal early on, makes for relaxed and predictive driving. Should drivers want to decelerate more, they step on the brake pedal and thus activate brake energy recuperation. Up to around 0.25 g, in other words during the majority of everyday braking manoeuvres, the electric drive motor performs the braking alone, while the electric brake servo only activates the wheel brakes in situations demanding more deceleration. The transition from generator-based to hydraulic braking goes almost unnoticed – thanks to highly accurate and swift brake and drive system control. These systems also make sure that the rear wheels, where brake energy recuperation takes place, always have a sufficient amount of grip.

Efficiency as standard. Each ID.4 features predictive Eco Assistance as standard. It analyses data from the navigation system and vehicle sensors to provide drivers with effective support in driving efficiently and in a relaxed way. Once the ID.4 approaches a zone requiring slow speeds – such as built-up areas, junctions or bends – Eco Assistance notifies drivers to take their foot off the accelerator pedal. From this moment on, the system manages optimum coasting and energy recovery without drivers having to intervene. The car responds similarly when it approaches a vehicle ahead that is travelling at a lower speed.

D or B. Drivers can use the driving mode selector rocker switch on the display to change from position D to position B (Brake) at any time. In this mode, the ID.4’s drive almost always recovers energy during thrust operation, but not up until the vehicle has come to a standstill. The limit has been set at 0.13 g – enough for clearly noticeable deceleration, yet insufficient to give the distinctive feeling of using merely the accelerator pedal to accelerate and brake the vehicle. This is intentional as Volkswagen does not want to irritate customers – effortless, intuitive operation is one of the vehicles’ greatest strengths.

In some ID.4 models, drivers can rely on a second tool in addition to the driving mode selector to influence the decision between coasting and energy recuperation, namely driving profile selection (part of the Plus sports package). The Sport profile supports brake energy recuperation – also in position D, but not to the same extent as in B. In some situations the battery charge level also plays a part: after all, if it’s fully charged, it can’t store any more recovered energy. 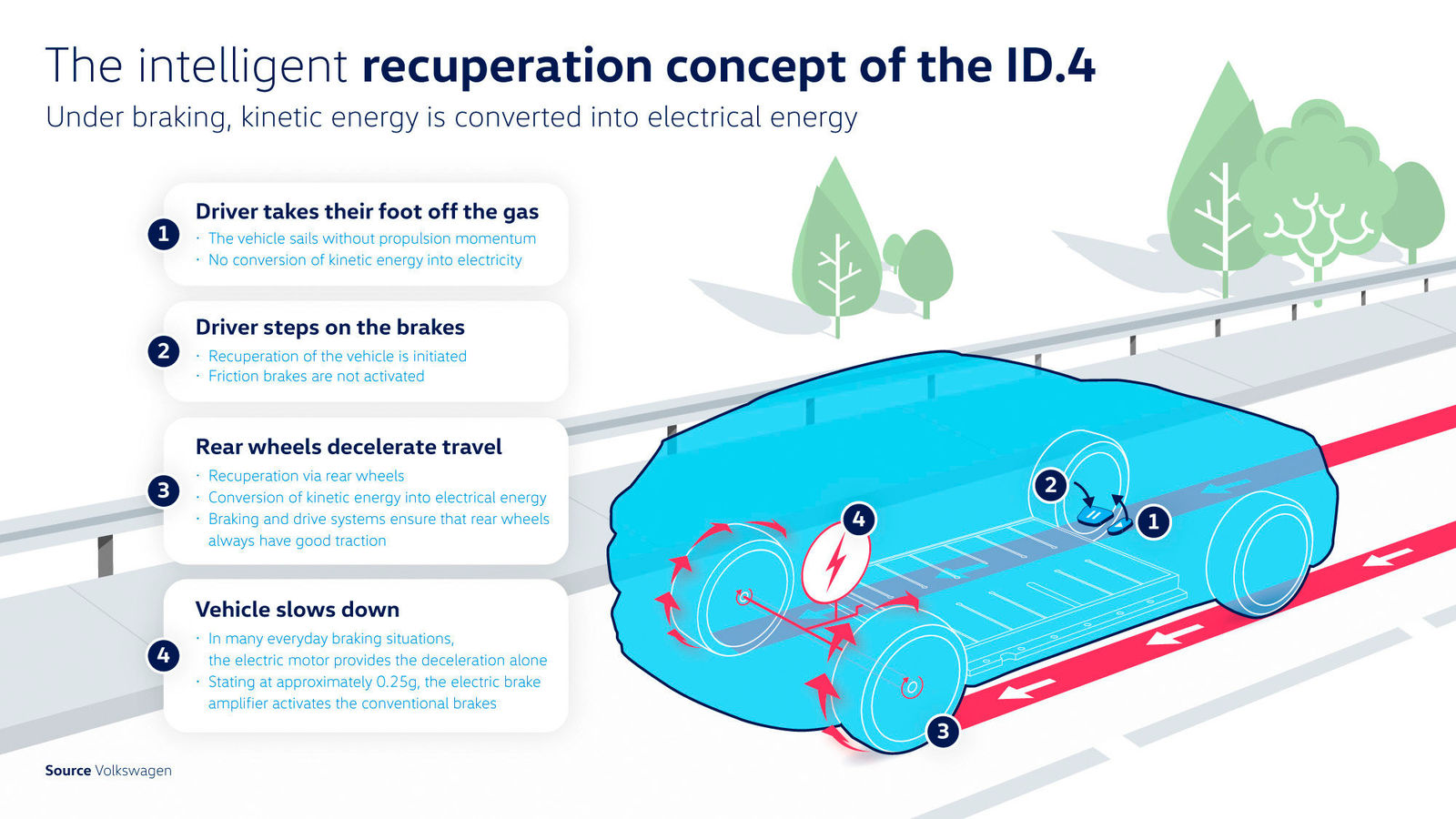 SUV of a new kind. Sporty, yet comfortable driving in the ID.4: with its striking body design, it offers a large vehicle interior and cutting-edge solutions for controls, displays, infotainment and assist systems. The ID.4 is Volkswagen’s first all-electric SUV and the brand’s first electric world car. In December 2020, six models are being launched onto the world’s largest market segment, the compact SUV class. Depending on customer wishes, the battery has an energy capacity of 52 or 77 kWh (net) with ranges up to 520 kilometres (WLTP)2. At the market launch, the electric drive motor generates either 125 kW (170 PS) or 150 kW (204 PS). Further motors will follow in 2021.

The future of mobility is electric. Following on from the ID.3, the ID.4 is the second model within the ID. family. This new, unique product range enriches the brand’s traditional product portfolio. The designation ID. is associated with intelligent design, identity and visionary technologies. The Volkswagen brand will invest eleven billion euros in electric mobility by 2024 as part of the Transform 2025+ strategy.