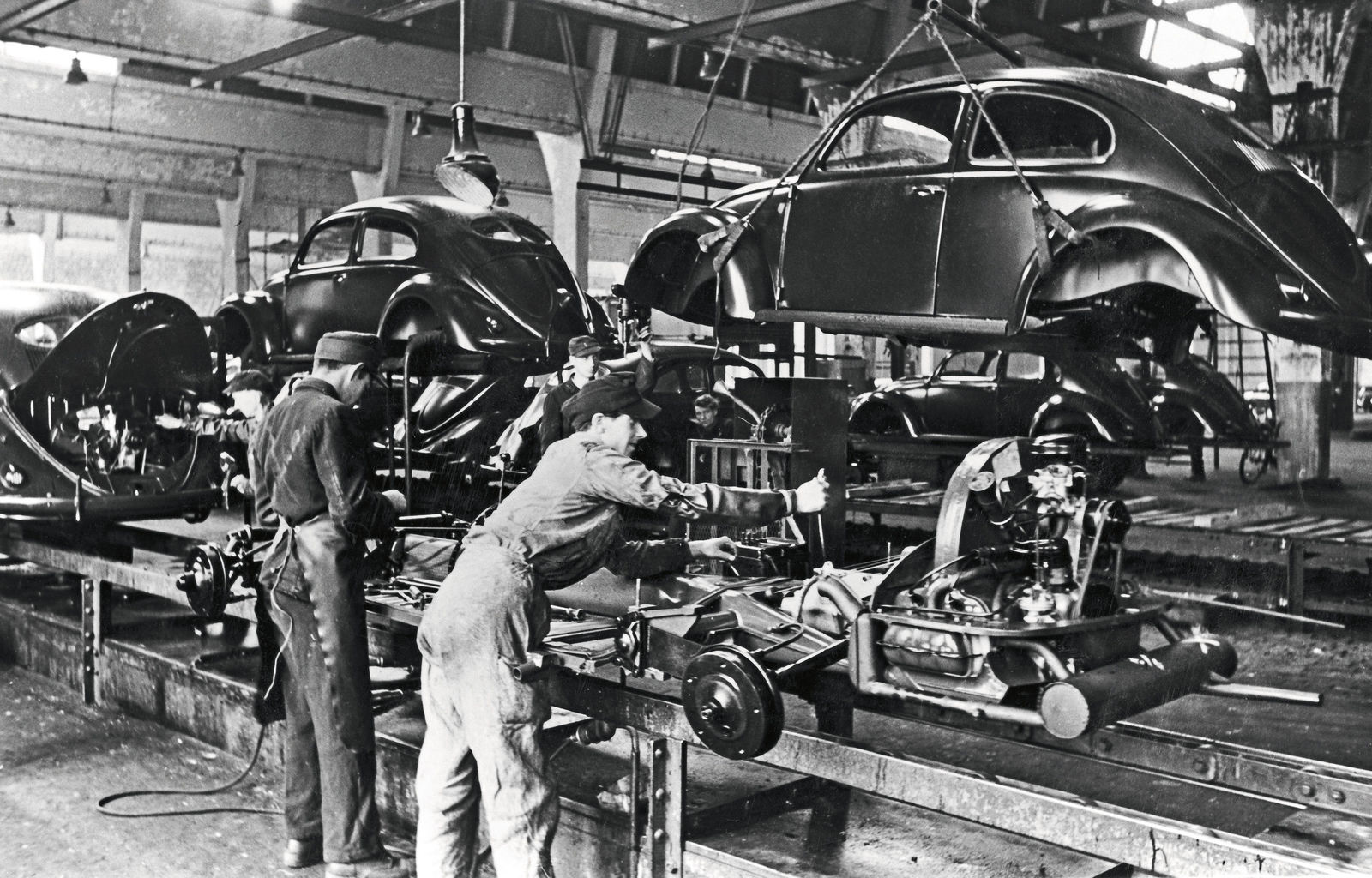 The “marriage” at Volkswagen’s Wolfsburg plant. You can request this photo with the indication of the intended use and the image signature at history@volkswagen.de.
12/22/20
Wolfsburg
Company
Press Release

75 years ago in Wolfsburg:
Start of series production of the Volkswagen Beetle

On December 27, 1945 the serial production of the Volkswagen Limousine (Type 1) got started. This was the real beginning of the success story of the Volkswagen. The model had originally been planned as a prestige project of the National Socialists. But from 1939 onwards the Wolfsburg plant had produced armaments instead of vehicles. Up to the end of World War II, only 630 units of the model, which had been renamed “KdF-Wagen” in 1938, left the Volkswagen plant. It was only under British trusteeship that the unique success story of the VW Beetle began at Wolfsburg thanks to the strategic vision of Major Ivan Hirst.

Series production of the civilian Volkswagen, referred to internally as “Type 1”, which later became world-famous as the “Beetle”, only started following the end of World War II on December 27, 1945 under the trusteeship over Volkswagenwerk GmbH which had been assumed by the British Military Government in June 1945. The British intended to use the Volkswagen Type 1 to perform urgently needed transport tasks within their occupation zone. It was this British pragmatism that finally protected the plant against impending demolition. Senior Resident Officer Major Ivan Hirst played a key role in this development. It was his farsightedness and talent for improvisation that made it possible to start automobile production in the years of rationing under conditions dominated by shortages. With his enthusiasm for technology and cars, his purposefulness and distinct attitude, he succeeded in transforming a former armaments plant into a civilian industrial company in an impressively short space of time.

The British Military Government had already issued an order for 20,000 vehicles in August 1945. The start of production was a visible sign of a new beginning and hope at the factory which had been largely destroyed by the end of World War II. This solution was in line with later British policy for Germany, which saw financial security and future prospects for the population as key elements in the development of democratic structures. Finally, democracy finds its way into the Volkswagenwerk: on November 27, 1945 the the Works Council elected in a democratic ballot held its constituent meeting.

Nevertheless, there were considerable problems in supplying the workforce with food and living space and production was hampered by raw material and energy supply bottlenecks. Despite these difficult conditions, the first Volkswagen sedan left the production line shortly after Christmas. Wolfsburg and Volkswagenwerk GmbH received a belated Christmas present only eight months after the end of the war. By the end of 1945, 55 vehicles had been produced.

From 1946 up to the currency reform, about 1,000 vehicles were produced per month. It was not possible to produce more vehicles in view of material shortages and rationing as well as a lack of personnel. The trustees responsible laid the foundations for further growth of the company by the fall of 1949. They established a sales and after-sales service system and began to export the Volkswagen sedan in 1947. 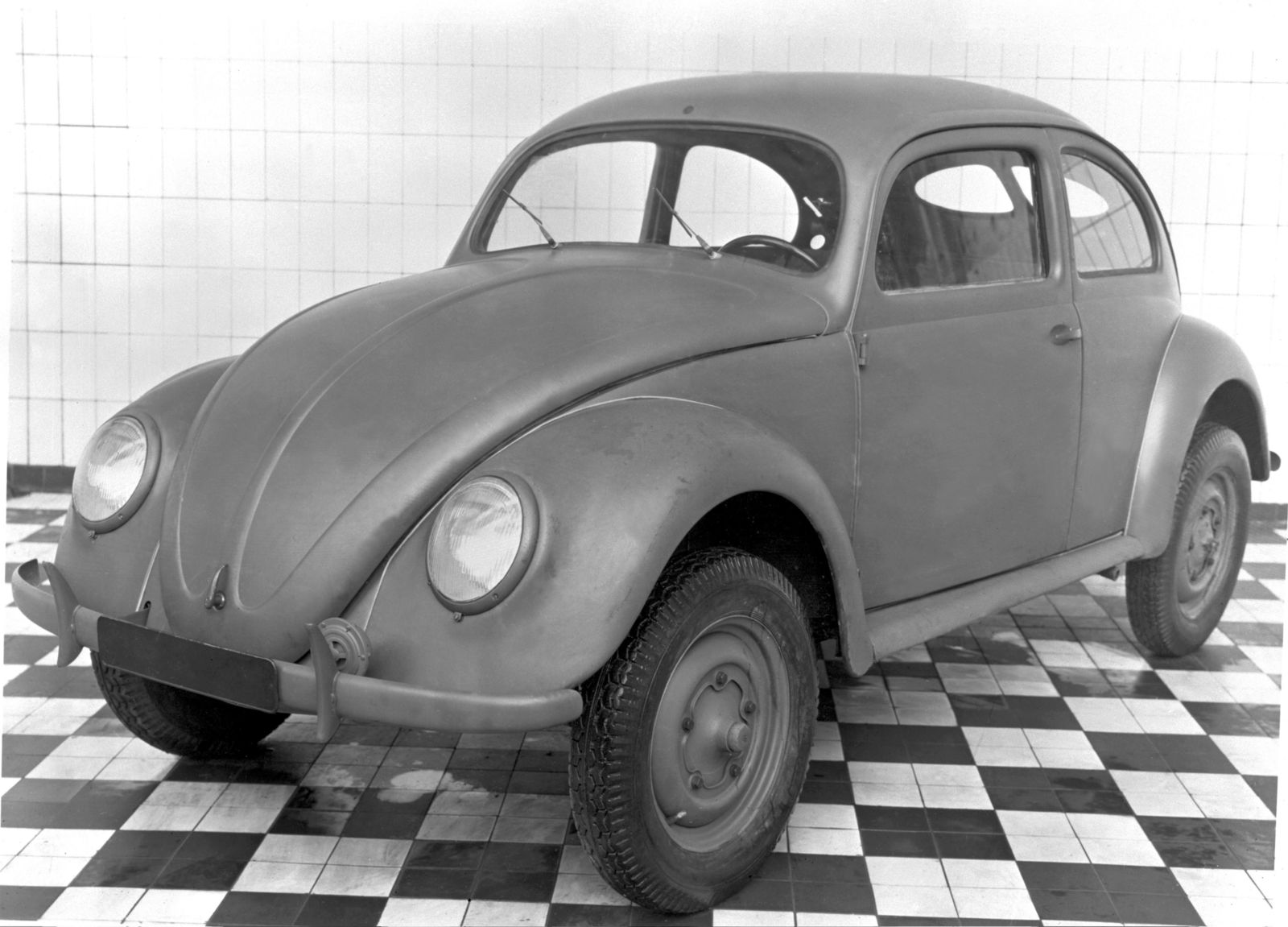 Volkswagen Type 1, the “Beetle”. You can request this photo with the indication of the intended use and the image signature at history@volkswagen.de.

The decision to develop a civilian factory and to start series production of the Volkswagen Type 1 was the starting point of a unique success story. Thanks to the early restart, the Volkswagenwerk GmbH got an excellent initial position for the economic upswing after the introduction of the D-Mark. Under the unofficial designation of “VW Beetle”, the car became more popular than almost any other automobile model throughout the world. It was also a record breaker in terms of production duration and volume. Volkswagen only discontinued production of the VW Beetle in Mexico in 2003, after 21,529,464 vehicles had been manufactured, including about 15.8 million in Germany.