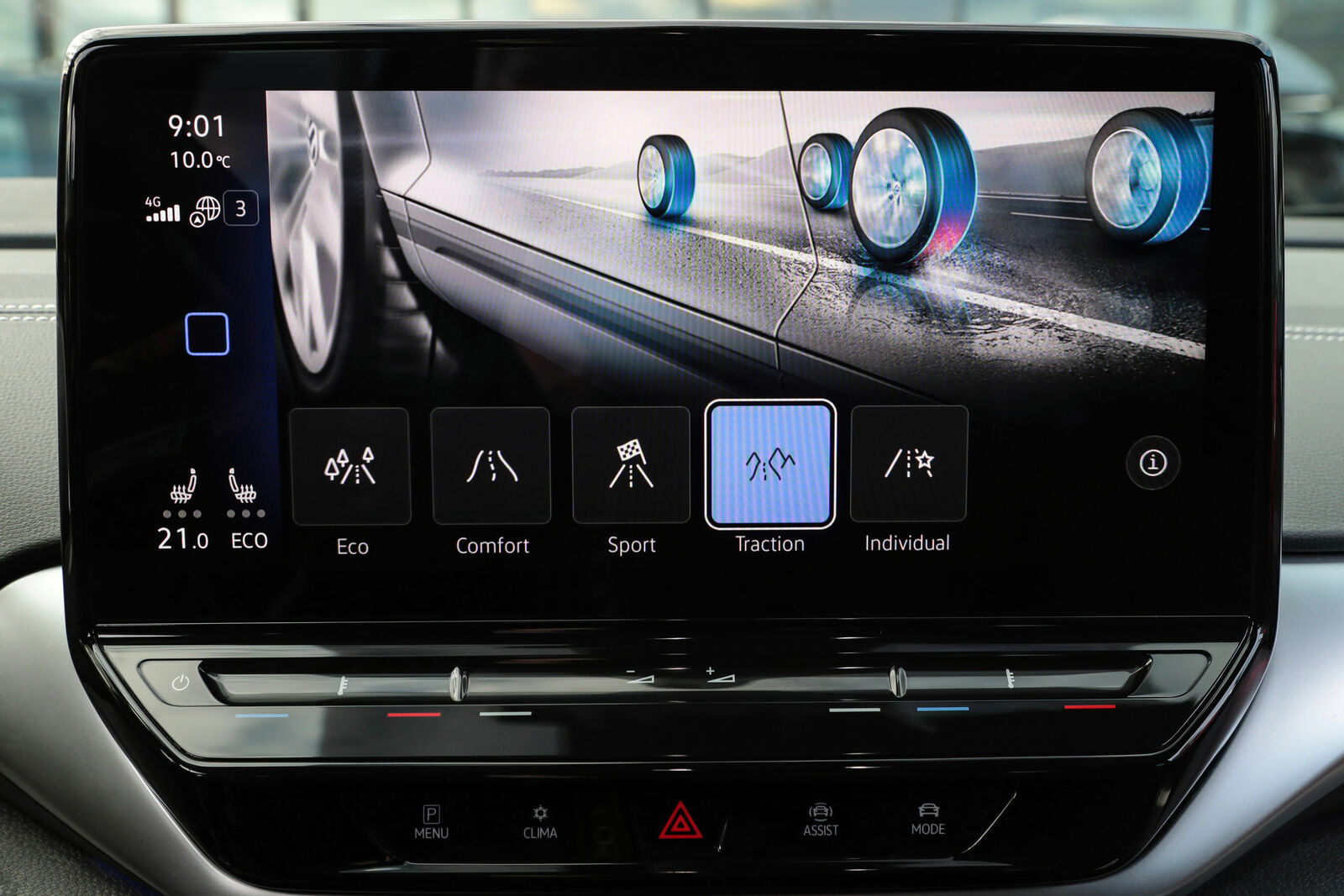 PSM at the rear axle. Conceptionally, the dual engine four-wheel drive on the ID.4 Pro 4MOTION is constructed in the same way as on the top-of-the-range ID.4 GTX 4MOTION model: each axle has an electric motor; the rear motor provides the drive in all situations, the front assists the rear when necessary. The permanently excited synchronous motor (PSM) on the rear axle weighs just 90 kilograms, including its power electronics, single-speed transmission and differential. The great strength of the PSM motor with its axially parallel layout, is its efficiency, which is well above 90 percent in the vast majority of driving situations.

Faster without surges. The front wheels are driven by a particularly compact asynchronous motor (ASM). Its benefits are the short-time overload capability and minimal drag losses when inactive. The coaxially mounted front drive unit weighs roughly 60 kilograms. With the dual engine four-wheel drive, there is no mechanical connection between the two axles via drive shaft, clutch or differential. This makes the system extremely quick and very efficient – and means there is no centre tunnel in the interior of the ID.4 Pro 4MOTION.

Efficient and dynamic four-wheel drive strategy. The fully variable four-wheel drive strategy of the ID.4 Pro 4MOTION constantly calculates how much drive torque the two e-motors need to generate, in order to achieve the optimium efficiency, dynamics and driving stability. At moderate speed, the PSM on the rear axle works alone, due to its advantages when it comes to traction and efficiency. If the driver demands more power than the PSM can provide, the ASM is activated within a few hundredths of a second, and imperceptibly smoothly. Driving dynamics also play an important role: the additional front-wheel drive always comes into play when the situation demands it, such as when cornering quickly or on slippery surfaces.

Central driving dynamics manager. The electronic Vehicle Dynamics Manager (standard), a ground-breaking development from Volkswagen, monitors all the movements of the ID.4 Pro 4MOTION, whether it be accelerating, braking or cornering. As in the Golf GTI and Golf R, where it is used in a similar form, it significantly improves overall performance. The Vehicle Dynamics Manager links the all-wheel drive control with the ESC stability control and the DCC dynamic drive control (optional), achieving a top level of driving dynamics, traction and stability. The electronic differential lock XDS+, which is also connected to the Vehicle Dynamics Manager, rounds off the handling during fast cornering: it gently decelerates the unburdened inside wheels, making the E-SUV easy to turn.

RPM-based control. Compared to a combustion engine, the degree of precision demonstrated by the drive control in the ID.4 Pro 4MOTION is in a totally different dimension. One reason for this is that the two e-motors implement the requirements much more spontaneously than any diesel or petrol engine. They are given new commands every millisecond via their respective power electronics – so quickly and smoothly that the driver never notices the adjustments. Another reason is that the control of the dual engine four-wheel drive is no longer based on torque, but on the more exact basis of engine speed.

Coast or recuperate? Recuperation is an important factor in driving efficiently with the ID.4 Pro 4MOTION. The gear selector is used to decide what happens when the driver takes their foot off the drive pedal and initiates a thrust phase. When level D (Drive) is selected, the car rolls in most situations, with both e-motors running almost entirely freely. This “coasting” is given priority, as it is most efficient.

Recuperation in level B. If the driver prefers to recover energy, the E-SUV has various options. In level B (Brake), the drive system almost always recuperates energy during thrust. The limit has been set at 0.15 g of deceleration. If desired, the Eco Assistance system manages the coasting and recuperation, as soon as the car approaches a zone requiring slow speeds. To do so, it analyses navigation data and traffic signs, among other things.

Electric braking up to 0.3 g. The degree of energy recovery is particularly high when braking electrically, which primarily takes place via the PSM at the rear axle. This covers more than 90 percent of all decelerations in everyday use. Its limit is set at around 0.3 g, which equates to more than 100 kW of recuperation. Only when this limit is surpassed does the electric brake servo on the ID.4 Pro 4MOTION also activate the hydraulic wheel brakes. The transition is virtually imperceptible, while the recuperation remains active until the vehicle has almost reached a standstill.