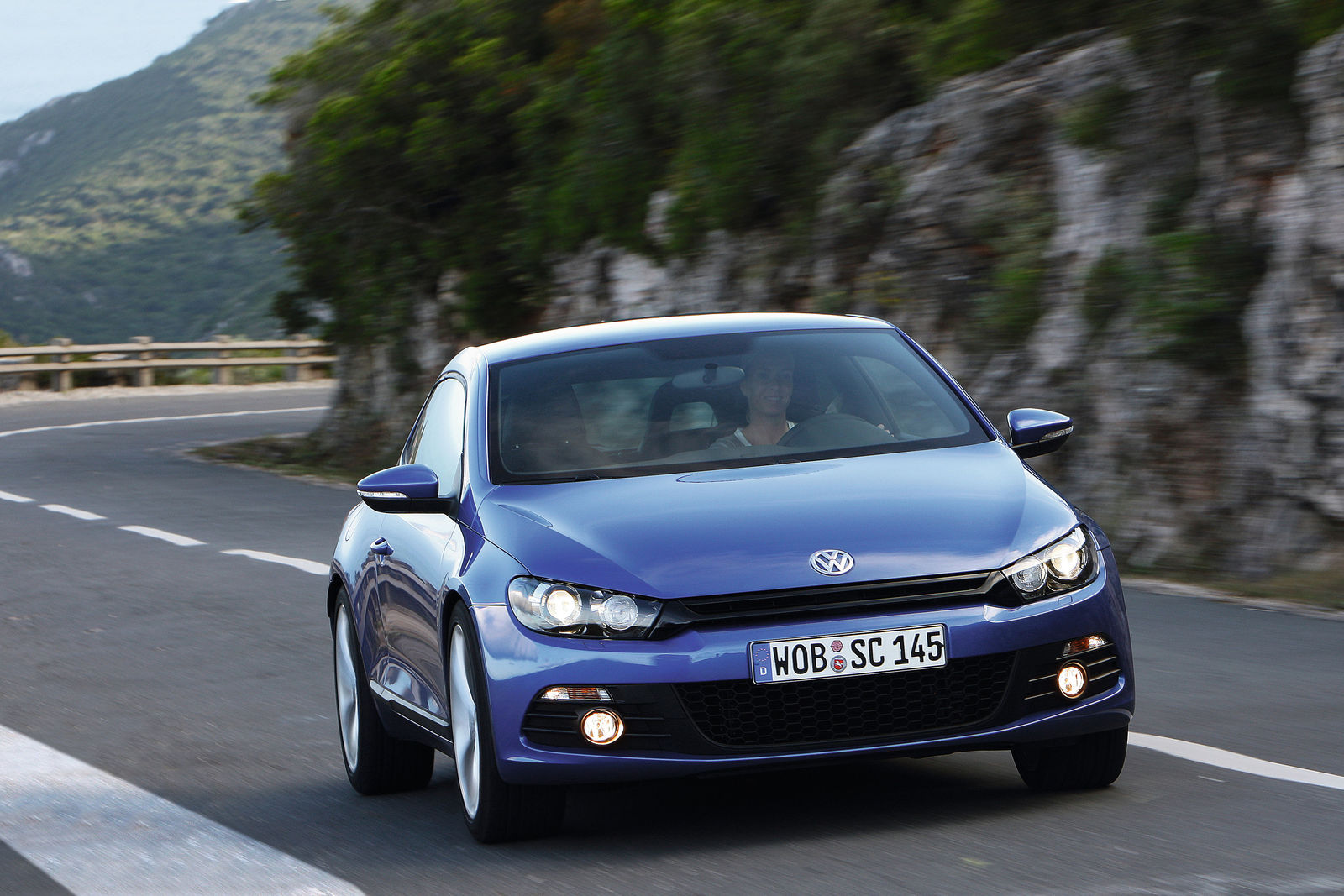 Beginning of a new era:
Scirocco is frontrunner an with extremely clear design philosophy

The events are remarkably similar, although they are separated by a span of more than three decades: in 1974 Volks­wagen introduced the new Scirocco to the market just a few months before the debut of the first generation Golf. The sports car was a sensation, since it not only replaced the rear engine Karmann Ghia, but also initiated – after the Passat presented before it – a whole new era of design. The fact is that the original Scirocco designed by Italian Giorgetto Giugiaro (Italdesign) offered an initial glimpse of the future Golf that was also drawn up at Italdesign. 34 years later, this history is now repeating itself in some aspects. The reason: this third generation Scirocco is the first Volkswagen to exhibit the new front end design for a new era.


THE DESIGN OF THE SCIROCCO IN DETAIL

Designers configured the third generation Scirocco unmistakably as a pure sports car. Even more powerful than the original Scirocco of the 1970s and the second generation in the 1980s, the new Scirocco still offers significantly more interior space. That is because – in contrast to its two predecessors – the Scirocco of the year 2008 does not have a sloped hatch, rather a steep hatch with a long roof and vertical tailgate. That offers two crucial advantages. First: the Scirocco exhibits very crisp proportions. Especially when viewed from the rear, it immediately becomes clear that the 1.80 meter long roof together with the lateral lines of the windows stand on very broad and powerful shoulder sections. So the Scirocco's design is based on flawless sports car fundamentals. Second: the new model also has space in back for two adults and their luggage. Altogether, the progressively styled Scirocco combines a high level of everyday utility with high-end design.

With its short overhangs, the Scirocco efficiently utilizes its 2,578 millimeter wheelbase for interior space. The Volkswagen is 1,404 millimeters tall, exactly 4,256 millimeters long and 1,810 millimeters wide.

The Scirocco's front end exhibits, as already described, a completely new Volkswagen design language. On the one hand, it preserves historical elements, yet at the same time it takes a great leap forward. The radiator grille and bumpers are characterized by a timelessly impressive dynamism. Technically, the front car concept satisfies Volkswagen's stringent requirements for pedestrian safety.

Stylistically, horizontal lines dominate in the upper area of the Scirocco's front end. Spanning the distinctive, high-sheen black background of the dual headlamps, is a very narrow cross bar, also glistening in luxurious black. Beneath it is a similarly shaped, very clearly defined area in car color. This double band of the high-sheen radiator grille and the bumper painted in car color – both defined by crisp lines – will become a new character trait. In the lower section of the front end, the image is defined by the central air inlet with its diamond pattern in black, and the turn signal and fog lamps integrated to its left and right.

When one runs their hand over one of the headlamps, then over the fender and a door, one notices that the surfaces of the side profile alternate in curvature. This the side image changes like a moving muscle in response to the viewer's perspective and incident lighting. This powerful appearance is reinforced by the standard 17-inch wheels, which due to the car's large tread width (1,569 in front, 1,575 millimeters in the rear) are practically flush with the body.

Furthermore, the hidden B pillar, the line of windows that ascends steeply toward the rear, and the very distinctive C pillar are features that convey a very independent presence and dynamic together with the seemingly endless roof line. In the rear area, an integrated roof spoiler adds to the dynamics and applies additional downforce at the rear axle. The sculpted taillights, also very distinctive when the car is viewed from the side, offers a very special counterpoint.

The sculptural form of the wide taillights – with their unmistakable night design – is most impressive from the rear perspective. Here the vehicle's character is defined by the ratio of proportions between roof and shoulder section, i.e. the belt line. It is sharply contoured, since the roof runs substantially narrower than the car body. These stylistic properties produce a design typical of a very powerful, high-performance sports car. The already quite wide tread width looks even wider. From the rear, the posts of the C pillars cannot be made out visually, since the window of the tailgate spans the entire width of the vehicle. The overall design of the rear end – with a wider, heftier bumper plus large tread width plus roof line plus roof spoiler plus wrap-around rear window – all convey an exceptionally powerful image.

The panorama vent sunroof, with its black exterior, is made of safety glass. Its visual appearance was made to extend toward the windshield frame by a high-sheen black surface (polycarbonate) that is part of the glass-fiber reinforced polyurethane roof frame. The low-profile design of the panorama vent sunroof does not reduce headroom in the sports car in any way. On the contrary: the lack of a roof liner in the area of the glass section frees up more space than would be available without the transparent roof.


SAFETY ON THE SCIROCCO

The new Scirocco is characterized by passive safety that is on the same recognized excellent level as the Golf and Passat. It is based on an extremely rigid body structure, energy absorbing deformation zones all around, and restraint systems specifically tuned to the sports car.

The combination of a highly rigid occupant cell and deformation zones laid out according to computations is a prerequisite for good crash performance. The concept applied to the Scirocco is profile-intensive lightweight construction with cold-worked, high-strength sheet metal. All real tests and computer simu­lations confirm that the steel body designed in shell construction offers optimal protection even under the most difficult crash conditions.

A key aspect of the development of the Scirocco was pedestrian safety. All relevant components at the front of the vehicle were adapted to this objective. Engineers paid special attention to the engine hood, e.g. to optimize the hinge area for pedestrian protection. Also contributing here is a newly designed foam piece mounted behind the bumper fascia, whose soft consistency reduces the severity of leg injuries.

Besides its highly safe body structure, the car's standard front, side and window airbags also make the new Scirocco one of the safest cars in its class. As is usual at Volks­wagen, the front passenger airbag can be deactivated by a "key switch" in the glove box, and if a small child is traveling in a rear-facing seat. Moreover, child safety is further supplemented by standard Isofix mounting fixtures at the rear seat positions.

An important aspect aside: not only are the airbags and belt tensioners triggered at a specific load via a central ECU, but in parallel the hazard flashers are activated, the doors unlocked, the interior lights are turned on and the fuel pump is shut off.

The Scirocco – like all Golf, Jetta, Eos, Tiguan, Touran and Passat Volkswagen models – is delivered with electro­mechanical power steering as standard equipment. Its characteristic can be tuned to the specific car model. In this case, a newly programmed Scirocco characteristic map is used; among other things it offers stronger self-aligning torques and somewhat higher steering forces. And precisely these aspects give the driver more direct steering contact to the road.

Also new is the electro-mechanical steering gear: the steering angle sensor, utilized by both the electro-mechanical steering system and ESP, has now been integrated in the pinion gear housing for the first time. That means that it no longer needs to be housed in the steering column switch module. Sensor quality is improved substantially. Another new development is the Scirocco's steering column. Volkswagen engineers improved both its crash behavior and stiffness. Furthermore, the Scirocco's electro-mechanical power steering saves on fuel: compared to a conventional power steering system it offers a savings advantage of 0.2 liters per 100 kilometers.

The new Scirocco is equipped with high-performance sliding caliper disk brakes, large brake disks (internally air-cooled in front) and a master brake cylinder specially designed for the sports car. The new brake cy­linder enables very quick braking response as well as short pedal travel. The disks for engine versions up to 160 PS have a diameter of 288 millimeters in front, and 255 millimeters in the rear. The powerful 200 PS Scirocco TSI is braked by 312 millimeter disks in front; at the rear axle the brake calipers grip 286 millimeter disks.

An advanced generation of ESP is also included as a standard feature. New here: the sensors for acquiring yaw rate and transverse acceleration are integrated in the ESP control module; this made it possible to omit the typical sensor cluster in the car's interior that was previously used.

Note:
All data and equipment contained in this press release apply to models offered in Germany. They may differ in other countries. All information is subject to change or correction.
TDI, TSI, DSG and Twincharger are registered trademarks of Volkswagen AG or other companies of the Volkswagen Group in Germany and other countries.