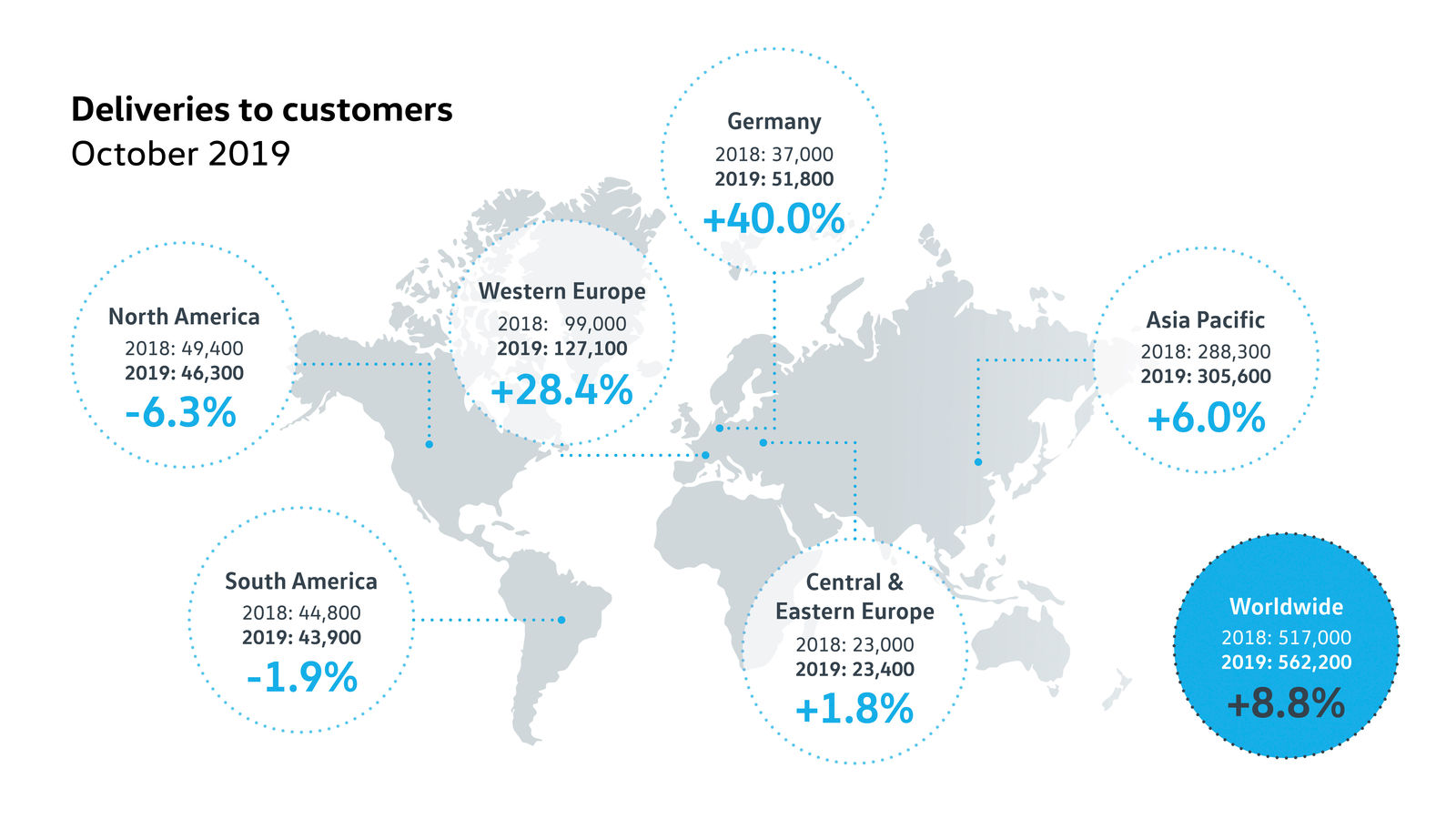 The Volkswagen brand delivered 562,200 vehicles worldwide in October, 8.8 percent more than in October 2018. Volkswagen made further significant gains in market shares in a shrinking overall global market. There was also growth in China (+7.5 percent), the brand’s largest single market, and Brazil (+1.6 percent), with deliveries rising despite shrinking overall markets. Following the weaker figures in October 2018 as a result of the changeover to WLTP, there were further sharp increases in deliveries in the European market (+23.4 percent) and the home market of Germany (+40 percent).

Volkswagen Sales Board Member Jürgen Stackmann: “Overall, deliveries by the Volkswagen brand in October were very strong. This was in part due to a basic effect from the weaker performance in Europe in October 2018 as a result of WLTP, but was also attributable to the very positive sales strength of our important business with China. That is a great success, particularly given the current challenging macroeconomic environment. Especially in uncertain times like the present, customers rely on our strong brand with its modern and attractive model portfolio from small electric car to premium SUV.”

Deliveries in the regions and markets in October developed as follows:

In the month under review, Volkswagen delivered 150,500 vehicles to customers in Europe, corresponding to a further strong rise of 23.4 percent. October 2018 was a weaker month because vehicle availability was restricted as a result of the changeover to WLTP. Volkswagen was significantly better prepared for the second stage of WLTP this year, and there were therefore no negative impacts, with a corresponding marked rise in deliveries compared with the same month last year. Volkswagen again grew more strongly than the overall European market, and was therefore able to increase its market shares.

The increases in Western Europe (+28.4 percent) and the home market of Germany (+40 percent) were especially striking. 127,100, respectively 51,800 vehicles were handed over to customers in these markets. In Central and Eastern Europe, the Volkswagen brand delivered 23,400 vehicles, 1.8 percent more than in October 2018.

Deliveries in the North America region declined in October. Volkswagen handed over 46,300 vehicles to customers there, 6.3 percent fewer than in October 2018. The situation in the USA was similar, with deliveries down 3.2 percent to 28,100 vehicles. As a result, Volkswagen maintained its market share there at the prior-year level. The upcoming model replacement for the Passat again had an impact. The SUV segment, however, recorded further sharp growth (+21 percent), with SUVs again accounting for over half of all vehicle deliveries in October.

Deliveries in the South America region were slightly down on the level of the same month last year. The brand handed over 43,900 vehicles in the region, a drop of 1.9 percent, in an overall market that declined more sharply, and was therefore able to extend its market share. Volkswagen grew deliveries further in Brazil despite the shrinking overall market. 36,200 customers took delivery of their new vehicle, 1.6 percent more than in October 2018. In Argentina, Volkswagen succeeded in boosting its market shares despite a 30.7 percent fall in deliveries to 4,000 vehicles.

In the Asia-Pacific region, too, the Volkswagen brand grew deliveries in the month under review in contrast to the shrinking overall market. The brand handed over 305,600 vehicles to customers in the region, 6 percent more than in the same month last year. The same trend was evident in China, the brand’s largest single market. While the overall market shrank further, Volkswagen delivered 294,700 units, 7.5 percent more than in October 2018, therefore once again significantly expanding its market share. SUVs were particularly popular with customers, and their share exceeded 30 percent for the first time. Volkswagen therefore reinforced its position as the most successful SUV brand in China.