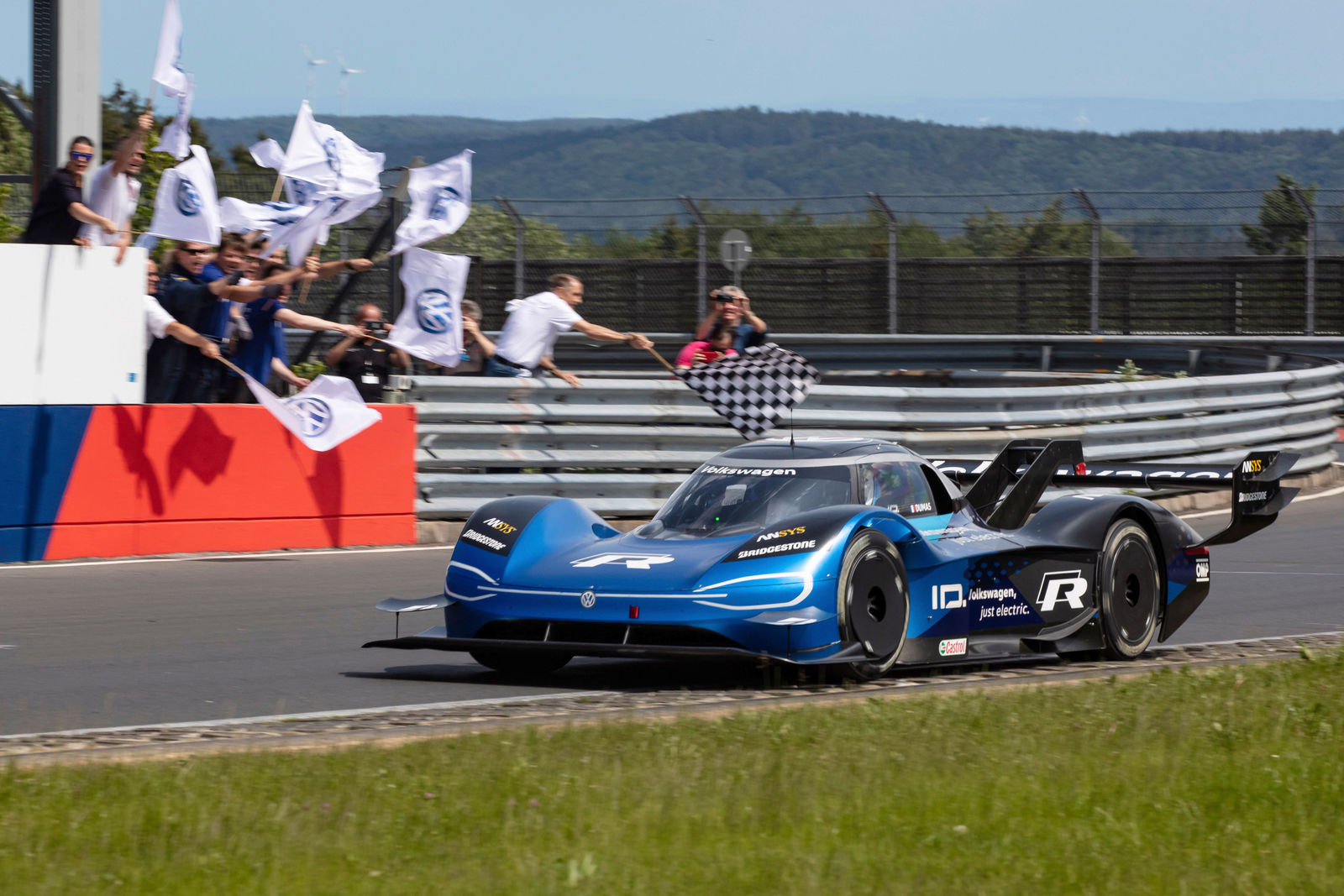 Their names alone are enough to send shivers down the spine of any automobile fan: The legendary hill climb on Pikes Peak, the famous Nürburgring-Nordschleife, and the iconic Goodwood Festival of Speed. The fully-electric Volkswagen ID.R holds spectacular records at each of these prestigious motorsport venues. But that’s not all. The sports car will take on its next record attempt in September: The ID.R will set a target time on Tianmen Mountain in China. The goal for this extraordinary outing in the Far East is to set a milestone for electric cars and, in doing so, to support Volkswagen’s e-strategy in China, which is really picking up speed this year. By 2035, Volkswagen intends to increase the percentage of e-cars within its annual deliveries in China to 50 percent.

“The electric drivetrain heralds a new era in automobile manufacturing. Volkswagen is making an important contribution to this development with the ID. range, which is due to be launched soon. I see the ID.R as an important ambassador in this regard,” says Dr. Frank Welsch, Member of the Board of Management of Volkswagen Passenger Cars brand with responsibility for Technical Development. “The development of the ID.R and its success at iconic venues have led to a more intense transfer of technology between Volkswagen Motorsport and the various specialist departments within production development at Volkswagen. This primarily involved the electric drivetrain. For example, the motorsport experts provided production development with important findings on the design of battery cells and handling of high-voltage components in the car.”

Pikes Peak International Hill Climb 2018: Surprising coup at the “Race to the Clouds”

Volkswagen emphatically demonstrated its technical expertise at the Pikes Peak International Hill Climb with the ID.R, which was developed in just 250 days: On 24 June 2018, Romain Dumas eclipsed all those that had gone before him on “America’s Mountain”, as Pikes Peak is also known. The Frenchman and the Volkswagen ID.R smashed the previous record for the “Race to the Clouds” by about 16 seconds. Dumas and the ID.R cracked the eight-minute mark for the first time ever, with a time of 7:57.148 seconds. The ID.R also became the first fully-electric car to hold the all-time record at the legendary “Race to the Clouds”. 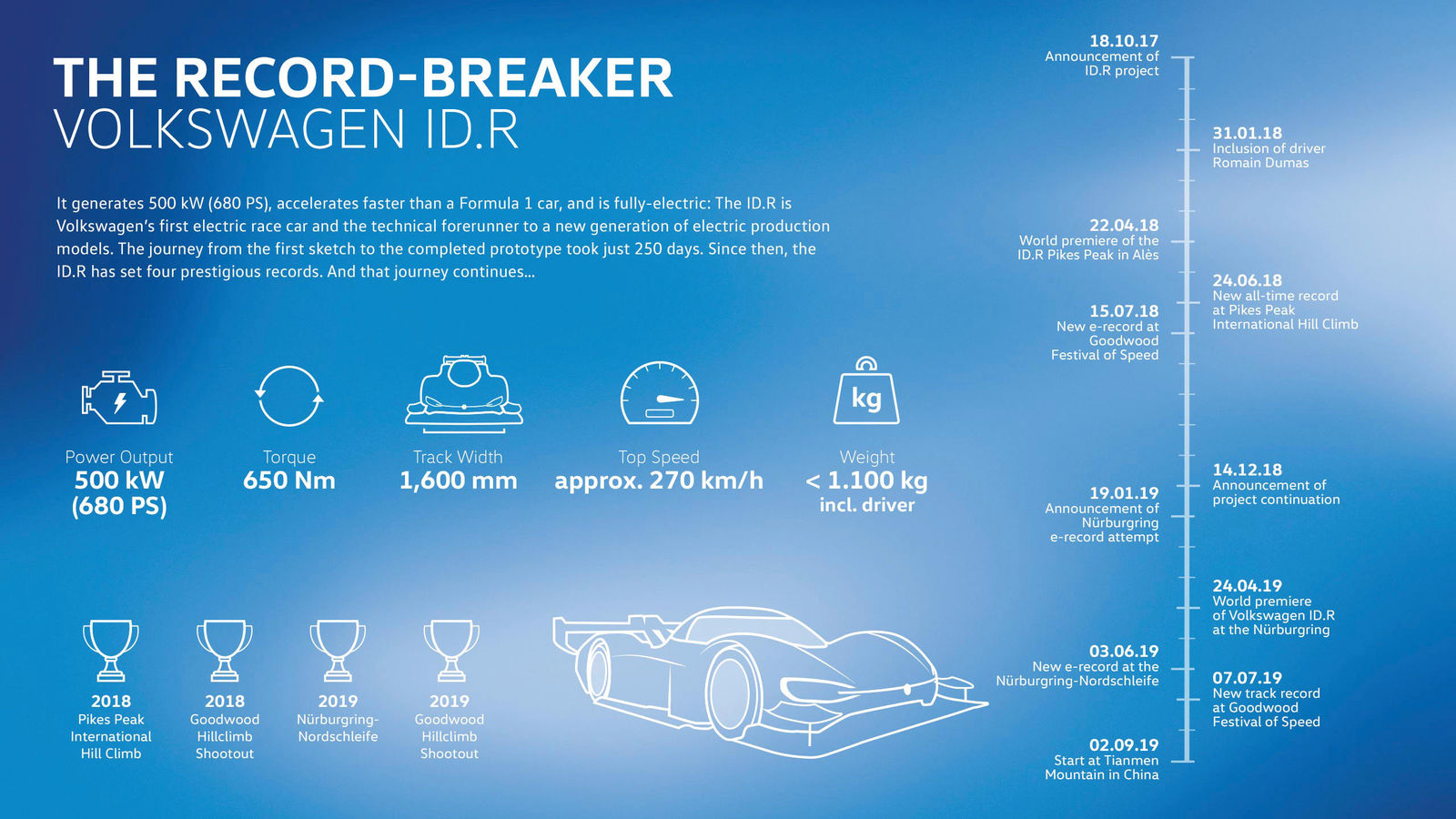 Facts & Data: The Volkswagen ID.R and its records at a glance.

This success on both a sporting and technical level was pivotal in the decision to continue to develop the ID.R and to take on new challenges. “Jeder lobt, was Nürburgring-erprobt” is written in big letters in the historic Nürburgring paddock. In English, this means infers that if you want to receive praise for a product, then you need to test it at the Nürburgring. The 20.8-kilometre circuit is regarded as the toughest in the world. The goal: A new lap record for electric cars. In order to master this challenge, the engineers had to modify the technology in the ID.R to suit the unique conditions faced on the Nordschleife. This applied in particular to the chassis set-up, energy management and ensuring that the correct tyres were selected for the record attempt. Unlike Pikes Peak, the “Green Hell” features long straights with high-speed sections – something the original version of the ID.R was not designed for. The effort paid off: In June 2019, Romain Dumas once again made history at the wheel of the ID.R, setting a time of 6:05.336 minutes to break the previous record for electric cars by roughly 40 seconds.

The next challenge was the famous sprint in the south of England. Back in July 2018, Dumas broke the record for electric cars at the Goodwood Festival of Speed at the first attempt with the ID.R. exactly one year later, the same duo lined up again at the popular event – and laid down the ultimate marker: With a time of 39.90 seconds, Dumas broke the previous all-time record – set 20 years ago by a McLaren MP4/13 Formula 1 car – by 1.7 seconds.

“With the records we have set so far, we have consciously pushed cutting-edge e-mobility technology to the limit at iconic venues,” said Volkswagen Motorsport Director Sven Smeets. “In doing so, we wanted to show what electric cars are capable of. The records and the entirely positive response have shown that e-mobility will have a positive effect on our everyday life in the near future. We are pleased to be the forerunners of this pioneering Volkswagen technology with the ID.R.”

The ID.R’s record-breaking journey continues: Following the record-breaking outings in USA and Europe, Volkswagen has now turned its attention to the important, growing market in China. Tianmen Shan Big Gate Road in China is a spectacular mountain road, which climbs up the 1,519-metre Tianmen Mountain via 99 corners. For the moment, this is probably the most spectacular stretch of asphalt that the Volkswagen ID.R will set wheel on: Incredibly narrow, incredibly steep, and extremely winding – this road is a real challenge. Starting at 200 metres above sea level, it snakes its way along steep rock faces to a height of 1,300 metres and the so-called “Heaven’s Gate”. The ID.R will do pioneering work in September 2019 – never before has Tianmen Mountain hosted this kind of challenge.

The ID.R has successfully played its pioneering role within the ID. family, and will surely continue to do so. 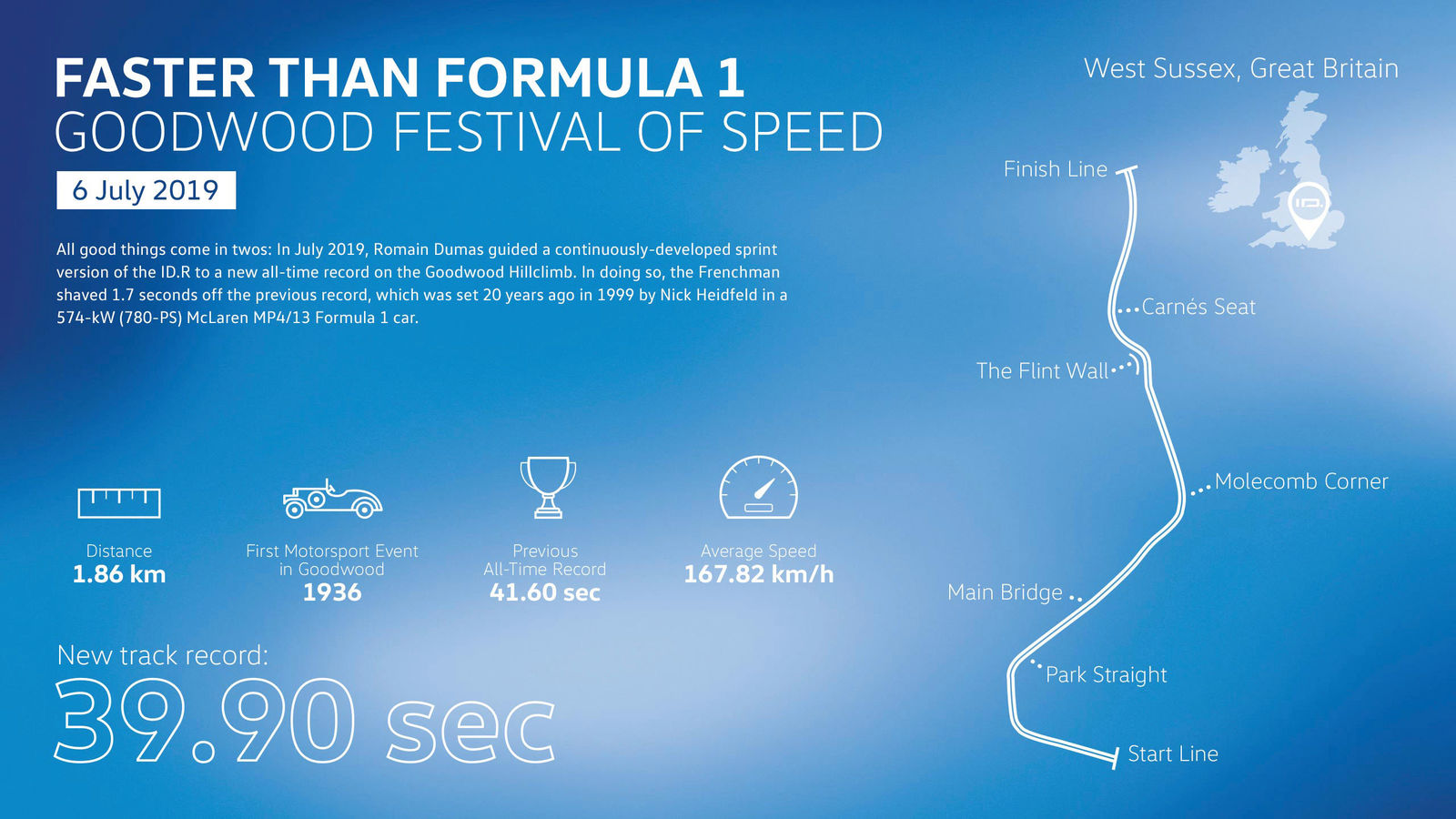 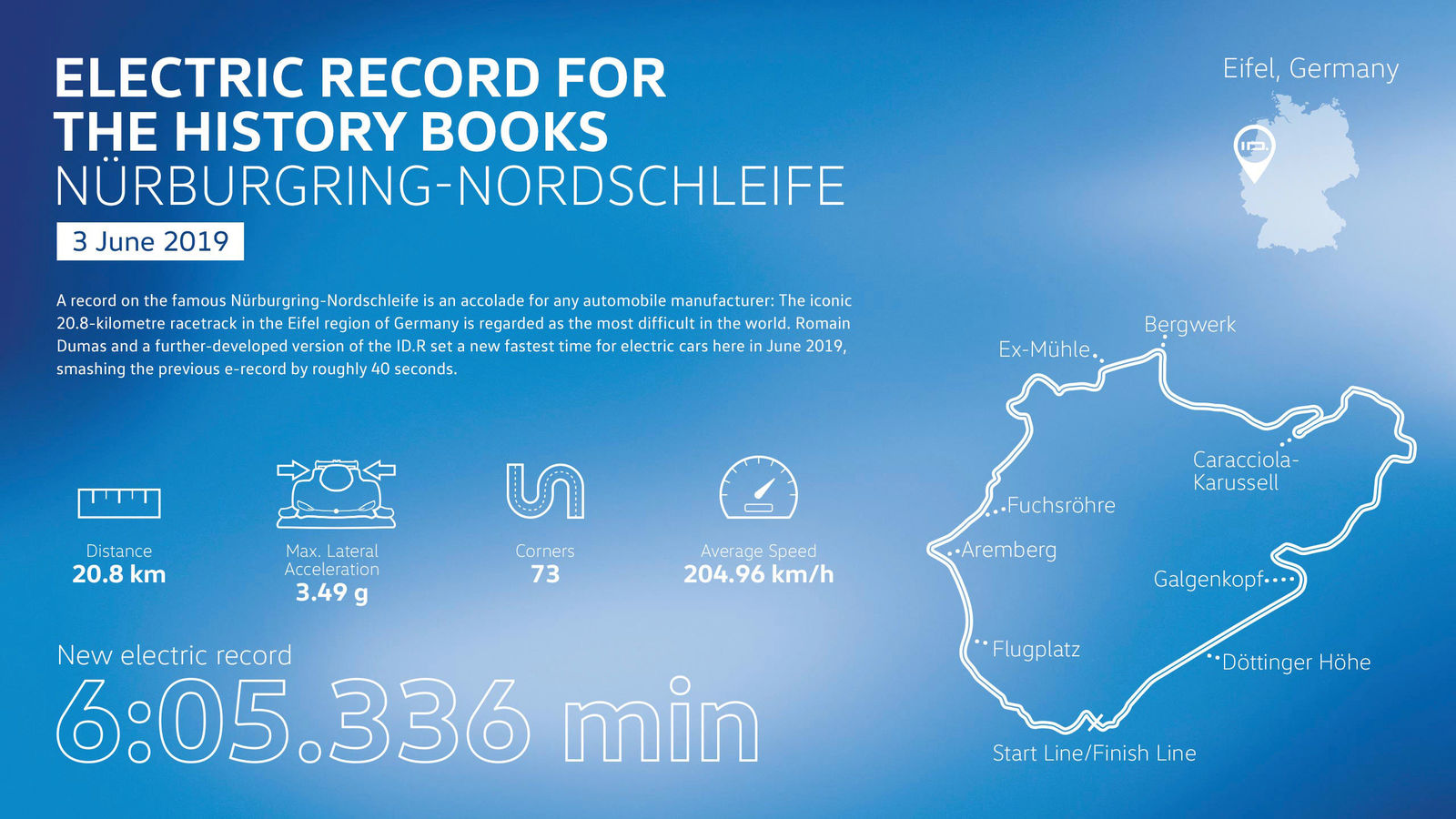 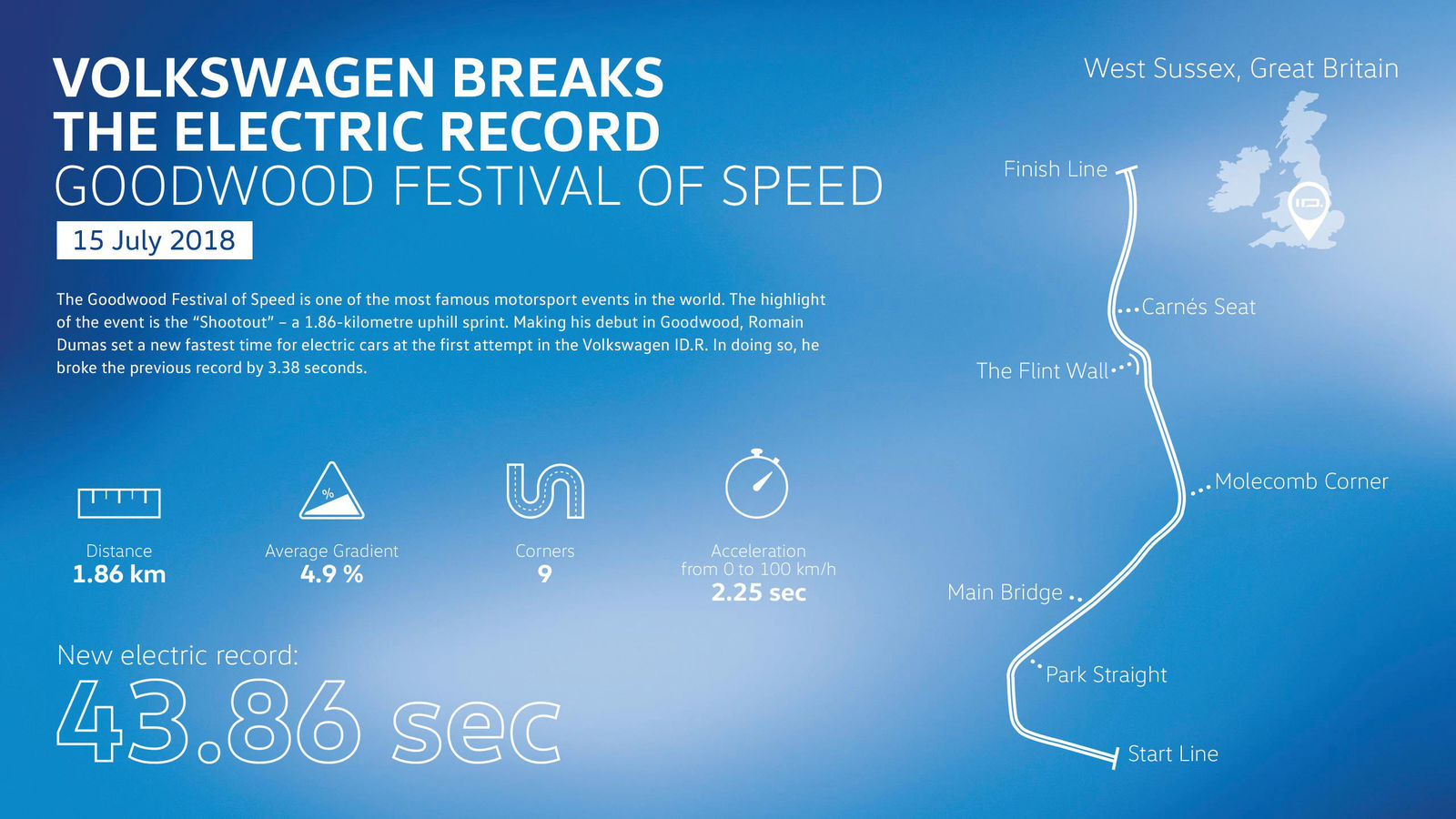 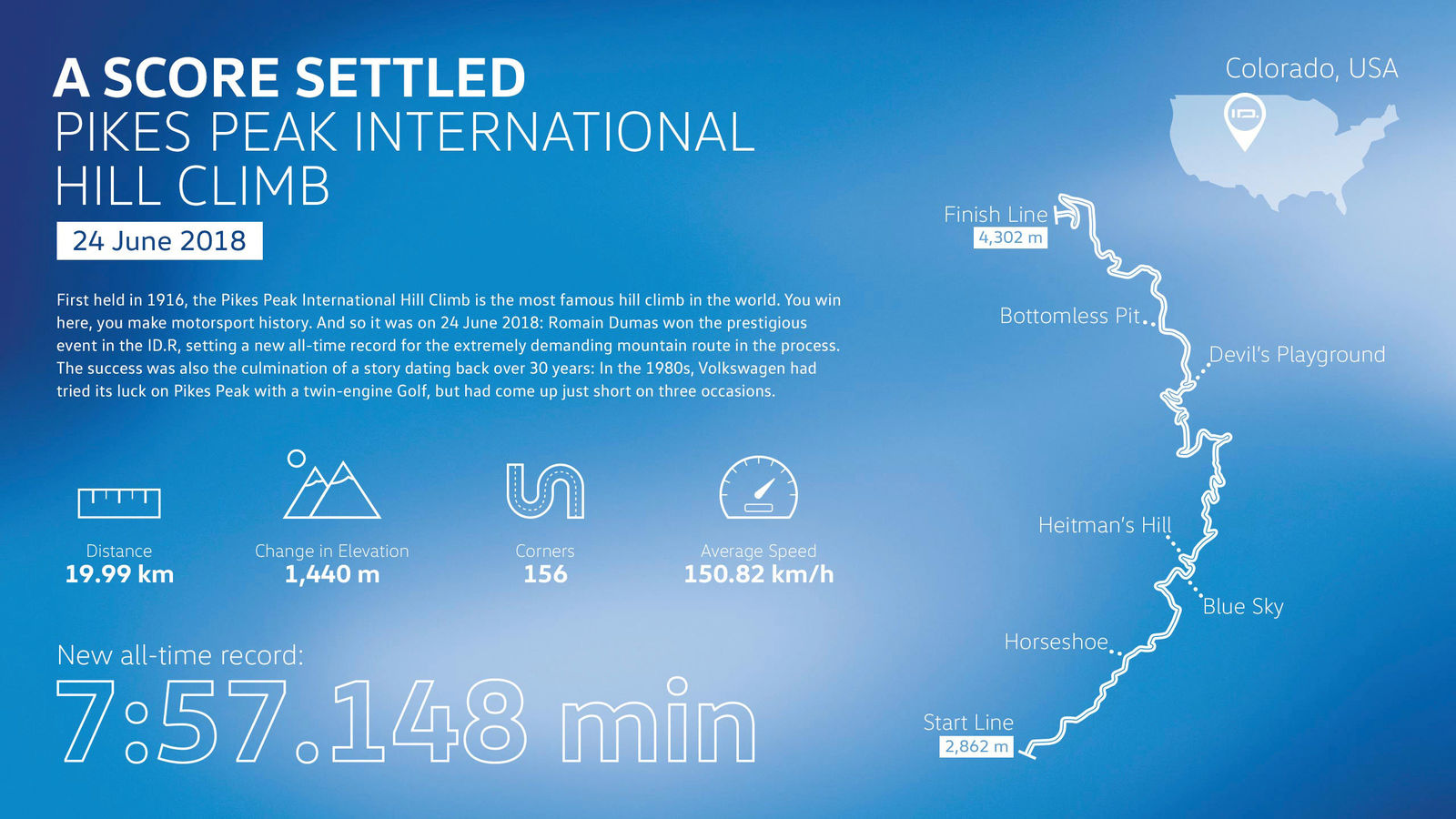