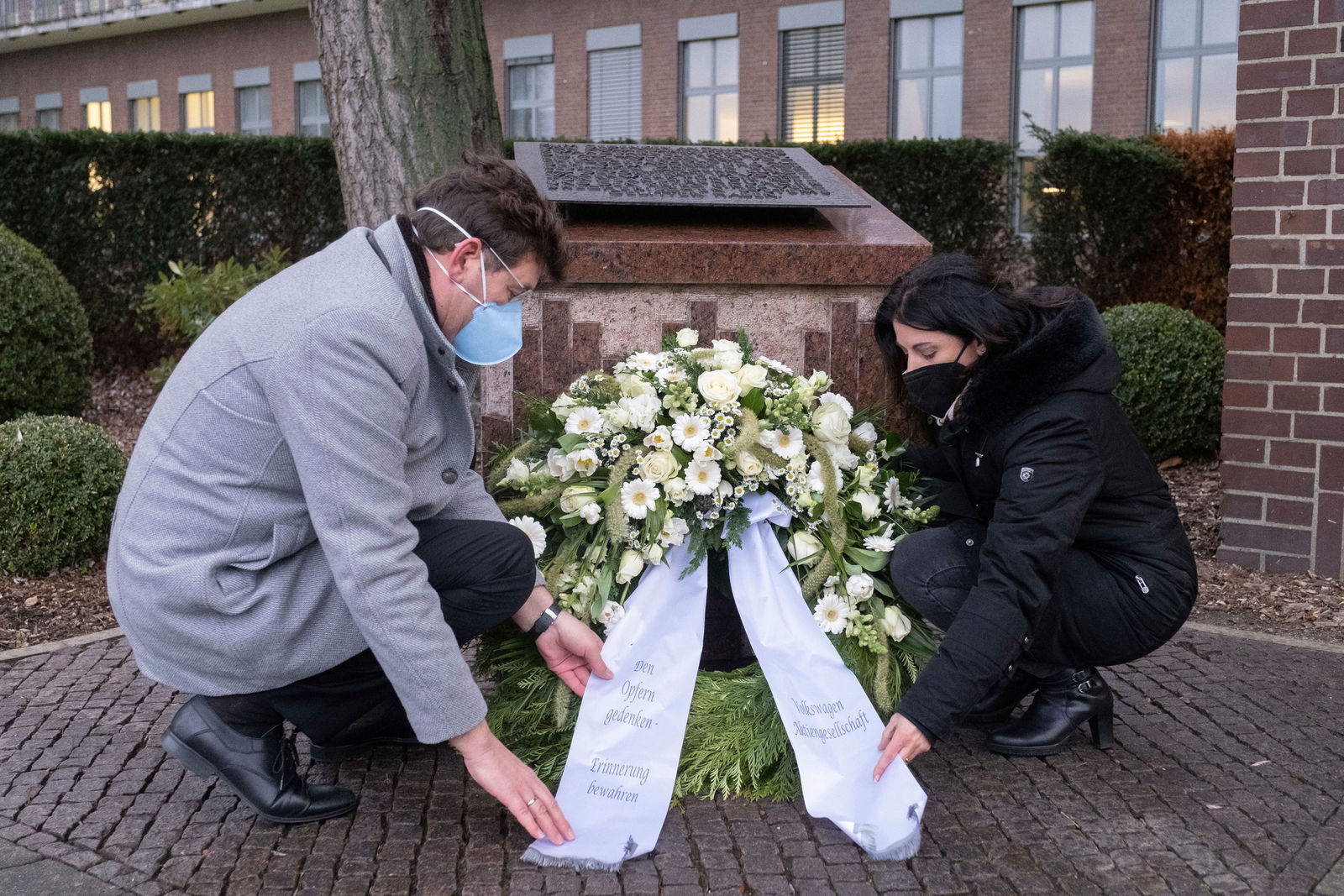 Gunnar Kilian and Daniela Cavallo are laying a wreath at the memorial stone at the Wolfsburg plant.
01/27/22
Wolfsburg
Company
Press Release

Volkswagen commemorates the victims of the Holocaust

On the occasion of today’s International Holocaust Memorial Day, Volkswagen commemorated the victims of National Socialism by laying a wreath at the Wolfsburg plant. In accordance with the current Corona regulations, Group Human Resources Director Gunnar Kilian, Plant Manager Dr. Rainer Fessel and Group Works Council Chairwoman Daniela Cavallo laid a wreath at the memorial stone in Südstraße at the Wolfsburg plant on behalf of the workforce.

On the occasion of today’s Day of Remembrance for the Victims of National Socialism, Group Human Resources Director Gunnar Kilian, Plant Manager Dr. Rainer Fessel and Group Works Council Chairwoman Daniela Cavallo laid a wreath at the memorial stone at the Wolfsburg plant on behalf of the workforce. The day has long since become an integral part of Volkswagen’s culture of remembrance. The company and its workforce are committed to this tradition. In the years before the pandemic, Volkswagen employees always followed the tradition of laying wreaths to commemorate the victims of the Holocaust.

With the nationwide #LichtZeigen (#ShowLight) campaign, in which Volkswagen is also participating, the company’s employees can continue to actively set an example against exclusion, violence and forgetting on Holocaust Remembrance Day, regardless of the pandemic. Gunnar Kilian, Member of the Board of Management for Group Human Resources, also took part in the symbolic action, sending a clear signal against forgetting: “Together with the International Auschwitz Committee, the Volkswagen Group and many of our employees have been committed for decades to ensuring that the National Socialist atrocities and the victims of tyranny are not forgotten. And we continue to do so! That’s why we are setting another example and taking part in the ‘Show Light’ campaign of the Yad Vashem Circle of Friends.”

Daniela Cavallo, Chairwoman of the Group Works Council, says: “When we remember, it must not only be about the crimes of that time. It must also be clear to us that responsibility must grow out of remembrance – as Volkswagen is doing in an exemplary manner. Remembrance must not become an automatism, not an interchangeable compulsory exercise.” Cavallo refers to a legacy of the president of the International Auschwitz Committee, Roman Kent, who died in 2021, according to which actions are just as existential as thoughts. “So let us take action!” said Cavallo, who has been chairwoman of the workers’ representation since April 2021 and attended the wreath-laying ceremony for the first time in this new capacity. Cavallo named the dwindling number of Holocaust witnesses as well as new ways of commemorating in times of the pandemic as fields of action for Volkswagen. She also called for participation in the #LichtZeigen #ShowLight campaign.

Volkswagen has been engaged in ongoing remembrance work for many years. The company has been working with the International Auschwitz Committee (IAK) for 33 years. Every year, apprentices from the group travel to Auschwitz to play an active role in the preservation of the memorial site and to learn about history.

Volkswagen is constantly striving to adapt its remembrance work to the changing conditions in society as a whole and to cultivate a sustainable culture of remembrance. To this end, Volkswagen Heritage spoke with the Jewish author Mirna Funk. In it, she explains how Jewish culture deals with remembrance and what we can learn from it. She talks about the triad of past, present and future, about how to shape the future with memory.

Note to the editors: You can find the interview entitled “Vom Dreiklang der Erinnerung” (On the triad of memory) with video clips at www.volkswagenag.com. 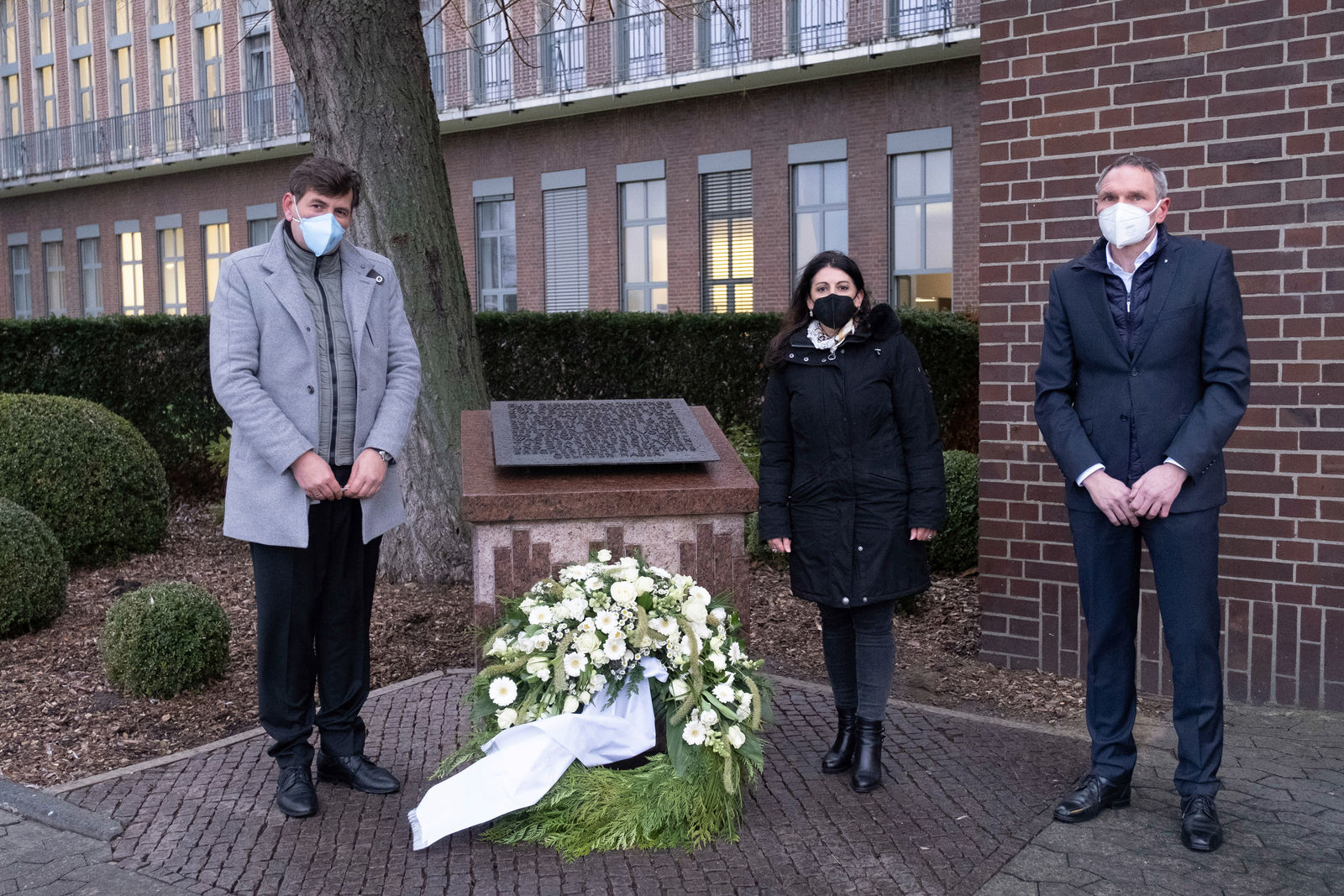