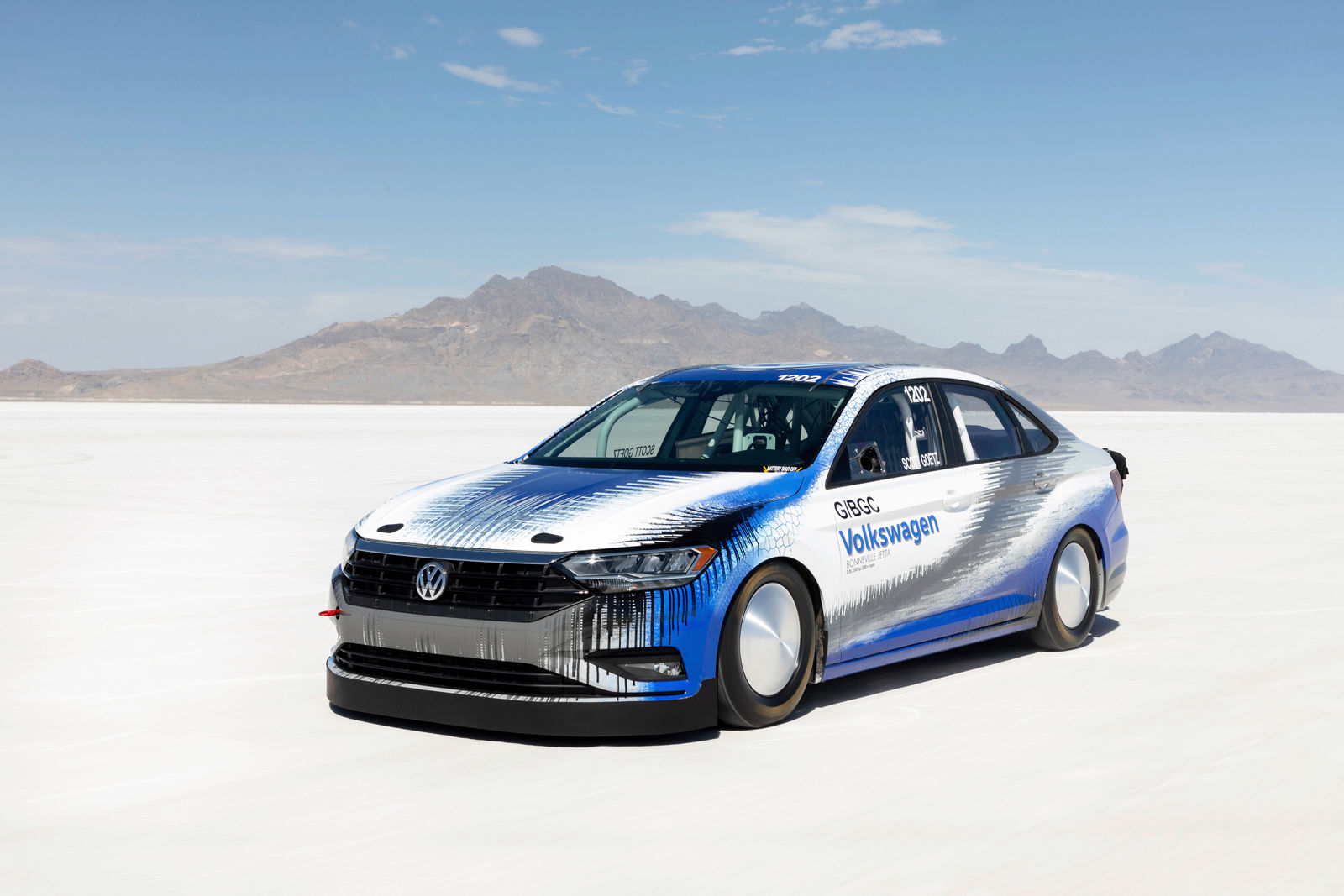 Volkswagen of America has demonstrated the potential of the new Jetta at the Bonneville Salt Flats in the USA. Here a specially equipped Jetta broke the previous world speed record of its class for land vehicles with 338 km/h. Only a few weeks after the success of the electrically powered I.D R Pikes Peak at the “Race To The Clouds” in the Rocky Mountains and at Goodwood Hill Climb in the UK, Volkswagen has secured its third record.

A four-cylinder turbo engine (TSI) from the EA888 series was responsible for the powerful propulsion of the new Jetta. This engine is also used in other sporty Volkswagen models such as the Golf GTI Performance (180 kW / 245 PS). For the record-breaking rides, the power of the sports car engine was increased to 447 kW / 608 PS (at 8,500 rpm). Volkswagen engineers used new connecting rods, pistons, valves and camshafts as well as a larger turbocharger and a new exhaust system. The standard cylinder block and crankshaft remained unchanged.

The powerful TSI engine had an easy time with the new Jetta, as this Volkswagen is extremely aerodynamic. Thanks to a drag coefficient of 0.27, the Jetta raced with particularly low resistance through the dry air at Bonneville Salt Flats in the US state of Utah. It broke the previous record of 335.50 km/h (208.47 mph) with exactly 338.15 km/h (210.16 mph) in the BGC/G class of the Southern California Timing Association.

“The achievement of this speed in Bonneville proves the quality, durability, performance and efficiency of Volkswagen TSI engines and the aerodynamic performance of the new Jetta,” says Hinrich J. Woebcken, President and CEO of Volkswagen of America. Woebcken continues: “This record highlights the sporty qualities of our Jetta. It also provides a look into the future of the sedan, as we are using a modified version of the EA888 in the record-breaking car. This powerful TSI will also be used in the new Jetta GLI in the future.”

Achieving speeds of well over 300 km/h on the Salt Flats places special demands on the vehicle. The recording-breaking Jetta therefore features technical details such as a lowered chassis, special wheels and tyres for the Salt Flats, a limited slip differential for optimum traction and two brake parachutes at the rear. The interior was also completely cleared out. Only the controls for driving, a bucket seat with racing belts, a stable rollover cage and a fire extinguishing system remained.

The Jetta was built by Volkswagen of America together with the technicians of THR Manufacturing in Ventura, California (USA), who specialise in record-breaking driving of this type. The Salt Flats veteran Scott Goetz was at the wheel of the Volkswagen. “It was a great experience driving this car on the Salt Flats. Even at top speed, the Jetta provided a safe driving experience and I'm very happy we broke the record.” 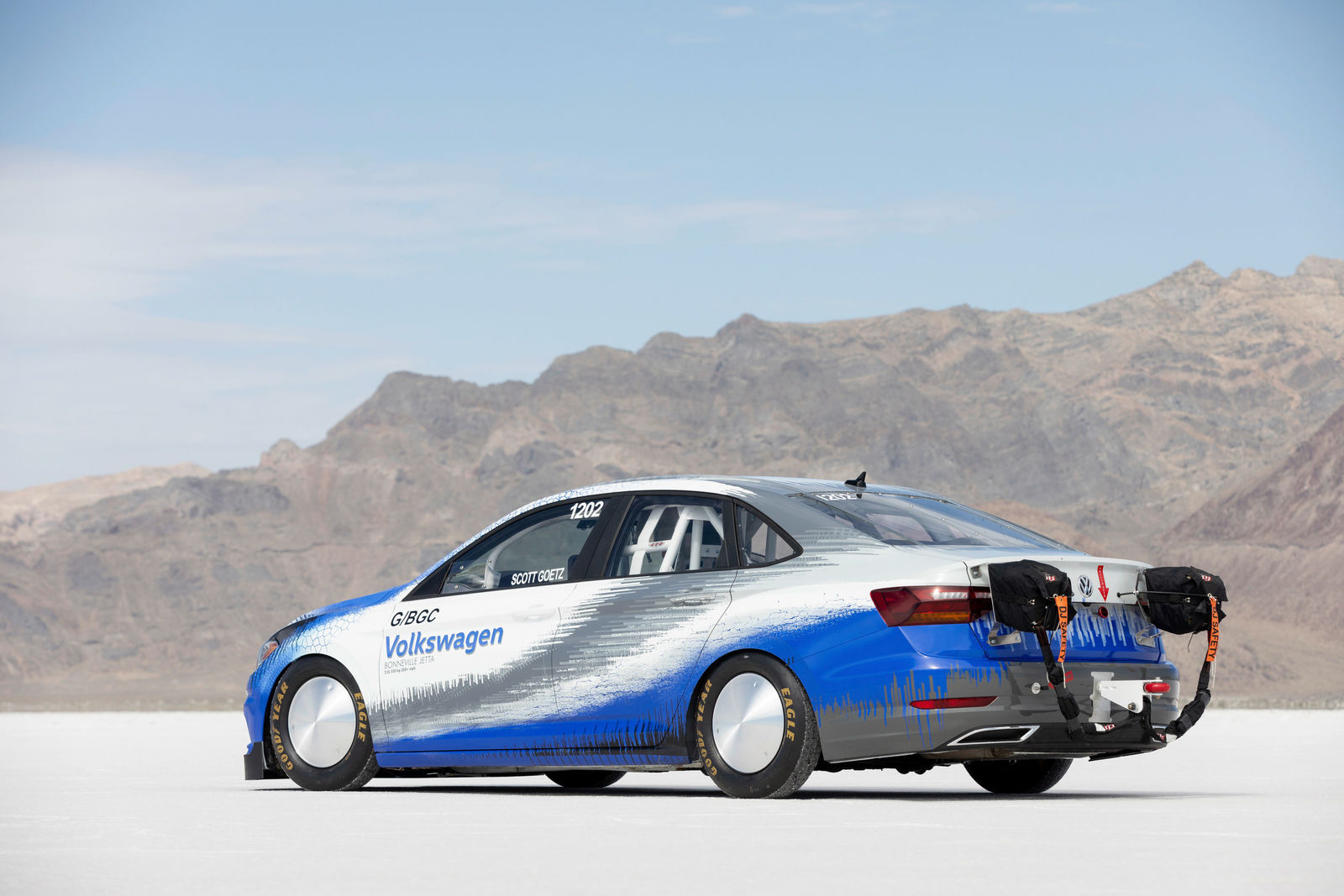 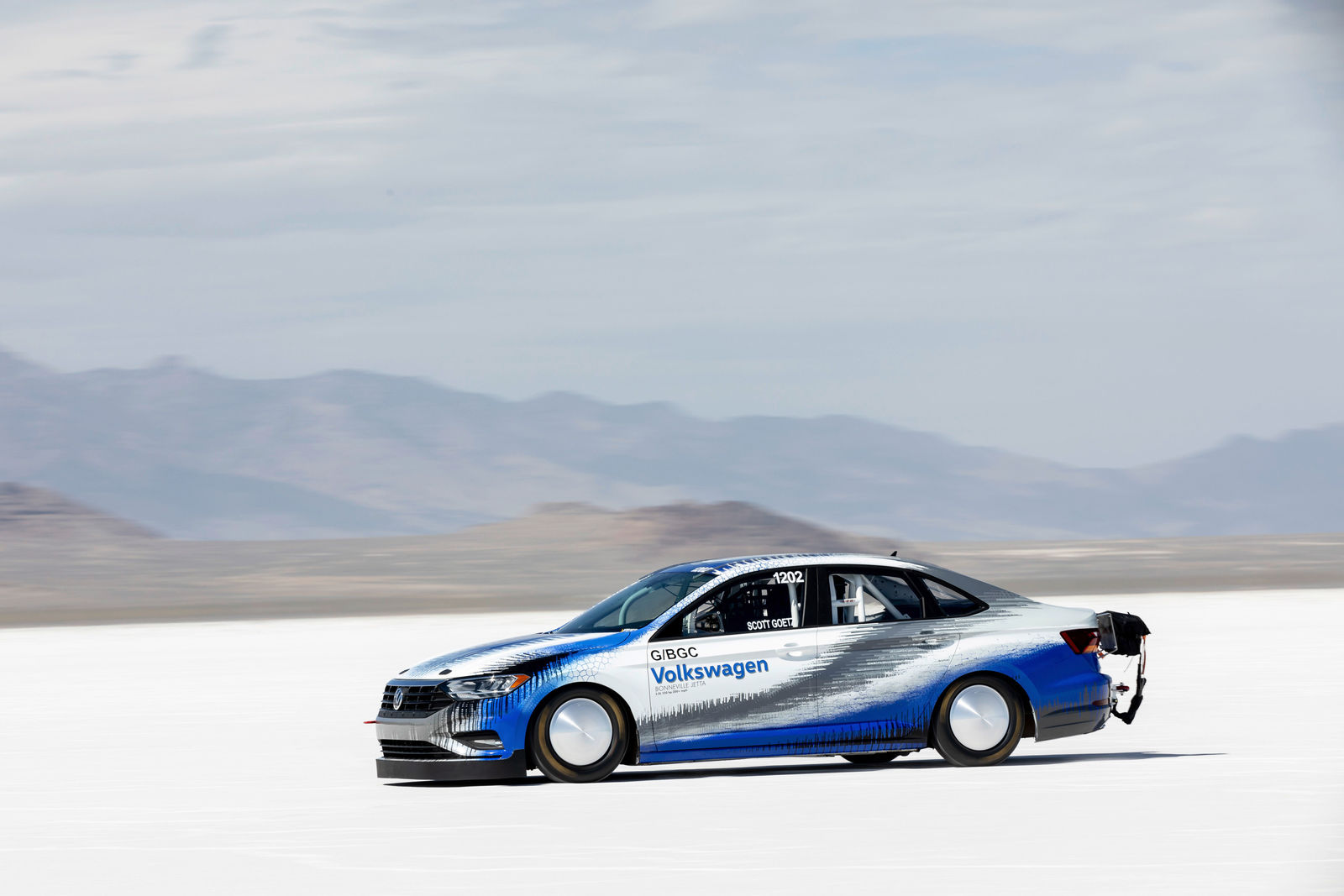 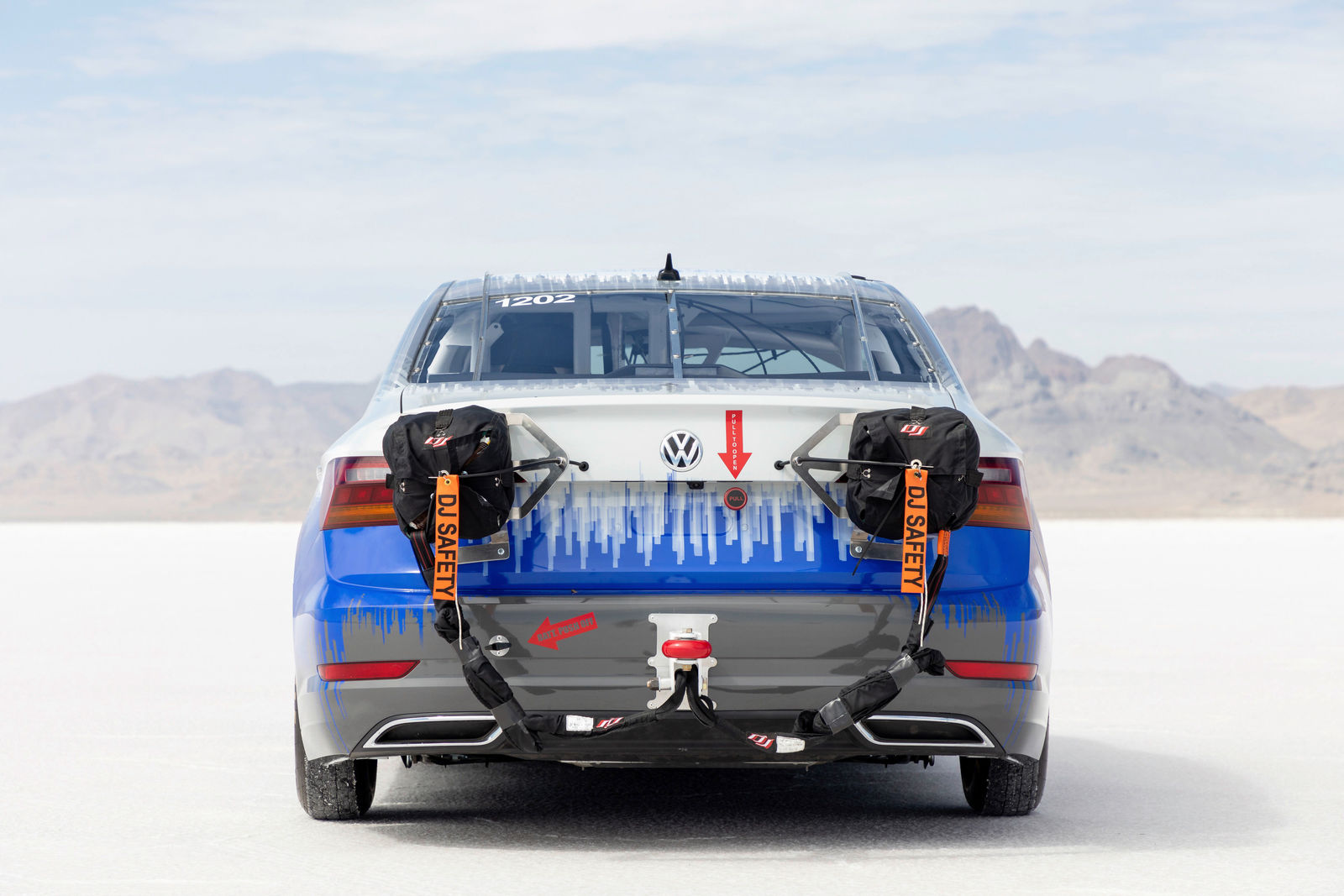 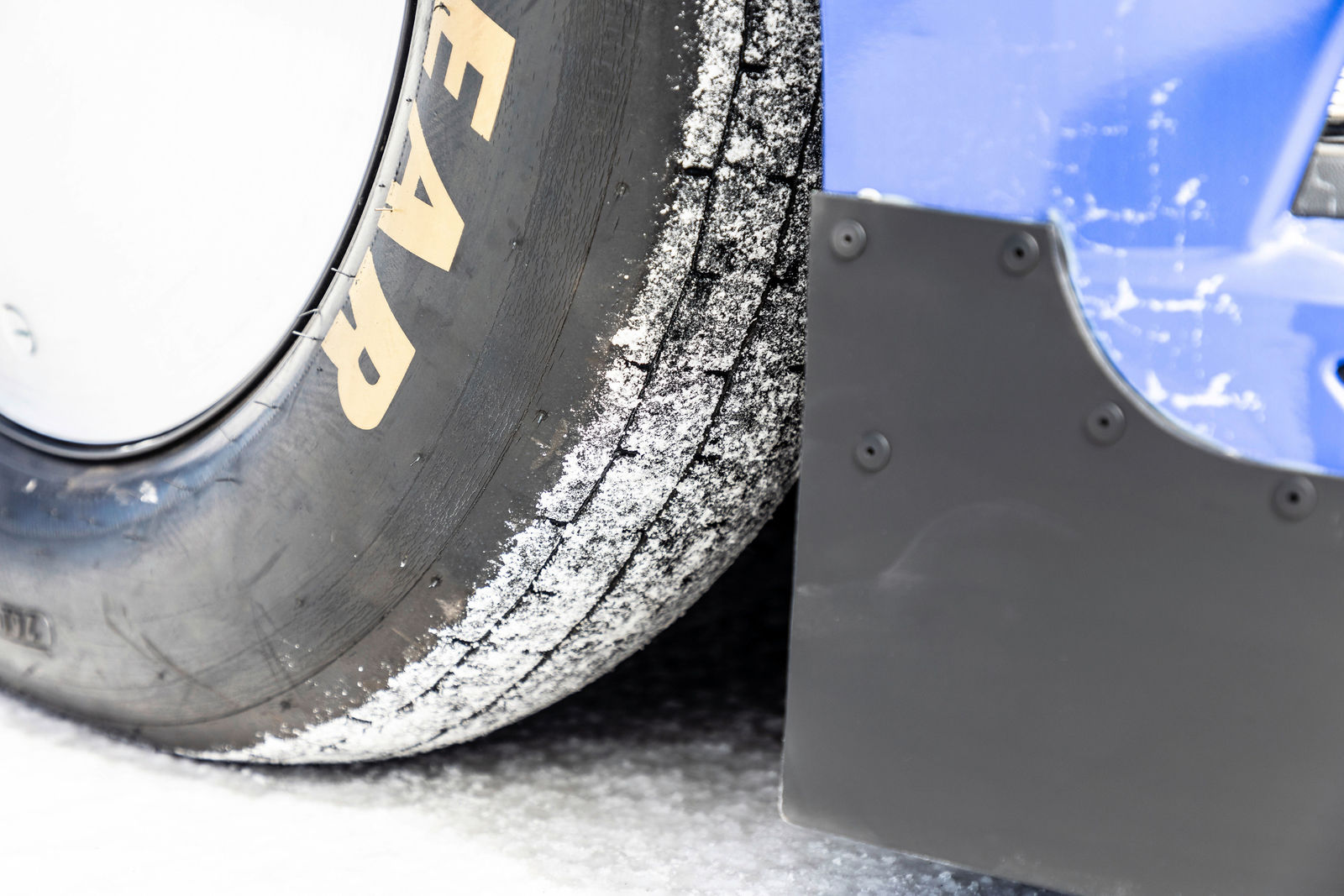