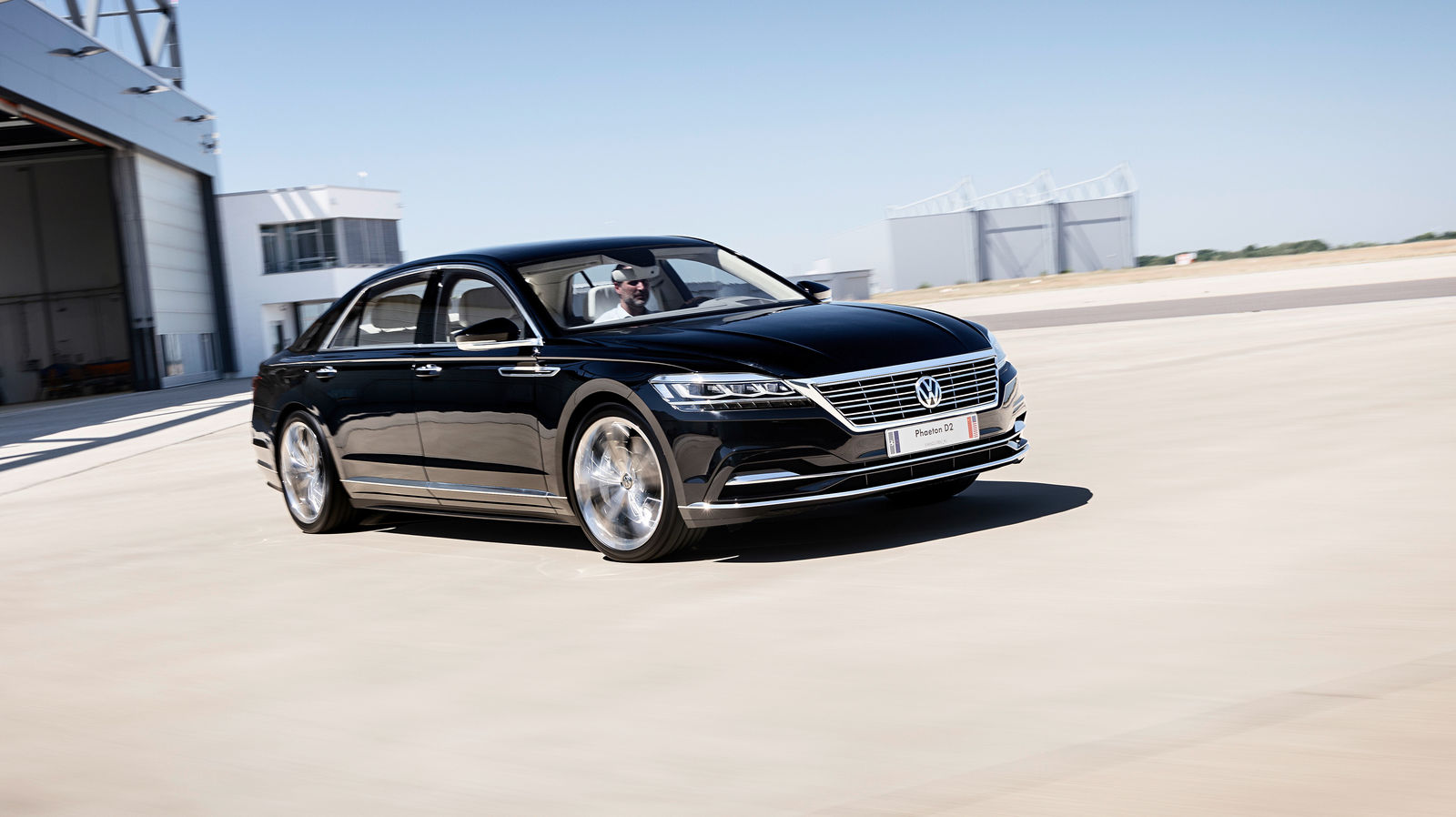 20 years of the Phaeton: For the first time, Volkswagen shows the successor that was never built

It was a car for connoisseurs, individualists and enthusiasts: Volkswagen launched the Phaeton on the market 20 years ago. From 2002 onwards, the luxury saloon fascinated with its confident, calm and collected character, excellent comfort, high-tech features and impressive manufacturing quality. Volkswagen took its first steps into the luxury car segment with the Phaeton and immediately proved that it was at home in this premium market. The Phaeton acted as a shining star that benefited the whole brand and paved the way for other premium products such as the Touareg and Arteon. Its farewell came in 2016 when the Brand Board of Management decided to discontinue the saloon in favour of a systematic re-alignment with a focus on electric mobility – although the successor with the project name “Phaeton D2” was already waiting in the wings. 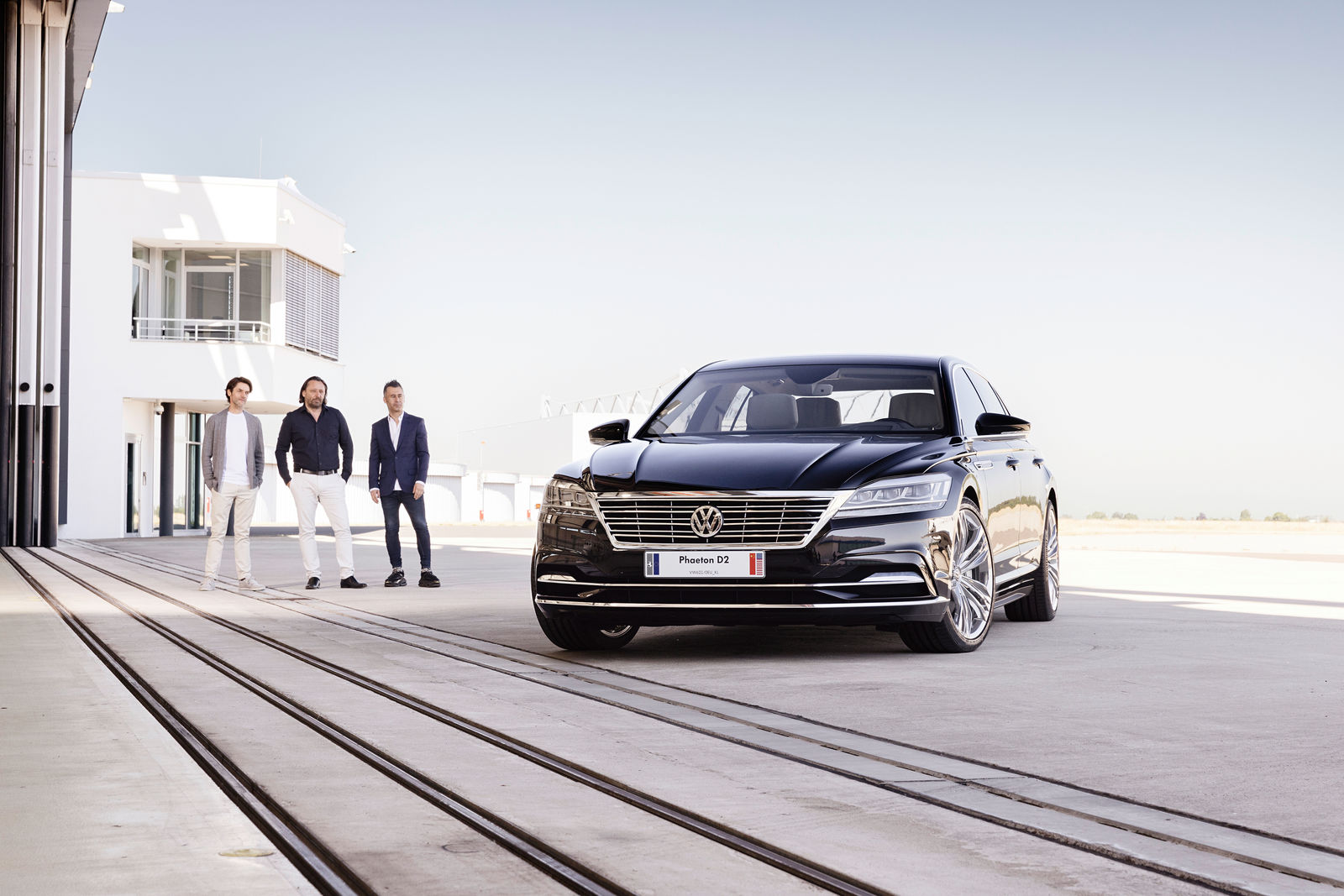 Jozef Kabaň, Head of Volkswagen Design, today looks full of respect at the Volkswagen Phaeton D2, which never went into series production: “The car still has a very attractive appearance and beautiful proportions, and it impresses with its tangible high quality and value.” Together with his colleagues Marco Pavone, Head of Exterior Design, and Tomasz Bachorski, Head of Interior Design, Kabaň is currently responsible for designing the future Volkswagen models. Attributes such as quality and value, which characterised the Phaeton right from the start and underlined its premium aspirations, still play an important part at Volkswagen today.

The drivable one-off Phaeton D2 model was preceded by an internal selection process to choose from four different concepts. The design produced by Pavone and Bachorski got the nod, impressing with its sporty and flat contours and high-quality interior. The near-series prototype, which was based on the modular longitudinal matrix (MLB), was then built for the final decision by the Supervisory Board. However, since all energies were focused on aligning Volkswagen for electric mobility, it was decided not to proceed with the luxury saloon.

Even if the planned successor model was not realised as a result of this decision, the first Phaeton demonstrated what Volkswagen was already capable of 20 years ago with its luxury comfort, innovative drive systems and pioneering finish quality. It therefore achieved halo effects for the whole brand, which can still be experienced in many models right up to the present day. Tomasz Bachorski, responsible for the interior of the premium model back then, says: “The fact that the Phaeton D2 was ahead of its time can be seen today in features such as the curved display, which was planned for the Phaeton successor and which was launched on the market in 2018 in the Touareg’s Innovision Cockpit.” 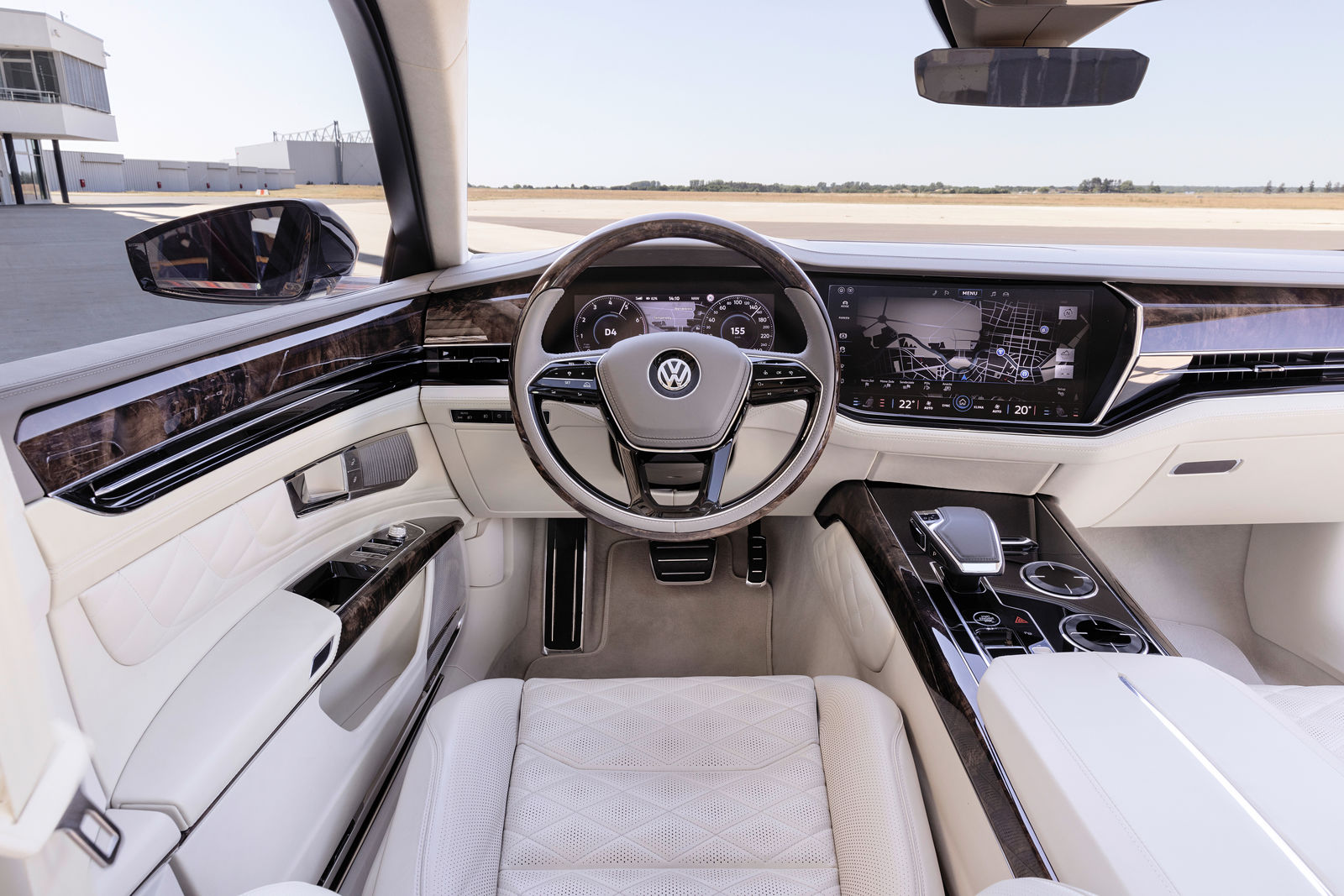 View into the interior of the Phaeton D2.

Looking back on 20 years of the Phaeton – entry into the luxury segment.The project launched by former Volkswagen Chair of the Board of Management Ferdinand Piëch at the end of the nineties was ambitious right from the start. He wanted to open up a new market segment for Volkswagen with a luxury saloon and at the same time take the whole brand to a new level.

5.06 metres long, 1.90 metres wide, 1.45 metres high – these dimensions alone meant a place for the Phaeton among its competitors in the luxury segment. However, in spite of its size, its visual appearance was understated. Its flowing design with slightly domed roof lines created a timeless and unostentatious appearance. The only stand-out features were the round tail light clusters at the rear installed under rectangular cover glass elements.

Elegance and highest quality materials. The calm contours of the body accommodated an interior that exuded stylish elegance. Chrome, wood veneer comprising up to 30 material layers and leather – this trio came together on the selector lever of the automatic gearbox, which seemed as solid and powerful as the thrust lever on a motor yacht. Wooden panels covered the vents, which opened electrically and silently when required depending on the setting of the automatic air conditioner and solar radiation. The ventilation operated almost without draughts even at the highest setting.

Lounge on wheels. The interior of the Phaeton was a mobile lounge, in which uncompromising quality and premium materials were combined with lovingly arranged technical details. The vehicle occupants were isolated from the outside world by doors that closed with a satisfying thud and thick glass panes, while the gaps between components were extremely narrow and strictly parallel. The optional Dynaudio sound system also satisfied the ears of discerning hi-fi enthusiasts.

The Phaeton really came into its own on long journeys. Its standard pneumatic suspension with adaptive damping allowed it to glide smoothly and softly on the motorway. Thanks to its extremely high torsional rigidity, the body did not rattle or creak at all. The bonnet, doors and boot lid were made of aluminium. A Phaeton version lengthened by 120 millimetres with opulent space at the rear of the passenger compartment was also available as a chauffeur model. Individual seats with massage and ventilation were optionally available – like in the standard version.

The name Phaeton also symbolised the exclusive status of the large saloon. This was not just a reference to Greek mythology, but also represented a link to classic models from Horch and Ŝkoda with the same name. 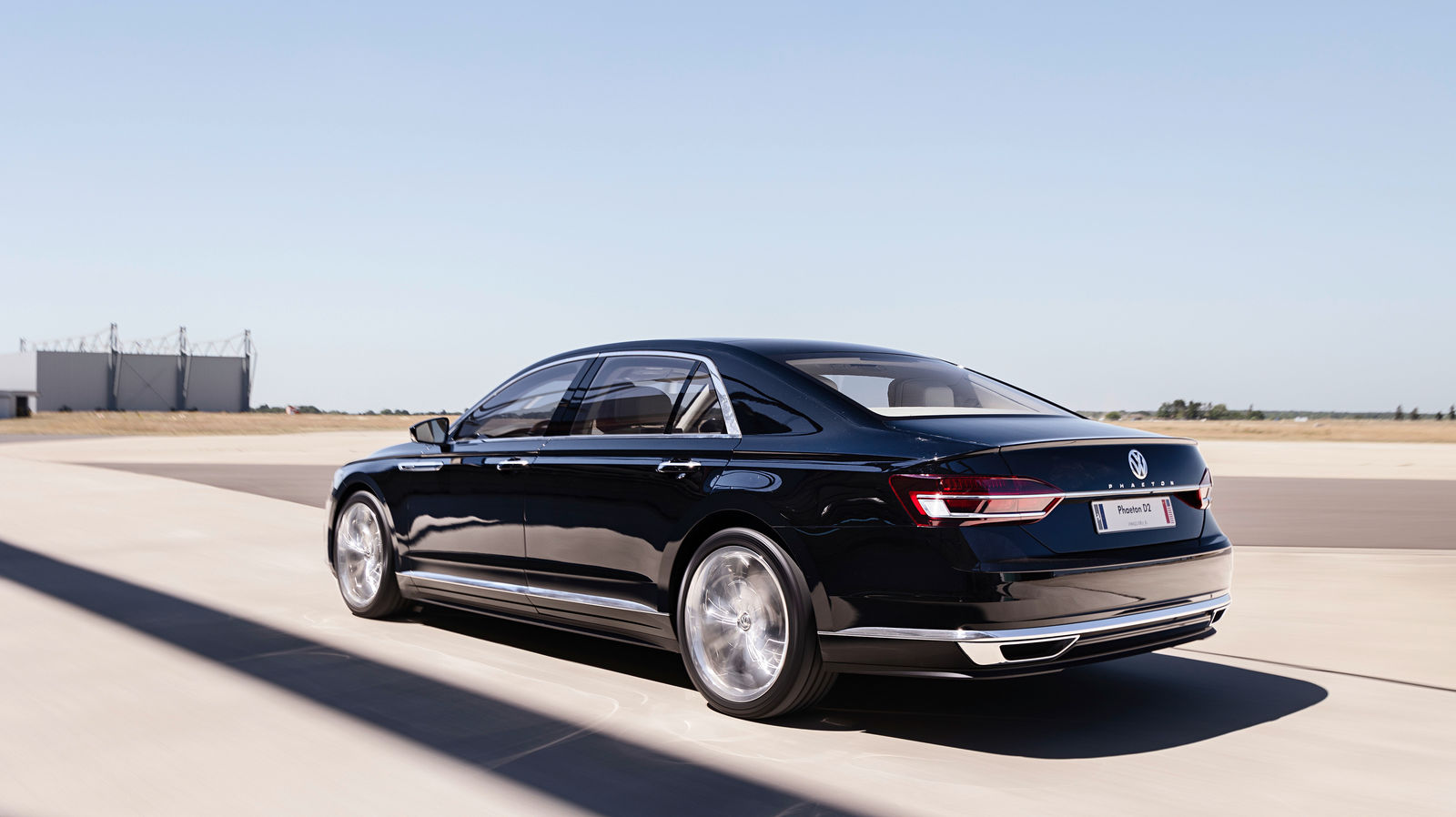 The Gläserne Manufaktur as a transparent factory. At the start of production in Dresden in December 2001, Ferdinand Piëch summed things up in a nutshell: “In this location we will manufacture Volkswagen’s flagship vehicle in the luxury car segment. It will be possible to both see and feel the finest hand craftsmanship and state-of-the-art technology here.”

Only the very best was good enough for the new flagship – and the same was also true of the production plant. The Gläserne Manufaktur was built on the outskirts of Dresden, an industrial facility embodying high architectural quality. The Phaeton was assembled almost completely by hand in light-flooded halls. The employees were clothed in white and many of them wore gloves. And the hall floors were covered with light mountain maple wood from Canada and dark German moor oak.

Two petrol engines and one TDI. The engine range rounded off the exclusive character of the saloon. Early Phaeton customers were able to choose between two naturally-aspirated petrol engines and a TDI. The entry-level engine was the compact 3.2 V6, whose cylinder banks were arranged at a narrow angle of 15 degrees to each other; it had an output of 177 kW (241 PS). The second petrol engine, the W12, was also unusually short – it was built in the form of a “W” using two V6 engines. This engine developed 309 kW (420 PS) from a capacity of six litres.

V10 TDI with 750 Nm. The most unusual engine was the V10 TDI. With a capacity of five litres, two turbochargers with variable turbine geometry, an output of 230 kW (313 PS) and a torque of 750 Nm, this engine made the Phaeton the most powerful diesel saloon in the world at the time. Like with the W12, the drive power was transmitted to all four wheels via an automatic gearbox and the 4MOTION all-wheel drive system; the 3.2 V6 came with front-wheel drive as standard.

The engine range was repeatedly enhanced over the course of the 15 years of production. In 2003, a 4.2-litre V8 engine was introduced for the luxury saloon. This was followed one year later by the 3.0 V6 TDI. This quickly became the most popular engine variant, and it had an output of 180 kW (245 PS) in the last version. The ten-cylinder diesel engine was discontinued in 2006, and the W12 five years later. And the 3.2 V6 was replaced by a 3.6-litre engine and a 3.0-litre version.

Always up to date. The Phaeton was kept up to date by four model enhancements, which were introduced between 2007 and 2014. They included new features such as a multimedia system with touchscreen, carbon-ceramic brakes for the W12, assist systems such as Rear Assist, Side Assist and improved ACC, camera-based Dynamic Road Sign Display and advanced main-beam control. For a few years there were also self-luminous number plates featuring electroluminescence technology. The major facelift in 2010 brought a new look at the front and rear, which was especially popular among customers in China. 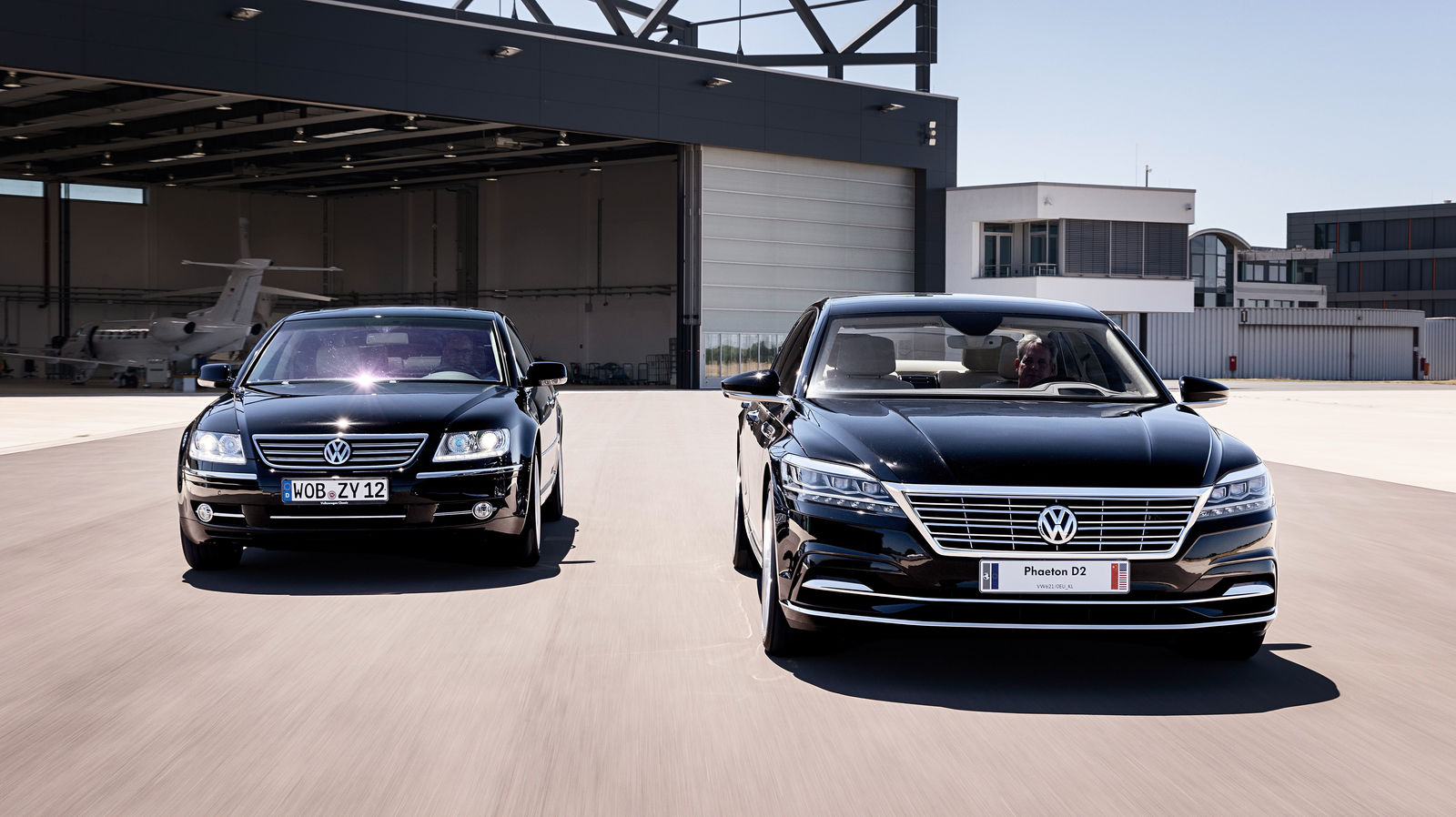 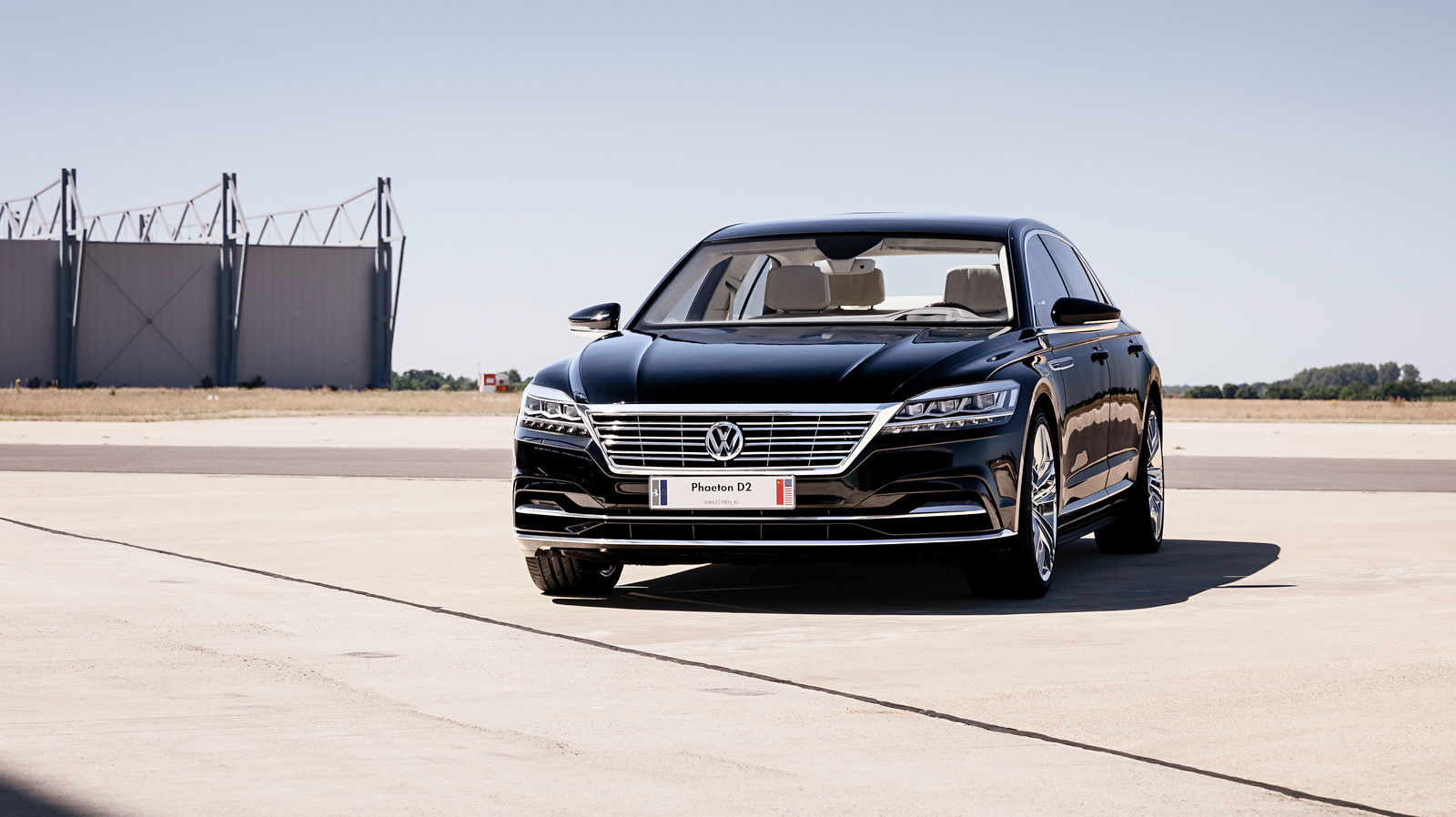 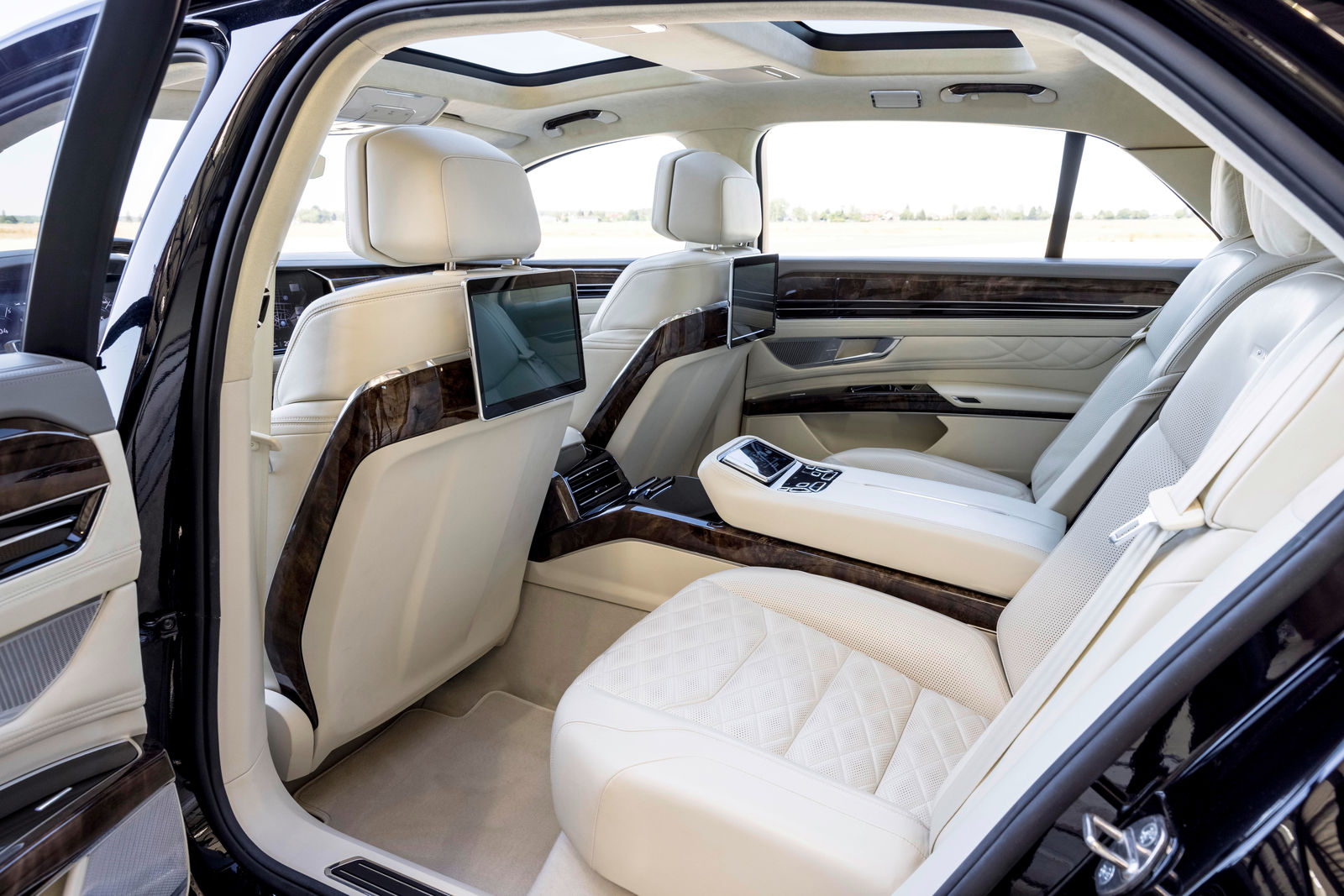 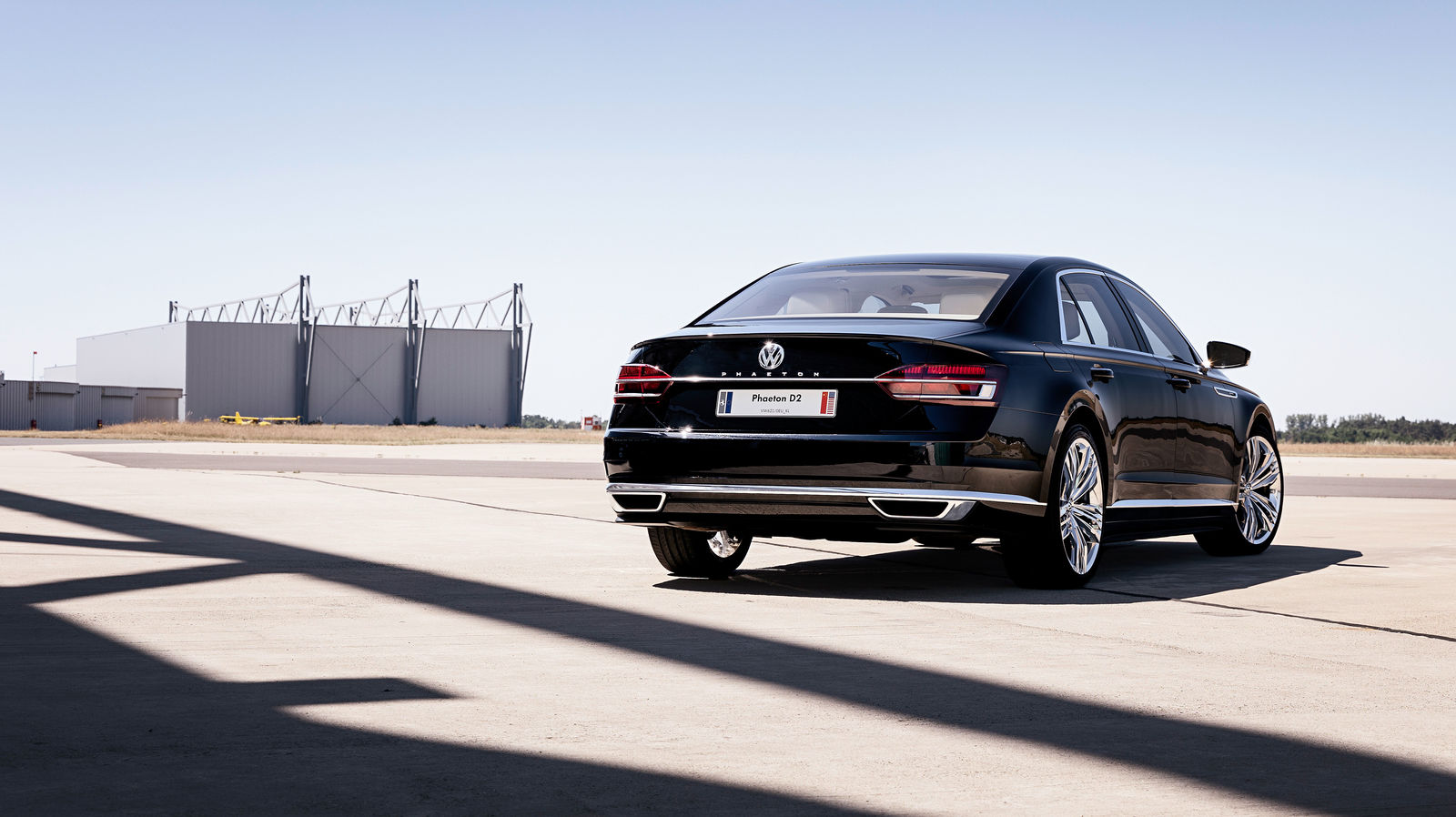