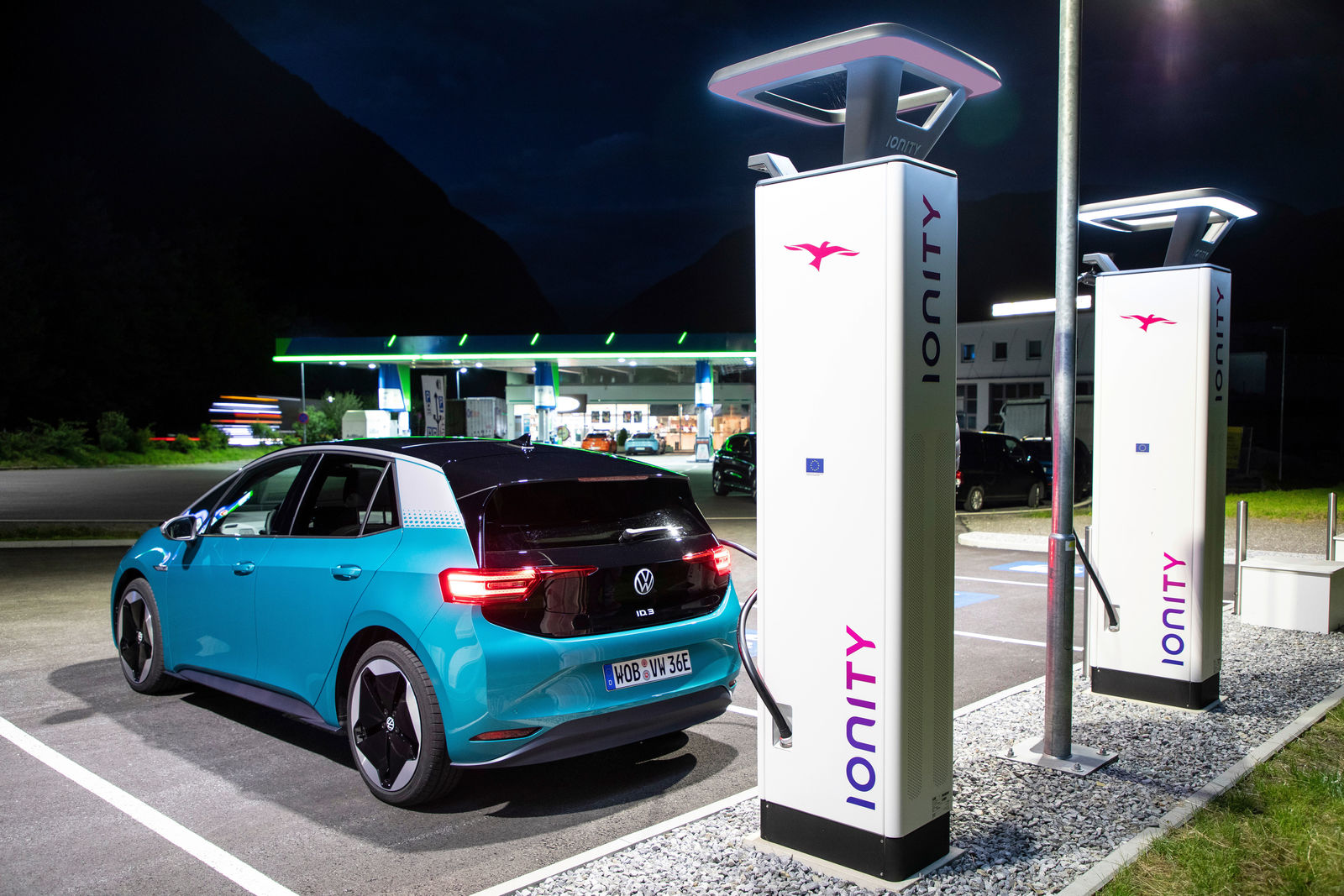 More public charging. Nationwide public charging infrastructure will play a key role in the success of e-mobility. Volkswagen currently estimates that more than half of all charging operations are completed at home. As the market penetration of e-mobility grows, charging operations will be transferred more and more to public spaces. Three out of four inhabitants of Germany live in conurbations and the possibilities of private charging are restricted in urban areas. Only slightly more than half of the population is employed and therefore potentially has the possibility of charging batteries at the workplace. This is why charging facilities in public spaces must be considerably expanded

Sprint program. A sprint program will now be crucial. Over the next five years, about 300,000 public charging points must be provided in Germany. Charging points need to be in prominent positions along the road and available for use in order to build confidence in the new technology. Rapid charging stations may also be a meaningful addition to charging infrastructure in urban areas. They would use the medium-voltage network and relieve the burden on the low-voltage network to which much of the present charging infrastructure is connected (see “IONITY rapid charging network”).

Right to a wallbox. Politicians must lay the foundations for creating more private charging possibilities. This also includes the right to install a wallbox; this means that apartment owners and tenants are entitled to obtain permission for the installation of a charging system for electric cars at their parking space. In Germany, legislation to this effect was recently ratified. Comparable legislation will also be needed in other European countries.

Charging solutions for companies. The development of charging parks may also be lucrative for companies as they often have good conditions in terms of the space available and can relatively easily create an additional benefit for their employees. Against this backdrop, Volkswagen is not only involved in activities at its own locations but also offers other companies complete charging solutions for employee parking lots and company fleets via its subsidiary Elli (Electric Life).

Cooperation with retail outlets. Volkswagen is already cooperating with several retail chains on the expansion of charging infrastructure. This way, customers can charge their cars conveniently while they shop. In Germany, Volkswagen has concluded a strategic partnership with the Schwarz Group, which includes the Lidl und Kaufland chains, among other outlets. At the 60 Lidl and 10 Kaufland stores in Berlin, the retail group has installed a total of 140 public charging points for electric vehicles. The additional charging points of Lidl and Kaufland represent a boost of almost 20 percent in the public charging infrastructure in Berlin. In the UK, Volkswagen is cooperating with the Tesco retail chain.

The flexible fast charging station. Volkswagen Group Components, an independent corporate unit, is developing innovations for the establishment and expansion of charging infrastructure. These include the flexible fast charging station, which can be installed almost anywhere where it is required or no charging infrastructure is available. Thanks to fast charging technology, two electric cars can be charged at the same time at up to 150 kW. If connected to the low-voltage grid, the flexible charging station becomes a fixed charging point without calling for the same investment as a comparable fixed charging station. The battery pack installed provides an energy buffer which means that the station can be disconnected from the power grid to relieve the burden on the power grid especially during peak times. To ensure the sustainable utilization of valuable resources, the station is also designed to allow the use of old battery modules from electric cars for energy storage in the future.

Use in practice. Within the framework of a pilot project, 12 charging stations have already been in operation in Wolfsburg since the beginning of 2020. E.ON will be the first cooperation partner to integrate the flexible fast charging stations into its charging network. For the rapidly growing e-mobility market in China, Volkswagen has established the joint venture International Charging Solutions (ICS) for the joint production of the charging station together with the start-up Shanghai DU-POWER New Energy Technical Co. Ltd. Local production in China and production at the Hanover plant are due to start within the next few months.

The mobile charging robot. The visionary study for underground and other parking garages offers significant cost advantages compared with the full electrification of parking spaces. In this approach, the charging infrastructure is brought to the vehicle and not vice versa. The charging robot consists of a compact self-driving robot and several mobile energy storage units each with an energy capacity of about 25 kWh. The robot is equipped with cameras, laser scanners and ultrasound sensors and can therefore move completely autonomously. Communication with the vehicle takes place via Car to X or using an app. The robot arm connects one of the energy storage units automatically to the electric vehicle. DC charging of the vehicle can then be completed at up to 50 kW. While the mobile energy storage unit remains with the vehicle for the duration of charging, the robot can leave the vehicle to manage the charging of other electric vehicles. When charging has been completed, the energy storage unit is once again disconnected and collected by the robot. This means that operators of parking lots, parking structures and underground parking garages can electrify any parking space quickly and easily.