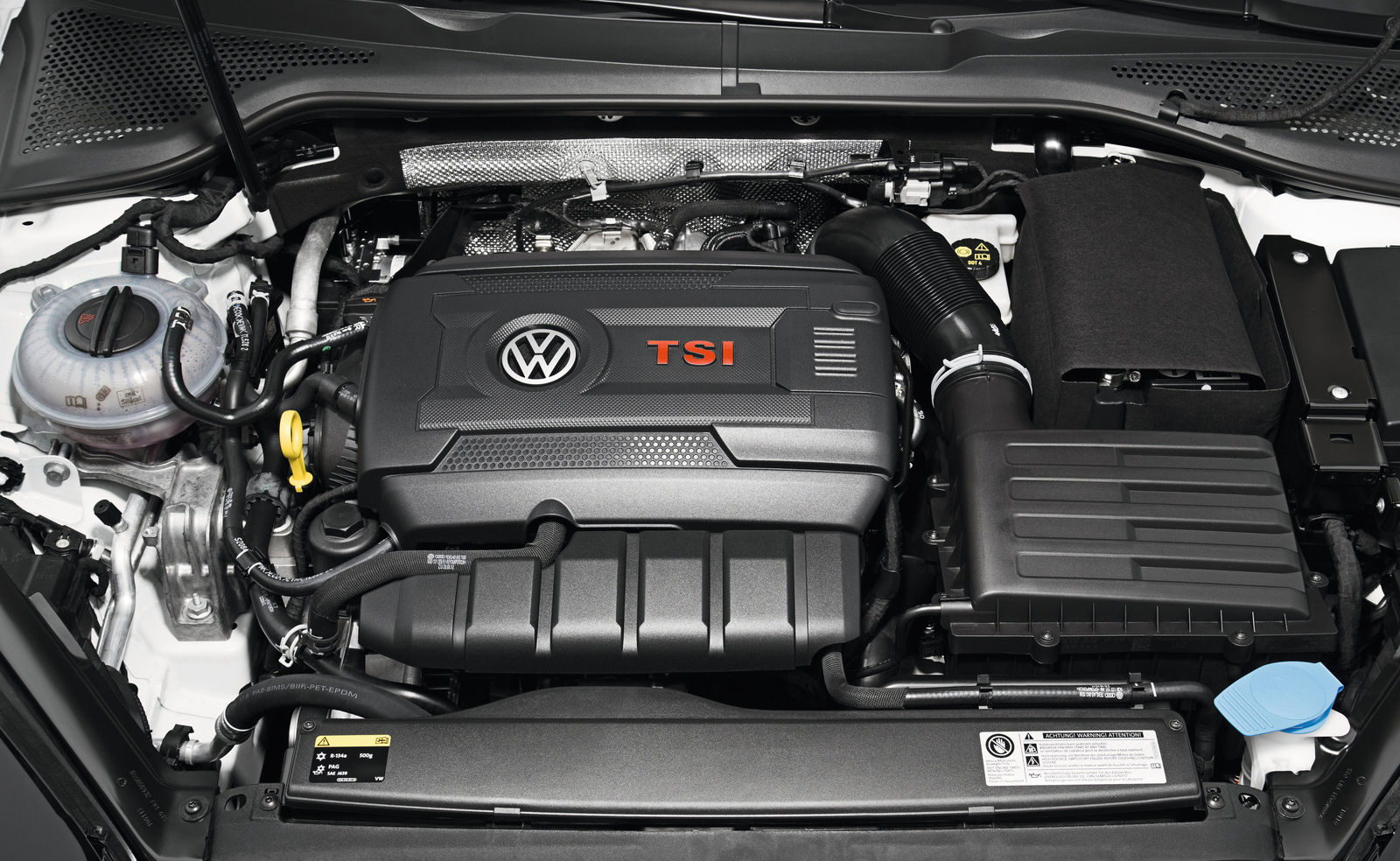 230 PS Golf GTI engine consumes just 6.0 l/100 kmGolf GTI buyers can choose between 220 PS and 230 PS of powerFuel economy of new GTI engine was improved by up to 18 per cent

The Golf GTI VII is powered by an advanced engine of the EA888 series – a two-litre turbocharged direct-injection petrol engine (TSI) with a new cylinder head design. The TSI produces 162 kW / 220 PS (from 4,500 to 6,200 rpm). The sports car icon is optionally available in a performance-enhanced version as the Golf GTI Performance. In this version, the engine produces 169 kW / 230 PS (from 4,700 to 6,200 rpm). Both GTI versions are equipped with a Stop/Start system as standard and, with a 6-speed gearbox, they attain the same low NEDC fuel consumption of 6.0 l/100 km (CO2: 139 g/km). The combined fuel consumption of the new Golf GTI was thereby reduced by 1.3 litres per 100 km, or 18 per cent, compared to the previous model (155 kW / 210 PS). A 6-speed dual-clutch gearbox (DSG) is available as an option for both power levels. The recognised high agility of the Golf GTI has been increased once again in the new model compared to the previous model. In two stages:

Stage 1 – the standard GTI: The 220 PS base version now outputs 10 PS more than the previous model. At the same time, its maximum torque was increased by a considerable 70 Nm to 350 Nm (from 1,500 to 4,400 rpm). Equipped in this way, the Golf GTI makes its appearance with highly superior flexibility values: in fourth gear, the Golf GTI accelerates from 80 to 120 km/h in 5.0 seconds; in fifth gear, it takes 6.0 seconds. Other data that must not be overlooked in a GTI: the new one accelerates to 100 km/h in 6.5 seconds and reaches a top speed of 246 km/h.

Stage 2 – the GTI Performance: Those choosing a Golf GTI with the performance pack ignite the second stage. As mentioned, the car's power is increased by 10 PS here, while its maximum torque is identical. The 230 PS of power enables a top speed of 250 km/h and just 6.4 seconds for the sprint to 100 km/h. Its maximum torque of 350 Nm is available from 1,500 to 4,600 rpm.

The engine of the new Golf GTI is based on the EA888 four-cylinder engine series - now in its third generation. Compared to the previous engine generation, numerous technical details were modified to reduce fuel consumption and emissions while simultaneously increasing power and torque values. As a result, the new model is the first Golf GTI to conform to limits of the Euro-6 emissions standard.

Efficient thermal management. The turbocharged direct petrol injection engine is marked by innovative technical modifications such as exhaust gas cooling integrated in the cylinder head and a dual injection system with both direct injection and multi point injection. The new fully-electronic coolant control system of the TSI enables significantly more efficient thermal management with a shorter warm-up phase; this reduces friction losses, which efficiently improves fuel economy. A new type of rotary vane module was developed for intelligent thermal management control. This makes it possible to fully block coolant entry into the engine or adjust to a minimal volumetric flow in the engine warm-up phase. In the hot operating state, the coolant temperature can be adjusted quickly and fully variably to various temperatures as a function of engine load and external constraints.

Newly developed cylinder head. A unique innovation in this power class is a water-cooled exhaust gas circulation loop to the turbocharger that is fully integrated in the newly developed cylinder head. This type of exhaust cooling makes an important contribution towards reducing fuel consumption at full load in the new Golf GTI. In addition, the 1,984 cc TSI has variable valve timing with dual camshaft adjustment. In addition, the valve lift on the exhaust side can be switched over two stages. This enables optimal control of the charge exchange process for better performance, fuel economy and low emissions.

GTI fulfils Euro-6 emissions standard. As noted, a dual injection system – with direct injection and multi point injection – was also implemented to conform to the Euro-6 emissions standard. Since the system can freely choose the injection type that is optimal at any given time, it possible to reduce particulate emissions over broad map regions and also reduce fuel consumption. Another focus of development was to significantly reduce internal friction. This involved such modifications as changing over the balancer shafts to anti-friction bearings, optimising the crankshaft drive and developing an oil pump that operates only as needed. In parallel, the weight of the GTI engine was reduced as well. A large portion of the savings came from the new thin-wall crankcase that is only 3 mm thick, a weight-optimised crankshaft, exhaust gas cooling by integrating the exhaust manifold in the cylinder head, a plastic oil pan and the use of aluminium screws.