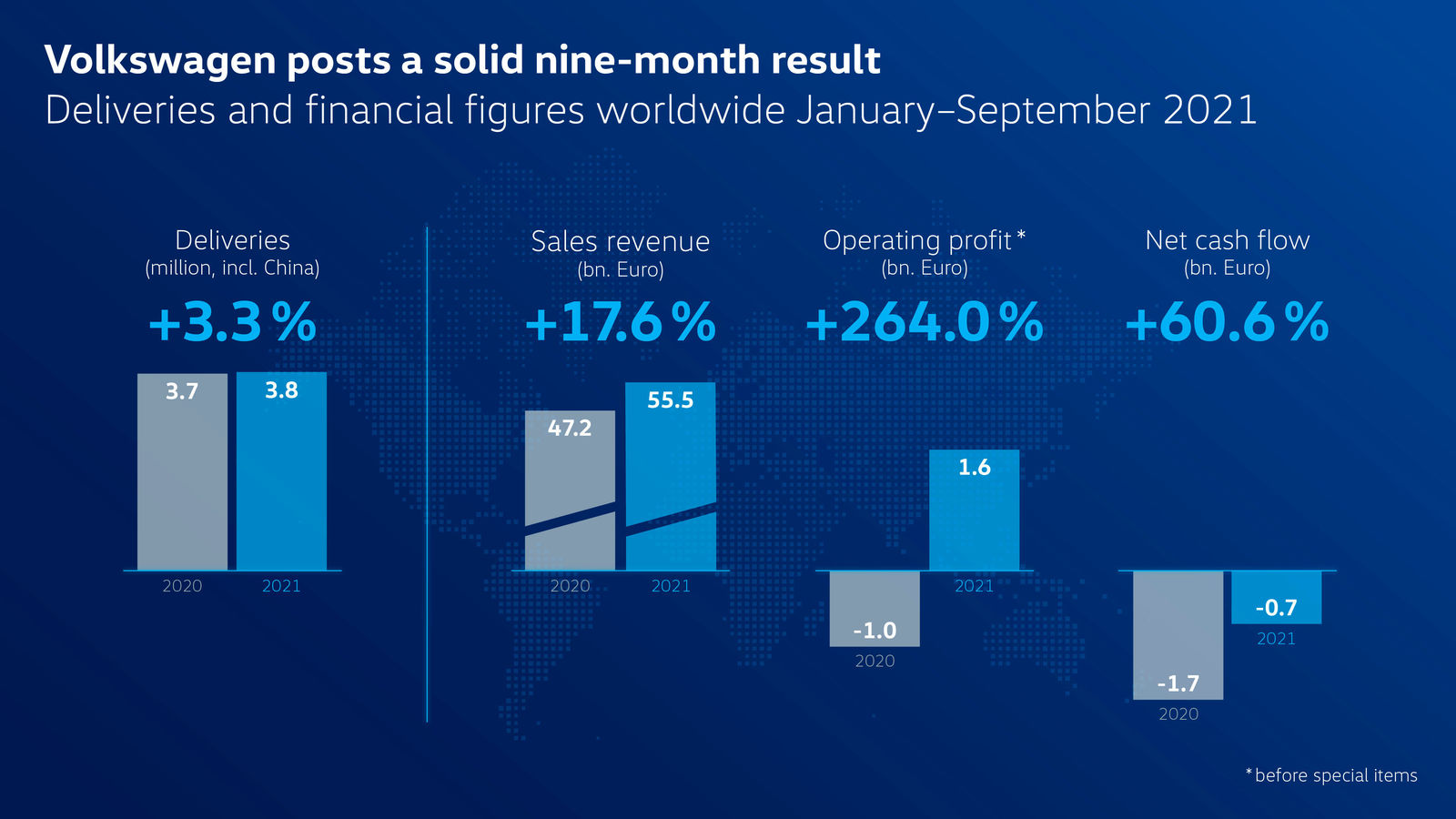 Despite the ongoing structural shortage of semiconductors throughout the industry, Volkswagen delivered around 3.8 million vehicles to customers worldwide in the first nine months (+3.3% compared with the prior-year period). During the reporting period, sales revenue grew to EUR 55.5 billion (+18%) and the operating profit increased by EUR 2.6 billion year on year to EUR 1.6 billion (operating return on sales: +2.9%). The net operating cash flow before special items stood at EUR -0.7 billion after nine months, due especially to the increased inventories of unfinished vehicles, battery cells, and raw materials, auxiliaries and consumables that resulted from supply issues. As expected, the third quarter was impacted by the difficult semiconductor situation. During this period, Volkswagen delivered around 1.1 million vehicles (-26%). The operating profit in the third quarter was EUR -184 million. The company already anticipates a return to a significantly positive performance in the current fourth quarter.

Volkswagen CFO Alexander Seitz: “Despite the massive challenges caused by the impact of the COVID-19 pandemic and the ongoing shortage of semiconductors, Volkswagen’s performance in the first nine months of 2021 improved on the prior-year period. Our systematic reduction of fixed costs and intelligent, result-oriented sales management contributed to this result. As expected, following a good first half of the year, it was no longer possible to mitigate the impact of the semiconductor shortage in the third quarter that resulted in substantial production losses and low inventory levels. The cash flow is also influenced by work in progress on components and vehicles for other Group brands. We are anticipating a return to a significantly positive fourth-quarter performance compared with the third quarter.”

The demand for Volkswagen vehicles remains strong and orders reached a historically high level in the third quarter. Volkswagen Board Member for Sales Klaus Zellmer: “We currently have orders for almost half a million cars from Europe alone.” After nine months, total deliveries by Volkswagen had increased year on year in all regions except China. The company’s electric offensive continues to gain momentum. In the first nine months, a new record for global deliveries of electric vehicles was set with 167,800 BEVs (+169%) and 86,900 PHEVs (+98%). Volkswagen is the market leader for all-electric vehicles in Europe and is meeting its targets in the USA.


In China, too, Volkswagen’s electric offensive is on track, with sales of the ID. Family increasing continuously. Just after the launch, more than 6,000 ID. models were already delivered to customers in the second quarter. This figure rose to around 23,000 in the third quarter. The upward trend accelerated further in October to the expected delivery of some 14,000 units. As well as the ID.4, the seven-seater ID.6 has proved popular, with more than 7,000 units already sold since the SUV was launched in the summer. Last week, the ID.3 was the third ID. model to be introduced in China.


As part of its ACCELERATE strategy, the company will be bringing at least one additional all-electric car to market each year. In just a few days, the ID.5 and ID.5 GTX will be celebrating their world premiere.

Volkswagen expects the semiconductor capacity shortages to persist beyond the end of 2021. Seitz: “We are continuing to strengthen our resilience by further optimizing our productivity and cost structures. In the short term, we are already anticipating improvements in all key financial indicators in the current fourth quarter compared with the third quarter just ended. For full year 2021, we are thus aiming to raise sales revenue above the prior-year level and, due to the weak third-quarter performance resulting from the semiconductor situation, are now targeting an operating return on sales of up to 3 percent. We remain committed to achieving our margin target of 6 percent by 2023.”


In order to become more resilient to market fluctuations, Volkswagen is seeking to trim its fixed costs by 5 percent before 2023, increase factory productivity by 5 percent per year, optimize material costs by 7 percent and bring all regions into the black in the long term. Despite the semiconductor shortage, Volkswagen expects to reach break-even in the North America and South America regions this year.