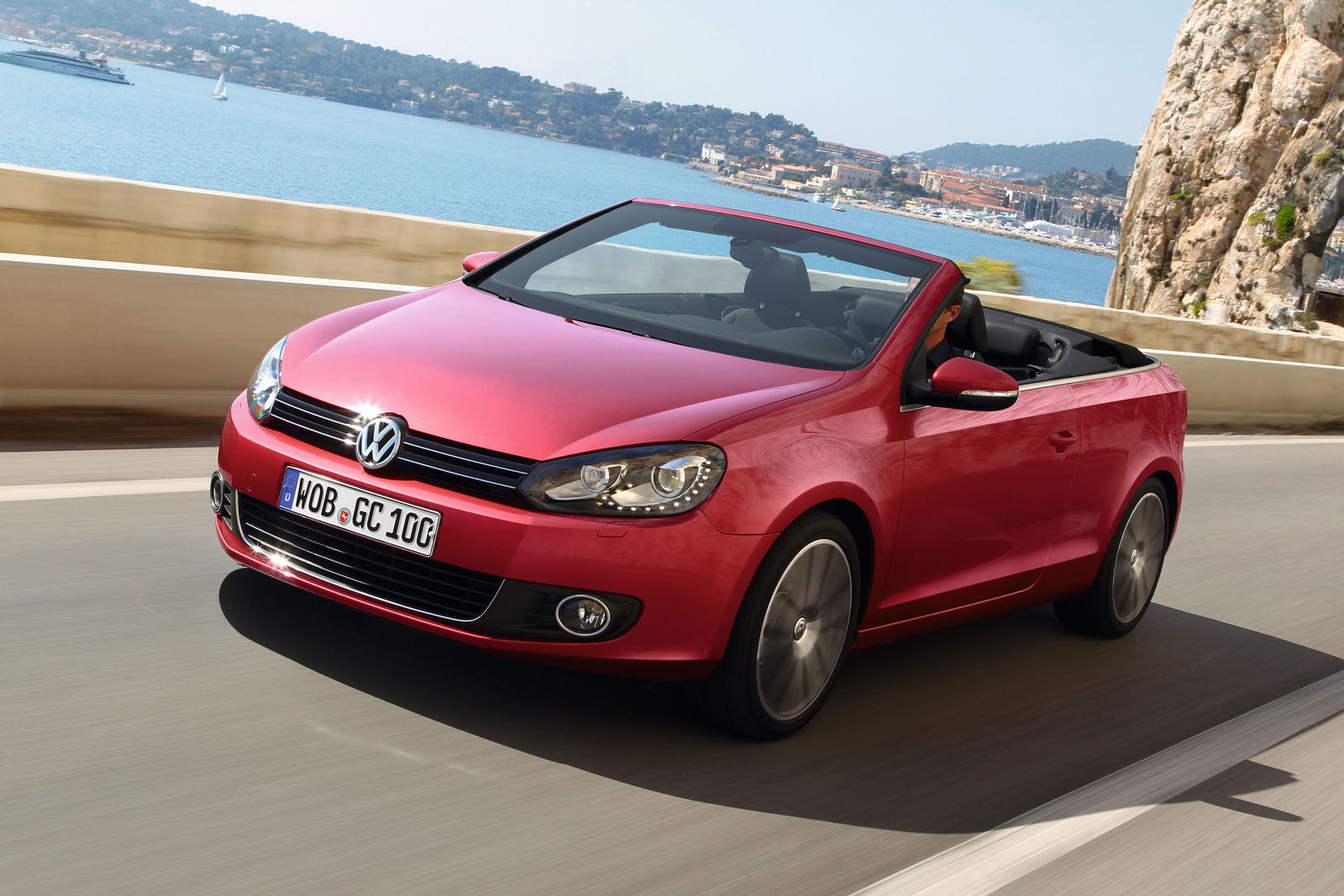 Contains 4 sections: The Golf as a cabriolet, Democratisation of the cabriolet, Sustainable performance is attainable and Feature: The cabriolet that was never built

Golf as a cabriolet

More than just summer fun: Golf Cabriolet is a safe all-round vehicle for 365 days a year

Like the more than 680,000 units of previous Golf cabriolets built, the new Golf Cabriolet also has a classic soft top – that is, a fabric top. Why fabric and not steel as on the Eos? A glance at the new model is telling: at a length of 4,246 mm, the Golf Cabriolet has a significantly more compact construction than the 4,423 mm long Eos. The two vehicles take fully independent approaches to styling, positioning and cabriolet design.

The top of the Golf Cabriolet

Although Volkswagen is using a fabric top on the Golf, the four-seater is one of the quietest of cabriolets. Its soothing quiet ride is attributable to the sophisticated design of the fabric roof as well as new window and door seals. Wind noises in the high frequency range above 5,000 Hz are perceived as especially annoying, since they make it difficult hold a conversation while driving (articulation index). Volkswagen examined this articulation index in-depth and evaluated experiences in other vehicles. The results: the Golf Cabriolet actually sets new standards for acoustics in cabriolets.

The soft top itself consists of a linkage, a roofliner, insulating filler layer throughout and exterior cover. Perfection in everyday practicality: the development team designed the joints of the longitudinal seams of the exterior cover fabrics (centre panel and two side panels) so that they serve as an additional drip rail. Perfection in aerodynamics: mounted between the longitudinal frames of the top linkage are a total of 4 roof cross bows and the so-called front roof bow (the first large transverse element behind the windscreen frame). In turn, the soft top is joined to the roof bows by screw-fastened fabric retention strips. Consequently, even at higher speeds, the fabric roof does not fill with air. And that has a positive effect on aerodynamics.

When the roof is stowed, the upper surface of the front roof bow covers the top surface of the storage box. This eliminates the need for a separate cover. The results: the standard fully-automatic electro-hydraulic top opens (9.0 seconds) and and closes (11.0 seconds) faster. In addition, it does not need to descend as deeply into the larger bootspace (250 litres with roof up or down).

The top is operated from a central switch on the centre console. Opening and closing are even possible while driving – at speeds up to 30 km/h. Two hydraulic pumps activated by a central switch generate the necessary pressure. Even in this area, special care was taken to ensure that the least possible noise is generated; for example, the hydraulic unit is enclosed by insulation. Unlatching and latching of the Golf Cabriolet's soft top is handled by an electromechanical locking system. It operates fully automatically. This means that no additional manual unlatching or latching is necessary. The system senses, via 2 microswitches, whether the roof is completely opened or closed, and it informs the driver of the OK status by an acoustic signal and a visual message (in the multifunction display).

To ensure a good view behind the car, the top's heated rear glass window was designed to be especially large for a cabriolet; it is joined to the soft top by what is known as high-frequency welding.

Safety in the Golf Cabriolet

The rollover protection element implemented in the Golf races upward behind the rear headrests within 0.25 seconds of the vehicle exceeding a predefined transverse acceleration or tilt angle. The system's two rollover modules consist of one fixed aluminium profile and one moveable aluminium profile within it that is pretensioned with a spring. The inner profile is held in its rest position by a magnetic switch. When triggered by the airbag controller in reaction to an impending rollover, the solenoid opens a holding detent and releases the inner profile. While it shoots upward, a support detent overruns a toothed track mounted to the inner profile and prevents the inner profile from dropping downward.

The highlight of the system redesigned for the Golf: the 2 deployable modules were designed to be significantly more compact. For the first time on a Volkswagen cabriolet with deployable rollover protection, it was possible to implement a cargo pass-through with a width of 526 mm and a height of 381 mm, including a folding rear seatback. Previously, there was just a ski pass-through in this area.

Body reinforcements: The Golf Cabriolet offers maximum all-round safety thanks to its rollover protection system, a reinforced windscreen frame and numerous other structural modifications (underbody, side panels, crossmembers, doors). Due to its numerous reinforcements, the 4.25 metre long, 1.78 metre wide and (top up) 1.42 metre tall Golf Cabriolet also exhibits extreme torsional rigidity. Some of these reinforcements are visible when the cabriolet is viewed from below, such as when the Cabrio and a "normal" Golf stand side by side on a raised platform. In a visual comparison, the observer can see significant differences in the underbodies. In front, the cabriolet has an engine enclosure made of aluminium; together with its mounting brackets, which increases rigidity. In addition, the engine mount, acting as a vibration damper, adds refinement at the front end. On each side of the car, 2 lateral reinforcements in the sill area and 2 diagonal braces, front and rear, as well as the reinforced rear subframe joint lead to further gains in rigidity and a significant reduction in resonant body vibrations.

What is referred to as the coefficient of static torsional rigidity reaches a value of over 13,500 Newton metres per degree; the first resonant torsional frequency lies above 17.5 Hz – first-class for a cabriolet. And this rigidity, which is also a crucial factor for optimal driving stability and driving comfort, is quite noticeable. Meanwhile the galvanised body protects the car from rusting.

Cabriolet-specific airbags: The protective systems on the Golf Cabriolet are completed by reinforcements in the doors and standard front and side head-thorax airbags. The latter are specially designed for a cabriolet, since of course it is impossible to mount side head airbags in the roof area. The head-thorax airbags integrated in the lateral sections of the seatbacks therefore deploy next to the driver and front passenger over the entire interior height of the Golf Cabriolet. A standard knee airbag has also been incorporated on the driver's side. In conjunction with the safety belt, this airbag absorbs energy from the pelvic area and the legs, which leads to reduced occupant loading. Taking it further: thanks to the knee airbag, the driver is integrated in the vehicle's deceleration mode sooner via the thighs and pelvis. This initiates upper body rotation precisely, so that the driver's airbag can make contact with and support the upper body at an optimised angle. The knee airbag's mode of operation illustrates the true complexity of the networking of safety systems.

Styling of the Golf Cabriolet

Front end: Viewed from the front, this cabriolet is of course a typical Golf. Nonetheless, the cabriolet has an even sportier image from this perspective, because of the swept-back windscreen. An especially dynamic image results when the Cabrio is ordered with the optional bi-xenon headlights. In this case, the daytime running light formed by 15 LEDs is automatically integrated in the dual headlight housing.

Rear: The smoked LED rear lights were adapted from the three- and five-door Golf. Naturally, designers and engineers redesigned the rear section itself. The cabriolet's bootlid extends low into the bumper, and it swings far upward, making it easy to stow suitcases or shopping items. An elegant chrome trim strip forms a visual contrast between the lower edge of the soft top and the bootlid; this continuous chrome strip extends up to the A-pillars.

Side profile: In side profile, 3 styling characteristics of the cabriolet are especially appealing to the eye: the more swept-back windscreen, the visually very short boot and the soft top integrated in these style lines. When the soft top is down, the Golf Cabriolet has an elegant, extended look. With the top up, the compact and crisp styling lines around the imaginary C-pillars and the boot reflect the unmistakable character of the previous model and transfer it to contemporary times – spanning over an entire decade.

Interior of the Golf Cabriolet

Very clearly – the cabriolet version of the Golf follows the high styling and material quality standards of the classic hardtop Golf 1:1 in its interior. This results in a level of sophistication that is otherwise only offered in significantly more expensive cabriolets. Like the Eos before it, the Golf sets itself apart from many other cabriolet cars in the compact class in one key aspect of its interior: the windscreen frame is refreshingly short, optimising the Cabrio feeling. In addition, the Golf Cabriolet offers the largest interior length in its class. Guests in the rear will especially notice the 833 mm of effective legroom.

Similar to the design implemented in the Eos, the top activation switch is integrated in the centre console between the driver and passenger seats. Redesigned features include the rear bench seat and seat upholstery materials. The Golf Cabriolet also has a practical Easy Entry function of the front seats as standard; this makes it easier for rear passengers to enter and exit the car.

There are practical bag hooks in the side panels of the 250 litre boot; located right next to the hooks are the remote latch release mechanisms for folding the 50:50 split rear seatback. When the seatback is folded, this adds additional stowing capacity thanks to the very large pass-through opening.