SUVs are booming. Their drivers love the sense of space and the sporting driving pleasure. But is it still in keeping with the times in light of the impending climate disaster? Frank Bekemeier, Chief Technology Officer for Electric Mobility at Volkswagen, and Jens Obernolte, Head of Energy and Weight Management, explain how the ID.4 GTX reconciles environmental awareness and driving pleasure. 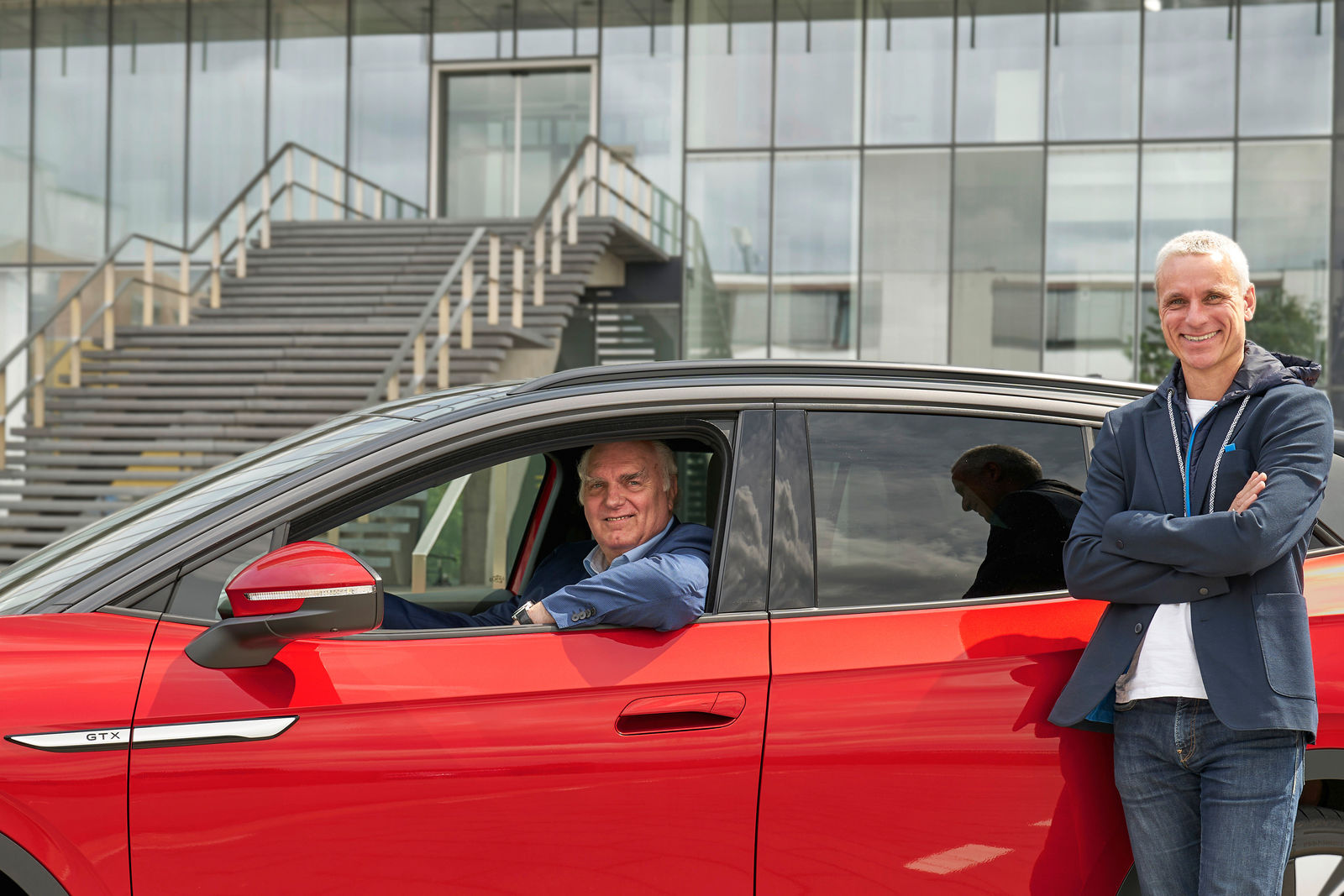 Mr Obernolte, a climate-friendly SUV – isn’t that a contradiction in terms?

Obernolte: No, quite the opposite! At least not when you do it like we do: the ID.4 GTX is an all-electric SUV that doesn’t emit any exhaust fumes but offers plenty of performance. So you can drive around in a sporty, highly-efficient four-wheel drive with a clear conscience. Our customers can also have the driving experience and comfort of an SUV that many people aren’t willing to forego. And why should they?

What makes driving pleasure so special in the ID.4 GTX?

Obernolte: The great fascination of the ID.4 GTX is the silent power of the engine. When you put your foot down on the right-hand pedal, you push up to 220 kW – from a standing start, with great force and immediately, but almost without a sound. The car goes from 0 to 100 in 6.2 seconds, which is faster than the Golf GTI. And because the battery is located like a weight on the floor of the car, the ID.4 GTX has a much lower centre of gravity than conventional SUVs – giving it more contact with the road surface


Bekemeier: … which always springs into action when needed – for example, when the driver wants to experience sporty driving pleasure. However, the electric engine at the rear can handle the drive on its own in most everyday situations. We opted for a permanent magnet synchronous motor here because it is very efficient. However, there is an asynchronous motor on the front axle. This has other advantages – it is very compact and lightweight, and produces only minimal drag losses when it also runs without power.

Does this mean the dual engine four-wheel drive is particularly efficient in the ID.4 GTX?


Obernolte: Yes, it is. It works without a clutch and drive shaft, so without the large components that cause friction loss in mechanical four-wheel drive. In the ID.4 GTX we only need to switch electricity – but as intelligently and efficiently as possible. This includes making the right recuperation mode – meaning the energy recovery mode – that is most efficient for the driving situation available during deceleration phases. This further reduces consumption and increases the range. 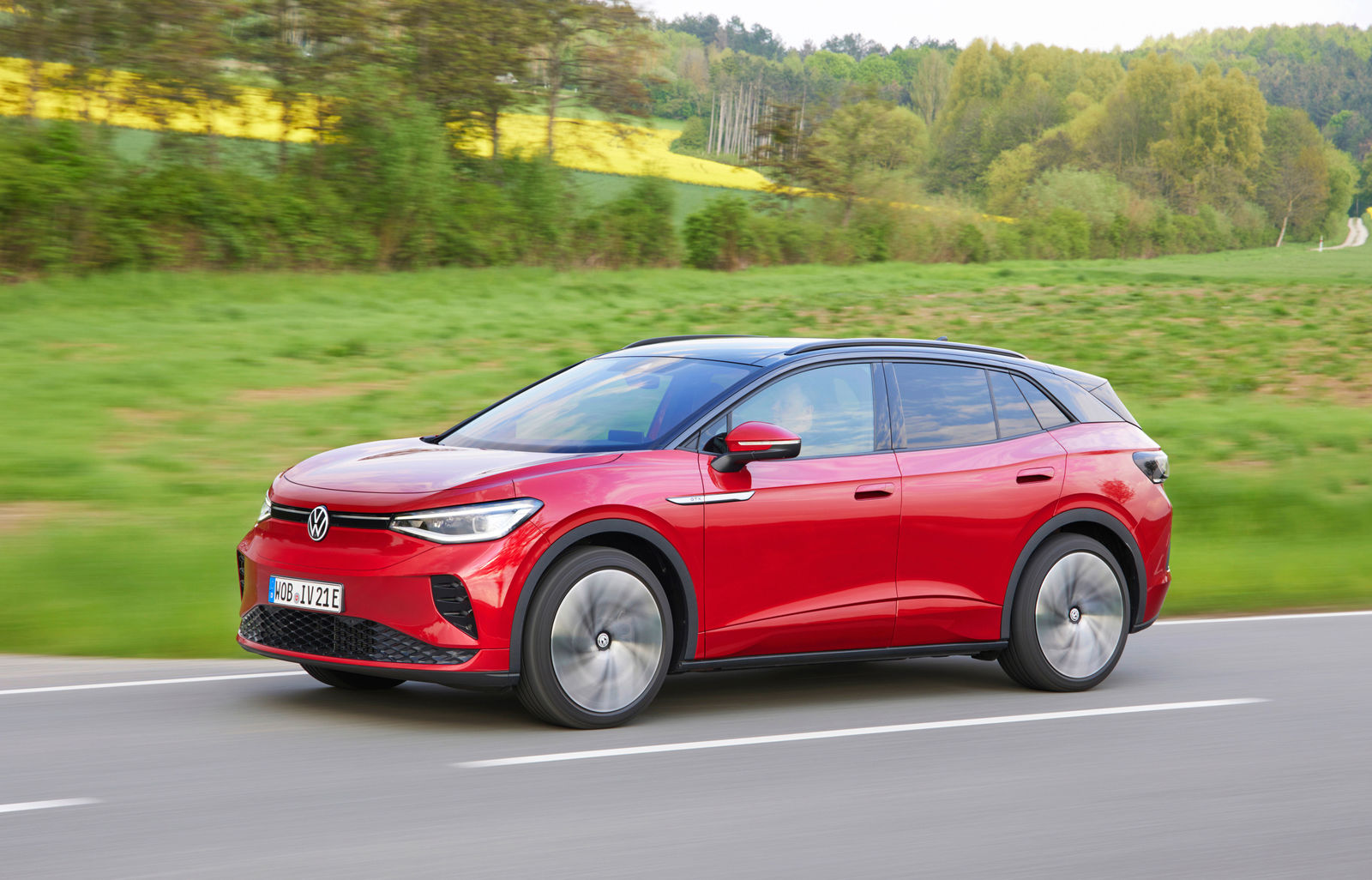 The ID.4 GTX: climate-friendy and sporty at the same time.

Why is Volkswagen relying so heavily on battery-electric drive?

Obernolte: Because it is the most efficient use of input energy. The battery and electric motors convert between 70 and 80 percent of input energy to drive. A fuel cell car or combustion engine powered with sustainably generated fuels, known as e-fuels, is not able to do that. The efficiency rate of those is somewhere between 25 and 30 percent, or lower.

What does that mean exactly? How does the ID.4 GTX compare with a corresponding combustion engine model?


Obernolte: In an NEDC cycle, the ID.4 GTX uses 16.3 kWh over 100 kilometres. The corresponding combustion engine with petrol uses around 7 litres per 100 kilometres – which is the equivalent of around 60 kWh of energy, because its efficiency rate is more than three times lower than the electric car. And it’s not much better with a diesel engine, we’re talking around 50 kWh per 100 kilometres there.

Another major strength of electric drive is the minimal space requirement.

Bekemeier: Exactly. The combustion engine and its auxiliary components have been done away with, which allowed us to design a short front end and a correspondingly large interior. The ID.4 GTX is a compact, manoeuvrable SUV from the outside, but has plenty of space for family and everything you need to take with you inside.

But the production of electric cars has unavoidable adverse effects on the climate, notably when it comes to the batteries.

Bekemeier: Every single one of our electric cars that rolls off the production line in Zwickau does generate a certain amount of CO2 emissions. This includes both production in the plant and the whole supply chain, meaning the production of battery cells at the supplier, which uses renewable energy. But when we hand the car over to our customers they are net-zero climate-neutral because we offset unavoidable emissions with climate protection projects. And when the battery wears out one day, we can continue to use it as stationary storage until we recycle it at the very end of its lifespan. Our aim is to recycle more than 90 percent of valuable raw materials such as lithium, nickel, manganese and cobalt, as well as aluminium, copper and plastic.

Between production and recycling is the useful life. And an electric car has zero emissions globally – when it is consistently charged with renewable energy.

That’s right. When we compare the ID.4 with a conventional car, it definitely has a clear positive carbon footprint. If it is run with the average EU electricity mix, its footprint is smaller than that of a comparable combustion engine after considerably less than 100,000 kilometres on the clock. And when it is charged with renewable energy, this tipping point is reached a third earlier. Which is why our brand is promoting the expansion of renewable energies and making large-scale investments in wind and solar parks in Europe. We want to ensure that all the power our electric fleet needs on the road comes from green energy. 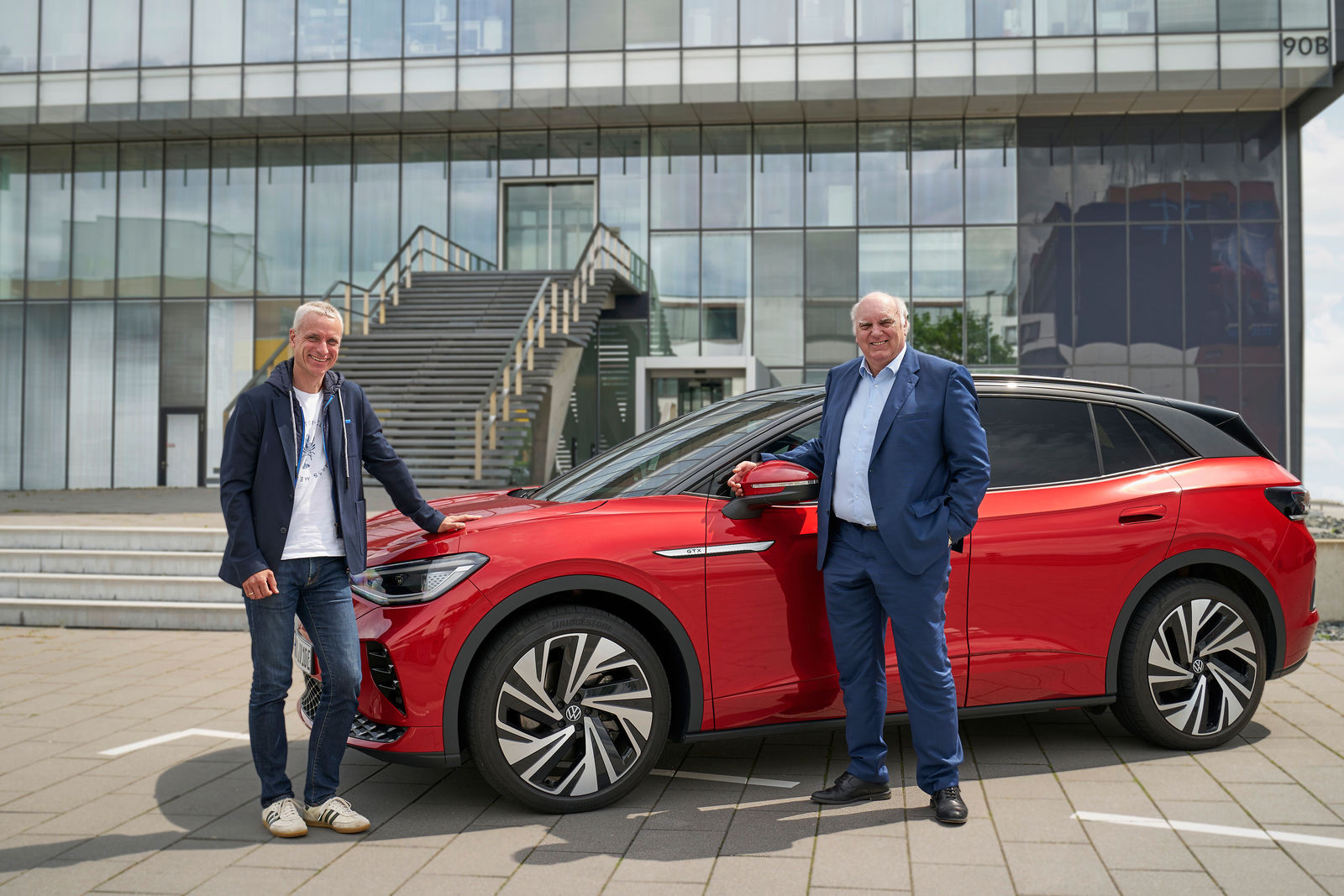 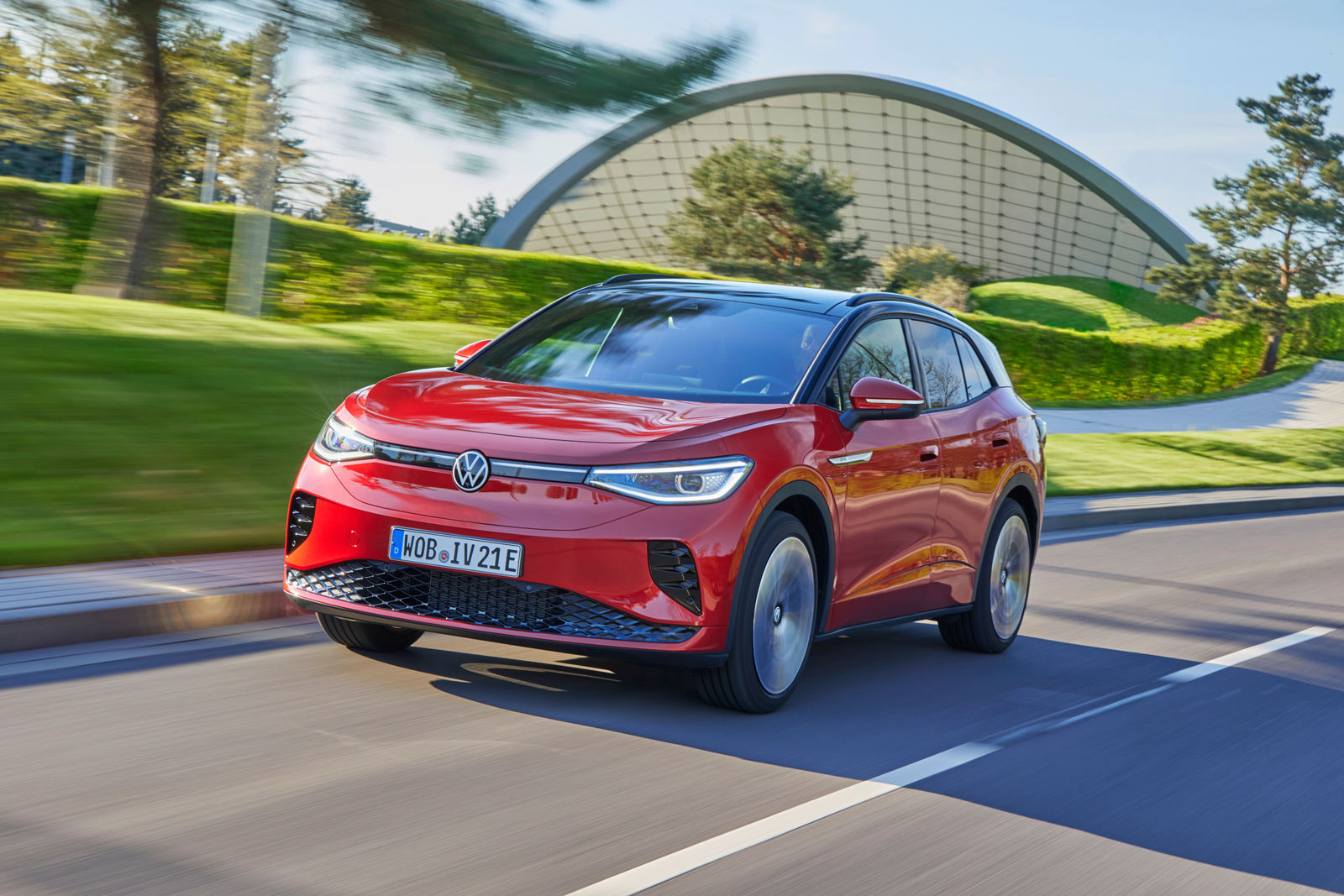 The new ID.4 GTX from Volkswagen 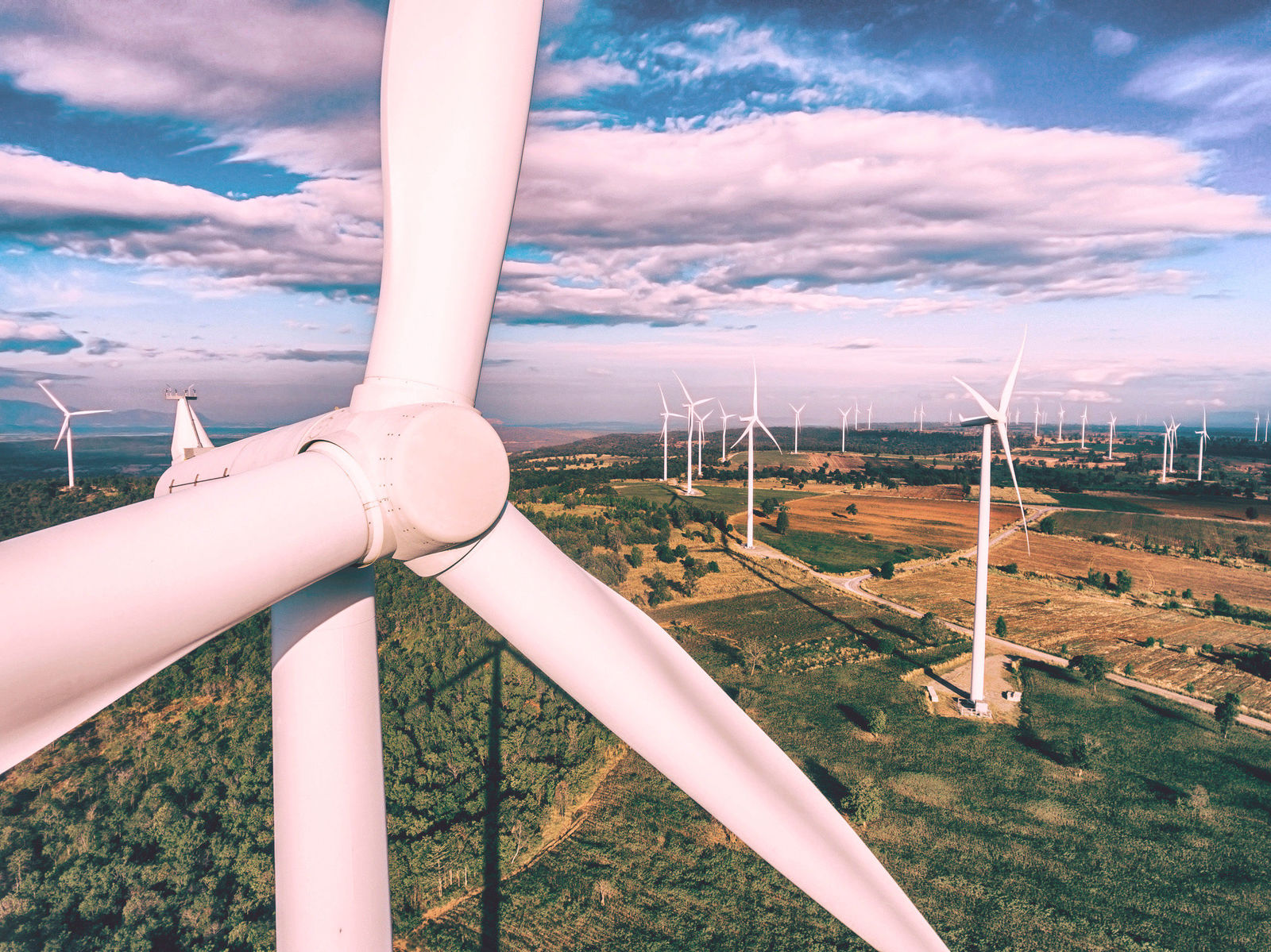 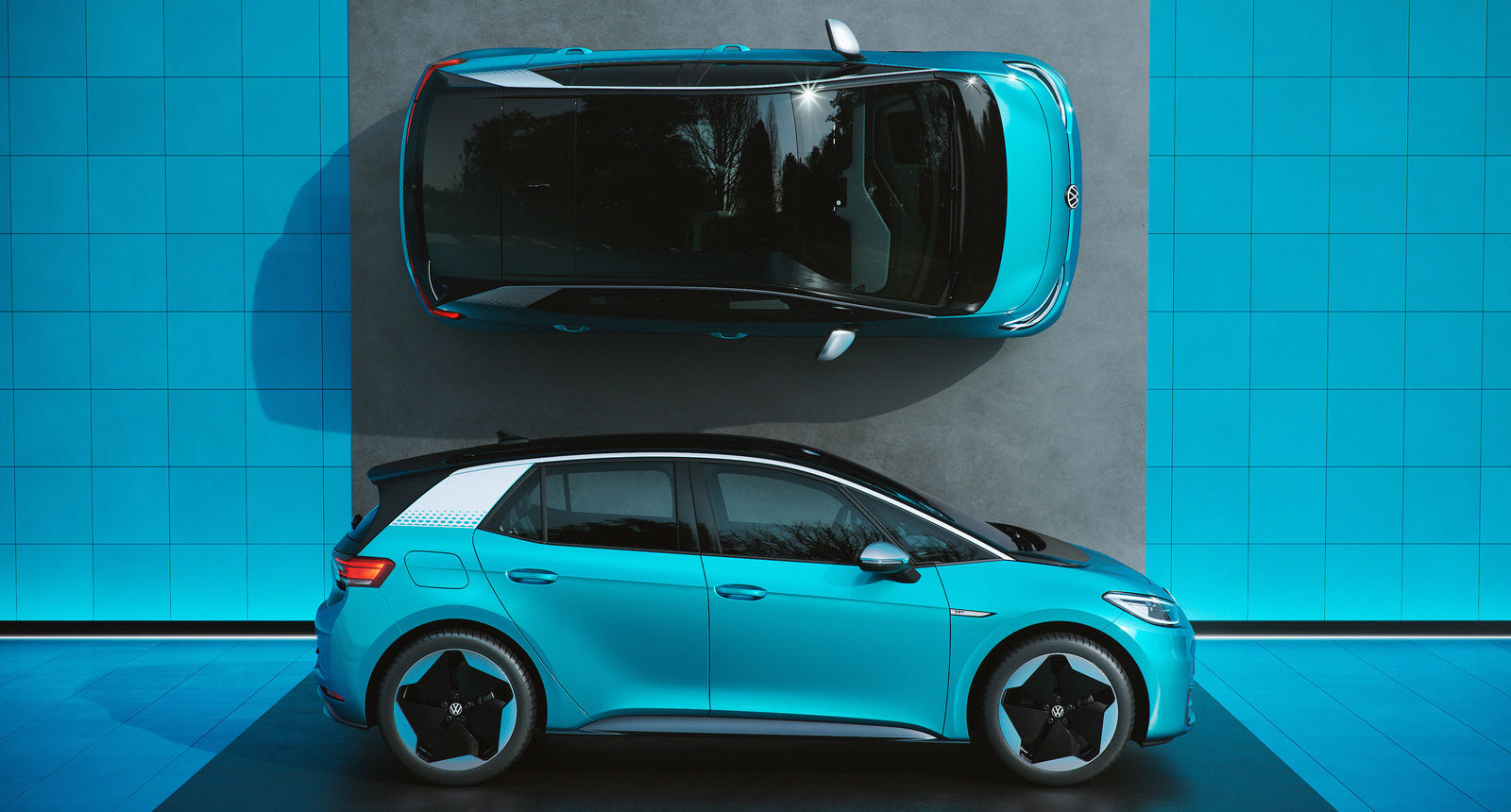 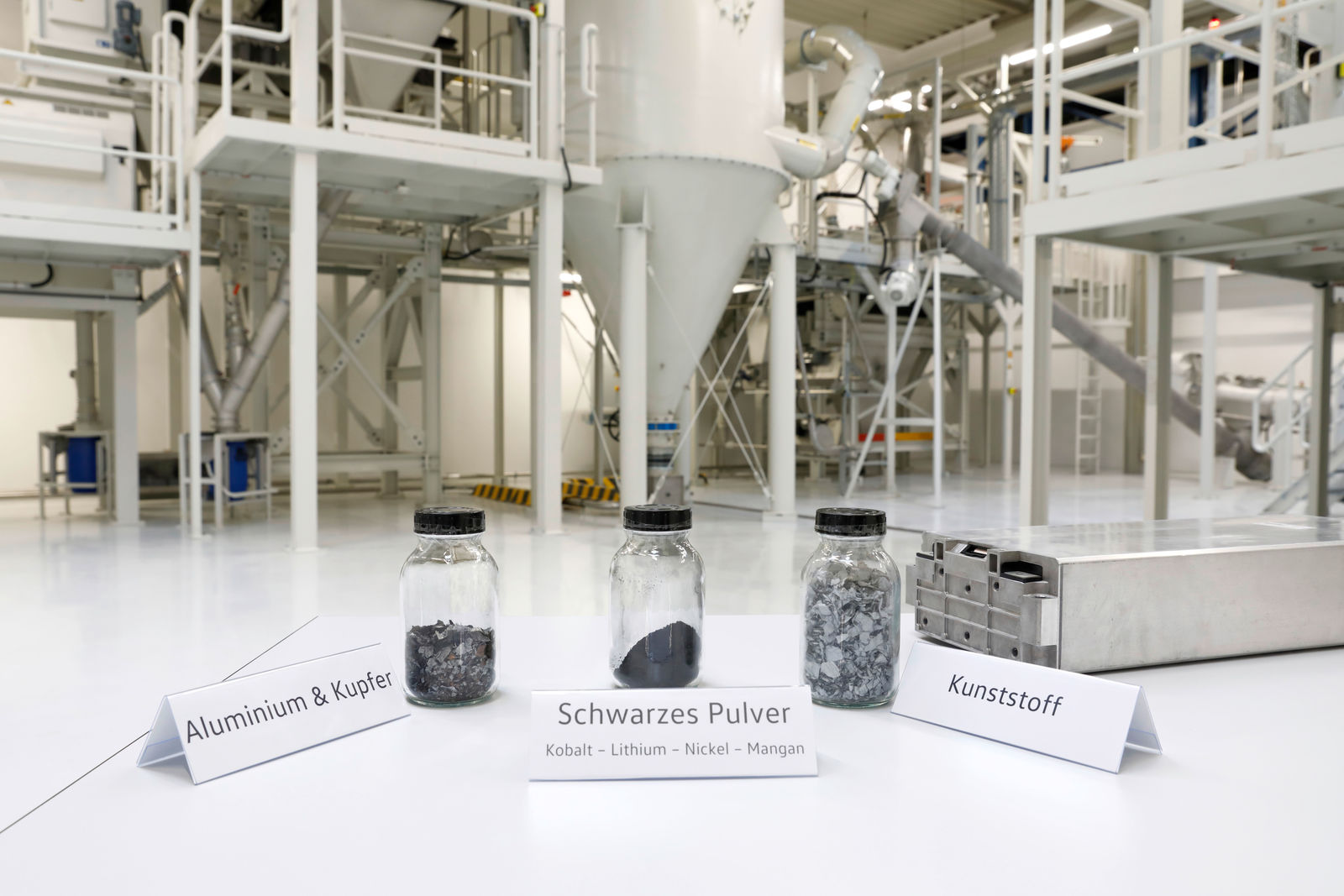 Battery recycling:
After the end of a vehicle’s service life