Powering into the future with a single gear

February 29, 2020 is a leap year day. We show how Volkswagen Group revolutionized the automatic transmission with the DSG dual-clutch transmission and and how to change gear on the e-drive. 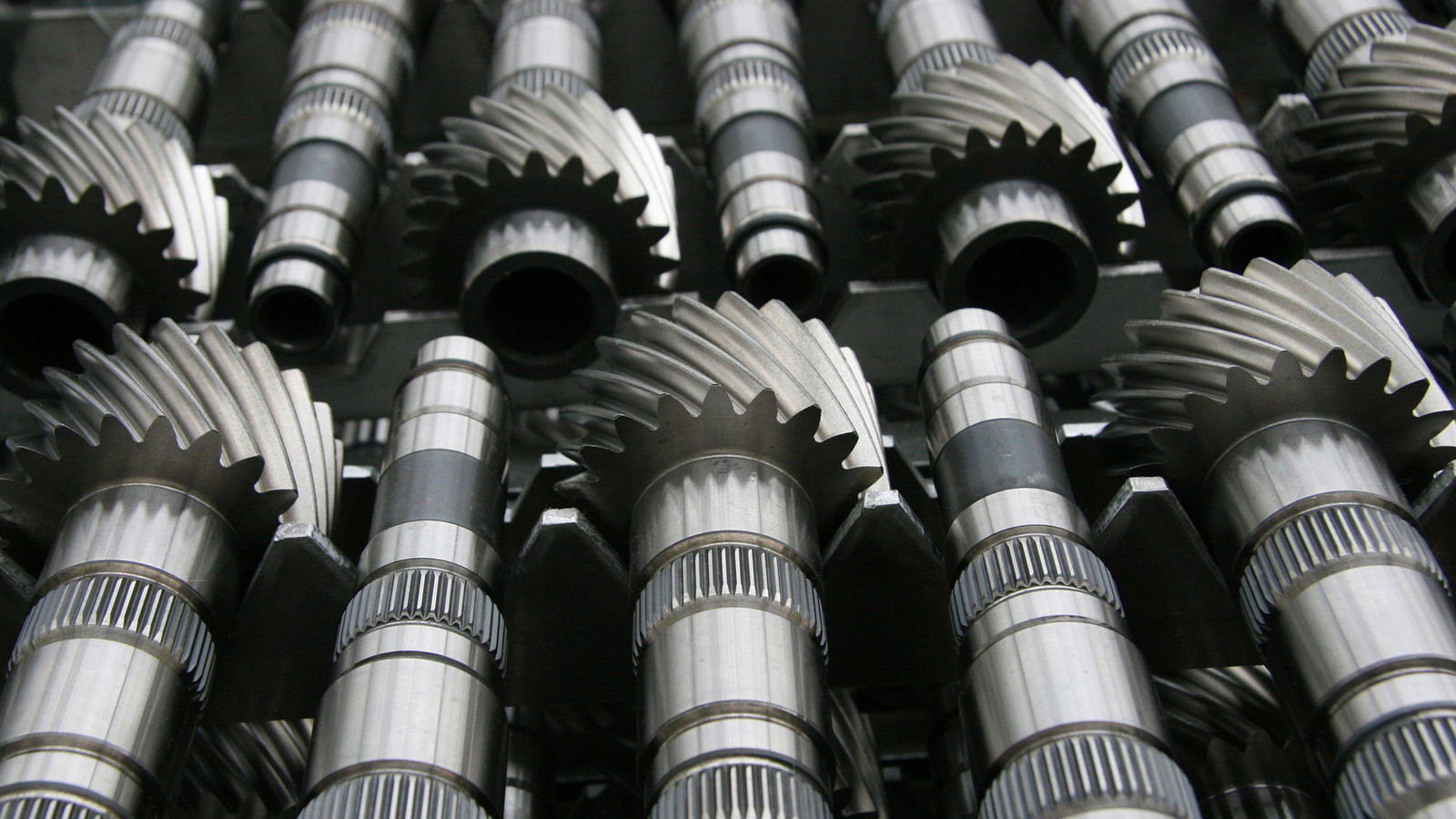 Drive shafts from the production halls of Volkswagen Group Components.

Since combustion engines have been used for vehicle propulsion, they have required transmissions. Why? Without them, driving would simply not be possible. As part of the drive train, the transmission sits directly on the engine and converts the engine speed and the torque. This drives the wheels.

By changing gears, the driver ensures that the number of revolutions (RPM) remains low, the engine is protected, and fuel consumption is reduced. When changing gears, the interaction of different gears inside the transmission changes. The different gear ratios ensure that the power from the engine is transferred to the drive shaft and via the differential to the wheels in the best possible way.

The power from the engine is thus converted by the transmission in such a way that it is adapted to the respective driving situation. In a vehicle with a manual gearbox, the clutch pedal is used to release the connection between the engine and the gearbox so that the driver can change gears. In an automatic transmission, this happens fully automatically without the need to operate a clutch pedal. Either way, the transmission enables efficient driving. 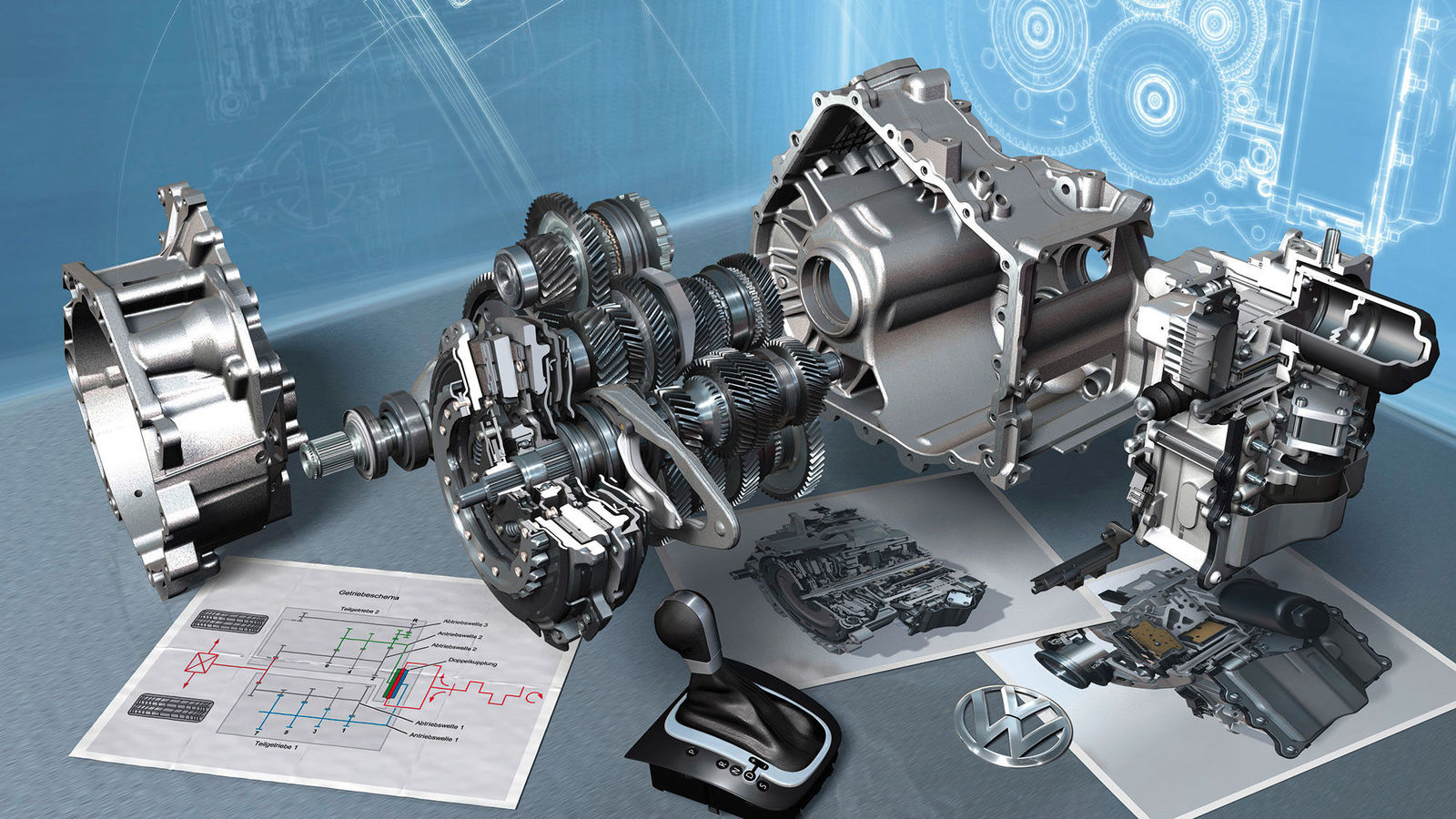 The interior of the seven-gear DSG gearbox DQ 200.

Kassel component plant is the most important production site for gearboxes

The Volkswagen Group Components plant in Kassel-Baunatal has always been the Group’s largest production site for gearboxes and one of the most important component suppliers to the vehicle manufacturing plants. Since the plant was founded in 1958, more than 130 million transmissions have left the production halls. The first transmissions produced in Kassel were the manual Beetle type 113 transmissions. Since May 1960, the transmission manufacturing department in Hall 1 has been producing individual parts such as transmission housings, the actual gears, drive shafts, clutch and synchronizer bodies, assembling them into complete transmissions and shipping them around the world for final assembly. 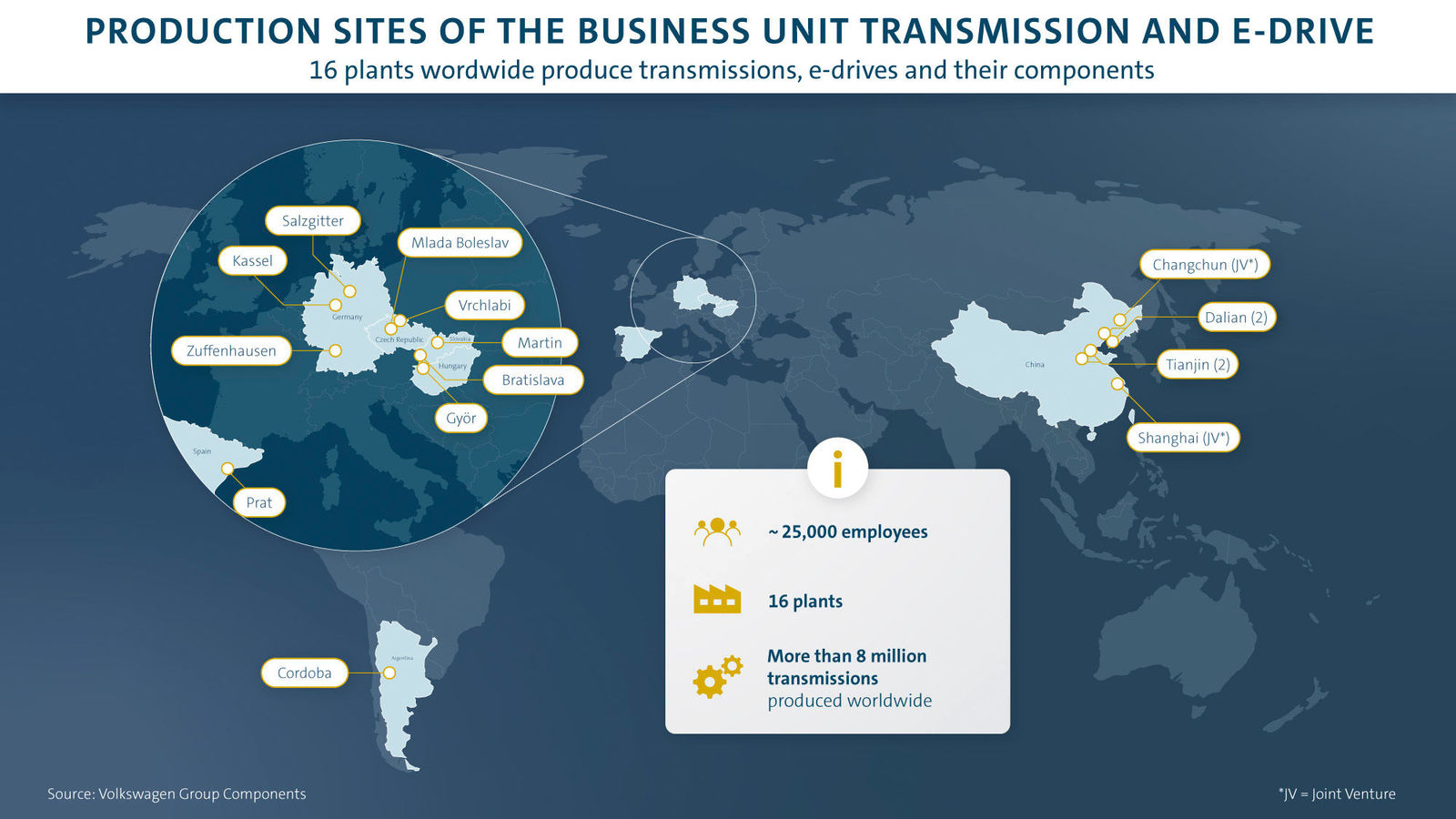 Since 1960, the so-called 113 transmission had a four-speed full-synchronization and a one-piece magnesium housing. The then manual transmission 113 for the Beetle was built in Kassel a total of 13.5 million times between 1960 and 1983. Even more frequently, the MQ250, available as a five- and six-speed transmission, rolled off the assembly line at the components plant in Kassel-Baunatal. Almost 14 million of these units, which were installed in models of the Volkswagen, SEAT, Audi, Volkswagen Commercial Vehicles and ŠKODA brands, were built here – one of Volkswagen’s most successful manual gearboxes. The letters in the name stand for manual, transverse installation and the input torque of 250 Newton meters.

The manual five- and six-speed manual transmission MQ200 is built at Volkswagen Group locations around the globe. Worldwide, 32 million units of this transmission type, which is installed in models of the Volkswagen, SEAT, ŠKODA and Audi brands, have already been produced. In 2018, the Czech components plant in Mlada Boleslav – the current main plant of the MQ200 – produced the seven millionth gearbox of this type alone, since transmission production started there in 2000.

With the MQ281, Volkswagen Group Components in El Prat (Spain) is producing a new, state-of-the-art manual transmission that has been used in Audi, SEAT, ŠKODA and Volkswagen models since 2019. More efficient than ever before, the MQ281 enables CO2 savings of up to five grams per kilometer, depending on the engine/transmission combination. 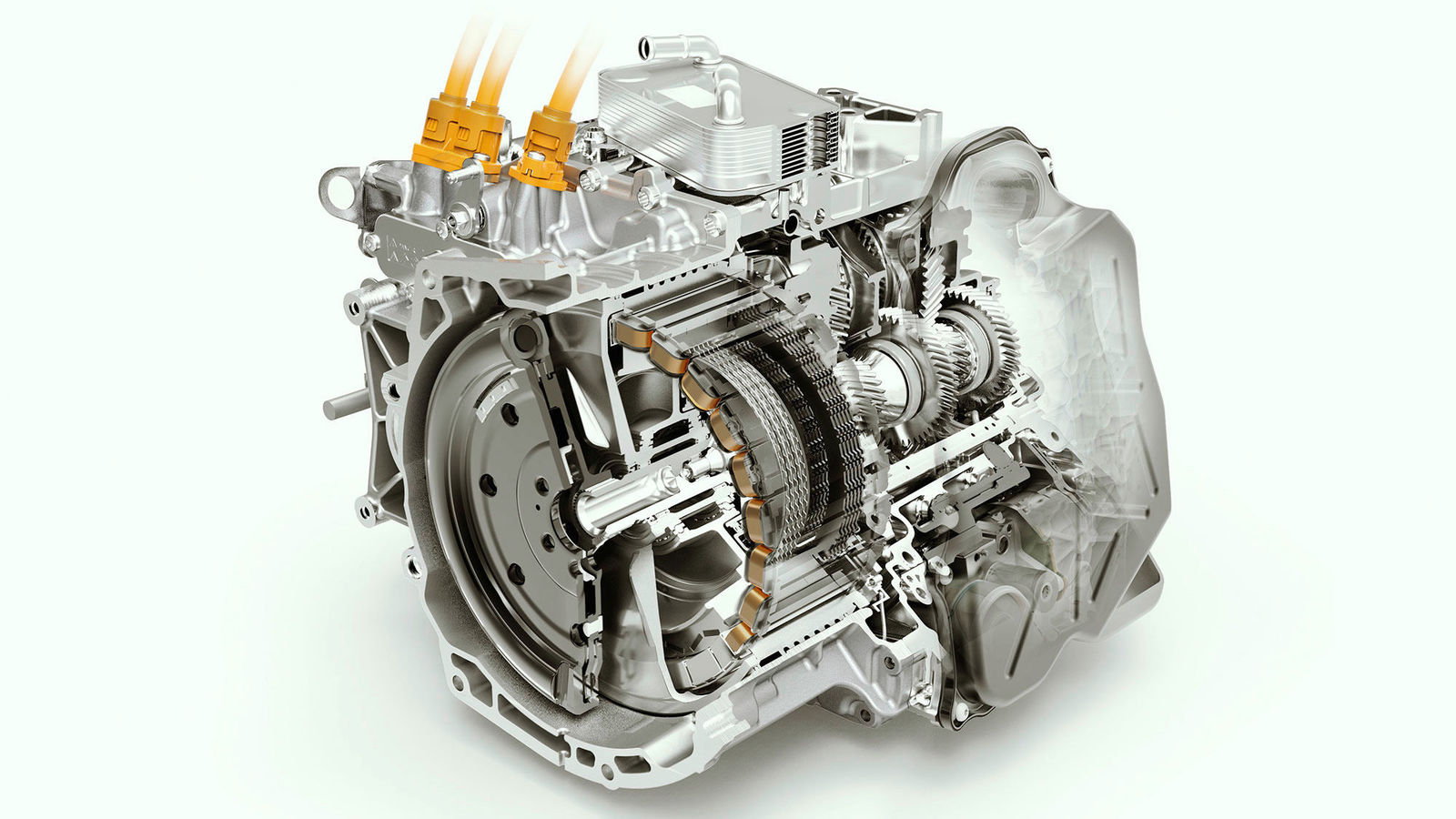 Europe and the USA in particular were two completely different transmission worlds in the period before 2003. While on the old continent only 14 percent of cars (mostly upper-class models) had an automatic transmission, in America it was already 88 percent. This changed with triumphant march of the DSG, particularly in the segments from the Polo to the Golf. Because the efficiency of the DSG was significantly better than that of the torque converter automatic. In addition, the new automatic transmissions were now no longer inferior in terms of fuel consumption and sporty driving style. The DSG gradually gained acceptance from the mid-2000s onwards. It shifted faster than any driver, drove in a sporty manner and saved fuel. 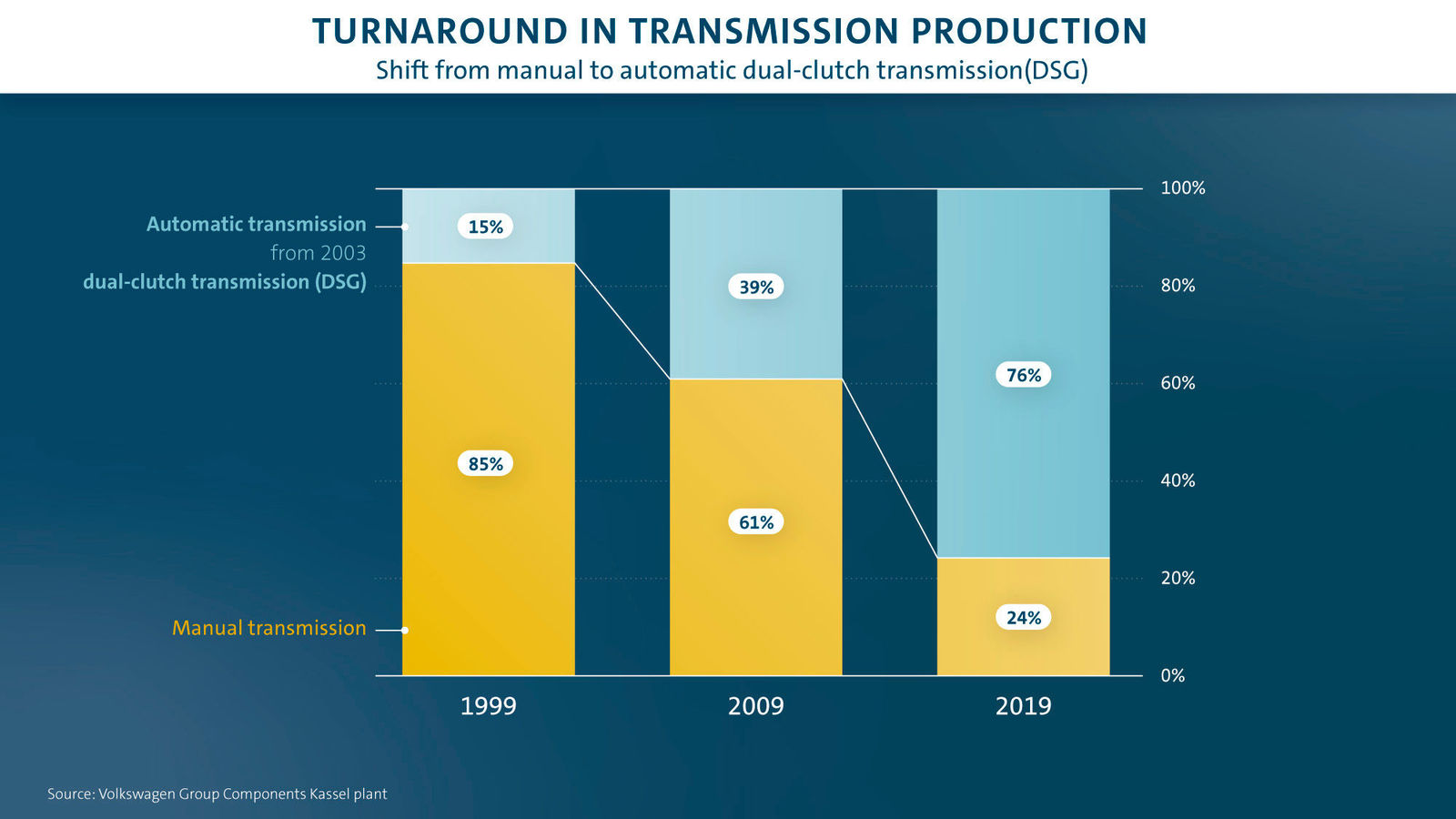 Production of the DQ250 six-speed dual-clutch transmission began in Kassel in June 2003. The Golf, Touran, Passat, Audi A3, Audi TT, SEAT Toledo and ŠKODA Octavia have been equipped with the DQ250. Due to high customer demand, production capacity grew rapidly, with the 500,000th transmission coming off the production line in August 2006 and the one millionth DSG in December 2007. The success of the dual-clutch transmission also led to the development of the DQ200, a transmission for smaller engines, and the DL501 for longitudinal installation at Audi. In October 2015, the Volkswagen Group Components plant in Kassel celebrated an anniversary with 10 million DSG gearboxes produced.

All DSG today have an unusually high shifting performance without interruption of any traction loss. This is due to their special design. Because the dual-clutch transmission actually consists of two automated sub-transmissions – each with one clutch. One sub-transmission carries the even gears, the other the odd gears. Both partial transmissions operate on a common transmission output. For example, if the vehicle is rolling in fourth gear, the third or fifth gear is automatically pre-selected via the second sub-transmission. If the driver now accelerates or decelerates, one clutch closes at lightning speed while the other opens. This makes gear changes a few hundredths of a second quick.

Volkswagen Group Components has continuously developed the DSG further and today offers the customer various variants. The DSG is available for different vehicle classes (small cars to SUVs), engines (petrol, diesel or hybrid) and drive systems (front or all-wheel drive). DSG are now also available for plug-in hybrid models. One example is the electrified six-speed DQ400e hybrid transmission with a maximum input torque of 400 Newton meters, which is already installed in vehicles of the Volkswagen and Audi brands. 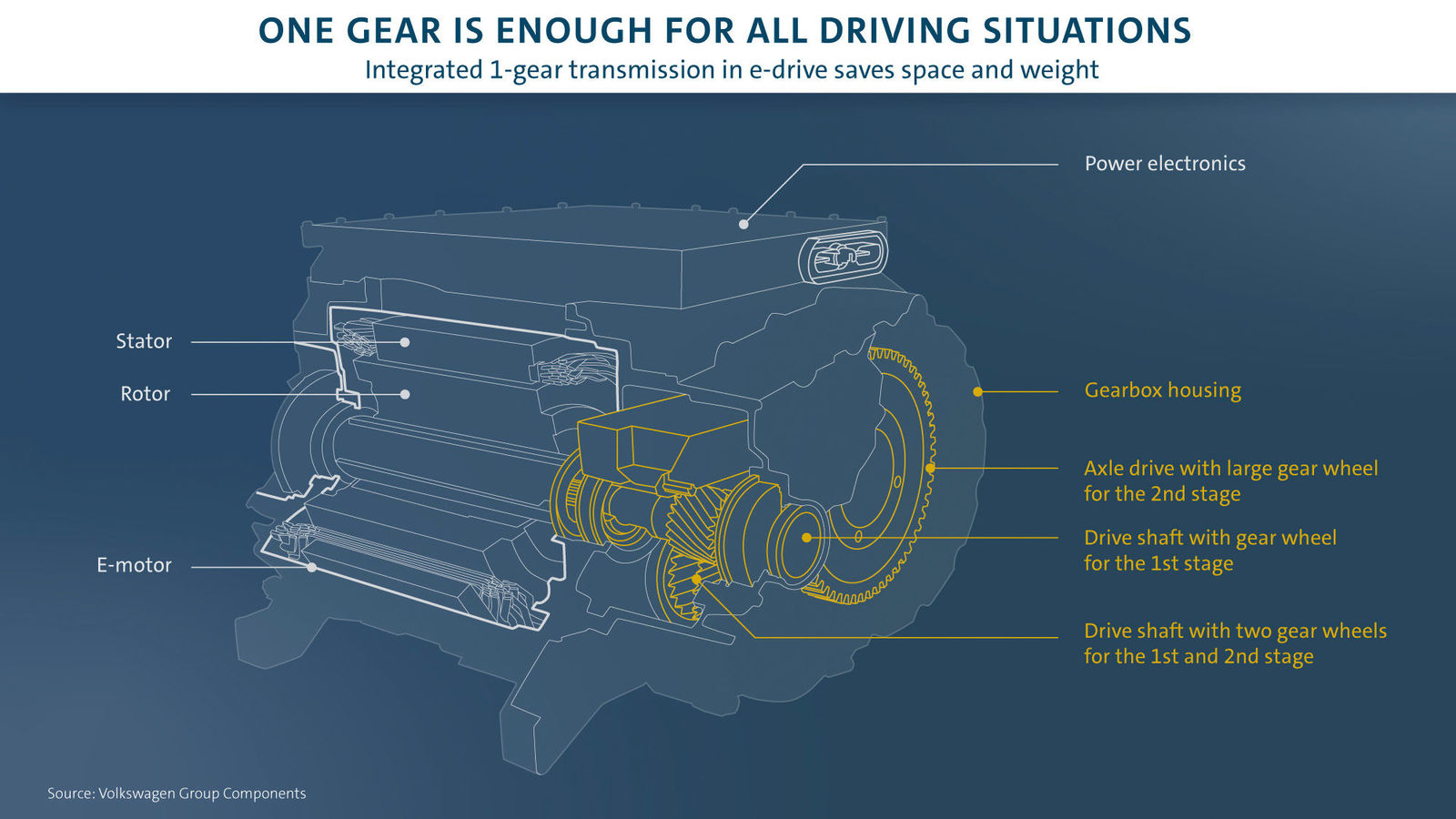 Internal view of the e-drive. The 1-speed transmission is visible on the right side and is very compact.

With the transformation of the Volkswagen Group Components plant in Kassel into the Group’s competence center for electric drives, the site is expanding its product portfolio and, in addition to the existing transmission types, will in future also produce the electric drive for the coming electric vehicles. Volkswagen Group’s first electric car, the e-up!, was launched in autumn 2013. And even then, the electric drive, or e-drive for short, developed in northern Hesse, was the heart of the car. Series production has been underway in Kassel since 2014. In the future, the daily production of the ID. Family will be producing 2,000 e-drives per day.

Compared to a conventional combustion engine, the electric drive brings about some changes: The maximum torque is immediately available in electric motors and remains constant over a wide speed range. The use of a so-called 1-speed transmission is therefore sufficient for the entire speed range. For reversing, the direction of rotation of the electric drive is simply reversed with the help of the power electronics. In the ID.3((ID.3: The vehicle is not yet available for sale in Europe.))), the complete APP310 drive unit with the gearbox, the essential parts of which are manufactured by Volkswagen Group Components, is extremely compact. With just a few gears, it transmits the power of the electric drive to the wheels - one gear is sufficient for all driving situations. As a result, the 1-speed transmission saves space and weight compared to a conventional representative.

The electric drive brings with it another special feature. Since it is significantly quieter than a combustion engine, acoustics play an important role in noise comfort. Even the smallest sources of interference suddenly become audible. At the end of the production line, therefore, not only are performance figures for the electric drive tested, but also relevant values for its acoustics.

All drives manufactured for European and North American e-vehicles on the basis of the Modular E-Drive Kit (MEB) - including the 1-speed transmission - come from the components plant in Kassel. Major additional parts for this are produced and supplied by the Group Components plants in Salzgitter, Poznań and Hanover. 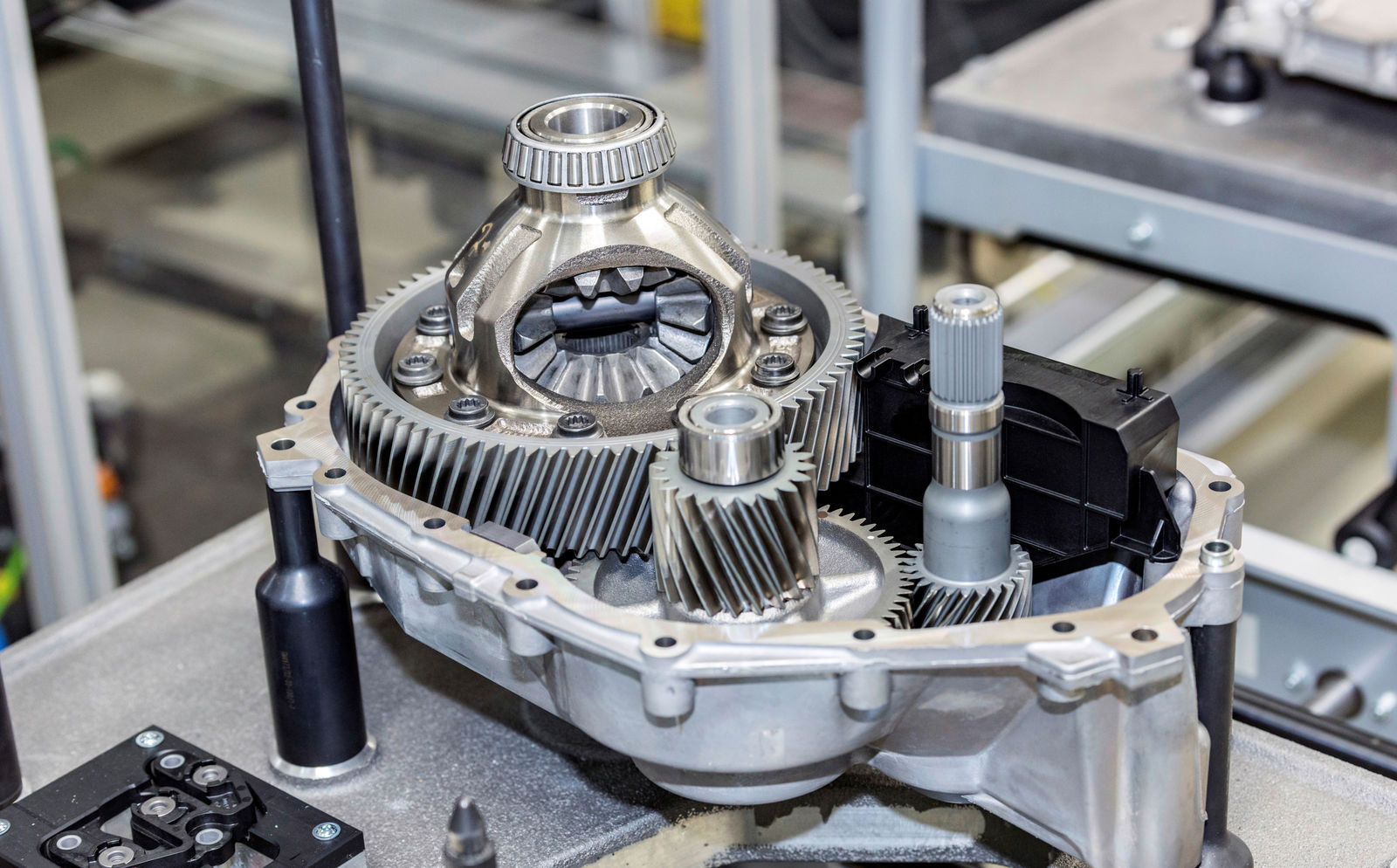 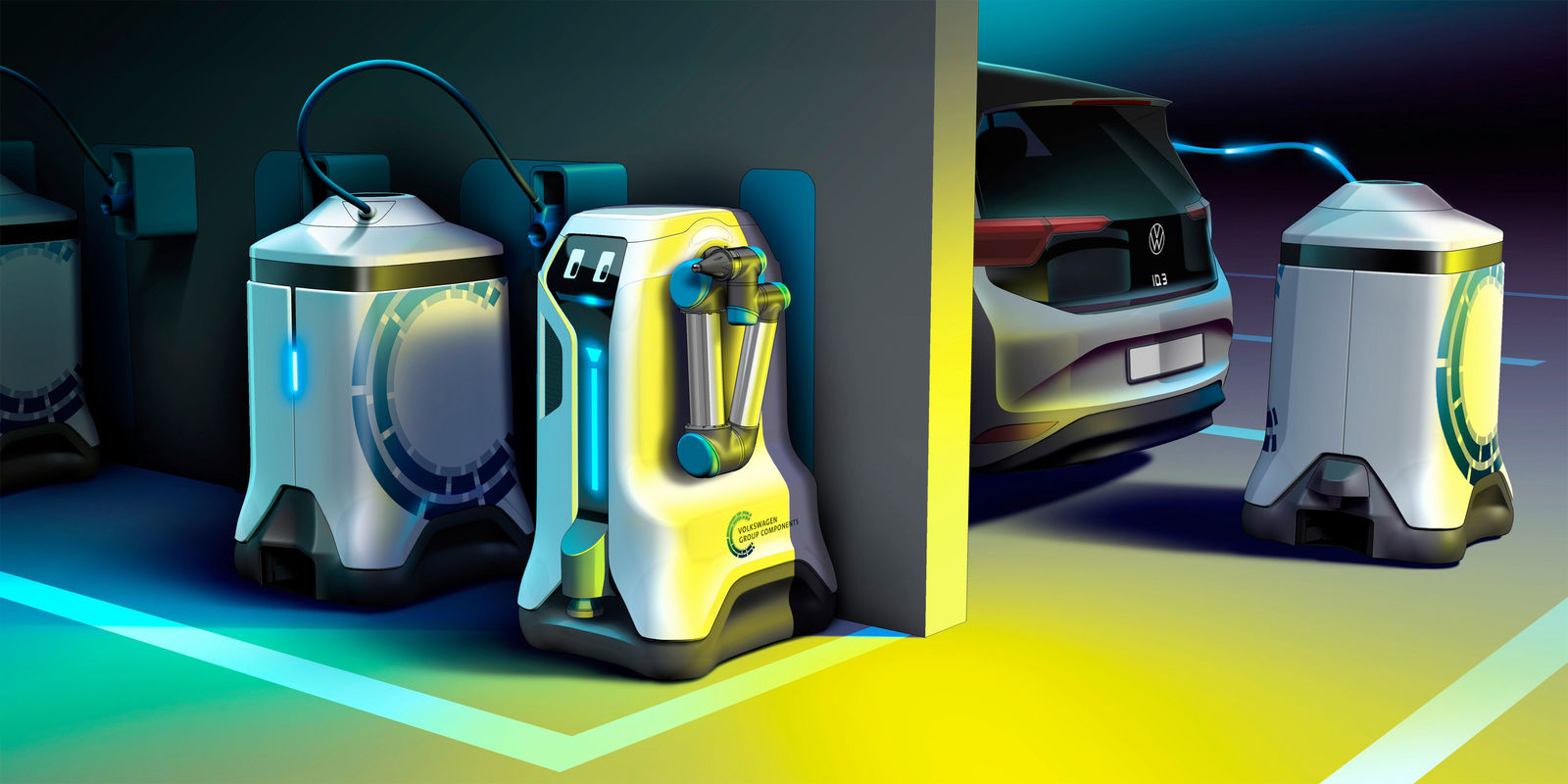 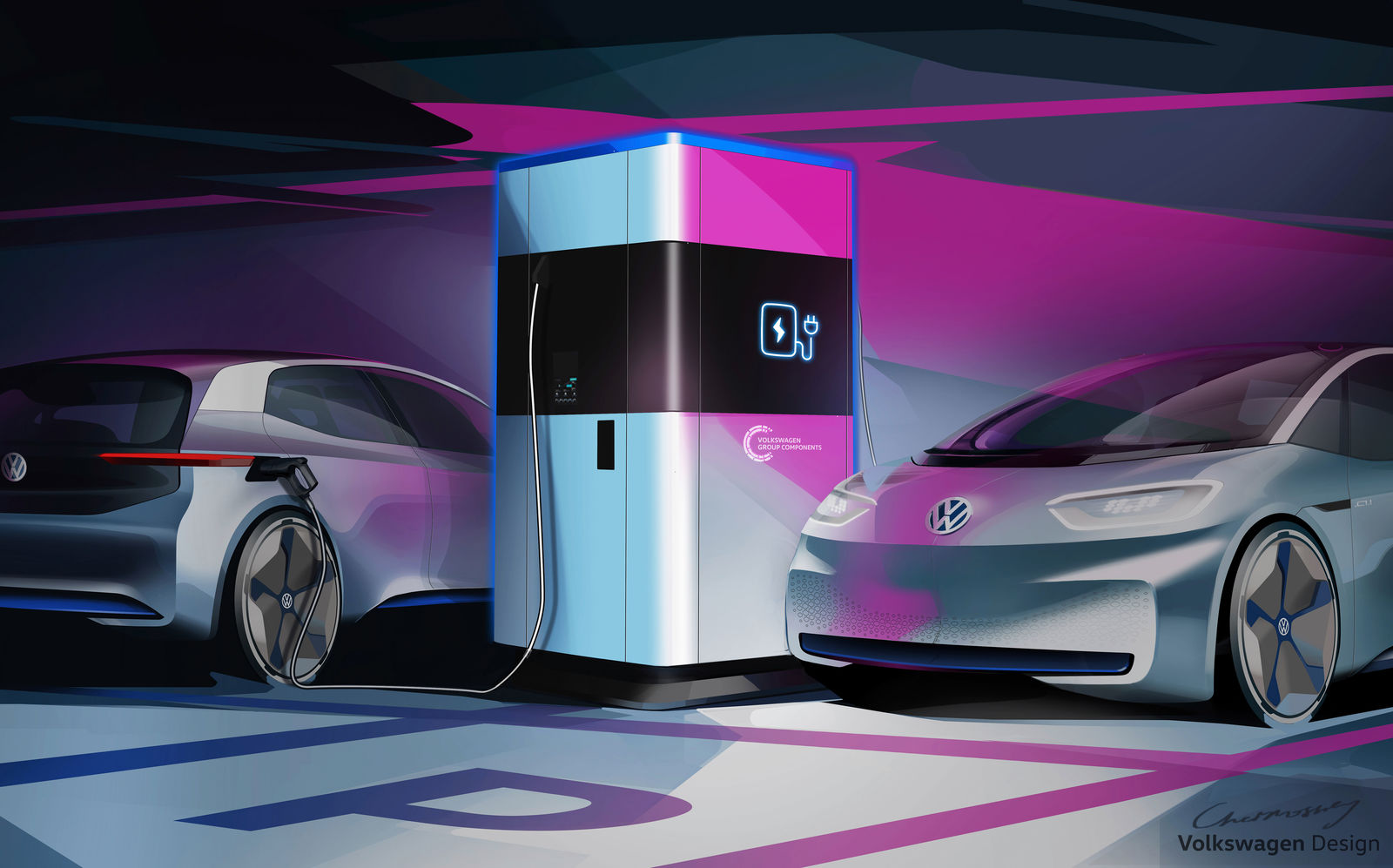 The first power bank for the e-car