Battery or fuel cell, that is the question

E-battery or hydrogen – what is the most sustainable mobility strategy? We explain where, according to the current state of play, the decisive advantages of the e-drive system lie in comparison to the fuel cell. And why Volkswagen’s decision to consistently promote e-mobility is the right one. 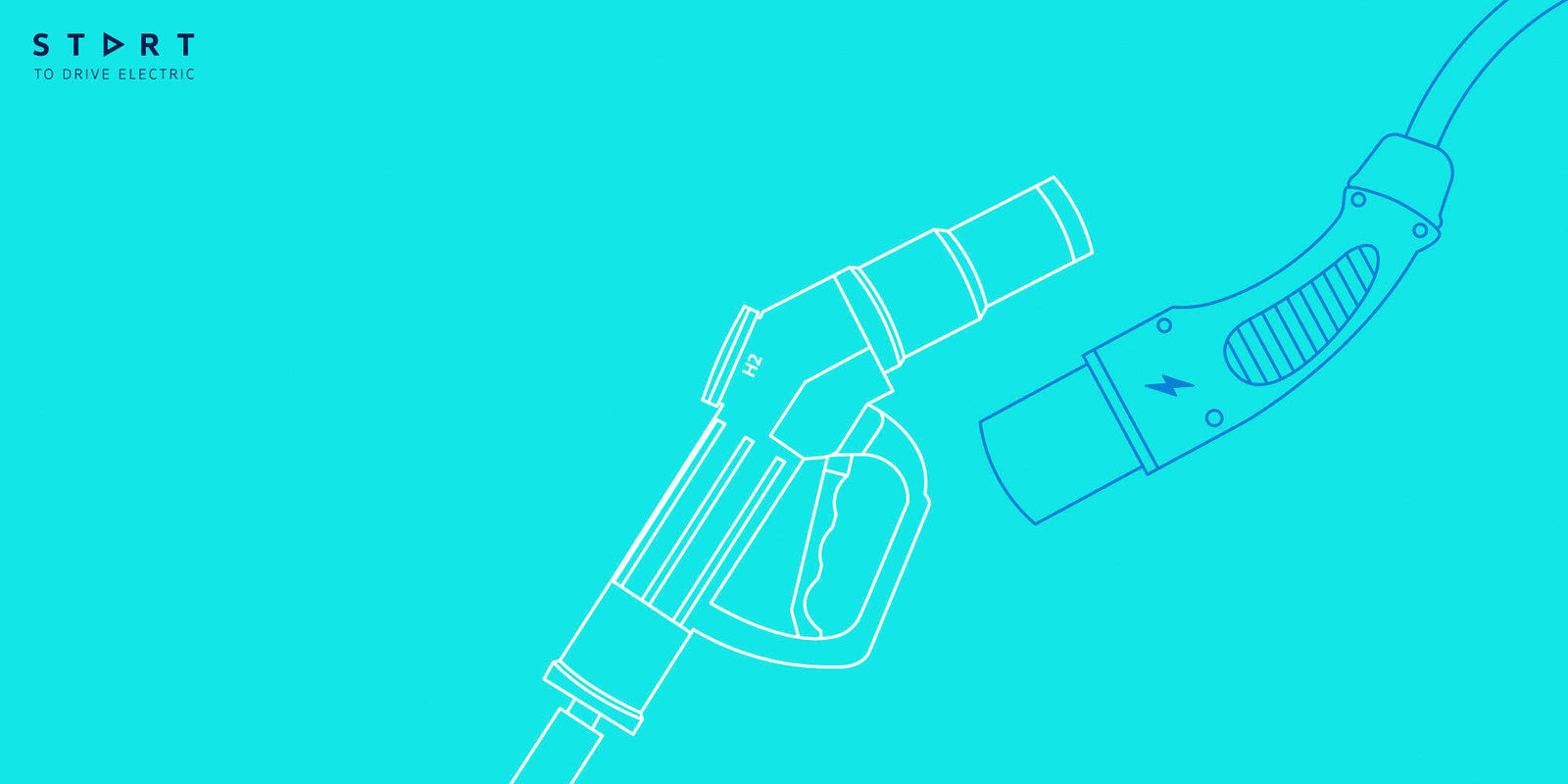 They are all electric cars: but some are powered by batteries, others by hydrogen.

Climate change and fleet requirements for passenger cars make a switch from the internal combustion engine to electric cars unavoidable. The crucial question in the automotive industry is: Should we rely on the battery as an energy storage medium or hydrogen? Or even push both to the same extent and subsequently bringing them both to the road?

Politicians and experts, the media and social forums regularly discuss whether Volkswagen’s decision to press ahead with electric mobility is the right one. Or whether Europe’s largest car manufacturer should not focus more on alternative drive technologies, above all hydrogen-based fuel cell technology.

Science is largely in agreement on this issue, as several recent studies have shown. The Federal Ministry for the Environment, for example, assumes that hydrogen and synthetic fuels, so-called e-fuels, will remain more expensive than an electric drive, as more energy is required for their production.The Agora Verkehrswende (traffic transformation) initiative also points out that hydrogen and e-fuels do not offer ecologically sound alternatives without the use of 100 percent renewable energies, and that, given the current and foreseeable electricity mix, the e-car has by far the best energy balance. In the view of the Fraunhofer Institute, synthetic fuels and drive technologies such as hydrogen in combination with the fuel cell will indeed play a role – but not so much in the passenger car sector, but rather in long-distance and heavy-duty traffic, as well as in rail, air and sea transport. These segments will only be converted in later phases of the energy turnaround, i.e. beyond the year 2030, and closely linked to the expansion of renewable energies.

In fact, hydrogen-based fuel cell technology has one crucial disadvantage: it is very inefficient – both in terms of efficiency and operating costs. This is also confirmed in detail by a Horváth & Partners study, comparing both types of drive for e-cars from the customer’s point of view. 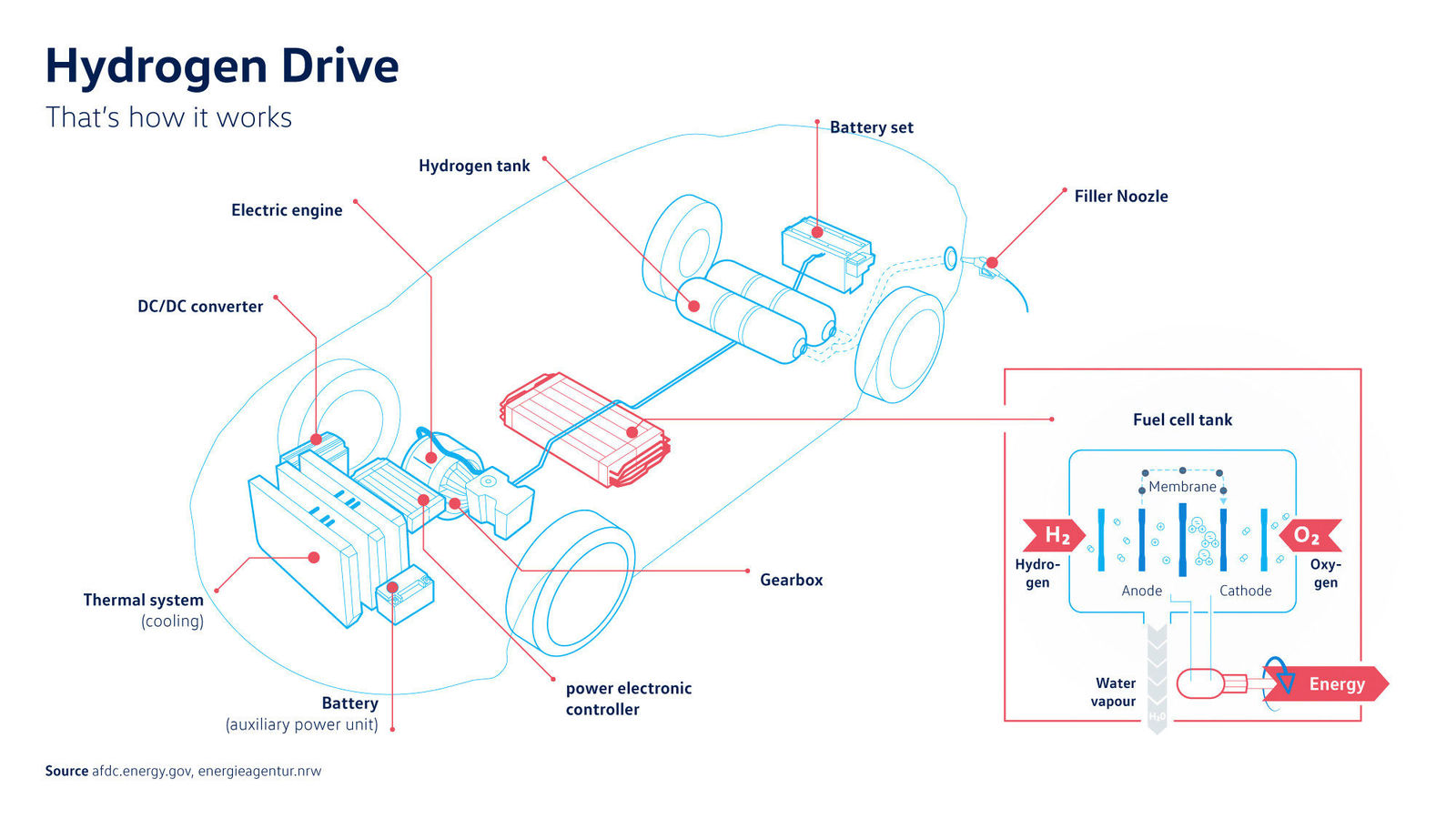 How the hydrogen drive operation works.

In its study “Automotive Industry 2035 – Forecasts for the Future”, the management consultancy recently had a detailed investigation carried out into whether battery- or hydrogen-powered e-cars will become established in the future. The study was prepared over six months, accompanied by 80 people/interview partners and financed by the management consultancy itself. “The main reason for our study was that Horváth & Partners serves many clients in the automotive supply industry. Of course, these clients want to know what to expect in the next 10-to-15 years,” says study director Dietmar Voggenreiter, explaining the report.

So which energy storage system has the best efficiency and is the most cost-effective for powering electric cars? With battery-powered e-cars, only eight percent of the energy is lost during transport before the electricity is stored in the vehicle’s batteries. When the electrical energy is converted to drive the electric motor, another 18 percent is lost. Depending on the model, the battery-powered e-car thus achieves an efficiency of between 70 to 80 percent.

The efficiencies in comparison.

In the case of the hydrogen-powered e-car, the losses are much greater: 45 percent of the energy is already lost during the production of hydrogen through electrolysis. Of this remaining 55 percent of the original energy, another 55 percent is lost when converting hydrogen into electricity within the vehicle. This means that the hydrogen-powered e-car only achieves an efficiency of between 25 to 35 percent, depending on the model. For the sake of completeness: the efficiency is even worse with alternative fuels. The overall efficiency here is only 10 to 20 percent.

In concrete terms this means that a hydrogen car consumes two to three times more electricity for the same distance than a battery car. But we cannot afford this kind of energy waste. The scarce green electricity must be used as efficiently as possible in the future. Hydrogen would therefore be a serious mistake for passenger cars. “In addition to the very real potential of green hydrogen, there is a dangerous hype going on right now," warn experts from the Boston Consulting Group (BCG) in a study quoted by the Handelsblatt. The Horváth&/Partners study comes to the same conclusions.

However, hydrogen offers very promising prospects – although not for cars. The authors of the study conclude that investments should rather focus on other areas where they make ecological and economic sense. “We believe that there is great potential if green hydrogen is pushed into applications where it can really establish itself in the long term. Above all in industry, but also in heavy-duty transport, aviation and shipping,” says Frank Klose, co-author of the study.

From every angle of the environmental balance sheet, everything speaks for the battery-powered e-car. The technology is mature and ready for the mass market. The number of models is growing steadily. And with the battery-powered e-car, driving remains affordable. Current e-models are already at the price level of comparable combustion engine models. In contrast, the hydrogen car will always remain more expensive than the battery car – due to the complex technology and high fuel costs. Drivers already pay around nine to twelve euros per 100 kilometers for a hydrogen car, while battery cars cost only two to seven euros per 100 kilometers (depending on electricity prices in individual countries). And the topic of long-distance travel? That will soon no longer play a role. With the new generation of e-cars, ranges will increase to 400-to-600 kilometers, while charging will become increasingly faster.

The conclusion is clear: in the case of the passenger car, everything speaks in favor of the battery and practically nothing speaks in favor of hydrogen. “No sustainable economy can afford to use twice the amount of renewable energy to drive with fuel cell passenger cars rather than battery-powered vehicles,” says study leader Dietmar Voggenreiter. This is also the view of customers: In Germany there are already more than 130,000 battery cars on the road – but only 507 hydrogen cars... 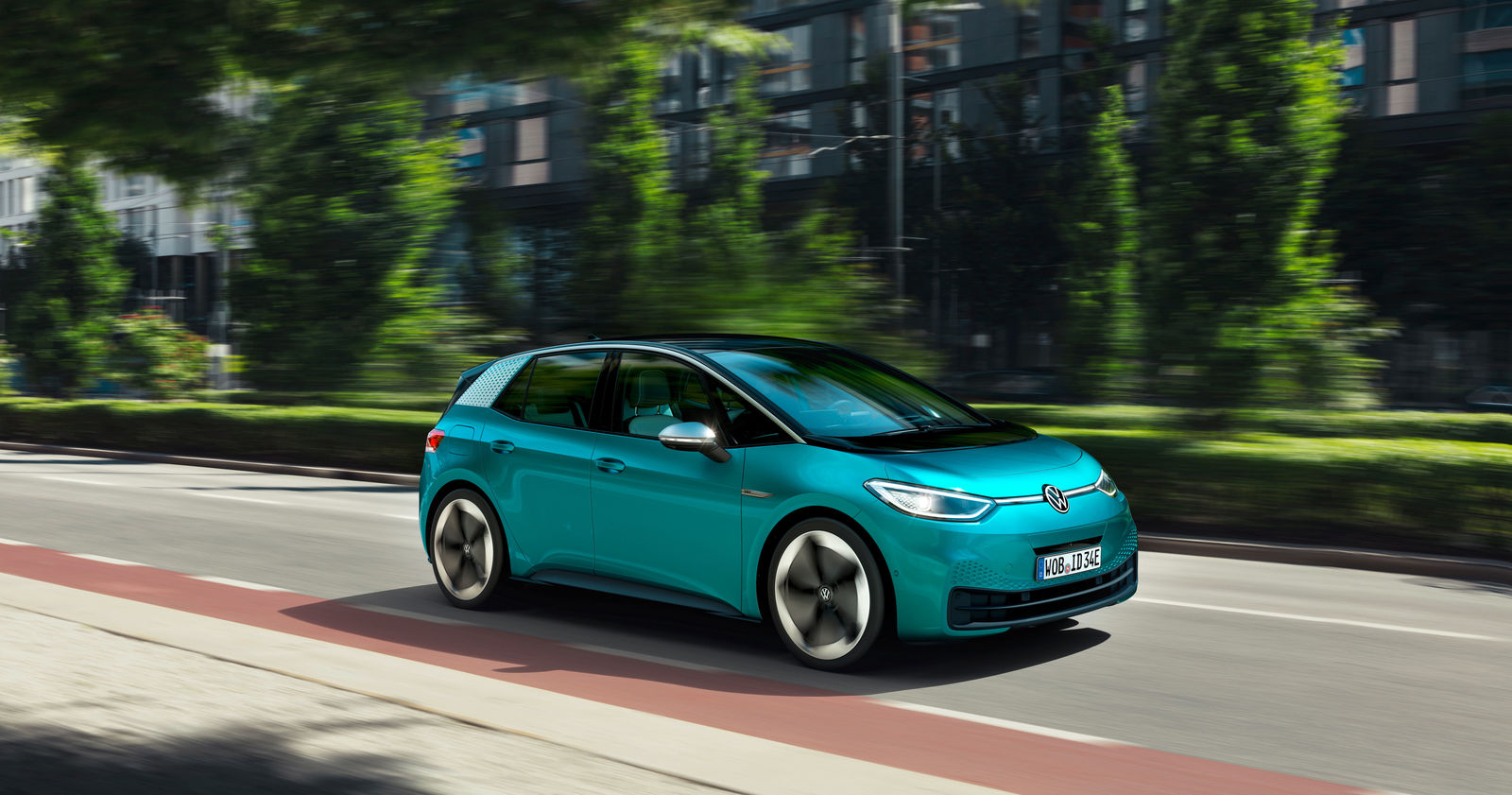 The ID.3 is the first fully electric car from the Volkswagen Group. It made its debut at the IAA in Frankfurt and achieves between 330 and 550 kilometers of fully electric range ... 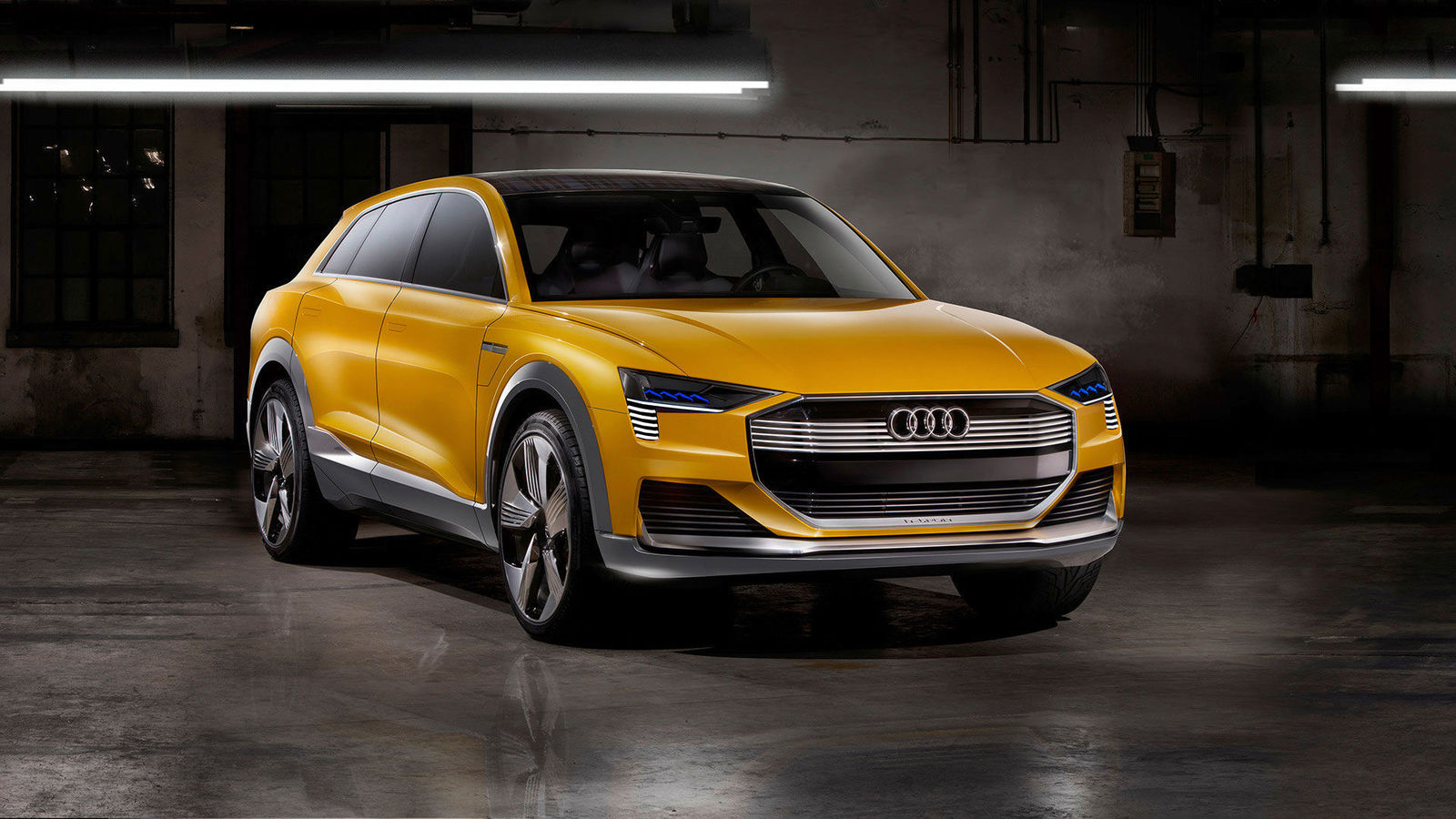 … while the Audi-h-Tron-quattro is a concept car that runs on hydrogen: At 700 bar pressure, they store around six kilograms of hydrogen – for a range of up to 600 kilometers. It takes around four minutes to fill up the tank – similar to a combustion engine powered car.

„We need a European
Masterplan for e-mobility“