The Volkswagen Beetle – A Success Story 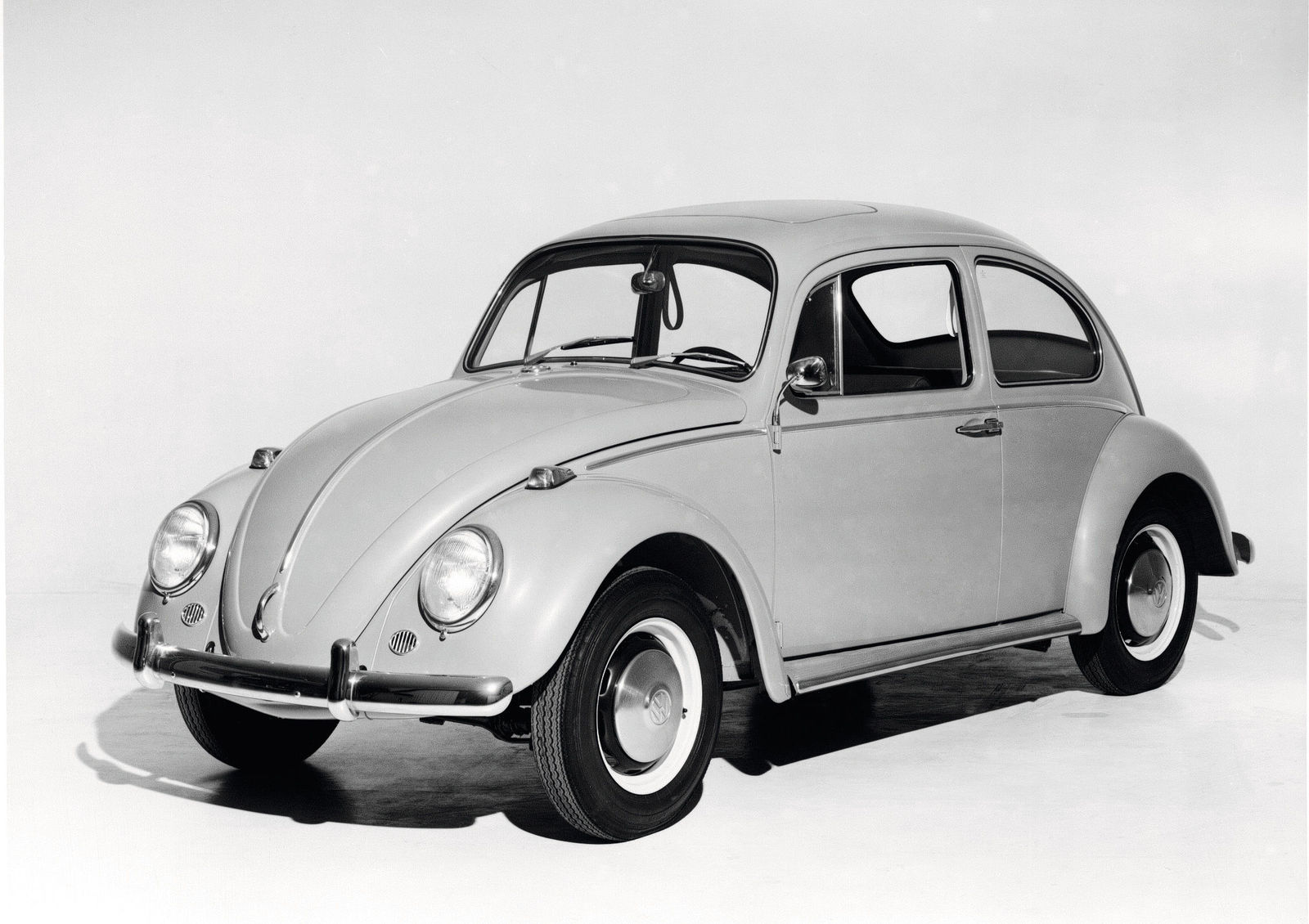 Volkswagen Beetle - the sound, the humor, the smell, the feel, the maneuverability, the image

The typical sound of a Beetle.

People of the Beetle Generation sit up and take notice when they hear it today. They are strangely touched, experience melancholy, as though remembering something long since lost.

It is a sound as unmistakable as the Beetle's silhouette: it buzzes, it putters - all against a background of soothing fan noises - a feeling of euphoria which has underscored our mobility for decades and which was the accompaniment for our independence and for growing prosperity during those years.

Beginning in the late 1940's and continuing into the early 1980's, the unmistakable noise of the Beetle left its mark on the sound backdrop of German streets. And in other places, as well, the air-cooled Beetle Boxer was the lead instrument in the noisy traffic concert.

This is why Volkswagen advertising from the Doyle Dane Bernbach (DDB) agency at the end of the 1960's, advertising that is already legendary today, was titled "What the world loves about Germany"; it included a colorfully mixed collection of pictures: Heidelberg, a cuckoo clock, sauerkraut with dumplings, Goethe, a dachshund, the Lorelei - and a Beetle.

Indeed: The Beetle acted as Germany's ambassador all over the world - with a sound that you couldn't overhear, with a presence that you couldn't mistake and, at the same time, with an appeal that was unmatched. For decades, it was the most popular imported car in the USA. And in 1967, it was on the up-and-up on the island of Nauru in the South Pacific. There, the "What the world loves about Germany" advertisement cheekily concluded, VW sales had increased by 200 percent: "from one to three Beetles."

The humor.
The typical Beetle humor.

Although every child knew that the Beetle engine was air-cooled, in the middle of the 1960's, as winter was starting, VW took out full-page ads to caution: "Don't forget to put antifreeze into your VW." It wasn't the Boxer engine in the back that they meant. They meant the tank for the screen wash fluid, located in the front, under the spare tire - "Because we know how to cool an engine with air. Because we still don't know how to wash a windshield with air."

The advertising copy writer didn't mention whether Wolfsburg was working on an air washer - but it wouldn't have surprised the Beetle's contemporaries. After all, at the time, one Beetle witticism had already long occupied a place in the German sayings: "Air doesn't freeze. Air doesn't boil over."

Water-cooling in a Volkswagen?

Just as unconceivable at that time as a change in the Beetle design would have been - even after it had long been considered conservative, or, yes, even outdated. Volkswagen played with progressive mockery in its advertising - and attracted the approval of those who loved the Beetle the way it was and would always stay. "As early as 1948, many felt that we should change it," was the caption under the picture of an early "pretzel" Beetle in 1965. There was something to this view. That's why VW has changed or improved 5,002 of the 5,008 Beetle parts until now. Only the Beetle shape - the typical silhouette - stayed the same.

In the beginning of the 1960's, another VW advertisement explained: "Some shapes just can't be improved." It showed an egg with a Beetle rear end painted on. A good 15 years later, when the Golf era had already begun, the VW advertisers repeated the pithy egg theme on the occasion of a sad event. In Emden in 1978, when the last Beetles built in Germany rolled off the assembly line, the slogan under the painted advertisement egg read: "We have kept the shape. Until the very end." And - virtually defiant: "And almost 21 million Beetle buyers around the world thought that was just right."

The smell.
The typical smell in the Beetle.

It, too, was alright for VW drivers: When you breathe deeply in the Beetle, you inhale a whiff of a hot machine, mixed with the smell of warmed-up carpeting. Therefore, the Beetle's competition promised "odorless heating" as an advantage of their products, not suspecting that it was just this breath of hot air that contributed to the seductive aura in the Beetle. Produced in heat exchangers, streaming out of gaps in the sill, it underlines the unmistakable personality of the Beetle like a fragrant perfume.

As only the Beetle Generation still knows, this usually only lukewarm wind was considered a privilege at the start of the Beetle success story, as a luxury in times when other automobiles didn't have any heating at all. Their drivers had to squeeze in behind the steering wheel wearing thickly padded coats and gloves. Early Beetle owners, on the other hand, needed only a warm pullover for winter drives.

And that was a good thing. Because when you have company on your drive in the Beetle, you already enjoy close, warming contact with the person next to you. It's true that the hat can stay in its usual place, thanks to the ample head room. But pipe smokers would be well advised to stow their Dunhill before the trip starts. Otherwise, they may just collide with the windshield.

The Beetle body was always cramped, intimate. And it is so carefully sealed that it takes a lot of force and feeling to close the doors so that they are not catapulted back by the compressed air - air that smells like a machine, like carpeting and sometimes even like tobacco smoke.

The feeling.
The typical feeling in the Beetle.

It is a luxurious sense of security that this automobile bestows on its owner - and naturally also on the owner's offspring. Small children of the Beetle Generation were protectively settled into the hollow for luggage behind the rear seat. Soothing Boxer engine sounds and music from the radio rocked them to sleep.

The Beetle Generation grew up with - and in - the Beetle. As years passed, they moved from the place under the oval window in the '52 model, to the rear seat of the already lighter '57 model, from the rear seat in the early 1960's to the front passenger seat (long forbidden for today's children).

The first secret driving lessons on forest paths followed, in the 1966 Beetle 1500; a little later came the exciting lessons at the side of the driving instructor, naturally in a Beetle; and finally came the driving test, with the strict driving examiner squeezed into the back seat.

"Why is it that thousands of people learn to drive in a VW each year?" VW asked in an advertisement in 1967, in order to come right back with the answer: "Because it is so easy to drive. Ask your driving instructor. His example has caught on."

Driving a Beetle has something dexterous to it, which is not defined by its speed, but instead by its ease of use.

Smooth steering, pedal use and gearing, immediate reaction to the driver's commands - at that time, in the 50's and 60's, this was definitely not taken for granted the way it has been since the middle of the 1970's, in the epoch of the Volkswagen Golf. In its time, the Beetle set the standard in its class - like the Golf did later.

Such qualities especially drew in the Americans, who were used to juggling unmanageable space ships. Arthur Railton, journalist and member of the board of Volkswagen of America in the 1960's, described the German David in relationship to the American Goliath like this: "They bounced in and out of the line of traffic in front of you. They darted into the parking space that you just wanted to take. They buzzed past the others in snow, and their rear air slots looked as they were grinning and laughing at the helplessness of the others."

The American magazine Consumer Reports already put its finger on the effect of the Beetle in November 1952: "If you are tired of ordinary cars, the Volkswagen is a refreshing change." And two years later, Lawrence Brooks, test consultant for the same magazine, euphorically judged the Beetle: "...one of very few cars that ... evoke enthusiasm, because they are really fun to drive..."

In November 1955, Leo Donovan was already rubbing his eyes in wonder in the US magazine Popular Mechanics: "... a car, small and underpowered. But whose dealers can't get enough delivered, its sales are so spectacular. And all without free trips to Paris ... and without discounts. Which car is so unbelievable? It's the small, beetle-like Volkswagen. Its dealers even have delivery times for used models."

The image.
The typical image of the Beetle.

"No other automobile has had such a social effect," wrote Arthur Railton in "The Beetle", his hymn to the car, "it has become a part of our folklore. It has its own mythology. People wrote books about it, issued magazines featuring it, produced films with it as an almost human star ... The Beetle was the center of hundreds of jokes and a symbol for caricaturists ... for the rebellion against the Establishment."

The Beetle was not flashy and pompous. But it was also more than just pure practicality. Like no other automobile before or after it, the Beetle absolutely lent its owner status - if that's what the owner was after. But right from the start, the Beetle was a status symbol of classlessness - both materially and intellectually.

In the middle of the 1960's, the VW advertising was already serving just this uniqueness of the Beetle, which sales strategists today call "USP" (Unique Selling Point): "You can't tell what its driver is by looking at the car. For example, whether he is lucky with women or on the stock market. Or even both. Whether she owns property in Switzerland. Is one of the prominent figures in national politics. Reads Plato in the original Greek."

And not quite ten years later, in July 1971, the German motor magazine auto motor und sport joined in with its analysis: "While almost every other car is categorized according to engine capacity, power and price, and therefore invites certain conclusions about the social status of its owner, the Beetle has created an absolutely classless image for itself. Anyone can sit in it without having to be afraid of giving those around a more intimate look into his or her personal circumstances..."

Meanwhile, the Stuttgarter Blatt newspaper erred in another assessment of the Beetle. "There will never and can never be a really genuine Anti-Beetle," Reinhard Seiffert summed up in 1969, as the conclusion of his Beetle test. "No one can build it - not even the Volkswagen factory itself."

Not quite five years later, in May 1974, the people in Wolfsburg provided proof to the contrary. Suddenly it was there, the "Anti-Beetle", with all the Beetle qualities, but without its defects - conceived by the Beetle Generation, built for the future Golf Generation.