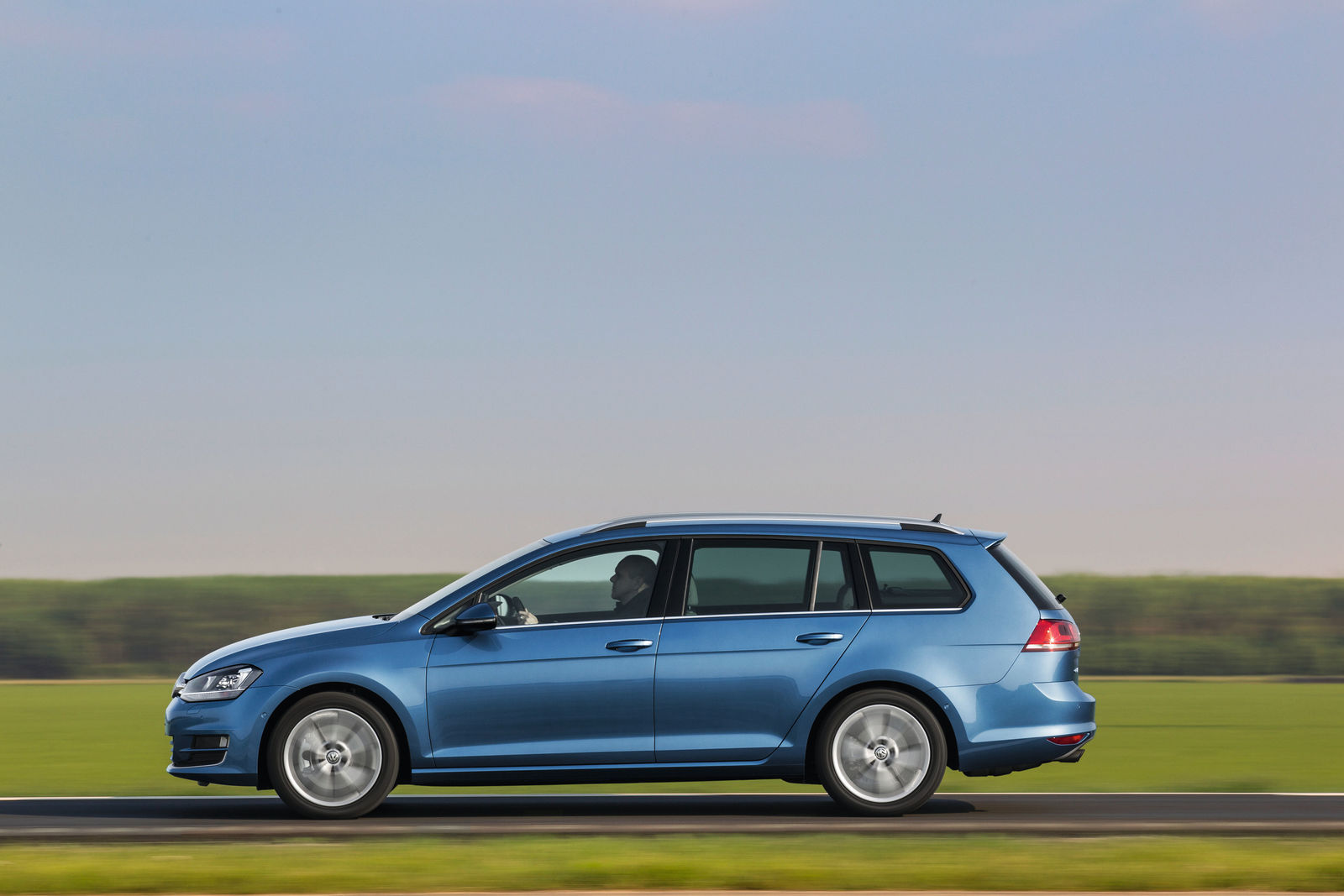 The Golf Estate is now longer, wider and lower. These "sharper" proportions in themselves give it a sportier and more distinctive look than the previous model. Its new styling fits this image. Perfection in the details is evident in such prominent features as the D pillars. Here, designers succeeded in transferring the taut form that is so typical of the Golf – like the chords of an arc with an inset arrow – from the C pillars to the D pillars. The styling with its precise lines creates a sporty and impressive look. In the interior, meanwhile, the new Golf Estate scores with its tremendous variability, up to 1,620 litres cargo space and a material quality that breaks the barriers to the premium mid-class.


The new Golf Estate is 4,562 mm long (28 mm longer), 1,799 mm wide without door mirrors (18 mm wider) and 1,481 mm tall (23 mm lower) including the standard roof rails. The wheelbase was also made longer at 2,635 mm (gain of 57 mm). This dynamic of proportions represents the foundation for an extraordinarily impressive design; up to the termination of the front doors, it follows the precise lines of the Golf hatchback model. However, the most independent and visually dynamic styling of the Golf Estate since the model series was created develops from the B pillars towards the rear.


Side profile – C pillar becomes D pillar. The estate car was a planned member of the model range right from the outset; that is, the new Estate was not derived from the four-door vehicle but was developed in tandem with it. That is why the side profile of the new Golf Estate shows particularly distinctive lines. Yet, despite all of its independent styling, the Estate can still be immediately made out as a Golf: as mentioned, the designers transferred the form of the typical Golf C pillar to the D pillar of the Estate. Visually, this has made the "third" side window part of the D pillar.


Furthermore, in contrast to the classic Golf what is known as the character line is continued behind the rear wheel arches and extends over the vehicle's entire rear section. This design gives the rear body area a very muscular look. The precise design of the window sill (upgraded by a chrome trim in the top version), this dynamism is highlighted by the long side window surfaces and the slightly rearward-sloping roof with roof spoiler. As a result, the side profile of the new Golf looks more extended, exclusive, powerful and sporty. The standard roof rails were integrated elegantly into the roofline.


Rear section – typical Golf, even from the back. The new two-part rear lights of the Golf Estate emphasise its family affiliation to the model range and the brand. The half of the rear light that is integrated in the boot lid, however, is larger than in the hatchback version and forms a longer line that is parallel to the shape of the lower tailgate area. Also making a clear differentiation between the Golf Estate and the "classic" Golf is the design of the tailgate and the middle of the bumper. While the licence plate of the hatchback model is mounted in the bumper, the designers of the Golf Estate decided to integrate it in the boot lid again – similar to the previous estate car.


Along with its stylish aspects, the rear section is, as can be expected, a very practical area as well. Consider the loading sill: it is just 630 mm high, which simplifies loading and unloading. Take the tailgate opening, for example: measured plumb to vertical it is 675 mm tall; measured within the plane of the tailgate – i.e. diagonally – it is 762 mm. The tailgate opening is quite wide at 1,031 mm.


Front end. Volkswagen design DNA also expresses itself in the new Golf Estate as a "face" with appealing traits; this involved defining horizontally balanced elements that generate a certain visual width. Every class of Volkswagen also has its own characteristics; in the Golf class they include the headlights that curve slightly upward and a defined maximum height of the radiator grille. At its bottom, the radiator grille is bordered by a chrome fin; in the case of xenon headlights, it is continued into the headlight housings.


In contrast to the previous model, the current Golf Estate is based on an entirely new modulation of surfaces. While the wings were higher than the bonnet on the Golf VI Estate – essentially framing it – the situation is now reversed on the Golf VII Estate: On the sides, the creased edges form the lowest points of the wings; before they transitioned vertically into the wheel arches. In an upward direction, the wings are bordered by a line that looks as though it were cut by a knife and which originates in the A pillars. Altogether, the lines lead to a V-shaped bonnet.


Storage space dimensions. The new Golf Estate is a sporty-elegant allround vehicle which combines its low fuel consumption values yet dynamic driving performance with very high quality and variability. For example, compared to the previous model its cargo capacity increased a considerable 100 litres to 605 litres (loaded up to the rear seat backrests). When the cargo space with its minimum width of 1,003 mm and minimum height of 936 mm is utilised up to the backrests of the front seats and to the roofline, it offers a capacity of 1,620 litres (125 litres more than in the previous model). The cargo space length up to the rear bench is 1,055 mm; up to the backrests of the front seats it is 1,831 mm, representing an overall gain of 131 mm. When the backrest of the front passenger's seat is folded (Comfortline), objects up to 2,671 mm in length can be transported. As mentioned, optimal space utilisation of the cargo space corresponds to the basic dimensions of the tailgate opening (675 mm tall; 1,031 mm wide).


Storage space features. The cargo floor of the standard illuminated cargo space can be varied in height or be removed entirely with just a few hand movements whenever maximum storage capacity is needed. Also on board as standard equipment: a cargo space cover that is designed with a retractable shade that has an automatic two-stage roller mechanism. When it is not being used, both it and the net partition can be stowed under the cargo floor. Another newly designed and now more practical feature is the remote unlatching of the rear seat backrests and the backrest folding process itself. The 60:40 split backrests can now be unlatched from their locked positions by easy to operate levers in the side wall of the cargo space; then the backrests automatically tip forward, and together with the cargo floor they form a nearly level cargo surface. Colour-coded pins in the outer area of the rear bench seat make it easy to determine whether the backrests have been properly latched again. Last but not least, four practical bag hooks have also been installed in the luggage compartment.


Space for journeys. The new Golf Estate also benefits from the basic concept of the modular transverse matrix with regard to its spatial economy. Although the Volkswagen was lowered in height by 23 mm, interior height in front was improved by 9 mm to 981 mm and at the rear by 11 mm to 980 mm. In addition, rear passengers now have 5 mm more legroom. Another plus is elbow room at all five seats; in front, it grew 23 mm to 1,469 mm, at the rear it grew 4 mm to 1,441 mm. Although the gains here are just millimetres, the interplay of all of these dimensions yields a perceptibly larger interior.


In its interior, the Golf Estate also overcomes class boundaries in terms of its highquality materials and the exclusive appearance of its design. When stepping into the new model from the Golf VI Estate, the wide centre console is immediately apparent; it is more typical of the premium class than the compact class. Centrally mounted on the centre console beneath the hazard flasher switch is the infotainment touchscreen that is between 5 inches (standard) and 8-inches in size with its main menu keys and turn knobs. This is the first time that Volkswagen is implementing an optional touchscreen generation with proximity sensors and functionality that reacts to wiping movements of the fingers (wiping and zoom finger movements).


Beneath the infotainment module are the clearly laid out controls for the standard air conditioning system. Under this is a locking storage compartment with integrated multimedia interfaces; the compartment is large enough to store a smartphone. Beneath this, the lower section of the centre console runs in a line to the large centre armrest. To the right of the driver are the buttons for the new electronic parking brake and its Auto Hold function. Another storage compartment is concealed under the centre armrest that is standard from the mid-level Comfortline version; it is adjustable in length and height. The array of storage options is rounded out by large storage bins in the doors (including storage for 1.5-litre bottles). Volkswagen has maximised the use of every millimetre to make the Golf Estate an allround vehicle that cuts as good a figure as a business car as it does as a personal car.