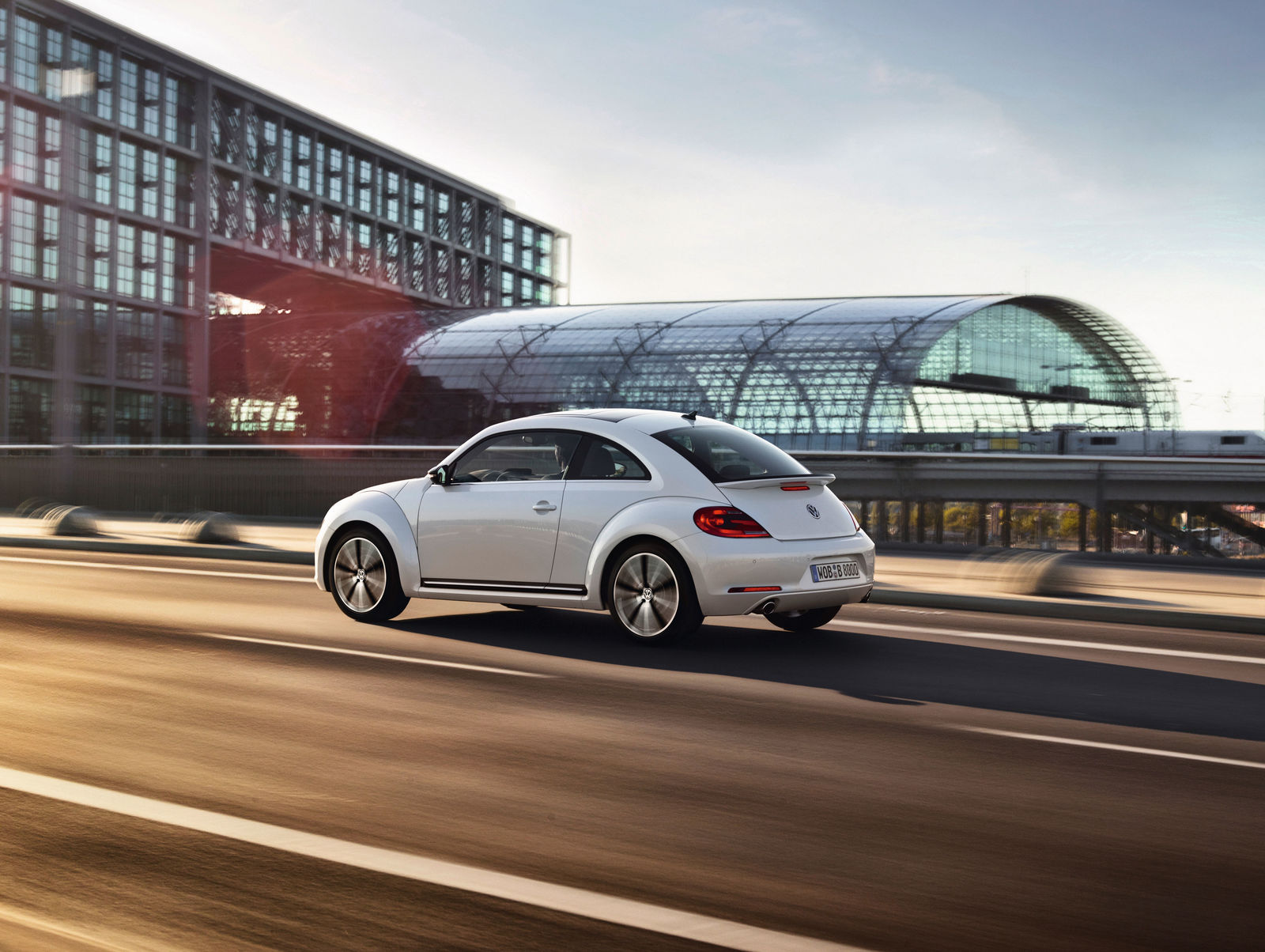 What happens when a company reinterprets a design – as in the case of the Beetle? The Coke bottle, iPhone, Ray Ban Aviator, Porsche 911, Leica M9 and the Beetle – can you reinvent a design that is so recognisable and independent? The unequivocal answer is yes. But it is necessary to understand the product and the brand; then it works! Volkswagen Design Chief Walter de Silva (Group) and Klaus Bischoff (Volkswagen Brand) "understand" both the product and the brand, and so they set this as the objective for the Beetle: "Design a new original!" The Beetle of 2011 is the new original.

Under the leadership of Bischoff, the crew set to work, taking on the inspiring challenge of designing a new Beetle. The designers still had to work with an icon, which – in terms of its unique form – was really only comparable to the Porsche 911 among German automobiles. The designers knew that they wanted to develop the original Beetle profile more than they had with the 1998 New Beetle. To get back to the car's roots. A key priority was very dynamic proportions. An interesting aspect was that more than a few of the members of the team actually own their own air-cooled Beetles. It has also become a cult car among younger designers at Volkswagen.

And that is how the final design of the 2011 Beetle came to be in Wolfsburg – a car of today as well as a design tribute to the automotive seed of an entire corporate group. And unmistakable indeed: If one were to take the first Beetle and the new Beetle and place them in a room together – illuminating their roof lines and viewing their silhouettes – one would see nearly identical lines in the rear sections. Clearly, the Beetle makes fundamental stylistic references to the original Beetle. And that is how it should be!

A comparison to the 1998 New Beetle shows this: nothing remained as it was on the old car: "The Beetle is now characterised by a clean, self-confident and dominant sportiness. The car not only has a lower profile; it is also substantially wider, the front bonnet is longer, the front windscreen is shifted further back and has a much more swept-back angle. All of this creates a new dynamism," explains Klaus Bischoff. While the New Beetle was defined by 3 semi-circles – front wing, rear wing, domed roof above it – the new model has broken free of this geometry. The roof profile actually runs distinctly lower and can be considered a continuation of the Ragster concept car shown in Detroit in 2005 – a type of hot rod based on the New Beetle. The new Beetle is bolder, more dynamic, more masculine.

The new car is 1,808 mm wide (gain of 84 mm), 1,486 mm high (12 mm lower) and 4,278 mm long (gain of 152 mm). This has resulted in entirely new proportions. The gain in length meant that the roof could be extended further, the front windscreen could be shifted back, and the rear section could follow the contour of the original Beetle. The new focal point is the C-pillar. In parallel, the development team increased the car's track widths and wheelbase. All of this gives the Beetle a powerful appearance with muscular tension.

Volkswagen DNA – styling for our times

Despite all of its individuality, the car's styling follows the Volkswagen design DNA created by Walter de Silva and Klaus Bischoff. It clearly expresses itself in the horizontal image created by the front bumper, front air inlet, straight lines of the bonnet edges, the precisely drawn line between the A-pillar and C-pillar and styling of the rear lights. The Beetle of today transfers the original design of the icon to the year 2011 – to the age of interactivity.

All of the Beetle's typical styling characteristics were preserved, and this should come as no surprise; after all, it was vehicles like the Beetle, Microbus and original Golf that had a decisive influence on Volkswagen's "design DNA". Of course, some of the Beetle's longstanding characteristics remain: these include its flared wings and the clean design of its rear lights, the shape of the bonnet, the side and door sills and – more than ever – its ability to integrate large wheels (up to 19 inch). A new feature is the rear spoiler that is homogeneously integrated in the design (standard for TSI engines with 118 kW / 160 PS and 147 kW / 200 PS); it aggressively maintains contact with the road on this Volkswagen, which has a top speed of up to 225 km/h, depending on the engine, and is available in the 3 equipment lines "Beetle", "Design" and "Sport". Incidentally, the top surface of the rear spoiler is always black, while its underside is painted in body colour.

Functionality – only Volkswagen with round headlights

Another aspect of Volkswagen's design DNA is that the car should not only look good, but it should also offer exceptionally good functionality. The 2 doors open wide, and they are not too long; this makes it easy to enter and exit the car even in tight parking spaces. Naturally, the Beetle is the only Volkswagen to be equipped with round headlights. Optional bi-xenon headlights are available for the first time; mercury-free xenon gas discharge lamps with a power consumption of 25 Watts per headlight are used for the projection module. When bi-xenon headlights are ordered, daytime running lights are also included, each of which consists of 15 LEDs arranged along the outer border of the headlight housing.

In the space where the original Beetle once had its engine, there is now a bootlid on the Beetle, which swivels upward – together with the rear windscreen – when it is opened, making space for ample luggage or lots of shopping (310 to 905 litres of cargo capacity). Located to the left and right of the bootlid are the rear lights. As on all Volkswagens, they exhibit an unmistakable night look (c-shaped). And as on every Beetle and New Beetle, their basic shapes are integrated in the design of the flared rear wings. The lights themselves are fully designed in dark red – except for 2 small white areas for the turn indicator and backup lights.

12 colours – for every one of life's feelings

3 equipment versions, 3 standard wheels, 3 characters: Volkswagen delivers the entry-level version of the Beetle – simply named "Beetle" – with 16-inch wheels whose covers look like aluminium wheels with their 6 dual spokes. The Beetle in the "Design" trim level drives out of the factory on standard 16-inch "Whirl" alloy wheels with 10 spokes. This wheel type is also offered as an option on the "Beetle" equipment line. Those choosing the "Sport" line, the most dynamic Beetle version, drives away on standard 17-inch "Spin" wheels. "Spin" has 5 distinctive spokes. This wheel is offered exclusively on the Beetle Sport.

Alternative wheels are available. These include the 17-inch "Rotor" alloy wheels (with 5 dual spokes) and "Circle". The "Circle" wheel is offered in 2 colour versions: in the "Circle White" version, the alloy wheel is painted white, while it is black in the "Circle Black" version; the wheel caps and trim rings of both wheels are always in chrome. "Rotor" and "Circle" wheels may be combined with any of the equipment line versions. Demonstrating how the distinctive Beetle has considerably more sports appeal than the previous model are its 18-inch wheels. Take the "Disc" wheel for example: here a large, shiny disc or stylised wheel cover is visually joined to 8 ribs of the rim flange. Also setting sporty accents is the new 18-inch "Twister" wheel (5 spokes, inside light aluminium, outside matt black). These two 18-inch wheels may also be ordered on any Beetle. However, this does not apply to the wheel innovation for this model series – the 19-inch "Tornado" wheel (5 dual spokes), which exclusively customises the Beetle Sport. 9 different wheels: that's a lot of wheels for such a new car. And yet, precisely such a wide diversity of customisation is typical of the Beetle programme.

Let's get to the point. In The Beetle, Volkswagen is building an automobile that is one of the safest in terms of both active and passive safety. Naturally, the ESP electronic stabilisation programme is standard, as is an effective network of front and side airbags that protects in the passenger compartment. Naturally, the car body – much of it laser-welded and galvanised – exhibits one of the best torsional rigidity values in the segment at 26,000 Nm/º. Naturally, because safety must be a fundamental quality in a car.

Notes:
TDI, TSI, DSG and Twincharger are registered trademarks of Volkswagen AG or other companies of the Volkswagen Group in Germany and other countries.
Features and technical data apply to models offered in Germany. They may differ in other countries.
All fuel economy and emissions data cited in this press release are forecast values as of June 2011.