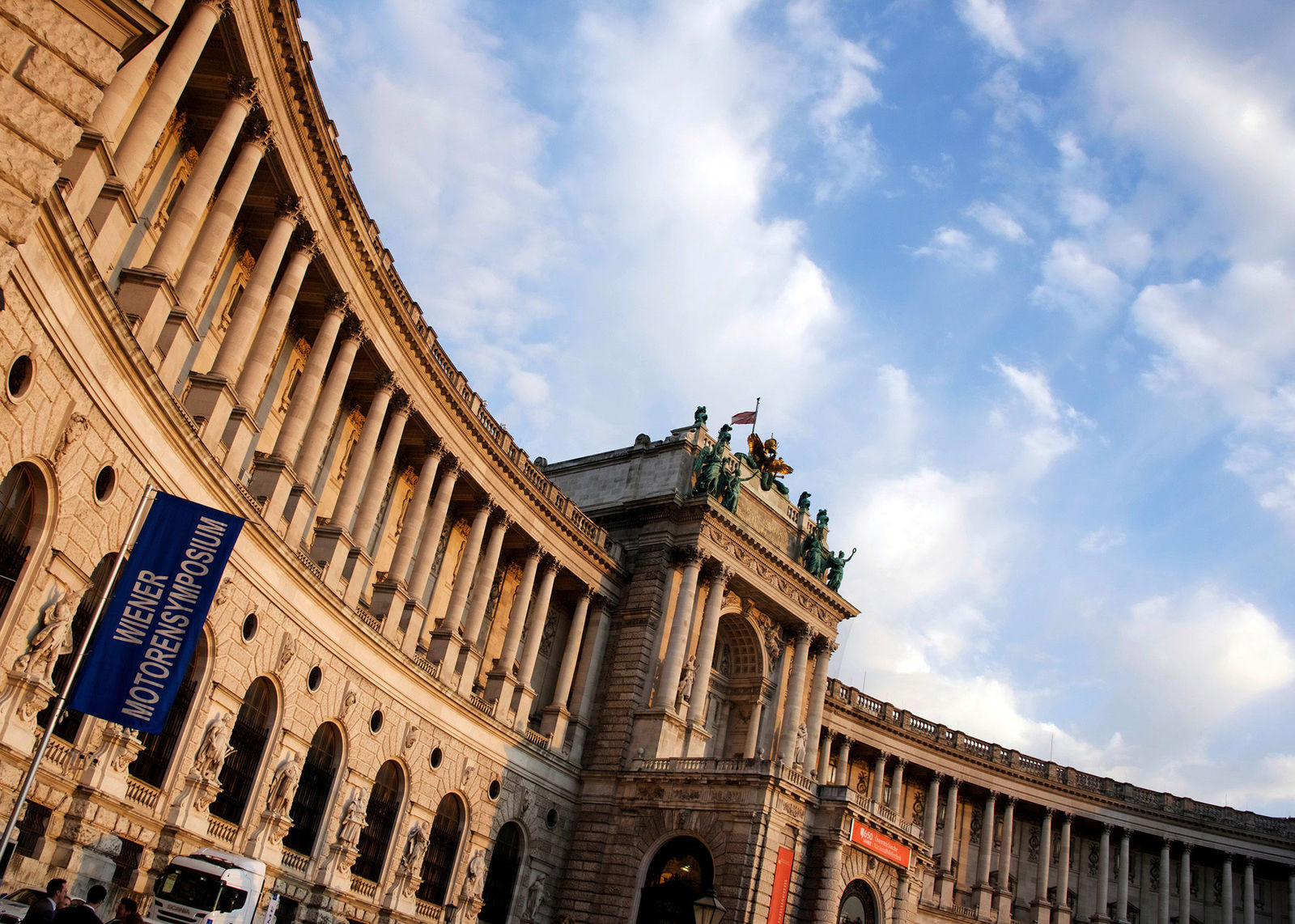 Every year, engineers from around the world meet at the Vienna Motor Symposium to discuss the future of mobility. Volkswagen sent a powerful message with the world premieres of the new 2.0-litre TDI family, the optimised CNG 1.5 TGI evo engine and a preview of the new 48V mild-hybrid in the next Golf.

One should not be fooled by the spectacular setting of the Vienna Hofburg. Where the last Hapsburg Kaiser walked the halls one hundred years ago, the future of mobility is being negotiated today. The Congress Center is the venue of the Vienna Motor Symposium, the world’s most important congress for powertrain technology. 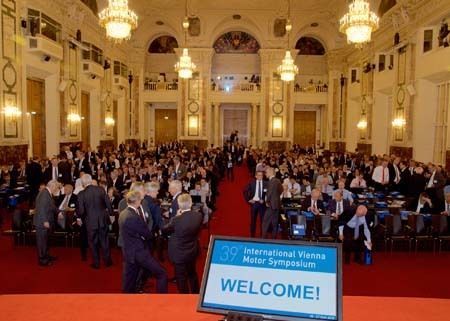 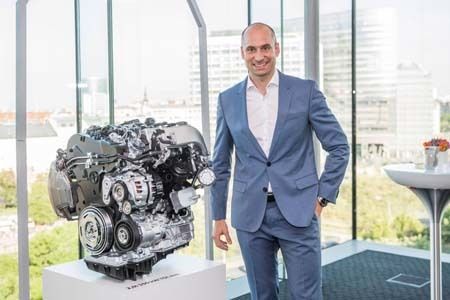 Sebastian Willmann with the EA 288 evo.

The 46 technical presentations represent the full spectrum of automotive research – from new technologies for diesel and petrol engines to innovations in electric powertrains to advances in research into fuel cells and future fuels.

World premiere of the new 2.0 TDI family
Volkswagen provided the first highlight of the presentation series with the world premiere of the EA 288. The 2.0 TDI is clearly the most important diesel engine in the Volkswagen Group. It has been massively redesigned in Wolfsburg, and now it is an impressive sign of life in diesel technology. Sebastian Willmann, Head of Diesel Development said, “The EA 288 was already very successful and offers an outstanding basis for further stages of evolution. We are proud that we were able to reduce emissions while simultaneously improving efficiency to enhance the driving experience.”

This required extensively redesigning the combustion chambers, crankshaft, turbocharger and exhaust gas treatment. The new aluminium crankcase reduces the weight by 20 kg. This generation of the engine fulfils the requirements for the current exhaust emissions standard Euro 6d-temp and is already equipped for the next stage, Euro 6d. The CO2 emissions could be reduced by up to 10 g/km while simultaneously increasing the power-output and torque values by up to nine percent.

The 12V starter-alternator plays a crucial role in achieving these results. It will transform the TDI into a mild hybrid in the future. The regenerative energy serves as an electric booster during acceleration. The starter’s belt drive will also make the start-stop behaviour more comfortable. A coasting function with the engine shut off promises to reduce fuel consumption.

The production will also be more efficient: all versions of the new engine generation will have a uniform displacement of two litres, although two performance classes were defined (PC1 up to 120 kW and PC2 up to 150 kW), which differ in pistons, crankshaft group and turbocharging. Of course, the EA 288 evo can be fitted both longitudinally and transversely.

Natural-gas boom with high-tech
CNG (Compressed Natural Gas) is one of the quiet resources which must be increased as part of the mobility transformation. Due to the higher proportion of hydrogen, combustion is virtually free of particulate matter. In addition, approximately 20% less CO2 in comparison to diesel or petrol is generated during combustion. And CNG can even be considered to be CO2 neutral if it has been produced using renewable energy sources like wind, water or solar energy. Audi has already demonstrated the practical implementation in an industrial-scale pilot project. 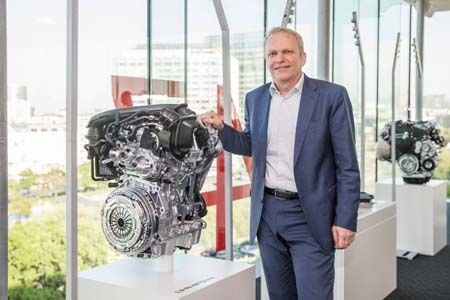 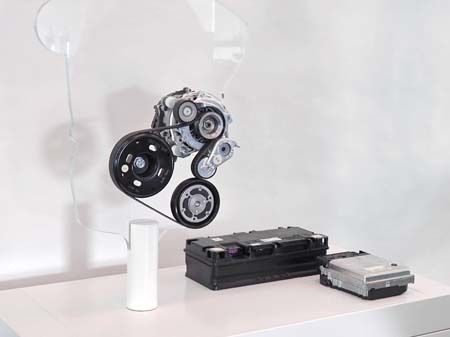 The physical advantages are still countered with prejudices. But slowly things are beginning to move on the technically logical issue of the environment. According to the German Motor Transport Authority (KBA), the registration of CNG cars grew 430% in the first quarter of 2018 as compared to the previous year.

Engines like the 1.5 TGI evo presented in Vienna will certainly contribute to the continuation of this success. The engine is based on the 1.5 TSI ACT BlueMotion, which offers the ideal basis for CNG operation due to the Miller combustion process and the high-tech turbocharger with variable turbine geometry. Compressed natural gas has a higher octane rating (130 RON vs. 95 RON for Super), so the engine can be operated with very high compression, which improves the efficiency. Numerous components optimised for CNG operation further improve the efficiency. The 1.5 TGI will have its premiere in the current Golf. A third gas tank will extend the CNG driving range to 490 km.

Dr Wolfgang Demmelbauer-Ebner, Head of Petrol Engine Development said, “We are extremely satisfied with the current CNG sales figures, which we will certainly be able to increase with the ultra-modern Golf 1.5 TGI. The next steps will be to enlighten the public and promote the optimisation of the filling-station network.”

The next Golf with an upper-class hybrid
Forty-eight-volt technology has been a hot issue at the Vienna Motor Symposium for several years now. This mild-hybrid variant promises simultaneously improved performance, more comfortable propulsion, greater regeneration and lower fuel consumption. Due to the high costs, this technology was previously restricted to upper-class models.

The congress now offered the perfect stage to announce that Volkswagen would make 48V technology affordable for the general public for the first time in the next Golf.

This is actually a logical step, because democratising upper-class technology has been a firm component of the Golf’s success story for decades.

The intelligent coexistence of systems
Volkswagen presented itself at the Motor Symposium as a manufacturer which is equipped for all versions of future mobility which cannot be foreseen today. Professor Hans Peter Lenz, founder and patron of the event, summed up the current situation with the words, “The race is still on!” 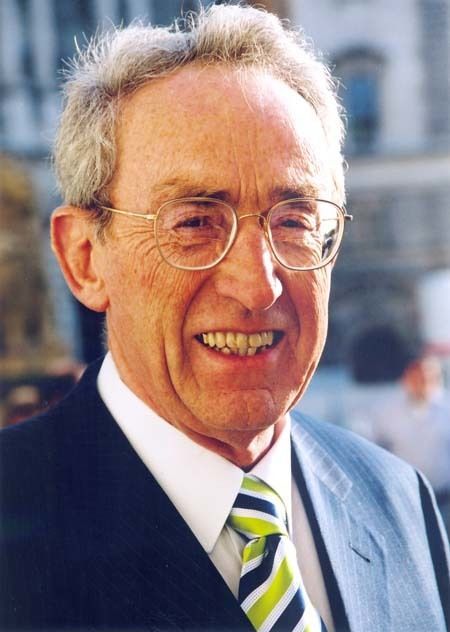 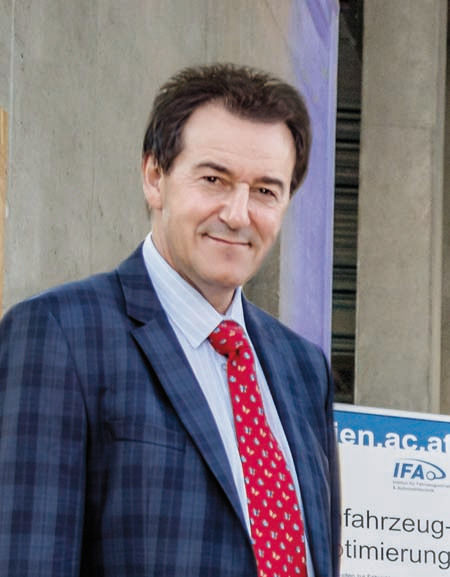 The Chairman in emeritus of the Institute for Powertrains and Automotive Technology at the Vienna University of Technology referred to the advantages and disadvantages of the various systems, which are currently not treated equally in public debate. He emphasised that combustion engines still have a great deal of potential, which is presently being realised with an enormous effort, to keep these systems suitable for the future. The EA 288 evo can also serve in this respect as a good example.

For in spite of all the optimism about electric powertrains, one thing must not be overlooked: even if 30% of all vehicles produced in the foreseeable future have electric powertrains, 70% will still be equipped with engines using conventional technology – and they must be made as clean and efficient as possible.

Professor Bernhard Geringer, Lenz’s successor at the Vienna University of Technology, spoke of a “mammoth task” for the engineers, which will ultimately lead to positive results.

“Competition invigorates innovation, which ultimately benefits consumers and society. The transformation in automotive technology will remain exciting.” The experts at the Vienna Motor Symposium do not expect competition among the systems but rather the realisation of the intelligent coexistence of systems in which the most appropriate powertrain is used for each respective purpose. 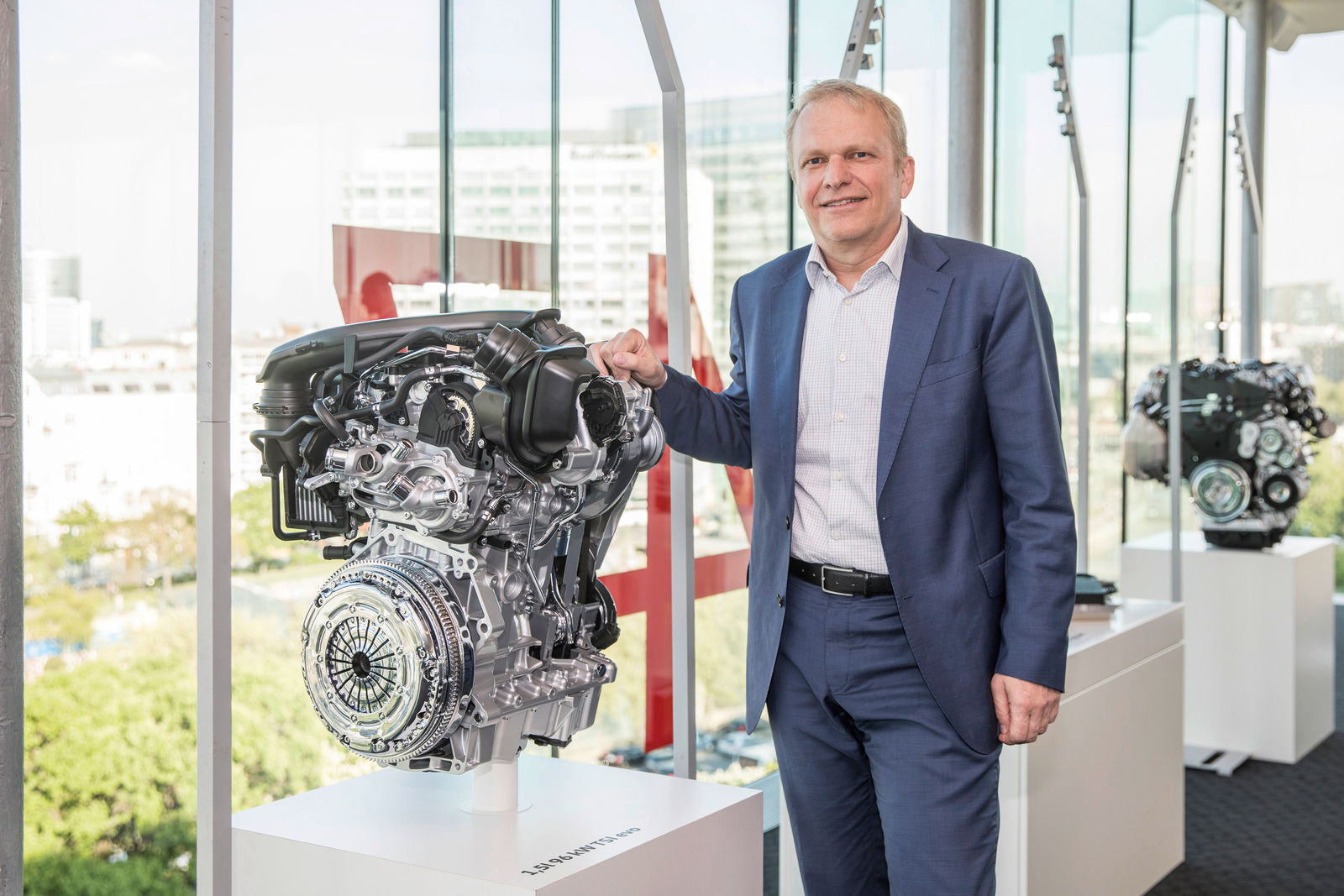 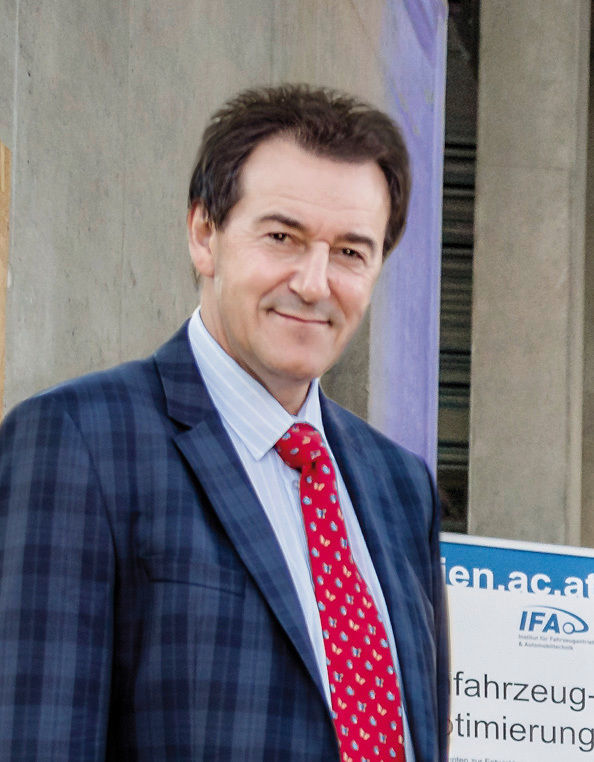 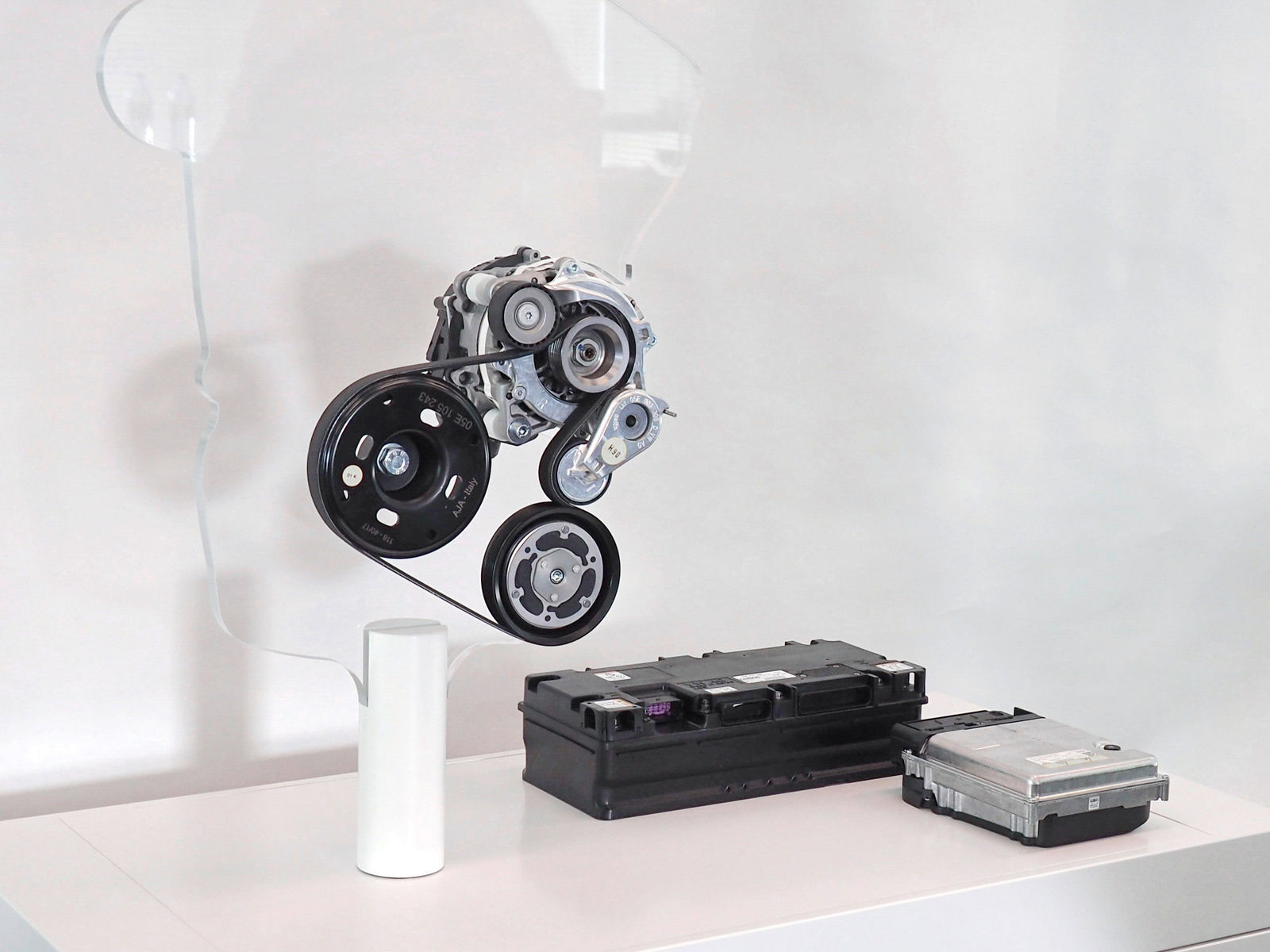 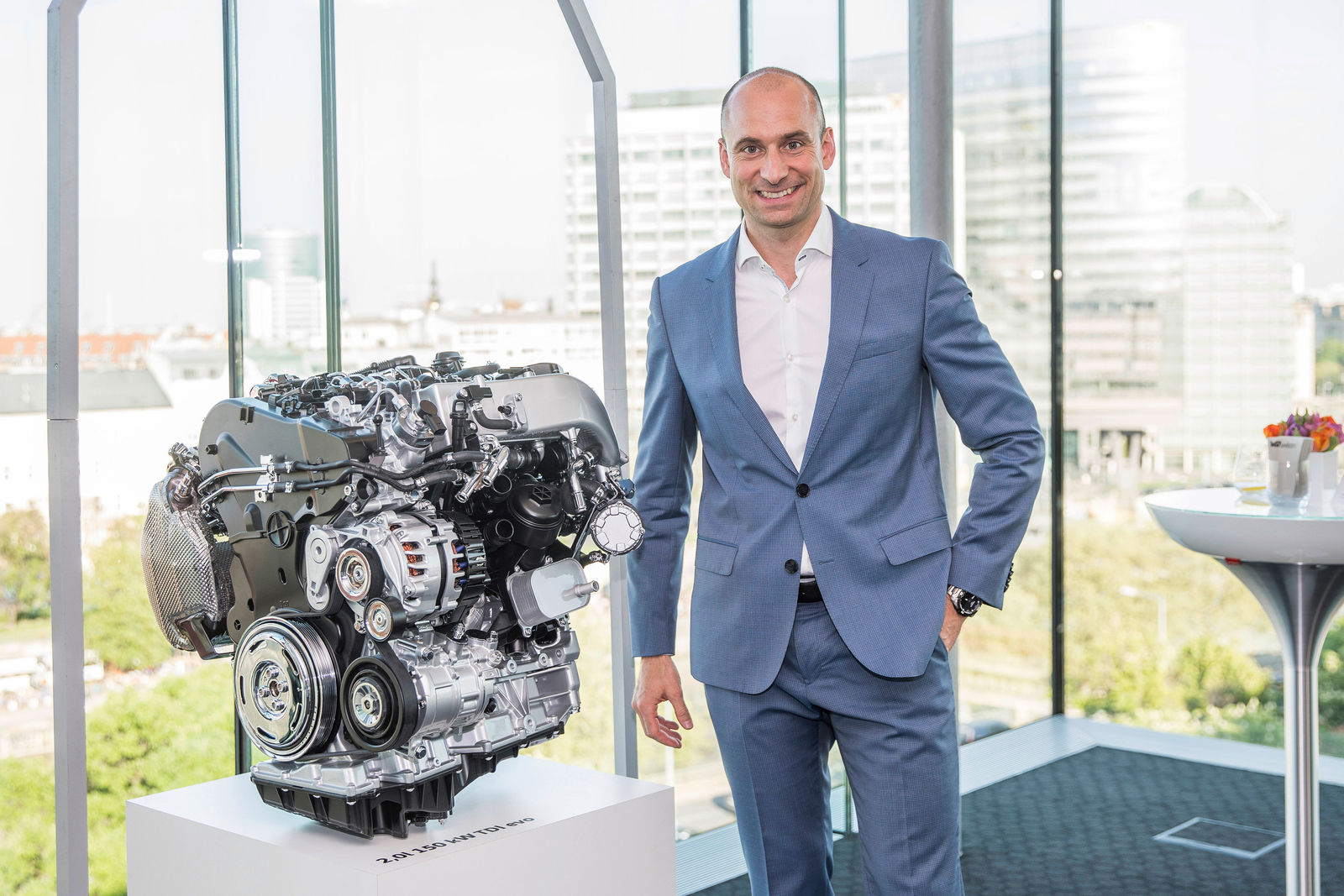 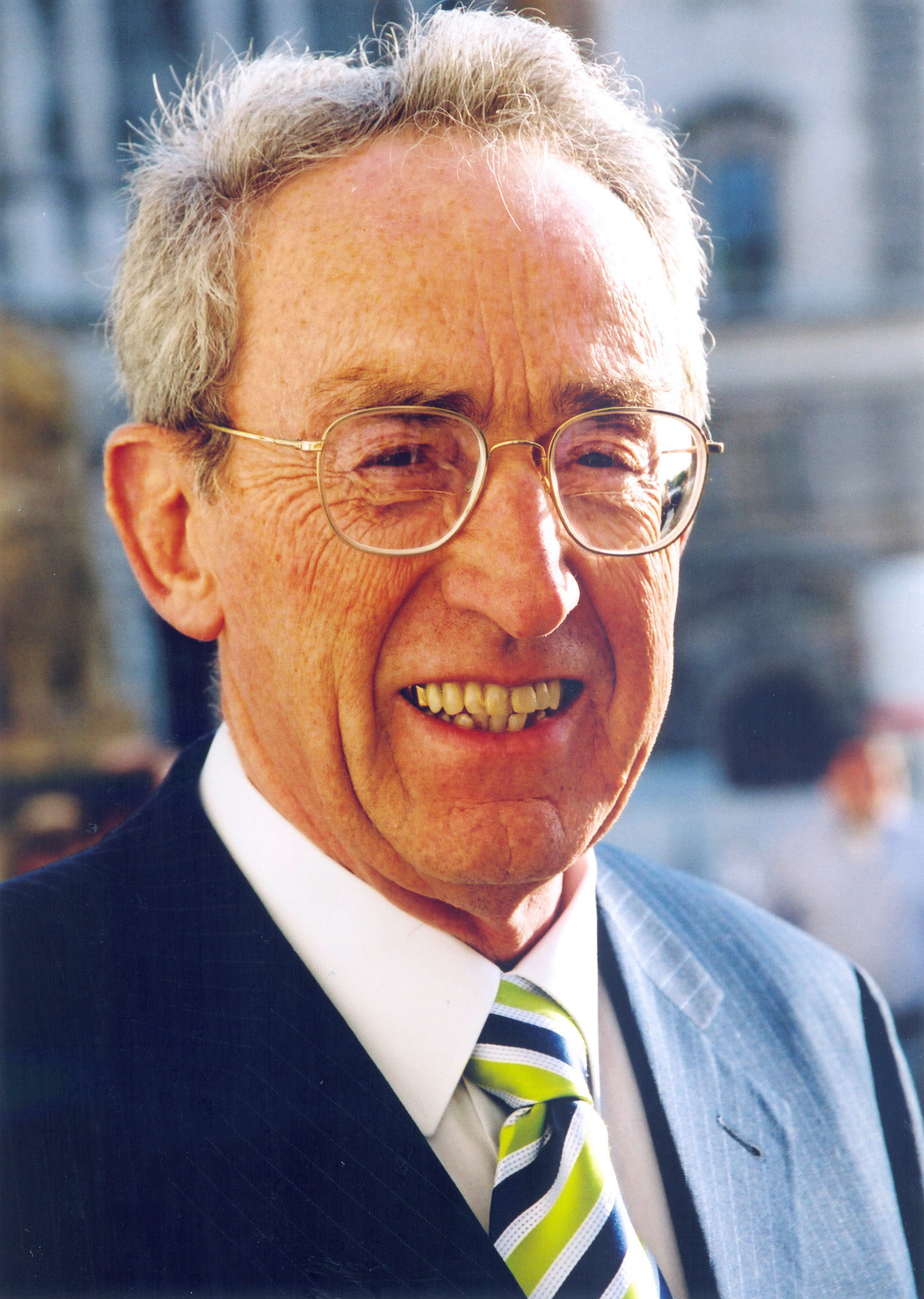 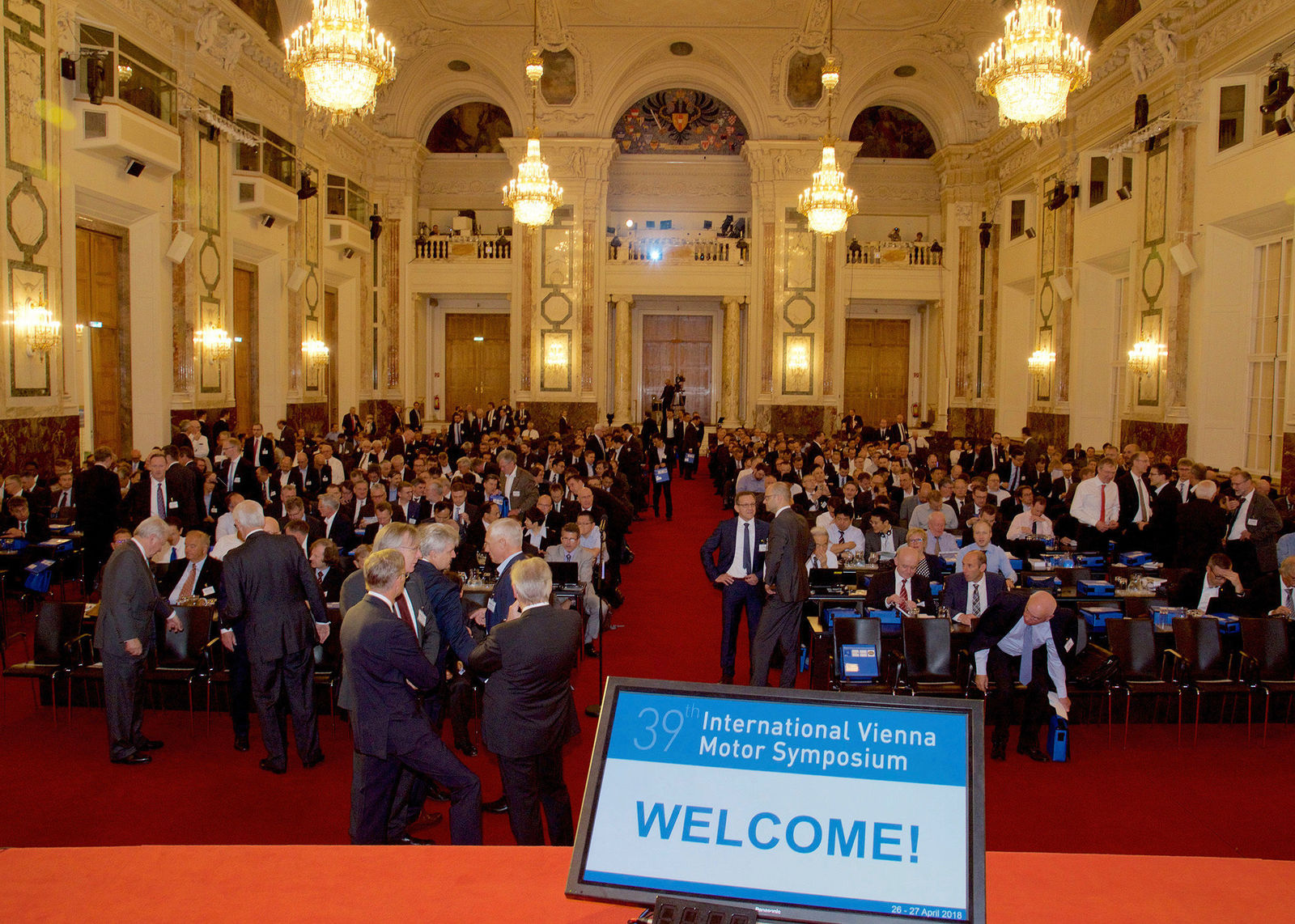