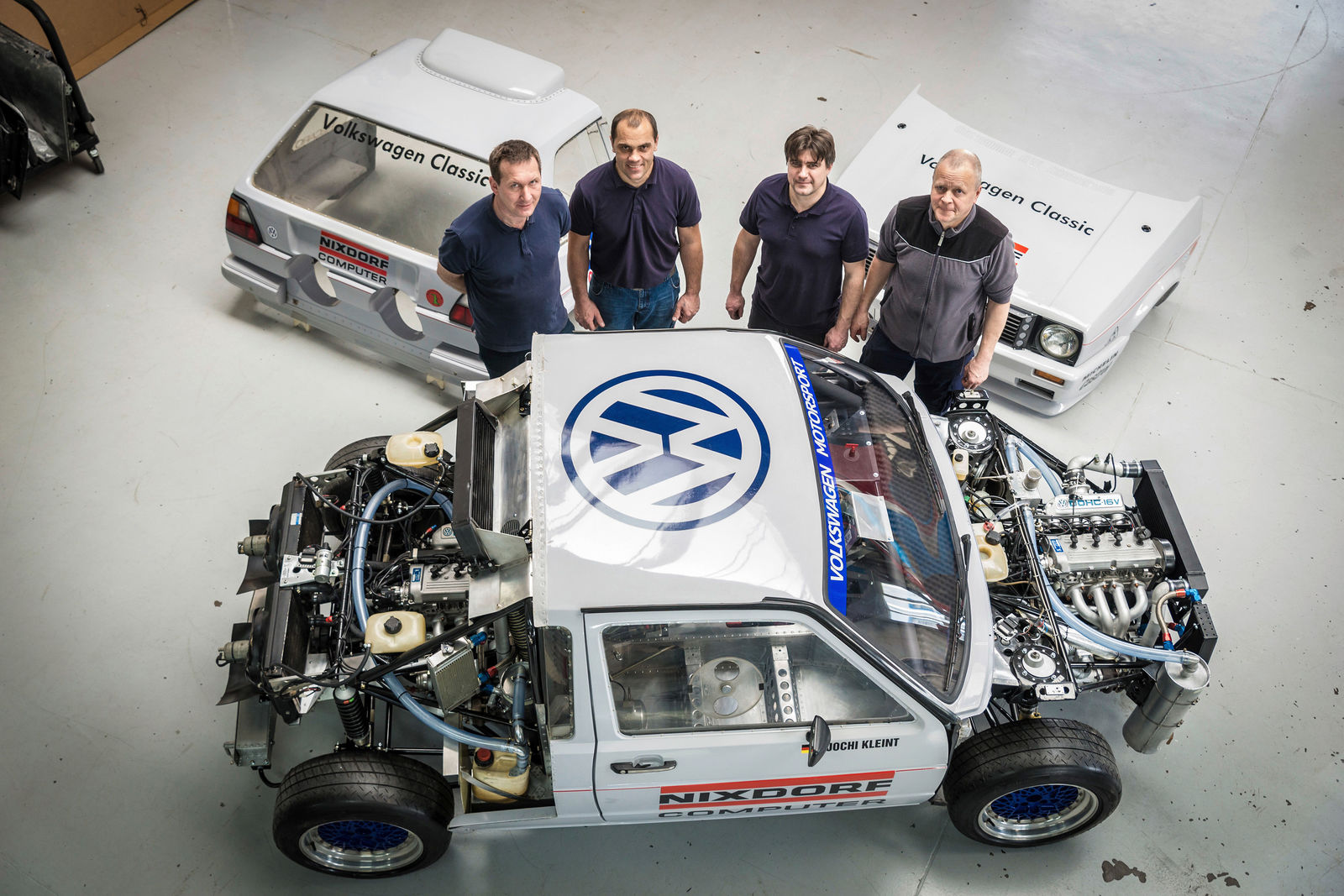 Volkswagen last took on the world’s most difficult mountain race at Pikes Peak with a Golf II equipped with two engines in 1987. This “Race to the Clouds” demanded exceptional levels of courage, which both driver Jochi Kleint and Volkswagen and design engineer legend Kurt Bergmann were able to demonstrate with the impressive performance of the twin-engined Golf II. Now, after more than 30 years, Volkswagen is presenting this freshly technically restored piece of motorsport history from 1987 just in time for a renewed attack on Pikes Peak. 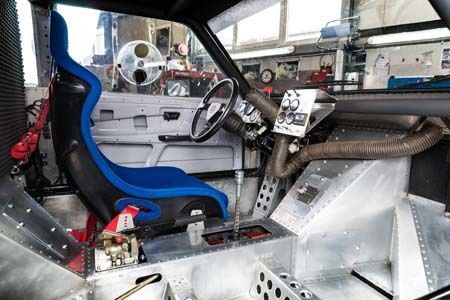 Archive
Despite its two engines, the stripped out Golf II weighed only 1,020 kg, with many other components having been sacrificed. Fresh air, for example, is supplied by a simple pipe. 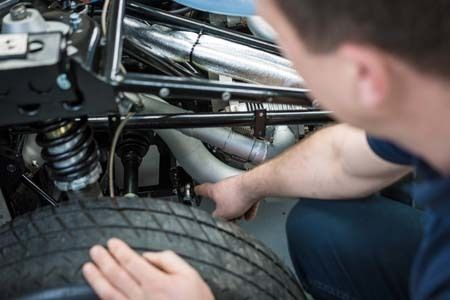 Archive
The ill-fated swivel joint: a crack leading from a hole for the lubrication nipple crippled the Golf shortly before the finish line.

With the sound of metal on metal, the door of the by now 31-year-old twin-engined Golf II is unlocked. The smell of the car’s interior is reminiscent of model glue, and of a childhood spent gluing model aeroplanes together. But a brief glance at the seat shell and the countless switches and displays is enough to show that this is a different world altogether. Not a model toy, but a tool, built for one specific purpose: being the fastest and first to cross the finish line at the summit of the legendary Pikes Peak.

Inevitably, images from 1987 flit past my mind’s eye, mixed with the unmistakable roar of the two four-cylinder engines being pushed to their limit and the typical hiss of the turbocharger. The day dream brings me out in goosebumps: sitting in the driver’s cab, where Jochi Kleint sat in 1987, and racing the Golf along a gravel track. The voice of head mechanic Jörg Rauchmaul brings me back to reality.

The Pikes Peak Bergmann beast
Rauchmaul is responsible for coordinating the restoration of this unique Golf on behalf of Volkswagen, a task which led him to design engineer legend Kurt Bergmann. “Of all of the cars that Bergmann developed, the 1987 Pikes Peak Golf II was easily the most radical upgrade. It’s an absolute miracle that Bergmann and his team were able to develop and build such a beast in only six months,” added Rauchmaul, visibly impressed. 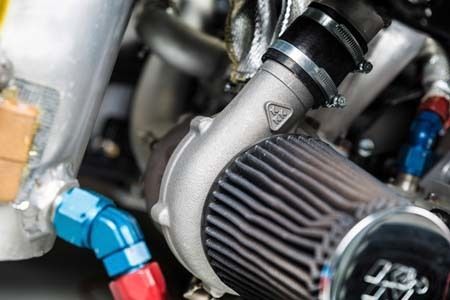 Archive
Pressure charging: each engine is equipped with a large KKK turbocharger, which pushes cooled charge air into the 4-cylinder, 16-valve engines at a pressure of 1.6 bar. 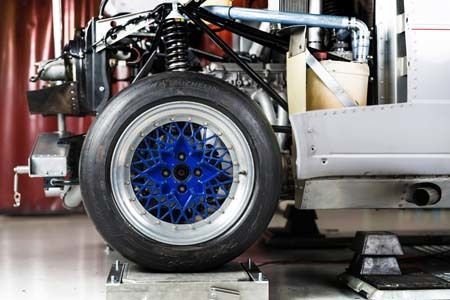 Archive
A larger proportion of magnesium in comparison to the standard wheels reduces not only weight but also durability. The wheel becomes brittle sooner.

Thanks to the 1.6 bar of charge pressure provided by the KKK turbocharger fitted in both engines, the two 1.8 litre engines from the 16-valve Golf II GTI are capable of producing a maximum of 480 kW (652 PS) – and all of that at a fighting weight of just 1,020 kilogram. As both engines are also equipped with their own Hewland racing transmission, the Golf can be driven with four-wheel drive, or with solely front-wheel or rear-wheel drive. “This unique vehicle is historically irreplaceable, and getting it back onto its wheels has been real honour,” claimed Rauchmaul proudly. The enormous potential of the twin-engined Golf II was impressively demonstrated by Jochi Kleint at Pikes Peak when he achieved the fourth best training time having driven with only one of the engines.

A fragile masterpiece
During the race, Kleint and his twin-engined Golf maintained a promising position, and seemed set to achieve the fastest time until just before the finish line. The shock for the Volkswagen team came only a few curves before the finish, when Jochi Klein was forced to stop the by then uncontrollable vehicle. The small hole drilled for the lubrication nipple on the swivel joint was to blame – a crack had formed there, and had led to the breakage of the joint.

Rauchmaul’s team is approaching the restoration of the twin-engined Golf with great respect, as well as the following premise: “We want to retain as much of the vehicle’s original condition as possible – after all, this unique race car is absolutely steeped in history. We’re just refurbishing the technology and making the car roadworthy again,” explained Jörg Rauchmaul. 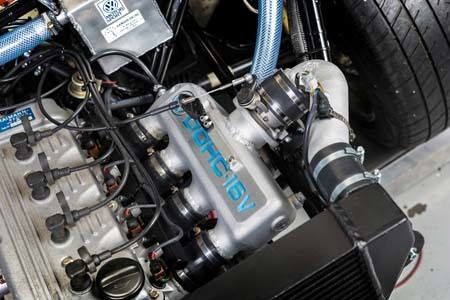 Archive
Detailed work with a big impact: the changed intake manifold optimises the flow of fresh air compressed by the turbocharger. 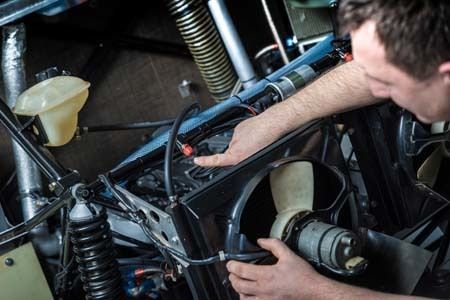 The upgrade reveals a few peculiarities
Even before work on the restoration had begun, Jörg Rachmaul recognised that he would only be able to receive detailed information from the design engineer: “Even though the Pikes Peak Golf II has a similar build to the series production vehicles, we had to contact Kurt Bergmann directly in Vienna to ask for important information and data relating to the technology,” said Rauchmaul. The extremely high thermal loads involved in racing had badly affected the 30-year-old Golf. Rauchmaul pointed to the rear of the vehicle and explained that “that all had to come out. And since some of the rubber parts were made to measure, we struggled with extremely long delivery times.” The twin-hearted Golf had also set a few traps that were not immediately visible. For example, the safety-relevant foam cladding in the tank had disintegrated, and managed to land in the fuel supply system when attempts were made to start the vehicle. “That would have meant certain death for the specially adapted DIGIFANT fuel injection system,” noted the head mechanic, before going on to add that “for the most part, we’re familiar with the technology from the series production Golf, we just have to refamiliarise ourselves with a few things first. This not only demands our absolute concentration, but also a decent dose of passion and experience.”

The tamed Golf in sheep’s clothing
The final works carried out on the two engines demanded real finesse. “They have to be tuned to each other in such a way, that they work synchronously to provide power, otherwise the vehicle will be unstable and impossible to control on asphalt,” explained Rauchmaul. He’s aiming for the engines to each be tuned to between 177 and 191 kW (240 to 260 PS) when work is complete, and seems confident that this can be achieved: “The Golf should be reliable and fast, but also durable. That’s why we won’t be pushing the engines to their limit, that would be a crime.” Nevertheless, the radiator sprinkler system designed for extreme situations and the two temperature-controlled fans in the relatively small radiators in the rear will have to function flawlessly. 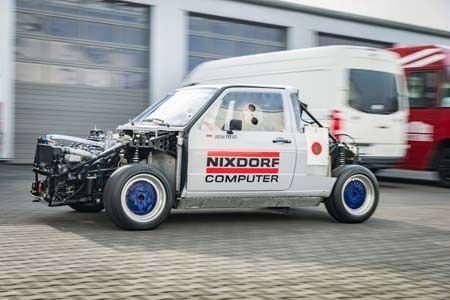 Archive
Test circuit: once the engines have been roughly calibrated, the restoration team are unable to resist a short test drive. 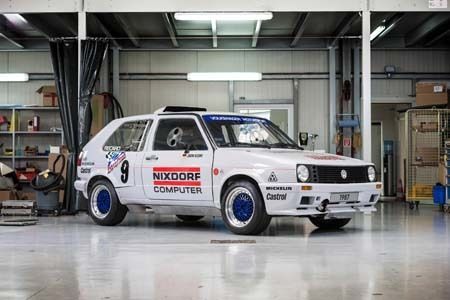 This sophisticated engine cooling system is absolutely necessary, particularly in view of the planned races involving overall output of “only” approximately 368 kW (500 PS). And with temperatures of over 60 degrees Celsius being recorded during racing, it seemed that it wasn’t only in the driver’s cab that all hell had broken loose. The rear of the engine room was also suffering under critical temperatures thanks to the Golf’s dutiful bodywork, which had not been optimised due to reasons associated with aerodynamics. However, design engineer Bergmann was able to tackle the problem of the extreme temperatures with an ingeniously simple trick. As soon as a critical temperature was reached, the radiator sprinkler system would spray water from two little nozzles onto the small radiators. “Yet another example of the ingenious pragmatism of Kurt Bergmann,” laughed Jörg Rauchmal, visibly impressed. 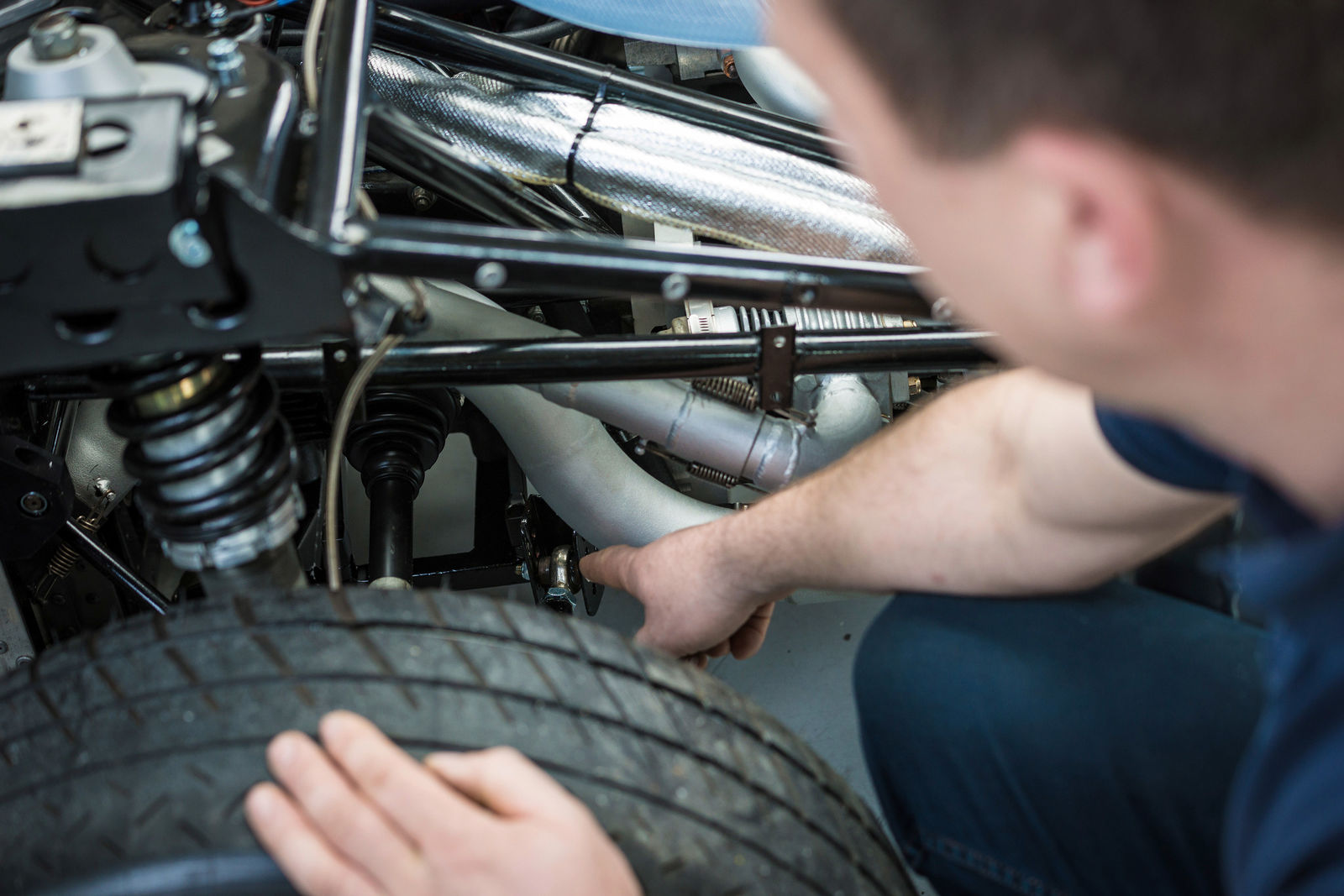 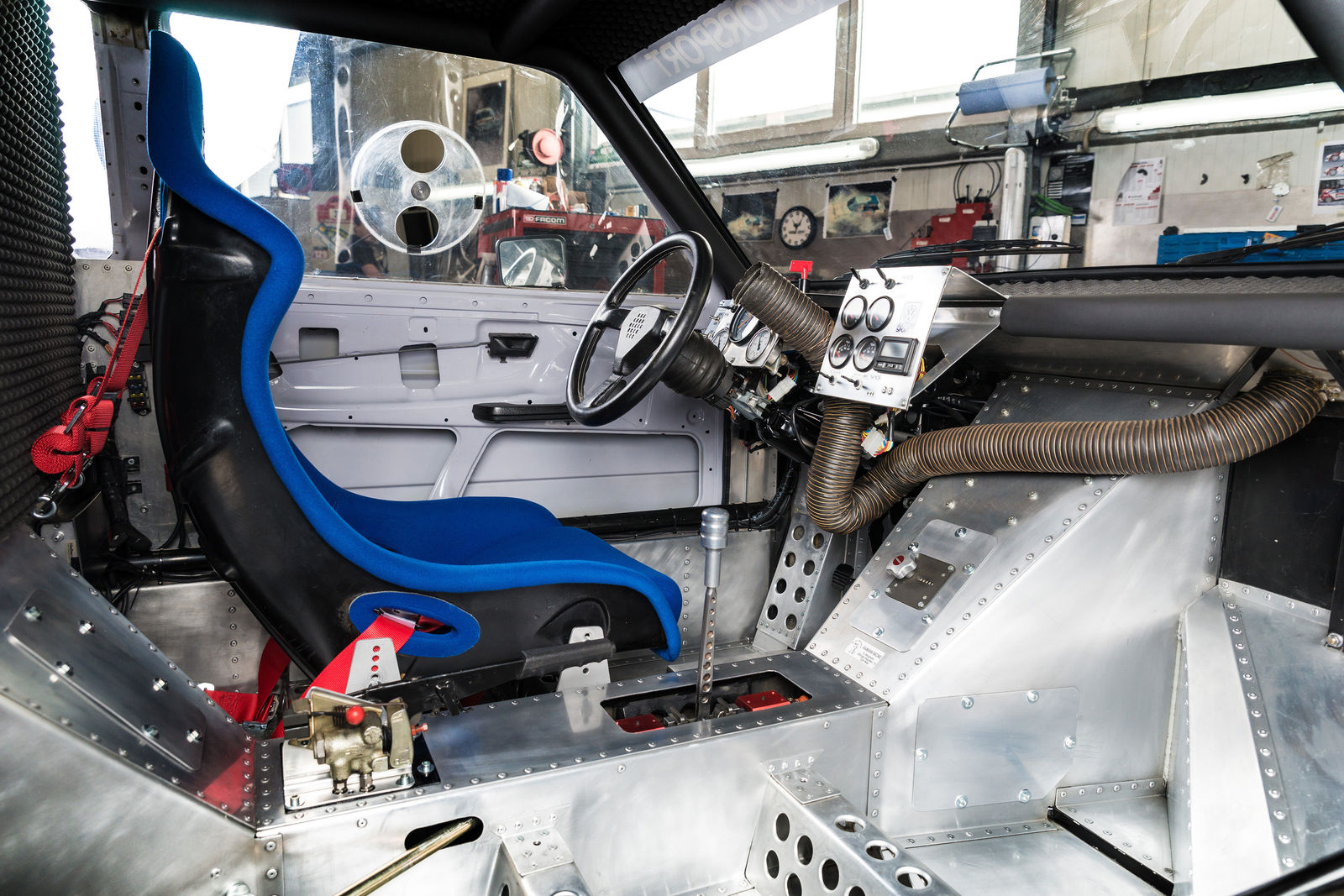 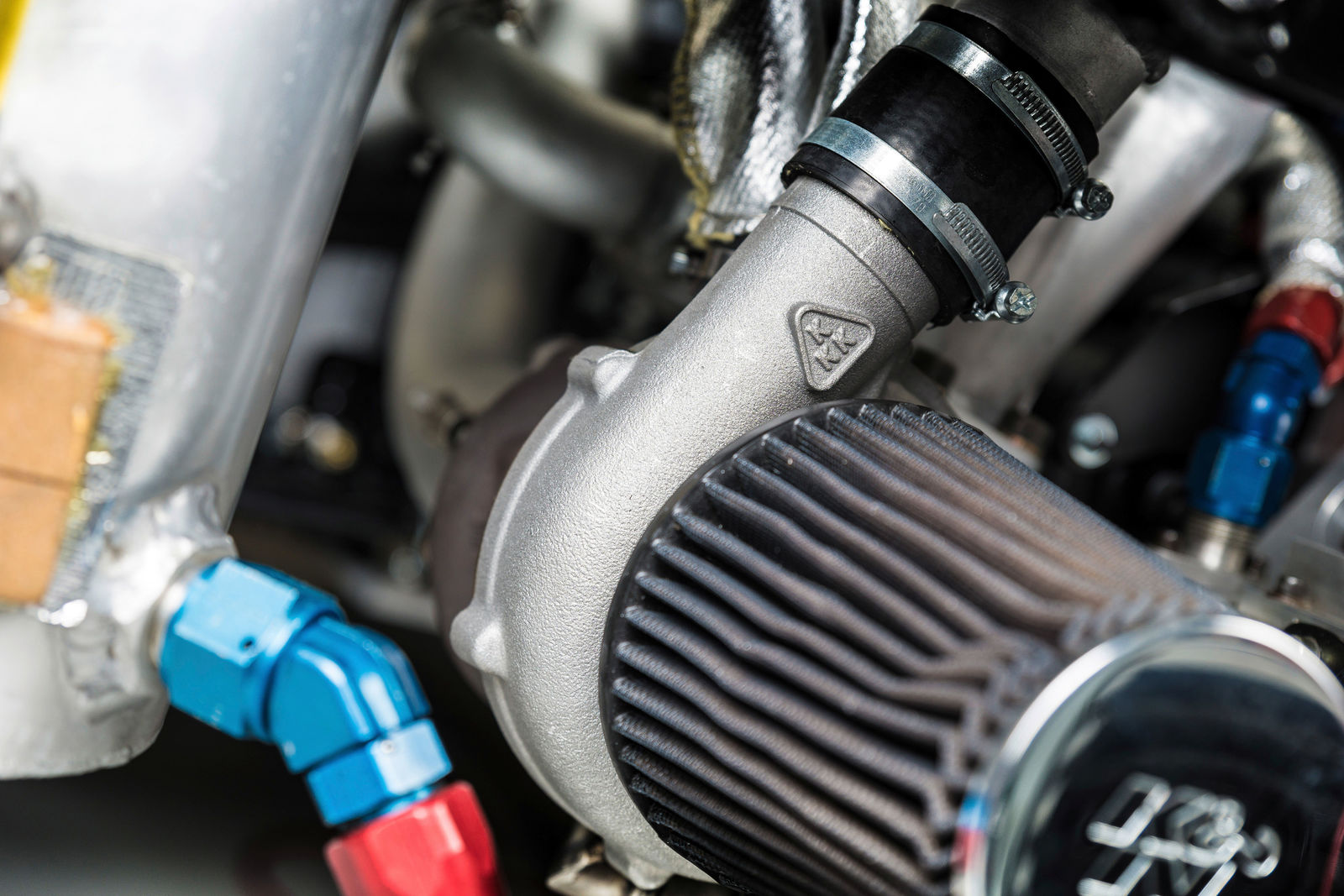 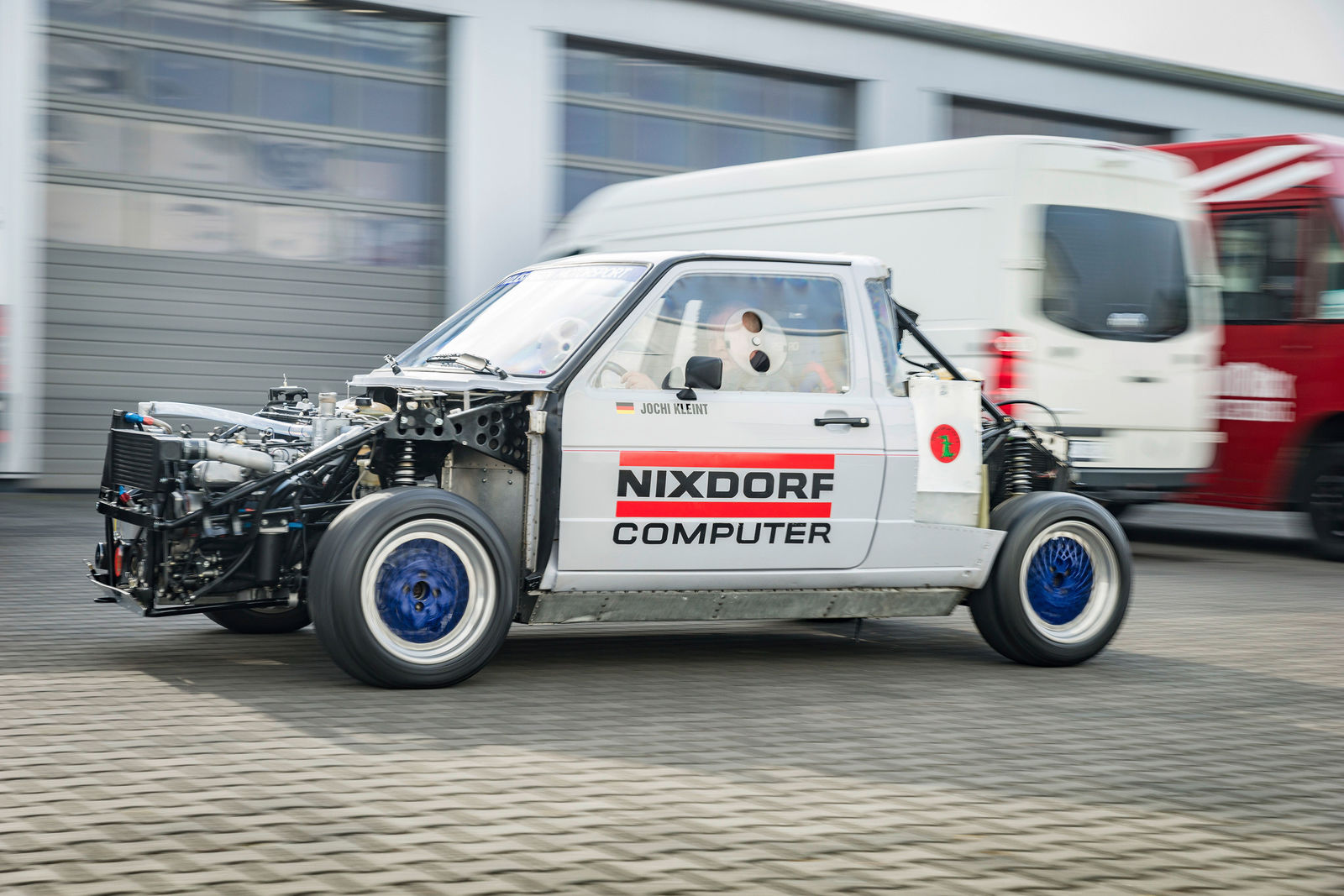 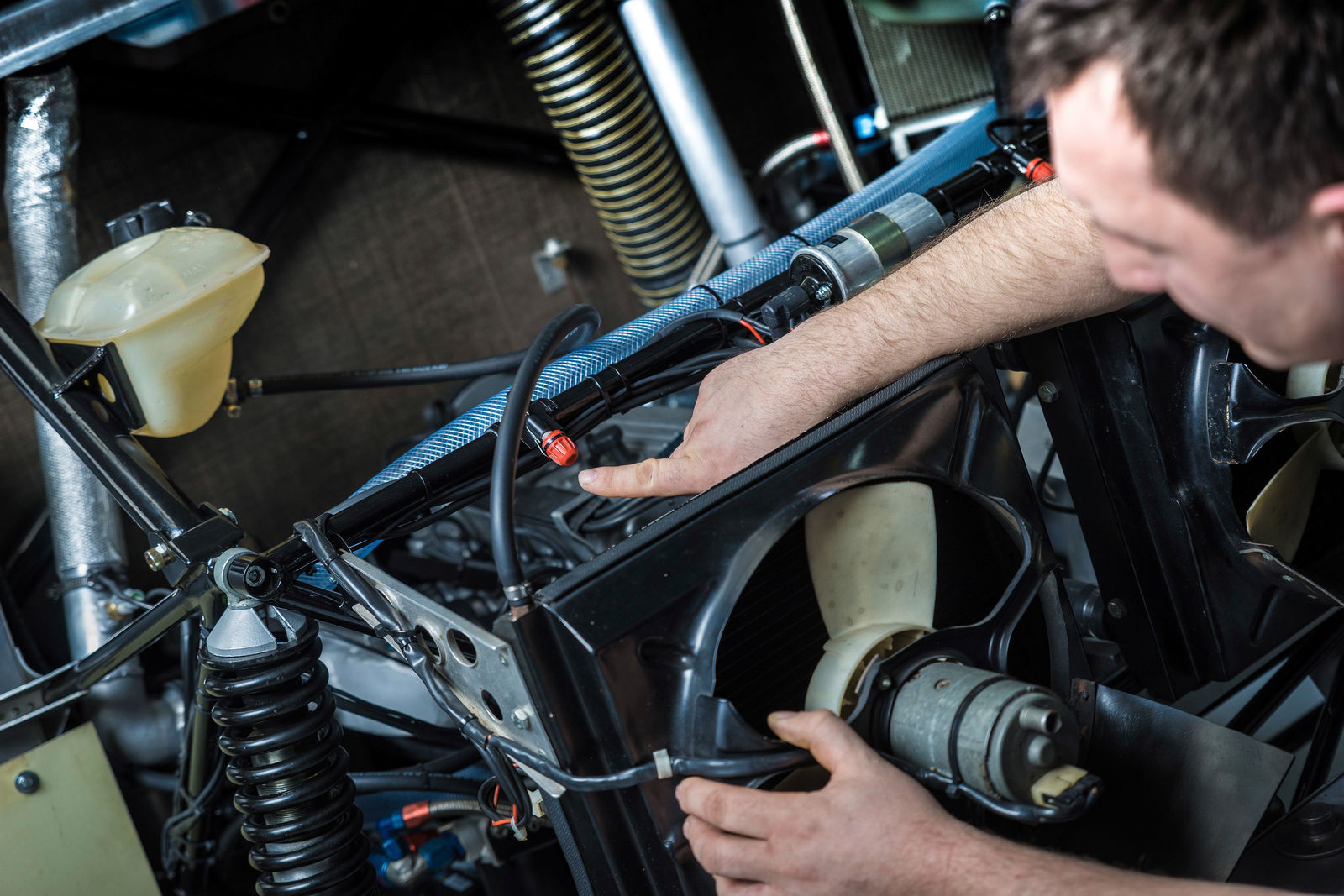 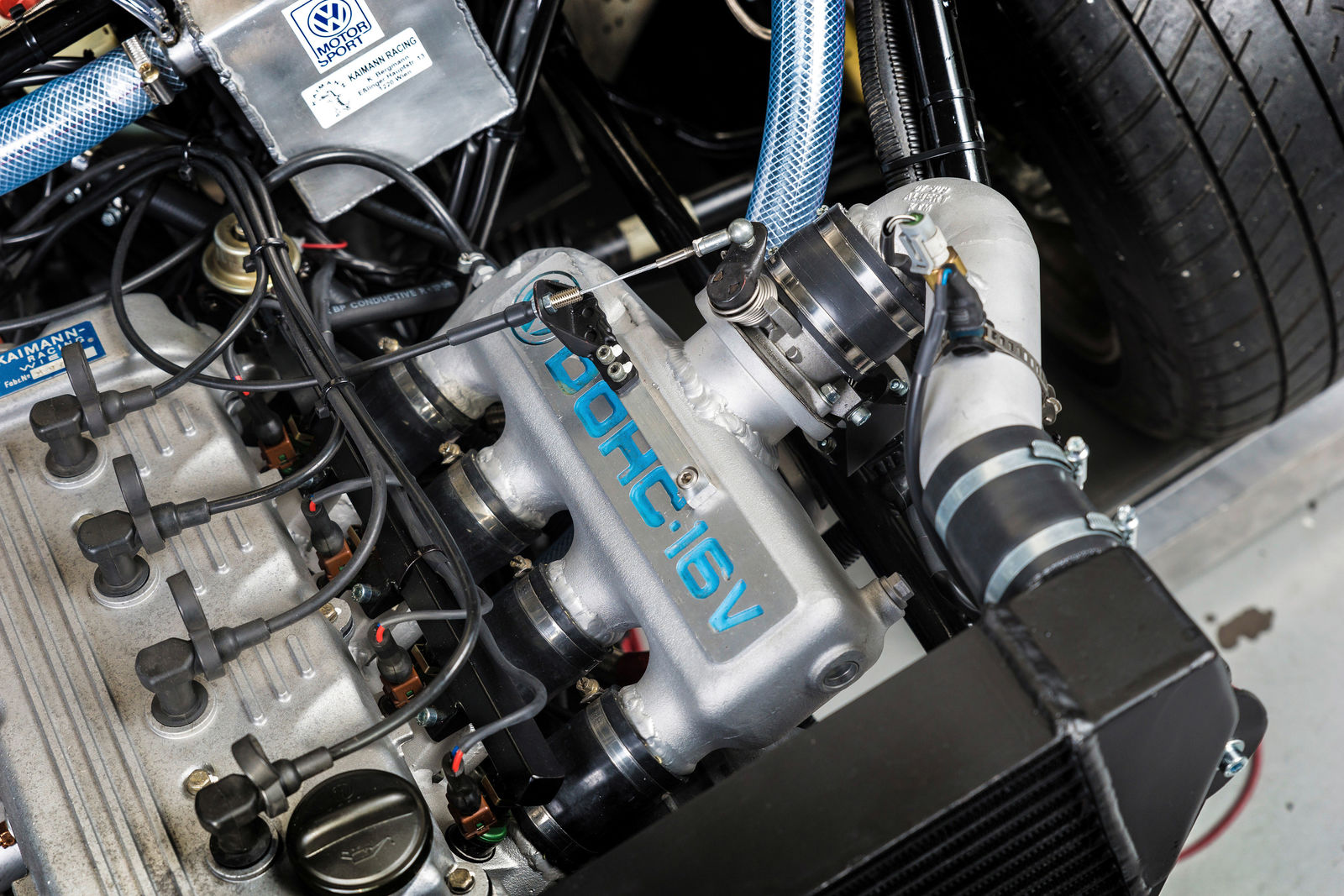 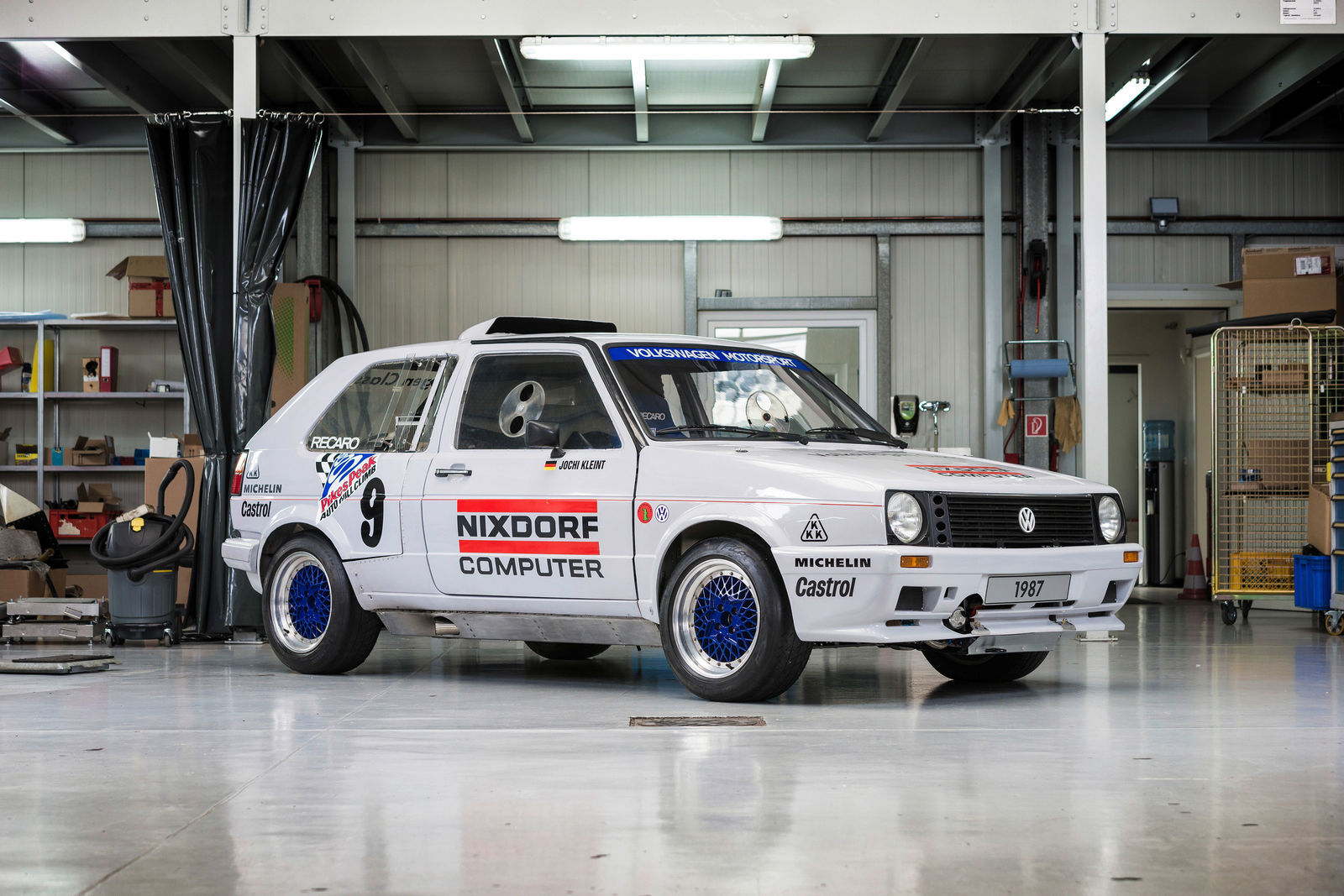 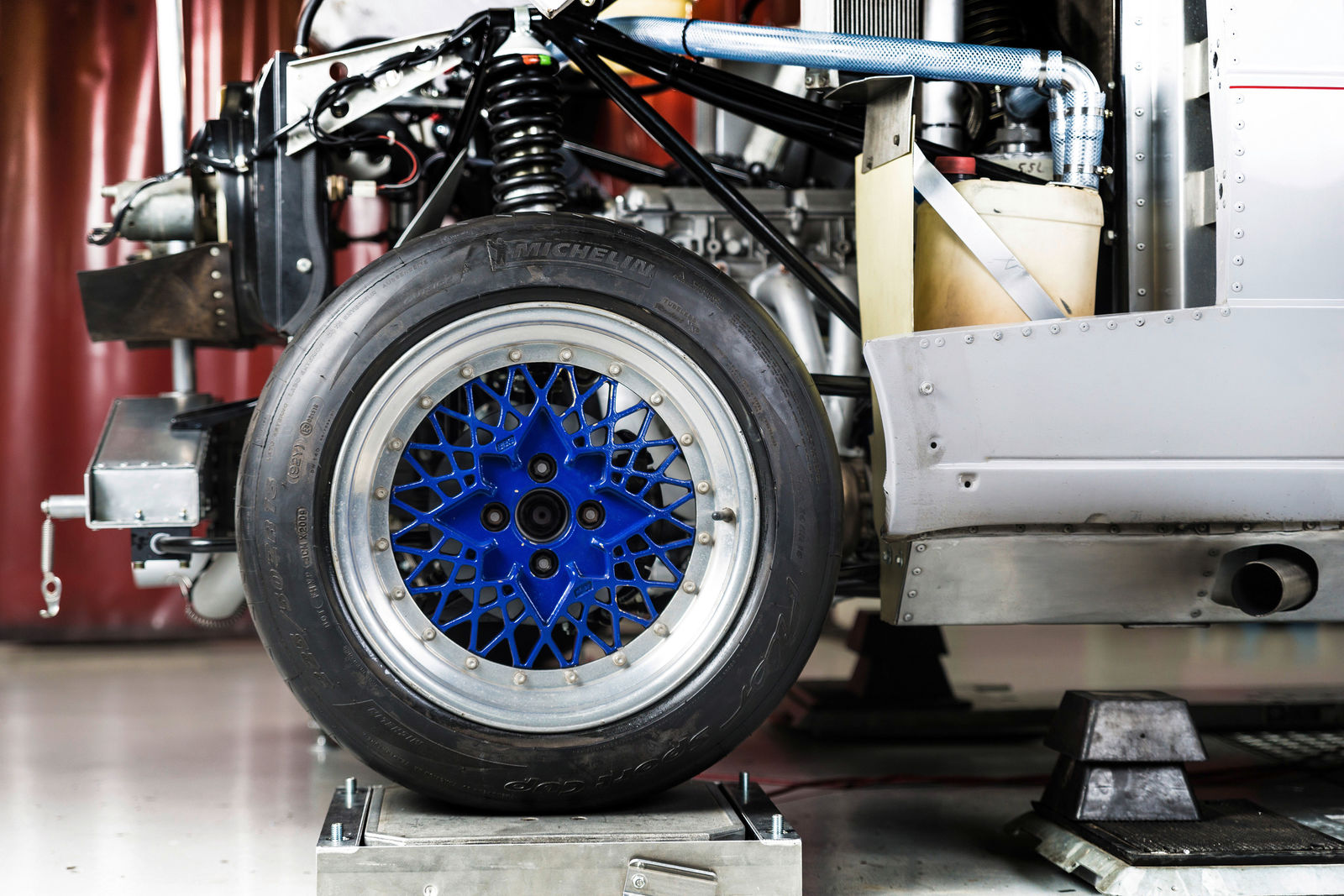