The future begins in Los Angeles

With the “Building an Electric Future” exhibition, Volkswagen and the Petersen Automotive Museum in Los Angeles are offering an insight into the development of the mobility of tomorrow. 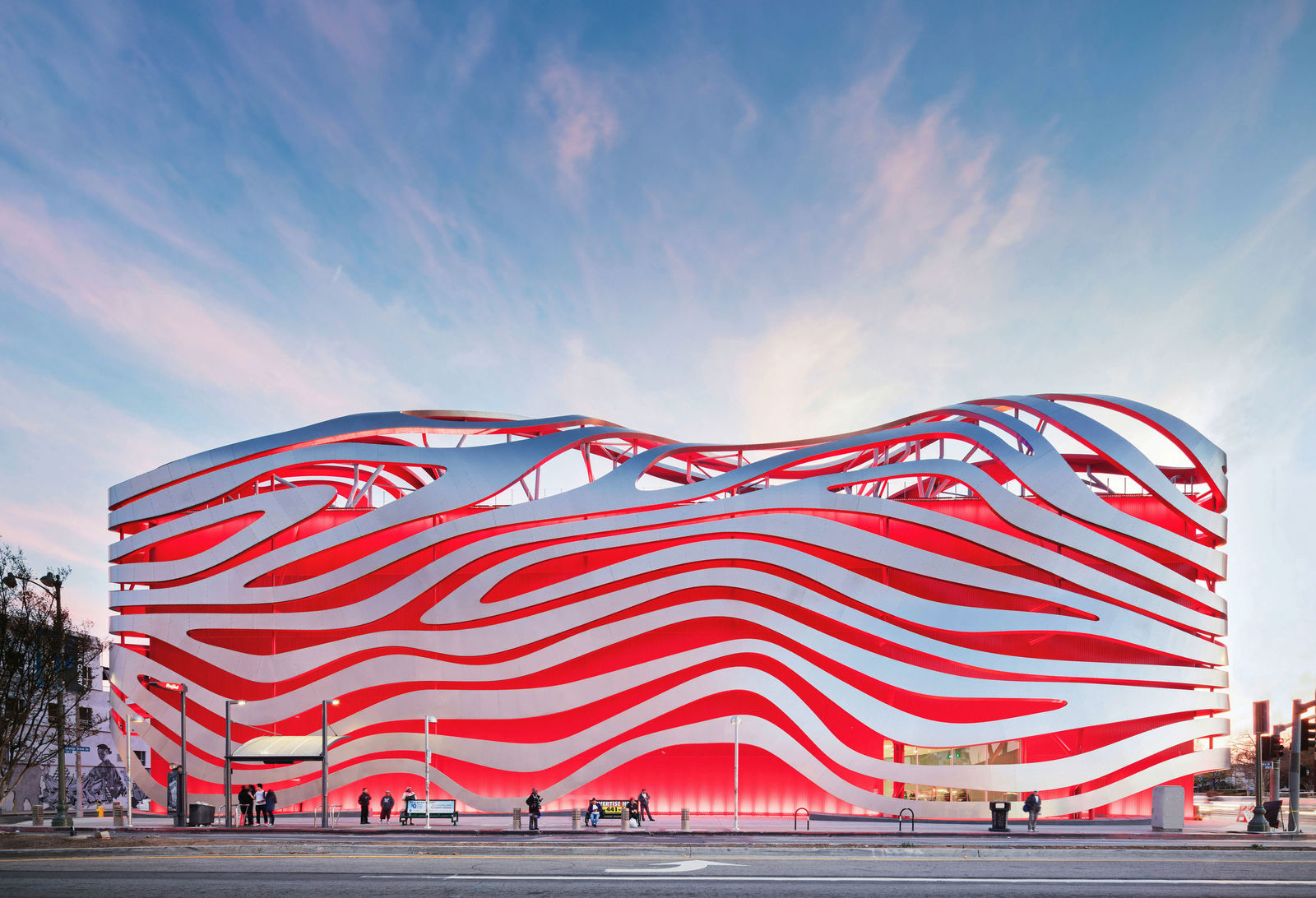 The Petersen Museum in L.A. is a design icon.

What a backdrop: Even from the outside, the Petersen Automotive Museum in Los Angeles (USA) is a thing of beauty. A flowing design, consisting of 308 stainless steel bands, wraps around the bright red building. This makes it a perfect location for the launch of the new Volkswagen ID. SPACE VIZZION, which was unveiled to the public here in November 2019. The seventh concept car in the ID. family offers an innovative insight into the new era of mobility at Volkswagen. Visitors to the Petersen Automotive Museum can discover how this exciting process is developing and where it is leading in the new exhibition “Building an electric Future”. 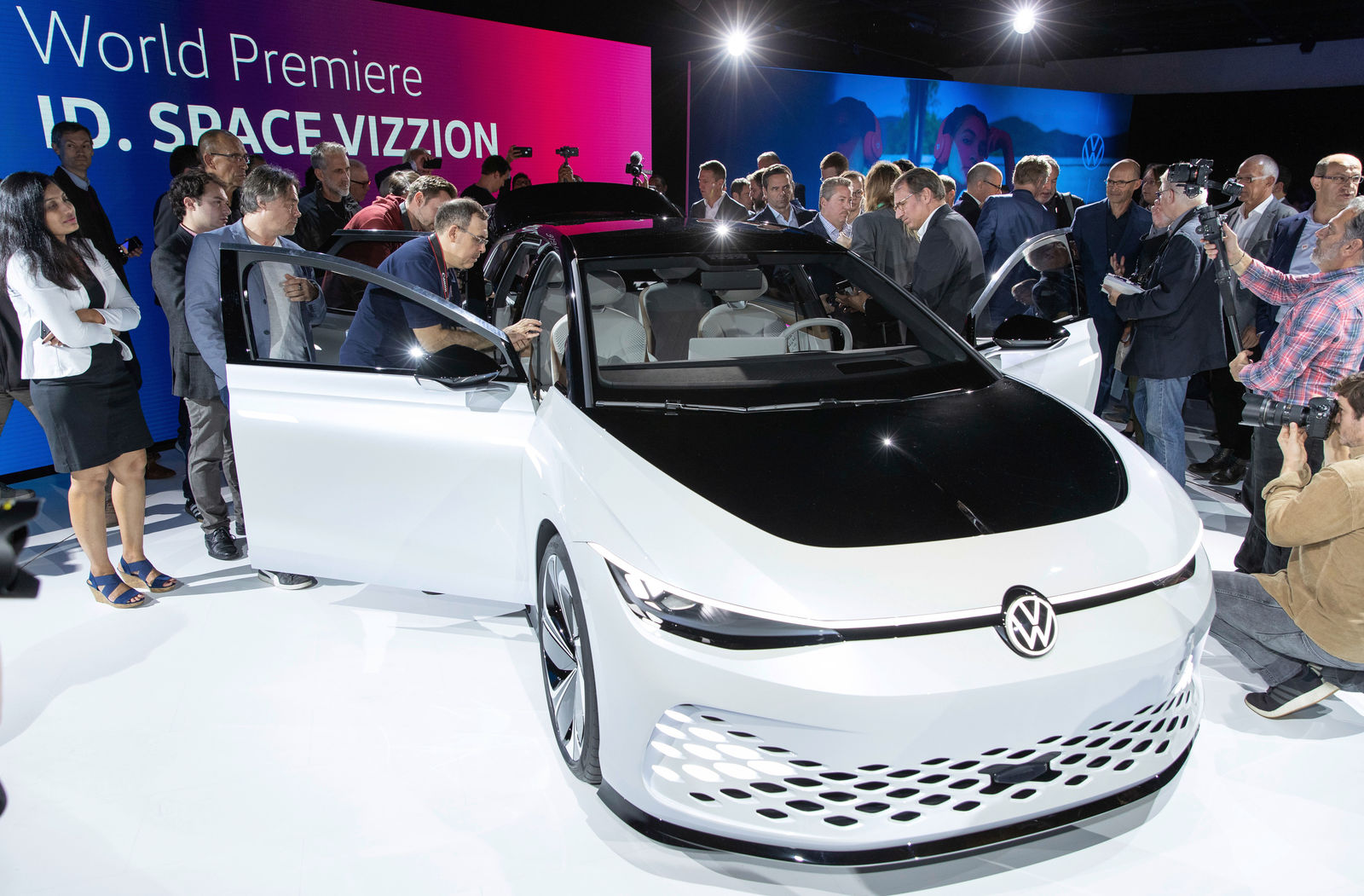 How it all began

We start our tour with the first of the exhibition’s six themes, which deals with the origins of the Volkswagen brand in the USA. What made Volkswagen great here? Obviously the original air-cooled Volkswagen: Beetle, “Bulli” transporter etc. The first area presents highlights from seven decades of Volkswagen in the United States. The most eye-catching of these is a classic Volkswagen Type 2 with a striking two-tone livery. 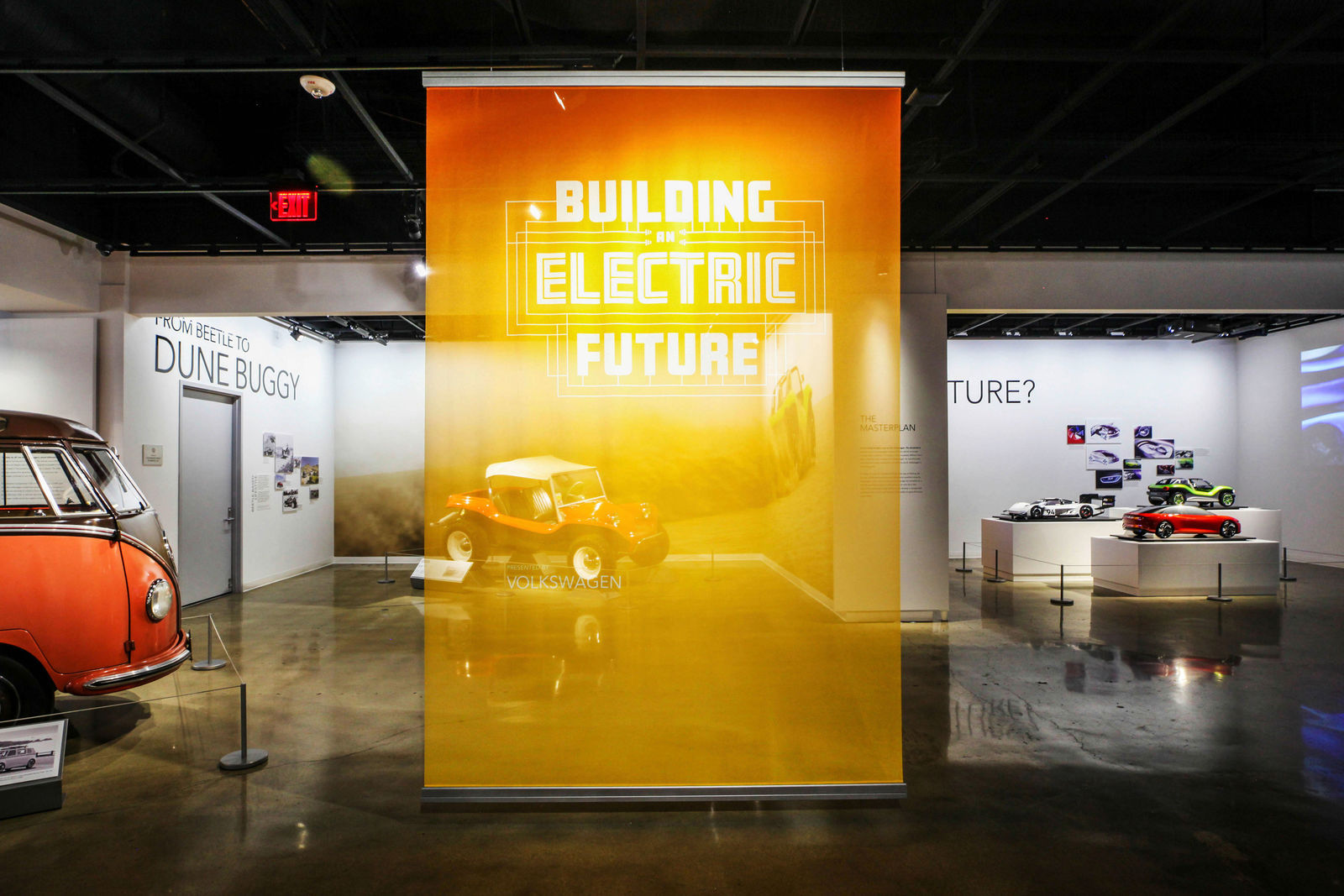 The heritage area, with the ‘Bulli’ transporter (left) and the “Manx Buggy” in the background.

Sun, sand, wind in your hair and a babbling Boxer in the rear: the second exhibition zone, “Beetle-based Beachlife”, is dedicated to the “California Dreaming” spirit of that era, which was closely associated with Volkswagen. The central exhibit here is an original “Manx Buggy” with a trendy “Old Red” paint job – the origin of many other forms of buggy based on the Beetle.

The start of a new era: in the next part of the exhibition, Volkswagen takes visitors on a journey into the present and future of mobility, offering an insight into the development and design process behind the new ID. family. What does the next generation look like, and how is it formed? Many sketches and pictures from Volkswagen Design offer striking insights into the development of the new ID. family. 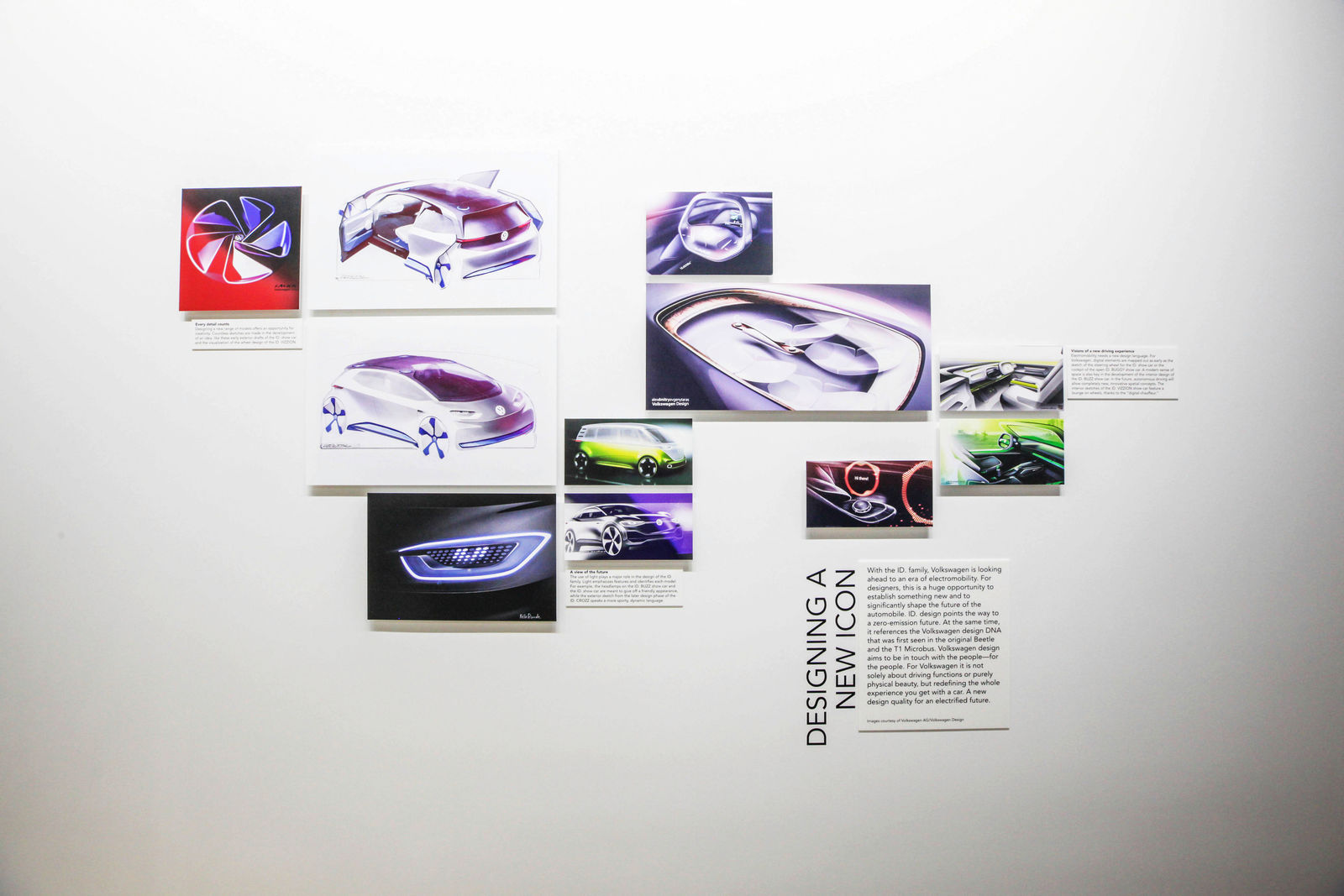 Sketches on the info walls illustrate the design process.

Klaus Bischoff, Head of Volkswagen Design, explains: “Volkswagen is moving into the future with the ID. family. The natural styling and totally intuitive user experience show a new, electrical way of thinking. With the fascinating “Building an electric Future” exhibition in the Petersen Museum, we are allowing people to experience this process and bringing visitors closer to the development of the mobility of tomorrow.”

Time to celebrate a marriage

It is a very special process in the production of an automobile: the so-called “marriage” – the moment, in which the chassis and the powertrain become one. The latter is known within Volkswagen’s new ID. family as the MEB (Modular Electric Drive Matrix). Under the motto “One for the family”, visitors in this this area are guests at the marriage of the new Volkswagen ID.3, the chassis of which can be seen here with the MEB. 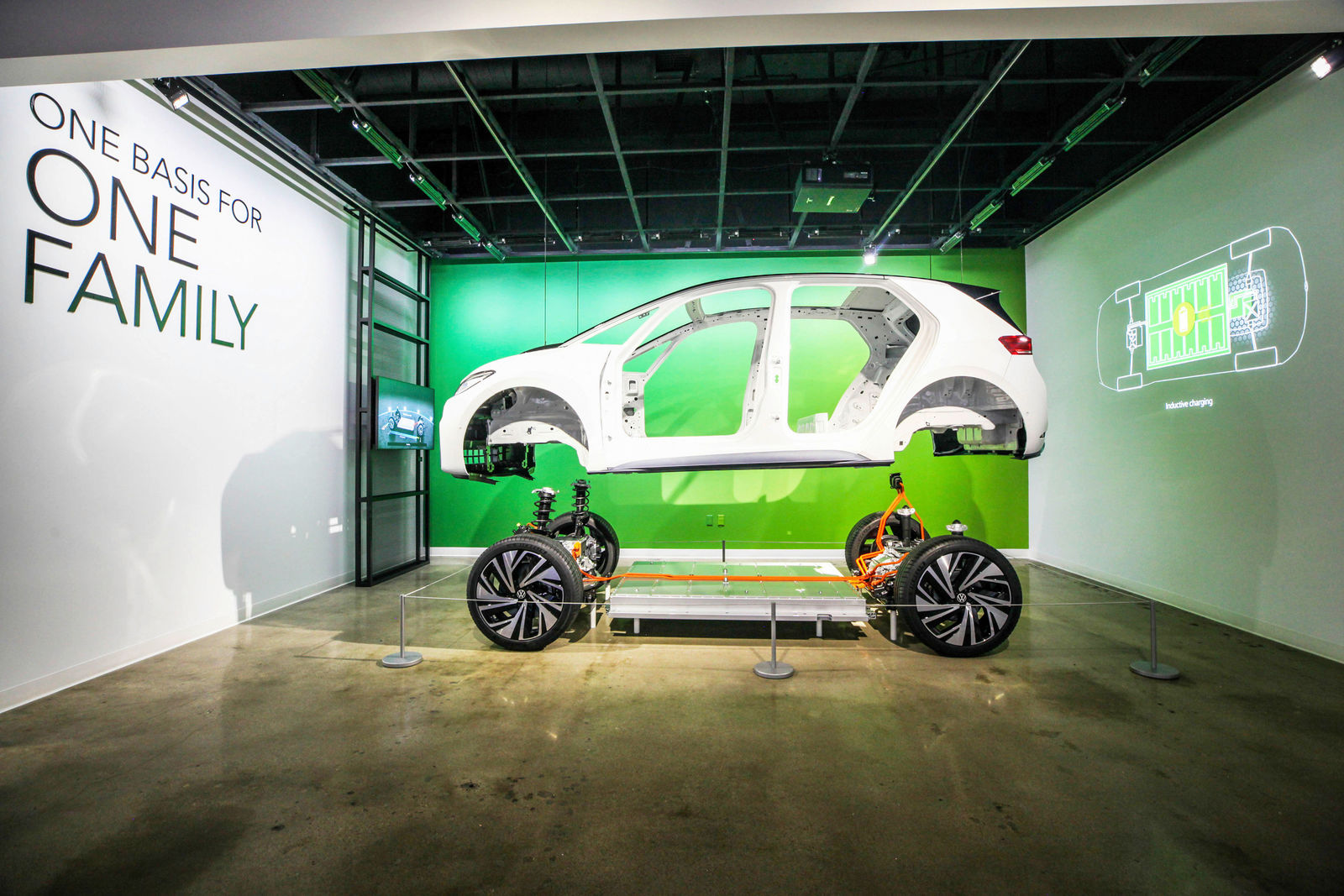 A “marriage” made in heaven: the ID.3 chassis and the MEB.

Immerse yourself virtually in the “green factory”

Where has the actual marriage taken place between the MEB and the chassis of the ID.3, which has been in production since the start of November? Obviously at the Volkswagen plant in Zwickau. This part of the exhibition has a very special highlight in store for visitors: with the help of VR (Virtual Reality) glasses, anyone interested can immerse themselves in the production process and experience the various phases that go into manufacturing in 3D.

Volkswagen engages in initiatives to establish a charging infrastructure at many levels. Together with its dealers, the company is installing a total of 36,000 charging points throughout Europe by 2025. A large proportion of these will be publicly available. Volkswagen is also launching its own wallbox for home charging called the ID.Charger. And as a co-founder of the IONITY joint venture, Volkswagen participates in installing 400 fast-charging parks on major European highways. Medium-term, charging an EV is to become as easy as charging a smartphone. 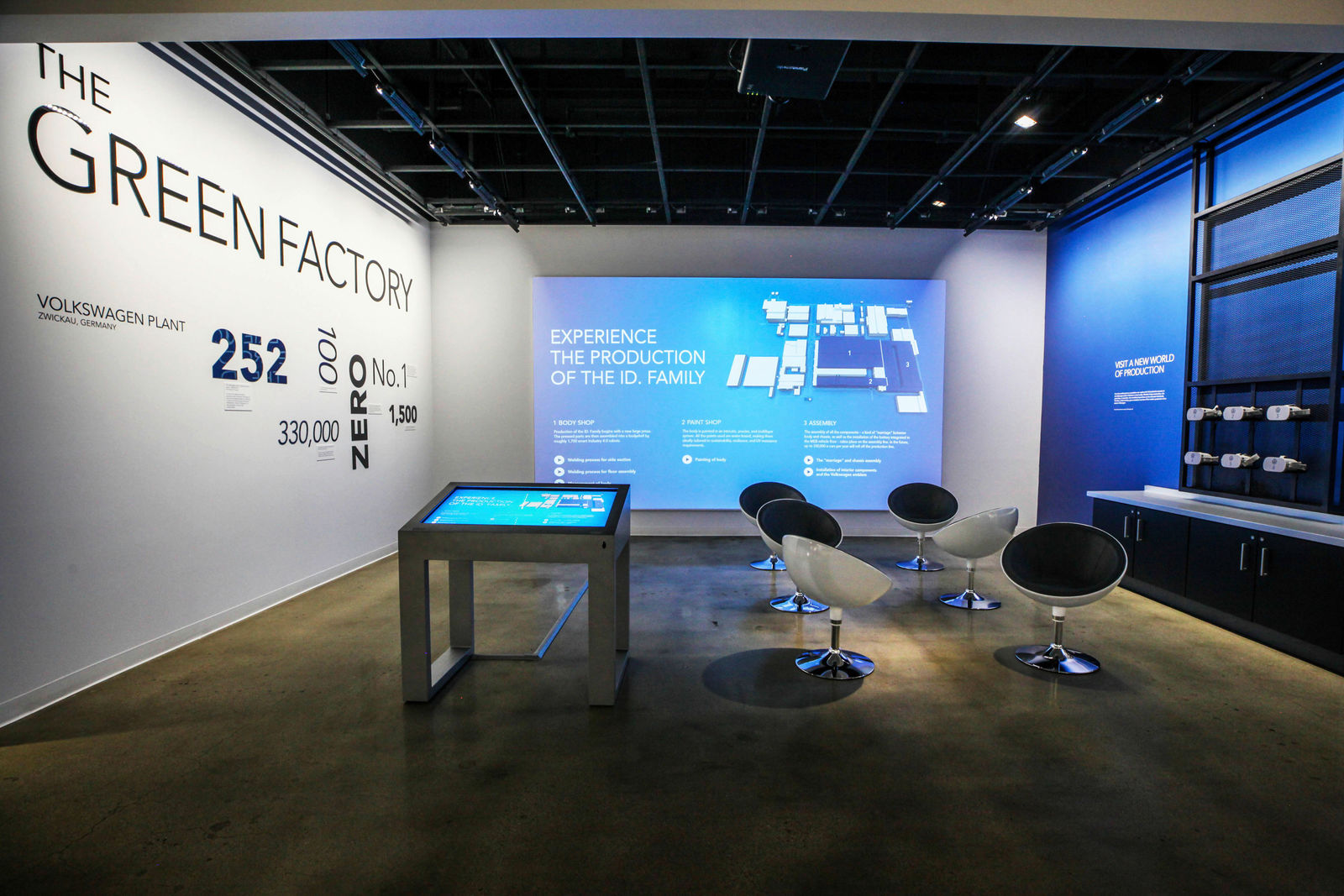 Sit down and prepare to be amazed: here, Virtual Reality allows visitors to experience the individual production phases a the plant in Zwickau.

Visions from the future

In the sixth and final area, Volkswagen offers a glimpse of the future of the automobile: the ID. VIZZION study on display here displays the concept of a fully-electric and autonomous luxury-class saloon. The fascinating concept car illustrates how driving may look in the near future: completely networked, fully-automated driving, with no steering wheel. 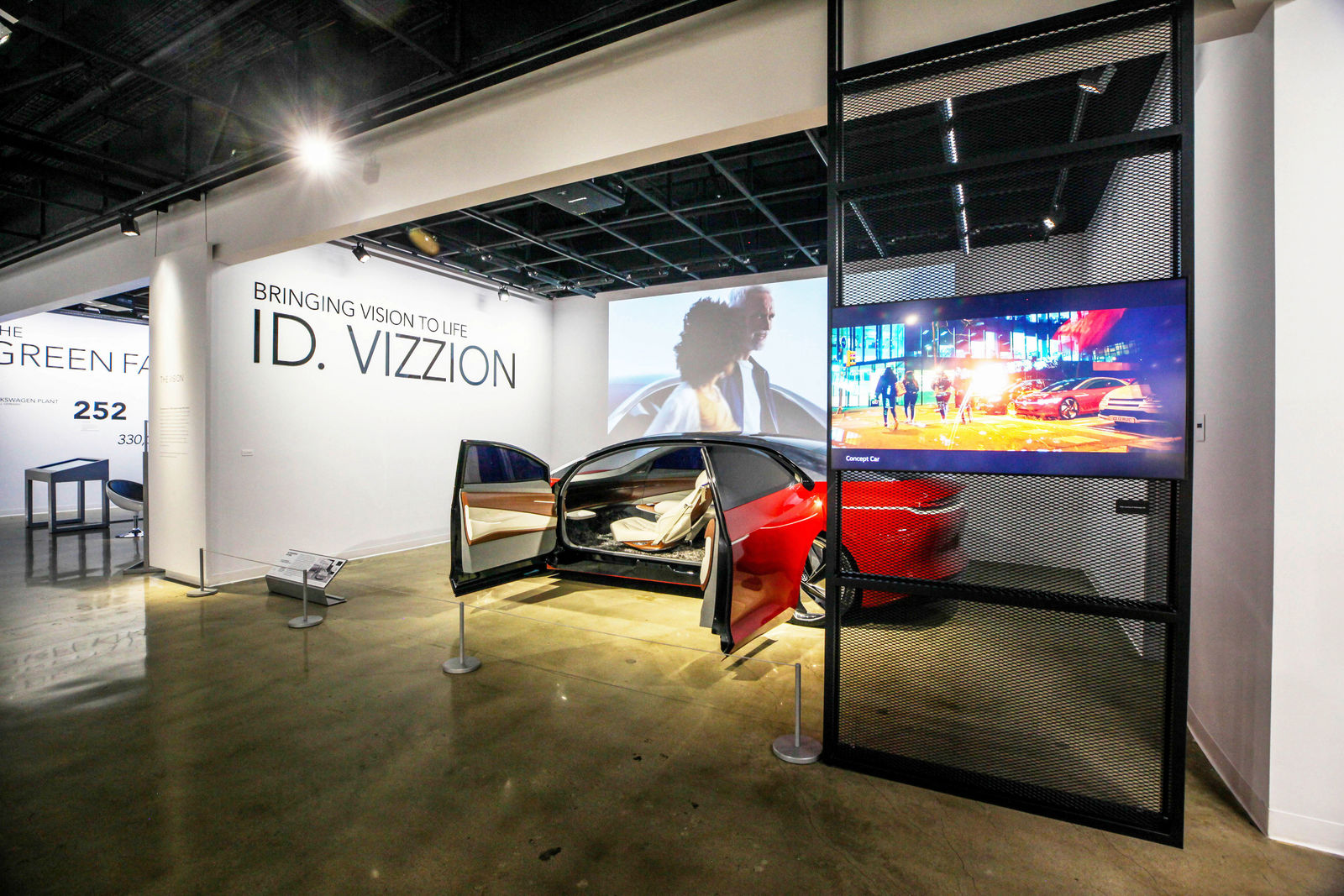 The captivating ID. VIZZION study also forms part of the exhibition at the Petersen Museum.

In the “Chuck Wegner Gallery” visitors can marvel at the sporty ambassador to the ID. family: the 500-kW (680-PS) Volkswagen ID.R. The four-wheel drive prototype, developed by Volkswagen Motorsport, won the legendary “Pikes Peak International Hill Climb” in 2018 and went on to set further records. 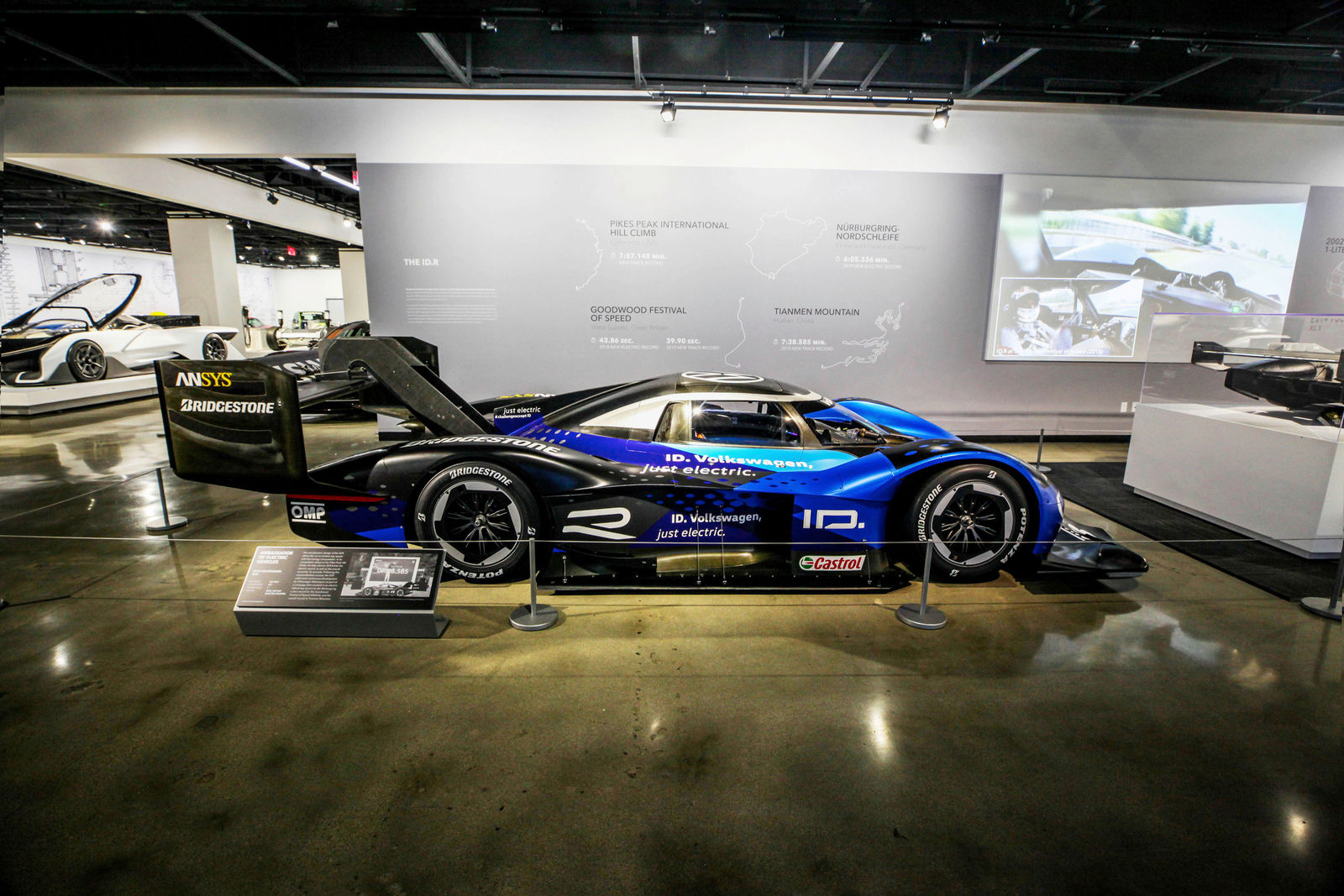 With the “Building an electric Future” exhibition, Volkswagen and the Petersen Automotive Museum are building a bridge between the past, presence and future of mobility. The exhibition in Los Angeles is open until September 2022. 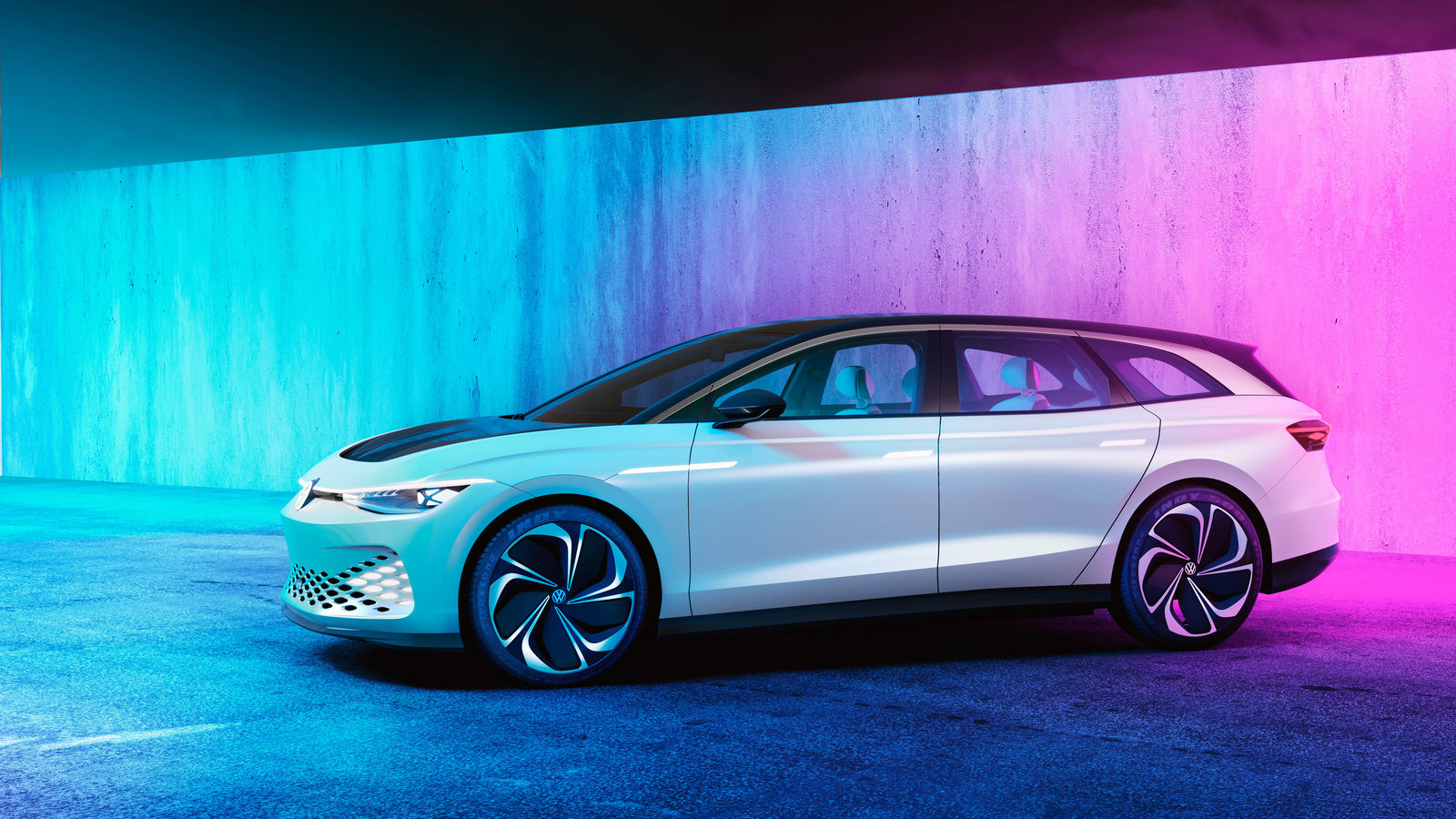 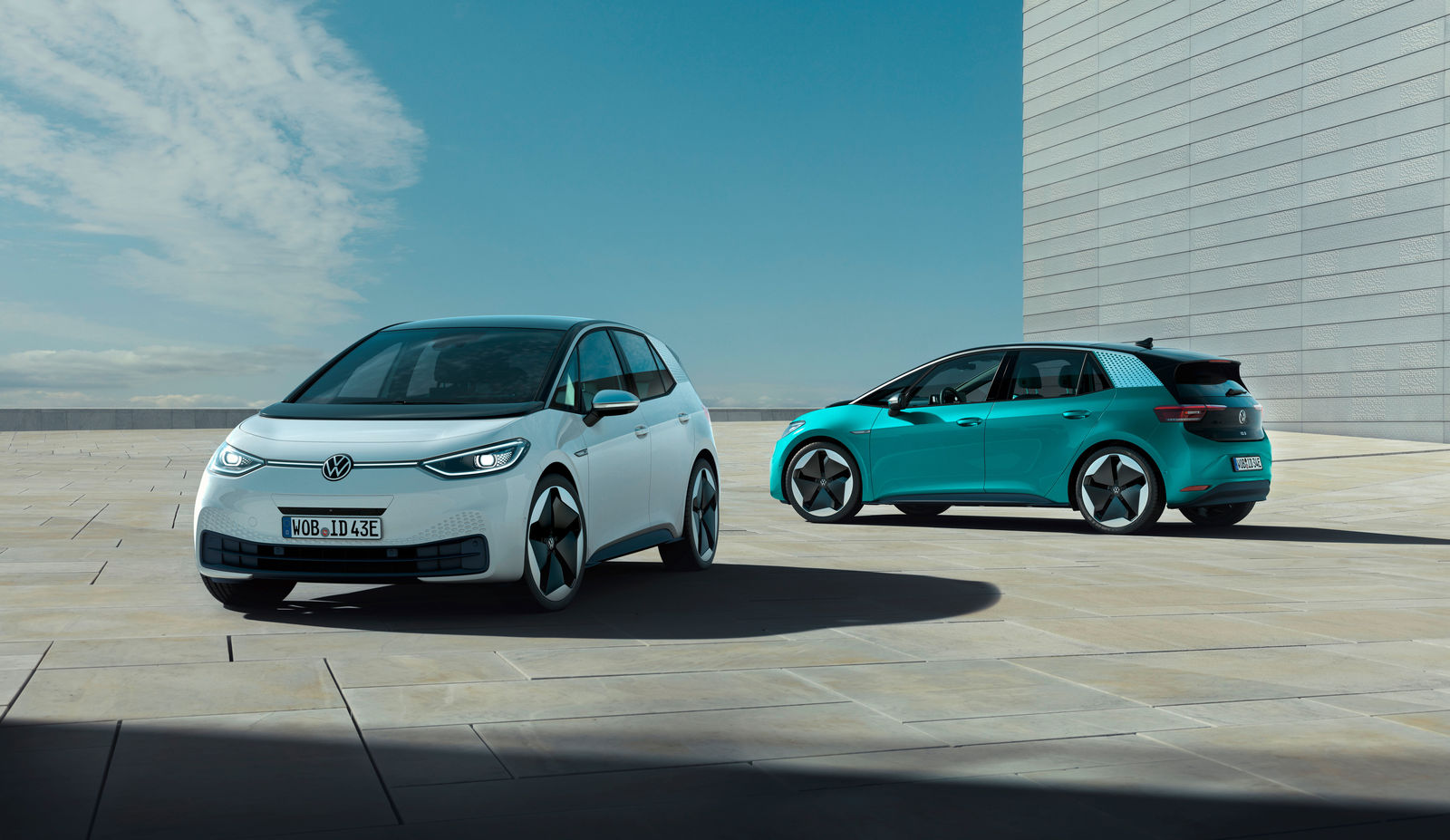 More about e-mobility at Volkswagen 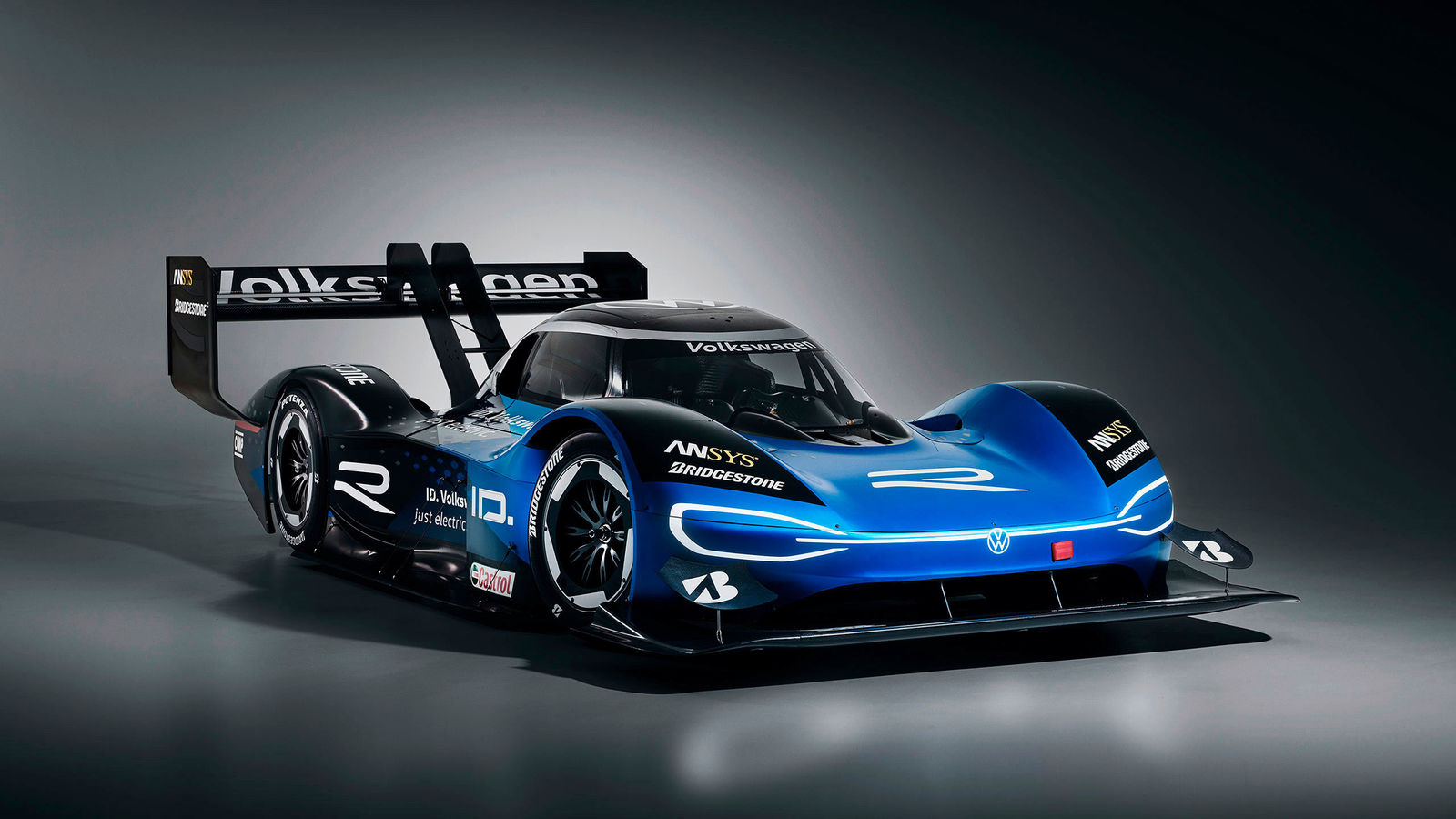