Volkswagen started with six cars at the 2018 Edelweiß Bergpreis Rossfeld 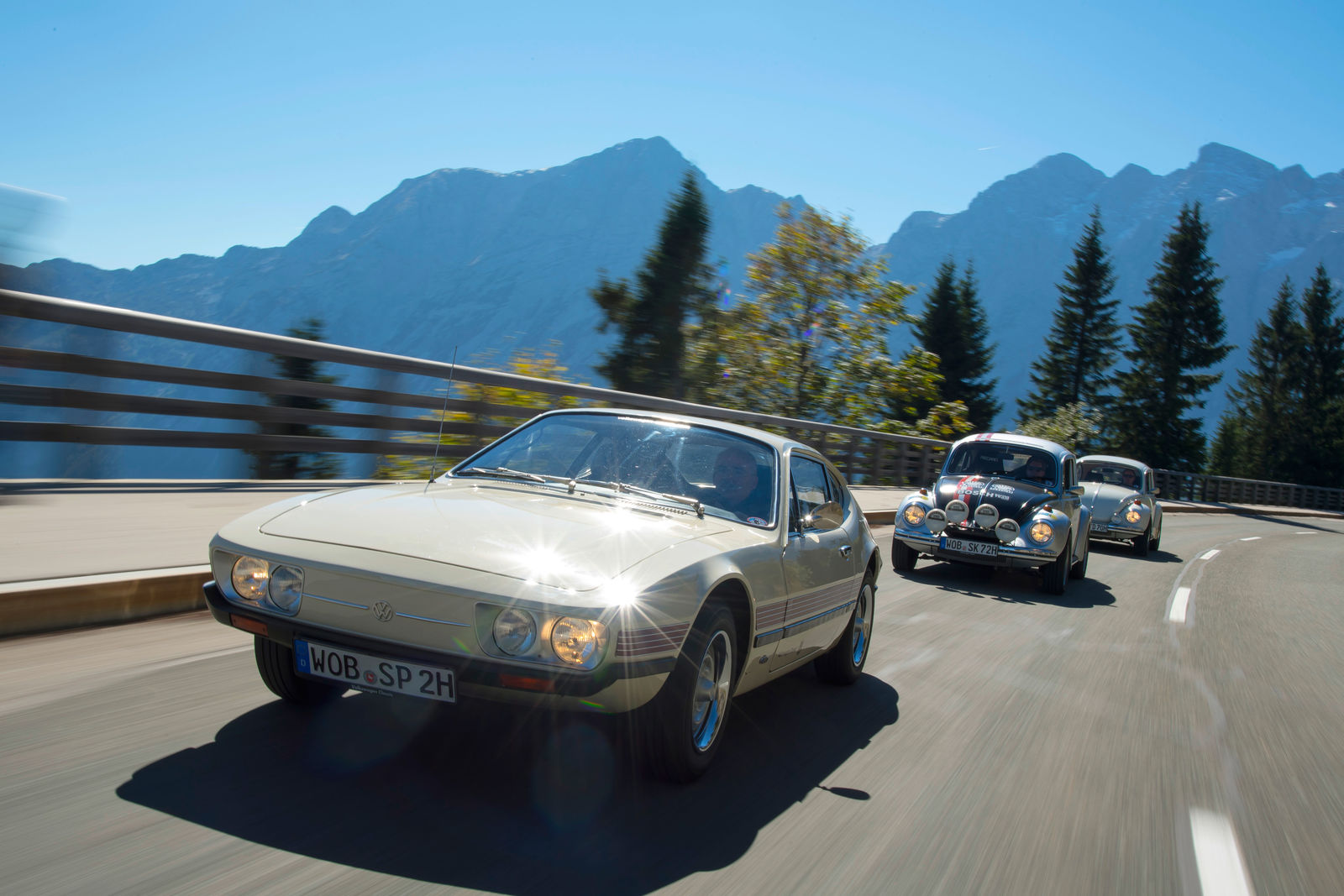 The exotic Volkswagen SP2 leads the beetles up the hill.

Hundreds of people made their way up the mountain in the early hours of the morning – hordes of fans of historic cars, many of them in contemporary Bavarian costume. Their objective? To secure the perfect spectators’ spot along the Rossfeld-Höhenring road in the Berchtesgaden Alps, where all the action was set to take place on 29 and 30 September. The fifth edition of the International Edelweiß Bergpreis Rossfeld hill climb boasted an impressive field of starters comprising more than 150 historic vehicles. This hill climb dates back to the 1920s and has also seen Formula 1 stars such as Jim Clark and Niki Lauda storm up to Obersalzberg. Since 2013, the hill climb has been held as a retro event for a good cause, and the event’s main partner Volkswagen took no less than six wheeled crowd-pullers to the mountain.

If there’s one vehicle in Volkswagen Classic’s historic fleet that’s the perfect fit for this scenery, it would have to be the famous twin-engine Golf Mk2 ‘Pikes Peak’ from 1987. And the icing on the cake was, of course, to have the very same driver behind the wheel of this 650 PS hill climber who entered the legendary Pikes Peak International Hill Climb that year. Rally legend Klaus-Joachim ‘Jochi’ Kleint not only industriously gave out autographs – he also proved that even three decades later he can still masterfully steer the turbo monster along the approximately six-kilometre route, as if no time had passed at all. 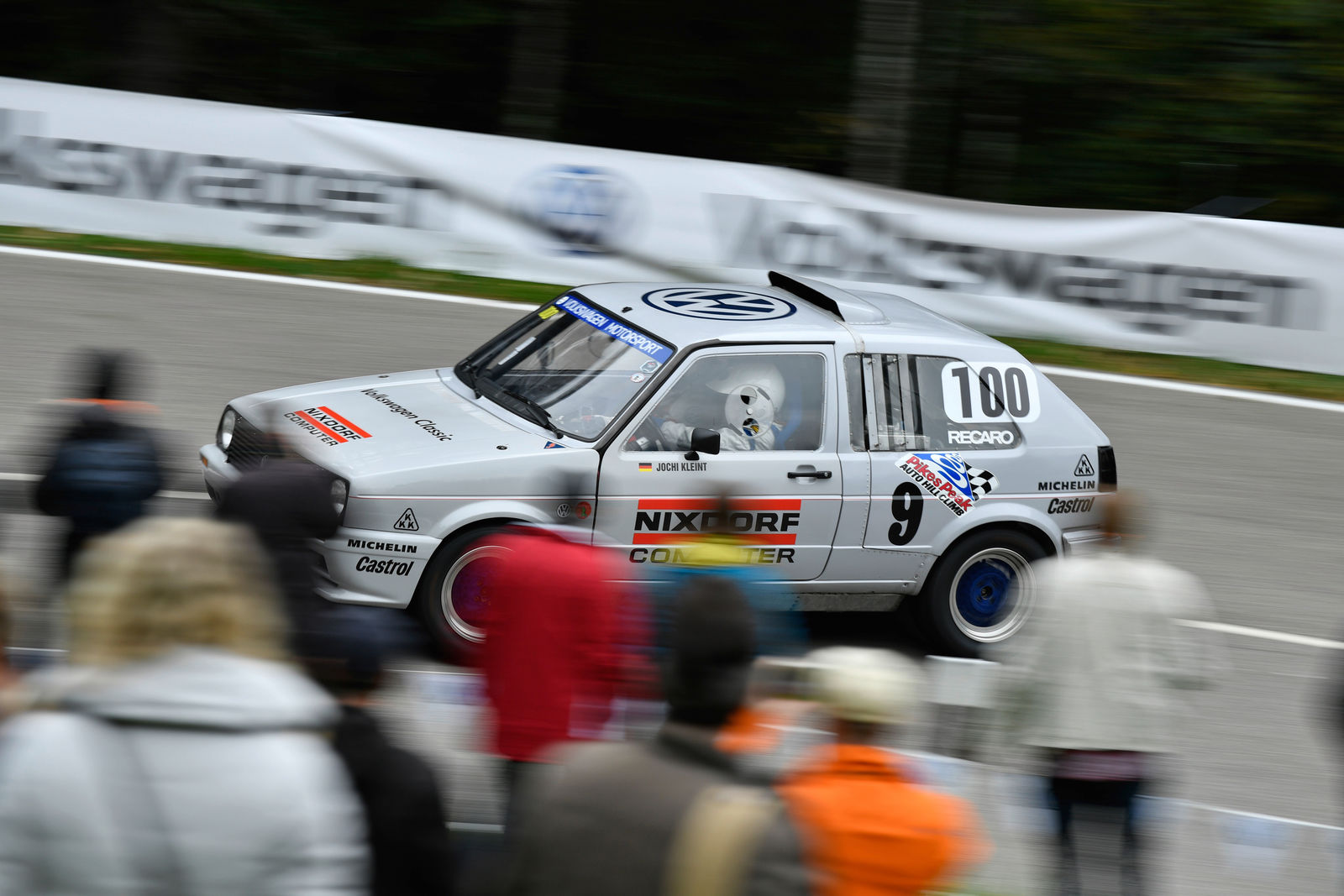 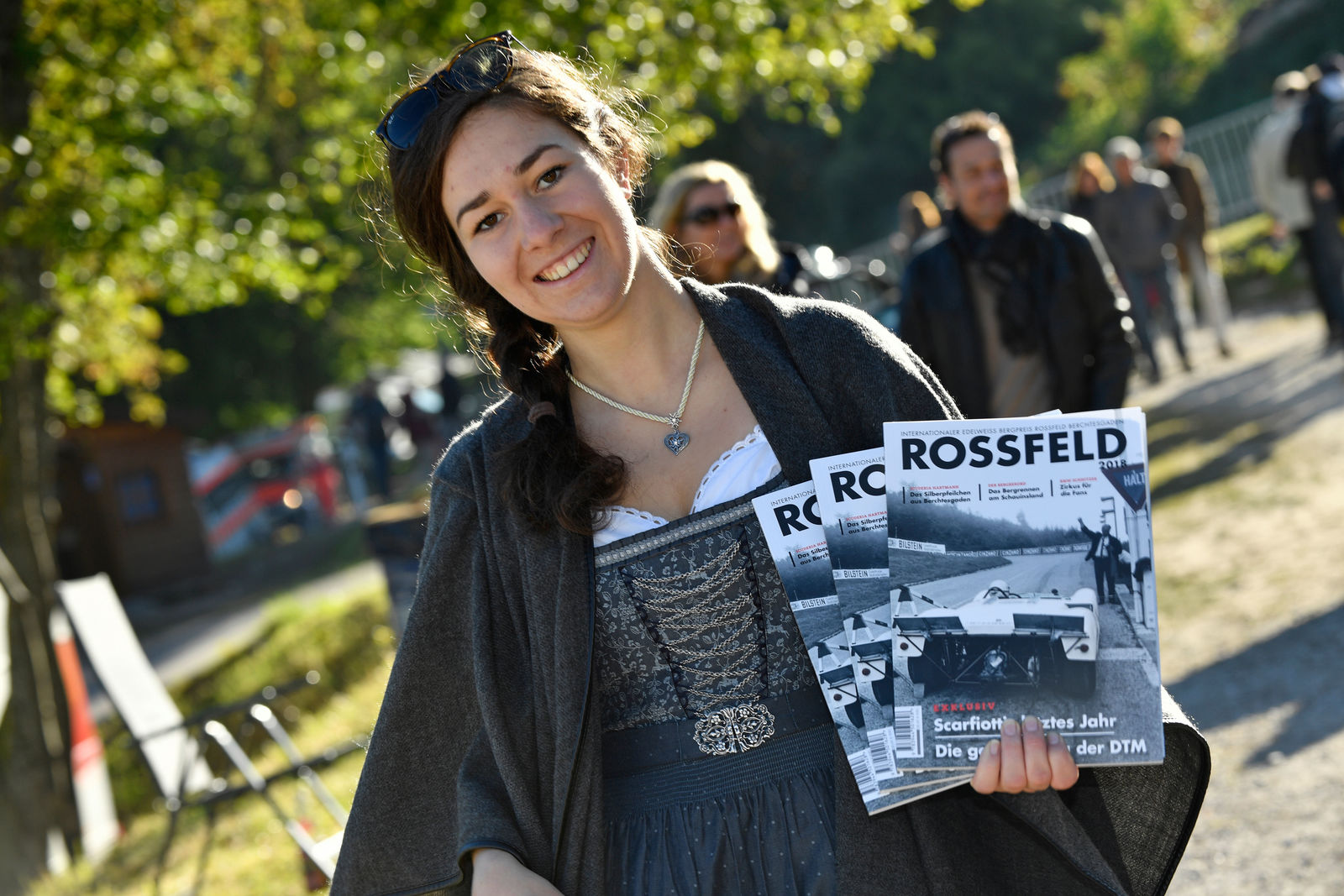 The Rossfeld Magazin tells guests all about the long history of this hill climb.

In the passenger seat for a good cause

It was not only the spectators that had the opportunity to witness the rally old hands’ driving skills as they basked in the glorious late summer weather – so too did a number of co-drivers, as the Pikes Peak Golf had been fitted with a second seat especially for the event. And this seat in the final race on the Sunday afternoon was auctioned off among the spectators to raise money for a good cause, with all the proceeds being donated to the organisation Lebenshilfe Berchtesgadener Land, which supports people with disabilities – a commendable act on the part of the organisers, and one which Volkswagen was more than happy to support. The ride with Jochi Kleint was secured by Eleonore Rupp of Nuremberg, who promptly exchanged her traditional costume for a racing suit: ‘I’ve always wanted to sit in a racing car with a professional. What a fantastic experience!’, a delighted Eleonore said at the finishing line. 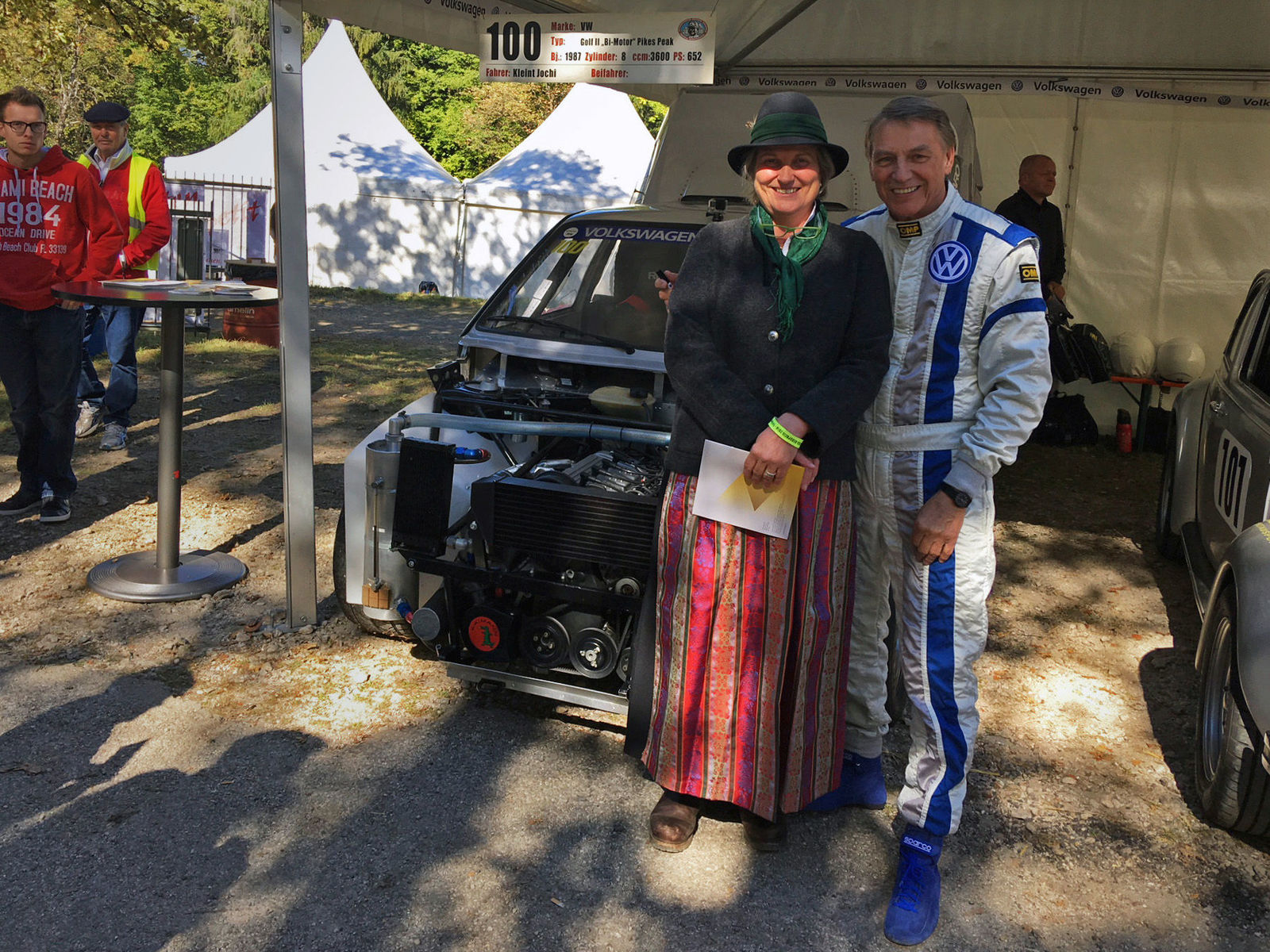 Eleonore Rupp bought a ride in the Golf ‘Pikes Peak’ with Jochi Kleint in an auction – and was thrilled. 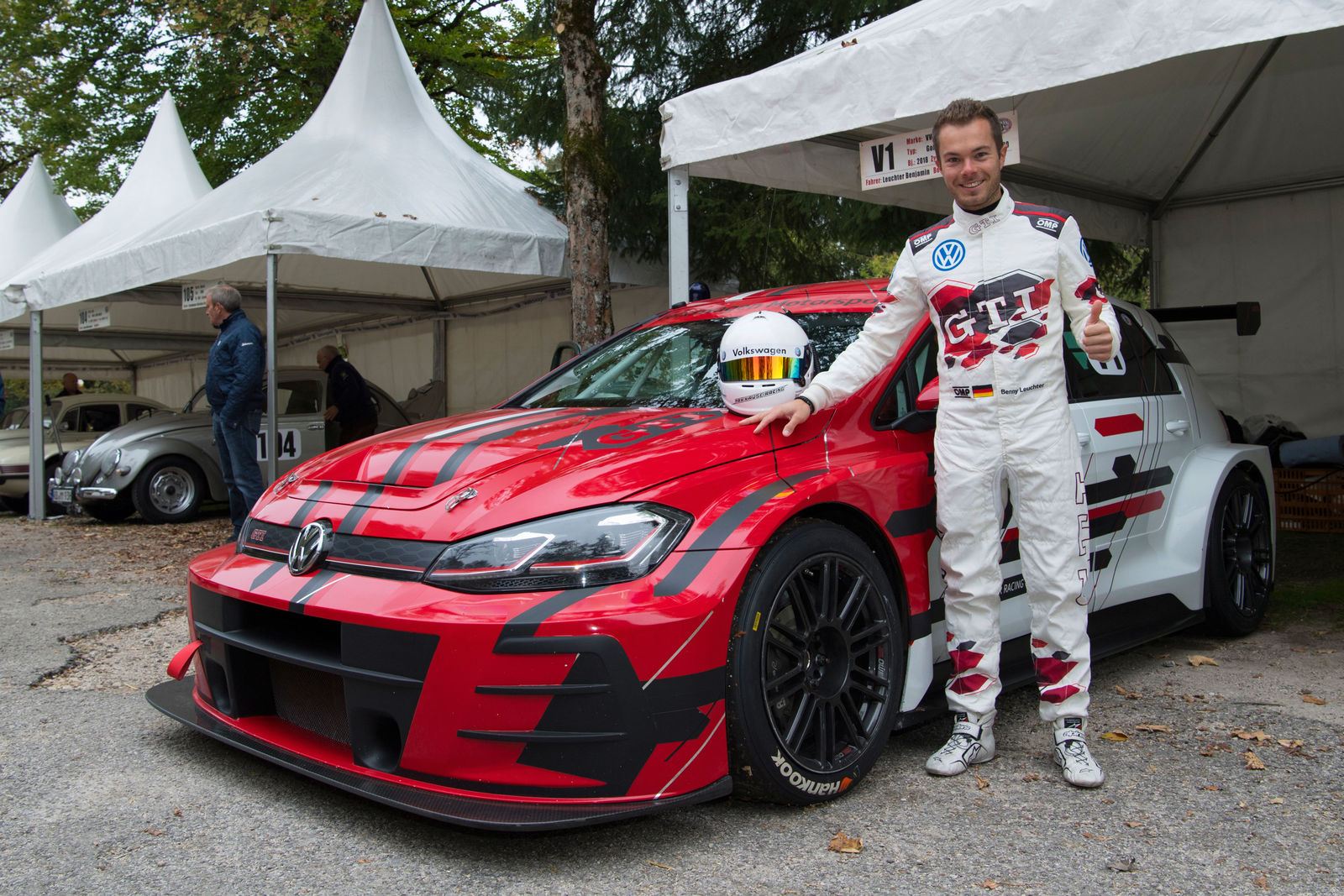 Professional on circuits delights in hitting the slopes

A professional took to the wheel of the current Golf GTI TCR too: the racy touring car was driven up the mountain by racing driver and Volkswagen brand ambassador Benjamin Leuchter. ‘It’s great to be able to drive the TCR racing car somewhere other than on a circuit for a change,’ said the delighted 30-year-old professional touring car driver, who drives the vehicle in the ADAC TCR Germany racing series. ‘The spectators that line the route really go wild as you make your way back down from the mountain. The atmosphere here is fantastic.’ This was thanks not only to the Golf GTI TCR’s sporty looks, but also to the impressive sound of the 257 kW (350 PS) TSI engine.

The hills are alive with the sound of engines

Talking of sound, this was obviously made especially impressive by the picturesque mountain scenery. There was quite a range of sounds, from thumping V8s to sawing six-cylinder engines and murmuring boxer engines. Classic boxer engine sound was provided by the three performance-enhanced Beetle models that Volkswagen took to Roßfeld: the 1302 S Rallye Salzburg Beetle from 1971 and the tuned ‘Theo Decker’ Beetle from 1972, both boasting approximately 99 kW (135 PS), and the Mille Miglia Beetle that competed in the famous rally of the same name in 1956 with a comparatively modest 48 kW (65 PS).
And then there was the exotic Volkswagen SP2 from the Volkswagen Classic collection – a beautiful coupé made in Brazil. And Beetle expert Christian Grundmann’s extremely rare Denzel Porsche Killer (1957). Only 68 of this lightweight sports car with a Beetle engine were built, and in its day it delivered a driving performance that exceeded that of significantly more powerful sports cars. 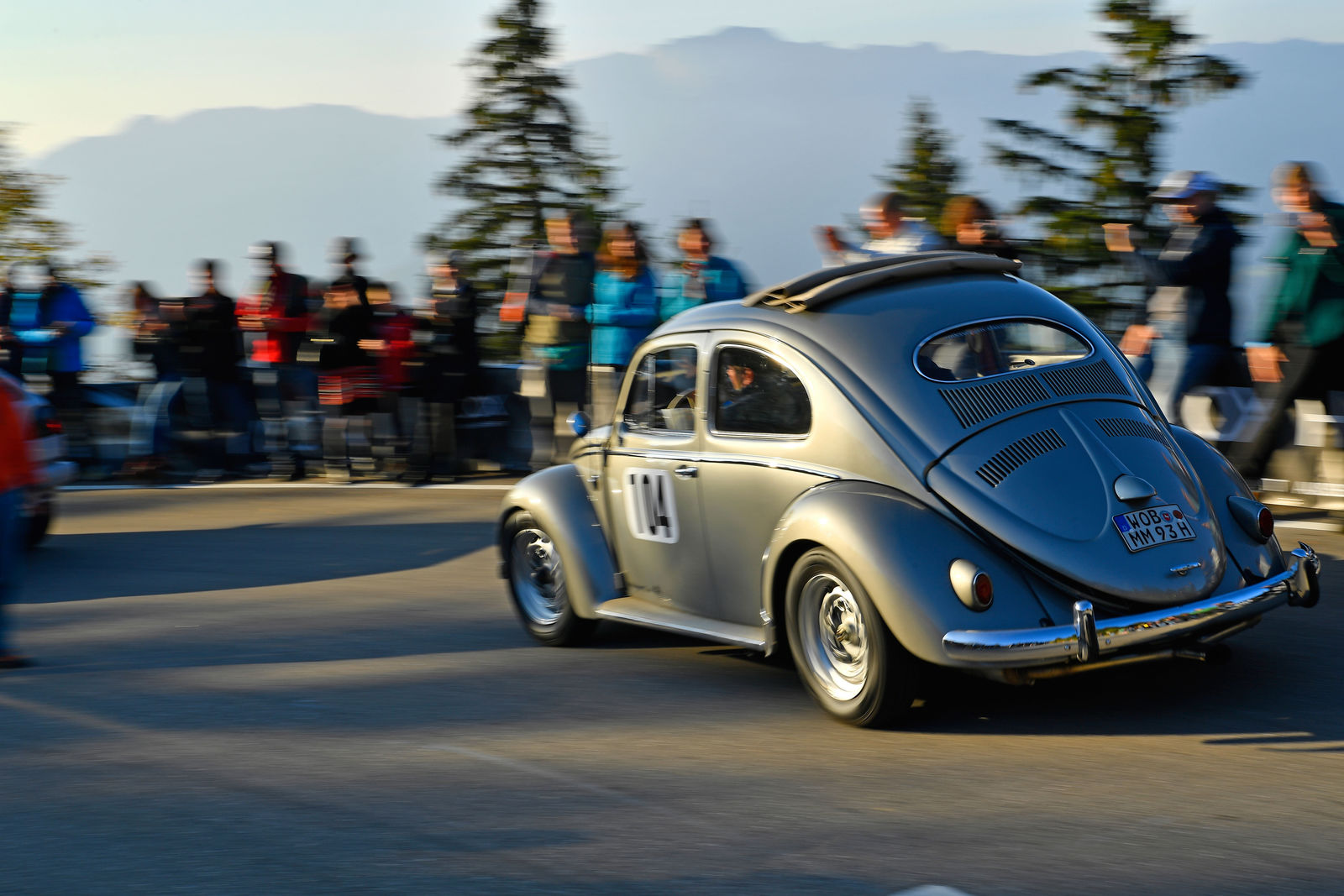 The Mille Miglia Beetle from 1956. 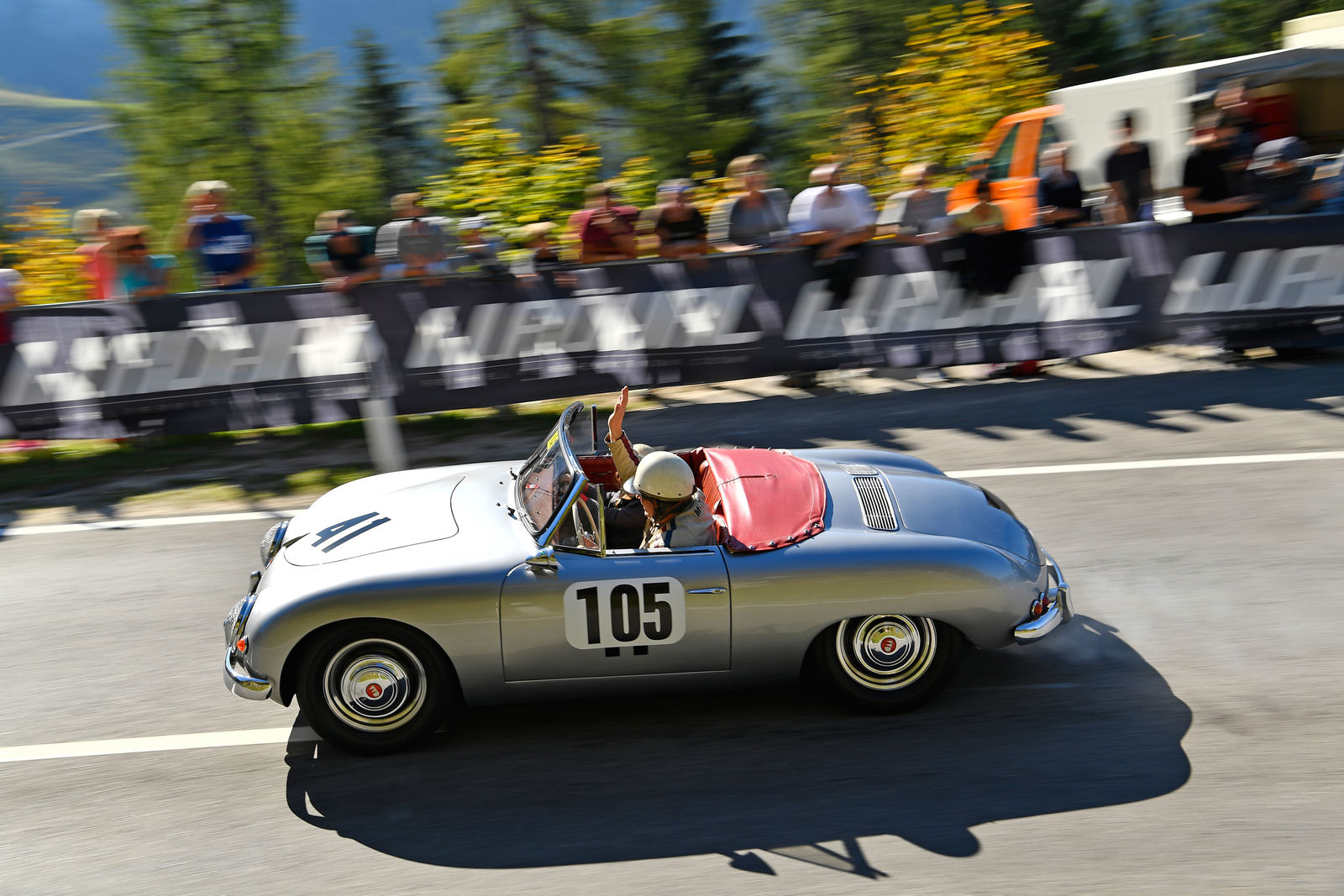 The rare Denzel Beetle made of aluminium had no trouble speeding up the mountain. 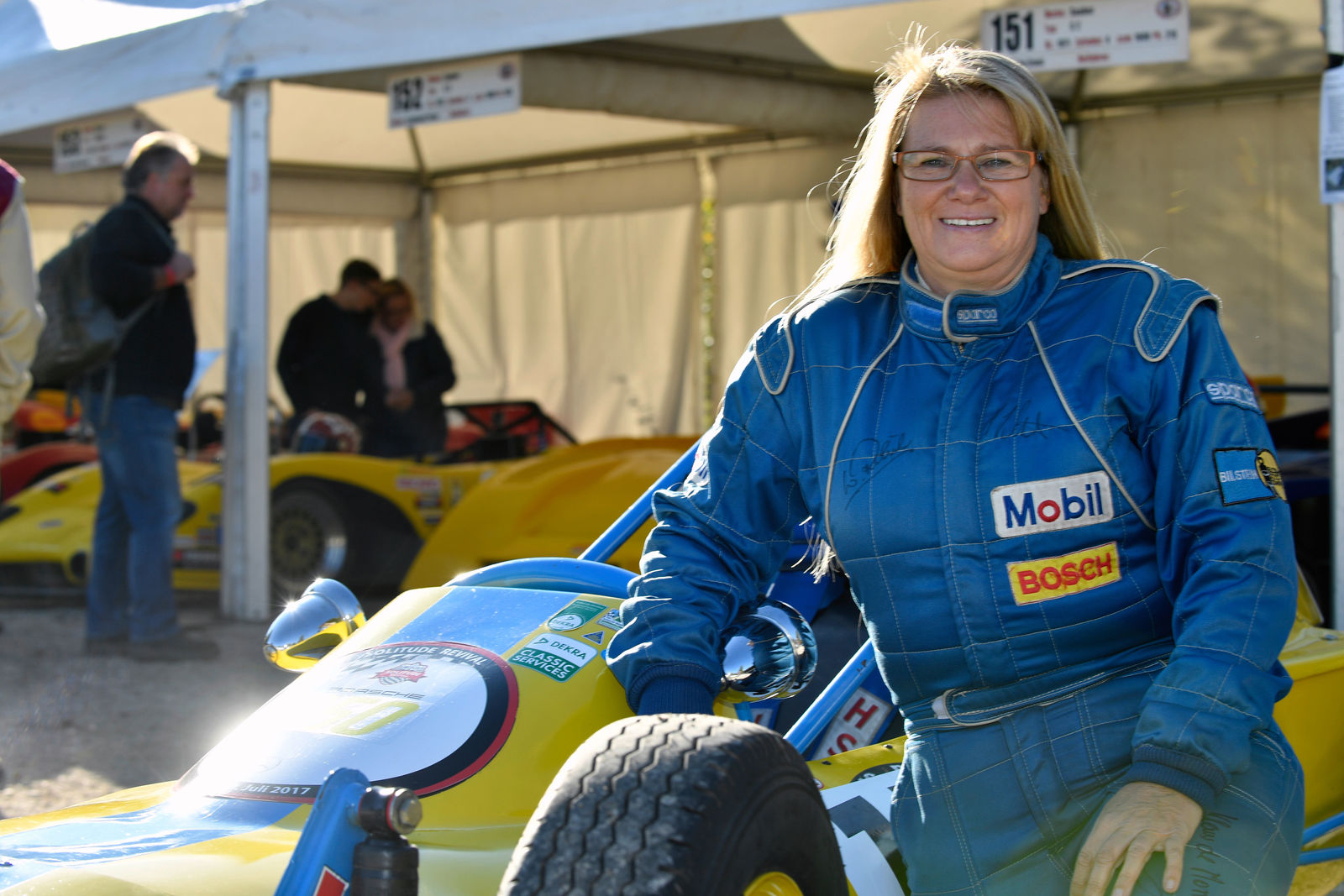 One of the few women in the field of starters: Daniela Hacker of Bayreuth with her Zink Formula Vee from 1968.

Historic Formula racer with Volkswagen power in the rear

Daniela Hacker likewise worked her way up the mountain with Volkswagen power in the rear, driving an authentic Formula Vee racing car from 1968, as one of the few women in the field of starters. Formula Vee was a series for up-and-coming drivers in the 1960s and 70s involving Formula racing cars that were based on Volkswagen technology. Individuals who went on to become icons of motorsport such as Niki Lauda, Keke Rosberg and Nelson Piquet took their first turns in motorsport in Formula Vee. Daniela Hacker’s priority at the Edelweiß Bergpreis event wasn’t speed, but enjoyment: ‘The atmosphere, the time with kindred spirits and talking shop with the others in the drivers’ paddock – I absolutely love it,’ said Daniela, who hails from Bayreuth, in summary.

Those who didn’t bring their own hill climber were nonetheless able to make their way up the mountain in historic style in one of the many historic buses that the organisers laid for the spectators. With the bus drivers being kitted out in historic outfits and sharing technical details and anecdotes from bygone days with the passengers. All in all, it was the perfect overall picture. The fans followed the call of the mountains and will readily come again next time. 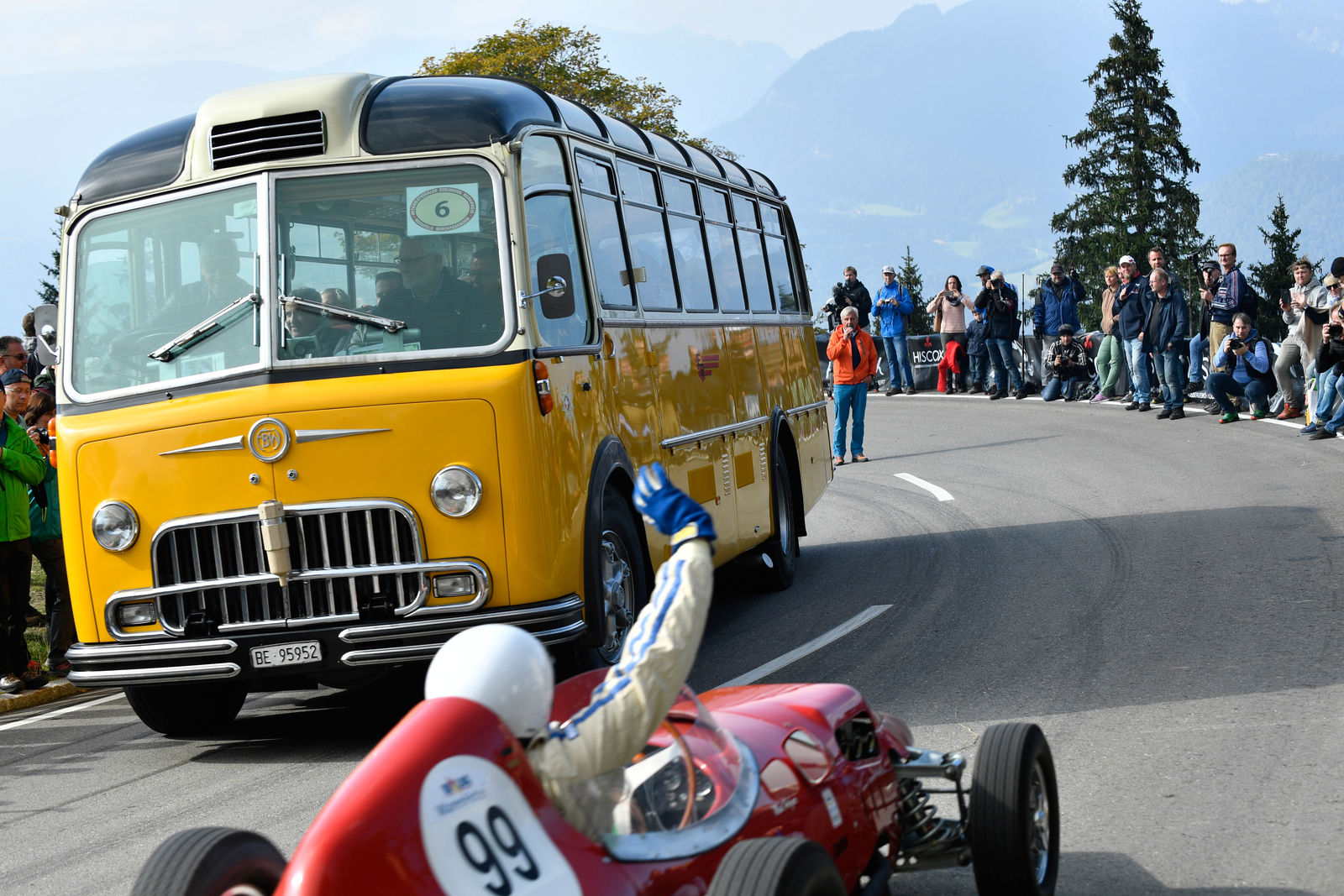 Historic omnibuses took the spectators to the best viewing spots along the route. 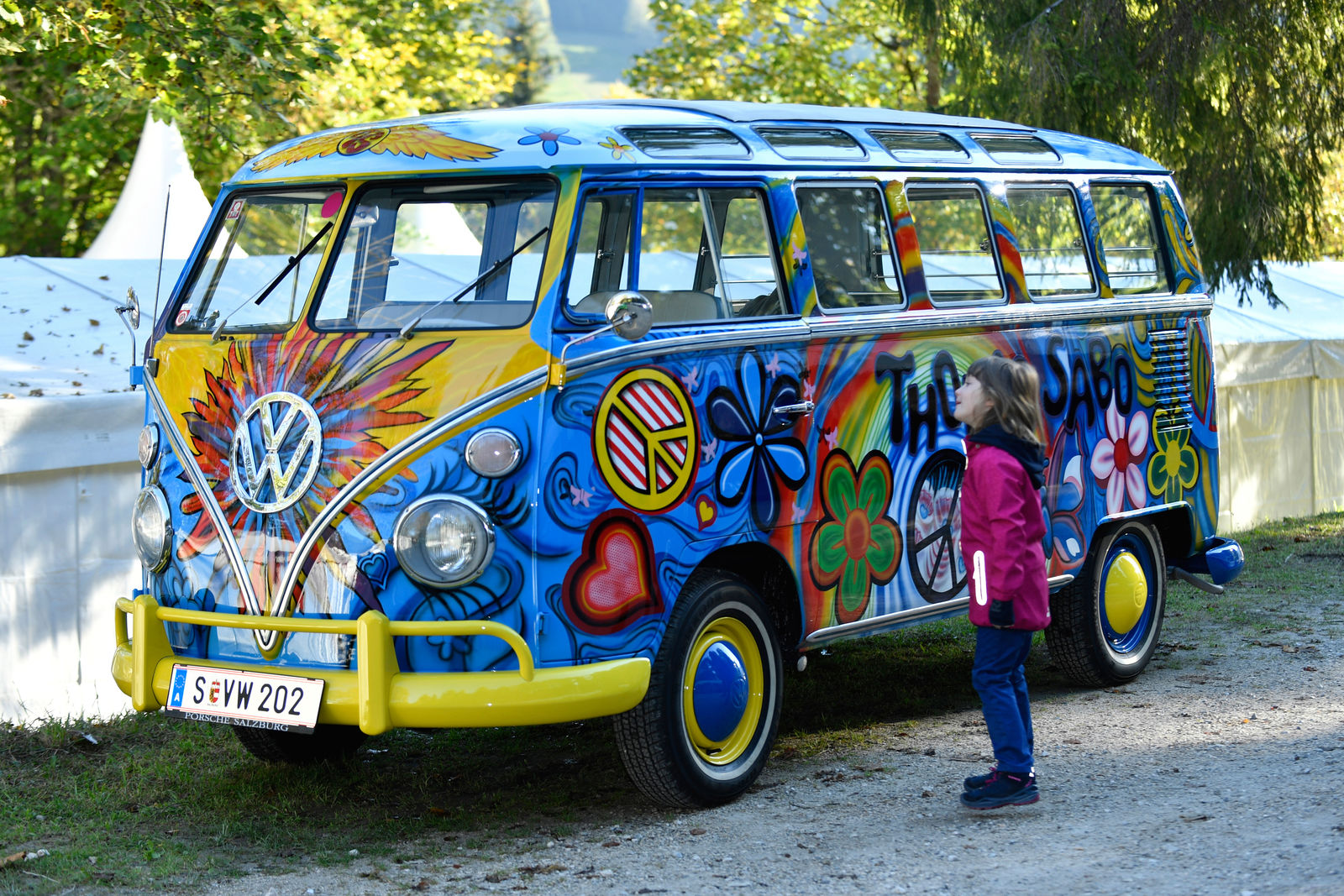 The Rossfeld race is a crowd-puller that attracts fans both young and old.