On the trail of MacGyver

The Volkswagen plant in Emden normally produces the Passat and Arteon. These days, the employees produce self-designed disinfectant dispensers in addition. 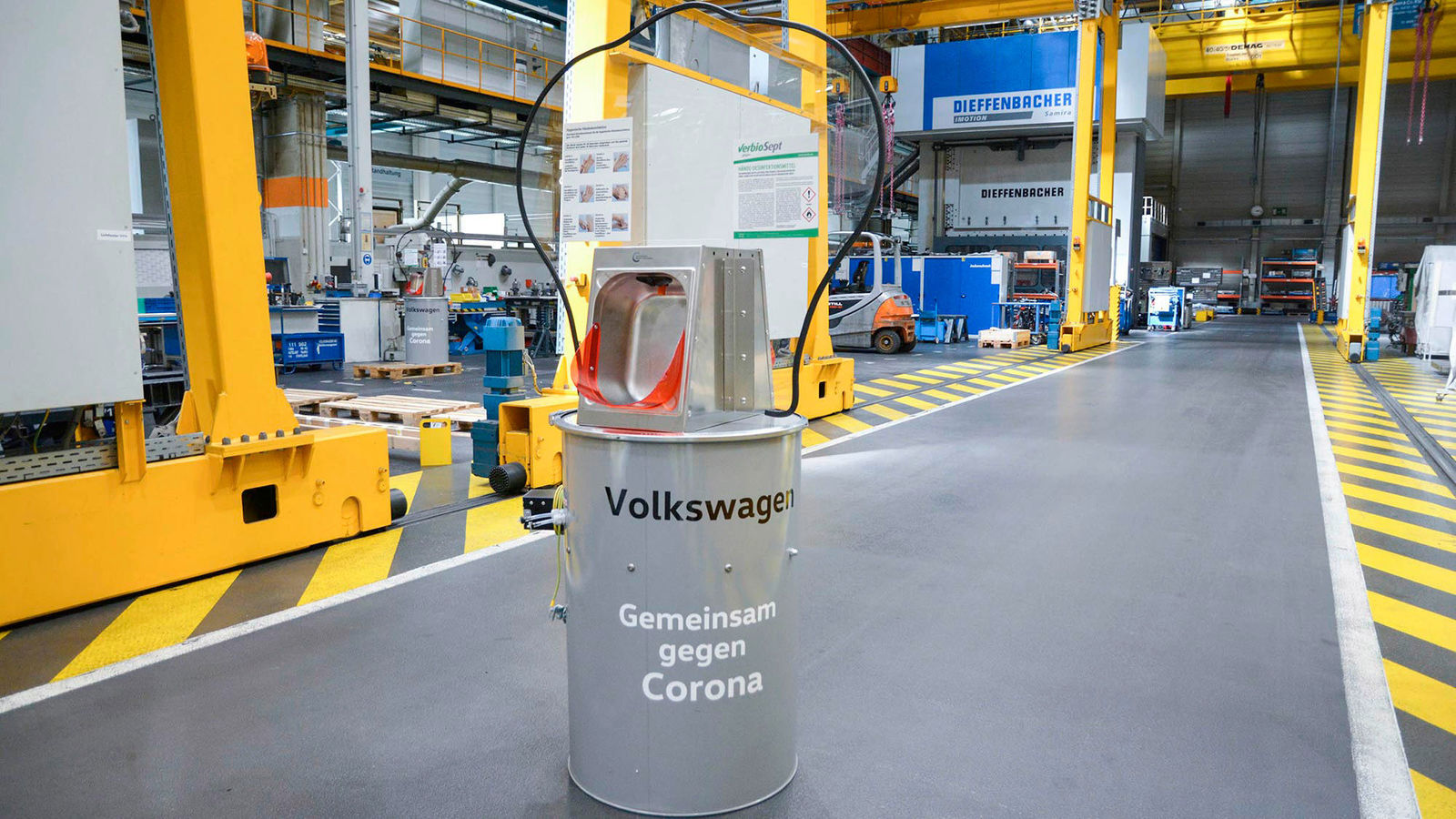 Volkswagen employees in Emden have designed a disinfectant dispenser themselves.

Following the standstill at its plants caused by the coronavirus pandemic, Volkswagen has been gradually ramping up production once again since the end of April. The company attaches great importance to complying with hygiene rules. Among other things, this includes ensuring that employees disinfect their hands. For this reason, large disinfectant dispensers have been set up at short notice at almost all locations.

“These are genuine Volkswagen in-house products,” says Dirk Nieschulze proudly. Nieschulze heads the so-called Competence Center for Technology at the component plant in Braunschweig. Usually, the employees manufacture sheet metal and synthetic tools there, as well as complete production systems, for example for the MEB battery systems.

They are regularly supported by colleagues from the plant and tool site in Emden. In day-to-day business, Nieschulze knows that departments are often trapped in their own control processes. “But when we bring teams together, even from different locations, then these teams are creatively stimulated, and great added value is created for the company,” says the 54-year-old. Loosely based on the motto of the US TV-series, MacGyver: Nothing is impossible! For example, the colleagues from Braunschweig and Emden together built jigs for battery system assembly at the Braunschweig plant. “You couldn’t buy that off the shelf,” says Nieschulze. 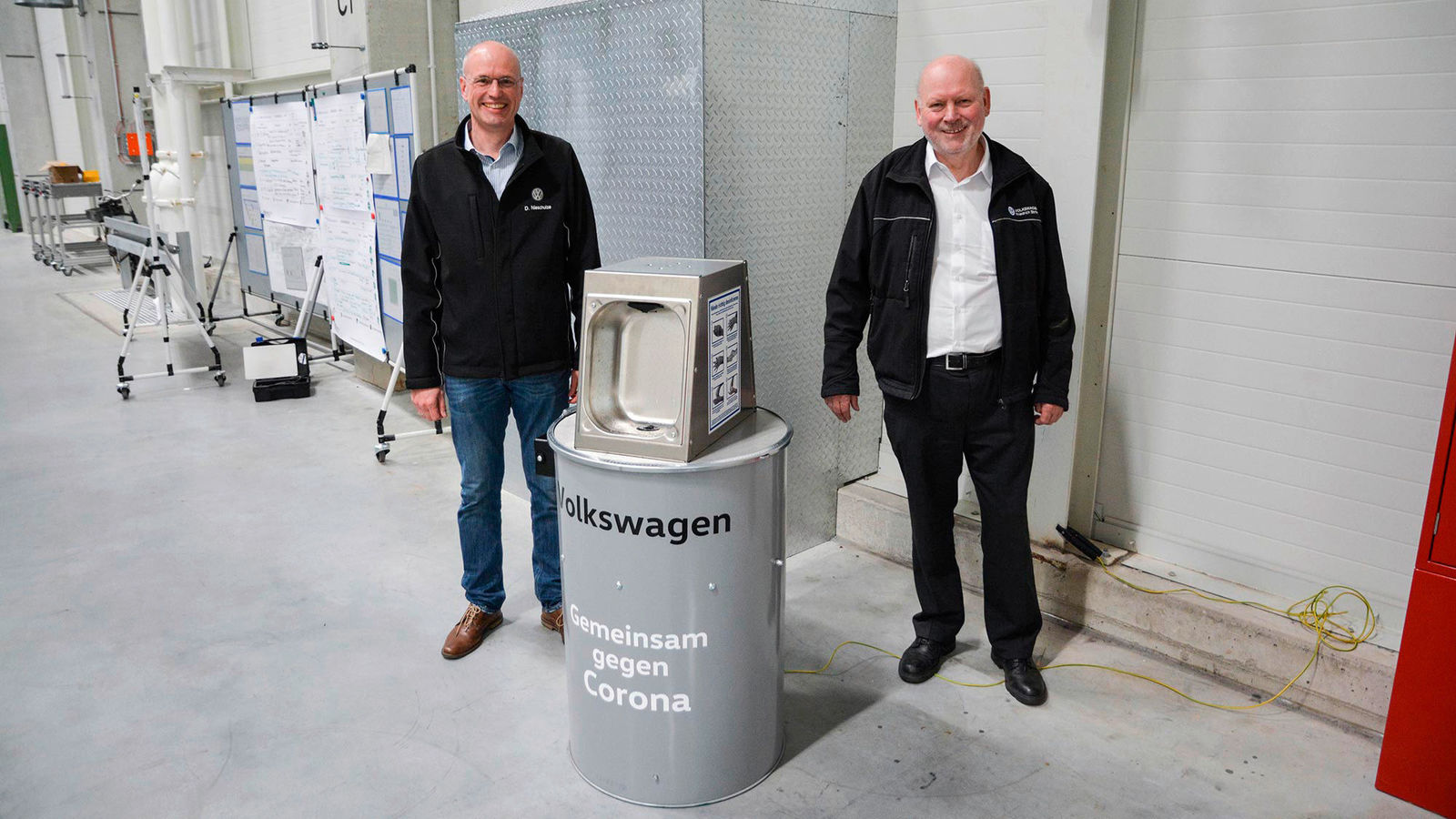 With the disinfectant dispensers this would have been theoretically possible. “However, in order to avoid high acquisition costs and long delivery times, we considered how we could produce the devices ourselves,” explains Nieschulze. On the Wednesday before Easter, the colleagues from the plant engineering department in Emden went to Braunschweig for a brainstorming session, and one day later the first concept sample was discussed in a video conference. And then the construction of the prototype began.

“The team from Emden, which was put together at short notice, immediately took up this challenge enthusiastically. Everyone contributed their ideas and wanted to make the system a success,” says production manager Thomas Scholz, citing as an example the colleagues from the vehicle production department. “They searched every corner of our factory for parts that we could possibly use for the disinfectant dispenser.”

Parts from the Volkswagen world

This consists of exactly 146 individual parts, most of which come from the Volkswagen world. The nozzle from which the disinfectant comes is normally installed in the windscreen cleaning system of the Passat. The stainless-steel bowl in which the employees hold their hands during disinfection is also used in the salad bars of the Volkswagen canteens.

Initially, the search for a suitable main body for the system caused headaches. The first ideas – among others, to take a shelf from the hardware store – were all rejected. On the three-hour drive back from Braunschweig to Emden, Friedrich Strömer, who is known among his colleagues for his creative solutions, had the brilliant idea: The body is made of metal barrels that were previously used as transport containers for adhesives and would normally be scrapped. “They are exactly the right size and are extremely stable due to their shape,” says Strömer, who is the head of equipment and plant construction in Emden.

The production of the prototype was a real team effort. About a dozen colleagues were involved, says production manager Scholz. Whether welders, electronics engineers, toolmakers or industrial mechanics – each contributed their know-how. “This example shows how much potential we have in our company and what comes out when everyone pulls together,” enthuses Scholz and speaks of a “great feeling” when the prototype was put into operation on Easter Saturday, as hoped – and was accepted by the work safety department the following week. 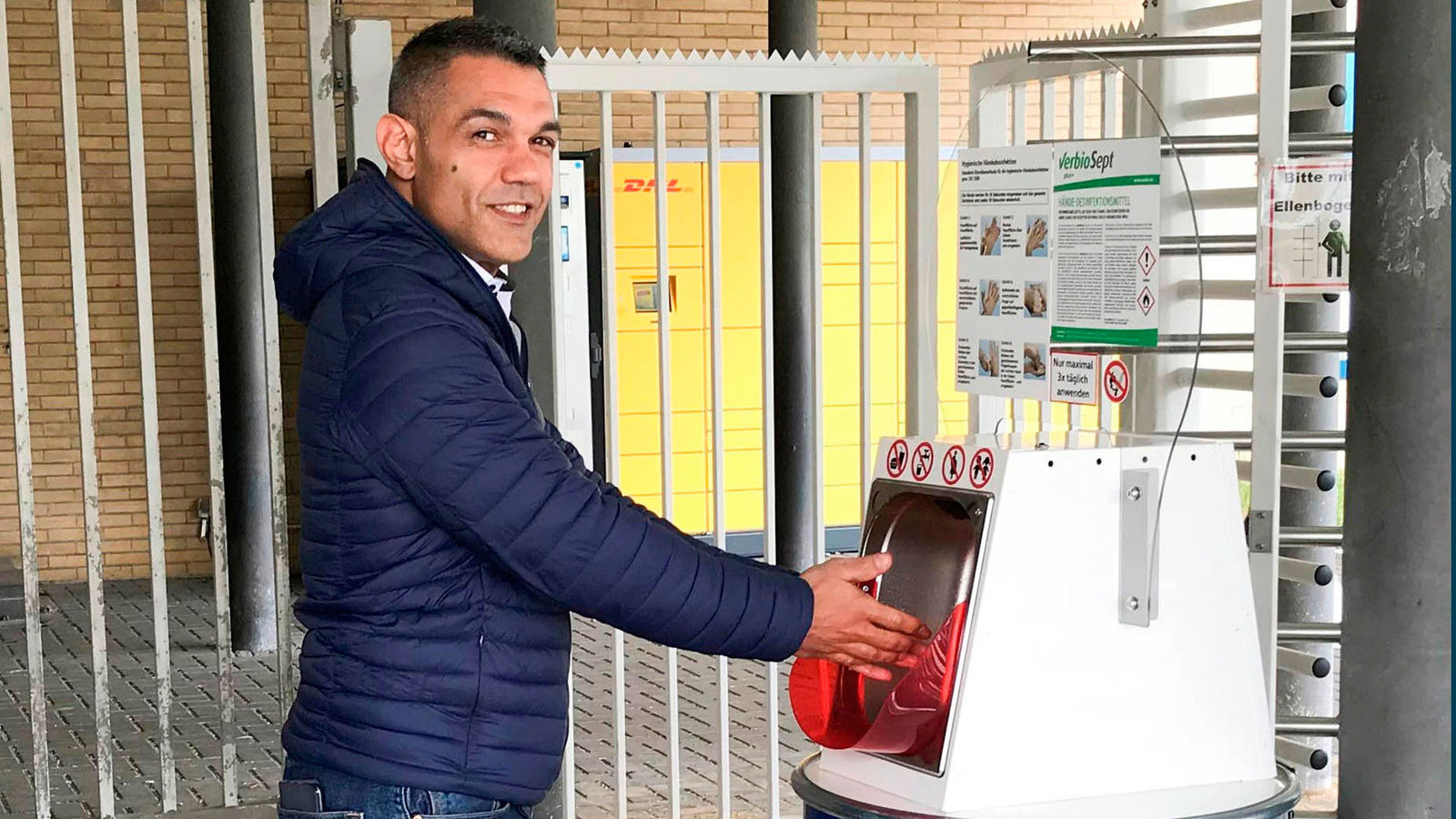 Volkswagen employees can disinfect their hands at many entrances, like here at the Braunschweig plant.

The Volkswagen employees in Emden have meanwhile left the pre-production phase behind them, and the team has long been in series production. In the meantime, the plant has even received a CE certification, says Scholz proudly. This documents its compliance with the minimum legal requirements. Up to the final inspection, including the acceptance protocol and photo documentation, there are six stages of 20 minutes each. Currently, around 100 disinfectant dispensers are built and delivered to the German Volkswagen World each week.

Be it the component plants in Kassel, Chemnitz and Salzgitter, the vehicle plants in Zwickau, Wolfsburg and Osnabrück or the Transparent Factory in Dresden – the “Made in Emden” devices are used everywhere. “That makes us a little proud that we can do our part to help contain the coronavirus pandemic,” says the production manager, before he sets off once again. The colleagues from Porsche are visiting Emden on this day. They too have expressed interest in the disinfection systems. 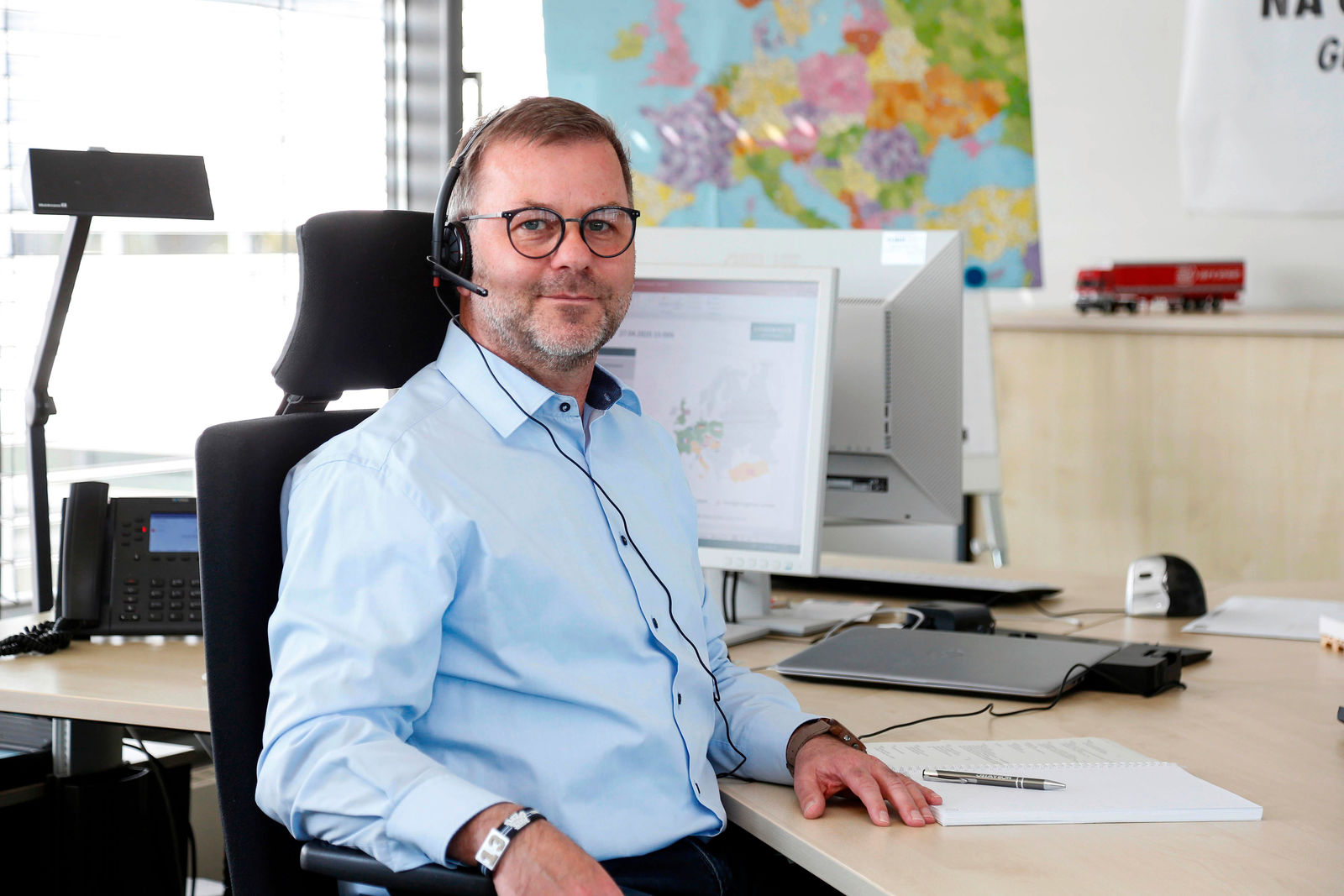 “The restart will be just as
demanding as the shutdown” 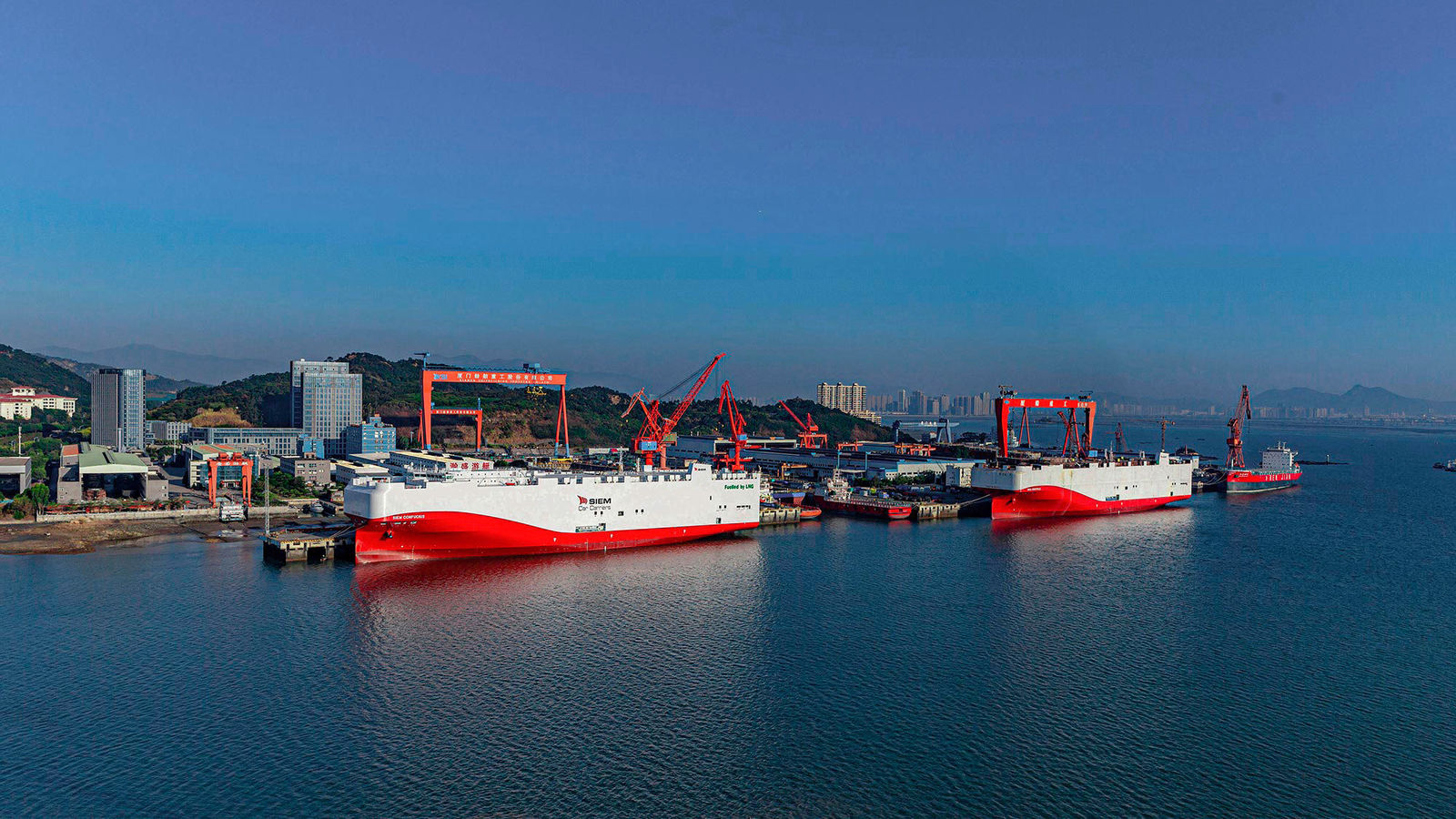 How Volkswagen is navigating
its charter ships through the crisis

“Our fight against corona
is like a long-distance race”