WeShare – the pure electric car sharing from Volkswagen – has been launched. Vanessa Petre Linbenciuc has already tried out the sustainable ervice in Berlin. A field report. 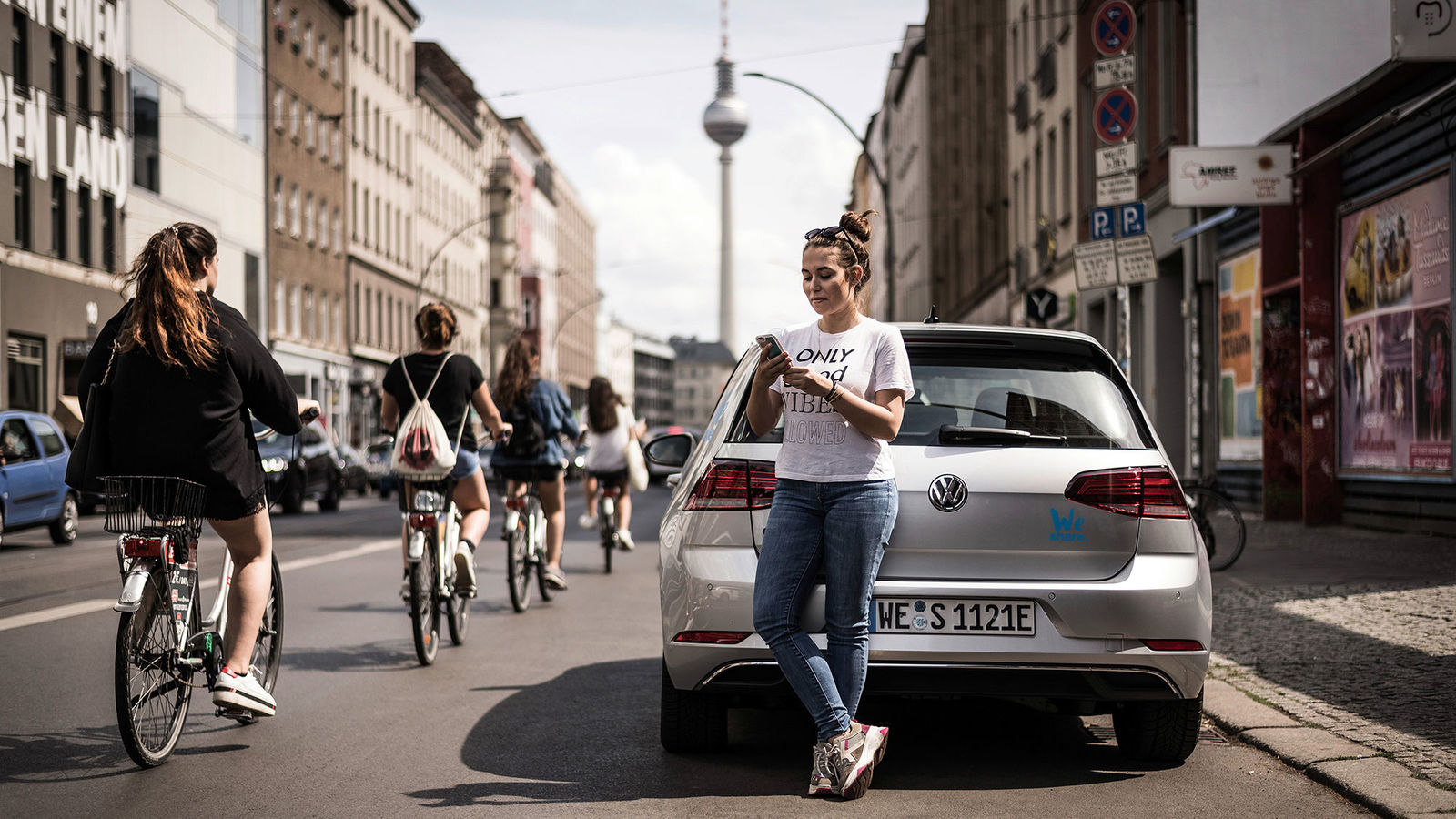 Vanessa Petre Linbenciuc in front of a WeShare e-Golf. 1,500 e-Golf were used in the test phase of Volkswagen’s all-electric car sharing service.

Vanessa Petre Linbenciuc opens the silver e-Golf with a small swiping movement on her phone. She looks into the interior: everything is clean. And the battery of the electric car is fully charged. You're ready to go!

“Here’s one of my 1,500 cars I have here in Berlin,” says the 24-year-old with a smile, puts her handbag in the trunk and adds: “That’s the practical thing about car sharing: My cars are parked all over the city – like here in the Mitte district of Berlin – and are never far away from my current location. But now let’s go, I know a nice café.”

Vanessa Petre Linbenciuc is one of 2,500 exclusive users who have tried WeShare before its official launch. So she helped to make the service fit for the start in Berlin. The test phase lasted almost two months before it really gets going at the end of June.

With WeShare, Volkswagen is launching what is known as ‘free-floating car sharing’. There are so many cars available that the customer can find one near them at any one time. “Free- floating,” means that there are no fixed collection points where cars have to be taken and returned. There are already a number of these car sharing services in Berlin. But the special thing about WeShare is that the service only offers electric cars. Electric, flexible and urban mobility of the future. 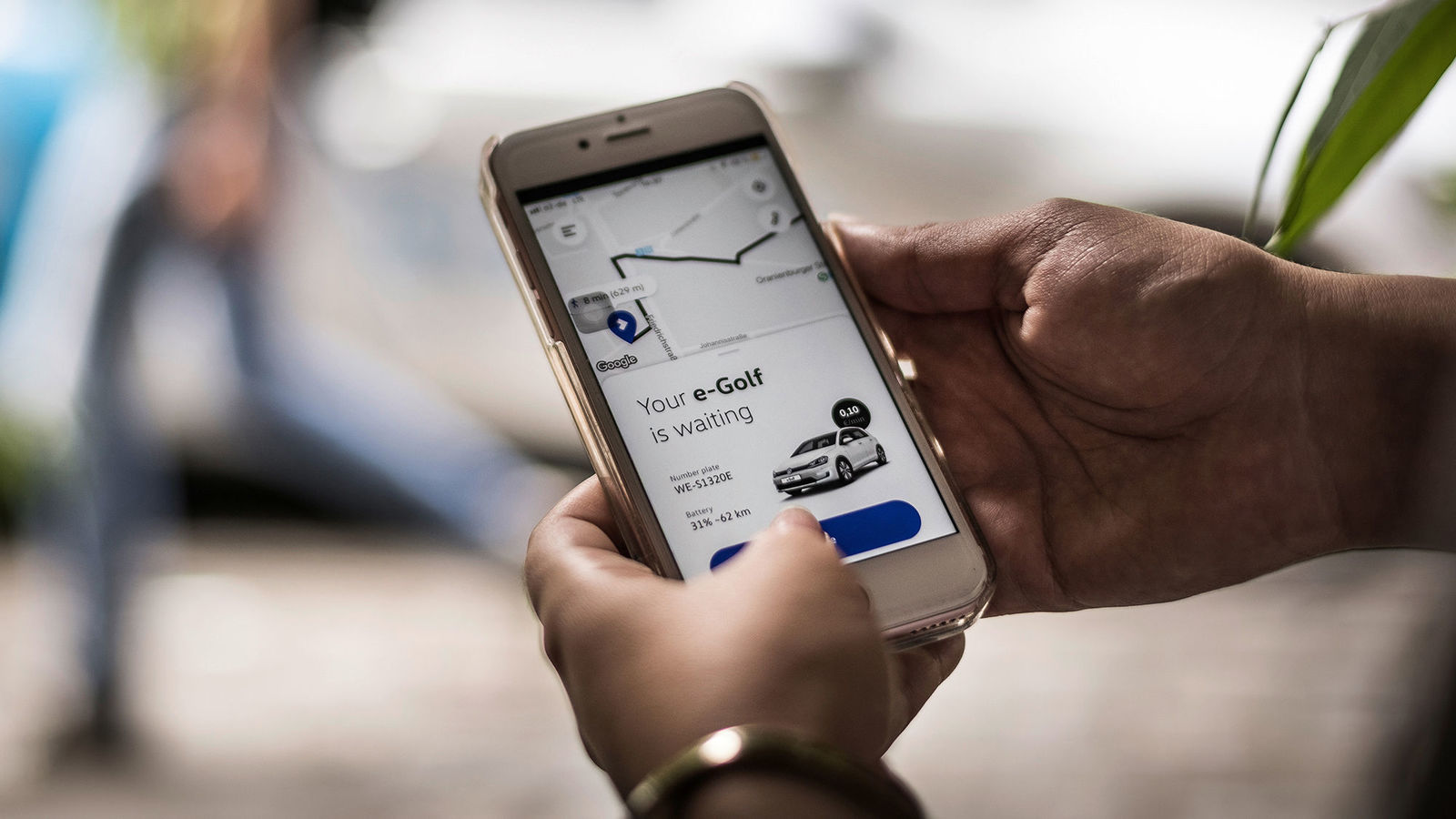 How to find your vehicle at WeShare? The WeShare app displays all available vehicles, their current parking position and the battery status. With one click Vanessa Petre Linbenciuc reserves and opens her e-Golf.

In the test phase, users were able to rent the e-Golf, and from the beginning of 2020 the e-up! will be added to the fleet. From the middle of next year, the new ID.3 will be added.

Vanessa Petre Linbenciuc received the tip to register with WeShare from a friend. He knew that she had been enthusiastically using car sharing since she moved to Berlin five years ago. “My registration went super fast because you could do it all online. I have a Romanian driver’s license, which can be quite complicated. I downloaded the app, then uploaded photos from the driver’s license and a short time later I received a short call – I was activated less than three minutes later.”

The first trip was then typically Berlin, as Linbenciuc tells us. “Another issue with the public transport network once again, the tram wasn’t driving... in addition still, rain and time pressure. I had to go to the preparatory meeting of my state examination. In such a case it is of course great to be able to switch to car sharing.”

How often did the law student use the vehicles in the test phase with WeShare? “Wait a minute, we'll have to take a look.” Vanessa Petre Linbenciuc opens the app and hands her phone over – she has to watch the traffic. Under the menu item “Trips” all tours are listed individually: She accumulated a total of 16 trips in the two months, most of them 20-30 minutes long. 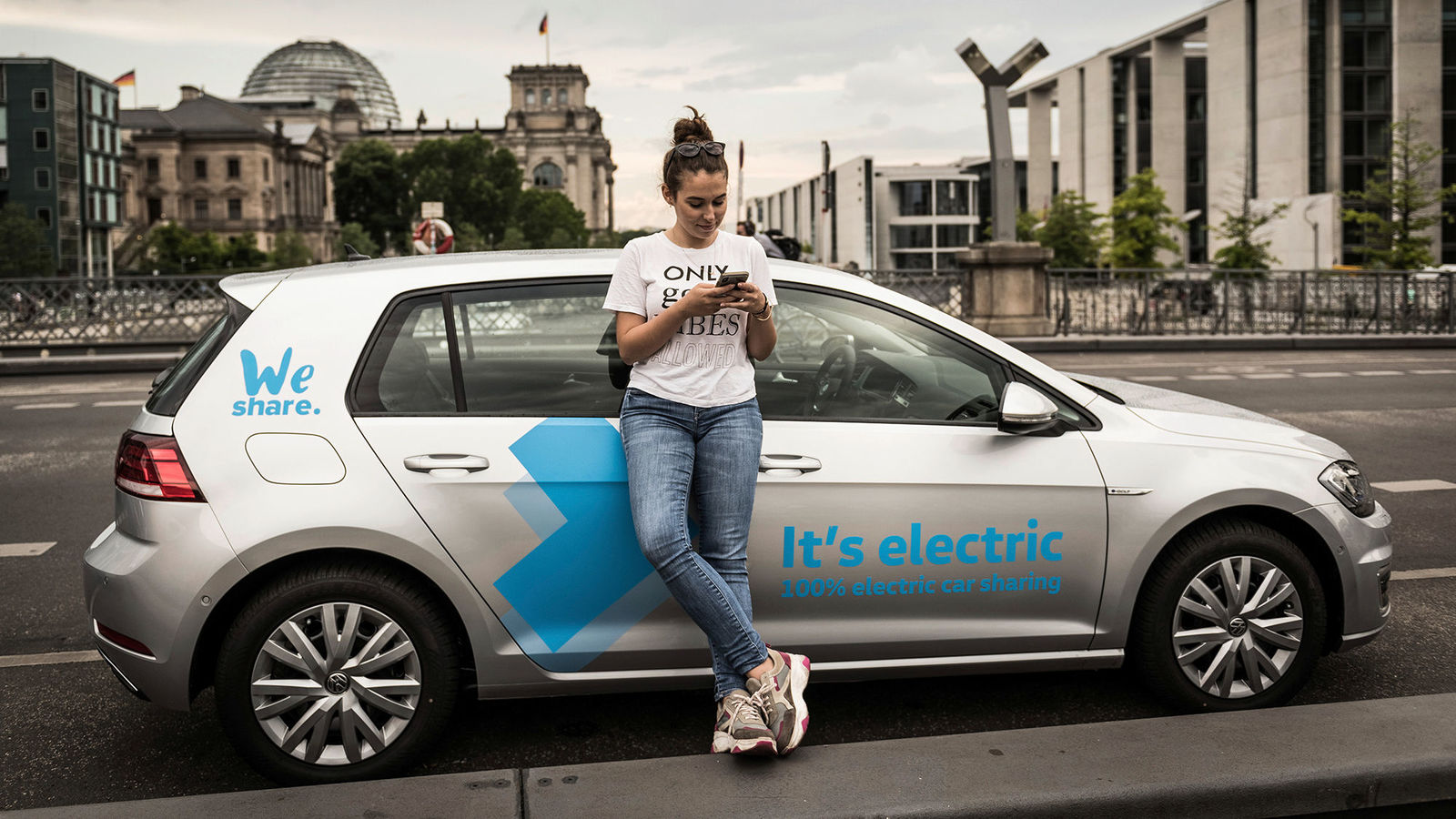 On the way through the government quarter, in the background the Berlin Reichstag. Vanessa Petre Linbenciuc used "her" e-Golf to commute in the city – especially when the weather was bad and public transport wasn’t working.

The data from Vanessa Petre Linbenciuc and all other drivers in the test phase were evaluated anonymously at the WeShare headquarters and used to optimize the service before the official start, find weak points and eliminate them. “In total, the approximately 2,500 active test drivers drove through Berlin on 67 test days,” says Ralph Philipp Reth, CEO of Urban Mobility International. UMI is a subsidiary of Volkswagen and operates WeShare in Berlin. Philipp Reth, “We have learned a lot during this time, not only about usage behavior, but also about behind-the-scenes services: charging and maintaining our 1,500 e-Golf. 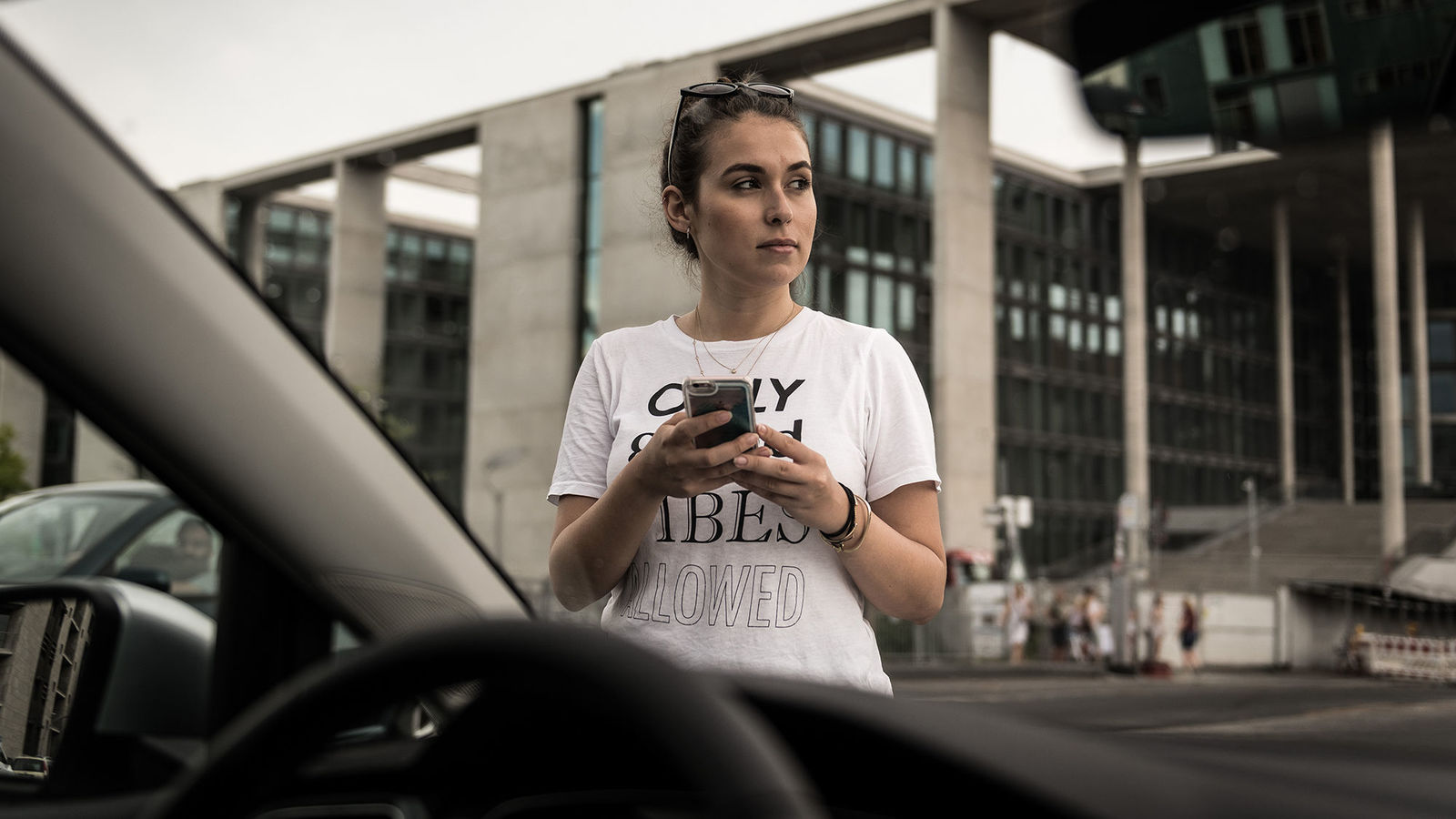 Vanessa Petre Linbenciuc has been using car sharing since she moved to Berlin in 2014. The fact that WeShare is a "zero emission" car sharing operator and only offers electric cars is a good reason for her to use the service.

For us it continues in the stop/start traffic of Berlin’s city center. Vanessa Petre Linbenciuc grabs the gear lever of “her” e-Golf and sets it to “B”. In this mode, the electric car recuperates more strongly, i.e. it converts energy back into electricity when decelerating. This means that Petre Linbenciuc no longer needs to brake herself – practical in city traffic. The battery also lasts longer and the range increases. “When I selected my car via the app, the battery level displayed there didn’t matter to me. The distances I cover are usually quite short, usually only five to ten kilometers,” explains the adopted Berliner.

But what matters to her is environmental friendliness. “Five years ago, when I came to Berlin, sustainability was not an issue in car sharing. It was more about whether you got a convertible or a two-seater. But today, with the growing awareness of sustainability, there is of course a lot to be said for WeShare.”

Suddenly Vanessa Petre Linbenciuc spotted a parking space right in front of the café she wanted to go to. “I’m really good at parking – I practiced that a lot before my third driving test,” she says – and parks in two maneuvers. She also has her own car, but it’s parked at her parents in Bucharest. “With WeShare, I don’t need my car here in the city.” 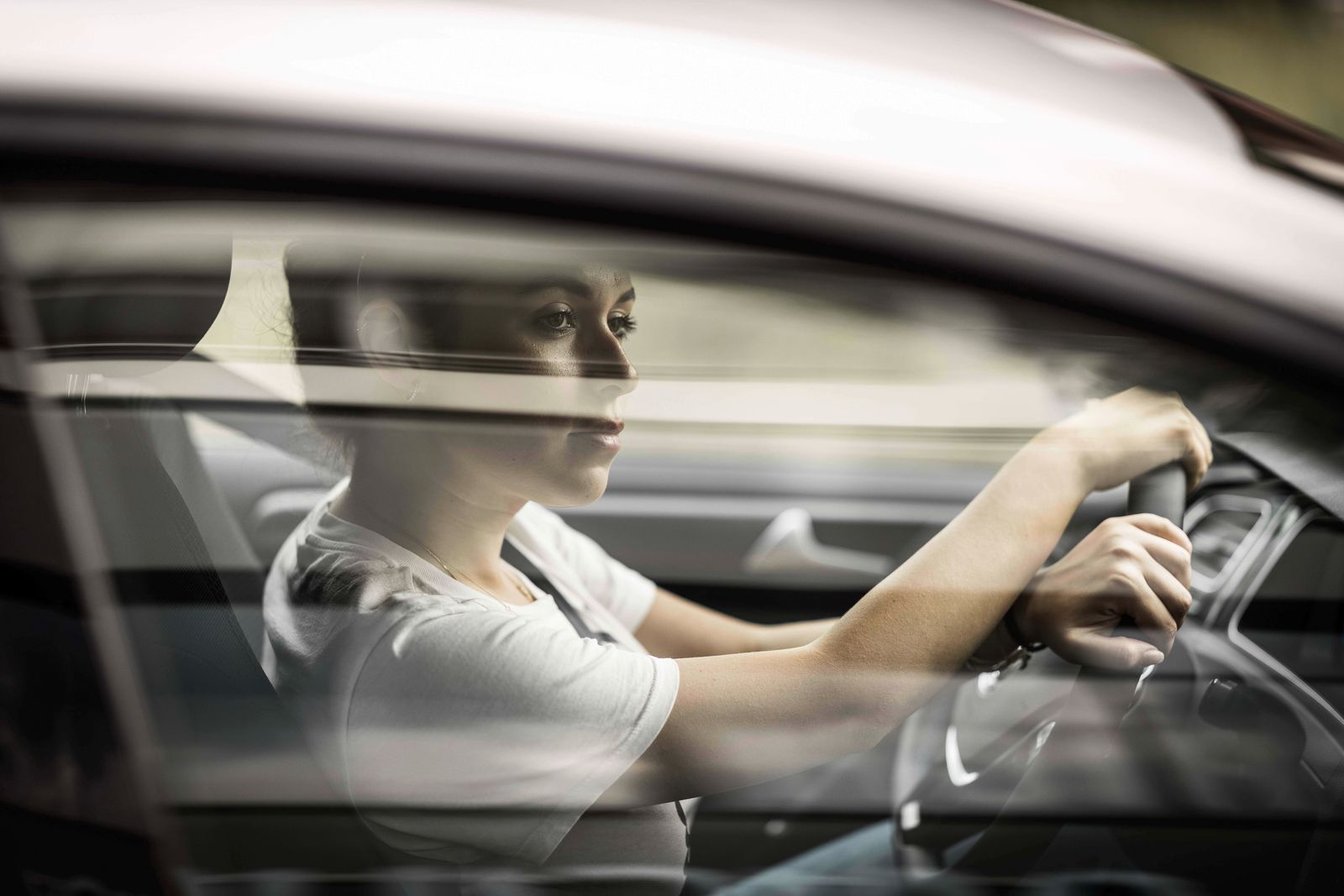 Vanessa Petre Linbenciuc at the wheel. The law student likes the fact that all cars are at WeShare are Volkswagen Golf meaning she doesn’t have to adjust to a new car every time.

The parking situation in the city center alone is a reason for Linbenciuc not to drive her own car, “I can park a car sharing car anywhere in Berlin, even if it is a resident only zone. And there are even extra parking spaces in some streets for car sharing and electric cars. That’s really an advantage.”

“Berlin offers the ideal market for car sharing due to its large population and density and has the greatest potential,” says Jürgen Stackmann, Member of the Board of Management Volkswagen Brand for Sales, Marketing & After Sales. “Many people live here who have already tried vehicle sharing out – and the number is growing all the time. After its launch in Berlin, WeShare will initially be introduced in other large cities in Germany and Europe. As a rule, the focus will be on large cities with more than one million inhabitants. Jürgen Stackmann is convinced: “The first service in the “Volkswagen We” ecosystem, which is aimed primarily at non-car owners, will be a success. 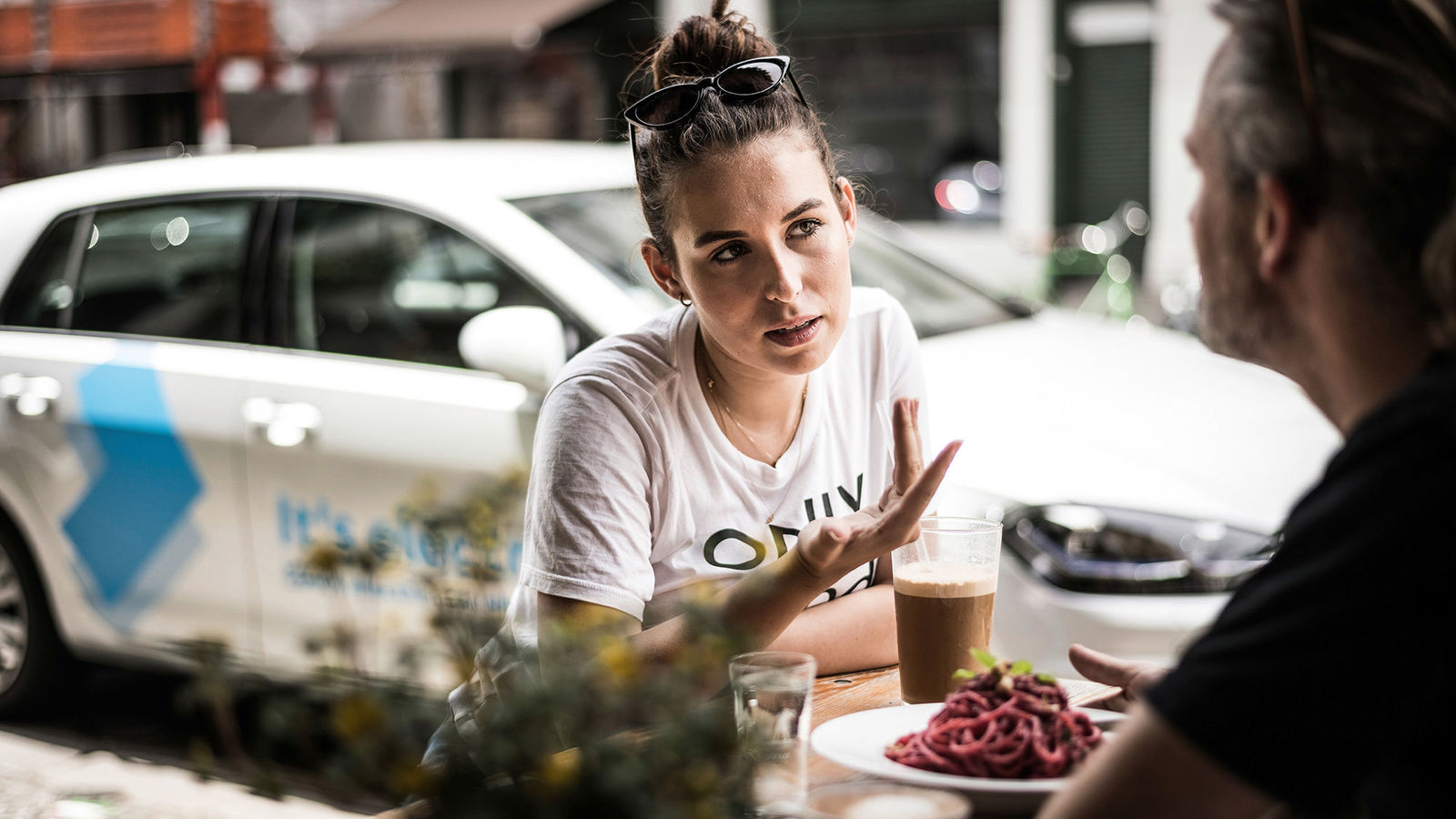 At the end of the trip in one of her favorite Berlin cafés: Vanessa Petre Linbenciuc reports about her experiences from the test phase of WeShare. In just under 60 days, she used Volkswagen’s car sharing service 16 times.

Vanessa Petre Linbenciuc does not only like being on the road electrically for environmental reasons. “I like the acceleration and the futuristic displays in the cockpit. And: “You don’t hear anything, even though the engine is on!” She parks the car and ends her session in the e-Golf while in mid-conversation using the app, which was also quick and easy. The initial first wave WeShare customer looks satisfied. Nevertheless, she still has wishes for the future: “I would like it if I could buy time packages – then I would probably go to the lake with WeShare without having to worry, as the clock ticks by every minute.

Then Vanessa Petre Linbenciuc looks at her watch, the next appointment is already waiting for her. Now all she has to do is decide how to get to her next destination: by public transport, by foot – or once again with the e-Golf parked behind her? She smiles, her decision has probably been made.

Under the WeShare sub-brand, Volkswagen is introducing a comprehensive, pure electric car sharing service in selected cities. The first fleet of vehicles will be launched in the German capital of Berlin – initially comprising of 1,500 e-Golf during the beginning of the service, followed by an additional 500 e-up! from 2020 onwards – and later on in the year the fleet will be successively converted to the first models of the new Volkswagen ID. family. Jürgen Stackmann, Member of the Board of Management for Sales and Marketing of the Volkswagen brand: “We want to get young urban users excited about e-mobility. With our ‘WeShare’ car sharing offer, we will first electrify Berliners.”

What is Volkswagen We?

Volkswagen WeShare is part of the “Volkswagen We” ecosystem. The company plans to invest 3.5 billion euros in digitization by 2025, making the car the central hub of the Internet of Things. “We have a clear vision: we remain manufacturers of superior vehicles. But in the future, our Volkswagen will increasingly develop into digital devices on wheels,” said Jürgen Stackmann, Member of the Board of Management for Sales and Marketing of the Volkswagen brand. In addition to WeShare, Volkswagen already offers customers: WePark, the park app with integrated billing; WeDeliver, parcel delivery to the trunk and WeExperience, personalized offers and recommendations close to the location of the where the vehicle is parked. 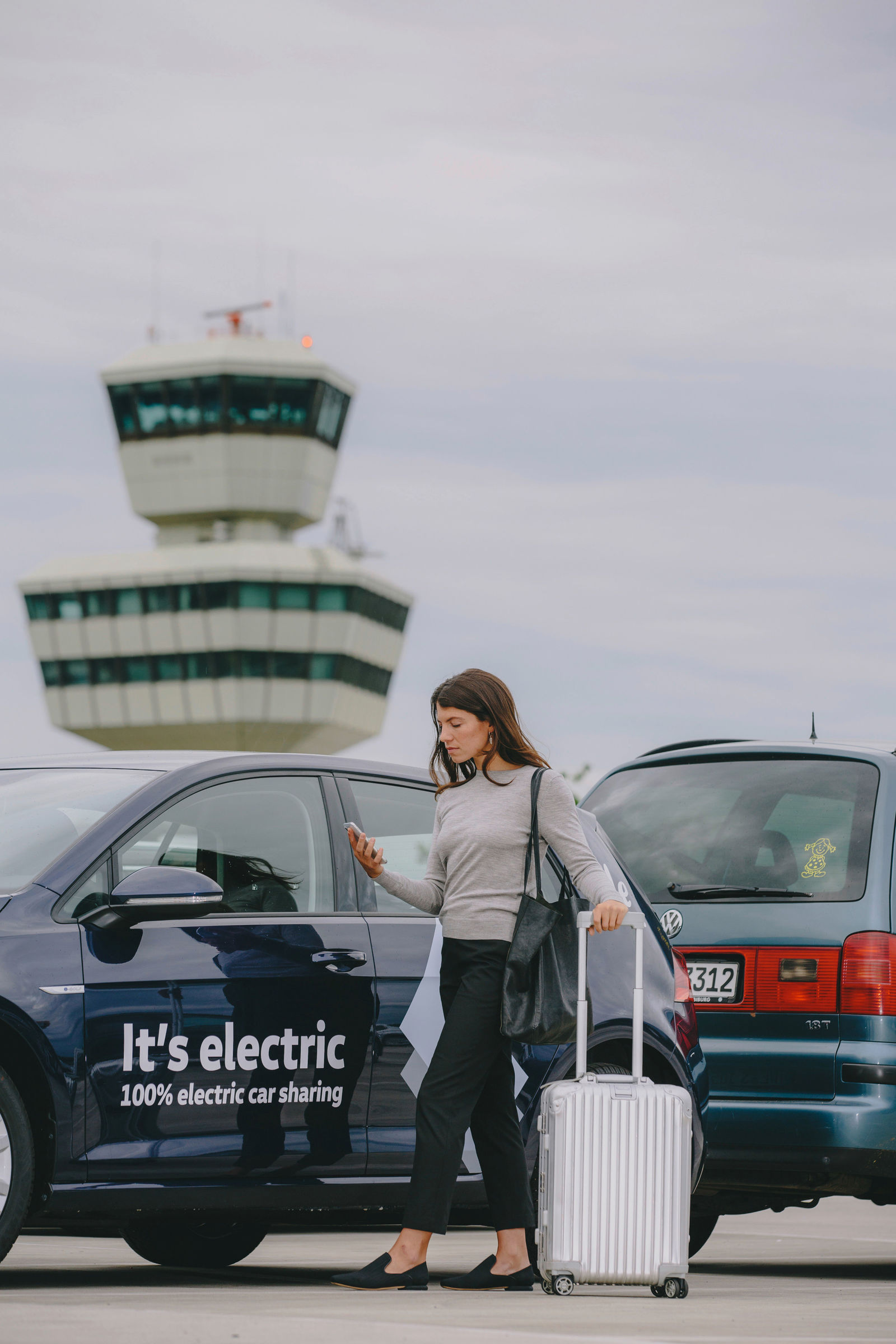 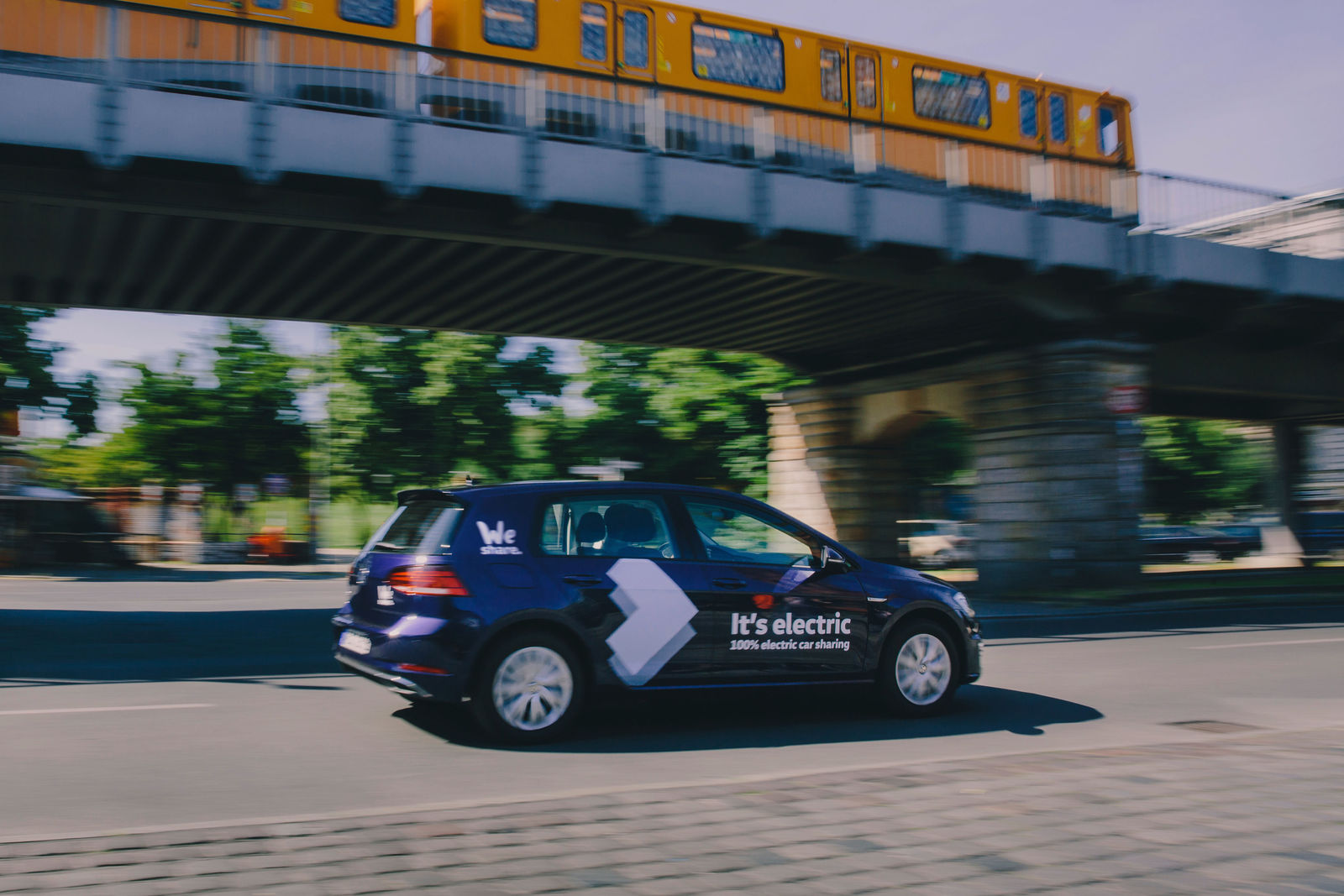 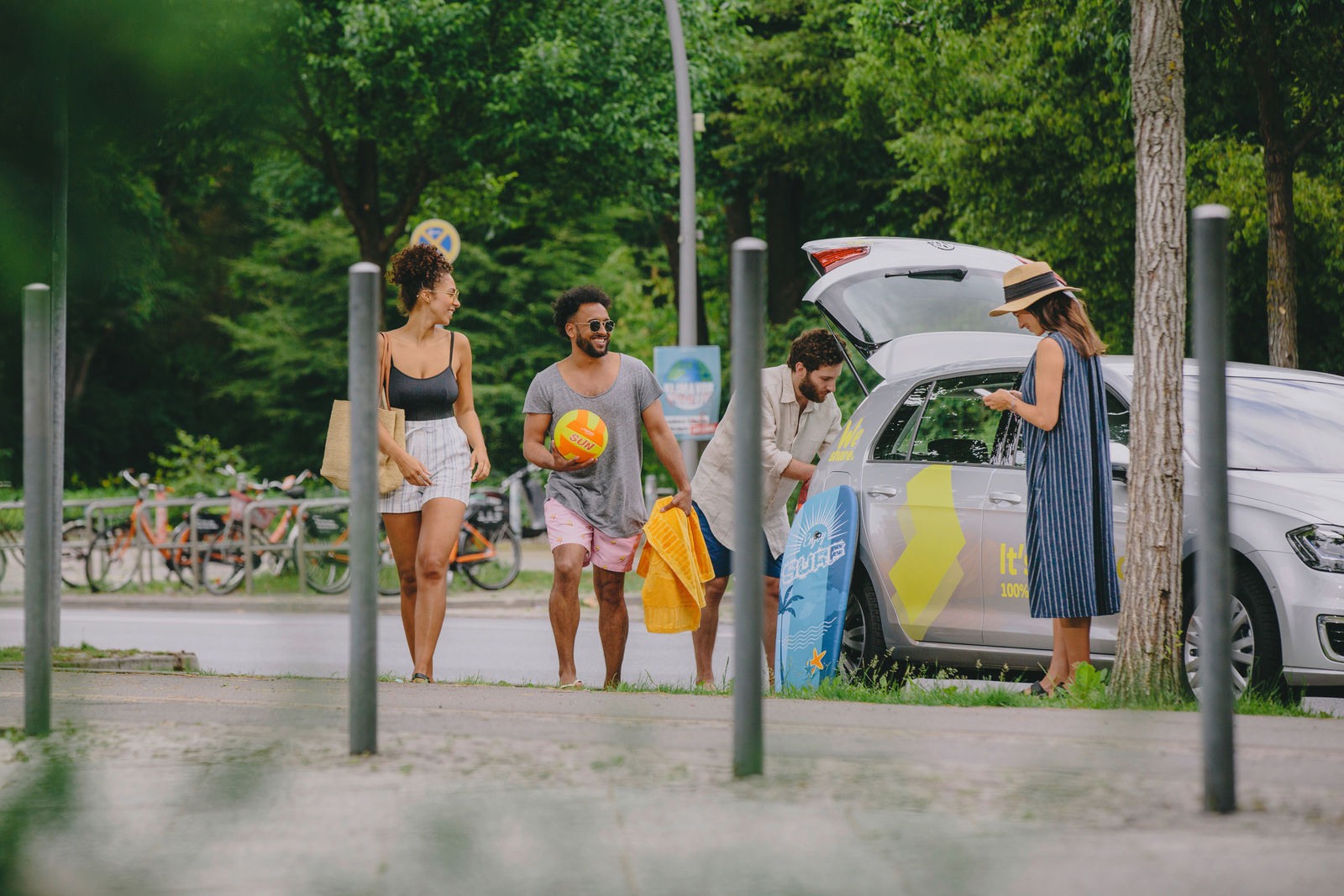