Innovations have to have a human touch 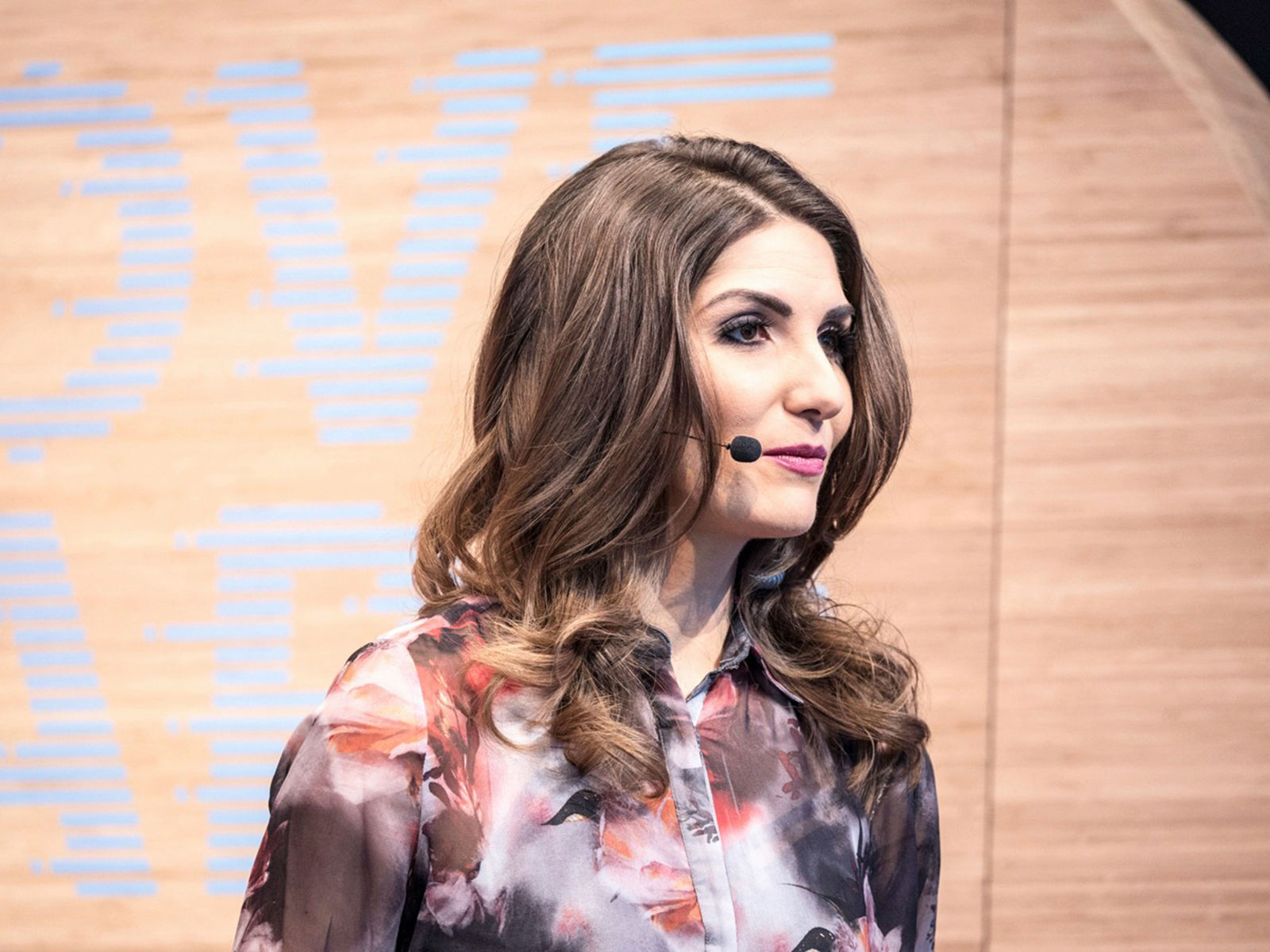 The Motor Show in Geneva is open for visitors until Sunday. The Volkswagen booth presents its Volkswagen Move Forward talk every day. Experts answer questions on the future of mobility, the future in the digital world, and intelligent driving solutions in the future.  Presenter, Sarah Elsser, describes her personal experience of the talks at the Volkswagen exhibition booth to us here.

"I was one of the last people to get a mobile phone. My friends had more than 500 Friends on Facebook before I'd even clicked on the button to register. The new smart TV stood in the hall unpacked for an entire two weeks after my beloved old television set had breathed its last breath. No, I couldn't be mistaken for staying ahead of the crowd, or being an early bird, so to speak. I'm all for the simple life. And of all people, it's me who's presenting "Volkswagen Move Forward" in Geneva, the new talk format which addresses the issues of future mobility and digital services in our everyday life! I'm not joking ... and it was all your idea!

Before anybody starts to doubt Volkswagen's decision-making ability, I did actually specialise in the area of future mobility. Why? This is where the bird comes into it. Anyone who paid attention in biology will remember the story of Darwin. The theory of evolution. Birds, who grew different kinds of beaks so that they could inhabit all of the niches in a tree. My niche is called curiosity. I'm convinced that we're all part of a big digital and mobility evolution – whether we're aficionados of old television sets or not. The world changes at a breath-taking pace. I've been at the centre stage of this development for over a week now at the Geneva Motor Show. Electric cars, drones, bicycles, mobile services in the car, virtual worlds. Darwin would immediately pull out his pen and a piece of paper. Or a smartphone app. 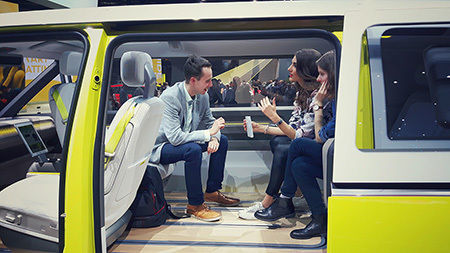 Anna and Franz from Aschersleben in the ID. BUZZ.* 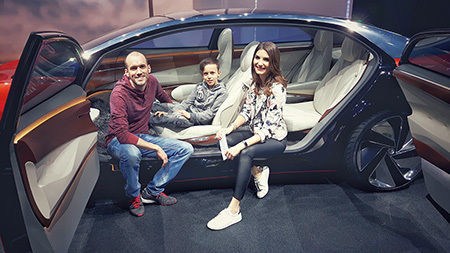 Reto and Tim from Thun in the ID. VIZZION.*

I take a seat with Tim and Reto in the I.D. VIZZION. A father-son outing, a feel of the future. I'm really surprised to hear that they both feel the same way as I do. "I don't want to end up being just a passenger, and for technology to have control over people. I want to be able to choose. I think technology's great, but I love classic cars – for me, the future has to offer both", Reto says. His son Tim agrees. "My dad should drive; he's a really good driver". Whilst trying out the seats in the I.D. VIZZION, I hear him say "hönnä guet". Thanks to an app, I later find out that "hönna guet" means "dead cool" in Swiss German.

The big future trends
Clear trends for the future are electric mobility, individual mobility, autonomous driving and digital services. Everything is geared in this direction. As far as the Volkswagen booth is concerned, I mean this literally, since all paths lead to the I.D. models of the visionary electric family. So these will provide me with individual mobility in the future? My car will recognise me as its driver. It will adapt the lighting to my mood, be completely electric and – as a vision for the future – even take me from A to B without a driver, with always-on connectivity and fully equipped with the apps of my choice. Of course, the 500 Facebook Friends I've collected want to communicate with me on longer journeys too. Sounds promising. Even for a digital late comer like me. But still ... it's a strange feeling to think that I'll only be a passenger and that technology will control the vehicle – even if the I.D. VIZZION makes me feel like I'm sitting in my own living room. There it is again, the thing with habits and trends. It's a dilemma. Am I the only one that feels this way? 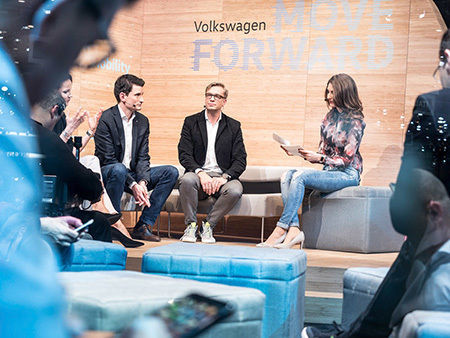 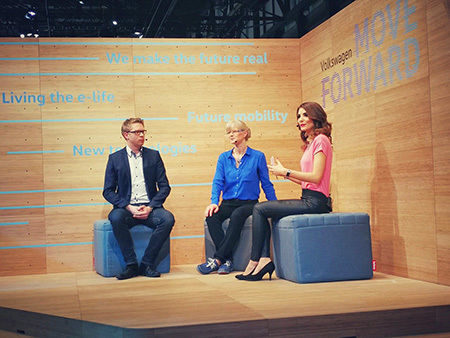 But I also see that all this technology is leading above all to a greater goal: communication. This accessible and human way of presenting technical innovations is in fact also an aid to technology in the end: only products that we, the customer, really understand and really want, are the ones which will invade the market. During the talk, Florian also explains to us that we customers can literally help to develop products – by providing feedback, which he and other Volkswagen experts analyse, sometimes with psychologists, and then use to optimise applications. What a relief! And how amused the spectators and I were when Anja, the expert for intelligent driving, recounts her first ever experience with the automatic parking assistant. "I was one of the first people at Volkswagen to be allowed to try it out. And I had to sit on my hands to stop myself from touching the steering wheel!" Yes, progress takes time. And trust. But the series of talks in Geneva make us realise that there are humans behind all of these technical innovations in the end. People who feel like we do, people who understand us. People who all love their little old television sets at heart.

I also meet visitors in the I.D. BUZZ who, like me, are caught in the dilemma of trend versus habit. Anna and Franz both agree: electric mobility is essential for the future. It's about sustainability. However, Franz still wants to be able to hear the sound of a combustion engine in future. "Emotions are important to me, above all else – a car has to stay a car!", exclaims Anna. I know that she means.

Digital evolution through communication
Whilst talking to visitors, I keep coming back to the same thought that we all have our own ideas about what this technology will do to us and our lives. Speaking on everyone's behalf, I've been able to interview the Volkswagen experts about our concerns and thoughts for a week now. Open. Honest. The "Volkswagen Move Forward" talk format is aimed at one thing: about improving awareness. Understanding about how new technologies can make everyday life easier. Making a contribution to safer travel. Many visitor's faces light up at this. Realisation. Surprise. Anticipation. Indeed, several female visitors give their husbands a poke in the side when Yannick describes the "We Deliver" service which enables online orders to be delivered directly to your own car. No long queues at the post office any more. No more bothering the neighbour with piles of parcels. Sorry old television sets, that's simply too cool! 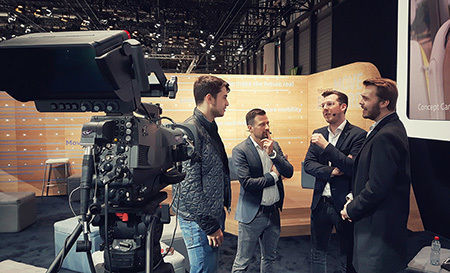 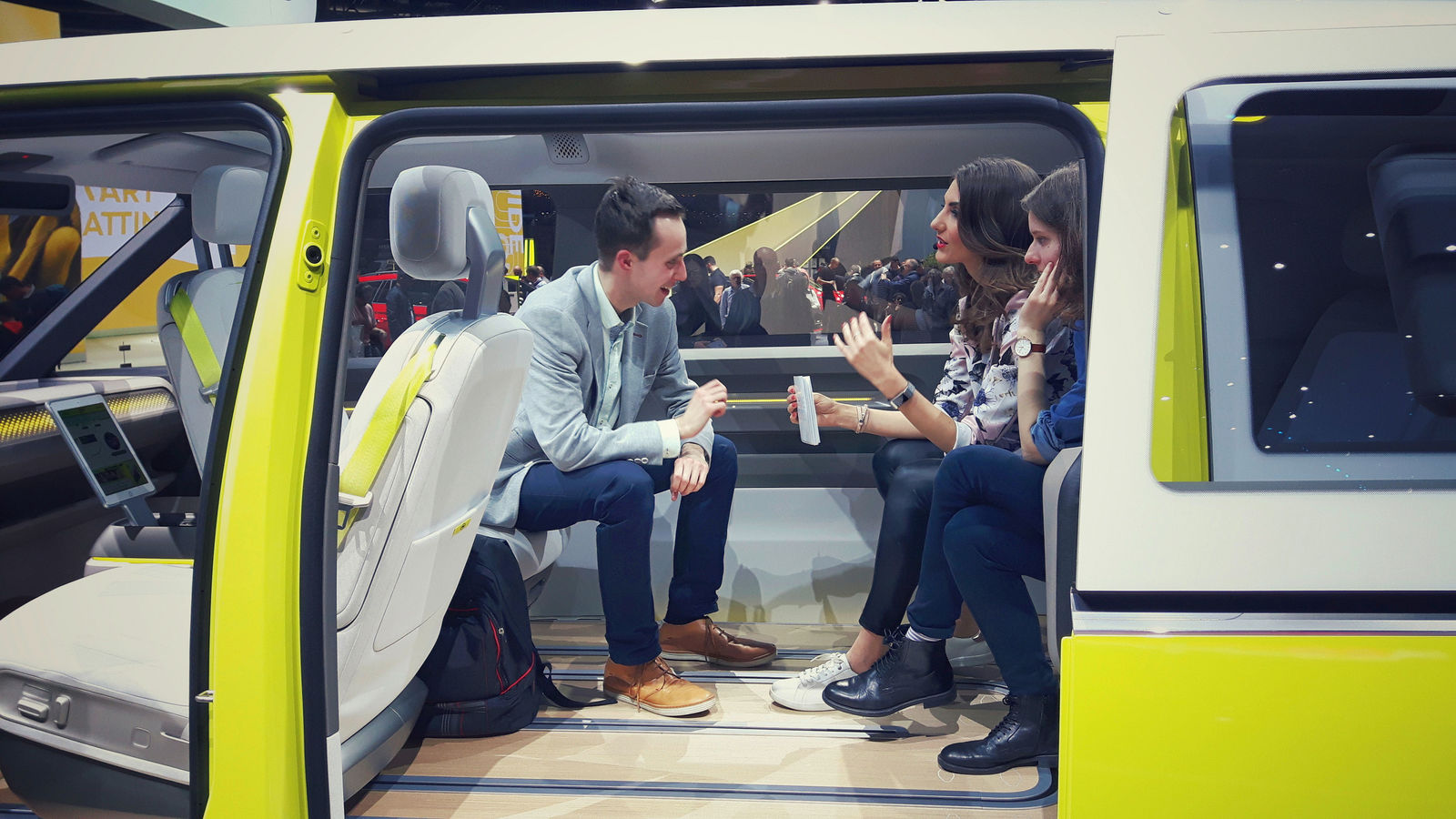 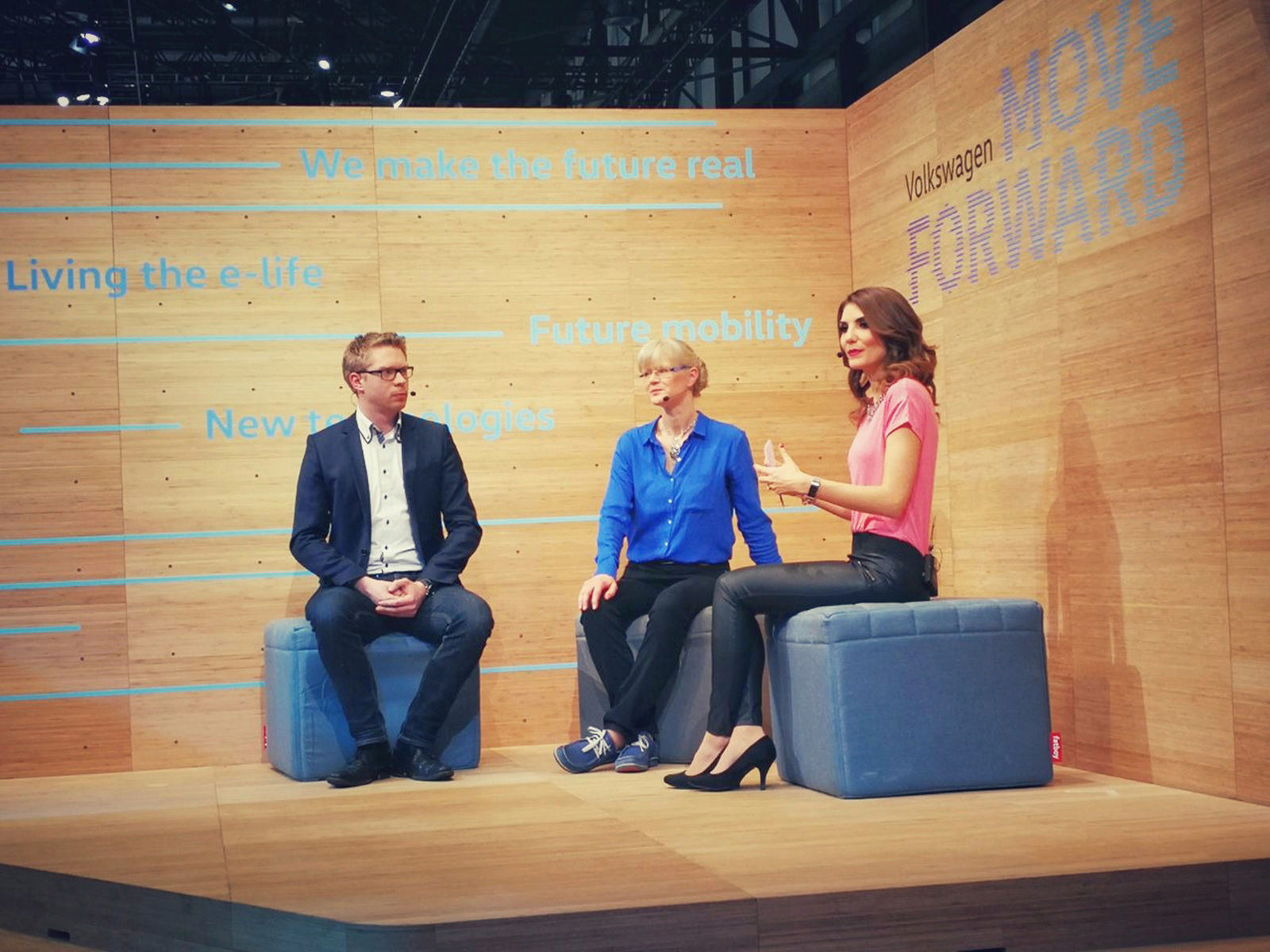 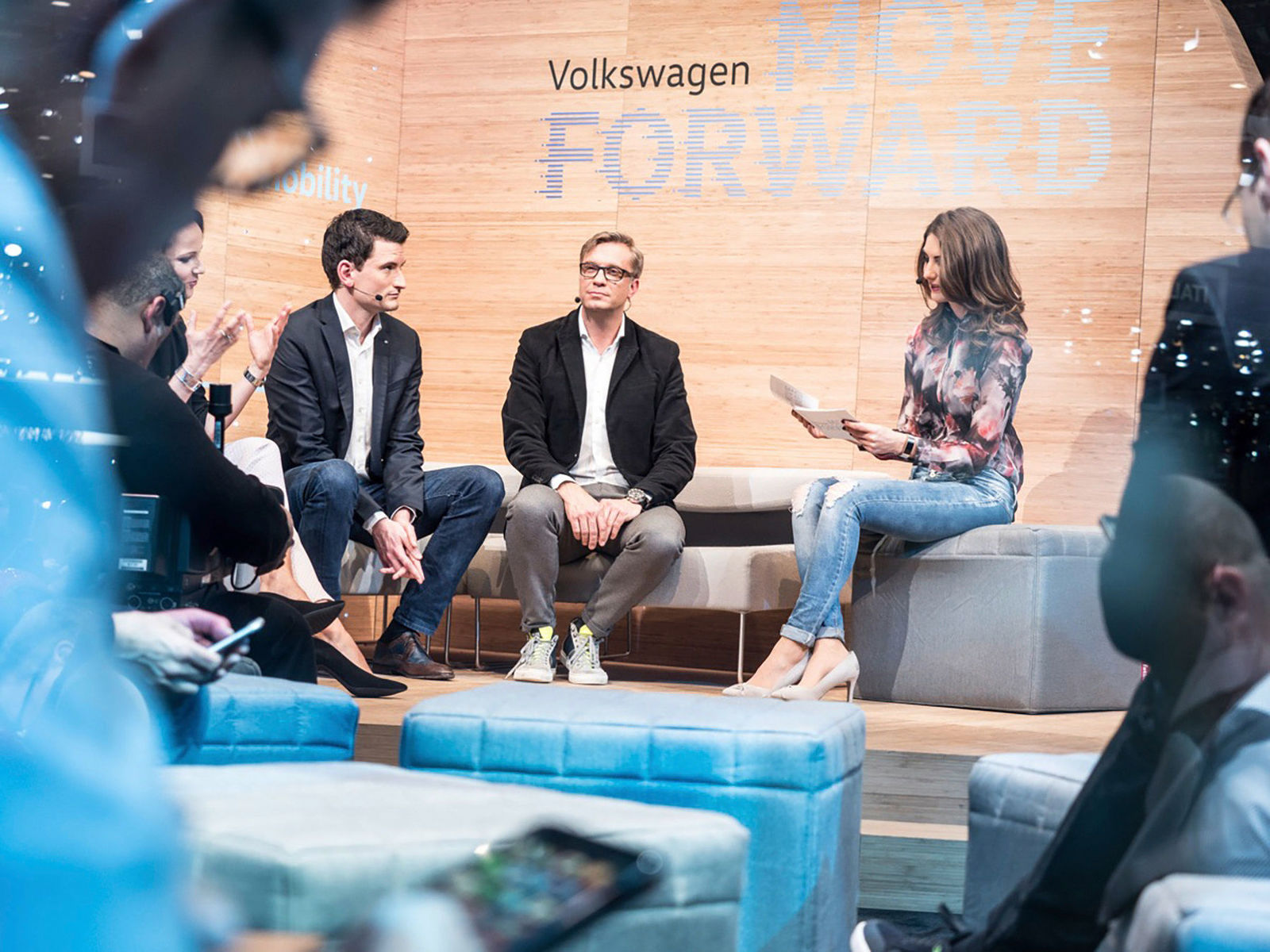 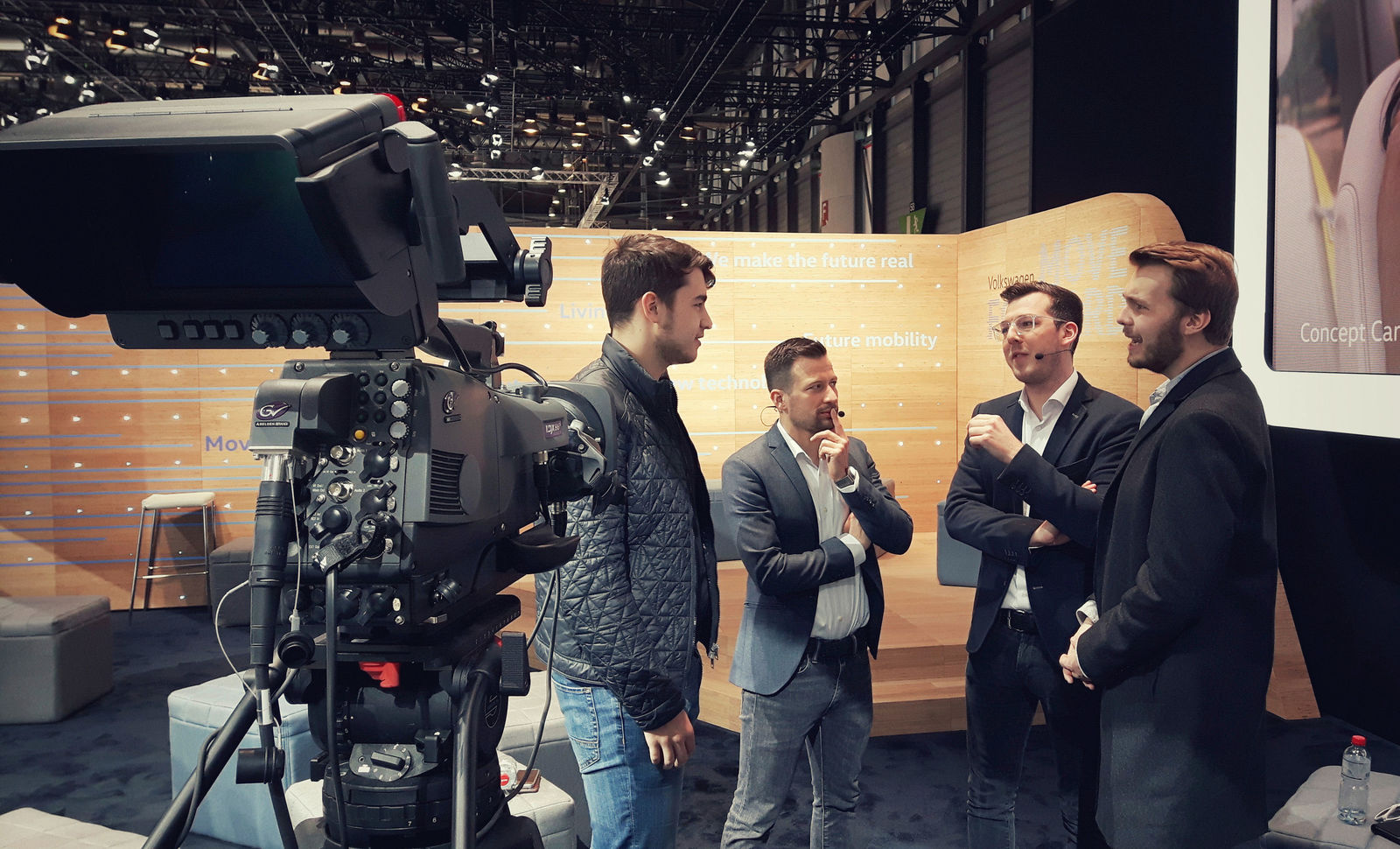 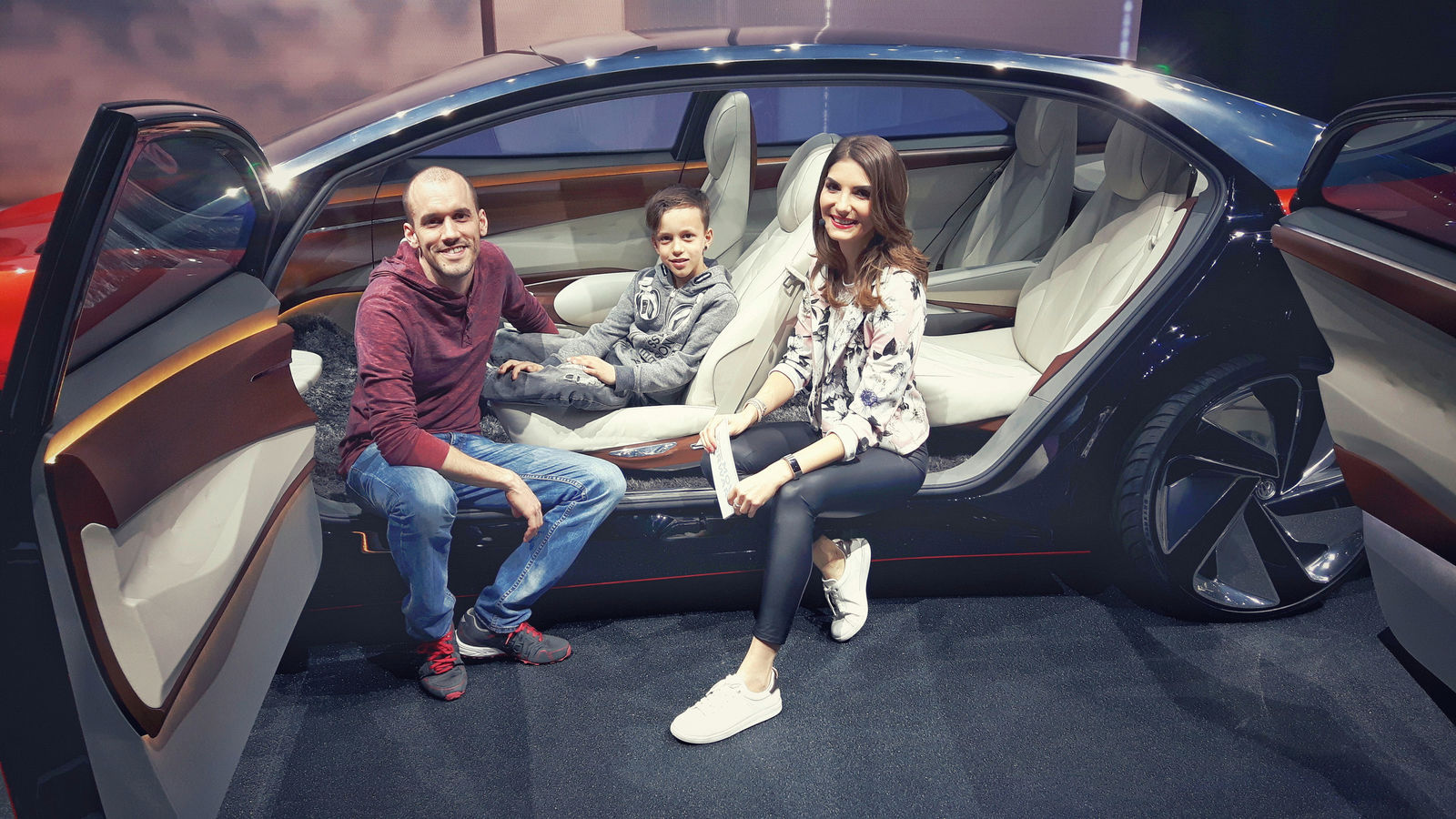