From springs and dampers to rotors and stators

In the coming days, the production of essential components for the new ID.3 will commence at four Volkswagen factories. We explain which parts Volkswagen Group Components builds and where they are produced. 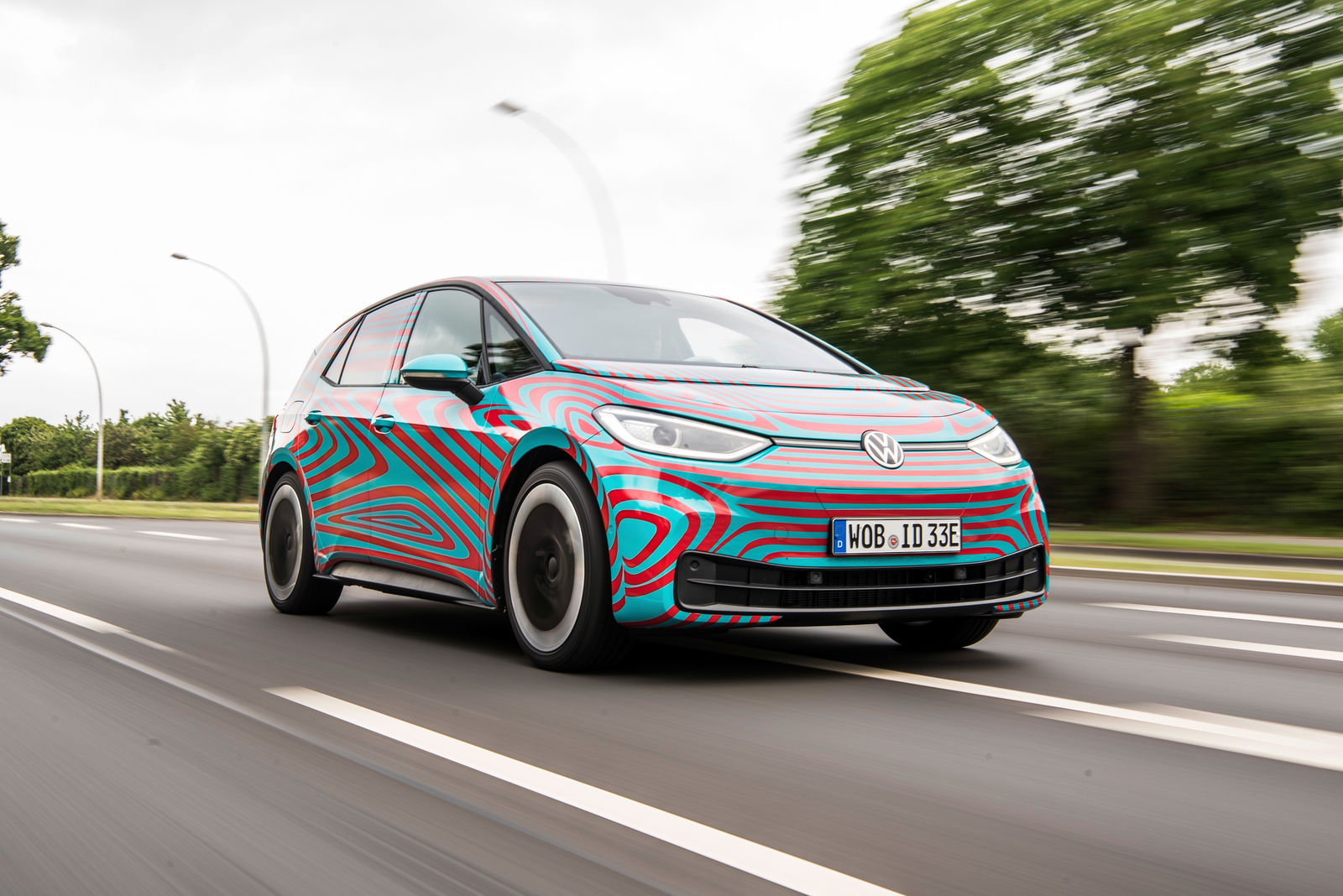 Production of ID.3 will start at the end of the year in Zwickau, Germany.

Preparations for the start of ID.3 – the first all-electric Volkswagen for the E-era – are in full swing. The world premiere is scheduled for September at the IAA in Frankfurt with production beginning at the end of the year in Zwickau, to which the participating plants of the Volkswagen Group Components will make important contributions. Production at these plants will begin in the next few days.

While Volkswagen’s main location in Wolfsburg designed and developed the Modular Electric Toolkit (MEB), the drive shafts and tests the range and performance, the three plants in Brunswick, Salzgitter and Kassel produce important components for the electric car. The battery system is manufactured in Brunswick, and the electric drive in Kassel, for which the Salzgitter plant supplies the stator and rotors.

Base+ on the rear axle

With the ID. family, Volkswagen makes e-mobility possible for the masses. The e-drive system plays a decisive role here. It is called Base+ and will power all vehicles of the ID. family in Europe and North America in the future. A special feature is that it is not located in the front of the vehicle, but integrated into the rear axle. Base+ will be assembled in Hall 1 of the Kassel site, where various engine components such as the rotor and stator will be assembled from components manufactured at the Salzgitter, Poznań and Hanover component plants.

Production of Base+ for the pre-series has recently begun, with around 1,000 employees working on final assembly. In future, around 2,000 units will be produced every working day, which corresponds to around 500,000 units per year. Together with the Tianjin components plant in China, Volkswagen Group Components will produce up to 1.4 million units per year from 2023 onwards. This makes the company one of the world's largest manufacturers of electric drives in the future. 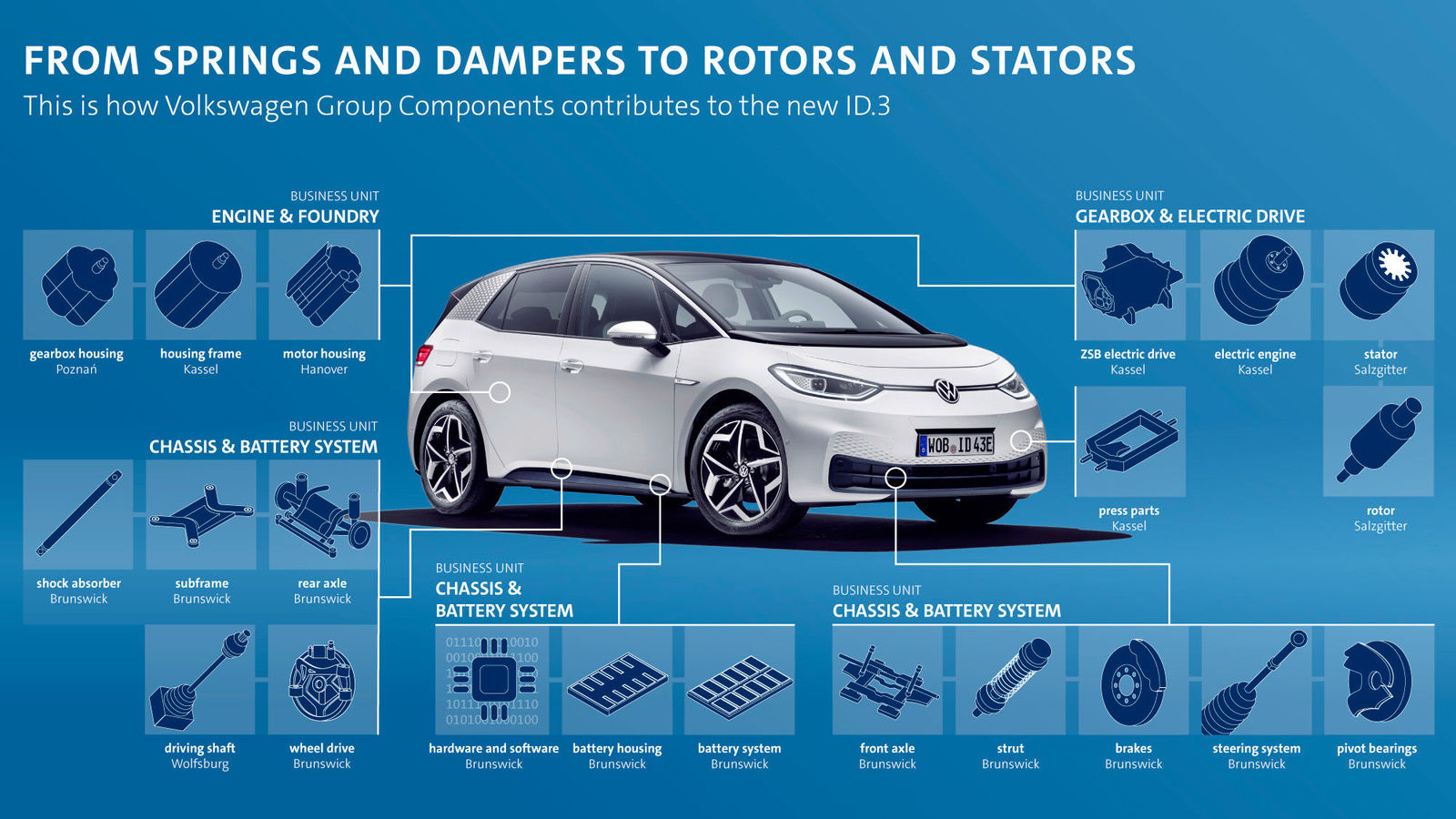 Volkswagen Group Component supplies these parts for the ID.3

Chocolate bar for the e-era

It looks like a chocolate bar and is one of Volkswagen Group Components future products at their Brunswick location: the MEB battery, developed there. It is the heart of the new ID.3 and weighs up to 460 kilograms. At peak times, around 500,000 battery systems per year will be delivered from Brunswick to Zwickau. Over 200 employees will manufacture the battery housings and systems, and more than 100 employees will also work in planning and development.

Battery competence has been built up at the Brunswick components site since 2013 – among others things, battery systems for e-up!, e-Golf, Passat GTE and e-Crafter as well as for Scania and MAN trucks are produced here. For the MEB battery system belonging to the ID.3, a new hall the size of around nine football pitches was specially built. The first pre-series battery systems for the ID.3 were recently successfully delivered to Zwickau.

In addition to core elements of the electric drive and battery, the locations of Volkswagen Group Components manufacture other central platform parts for the new ID.3. In Kassel, for example, load-bearing components for the MEB are pressed by hot forming, which are processed into finished body parts in the company’s own body shop. In addition to parts for the ultra-strong frame of the battery box, the damper mounts, cross members and the tunnel are assembled here; prototype production is already running at full speed.

The Brunswick plant manufactures the front and rear axles (axle assemblies) including the chassis components – including the welding assemblies and steering systems, but also the drive shafts from the Wolfsburg chassis plant. In parallel, Salzgitter will take over the production of the stator and rotor, two central components for the electric drive system. These are electromagnets through which current flows, which in turn causes the rotor to rotate. A 19-member start-up team is already producing parts for pre-series production.

In future, Volkswagen Group Components will produce up to 500,000 stator and rotor units per year in Salzgitter. In order to achieve such high quantities, an innovative Hairpin technology will be used in stator production to ensure optimized performance data with shorter production times.

The Volkswagen Group Components plants produce a mix of location specializations and simultaneous integrated production in order to leverage synergies and make full use of specific know-how. The Center of Excellence (CoE) in Salzgitter is also building up sustainable battery cell expertise for the entire Group, whose pilot line for cell production is about to go into operation. The opening of a pilot plant at the Salzgitter location is also planned for 2020, in which not only batteries will be recycled, but also recycling processes for high-voltage batteries will be further developed.

With the help of this production strategy, Volkswagen is consistently heralding the start of its comprehensive electric offensive with the ID.3. Over the next ten years, Volkswagen Group will be launching 70 pure electric cars onto the market. ID.3 is the first model of a new e-generation with which Volkswagen not only assumes responsibility for global climate protection, but also sets the course for a successful future for the company. 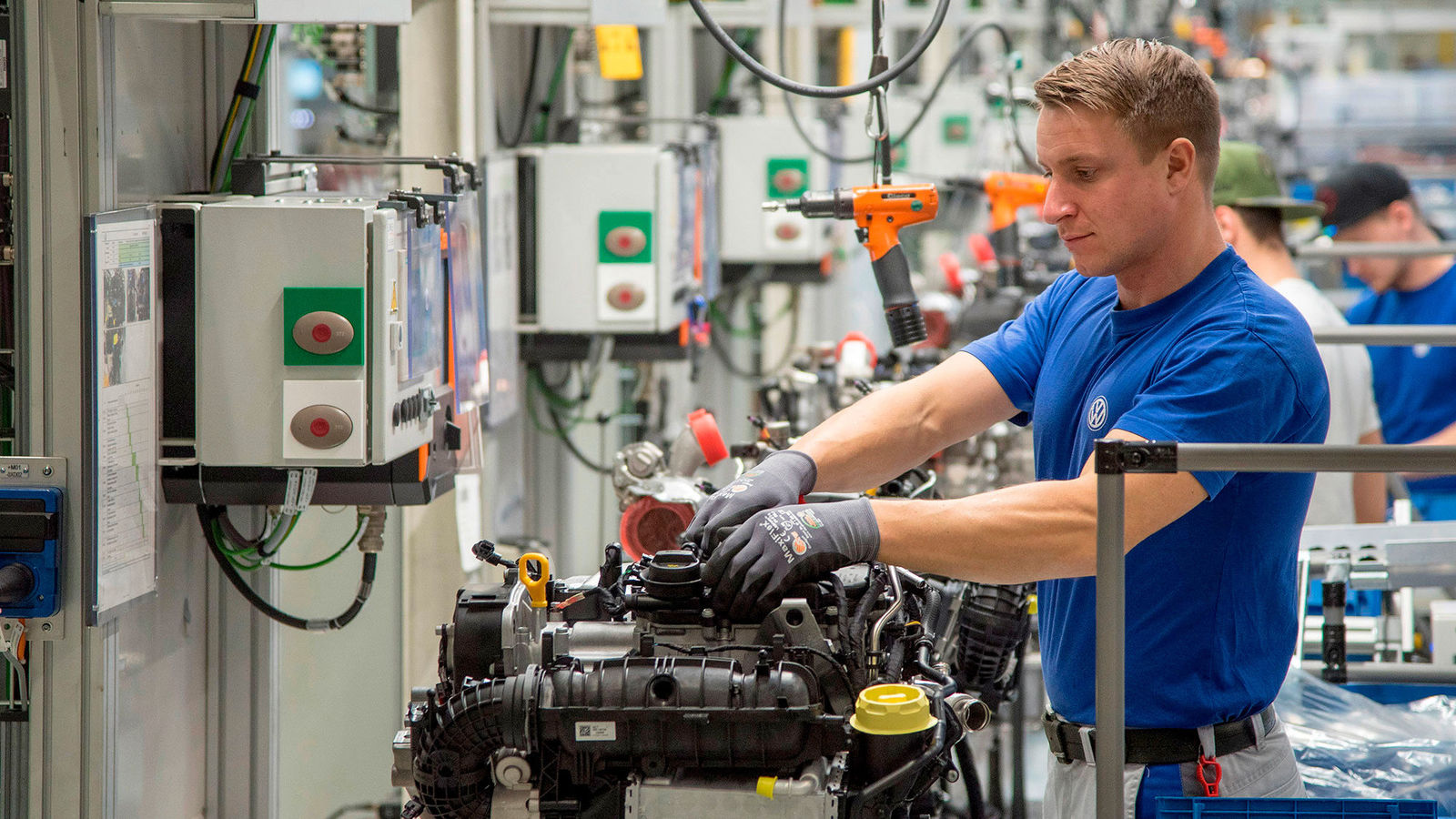 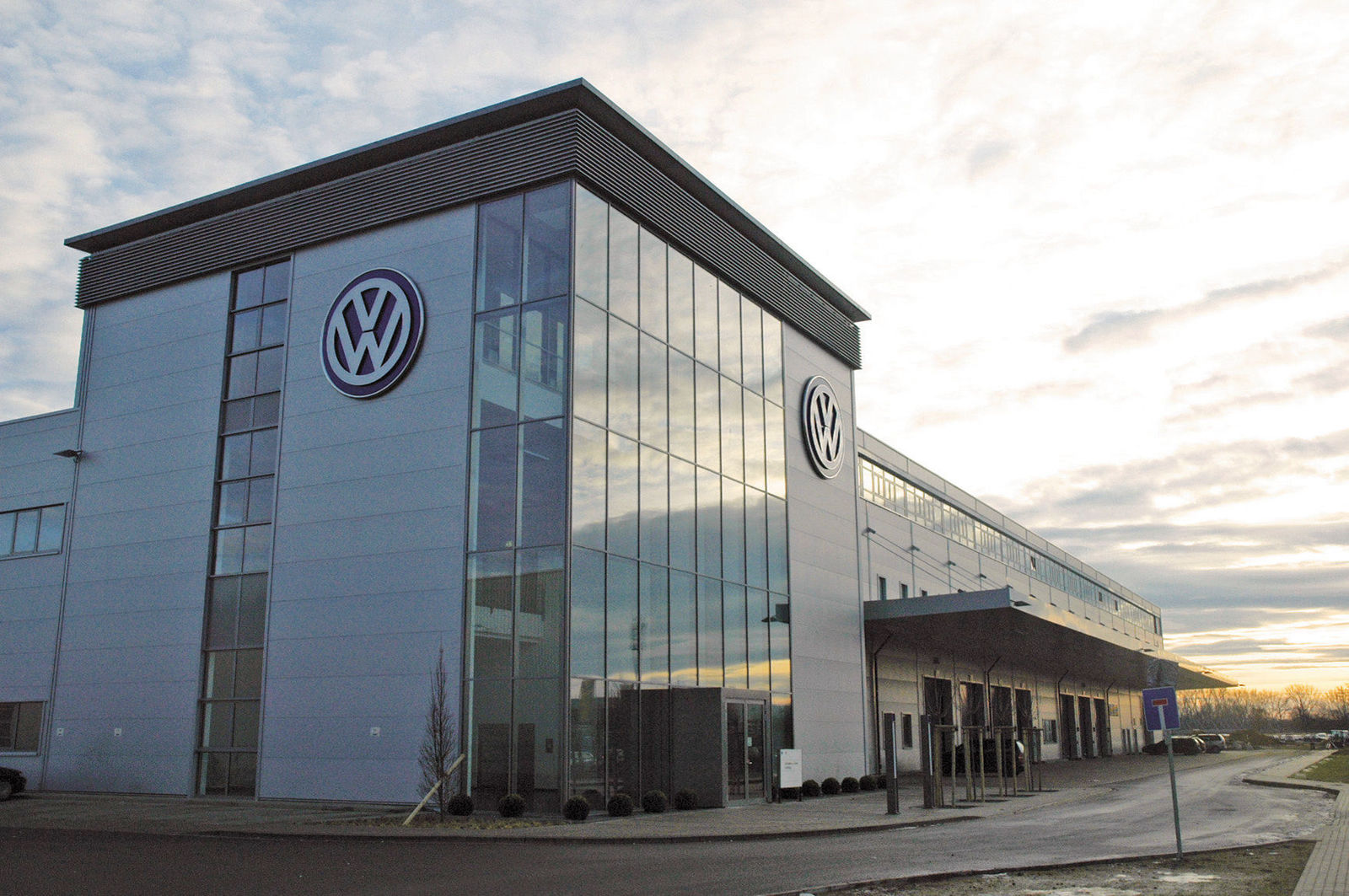 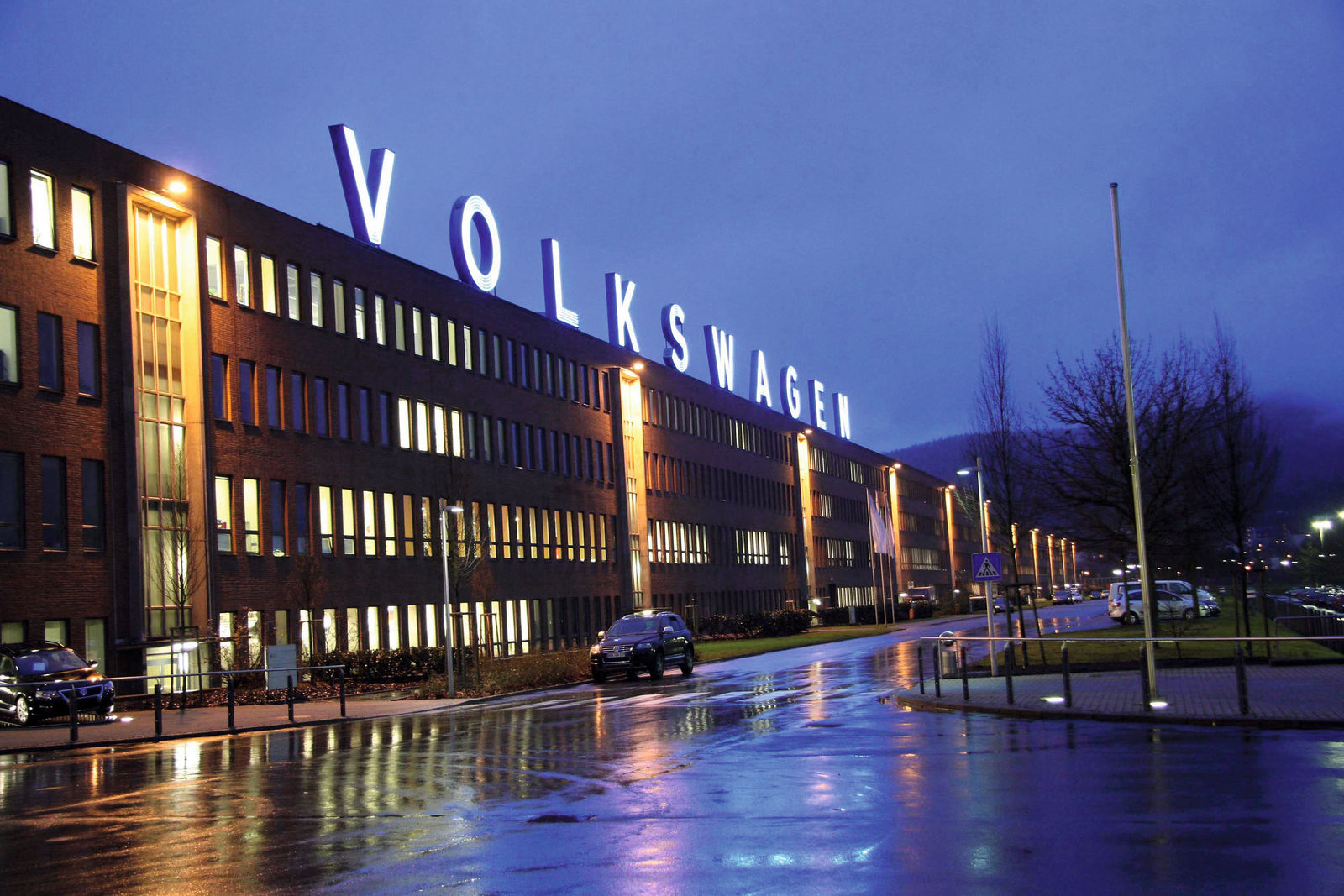 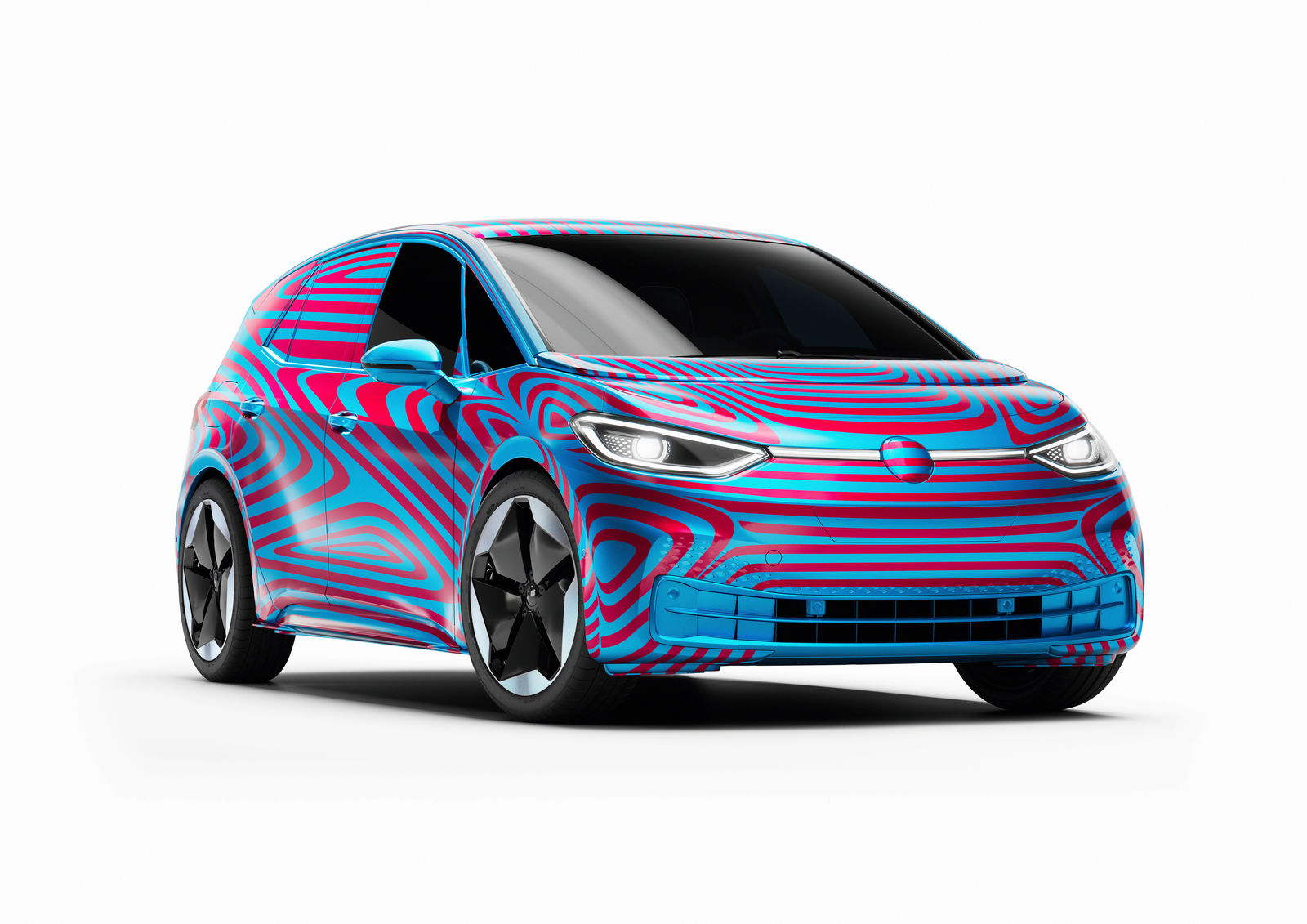