Alongside the Autostadt, the Transparent Factory in Dresden will become the second delivery location for Volkswagen brand e-cars. As demand continues to grow, new delivery professionals are required. A former assembly worker talks about his retraining. 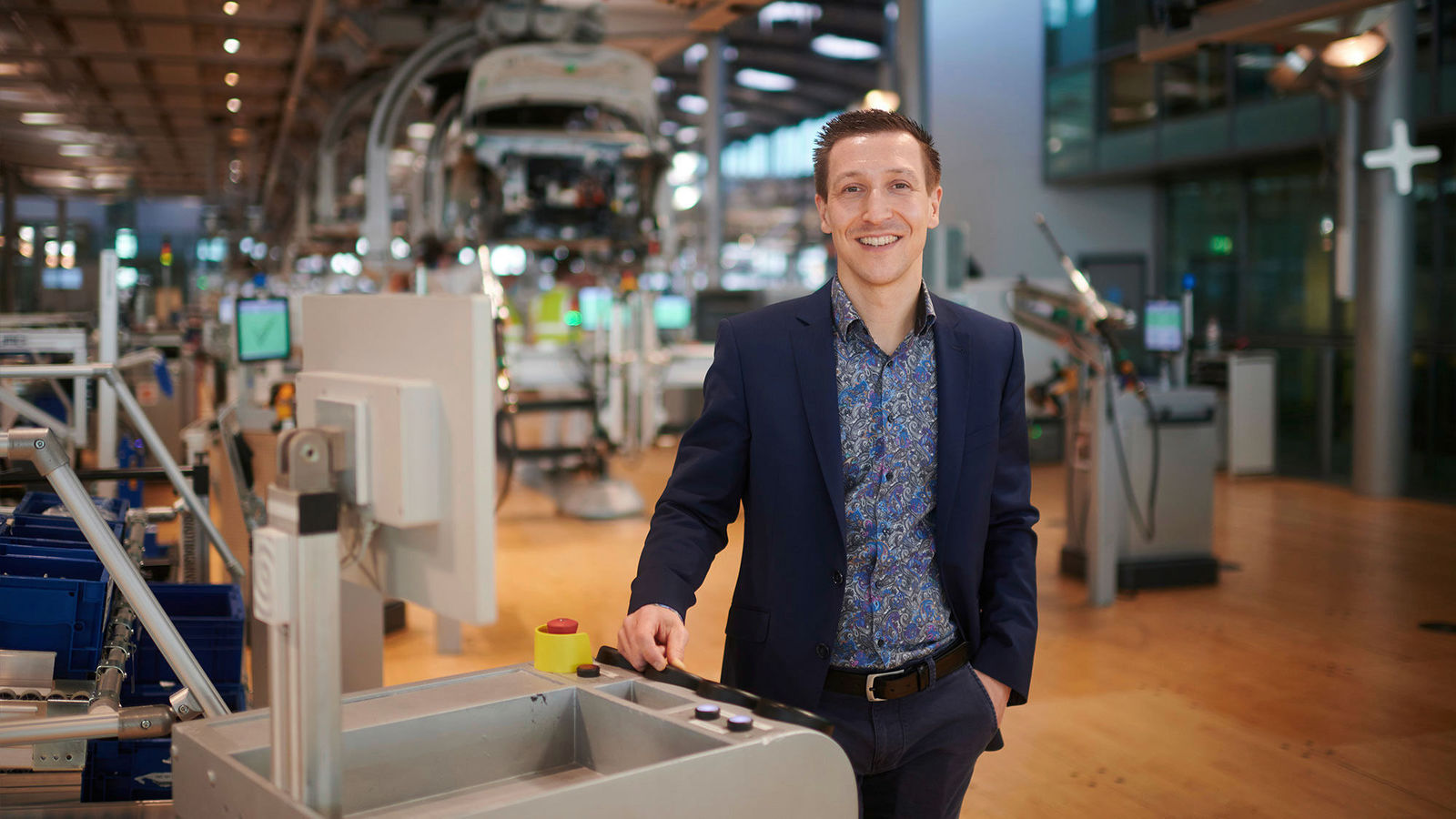 Old home, new look: Robert Pardavi in the hanger where he assembled the Phaeton and e-Golf for many years.

“I work at the most beautiful workplace in the world.” For Robert Pardavi, working at the Transparent Factory is a childhood dream come true. Pardavi has been working at Volkswagen since 2010. And after a career path with a few hurdles, he now gets to help bring the new “Home of the ID.” and thus the future of e-mobility to life.

Alongside the Autostadt in Wolfsburg, the Transparent Factory in downtown Dresden has become the second delivery site for e-cars. Soon, 35 ID.3s will roll off the production line here every day. And on March 26, 2021, the first ID.4 will also be handed over to a happy customer here. Robert Pardavi, like the entire company, is experiencing a lot of new things right now. Up until the end of 2020, he was employed in production at Volkswagen, and at the beginning of the year was retrained. Now he works in sales and is handing vehicles over to customers – sometimes it can happen that quickly. “Nobody offers what we offer here at the Transparent Factory. That’s unique in the world,” says Pardavi.

Production facility, visitor attraction, event location, test laboratory and delivery center – the Transparent Factory with its 380 employees is all of these in one. The e-Golf was produced here up until December 23, 2020, after which an approximately four-week conversion began to make everything fit for the production of the ID.3. Series production of the all-electric model began in the factory at the end of January 2021. Dresden is thus already the fourth location worldwide to produce Volkswagen models based on the modular e-drive system (MEB).

“Dresden has always been tech-savvy, and the location simply fits,” 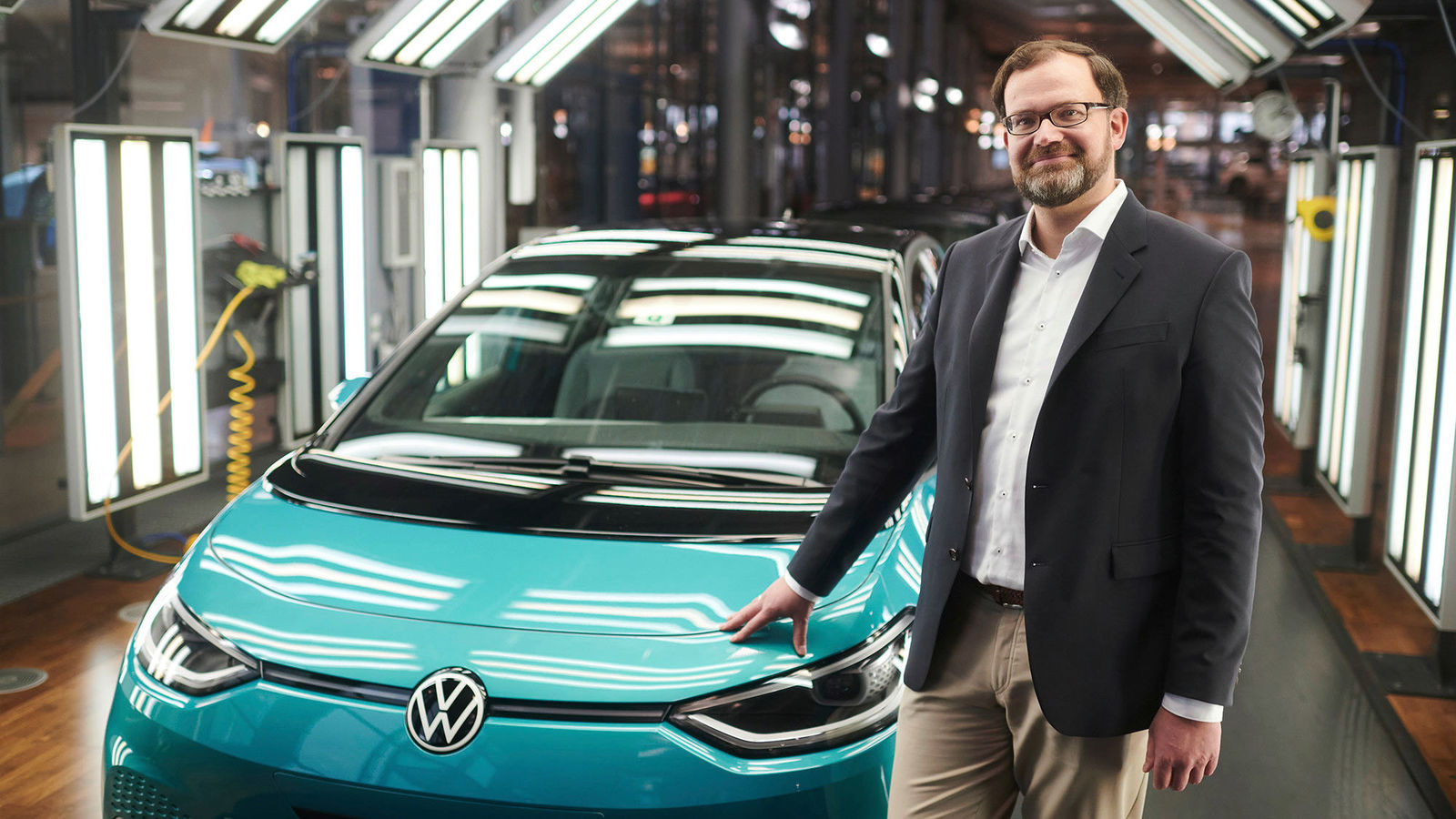 Sales manager Arnd Meyer-Clasen by the ID.3, manufactured in Dresden since January.

In Dresden, Volkswagen wants to offer customers and visitors a holistic experience of the ID. family – from advice and test drives to a tour of the production facility and helping to build the ID.3, right through to the handover of electric vehicles. The facility is a showcase for the current transformation process in the automotive industry and a flagship for technology from Saxony.Together with the electric production site in Zwickau, a small E-Valley is being created in the east – a bit of a San Francisco feeling in Saxony. “Dresden has always been tech-savvy, and the location simply fits,” says Arnd Meyer-Clasen, sales manager of the Transparent Factory. The entire company is undergoing a process of change, he adds. “And nowhere is the dynamic of this transformation more tangible than here.”

Robert Pardavi really wanted to be part of it. After years in production, he was retrained – from assembly worker to delivery professional, so to speak. It was a long road to get there: Pardavi, a trained automotive mechanic, started working in the production of the Phaeton at Volkswagen in 2010, where he worked in the suspension area. After further production stints in Chemnitz, Zwickau and Wolfsburg, the Dresden native returned to his hometown at the beginning of 2018. “I grew up with the Transparent Factory. It has always been a dream of mine to work here,” says the 36-year-old.

On January 1, 2021, he and six other new delivery staff started in their new roles, just in time for the production changeover from e-Golf to ID.3, which began at the end of January. In 2019, 1,301 vehicles were handed over to customers in the Transparent Factory, in 2020 it was 3,293, and by the end of 2022 it is expected to be 9,700 per year. Partly because of this boom in demand, Robert Pardavi is now in direct contact with customers on a daily basis after many years in manufacturing. “I’m a communicative guy and like to explain things to people,” he says. Customer satisfaction is always the most important thing, he says. 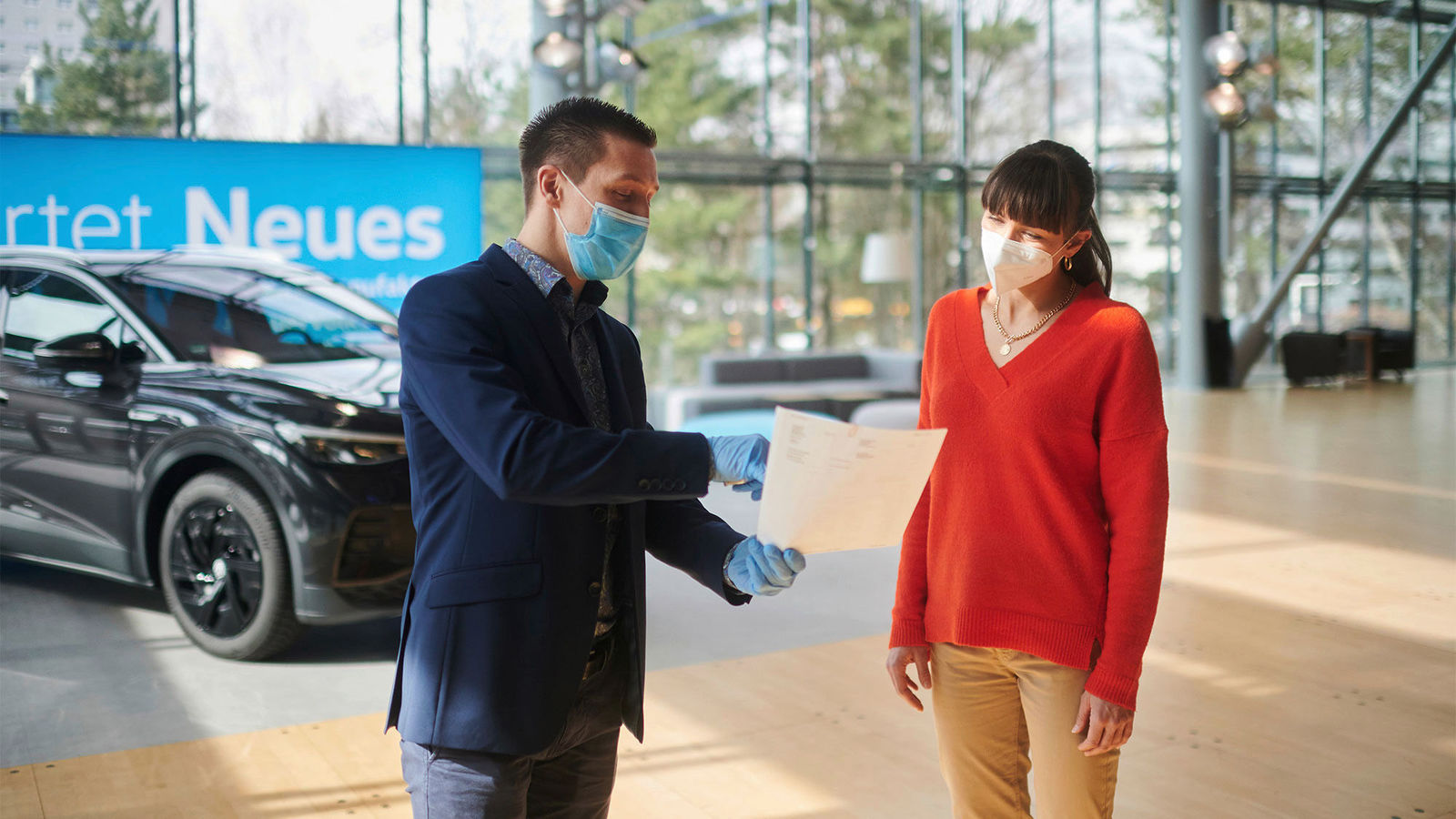 Only in Dresden: Due to the high order volume, vehicles are now additionally delivered next to the production line.

The Transparent Factory’s delivery service includes, among other things, a transfer at the train station by shuttle service, a welcome talk including a welcome drink, a film experience lasting several minutes about the ID.3, and an in-depth introduction to the vehicle. All features are explained in detail for up to an hour. In addition, there is the promise that the vehicle will be handed over in a climate-neutral manner, including a TÜV certificate. Afterwards, customers can enjoy a meal in the “e-Vitrum” restaurant or take a guided tour of the 83,000-square-meter production and experience world of the Transparent Factory.

“It is my drive to transport e-mobility to the population. A city without exhaust fumes is a great vision.” 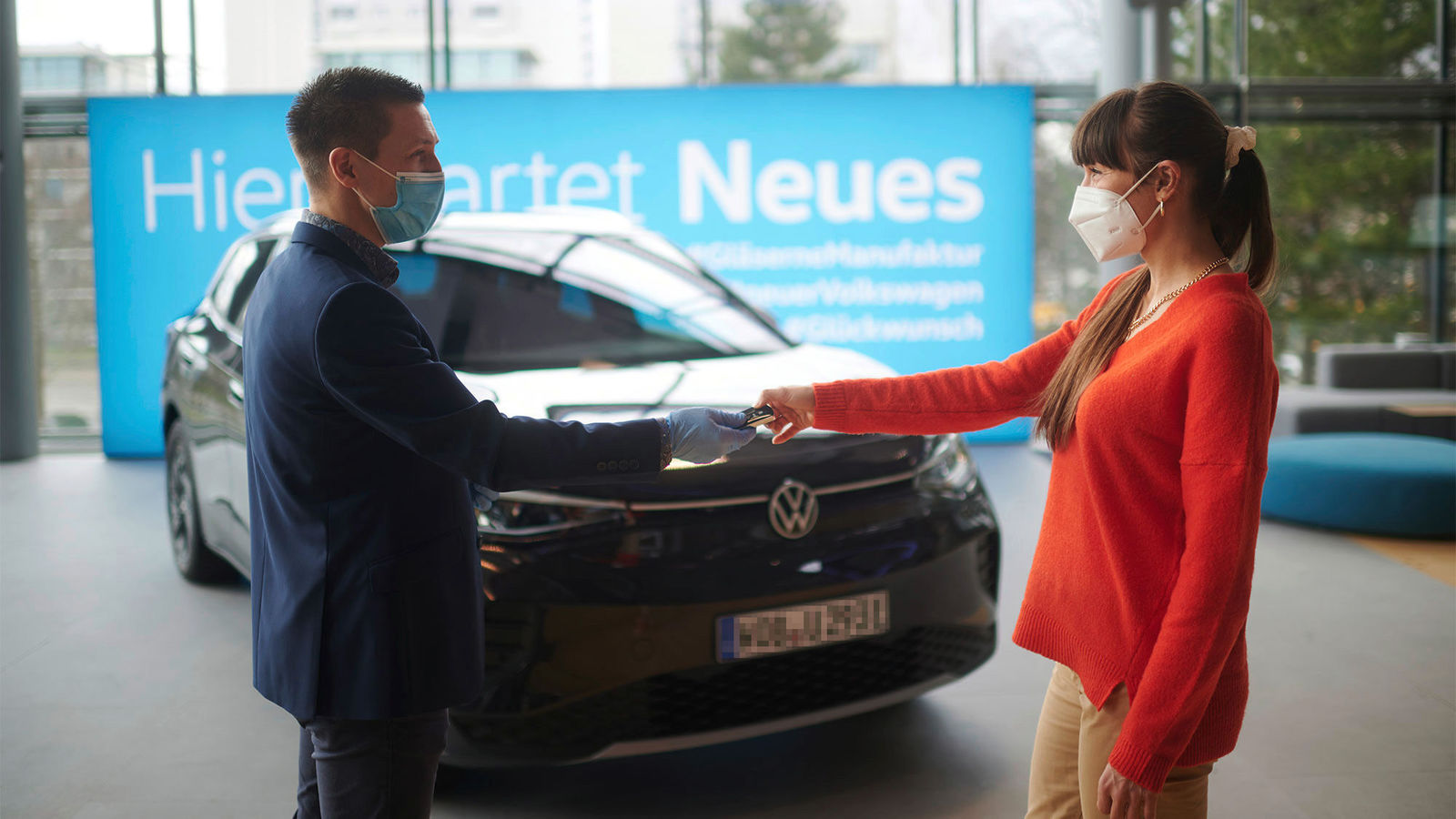 Robert Pardavi is still as enthusiastic about his workplace as he was on day one: “This isn’t classic automotive production here; the Transparent Factory has a very unique atmosphere.” His job is not just a job. The Dresden native notices how society is changing and how electric vehicles are entering the mainstream. He wants to play his part in this: “It is my drive to transport e-mobility to the population. A city without exhaust fumes is a great vision.” 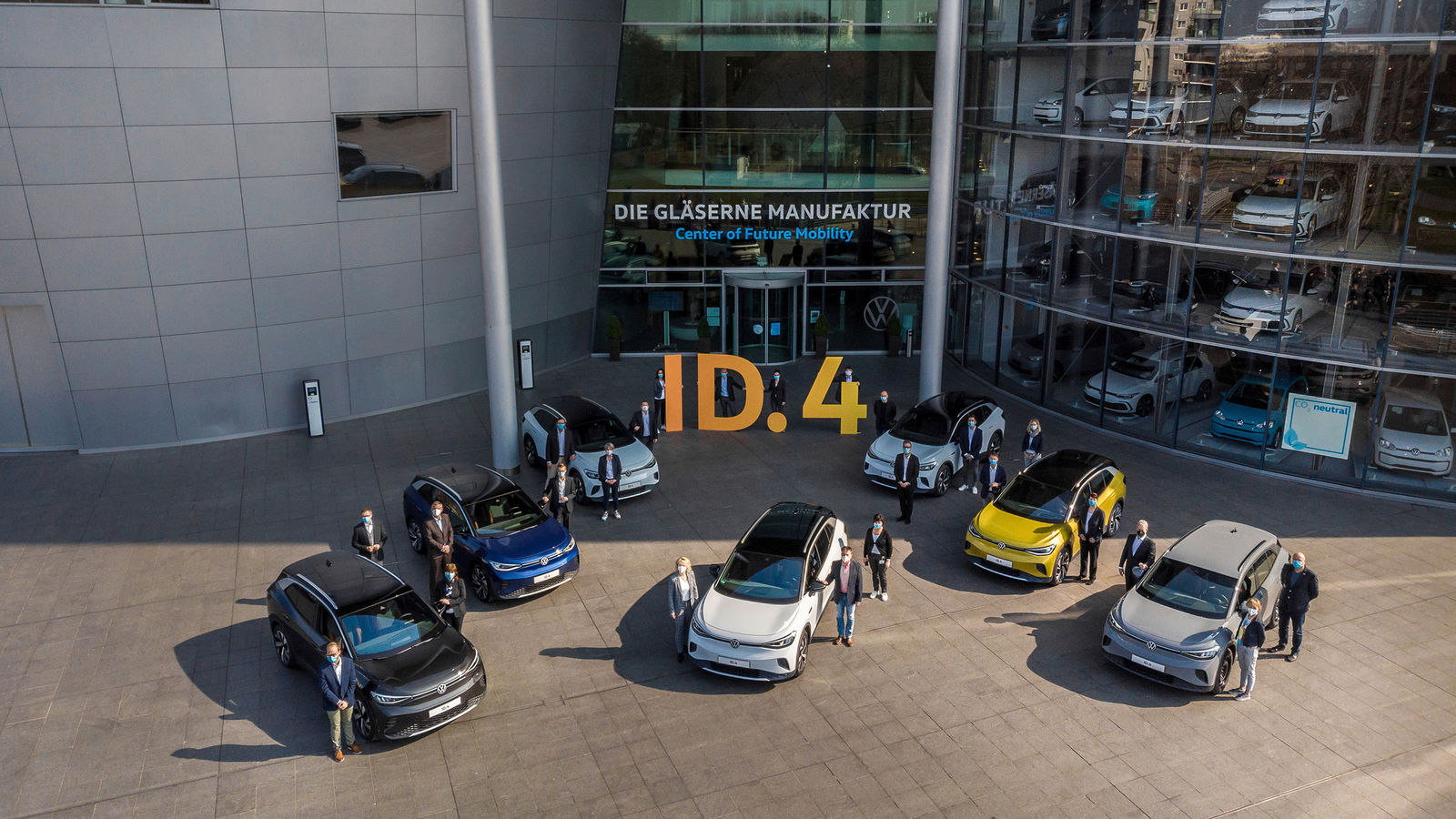