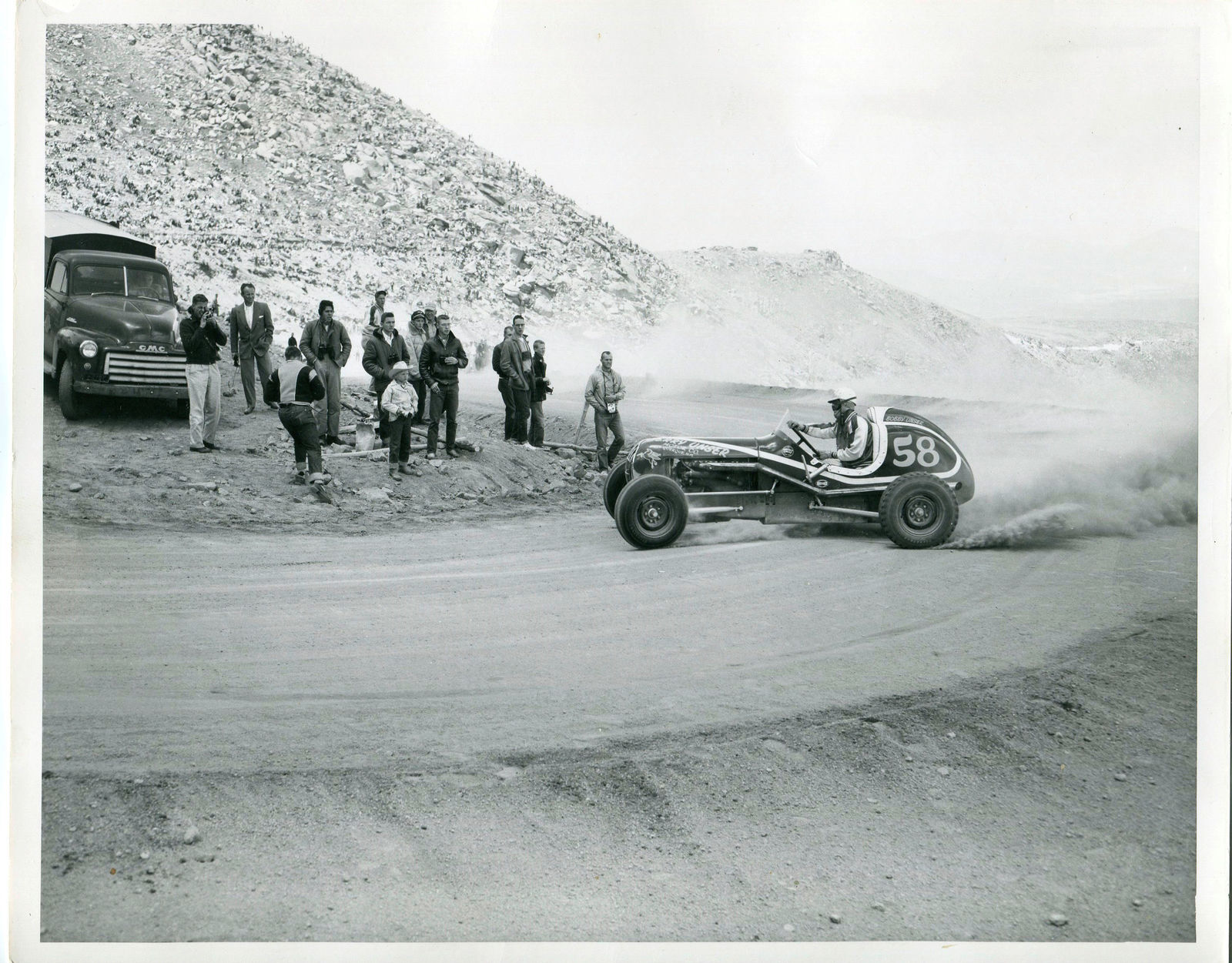 Archive
In 1956, Bobby Unser set a new record with a time of 14 minutes and 27.0 seconds. As in the year before that, his uncle Jerry had prepared the racing car.

From the history of Pikes Peak: individual families have celebrated whole series of successes.

The mountain race on Pikes Peak has been held 95 times since 1916 – and 26 of those times, the overall win went to someone with the Unser name. Originally from Switzerland, the family helped to shape the second oldest race in the US (after the Indianapolis 500) like no other. Also other families have left their marks with series of victories in the history of the famous “race to the clouds”.

We’ll start with the Unser-family: even before Spencer Penrose built his toll road on Pikes Peak, the three Unser brothers – Louis (called Louie), Joe and Jerome Henry (Jerry) – drove up the makeshift road to the 4,302-metre summit in view of their home town Colorado Springs – with a motorcycle and a motorcycle with sidecar. 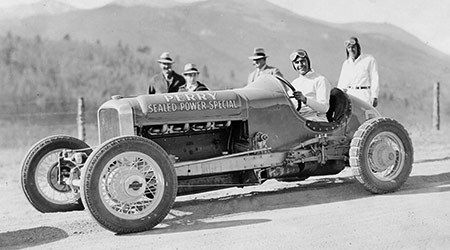 Archive
The premiere – with his win in 1934, Louis Unser, Senior., laid the foundation for his family’s unrivalled series of successes. 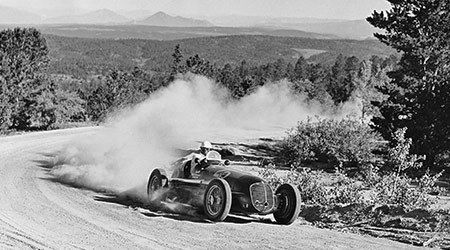 Archive
Rare image – in 1946, Louis Unser competed with a Maserati 8CTF rather than an American racing car. And he also won with the Italian vehicle.

Family of winners at Pikes Peak
When Jerry was later focusing on his skills as a car mechanic, Louie and Joe competed in the Pikes Peak Hill Climb for the first time. But Joe was involved in an accident during an Indy 500 test run in 1929. And so it was Louie who laid the foundation for the Unsers’ success story on ‘America’s Mountain’, as Pikes Peak is often referred to. In 1934, Louie Unser clinched the first of a total of nine overall wins, putting an end to Glen Shultz’s series of wins, for whom the racing event organiser had developed the catchy name ‘King of the Mountain’.

In the years before and after World War II, Louie Unser’s duels with Al Rogers (five wins) electrified the fans. Once the two drivers spun out in the last curve – reacting in a flash, Louie drove backwards over the finish line and won. He wanted to participate in the popular mountain race as a 71-year-old. ‘I’m the only one who’s ever paid the registration fee with a retirement check,’ he jokes. But the organiser didn’t grant Louis Unser, Sr., permission to compete. 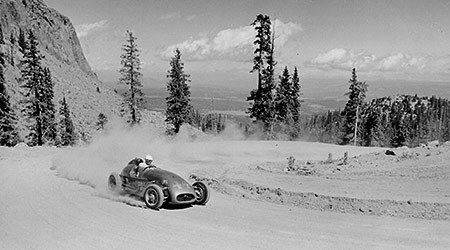 Archive
In 1951, Louis Unser only managed to take fourth place – here in the George’s Corner stretch. 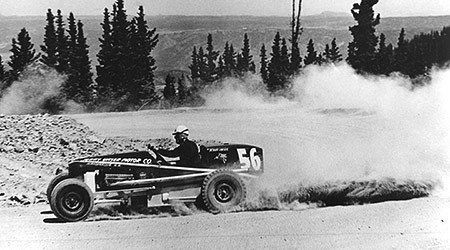 Archive
The next generation – Bobby, son of Jerry Unser, Sr., competed for the first time in Pikes Peak in 1955.

Motorsport in the DNA
At that point in time, the baton had already been passed on to the next generation of Unsers. Jerry Unser, Sr., and his wife Mary had four sons – all of them racing drivers. Two of them – Louis, Junior., and Jerry, Junior. – are twins and both celebrated class wins on Pikes Peak in the ‘Stock Cars’ category (modified production vehicles). Jerry, Jr., was involved in an accident during the Indianapolis 500 and died. Louis, Junior., suffered from multiple sclerosis and had to hang his helmet for good early on. But the ingenious mechanic became one of the best team leaders of his time.

Robert William (called Bobby) and Alfred (Al, Sr.) even managed to exceed the successes of ‘Uncle Louie’. The two of them not only won on Pikes Peak, but also the legendary Indianapolis 500. ‘Without our successes on Pikes Peak, we probably wouldn’t have had the opportunity to race in Indianapolis,’ says Bobby. Al, Senior., (two Pikes Peak wins, four-time Indy 500 winner) recalls: ‘Regardless of where I raced, Bobby was usually my fiercest competitor.’

Bobby Unser is convinced: ‘The good Lord put me on earth to win this race.’ Pikes Peak competitors see it this way: ‘An Unser always wins.’ 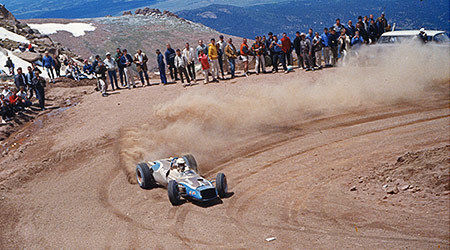 Archive
Al Unser not only won the mountain race on Pikes Peak – here his second win in 1965 – but also the Indianapolis 500. 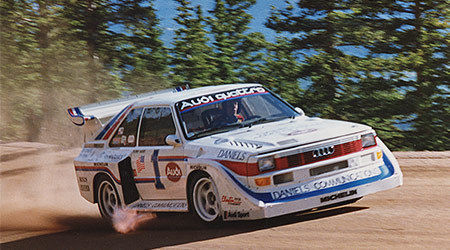 Archive
Comeback at the age of 52 – Bobby Unser competed again in 1986, winning once more in the Audi quattro and taking back the track record.

Tyres, retirement and records
But the Unser brothers are more than just experienced drivers. They also have revolutionary ideas about technology. ‘We didn’t have any money for new tyres at the beginning,’ says Bobby. ‘Once when we were repairing used tyres, a few nut shells found their way into the tread.’ As they were training, they realised that the tyres had better traction, sort of like studded tyres on ice. It only makes sense that the name Unser was high up on the results list that year.

Bobby Unser (three wins in the Indy 500) ultimately set a record with ten overall wins on Pikes Peak, which he still holds to this day. He had actually given it all up in the 1970s. But in 1985, when French Michèle Mouton was not only the first woman to win, but also achieved a new best time in the Audi quattro, Bobby Unser could no longer remain in retirement. ‘A girl holds the record? I couldn’t just let it go.’ In 1986, he returned to Pikes Peak at the age of 52. He clinched the overall win and the track record in the Audi quattro – and for him the world was back to the way it was supposed to be. 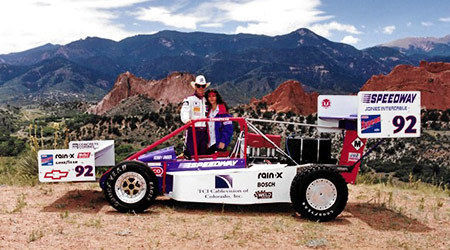 Archive
Next, please – Bobby Unser’s son Robby continued the family tradition, winning in 1992 but losing to Paul Dallenbach in 1993 (photo). 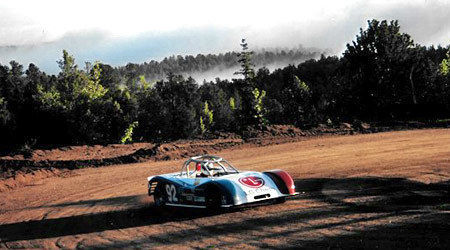 Archive
Jeri Unser was the first female family member to compete in Pikes Peak. In 2003, she set a record in the still somewhat new class of electric vehicles.

Racing driver dynasty in its third generation
By this time, the third generation of the racing driver dynasty had already made a name for itself on ‘America’s Mountain’. Bobby’s son Robby added another four ‘King of the Mountain’ titles to the family’s statistics. Daughter Jeri was the first female Unser to compete in the Race to the Clouds in 1998, demonstrating that she was just as good as the male family members – in 2003, she set a record in the electric vehicle class.

Alfred, Jr., (called Little Al) was one of the stars of the IndyCar Series, winning the Indy 500 twice. He only won Pikes Peak once, in 1983, which was also due to the fact that motorsport had become much more professional and didn’t leave drivers much to time to finance events outside of their actual line of work.

The name of future Formula 1 World Champion Mario Andretti only appeared in the list of winners because the Pikes Peak Hill Climb was included in the official championship of the United States Auto Club (USAC) in 1969. 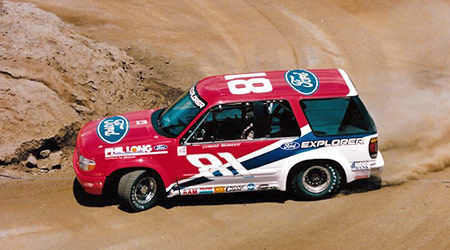 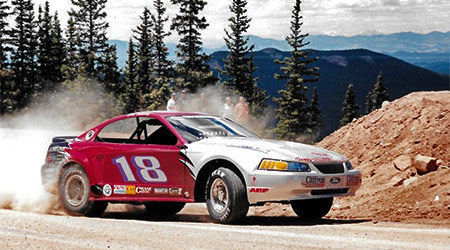 Archive
Leonard Vahsholtz’s son Clint competed on a motorcycle and in a car (1999 in the photo). Together, he and his father clinched 32 class wins – more than the Unsers.

Racing fanatic families and a monster on Pikes Peak
The Unsers aren’t the only family who have written history on Pikes Peak. The name Vahsholtz is a legend in the smaller classes. Leonard Vahsholtz perfected the art of winning the two categories ‘Sprint Cars’ and ‘Super Trucks’ in 1993. Between the two races, he flew from the summit to the starting line in a helicopter. ‘That was banned afterwards, so I’ll hold my record for eternity,’ says Vahsholtz amused. His son Clint won the motorcycle class in the same year. Together, the Vahsholtz father and son duo have collected 32 class wins. Leonard’s grandson Codie is now one of the best motorcyclists.

The father and son team Rod and Rhys Millen experienced a similar level of success as the Vahsholtz family. Rod secured his first of five overall wins in 1994 with the fastest time that had ever been achieved on the fully unpaved route. Rhys Millen (two overall wins) currently holds the track record for electric vehicles, which Volkswagen will be trying to beat with the I.D. R Pikes Peak in 2018. 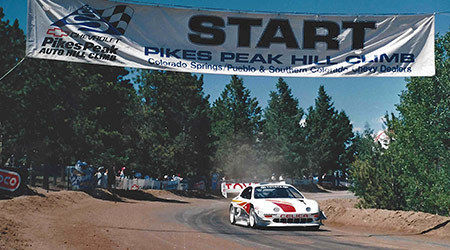 Archive
Toyota driver Rod Millen set a new time record on the fully unpaved route in 1994, which was only beaten once the route had been partially tarmacked. 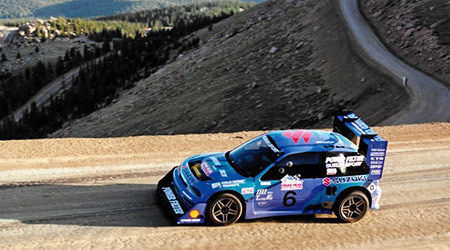 Archive
Nobuhiro Tajima of Japan also competed in a two-engine vehicle, falling short of a victory in the Suzuki in 1993.

With ten overall wins, Bobby Unser is number 1 in the statistics, whilst his uncle Louie holds second place with nine titles. The third best, with eight overall wins, is Nobuhiro Tajima of Japan, whom fans and competitors respectfully call ‘Monster’ due to his aggressive driving style and physical presence.

Coyotes for ‘America’s Mountain’
You won’t find a man in these statistics whose cars revolutionised the world’s most famous mountain race in the late 1970s: John Wells. Under the name Coyote, Wells adapted tried-and-tested dragster technology for use on Pikes Peak’s gravel road. Powerful V8 engines above the powered rear axle delivered superior traction. Wells’ customers achieved four overall wins, though he himself as a driver never excelled beyond a class win. Still, 21 class wins for his Coyote is a Pikes Peak record for an individual vehicle model. But there won’t be any more, as 2018 will be the first year that the Coyotes are no longer permitted in the Pikes Peak International Hill Climb. 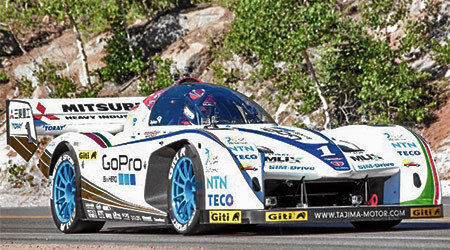 Archive
Tajima the ‘Monster’ was very fast again in his own electrically powered construction in 2013. But he lost to World Rally Champion Sébastien Loeb, who set the current track record. 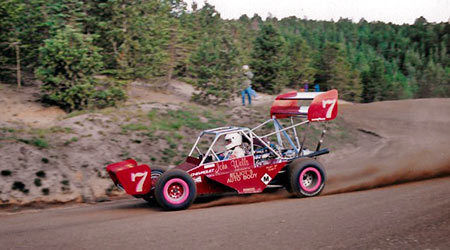 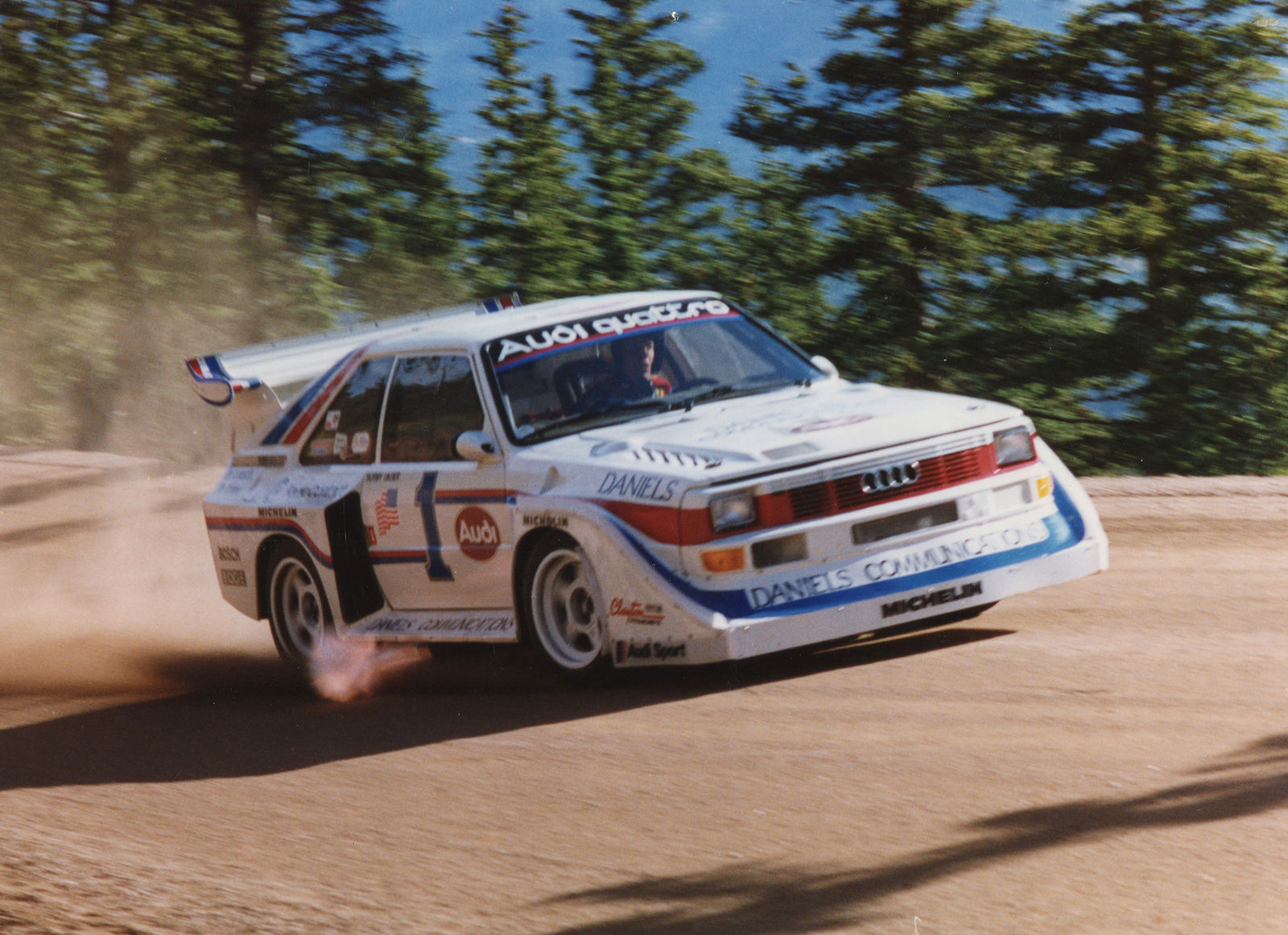 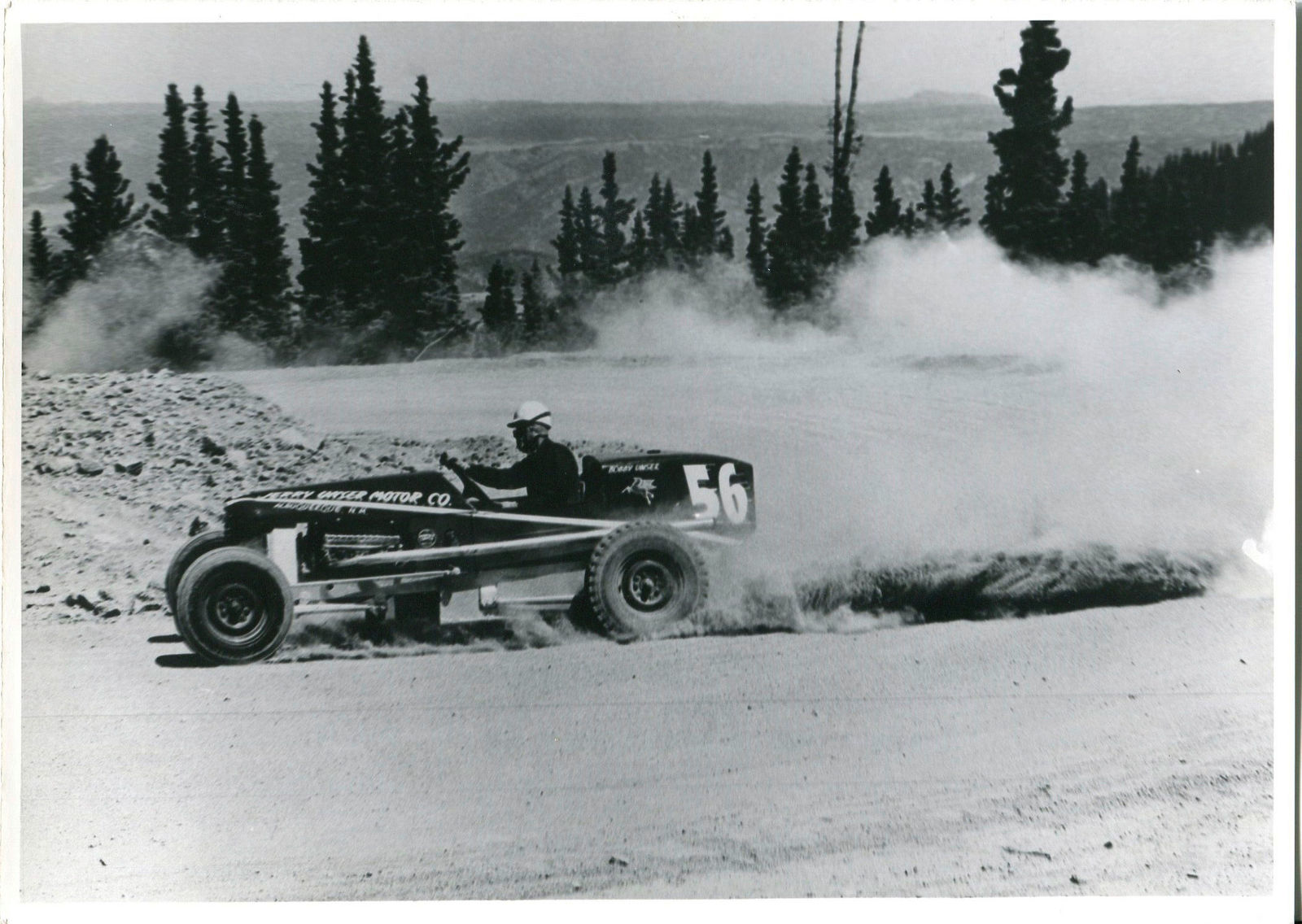 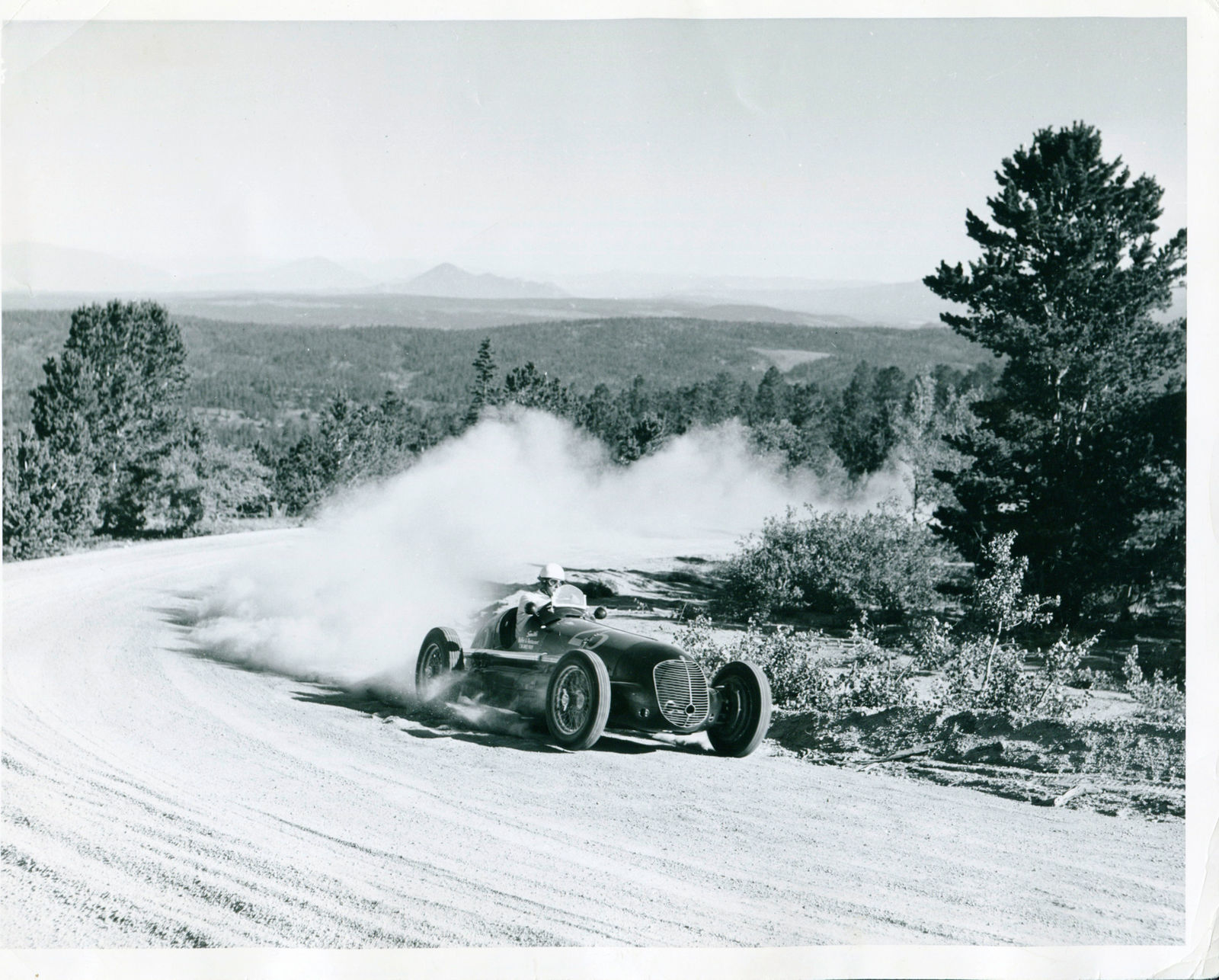 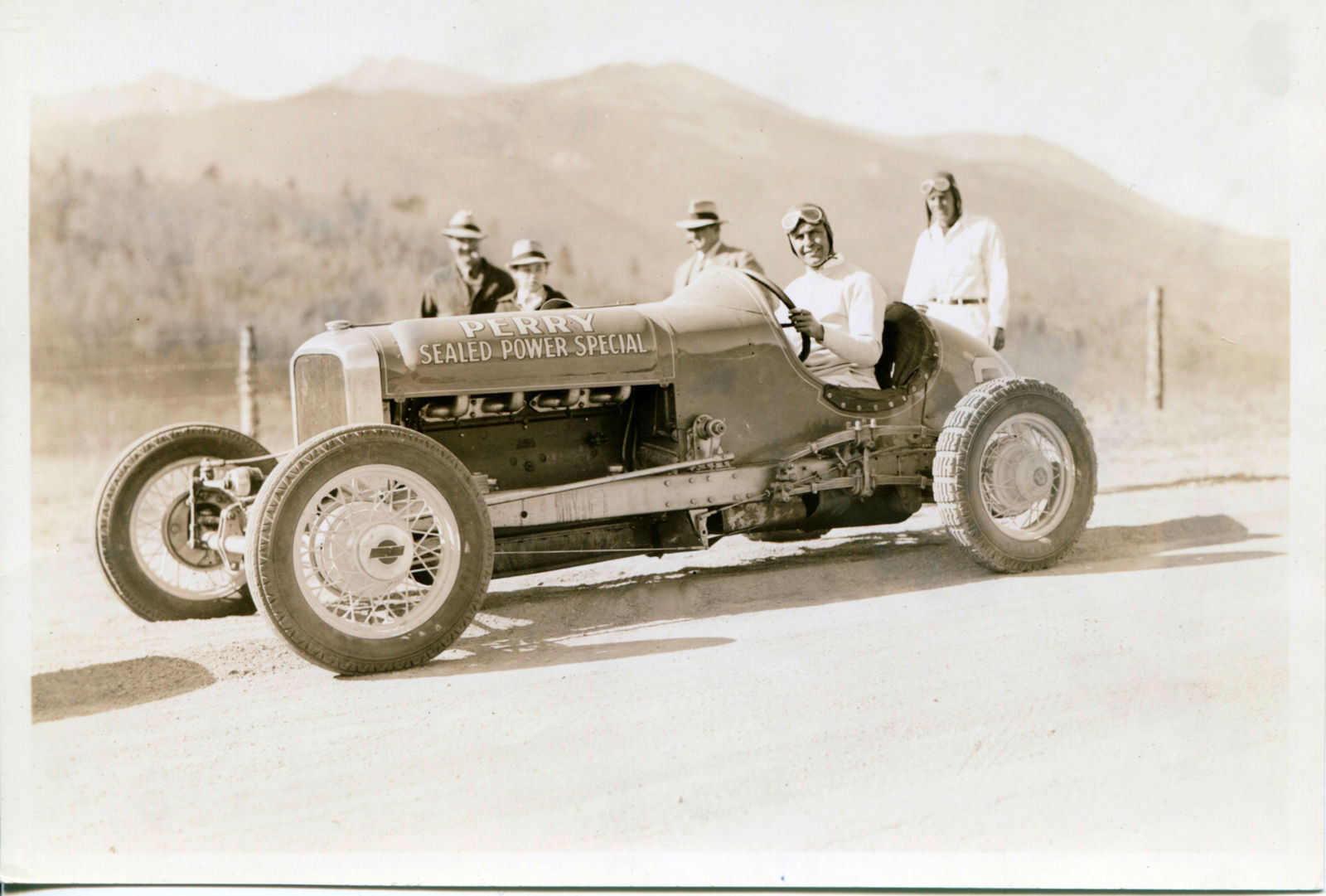 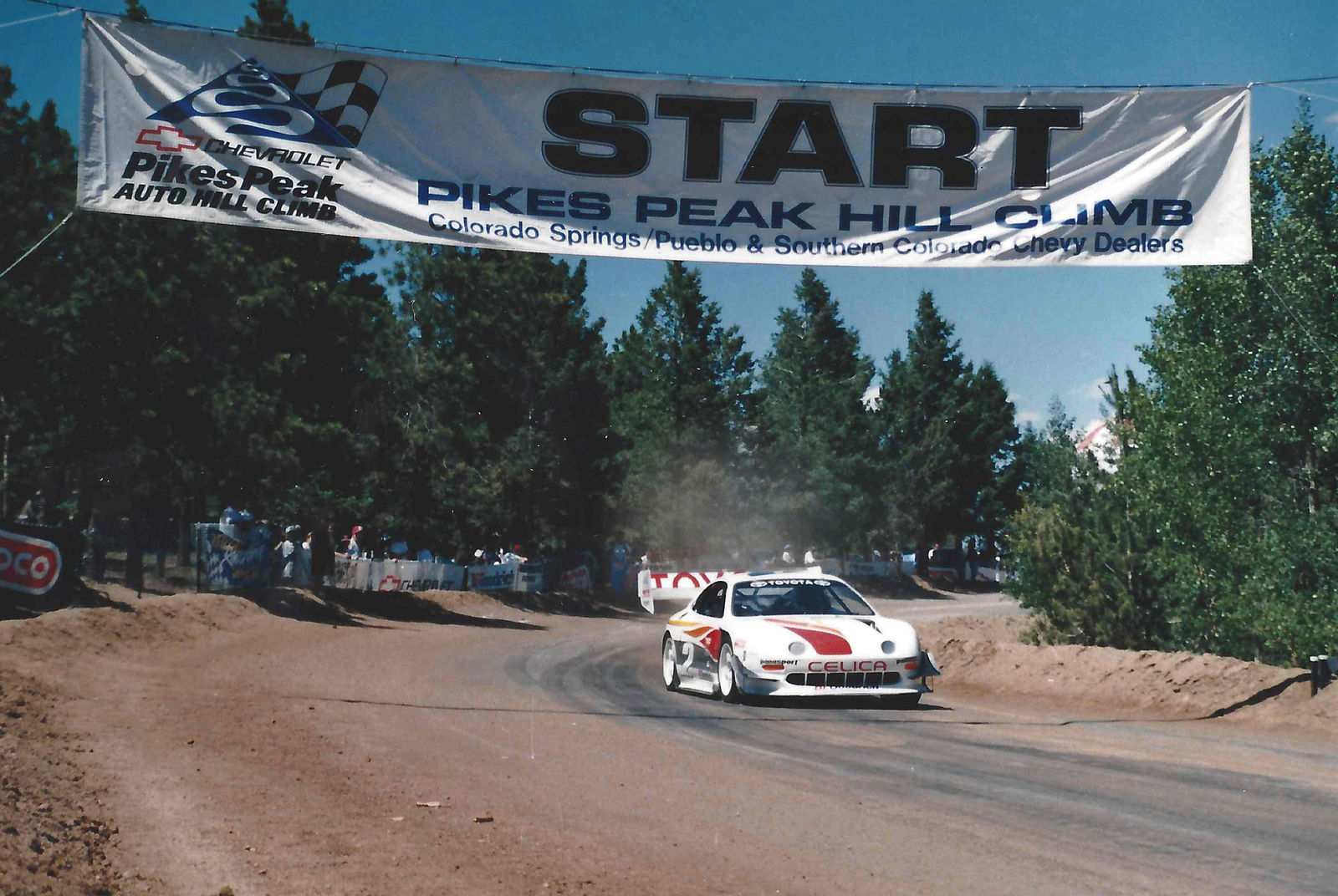 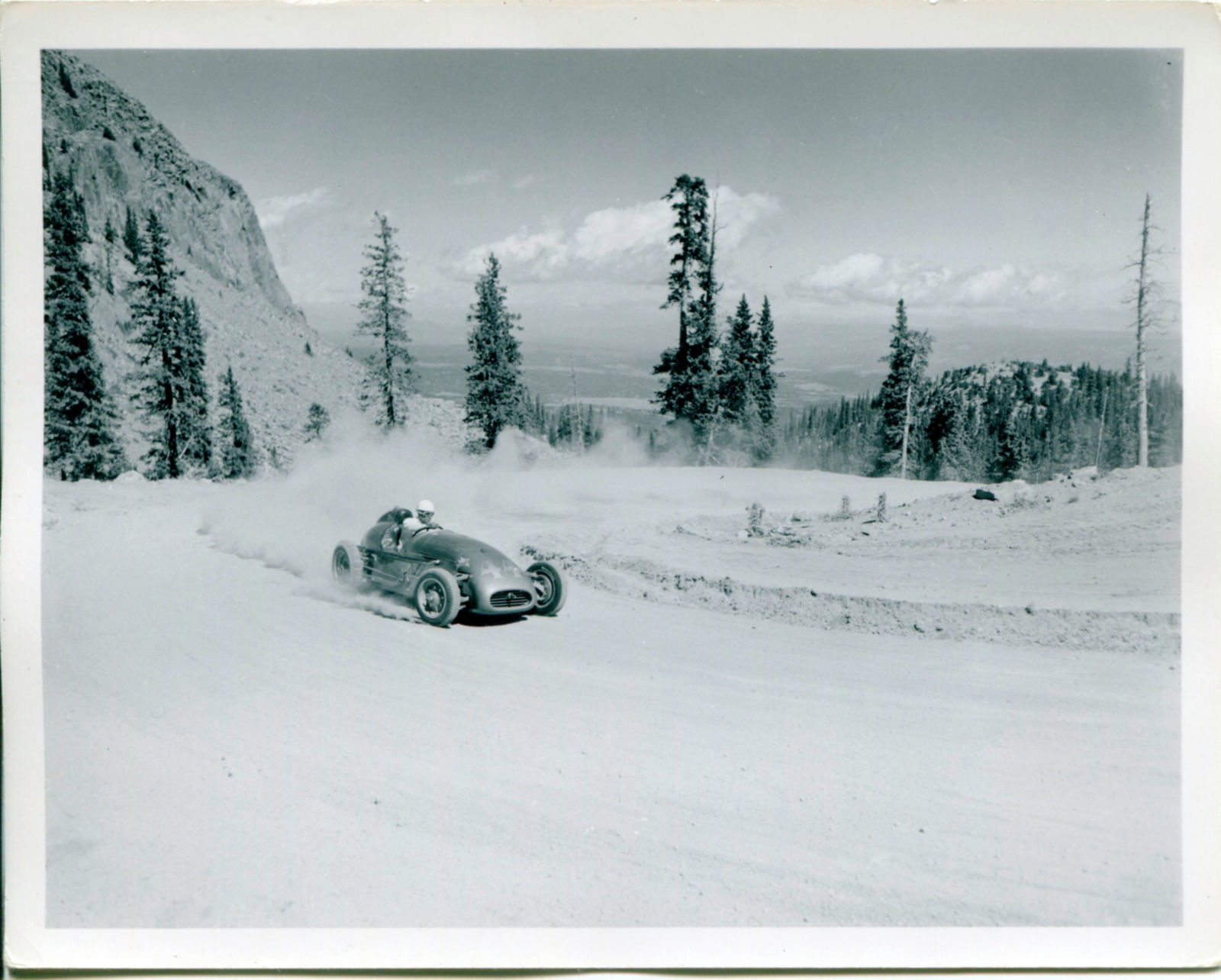 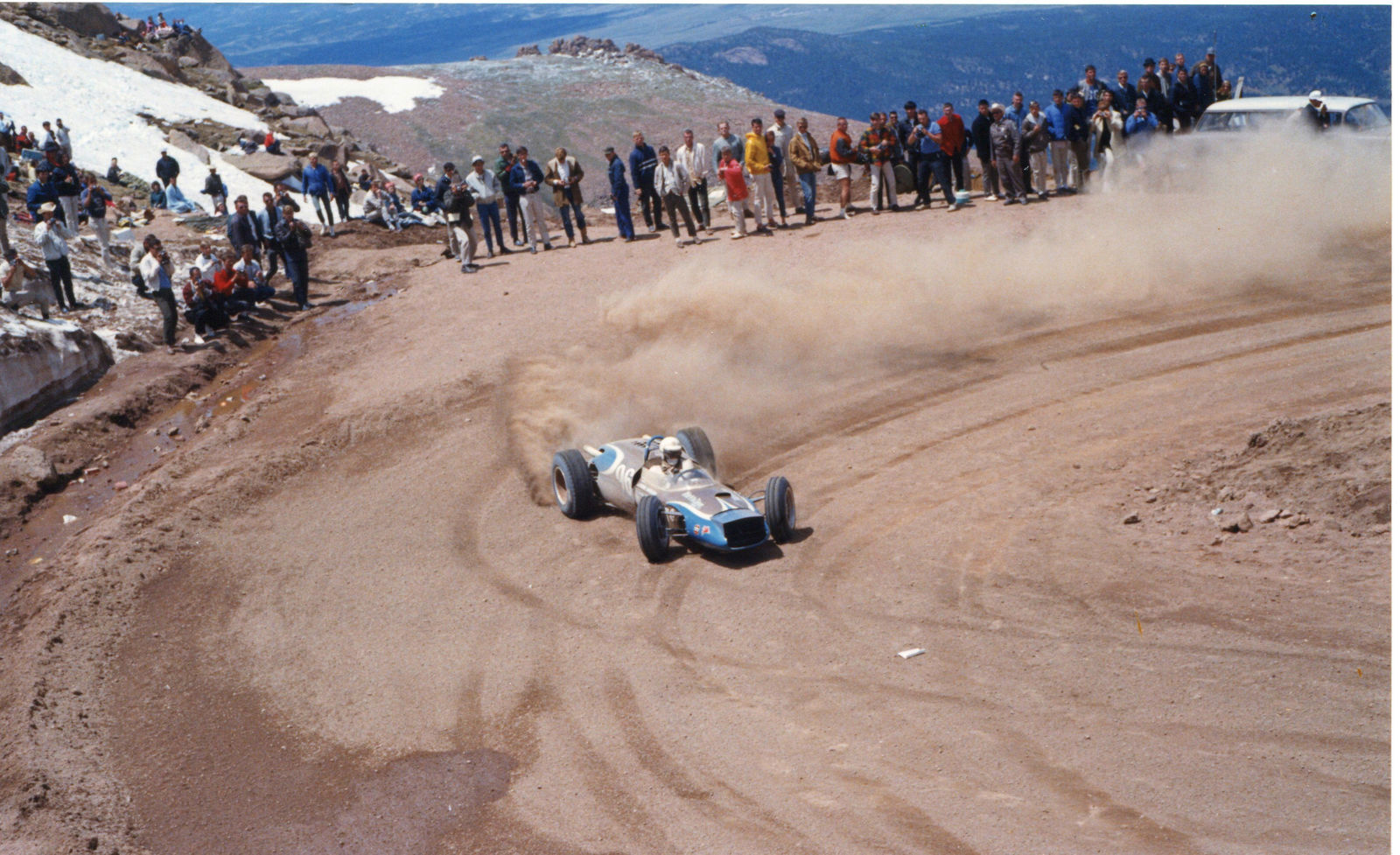