A brief look at the open fun-cars with Volkswagen technology. 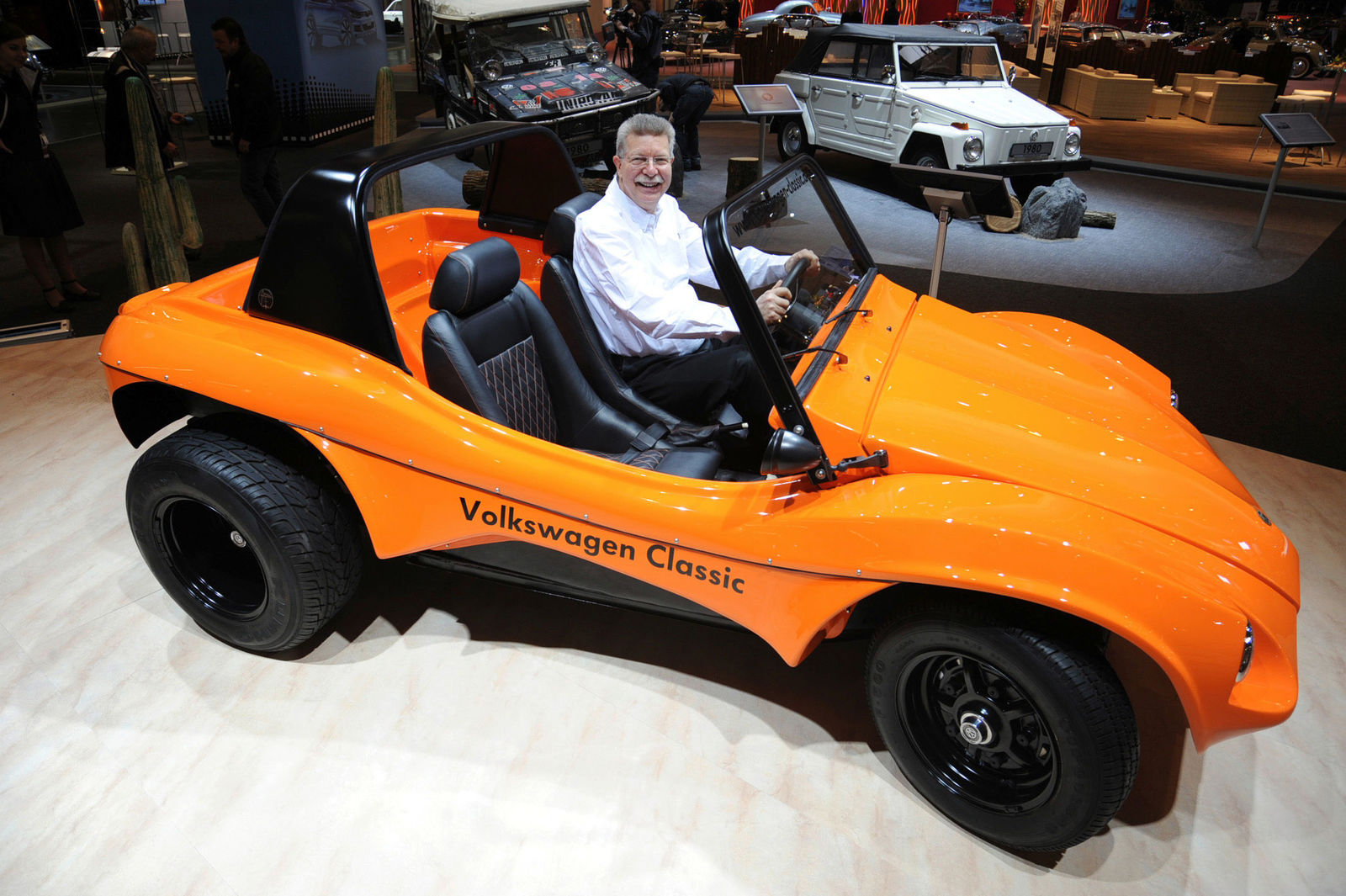 Volkswagen stands for quality, reason, and more: It has also been bringing fun cars to the roads for seven decades. They prove how well engineers and technicians can handle visions and emotions. Eberhard Kittler, head of the Volkswagen AutoMuseum in Wolfsburg, has written down the story for us:

"Stretchmobile with teak floor, twelve-cylinder in the compact class, beachmobile in jolly look – all this and much more has been preserved in the archives in Wolfsburg and Osnabrück. If engineers were allowed to do as they pleased, there would be such amazement. Many ideas, many drafts, and many one-off showcars. But none of them for sale. A volume manufacturer like Volkswagen is dependent on the consistently high demand of its models. And yet, the members of the board did not turn out to be spoilsports, as they often gave the go-ahead for emotionally charged unreasonableness on wheels – preferably in an open-top design.

It all began with the Beetle convertible, which was developed by Karmann in Osnabrück and then built on a Volkswagen contract: from 1949 to 1980, in more than 330,000 units. Sadly, it has been all but forgotten that, in addition to this, a roadster version of the open-top Beetle was launched. 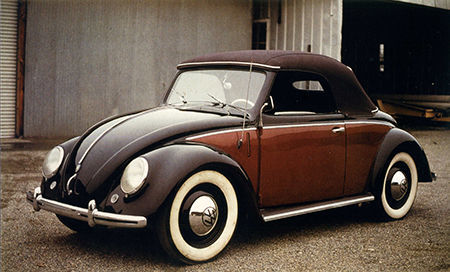 The "VW Beetle Hebmüller convertible" had a shorter roof than the regular convertible and less space in the rear-seat. But: chic! 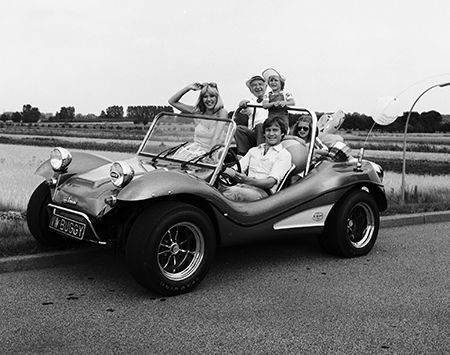 Six-digit prices for the beauty from Wuelfrath / Germany

Hebmüller, however, built only a few of their stylish Schoenlinge with two spare seats in the rear (exactly: 696 units) – not because the clientele did not want more, but because the factory in Wülfrath near Wuppertal unfortunately burned down in 1953. Six-figure amounts are currently requested and paid for these rare but much sought-after vehicles.

Today's designers – who have to face the challenge of self-supporting bodies – would have every reason to envy their former colleagues. After all, they had much more creative freedom thanks to the stable Beetle platform frame. As a result, dozens of very small series and unique models were produced around world well into the 1980s.

The uncompromising open-top Dune buggies and, due to the shortened rear, the martial Baja bug were confined to the annals of history, both – of course – originally coming from California. While only a few models of the Baja racers, which would have driven every TÜV official mad, ventured on to local streets, the buggy also advanced in Europe to become a coveted eye-catcher with evergreen potential.

From the mid-60s, at least two dozen European body manufacturers were an open fountain of youth. Among them was Karmann in Osnabrück, where the idea of a readers' competition in the automobile magazine "Gute Fahrt" was implemented in the form of a stylish leisure mobile. 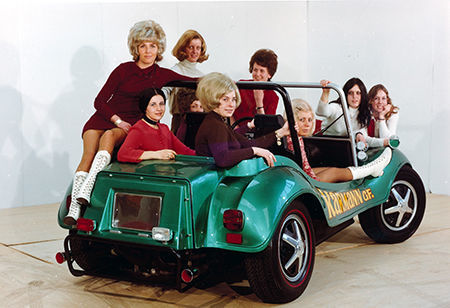 Although the number of dunes in Germany is limited, Dune buggies were highly sought after here in Germany. 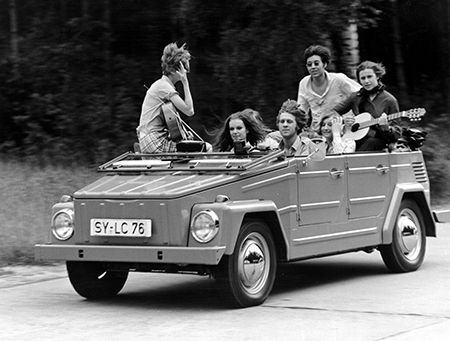 Only a small number of courier cars went to the military. The rest saw a lot of civilian and sometimes lifestyle use.

The first „cross-over"-model by Volkswagen

Volkswagen itself secured a slice of the pie with the "Type 181 courier car" offered from 1969 onwards. Unfortunately, it was not possible to come up with a more snappy name for the model ... this Beetle lookalike – with rear engine and rear-wheel drive – was probably the first crossover model in Volkswagen history. Numbers made up with the Bundeswehr, forestry and communal service versions, but its image was made by the five-seater with the fold-down windscreen, for example, in the USA, where it was referred to as "The Thing". Together with the campervan, it perfectly illustrated the hippie era.

And in Bali, where the Type 181 was assembled for a while, it is still in use today as a brightly coloured tourist mobile. Around 140,000 courier cars were built in total.

The polecat (type 183) really got down to business, which was available from 1979 in civilian version.

The permanently four-wheel drive, open-top vehicle was based on a military vehicle from Ingolstadt, but had been converted to a snappy adventure mobile. The magnificent multiple victory of four of these polecats at the Paris-Dakar Rally in 1980 was what paved the way for this. If you ordered this model with a short wheelbase and minimal overhangs, you could safely venture into extreme terrain: 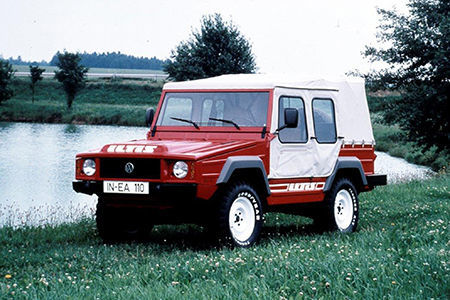 The polecat in the rare civilian version. 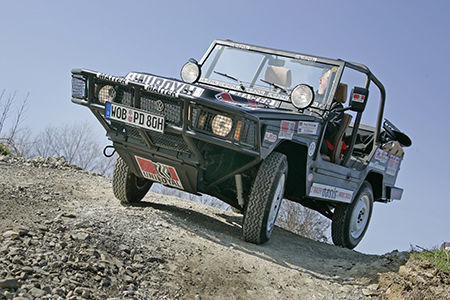 With the winning look of 1980: a replica of the Paris Dakar Rally vehicle.

With differential locks, a climbing ability of 75 degrees and a fording depth of 600 mm, the polecat could do much more than expected – preferably well beyond the proverbial beaten path. More than 10,000 vehicles were delivered.

About a German-Italian cross-breed

But Volkswagen also offered driving pleasure at home in the popular compact segment: the 1979-built Golf convertible has become something of a legend – but there was also an open-top version of the Golf, Passo, which remains largely unknown today.

It was created in cooperation with the company ACM / Biagini near Pescara on the Adriatic coast. From 1990 to 1993, around 300 four-wheel-drive Golf Country models were converted into convertibles with a wide range of foreign parts. As many as five people could be seated under the huge soft top.

No other vehicle offered such raised seating. At least 50 of these moving sun worshippers came to Germany, but fell mostly victim to rust, being so far away from the mild weather conditions of Italy.

The topic of "open off-road driving" was far from over, quite the opposite in fact. In 2016, Volkswagen caused a stir with the special model Beetle Dune convertible, beguiling the senses from every perspective. 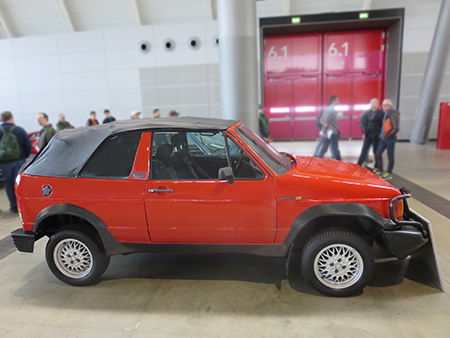 The Biagini Passo. A mixture between Golf Cabrio MK 1 and Golf Country. 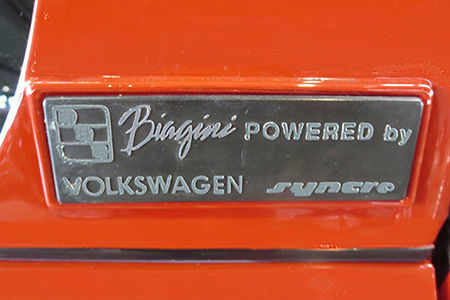 "Biagini powered by Volkswagen syncro" stands on a poster on the nose of the barely known Italo Teutons.

This crossover is a classic from the factory – raised suspension thanks to the so-called "heavy-duty running gear", on 18-inch wheels, with chic attachments, in bright colours (including the specially created "Sandstorm Yellow Metallic"), complete with attractive features. Thus, the idea of the former Baja bug finally arrived in Central Europe.

The visionaries really whet people's appetite for the unusual in March 2016 in Geneva. The T-Cross Breeze concept car incorporated all the ideas and experiences of all the unconventional cars mentioned here.

A large soft top covers the 4.13 m short compact SUV, which allows the blue sky to engulf vehicle when needed. A trend-setting, good-mood mobile for the odd adventure now and then, with a futuristic interior design that is the dream of more than just the fully fledged hipster. The T-Cross Breeze was met with undivided enthusiasm at its numerous trade fair appearances. That gives hope for more." 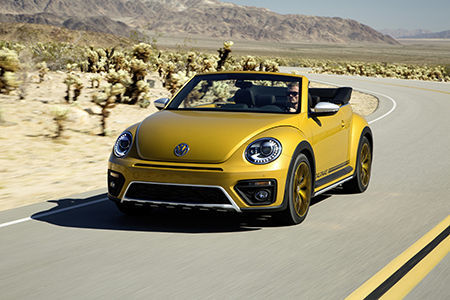 With the Beetle Dune, Volkswagen created a link to the former Baja Bug, which had its home in Southern California and Mexico. 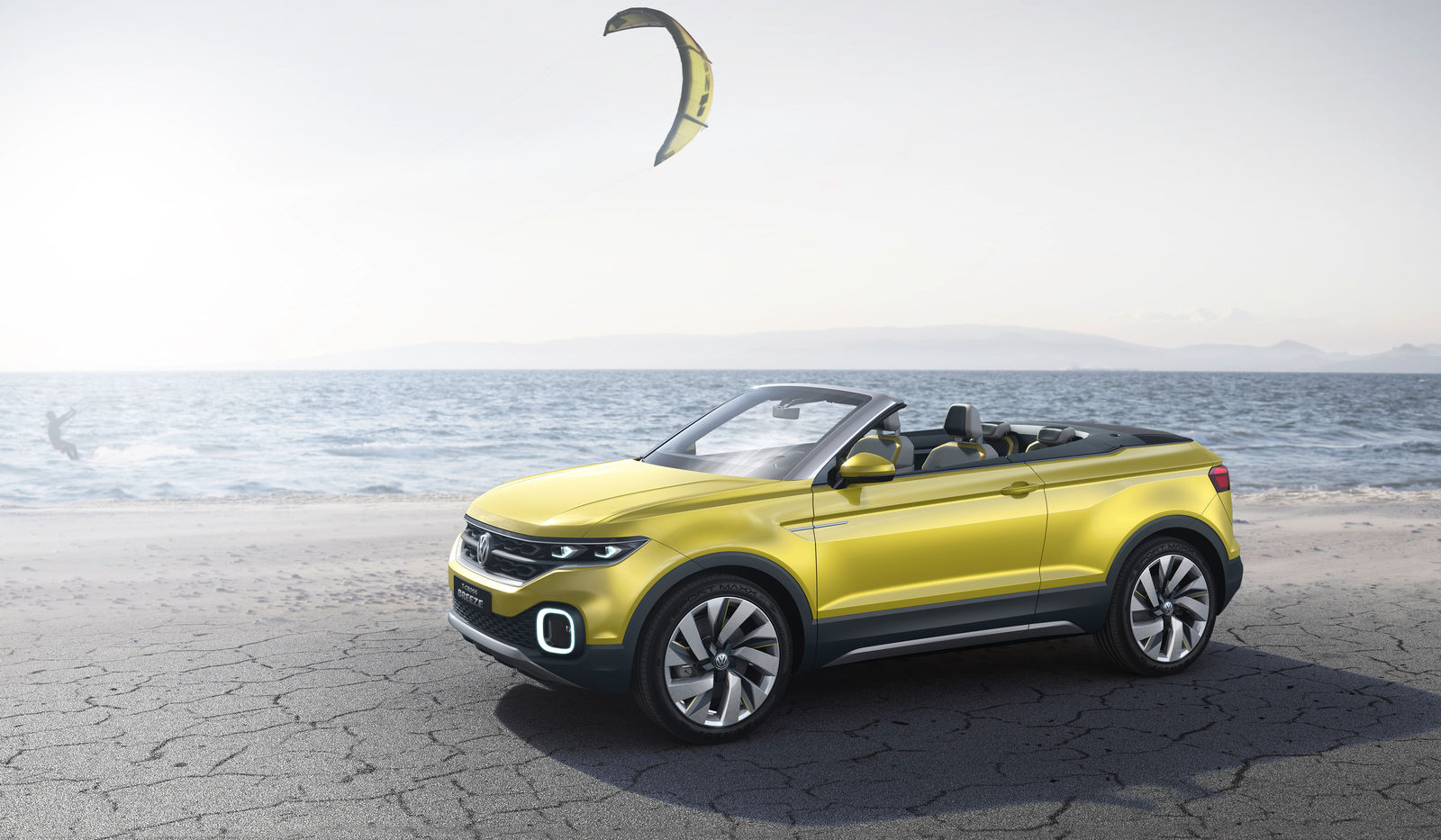 The T-Cross Breeze anticipated what will soon become reality – an open-top SUV for the odd adventure now and then.
Images (11) 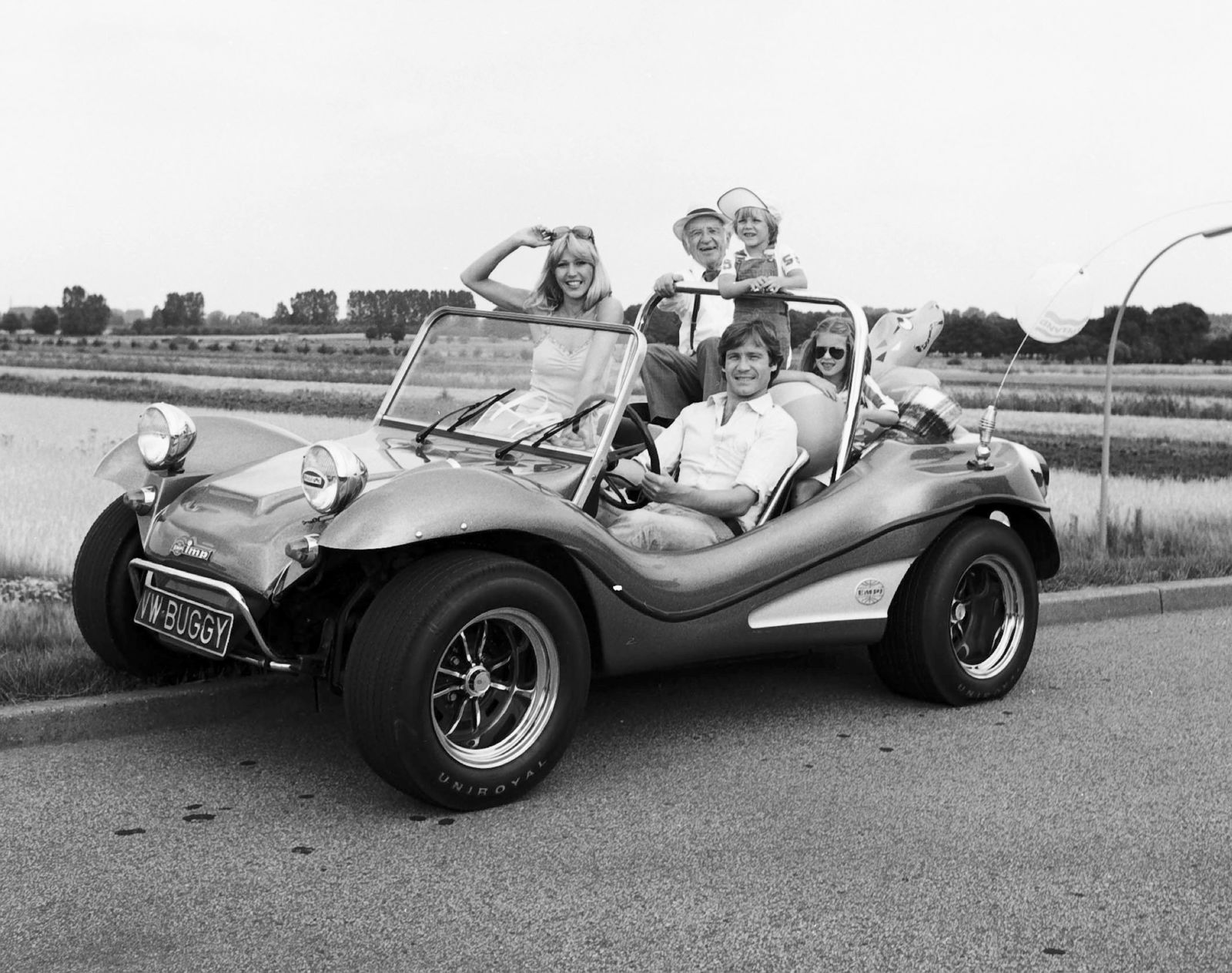 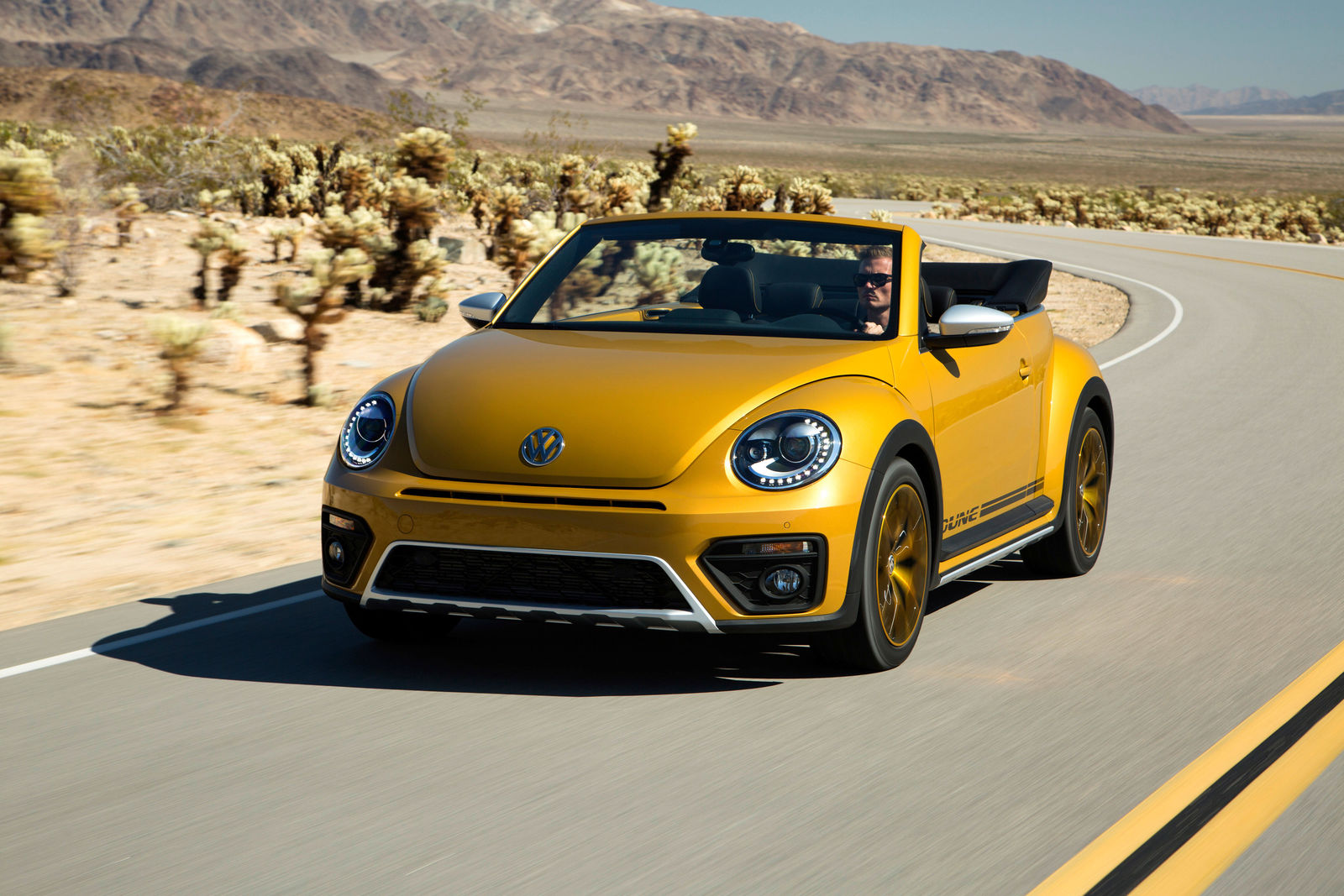 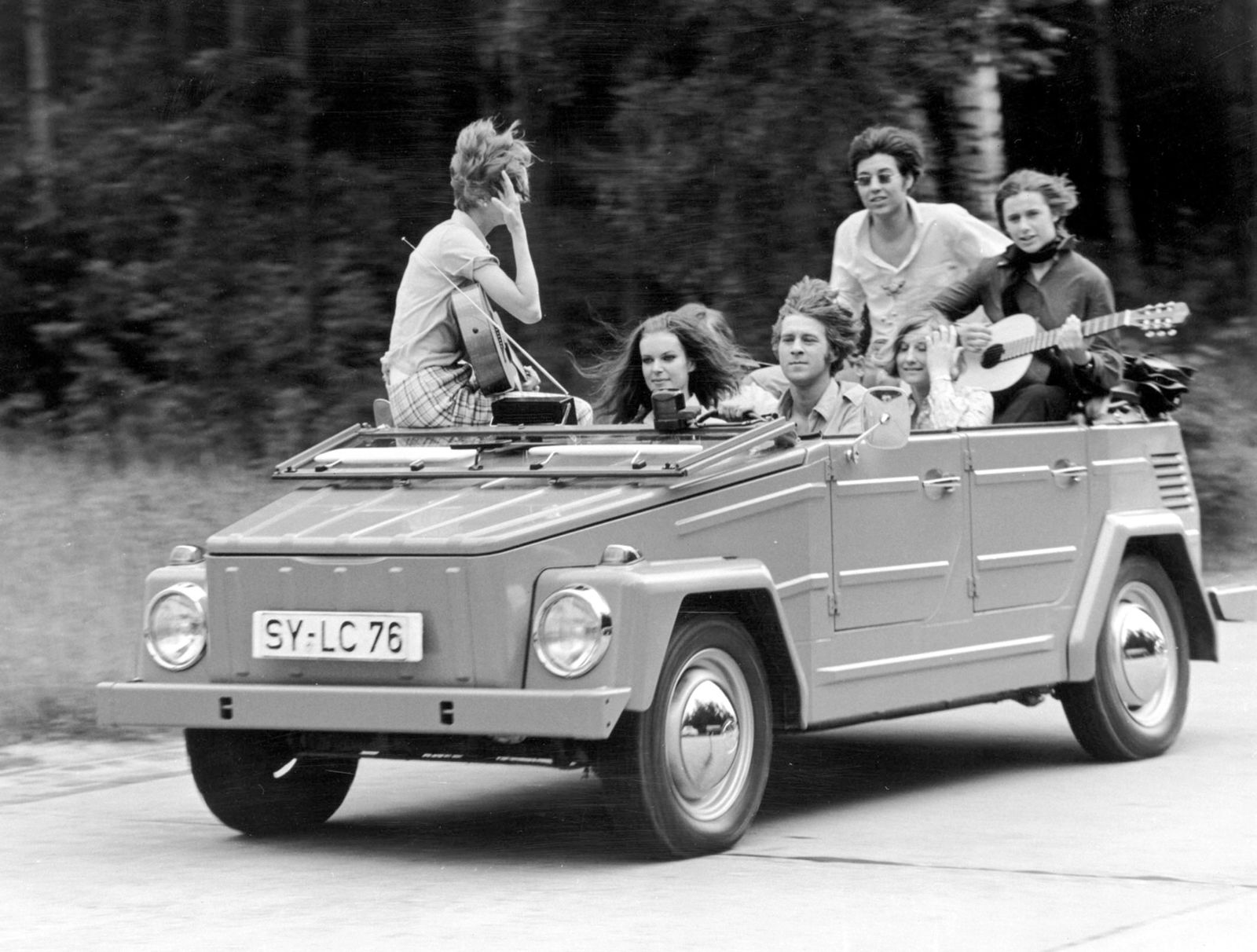 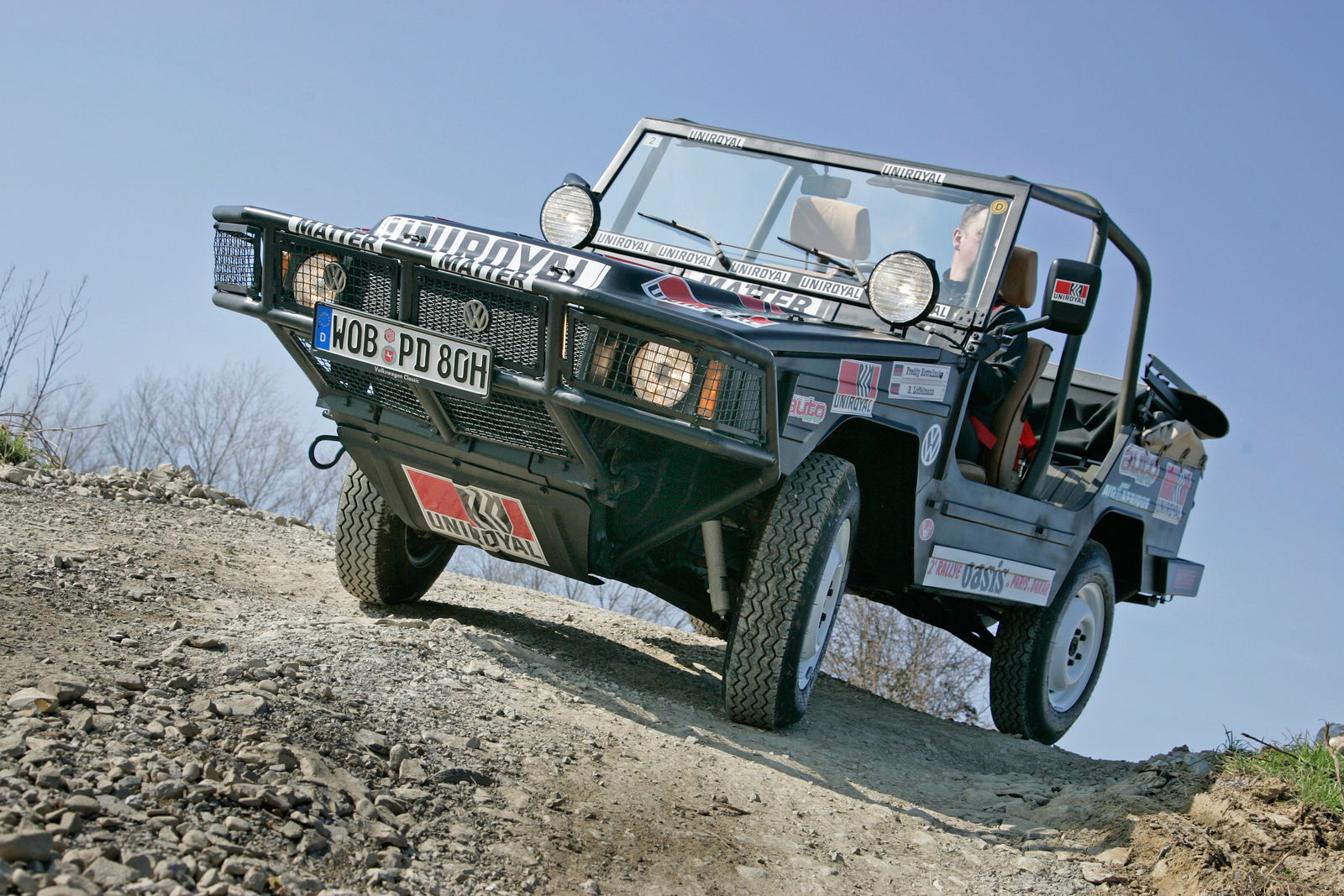 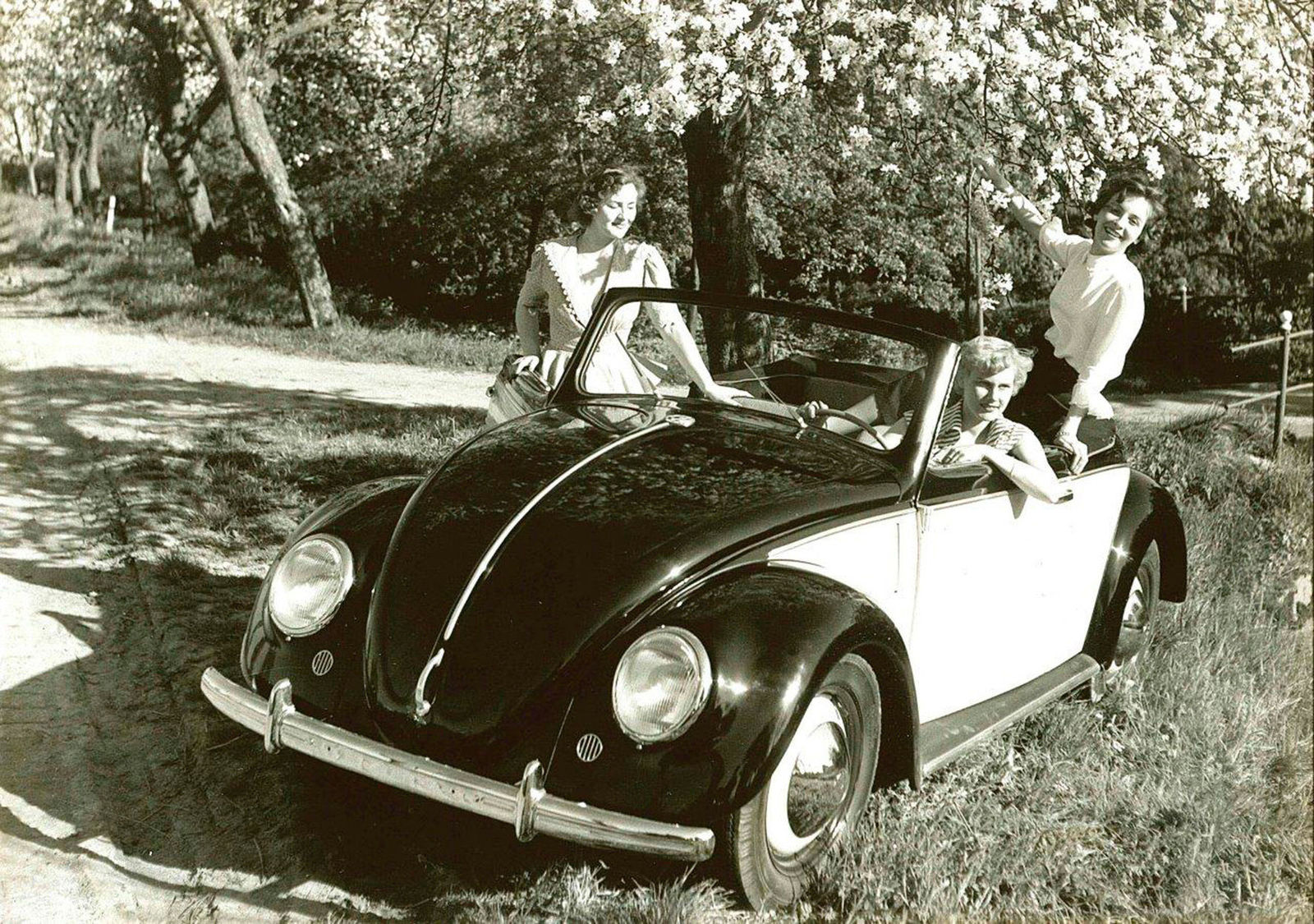 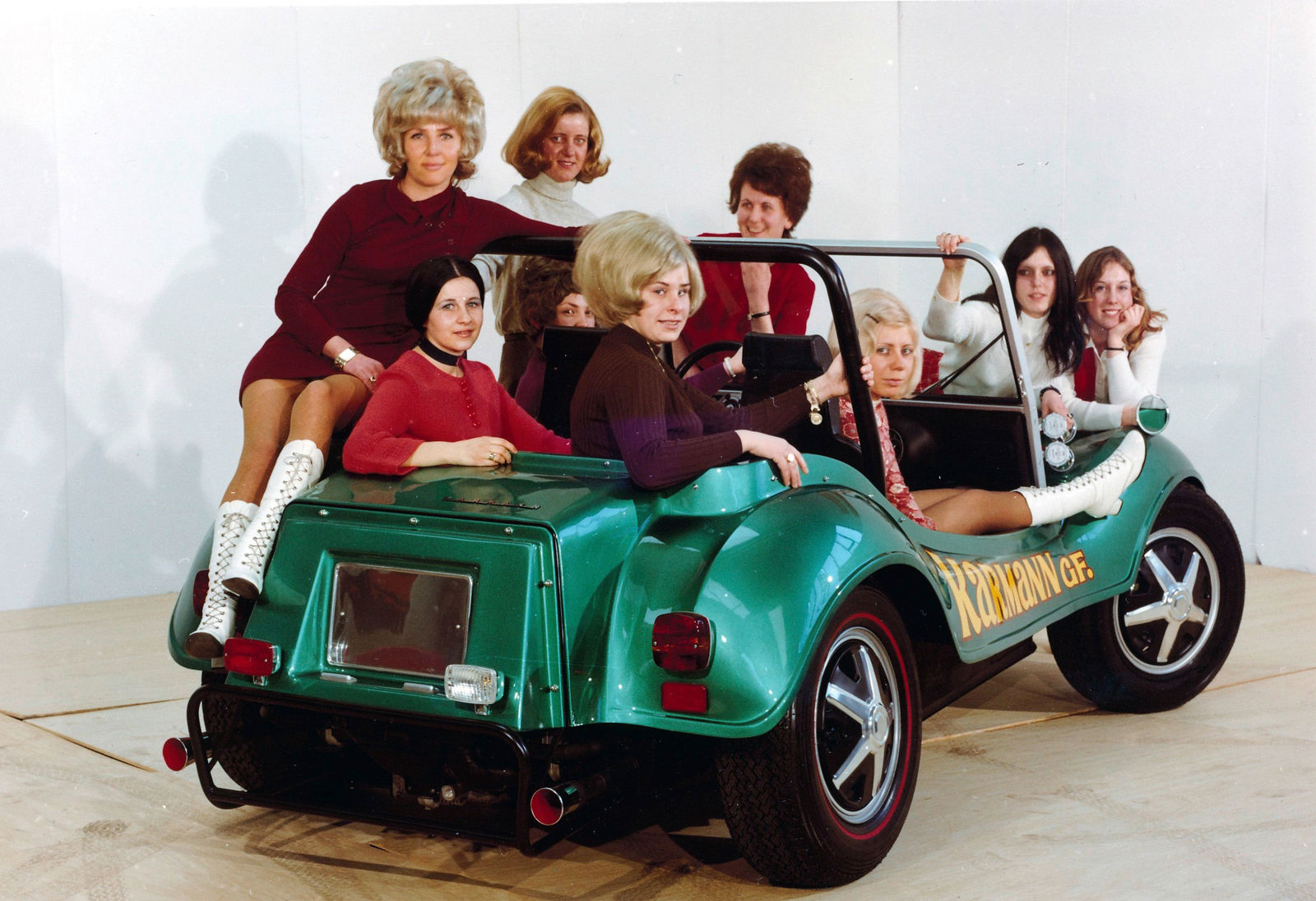 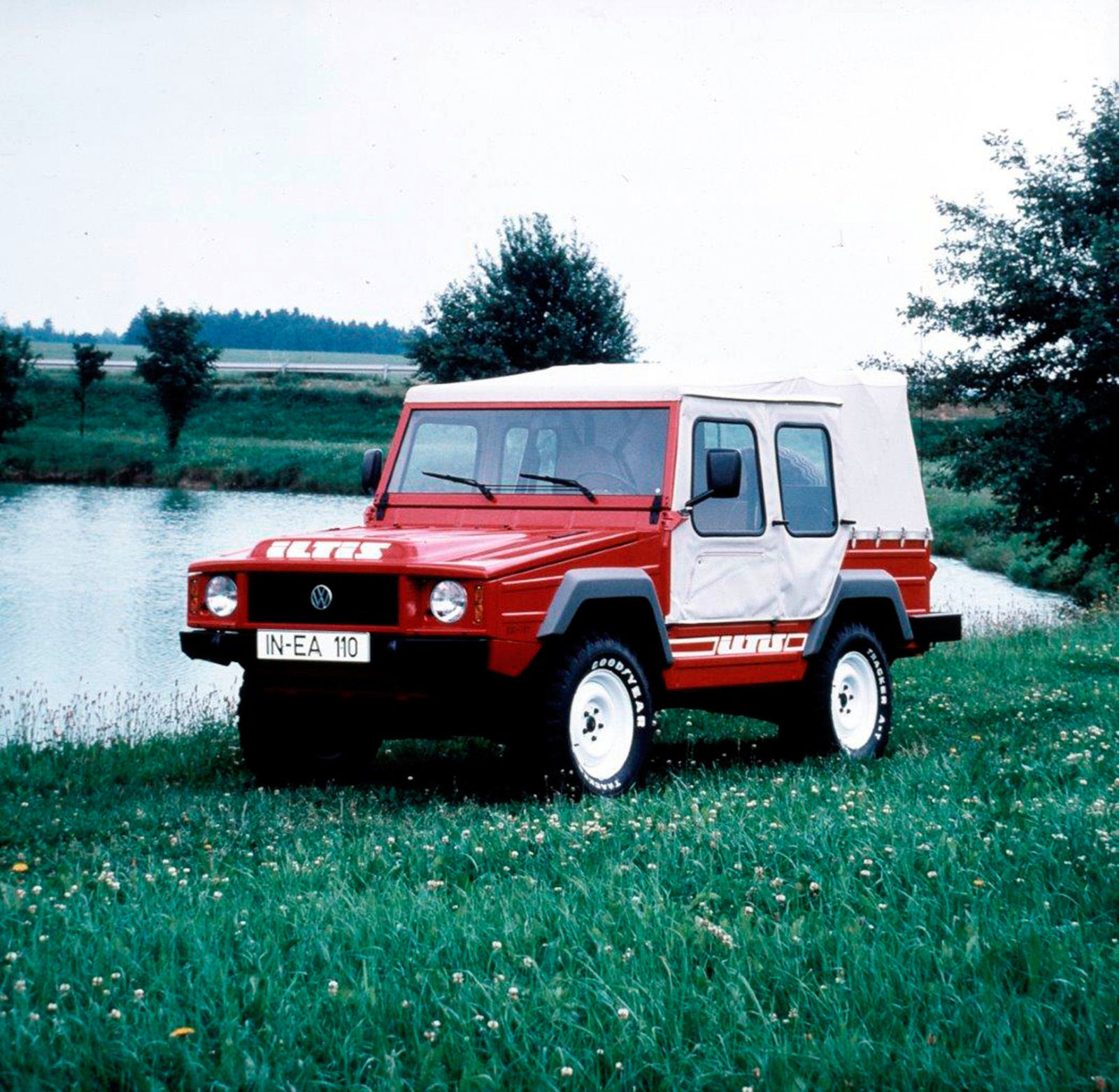 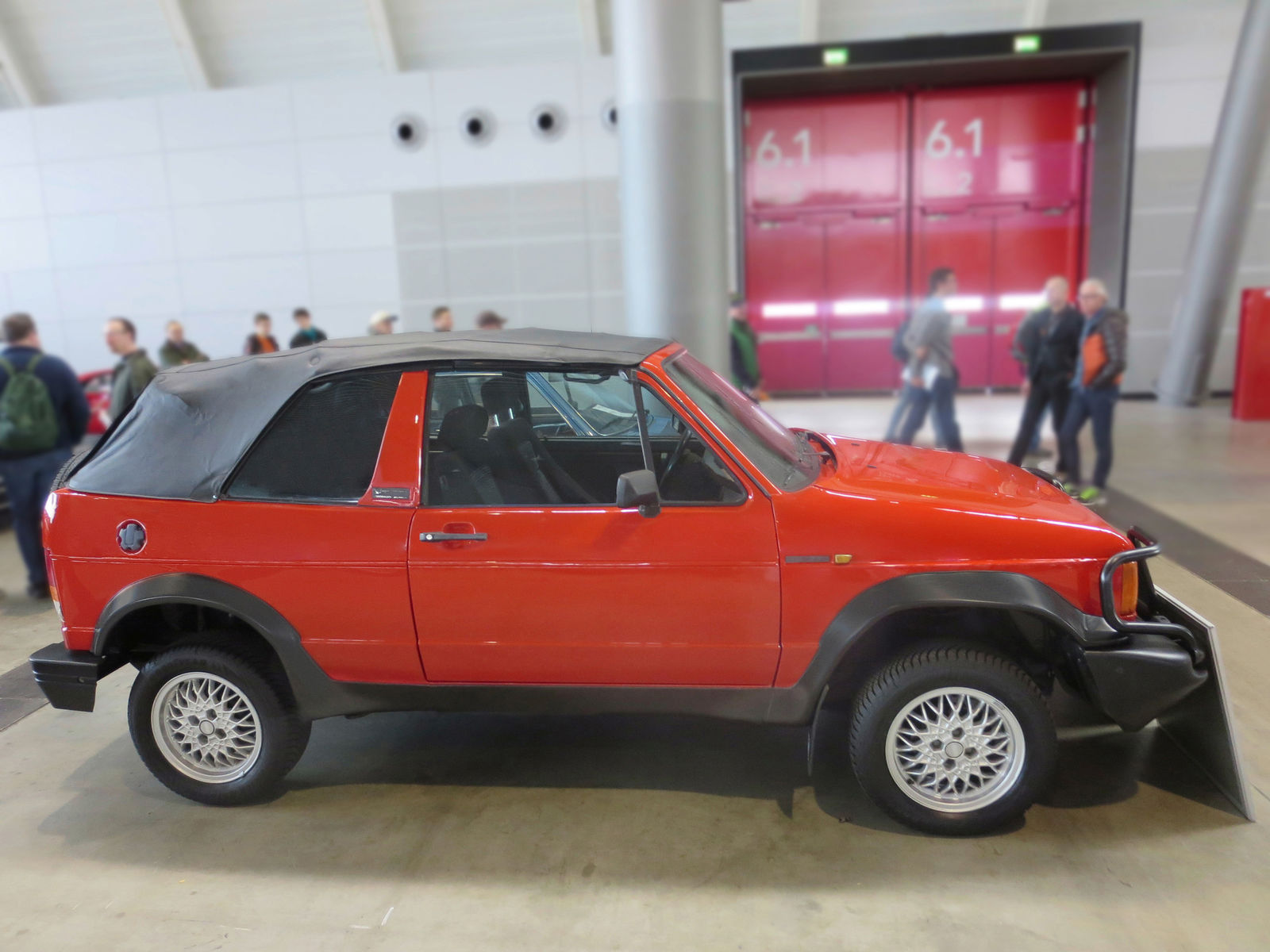 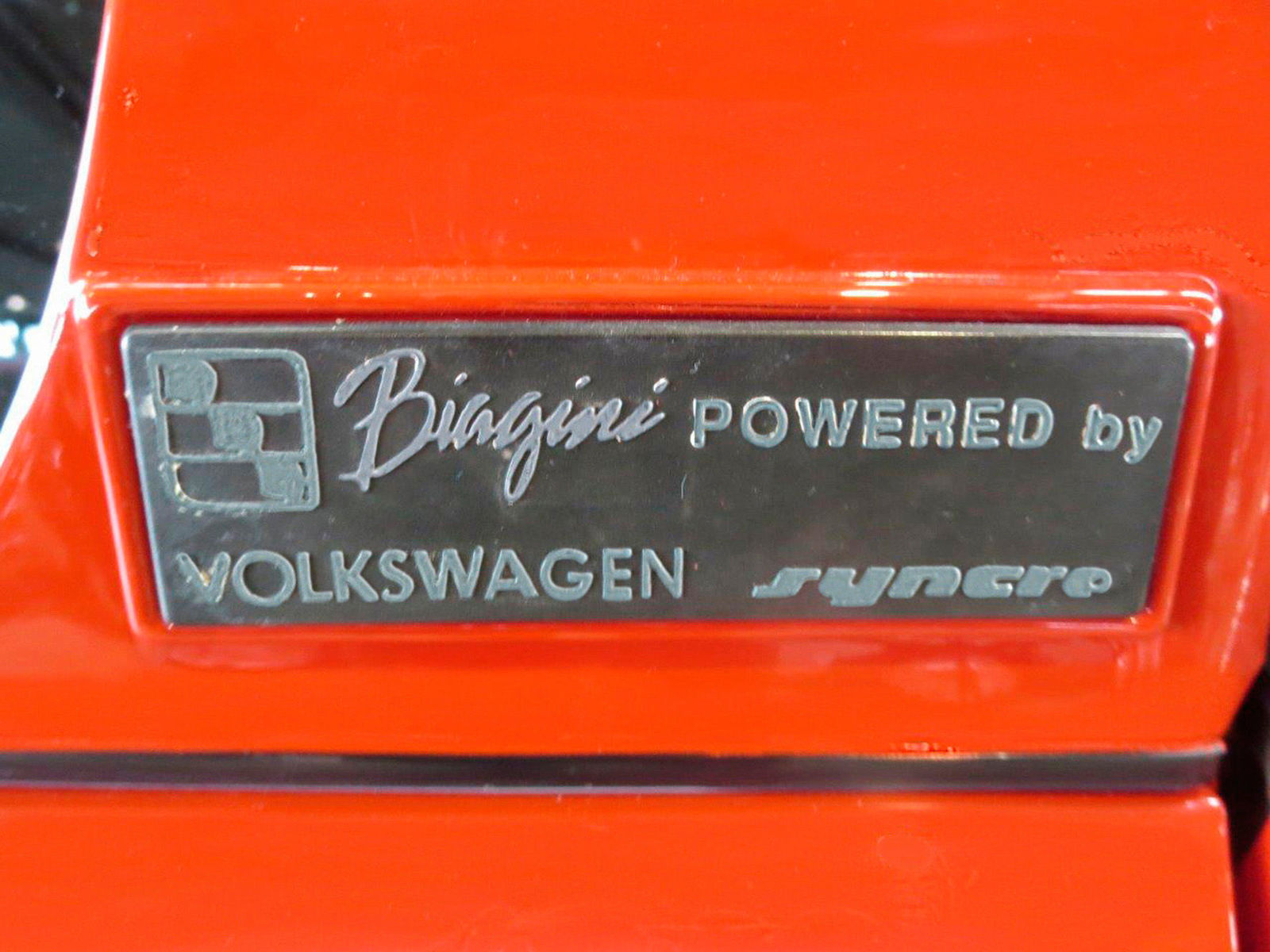