A VW for all occasions – the Müller family and their Touareg 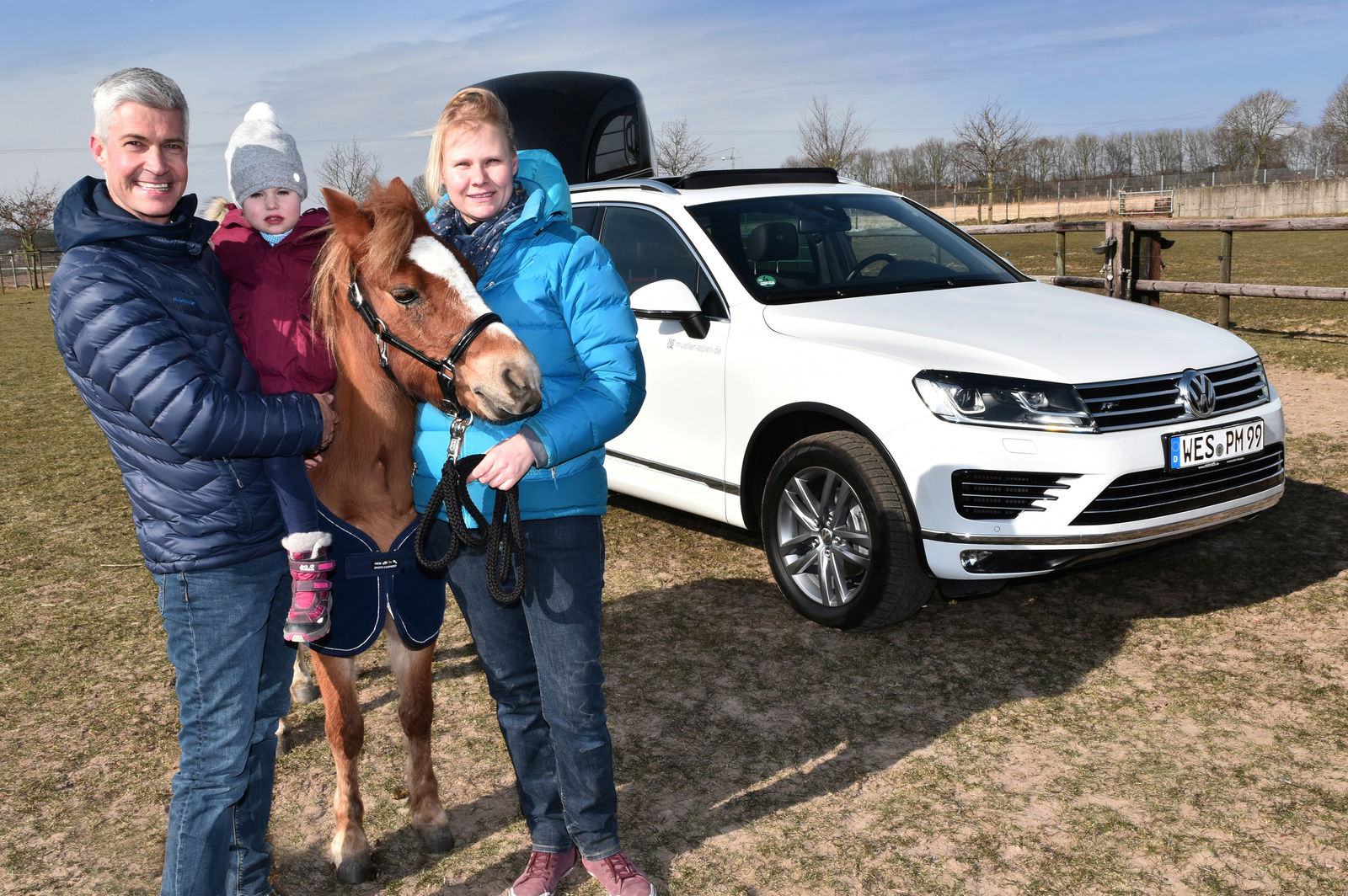 The Müller family and their Touareg, which is used in many different ways.

Whether a weekend shopping trip or luggage for a holiday trip, a horse or an excavator, the VW Touareg belonging to Michael and Daniela Müller transports and tows everything – and always looks good doing it.

Shuttling horses to the riding arena, transporting construction machinery or the drive to the supermarket – while some may need an entire fleet for this huge range of activities, Michael and Daniela Müller can do it all with just one car: a VW Touareg V6 TDI . The large Volkswagen SUV in Oryx White Mother-of-Pearl Effect, inside and out in the sporty R-Line look, is already the third Touareg for this family from Alpen of the lower Rhine region of Germany, unbeatably versatile and a true member of the family.

Optimal for work and leisure
"This car is optimal for us whether for work or leisure", says Michael Müller (43), who runs a building company in the second generation, a family business that employs 20 people and that will be celebrating its 50th anniversary this year. He inherited his love of robust off-road vehicles from his father as well until 2008 when the first generation of the VW Touareg won him over. "Back then, the wave of SUVs was building gradually and we liked the Touareg from the start", says Mr Müller. "It was more of a passenger car. You sat down in it and immediately felt at ease". In addition to the comfort of a luxury-class saloon, the Touareg also offers a towing capacity of 3.5 tonnes, so it's no problem to transport an excavator to the next building site. "You almost don't notice that there's a trailer back there", says Mr Müller. No wonder with 262 PS. 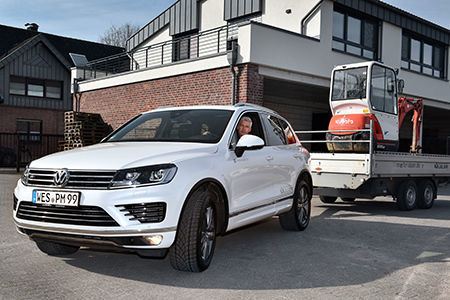 Can easly drag a big excavator - the Touareg. 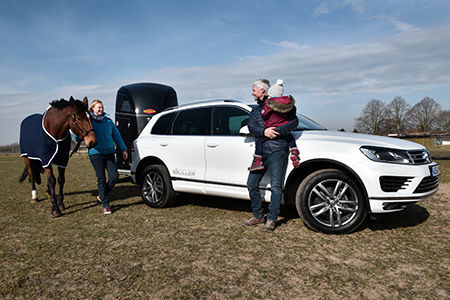 The Touareg is comfortable with every terrain, even on a paddock

The Touareg is also perfect for the hobby that Michael and Daniela Müller (37) share: horse riding. They have both had lots to do with horses from a very early age and have become class L eventing riders. There is a picture of Daniela on a country ride hanging right in the hallway of the Müller's home. The couple even met through their mutual riding club, RV Seydlitz Kamp 1884; that was 30 years ago. Later, Daniela rode Michael's gelding, Zigan. "And I just never gave up sharing this horse", Michael said with a grin – and smiled at his wife.

Family, horses and company all under one roof
Since their daughter Fine was born three years ago, they haven't participated in any riding tournaments, and the once regular drives with the 12-year-old mare Scarlett to the riding arena for training have also become a rarity. Scarlett, the 10-year-old pony mare Amber, and the now 33-year-old pensioner Zigan practically live with the family under one roof. Müller's parents bought an old farm on the edge of the town of Alpen, initially as a new location for the building company. Later everything was renovated little by little and extended; the former stables were turned into three horse boxes, and there is a riding arena and large pasture directly behind the house. When Michael Müller comes down the stairs in the morning from the living area, he can either go to the right to the material and vehicle halls or through the left door to check on the horses first and bring them out to the pasture. 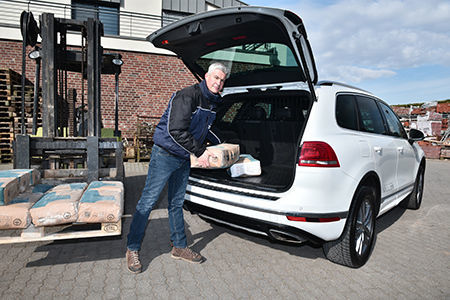 To mention some of the benefits of the SUV: convenience and a lot of storage space for heavy loads 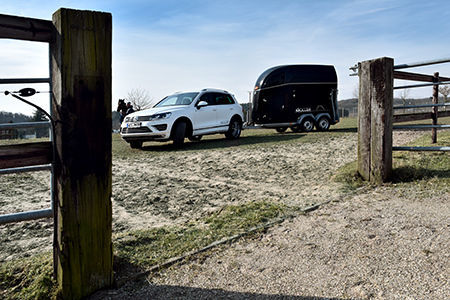 Enjoyable for human and horses, due to the adjustable air suspension, the stoic straight-line motion and the Adaptive Cruise Control (ACC)

When driving with the horse trailer in tow and horses on board, Daniela Müller appreciates the Touareg not only for its comfortable, adjustable air suspension but above all for its stoic straight-line motion and Adaptive Cruise Control (ACC). "You set the desired speed and then it drives automatically, always maintaining the perfect distance to the car ahead. The system is so gentle that it is very pleasant even for the horses", she says.

And then there is the comforting feeling of always being able to rely on the car. "When we had heavy snowfall on Christmas Eve a couple of years ago, I was able to drive through the snow drifts with the horse trailer without a problem. I was the only one who could still drive and didn't need to be pulled out", Daniela remembers their second family Touareg fondly. It also protected her and her daughter about one-and-a-half years ago in an accident when another vehicle took her right of way. "We were fine – not a scratch. Fine didn't even cry", Daniela Müller said. 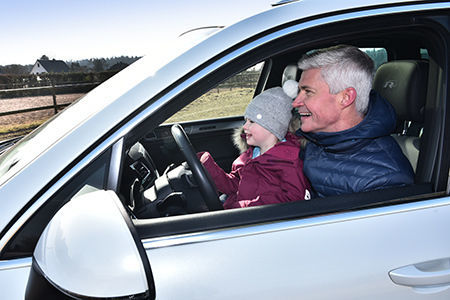 Fine the young daughter of the Müller family feels quite safe and has a lot of fun discovering the vehicle. 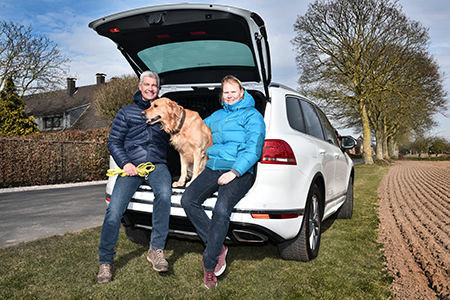 Everybody finds the right place to fit in the car - as well as Eddy, the dog of the family.

There was no question that the replacement car would be another Touareg. The family dog Eddy has also got used to the third model quite quickly. The three-year-old golden retriever immediately took to his usual spot in the large luggage compartment.

Now, the die-hard fans of the Touareg are very curious about the 23rd of march, which is when the new Touareg will have its world premiere in Bejing. Certainly, nobody in Alpen will be surprised to see the new edition standing in front of the Müller's door. 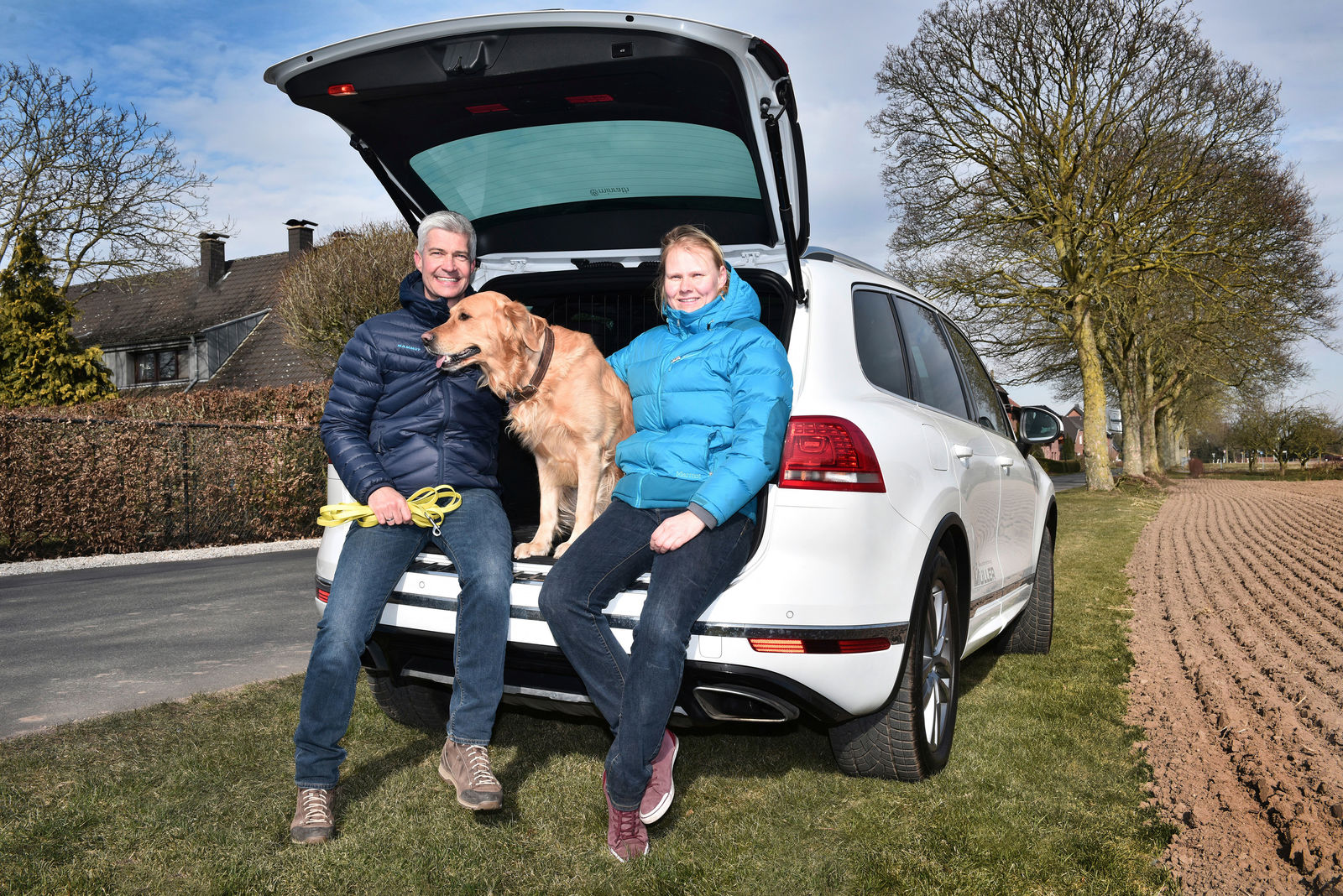 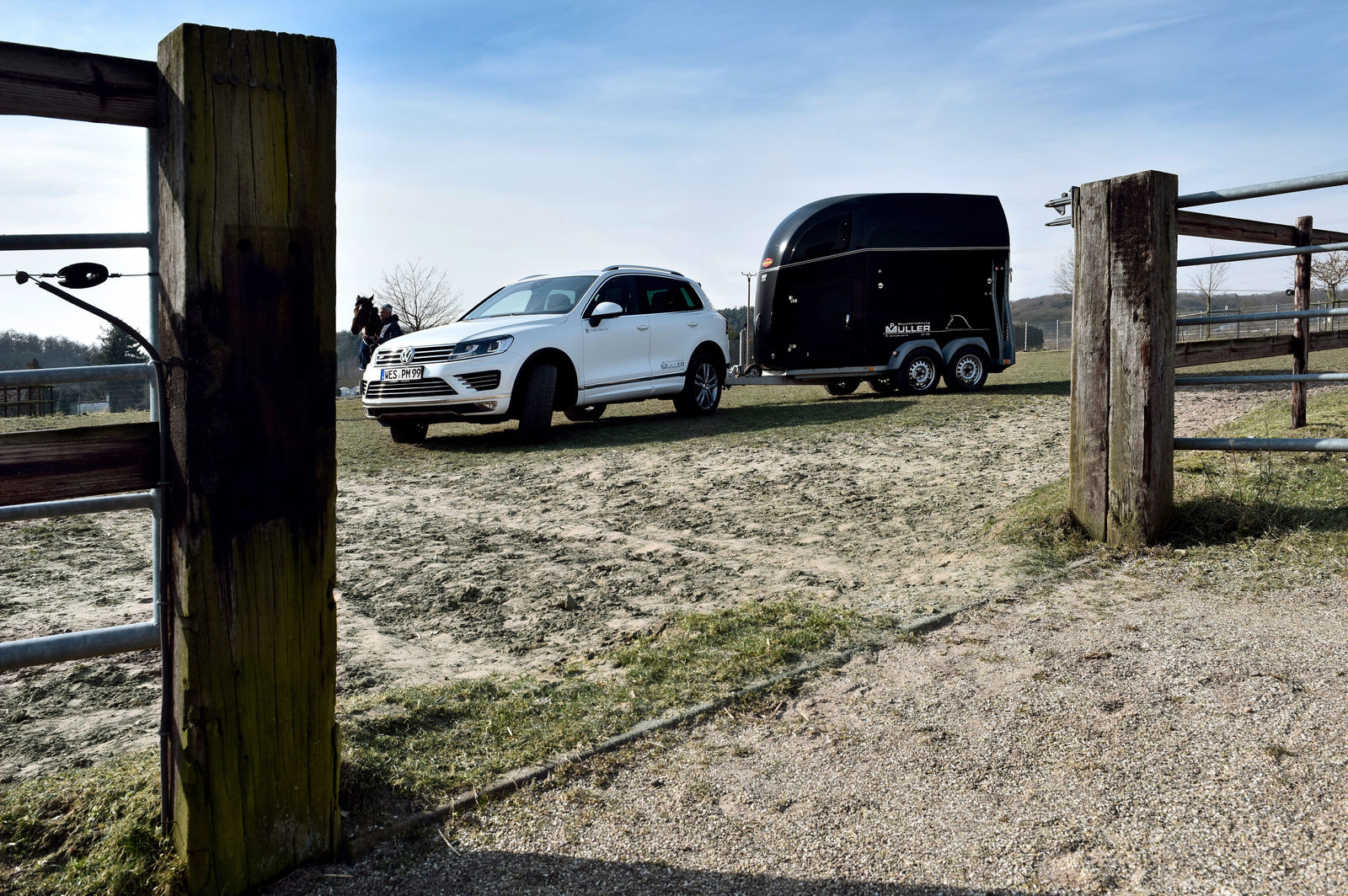 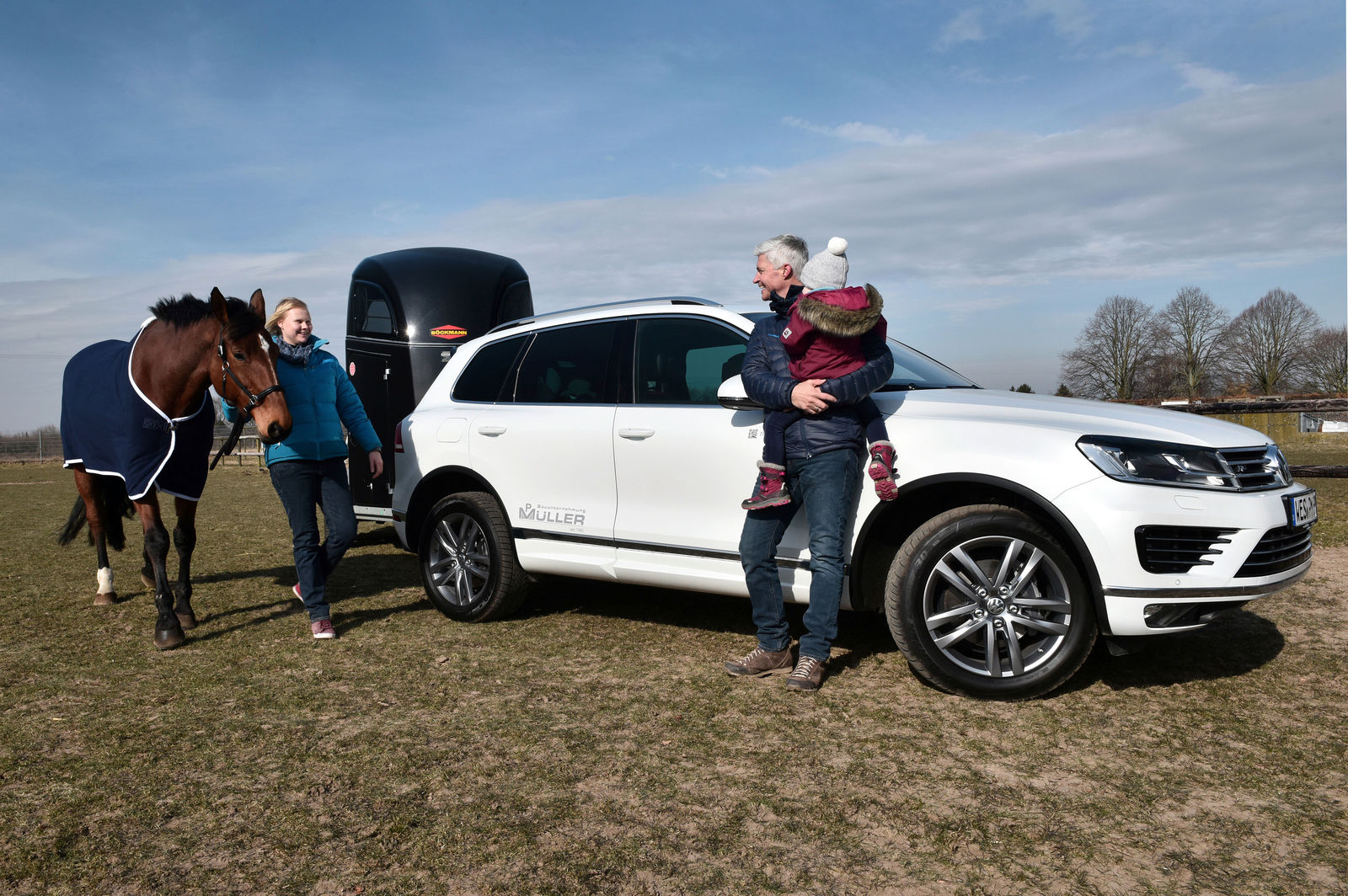 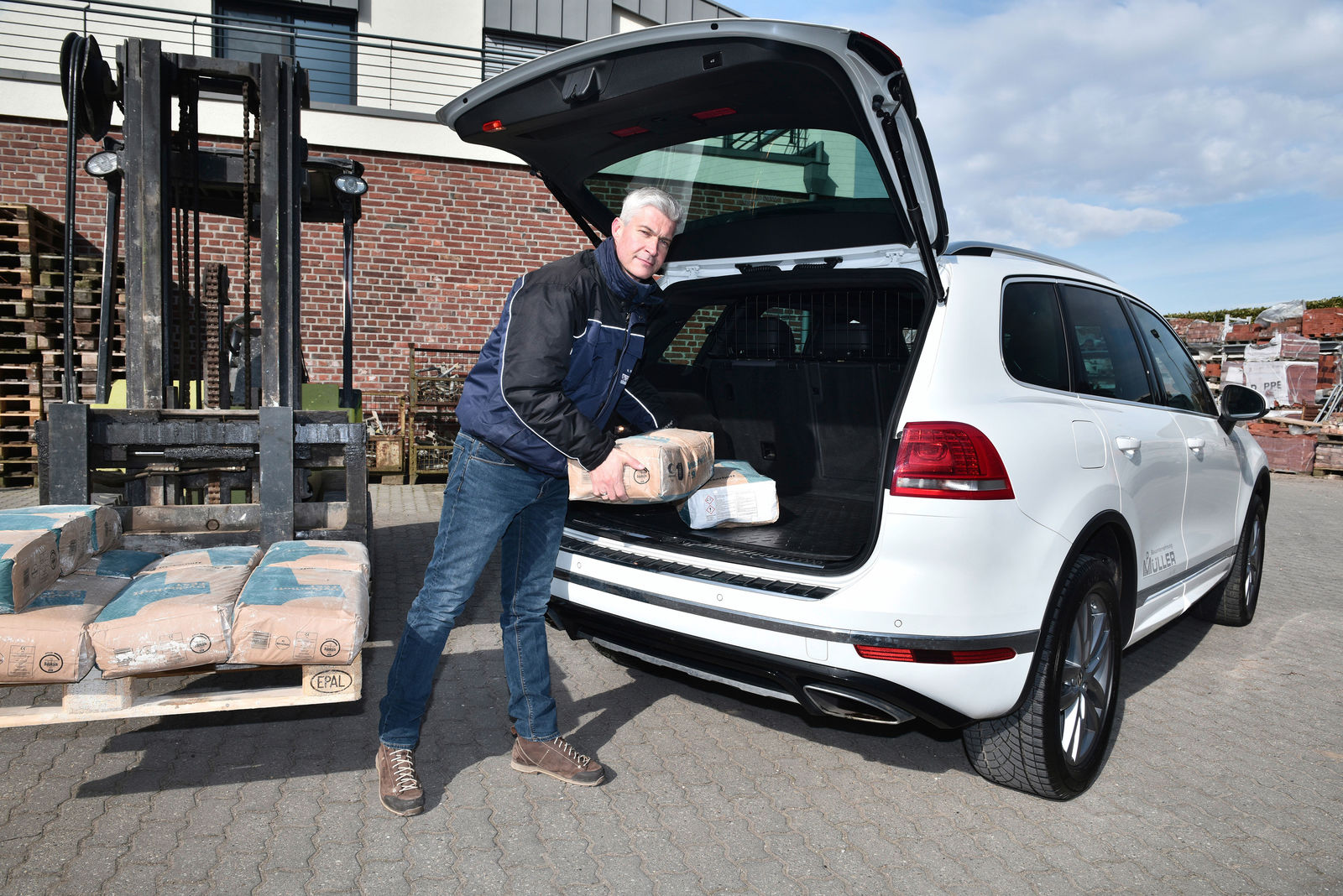 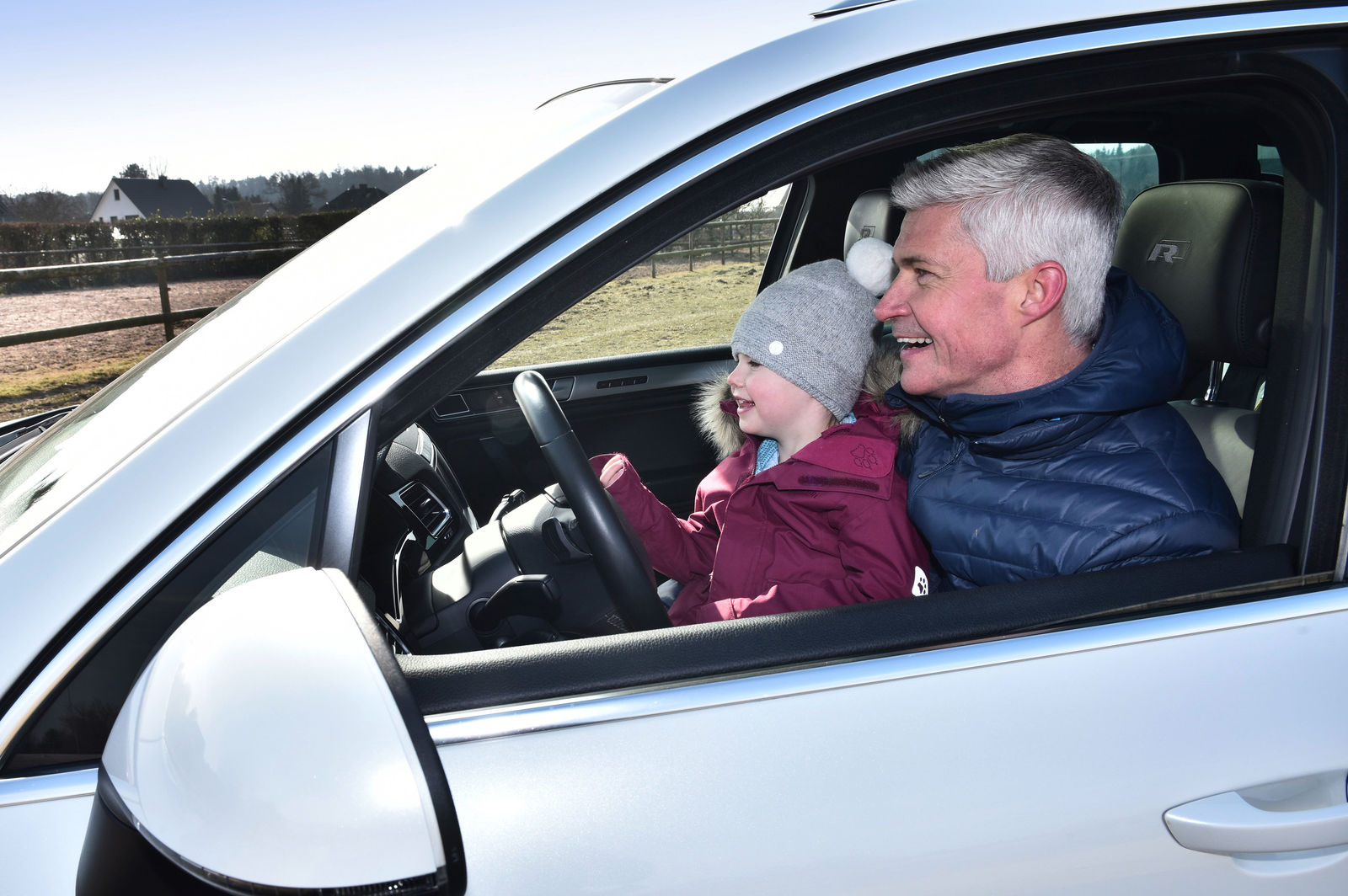 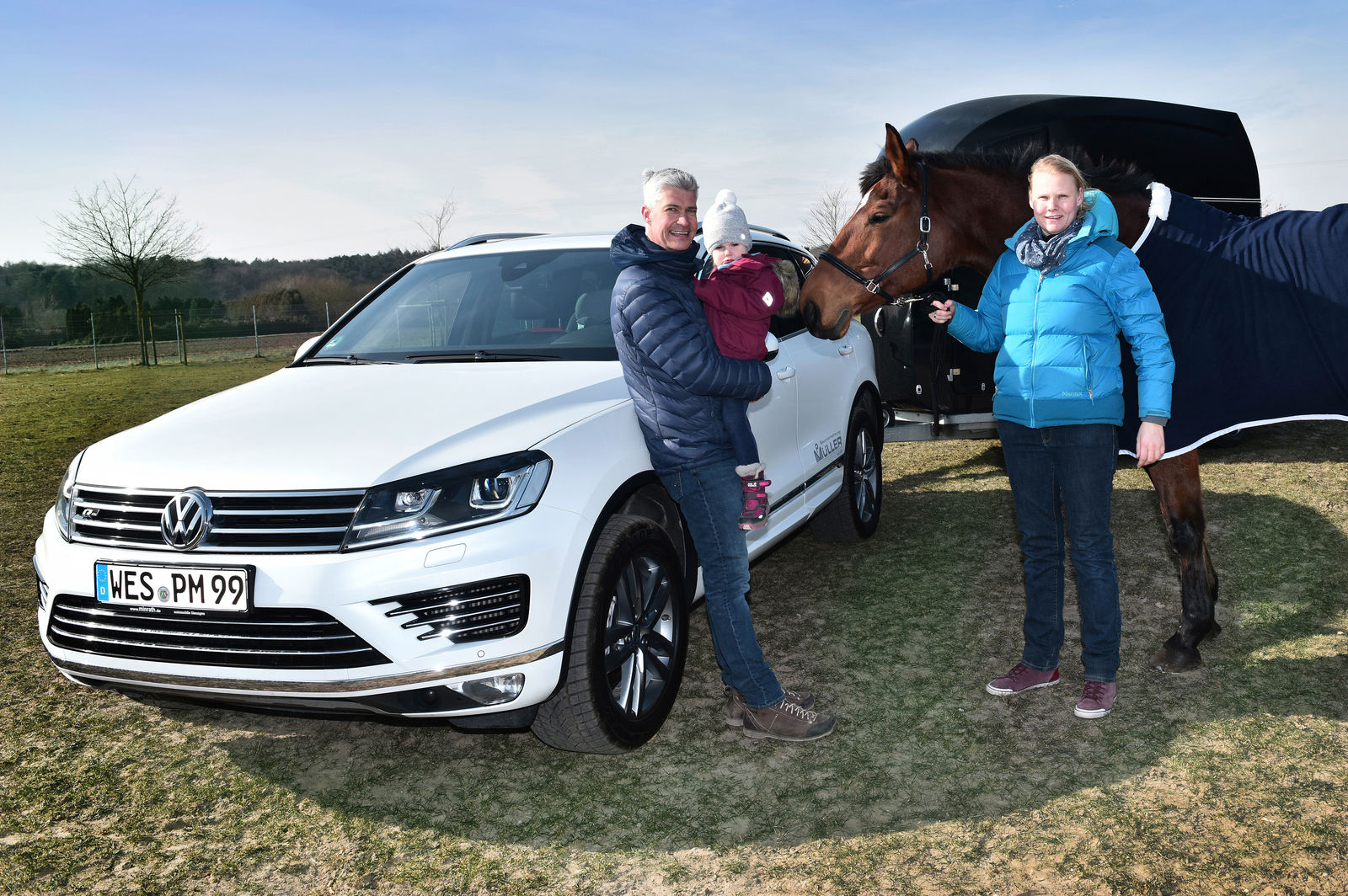 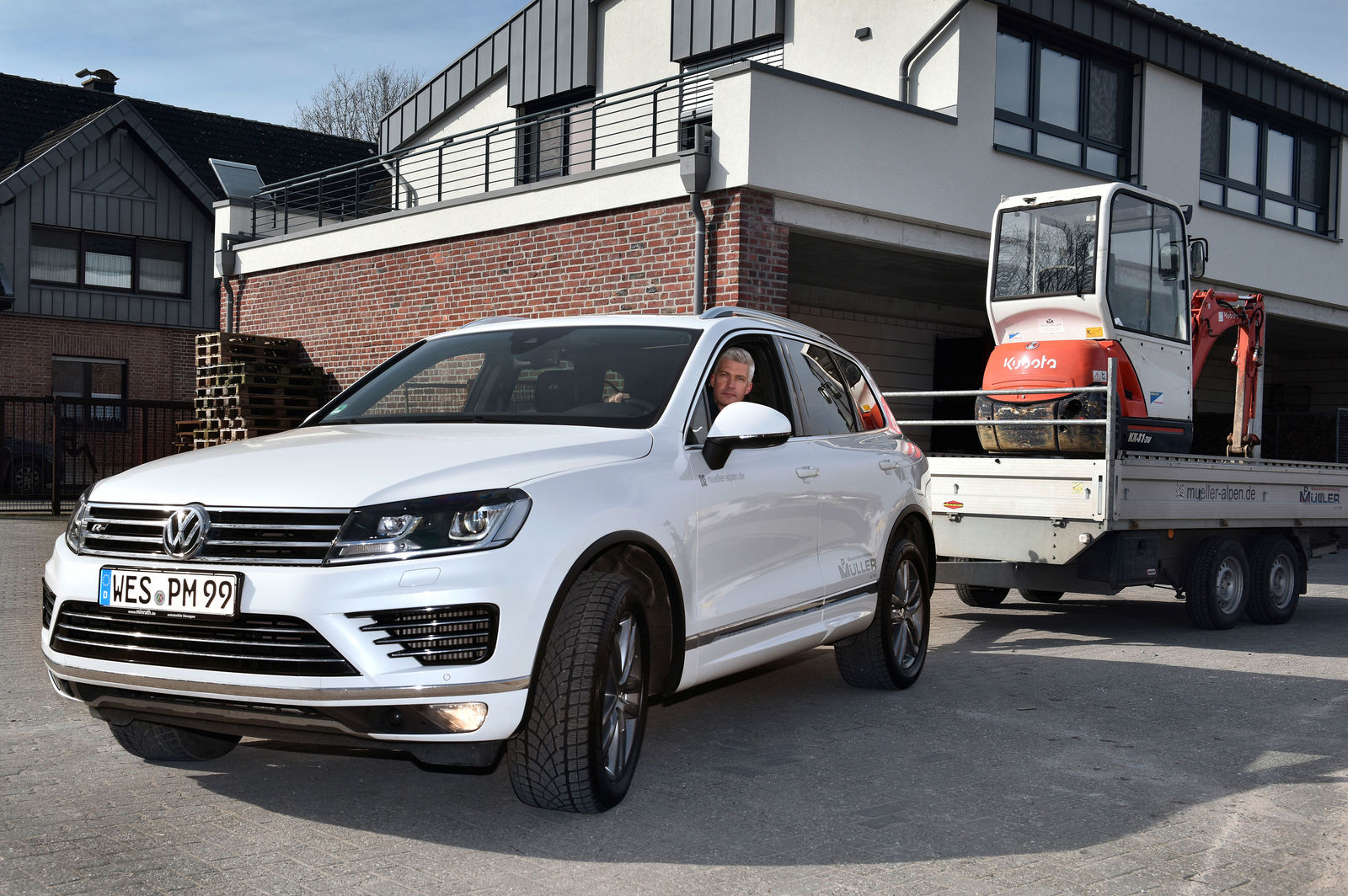