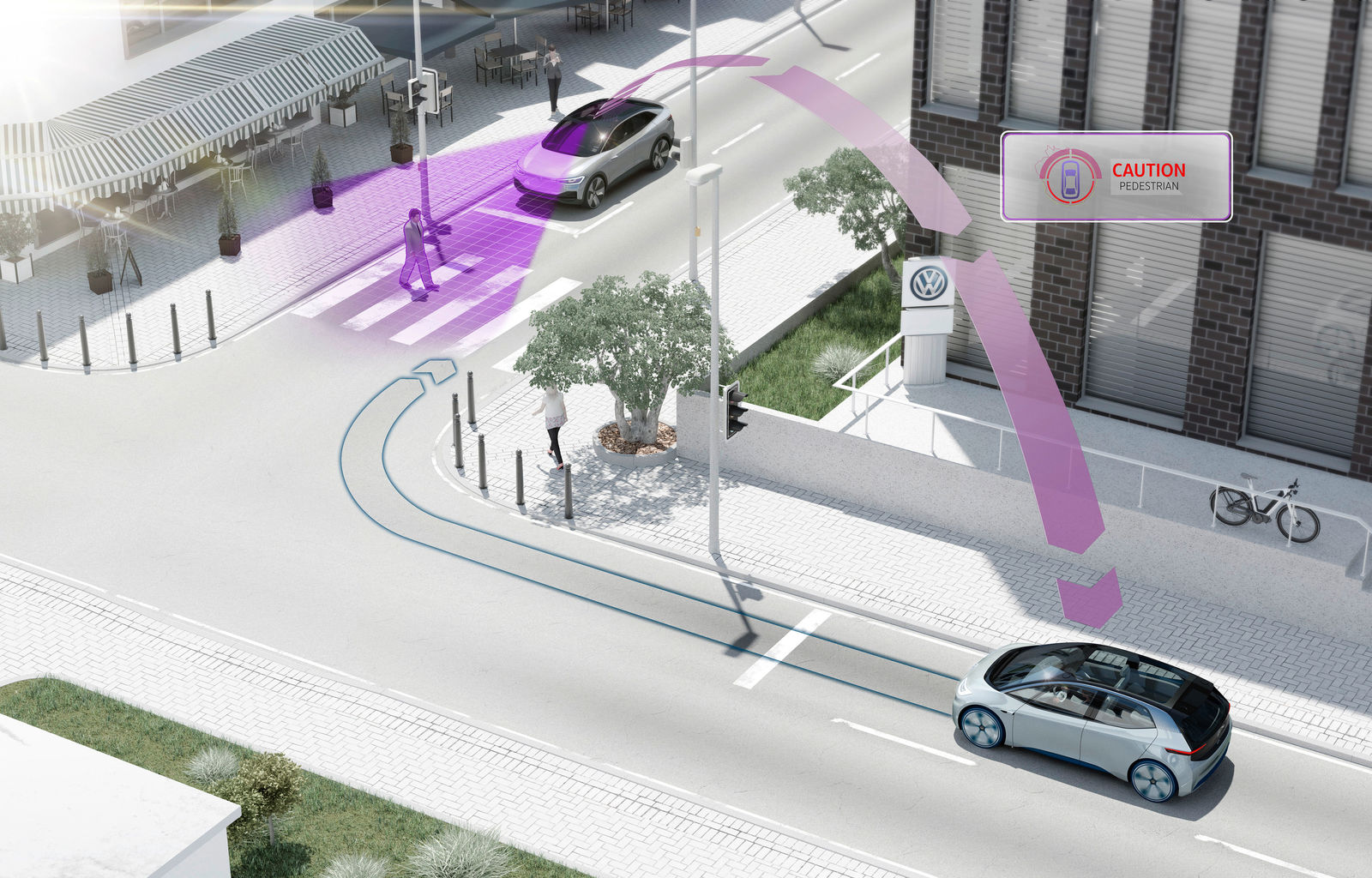 With the aim of increasing safety in road traffic, Volkswagen will enable vehicles to communicate with each other as from 2019

Connectivity between different vehicles as well as between vehicles and transport infrastructure in the vicinity is another important step towards connected motoring that aims to reduce road accidents or minimise their consequences. As from 2019, Volkswagen will therefore start fitting its first models with pWLAN as standard in order to serve as an additional communication technology for the exchange selected information relevant to traffic between cars made by different manufacturers. This will involve information being exchanged both between vehicles (car-to-car), as well as between vehicles and the transport infrastructure (car-to-X)*. This will, for example, enable information about the current traffic situation, accidents and other situations relating to traffic conditions to be shared with the local environment, within a radius of approx. 500 m, even faster than has been possible in the past.

The technology used by Volkswagen is based on the IEEE 802.11p (pWLAN) standard, which the automotive industry has standardised and tested for direct, non-proprietary inter-vehicle communication as well as between vehicles and transport infrastructure and in international markets.

Using this technology, specially developed and validated for the requirements of automotive applications, it is possible to share information about the current traffic situation, warnings or even sensor data with the local environment within a few milliseconds. This extends the vehicle's coverage by several hundred metres, virtually making it possible to look round the corner.

This gives customers an added advantage, as it uses a special frequency band intended for road safety and traffic efficiency. Thanks to the localised nature of data exchanged using this band, no data is stored centrally, meaning that there are no ongoing communications costs and it does not rely on mobile phone network coverage.

The strategy that Volkswagen is pursuing is to include pWLAN technology in the basic specifications of its models as standard, in addition to mobile phone connectivity. "We want to increase road safety with the aid of networked vehicles, and the most efficient way of achieving this is through the rapid roll-out of a common technology", explains Johannes Neft, Head of Vehicle Body Development for the Volkswagen brand: "What matters most is that the technology is used consistently, and by as many manufacturers and partners as possible."

When it is launched in 2019, the system will be based on warnings and information on local traffic risks that arise at short notice.

Within the limits of the system, the new technology is capable of identifying potential traffic hazards. Examples would include a car making an emergency stop or the on-board sensors detecting black ice. Within a few milliseconds, this information can be shared with the local environment, allowing other road users to react to this risky situation appropriately.

As the effectiveness increases through a large number of users, Volkswagen is cooperating with authorities, ministries of transport and other automobile and transport industry partners, working on projects to accelerate the spread of the technology through to its inclusion in serial production.  At the same time, joint efforts are being undertaken with the partners to find ways of meeting the high requirements placed on data protection (i.e. the processing of personal data).

Once police forces and emergency services are also equipped with pWLAN technology, it will be possible for drivers to receive advance information on how far away approaching emergency vehicles are and the direction they are travelling in – often long before the vehicle can be heard or seen.

In addition to this, transport infrastructure operators in Germany, the Netherlands and Austria have announced plans to equip trailers used to block off roadworks with pWLAN technology, in order to reduce the risks of rear-end collisions in the area of roadworks on motorways.

In its push towards automated and cooperative driving, Volkswagen is working on enabling other transport infrastructure components (e.g. traffic lights) and other road users to be integrated in future, in order to improve road traffic safety with the aid of pWLAN technology.