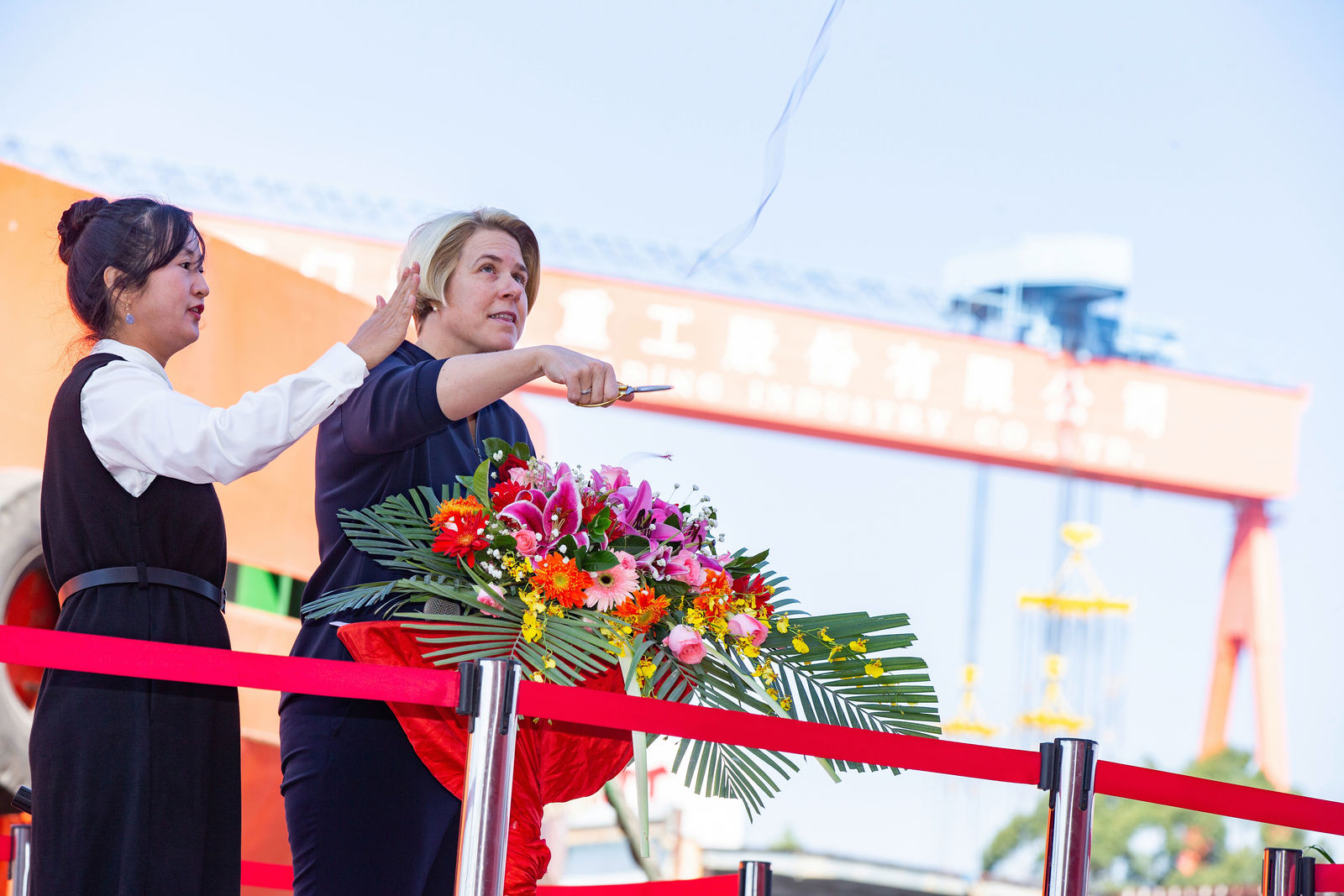 Thomas Zernechel, Head of Group Logistics, commented on the ship’s strategic importance for Volkswagen Group's vehicle logistics: "We are entering a new field here to reduce emissions. Both ships are the first overseas car freighters in the world to be LNG-powered. In addition to the increasing use of LNG trucks, conversion of our many rail transports to green electricity and the use of biofuel in the short sea segment, the two new LNG ships represent an important building block for our strategic goal of climate-neutral logistics.

Christiane Eckert, Head of Strategy and Environment in Group Production, gave the ship its name with the formula: " Dear ship, I name you SIEM CONFUCIUS, and may your first embrace with the sea be successful. May you always sail in calm seas with seven feet under the keel!” Eckert then named the second ship SIEM ARISTOTLE. "I am looking forward to the deployment of the first two LNG ships from next year, an important milestone for our production strategy 'goTOzero' with the goal of production and logistics not harming our environment," Eckert said.

Both ships will replace two of the nine conventional heavy oil-powered cargo ships currently used by Group logistics on the Atlantic between Europe and North America. The SIEM CONFUCIUS will be integrated into this service from January 2020 after its transfer from Asia to Europe. The second ship will start operations in spring 2020 in the same area.

The two technologically advanced ships, each 200 meters long and 38 meters wide, have 13 car decks and a capacity of 7,500 RT, which corresponds to approximately 4,700 vehicles of the Volkswagen Group model mix. So far, only a few smaller ships for rolling cargo have been built with LNG propulsion for short-haul traffic; for overseas vehicle shipments, Group logistics is a pioneer for this type of propulsion.

Both vehicle transporters are powered by a 12,600 kW dual-fuel marine engine with direct injection and exhaust gas treatment from MAN Energy Solutions of the Volkswagen Group. In addition to liquid, deep-frozen natural gas, they can also be operated with environmentally friendly e-gas produced via Power-to-X or biogas. In eco-speed mode, the ships are running 16.5 knots (30.6 km/h). With their two tanks, each holding 1,800 cubic meters, the transporters have similar vehicle capacities and ranges compared to conventional heavy oil-powered ocean freighters.

"We believe that the switch to LNG as marine fuel is the most important basis for a maritime energy revolution," commented Uwe Lauber, CEO MAN Energy Solutions. "In a second step, gas-capable ships can be operated with synthetically produced, climate-neutral fuels and are therefore future-proof. With this project, Volkswagen is pioneering the decarbonisation of global trade flows".

The Volkswagen Group Logistics organises, coordinates and accounts for around 7,700 ship departures worldwide each year. Several hundred liner ships and eleven car freighter charter ships sail the world's oceans for the Group each day. Every year they ship 2.8 million new cars. In addition, there are 250,000 container loads on ships carrying construction and spare parts. 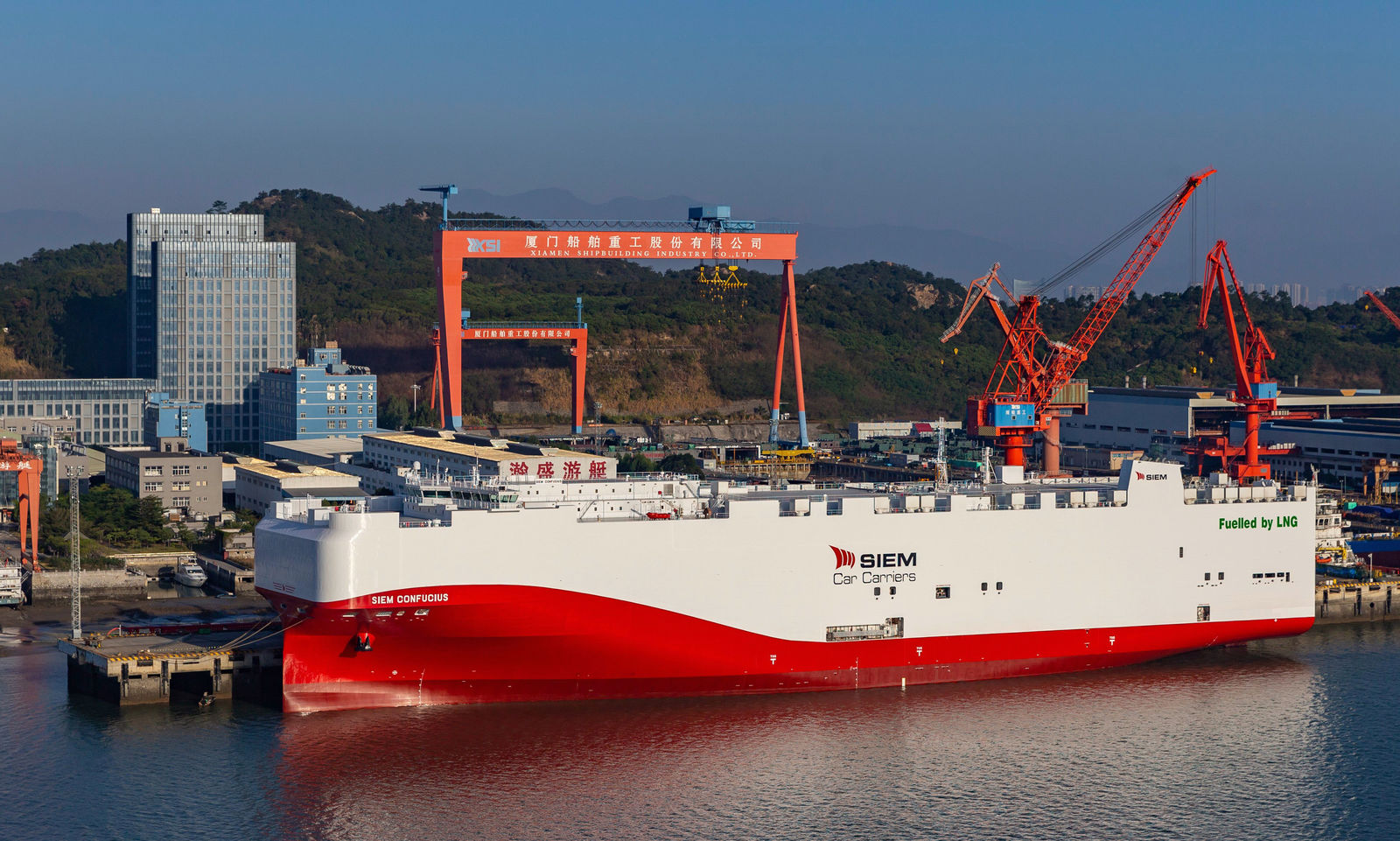