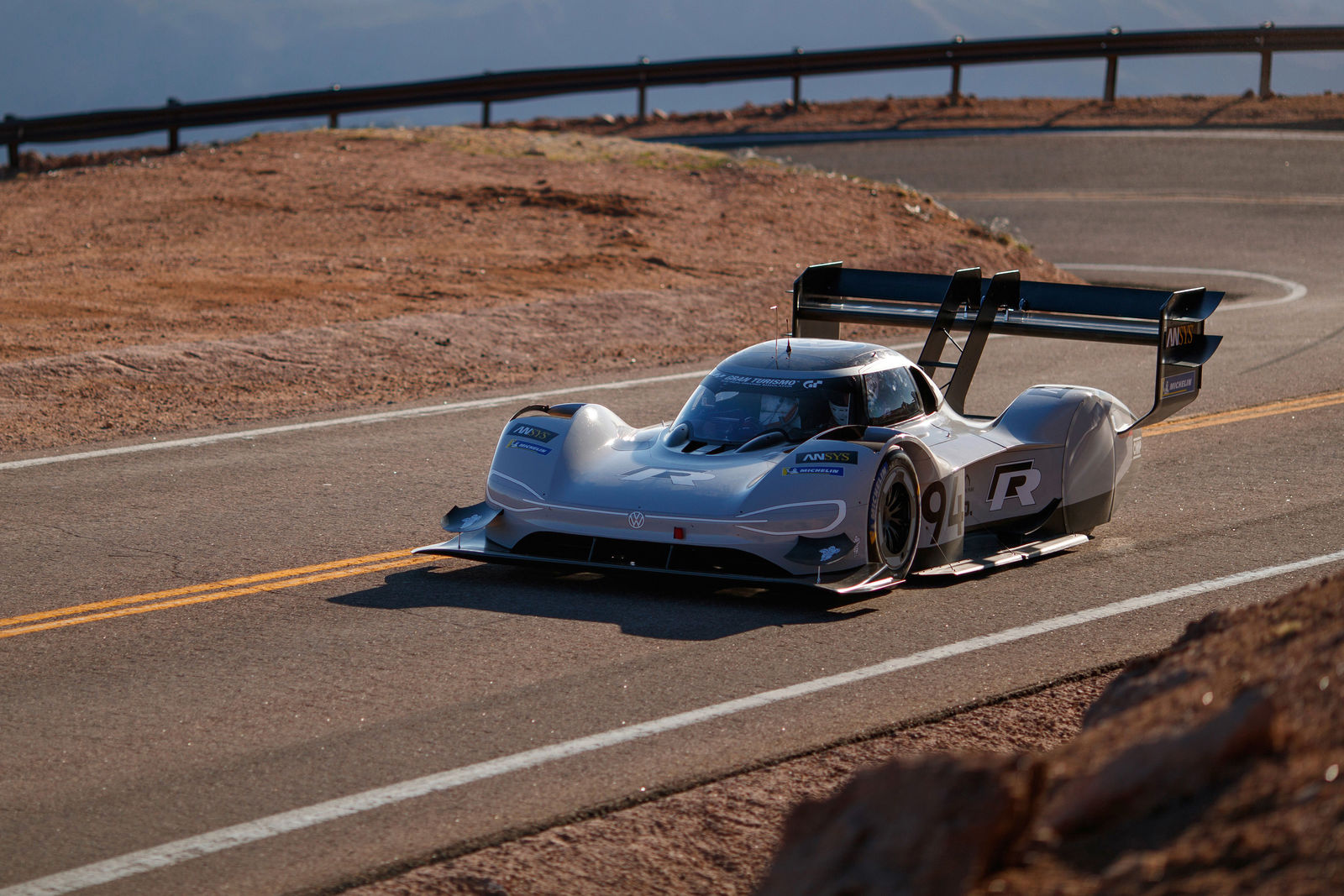 The clock is ticking: Just ten days to go until the start of the ID. R Pikes Peak

Final preparations are underway and the tension is mounting. Race week at the “Pikes Peak International Hill Climb” kicks off on Monday (18 June) with the Technical Inspection for participating vehicles in Colorado Springs. Attendance is compulsory for the ID. R Pikes Peak, the first fully-electric racing car from Volkswagen. The official practice session starts the next day. “The adrenaline levels will rise steadily until the race on Sunday,” says Romain Dumas, the three-time Pikes Peak winner who will be driving the ID. R Pikes Peak.

His mission at the “Race to the Clouds” is to set a new record in the class for electric vehicles. A mission that officially began on 18 October 2017. “In the beginning, we really did have a blank sheet of paper,” recalls Volkswagen Motorsport Director Sven Smeets. The decision to develop a fully-electric racing car to compete in the world’s most famous hill climb marked the start of a race against time. There were 250 days between the project announcement and the start of the race up Pikes Peak.

However, the I.D. R Pikes Peak is much more than just a racing car. The prototype is also a technological showpiece and a test lab on wheels for the electric production cars from the I.D. family, which Volkswagen will bring to the market from 2020. The aim of competing in this event is to learn lessons from motorsport that can be applied to production. That is why the Pikes Peak International Hill Climb was chosen. The 19.99-kilometre course climbs to a height of 4,302 metres, higher than the Ötztal Glacier Road in Austria – the highest paved road in Europe that is open to motor vehicles.

A range of vehicle types are allowed to compete on Pikes Peak, in the hill climb that has been taking place since 1916. Volkswagen will be competing in the “Unlimited” category, which means that the engineers can do almost anything they want. “We selected this class as it is the perfect stage for us to prove our technical expertise,” says François-Xavier Demaison, Volkswagen Motorsport Technical Director. While his team concentrated on the development of the chassis and the drivetrain for the I.D. R Pikes Peak, Volkswagen worked on the design of the bodywork. “It was our job to transfer the distinctive styling of the I.D. family to a really extreme, emotional racing car,” says Klaus Bischoff, Executive Director of Volkswagen Design.

The result is a unique racing car with powerful front and rear wings that are set up to generate maximum downforce. Two electric engines drive the front and rear axles, delivering system performance of 500 kW (680 hp). The electrical energy is stored in a lithium-ion battery that is split into two blocks, alongside and behind the cockpit. Around 20 percent of the energy required is generated on board, by energy recovered when braking, for example. “We made some fundamental discoveries regarding energy and charging management, which will certainly influence the development of the I.D. production vehicles,” explains Willy Rampf, who is bringing his extensive Formula 1 experience to bear on the project as a consultant for Volkswagen Motorsport.

The I.D. R Pikes Peak celebrated its world premiere on 22 April 2018, at the circuit in Alès in southern France. After extensive testing in Europe, Volkswagen Motorsport moved the base of operations for the hill climb to the US state of Colorado. Test drives took place on the original course on Pikes Peak to fine-tune the set-up for the race. “The I.D. R Pikes Peak is the best car I have ever driven up this mountain,” declared a visibly impressed Romain Dumas after the test. However, he added a cautionary note: “Everything has to go right during the race, we only have one chance.”

Serious work really begins for Dumas and the I.D. R Pikes Peak on Wednesday, 20 June. The start sequence for the race will be decided in a qualifying session. Volkswagen’s attempt to break the record for electric vehicles, which currently stands at 8:57.118 minutes, starts on Sunday (24 June) at 08:00 local time (16:00 CEST). The 24 motorbikes that have registered compete in nine classes. They will be followed by 67 cars in six classes. The starter with the best time in qualifying will be the first to head up the mountain.