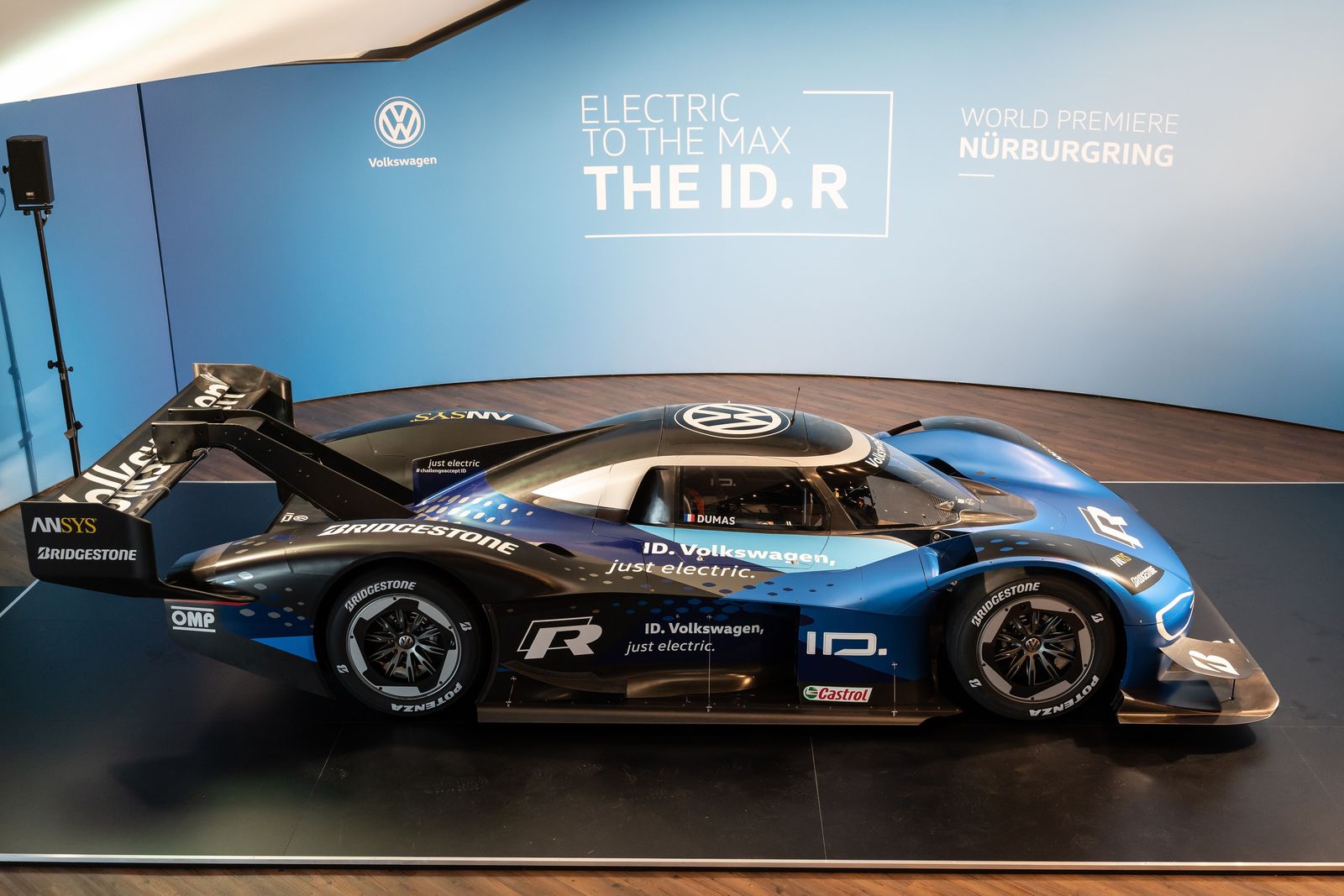 Volkswagen has presented the continuously developed version of the ID. R, the fully electric race car. The racing flagship of the future fully electric product family from Volkswagen is to set a new lap record for electric vehicles on the 20.832-kilometre-long Nordschleife. In order for driver Romain Dumas to undercut the until-now best time of 6:45.90 minutes, Volkswagen Motorsport has consistently and continuously developed the ID. R. On 25 April, the ID. R is to complete its first test on the Nürburgring-Nordschleife. Virtually speaking, the ID. R will already drive its first laps from today; for the first time, a race car will also be presented at the same time in a near-reality computer simulation that can be downloaded free of charge.

“The ID. R’s mission to be the spearhead of the fully electric ID. product family from Volkswagen continues in full force,” says Sven Smeets, Volkswagen Motorsport Director. “Once again, this time in 2019, the ID. R will demonstrate the great potential of electric drive, combining emissions-free technology with true emotion. The Nürburgring-Nordschleife is the next step on the journey of the ID. R, a car that provides a symbol of the future significance of electric drive in all of motorsport at Volkswagen. To see the ID. R take to this legendary race track for the first time will be a moment guaranteed to give you goose bumps.”

The 500 kW (680 PS) electric drive of the ID. R has been adapted to the world-unique track characteristics of the Nordschleife. Two lithium-ion battery blocks serve as energy storage on board the ID. R, which were constructed with expertise from Volkswagen’s production development and whose structure is comparable to the technology that is to be used in the future production vehicles from the ID. family.

New aerodynamics with technology from Formula 1
The most striking feature of the evolved version of the ID. R is the aerodynamics designed for a higher top speed. “Last year, the many-cornered hill-climb track and the thin air at Pikes Peak demanded maximum downforce,” explains François-Xavier Demaison, Technical Director of Volkswagen Motorsport. “On the Nordschleife lap, the ID. R will reach an average speed of more than 180 km/h – with a top speed on the straight of up to 270 km/h. We have therefore developed a completely new aerodynamic package with DRS (Drag Reduction System), known from Formula 1, as well as optimised the energy management, which controls the power output of the two electric motors and energy recovery under braking.”

Great development strides since the 2018 competitive debut
Romain Dumas knows the Nürburgring-Nordschleife like hardly anyone else. The Frenchman has already won the famous 24-hour race four times. Nevertheless, he will treat the track with a lot of respect as he goes into the upcoming first test run. “I have already driven the Nordschleife with the ID. R on the simulator countless times. But the true feeling from the incredibly high cornering speeds you only get when you’re on the actual track. The extent to which the ID. R has been continuously developed compared to 2018 is impressive. I can’t wait to finally drive the ID. R on the Nordschleife,” says Dumas.

Digital world premiere: drive the ID. R on the Nordschleife by yourself
But not only will Dumas have the opportunity to drive the ID. R on the Nordschleife. Racing fans can as of now compare themselves to the pro – virtually speaking, that is. On the occasion of the world premiere of the continuously developed ID. R, Volkswagen has launched an online racing simulation for the free-to-play racing simulator RaceRoom, in which the gamer himself/herself can take to the 20.832-kilometre Nordschleife in the ID. R and can compete with Romain Dumas – with the option to use virtual reality glasses as well. The computer vehicle model was created based on original ID. R data, while the engineers from Volkswagen Motorsport have given the game developers deep insights into the driving dynamics of the electric racing car in order to make the driving experience as realistic as possible on a home computer. All information can be found here: www.raceroom.com/volkswagen

Press booklet for download: “Electric to the max – the record-chasing ID. R”