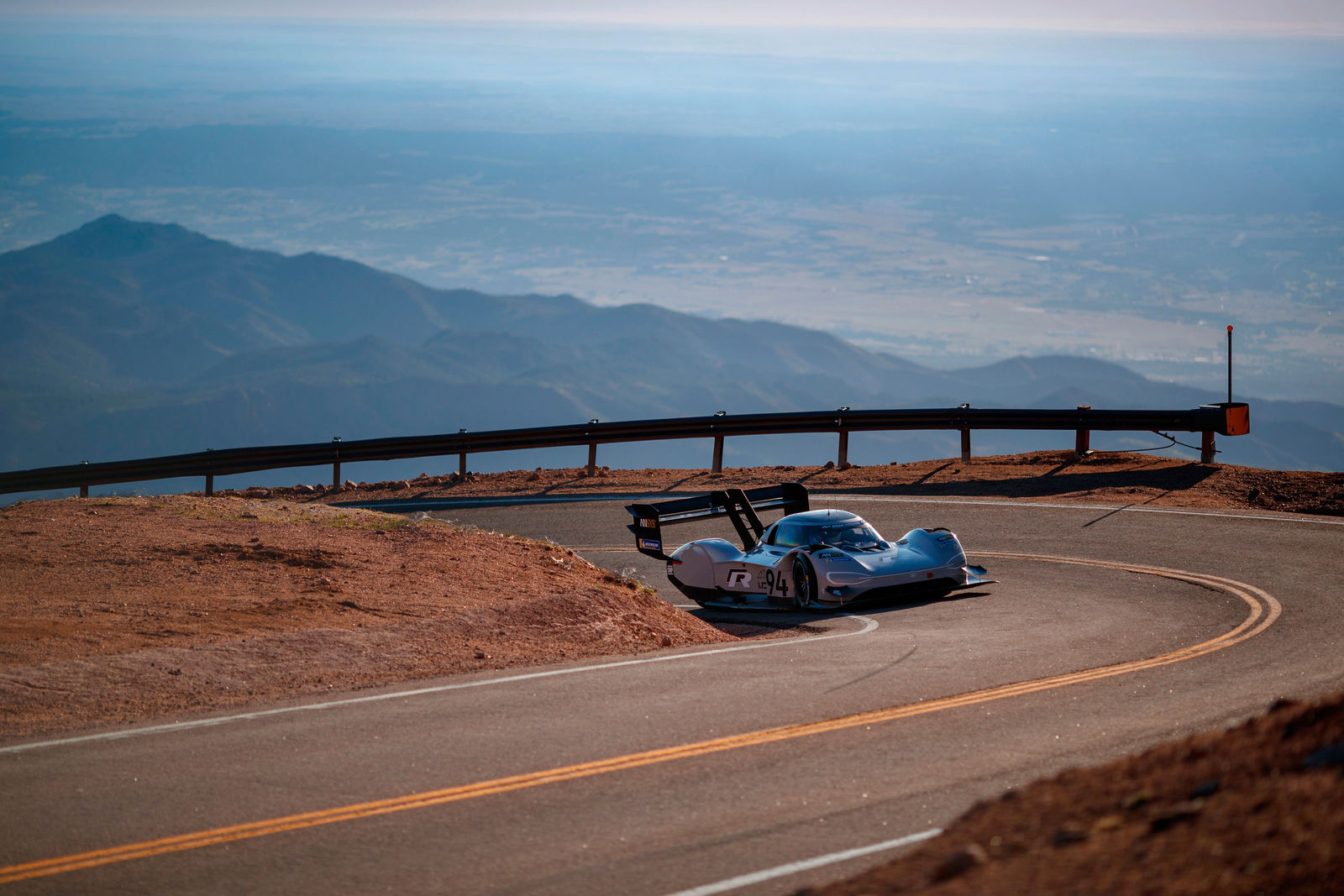 Highly-sophisticated and highly efficient – the drivetrain technology in the ID. R Pikes Peak

The ID. R Pikes Peak that Romain Dumas will be driving on 24th June 2018 at the “Pikes Peak International Hill Climb” boasts the most sophisticated powertrain ever developed by Volkswagen Motorsport. “We are breaking new ground with the ID. R Pikes Peak: This is the first time ever that Volkswagen will be competing in a race with a fully-electric car. Alongside the elaborate aerodynamic concept and the special requirements for the sports car chassis, the development of the electric drivetrain was the greatest challenge,” explains François-Xavier Demaison, Technical Director at Volkswagen Motorsport.

Volkswagen’s first fully-electric racing car has two interlinked, integrated lithium-ion battery blocks on board, located to the right and left of the cockpit. They feed energy to two separate high-performance electric engines for the front and rear axles. Together, they provide performance of 500 kW (680 PS). The actual performance level is controlled electronically, depending on the situation on the track. This means that the neutral driving behaviour ideal for a racing car is achieved when accelerating out of a tight turn, for example, as the front wheels also have to transmit steering forces to the track in addition to the drive power. When Romain Dumas depresses the accelerator or brake pedal during the world’s most famous hill climb, the movements are not transmitted by cables, but digitally with e-gas and brake-by-wire, a braking system with electronic signal transmission.

The I.D. R Pikes Peak itself produces up to 20 per cent of the electrical energy required for the 19.99-kilometre race. The engines, which otherwise drive the car, function as generators under braking. This recovery process allows them to generate power that flows back to the battery. This procedure also contributes part of the brake performance. A conventional brake system provides the additional deceleration required. The brake-by-wire system in the I.D. R Pikes Peak is the prerequisite for this. “The interplay between recovery and mechanical braking is controlled by electronic systems that the driver does not even notice,” explains Marc-Christian Bertram, Head of Electrics/Electronics at Volkswagen Motorsport.

Volkswagen Motorsport jumped in at the deep end with the drivetrain technology in the I.D. R Pikes Peak. “It was a massive challenge for our whole engineering team. We had no experience of electric drivetrains to call on in a racing context, a very short timeframe of seven months for development, and we were only able to test on the actual route at the end of May,” summarizes Bertram. Some tension will remain in the air until race day, when Dumas races up Pikes Peak in pursuit of a new record in the category for electric vehicles. The current record stands at 8:57.118 minutes.

The Volkswagen Motorsport engineers can be sure that they have provided the best possible preparation. During development of the batteries for the I.D. R Pikes Peak, they also benefited from the know-how of the technical departments for e-mobility at the parent company in Wolfsburg and at the Preproduction Center (VSC) in Brunswick. “Technical development at Volkswagen has workshops and laboratories for performing stress tests on batteries,” explains François-Xavier Demaison. First of all, we ran tests with individual battery cells and modules. With a racing car, you have to be aware of special requirements for cabling and insulation. Volkswagen already has plenty of experience of high-voltage technology. It was a great help to be able to make use of that.”

The engineers did more than just conform to the strict safety standards of the world motorsport governing body FIA for Formula E and the hybrid cars in the LMP1 category, which compete in the Le Mans 24-hour race. “During development of our battery systems, we used the strict testing procedure from production development,” adds Bertram.

In any case, the head engineer at Volkswagen Motorsport was keeping an eye on what his colleagues from production development were working on, as they concentrated on the future I.D. family. The first Volkswagen series with a fully-electric drivetrain is due to hit the market from 2020 and does not just interest Marc-Christian Bertram while he is at work. “I have now been working on the I.D. R Pikes Peak racing car for months, but sadly I probably will never be able to drive it. That is why I am already looking forward to my first trip in one of the I.D. production models.”