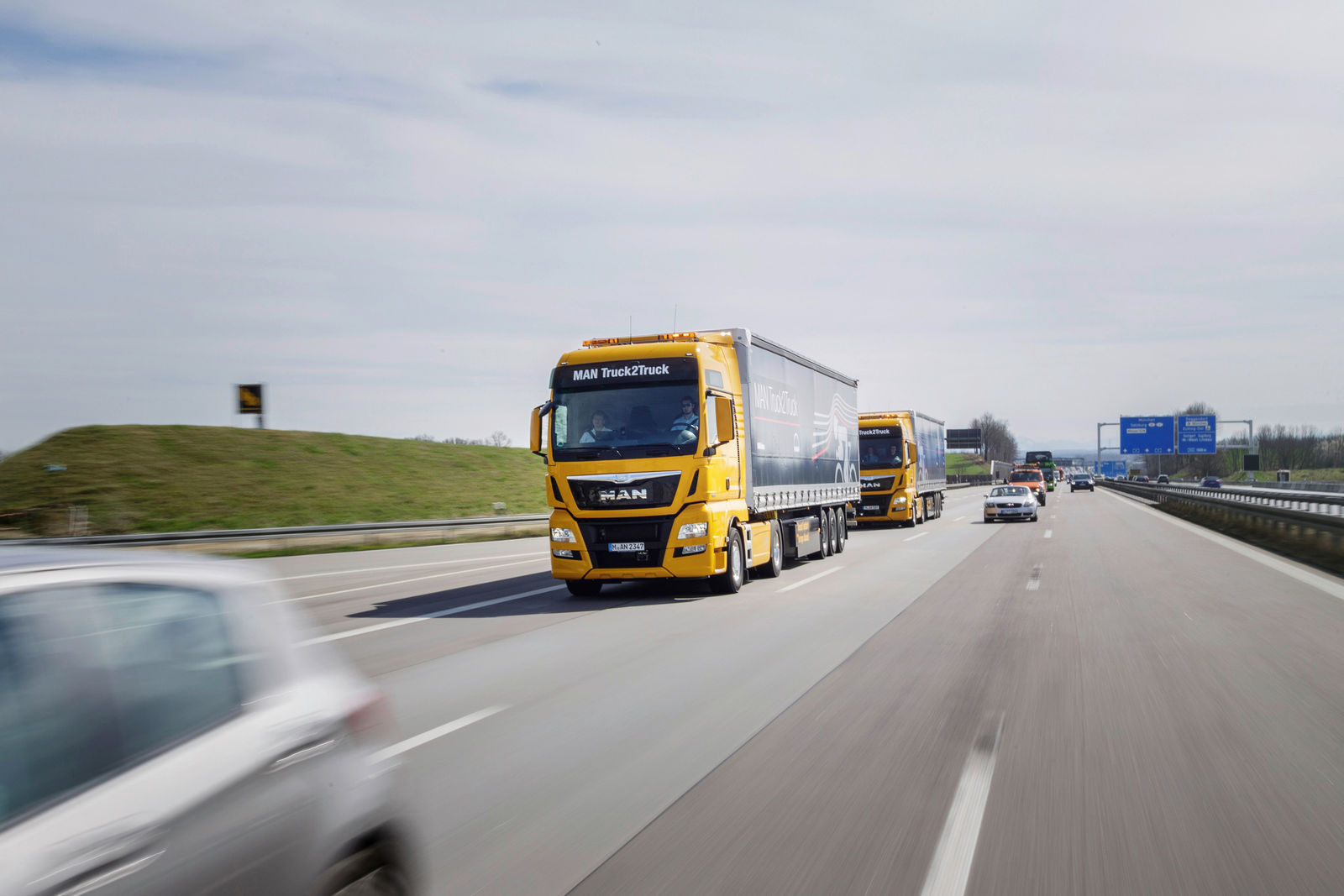 Goods transport of the future: MAN and Scania rely on digitally connected trucks

Transporting goods on highways could soon become even more efficient and safe thanks to digitally connected semitrailer tractors. To demonstrate this, MAN and Scania will participate in the "European Truck Platooning Challenge" - a test drive for trucks that are connected in platoons via digital data transfer. In this case, two or more trucks drive behind each other at a small distance making optimum use of the slipstream of the vehicle driving in front. The driver in the first vehicle sets the direction and speed. The other trucks that follow are semi-automated. This reduces diesel consumption and CO2 emissions by up to ten percent.

The "European Truck Platooning Challenge" is an initiative within the framework of the Dutch government that currently holds the EU Presidency. With the support of the ACEA, the European Automobile Manufacturers Association, the Netherlands want to increase semi-automated driving and driving in a convoy in Europe.

Scania started with three vehicles from Södertälje, Sweden on March 29. The route went via the Öresund Bridge to Denmark and then on to Germany and Belgium to the Netherlands. Today, MAN is starting with a platoon from Munich bound for Rotterdam, the destination point of the rally. Together with vehicles from other European manufacturers, they will arrive there on April 6.

MAN in Munich received its start signal from the German Transportation Minister Alexander Dobrindt. "Platooning is a good example of combining automation and connectivity. The interaction of vehicle to vehicle communication with innovative features such as automatic distance control will improve road safety and significantly improve traffic flow while increasing capacity. This brings benefits for the driver and the environment. Before today's pioneering trip, MAN tested its digitally connected truck on the digital highway test field on the A9 – and has thus brought  its innovations from the laboratory to the road", Mr. Dobrindt said.

Andreas Renschler, member of the Board of Management of Volkswagen AG and CEO of Volkswagen Truck & Bus GmbH, has put digital innovations right on top of his agenda. "Platooning demonstrates very clearly how much the transportation sector is changing: Tomorrow's trucks are fully connected. This increases safety and efficiency." Platooning does not require any technological equipment along the route beyond the vehicles' wifi connection. But Mr. Renschler stressed the necessity of a suitable infrastructure for further applications: "In future it will no longer suffice to simply build roads and restore bridges. We will also need mobile high-speed Internet alongside these routes as soon as possible. Our highways have to also become data highways in the future!"

Networked trucks introduce new level of logistics
Networked trucks are at the core of MAN and Scania's development co-operation. Together, they already have more than 200,000 connected trucks that operate for customers. Thanks to the collected data, the network allows customers to use digital services that make the operation of their fleet more efficient and profitable. Volkswagen Truck & Bus is at the forefront in Europe when it comes to digitally connected trucks.

To further strengthen this position, Volkswagen Truck & Bus will make an average three-digit million investment for digital innovation in the next five years. With MAN, it is evident how important networks are since the Chief Executive Officer of MAN Truck & Bus AG, Joachim Drees, created a separate division — "Telematics & Digital Solutions." Scania, too, has recently bundled its activities in this area in a separate department called "Unit X." At MAN and Scania, a total of 300 employees are currently working on developing digital innovations for customers but also on new business models that crop up in the process.

How platooning works
Platooning is a vehicles system for road traffic where two or more truck-trailer combinations can drive behind one another at a small distance thanks to current technological driver assistance and steering systems as well as car-to-car communication. This even increases traffic safety instead of affecting it. The distance between the vehicles is around ten meters or about half a second in driving time.

All vehicles in the platoon — all semitrailer tractors — are connected with a so-called electronic drawbar. The first vehicle sets the direction and speed on the route. The necessary steering commands are forwarded to the following vehicles via car-to-car communication. These also send data back to the tractor-trailer. The car-to-car communication runs on a WLAN connection at a frequency of 5.9 GHz.

From a technical point of view, the platooning concept could be introduced in Europe by 2020. Its implementation, however, depends on the necessary adjustments of legal frameworks and thus requires a high level of collaboration of all parties involved. This also includes the coordination of different traffic rules and legislation in EU countries. 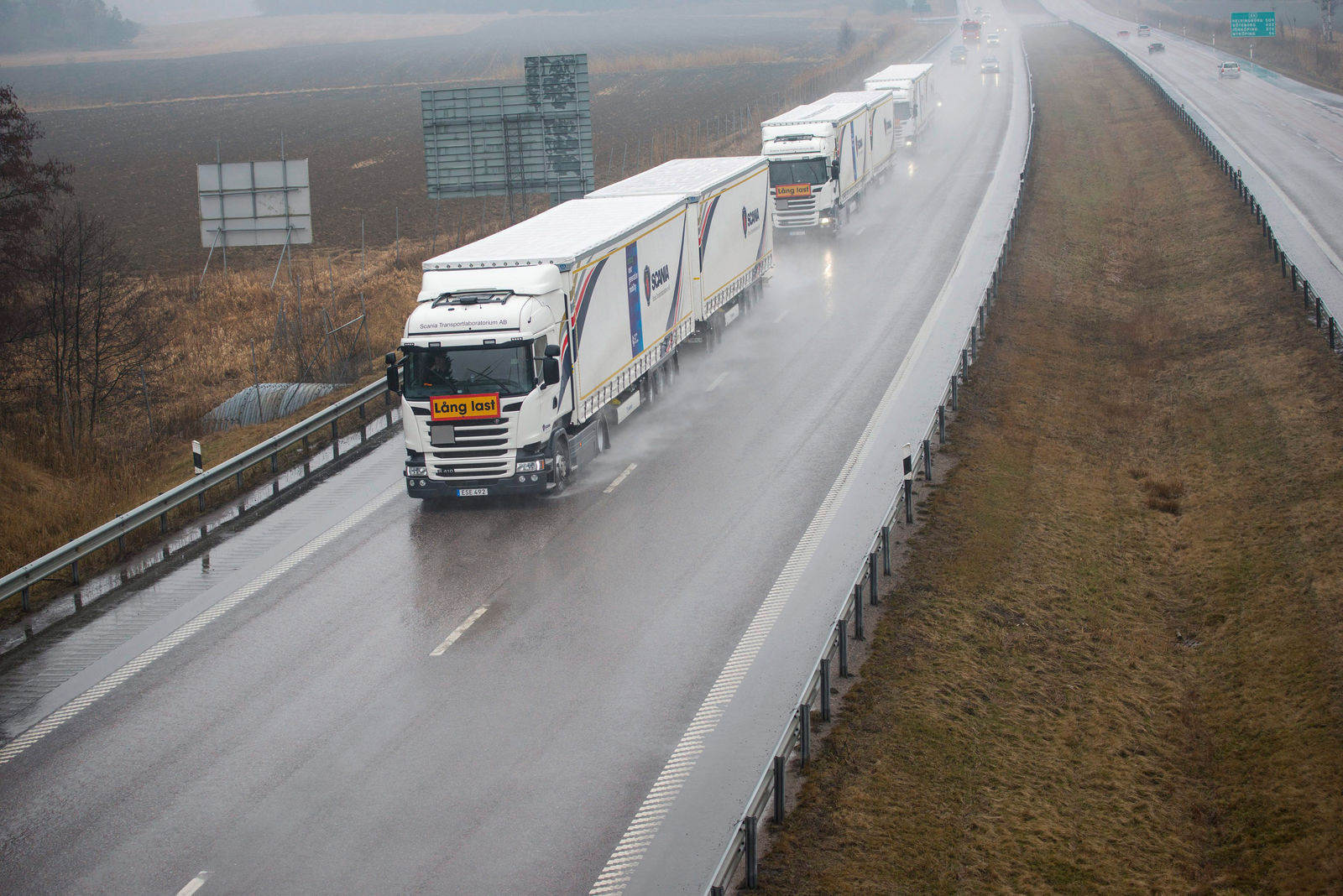