Go-ahead for new Trinity plant:
Milestone for the future of the Wolfsburg production location

Volkswagen has reached another milestone in its transformation journey: A new manufacturing facility for the Trinity electric model is to be built close to the main plant in Wolfsburg, with investment totaling some €2 billion. The Group’s Supervisory Board passed a resolution to this effect today. The new Trinity factory is a key component of the largest modernization program in the history of Volkswagen’s main location. Construction work in the Warmenau district of Wolfsburg is to begin as early as spring 2023 and will take account of building and environmental law. In so doing, the new site will meet high environmental standards. To that end, Volkswagen will engage in an intensive exchange with the relevant authorities as well as with stakeholders. The net carbon-neutral Trinity model, built using the most innovative manufacturing methods, is to roll off the assembly line from 2026. The new facility with its optimized processes will therefore become a model for the gradual transformation of production at the main Wolfsburg plant along with all other Volkswagen manufacturing sites worldwide.

“The decision by the Supervisory Board is an important milestone for the transformation of our brand and the future of the Wolfsburg production facility. We are thus strengthening and sustaining the competitiveness of the main plant and giving the workforce a robust long-term perspective,” Volkswagen CEO Ralf Brandstätter said. “We are setting benchmarks in the automotive industry with Trinity and the new factory and turning Wolfsburg into the global lighthouse for cutting-edge and efficient vehicle production. This reaffirms that the economic transformation of Germany as a center of industry can be achieved.”

Lower Saxony’s Minister President Stephan Weil commented: “The decision by Volkswagen to build a state-of-the-art manufacturing facility for environmentally-friendly, digitized electric vehicles in Wolfsburg-Warmenau is a clear commitment to Lower Saxony as a center of industry. Trinity is now being added to the list of enormously successful VW vehicles, from the Beetle through to the Golf – a hattrick for Lower Saxony! Step-by-step, production capacity throughout Lower Saxony is to become carbon-neutral. Environmental protection is a top priority in automobile production, as elsewhere.”

Daniela Cavallo, Chairwoman of the General and Group Works Councils, said: “Today’s decision marks a historic moment for Wolfsburg. The very roots of our company remain the Group’s powerhouse and become even more important.” In addition, Cavallo highlighted the link between the decision on Trinity and the new Campus Sandkamp also planned for the main plant. The campus will, for example, develop the Group’s future highly scalable SSP vehicle platform, to be used for the first time in the volume segment for the Trinity project. Cavallo went on to say: “The Trinity factory will become the blueprint for the existing main plant and for Volkswagen in general. We have also agreed that we will expand battery, charging and digitalization activities here in Wolfsburg, centered around Trinity. All this safeguards employment and brings coherence to shaping the transformation in Wolfsburg.”

Lower Saxony’s Minister of Economic Affairs, Dr. Bernd Althusmann, added: “The Volkswagen Group’s decision on the Trinity site is a further positive signal for the automotive future ‘made in Lower Saxony’. The state-of-the-art production facility will combine all areas of e-mobility: From the new electric platform through to software applications and groundbreaking assistance systems.” 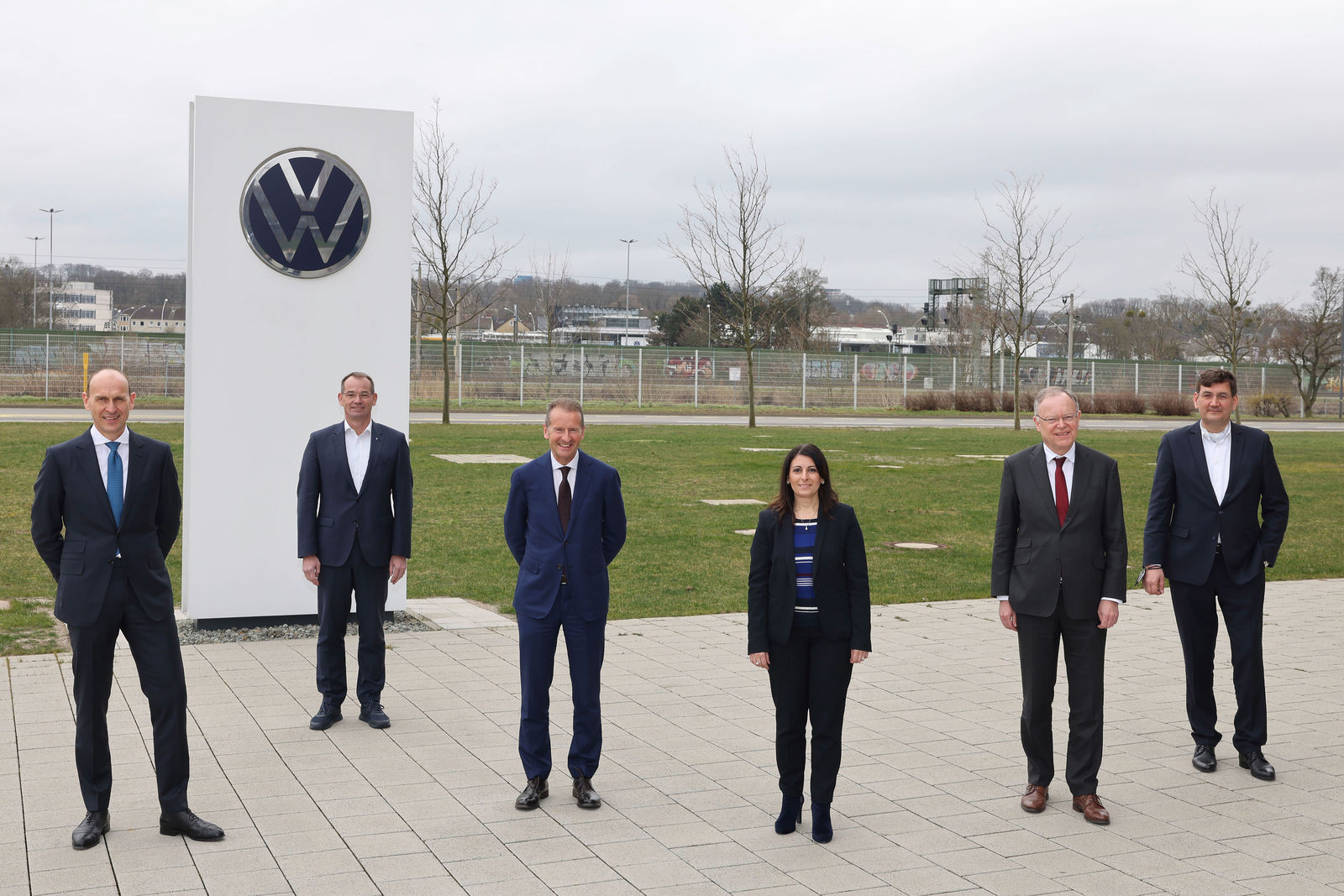 Volkswagen has reached another milestone in its transformation journey: The new Trinity factory is to be built in Wolfsburg-Warmenau. From left to right: Ralf Brandstätter, Dr. Christian Vollmer, Dr. Herbert Diess, Daniela Cavallo, Stephan Weil and Gunnar Kilian.

The Trinity project is the new lodestar for Volkswagen’s all-electric fleet and the crystallization point for the brand’s ACCELERATE strategy: A much shorter charging time and a range of over 700 kilometers. Net carbon-neutral. Equipped with the Group’s state-of-the-art software. Technically ready for autonomous driving, Level 4. The foundation is the Group’s new SSP platform. Over its lifetime, more than 40 million vehicles are projected on this basis. The platform debuts in the volume segment with Trinity.

Volkswagen also intends to set standards in Trinity production when it commences in 2026, and is aiming for a production time of 10 hours per vehicle. The key: Fewer variants, fewer components, more automation, leaner production lines and new logistic concepts. Campus Sandkamp creates the framework for optimal, time-efficient collaboration among all areas of Volkswagen through modern working practices. Volkswagen is investing €800 million in the most advanced research and development center in Europe to drive the future of mobility in the coming years. There are plans to integrate modern electric vehicle production based on the SSP platform and modelled on the Trinity facility at the existing main plant by 2030.

Dr. Christian Vollmer, Member of the Board of Management of the Volkswagen brand responsible for Production, commented: “We are focusing on innovative and sustainable manufacturing concepts. Building a new factory in Warmenau also gives us the opportunity to make the existing factory fit for the future, step-by-step and from top to bottom. Trinity stands for a completely new kind of thinking, production, collaboration. It takes courage to shape the future. This is how Wolfsburg will become the yardstick for innovative production concepts – for Volkswagen and the entire industry.”

Deciding factors for the choice of location: Efficiency and minimal impact on ongoing production

Today’s decision to build the new factory on a greenfield site was preceded by an exhaustive analysis of several options, including an intensive review of the feasibility to locate Trinity production within the Wolfsburg plant. Apart from higher efficiency in the medium term, factors favoring the construction of a new factory in Warmenau include in particular the fact that this option does not disrupt ongoing series production or ramp-ups of important models such as the Tiguan and Tayron or the Golf facelift scheduled for the coming years.

Last December, the Supervisory Board of Volkswagen AG already confirmed production of the Trinity electric model at the Wolfsburg location under Planning Round 70. However, the transformation of the main plant into a manufacturing facility for electric vehicles already begins much earlier: Volkswagen will start building the ID.3 in Wolfsburg in 2023 to meet high demand for the brand’s electric models.

With Trinity, the company is accelerating the big issues of the future: Volkswagen is making autonomous driving available to many people by 2030

With its ACCELERATE strategy, the Volkswagen brand is systematically preparing for the profound changes in the automotive industry in good time. Just as Volkswagen resolutely led the way with its global electric offensive, the company is now accelerating the other big issues of the future: The integration of software into the vehicle and the digital customer experience will become crucial core competences. In implementing data-based business models, Volkswagen is seeking to attract new groups of customers and tap additional sources of income. Volkswagen will also be making autonomous driving available to many people by 2030.

The Trinity project is an important pillar in this context: Trinity represents the next generation of electric vehicles at Volkswagen. The foundation is the future SSP platform that will enable Level 4 autonomous driving and will set new standards for electrification and the digitalization of mobility.