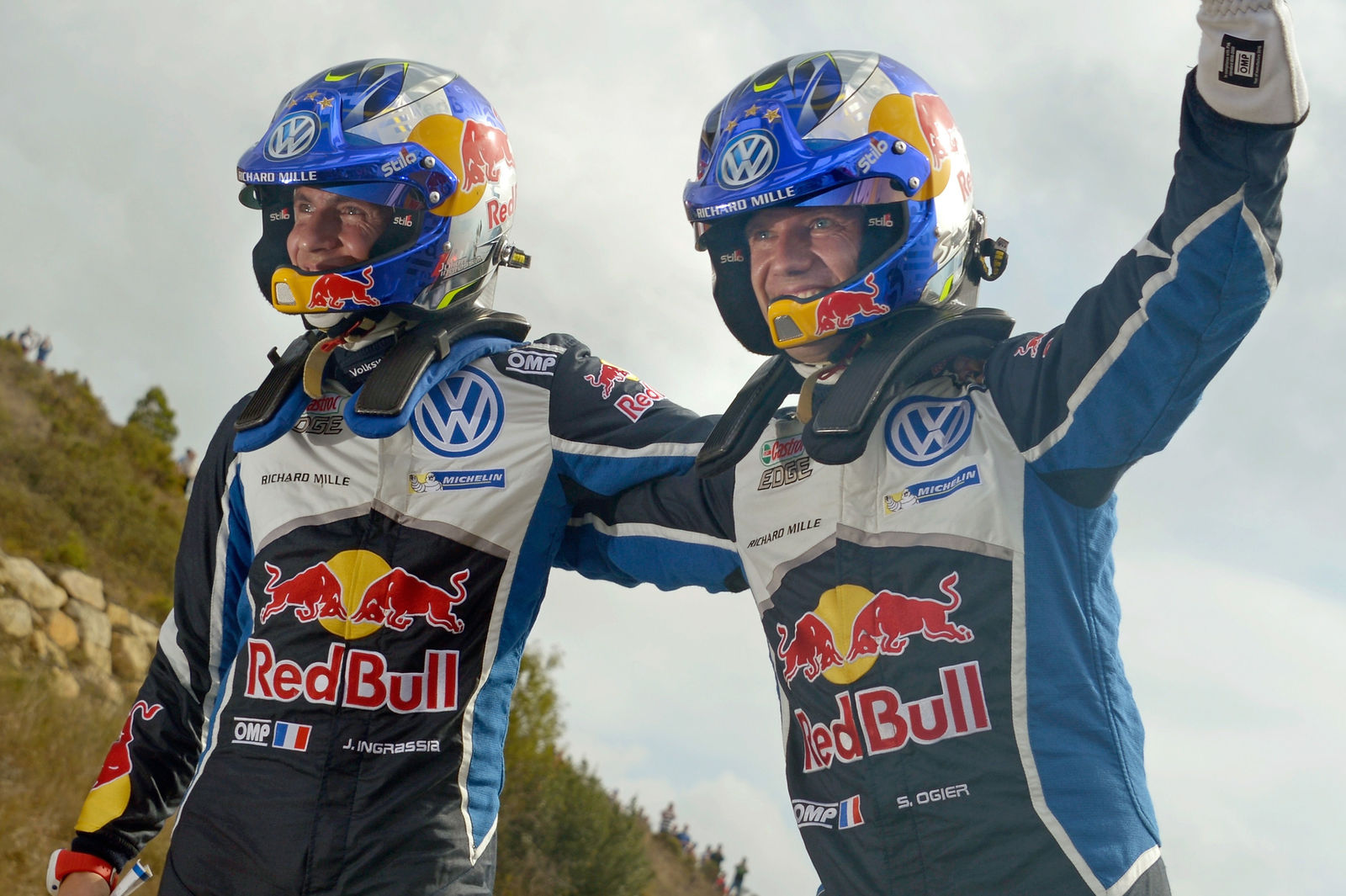 Sébastien Ogier/Julien Ingrassia (F/F) were crowned World Rally Champions for the fourth time in a row after taking victory at the Rally Spain. They guided their Volkswagen Polo R WRC to a fifth win of the season in Catalonia, finishing ahead of Dani Sordo/Marc Martí (E/E, Hyundai) und Thierry Neuville/Nicolas Gilsoul (B/B, Hyundai). Their ninth podium in eleven races triggered wild celebrations. The Frenchmen can no longer be caught at the top of the overall standings in the 2016 FIA World Rally Championship (WRC). Team-mates Andreas Mikkelsen/Anders Jæger (N/N) went into the Rally Spain as their closest rivals in the title race, but the Norwegians' hopes of winning the championship were dashed when they were forced to retire from the rally. Eighth place in the Manufacturers' classifications for Jari-Matti Latvala/Miikka Anttila (FIN/FIN) means Volkswagen is well-placed to claim its fourth Manufacturers' title in a row next time out at the Rally Great Britain.

Kankkunen, Mäkinen and Ogier – up there with the biggest names in rallying

952 days in a row at the top of the table: Sébastien Ogier is only the third World Rally Champion to be crowned champion four years in a row in the pinnacle of rallying, and the fourth four-time world champion in the history of the FIA World Rally Championship (WRC). He is now on a par with Juha Kankkunen (FIN) and Tommi Mäkinen (FIN). Only his compatriot, nine-time world champion Sébastien Loeb (F) has more titles to his name.

Four titles, each wrapped up with a win and races to spare – the Ogier/Ingrassia way

Eleven rallies, nine podium finishes, five of which were wins: victory number 37 of Sébastien Ogier and Julien Ingrassia's careers, their 30th with Volkswagen, tasted particularly sweet. The four-time world champions remained true to form, securing the title with a win for the fourth time in a row. They previously wrapped up the 2013 title at the penultimate rally in France, before achieving the same feat in Spain in 2014. In 2015, they claimed an extremely hard-fought victory at the Rally Australia to win the title before the end of the season. Victory at the 2016 Rally Spain – the only rally on the WRC calendar to be held on both gravel and asphalt – was also contested passionately.

The masterstroke: irresistibly quick and considered at the Rally Spain

The Rally Spain in Catalonia developed into a thrilling battle for the lead between local heroes Dani Sordo/Marc Martí and eventual winners Ogier/Ingrassia. The weather added to the challenge on the opening day, which was held predominantly on gravel. Ogier/Ingrassia lost 17.0 seconds to Sordo/Martí on roads that were muddy in places and drying in others. However, they bounced back on Saturday, the first of two days on asphalt, to convert this deficit into a 5.8-second lead, with wins on five of the eight special stages. Ogier extended his lead on Sunday and ultimately finished 15.6 seconds clear of the rest of the field.

Setback for Mikkelsen, Latvala is back

In contrast, Mikkelsen/Jæger and Latvala/Anttila in the second and third Polo R WRCs suffered disappointments. Friday came to a premature end for Latvala/Anttila, who were running third in extremely wet and slippery conditions when they hit a barrier and were forced to retire. However, they returned under Rally 2 regulations on Saturday and Sunday to win five stages and score valuable points for Volkswagen in the race for the Manufacturers' Championship courtesy of eighth place in the Manufacturers' classification. Their Volkswagen team-mates Mikkelsen/Jæger were unable to return under Rally 2 regulations: the pair second in the world championship got out of shape in a fast right-hand corner on Saturday – also whilst running third – skidded into a barrier and rolled. The Polo R WRC could not be repaired with the materials on site.

Mikkelsen/Jæger remain second in the overall standings behind their team-mates Ogier/Ingrassia. After the Rally Spain, the Norwegian Volkswagen duo is level on points with Neuville/Gilsoul. However, they keep their noses in front thanks to better individual results. Latvala/Anttila head to the final two rallies of the season in Great Britain and Australia sixth in the world championship. Volkswagen travels to Great Britain with a 62-point lead in the Manufacturers' Championship. As such, the team has a great chance of winning the world championship title for the fourth time in a row, regardless of other results. To do so, Volkswagen must take a lead of 43 points into the Rally Australia.

The icing on the cake: Latvala ahead of Ogier on the Power Stage

Latvala/Anttila enjoyed a good end to the Rally Spain. They clocked the fastest time on the closing Power Stage and were rewarded with three bonus points. Ogier/Ingrassia finished second to complete the Volkswagen success in this discipline. Victory has now gone to the Wolfsburg-based manufacturer on 38 of the past 49 Power Stages.


Quotes after day three of the Rally Spain

Sébastien Ogier, Volkswagen Polo R WRC #1
"I feel fantastic! The fourth world championship title for Julien and me, it is impossible to describe how this feels. It is an honour to be mentioned in the same breath as such big names as Kankkunen and Mäkinen. I would like to say a huge thank you to our team at Volkswagen. Without them, Julien and I would not be here today. They do a fantastic job all year and we have had a perfect car all season. I had great fun at the wheel of the Polo R WRC once again this weekend. The tension ahead of the closing Power Stage was obviously greater than usual, given the fact that we were within touching distance of the title, and bearing in mind the mistake we made last year. But we've done it. Despite the more difficult regulations, and despite the strong opposition. I am more proud of this title than ever before. It is now time to celebrate in style with a team and my wife – and when I get home I can show my young son Tim the trophy that daddy won. I dedicate this world championship title to him."

Jari-Matti Latvala, Volkswagen Polo R WRC #2
"Congratulations to my team-mate Sébastien Ogier on his fourth Drivers' title. That puts him in the same league as my Finnish compatriots Tommi Mäkinen and Juha Kankkunen. That is a fantastic effort, not only from him, but from the entire Volkswagen Motorsport team. For me, the Rally Spain, as has so often been the case this year, was over far too soon. After the suspension damage on Friday, we had no chance of getting ourselves back in contention. Despite this, we did manage to win some special stages and eventually managed to contribute four points towards the Manufacturers' Championship. Perhaps we will be able to wrap up this title at the next rally in Great Britain. That will definitely be the goal."

Andreas Mikkelsen, Volkswagen Polo R WRC #9
"Congratulations on the title and respect for this victory to our team-mates Sébastien Ogier and Julien Ingrassia. Anders and I are pleased for them. They set the benchmark again in 2016. For us personally, the Rally Spain obviously did not end as we would have hoped. After victory last year, we wanted to do well again here and certainly to extend our lead over third place in the world championship. However, that was not to be. We came into a right-hander too quickly on Saturday, drifted wide, hit the barriers and rolled. That was 100 per cent my mistake. The battle for second place in the world championship is now wide open again, and we will have to be at our very best in the remaining rallies to achieve the goal we have been aiming for since the start of the season. We will work hard to make that possible."

Sven Smeets, Volkswagen Motorsport Director
"To be crowned world champions for the fourth time with a win – that is outstanding. Today is a great day for Sébastien Ogier, Julien Ingrassia and the whole Volkswagen team. They have been extremely consistent and impressive all season. Nine podium finishes, five of them wins, speak for themselves. So does the fact that they have now led the World Rally Championship but just short of 1,000 days in a row. We are very proud of the fastest Volkswagen drivers in the world. We will certainly celebrate in style today. Furthermore, the result here in Spain puts us in a good position in the battle for the Manufacturers' title. We could now also win the title for the fourth year in a row in Wales in two weeks' time, regardless of other results. That is obviously the goal."

And then there was also …

… the "Breakfast of Champions". Sébastien Ogier started his big day, on which he would be crowned World Rally Champion for the fourth time, by polishing off his usual omelette for breakfast. This was his 200th in total since he started driving the Polo R WRC for Volkswagen.

*Subject to the official publication of the results by the FIA. 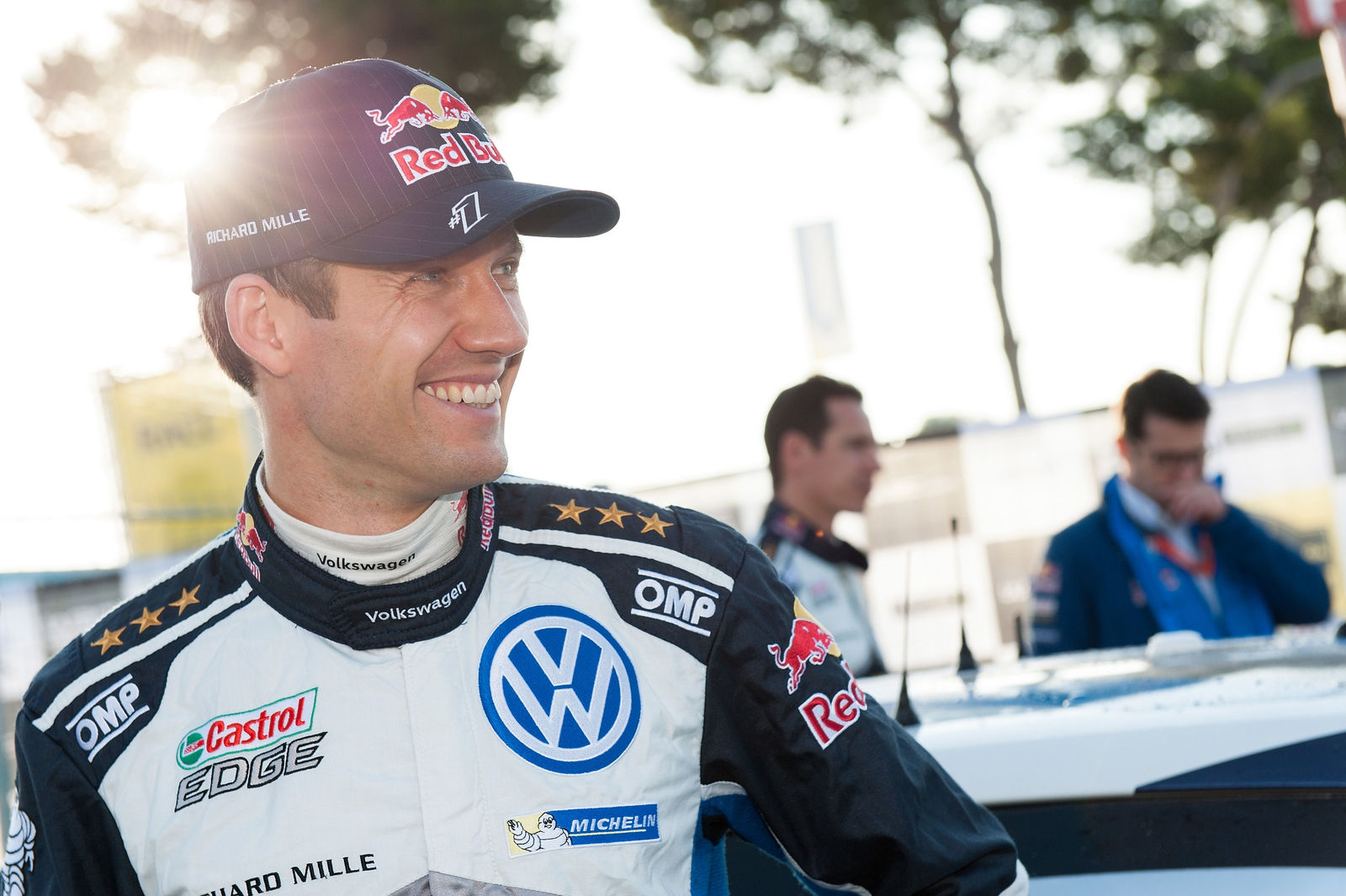 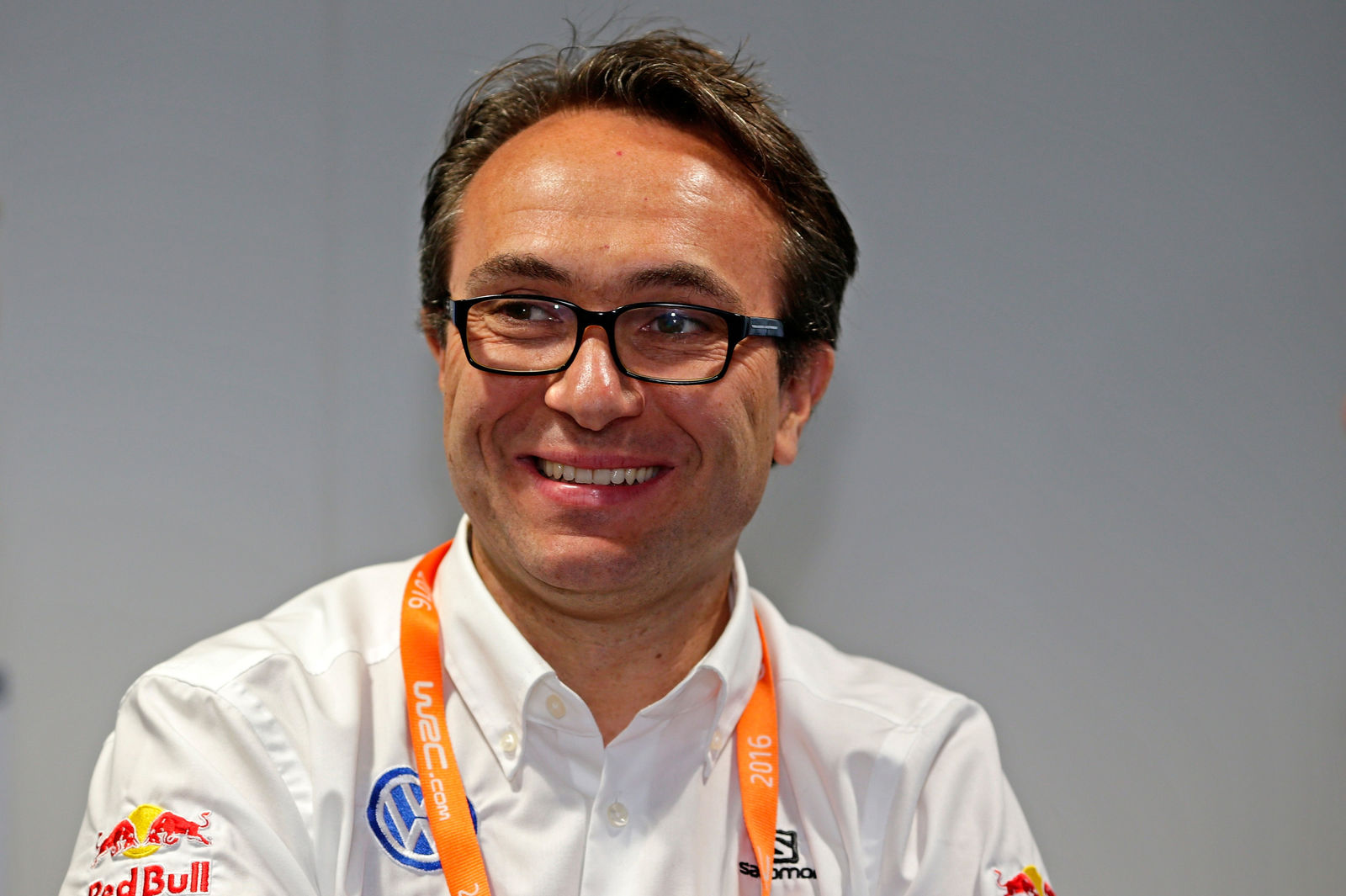 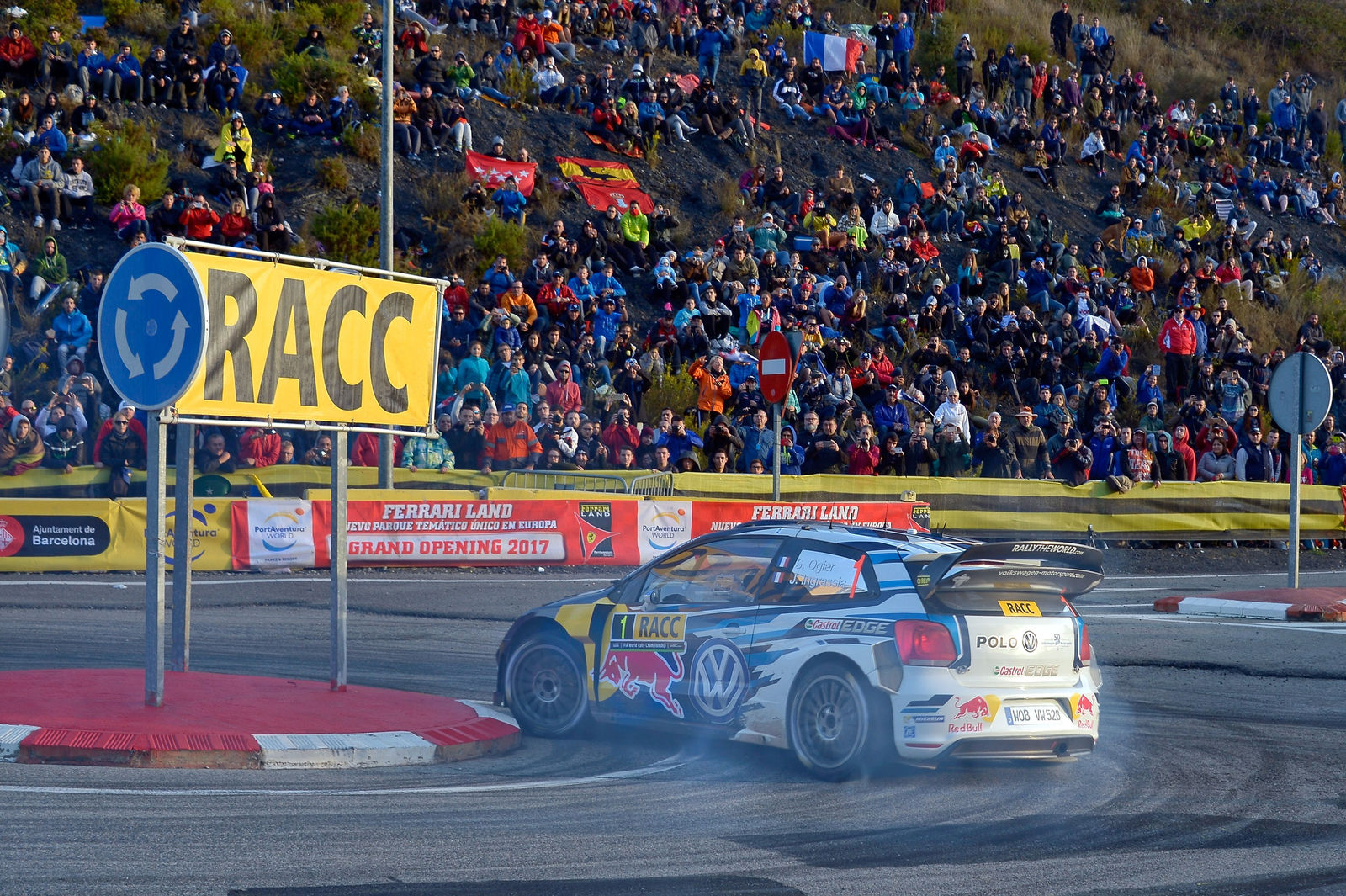